Editor’s note: The term “Inuit” is broadly used to refer to Native peoples from the circumpolar Arctic in Alaska, Canada, and Greenland. Though “Iñupiaq” and “Yupik” are the comparable terms for Native Alaskans, the use of “Inuit tattoos” in this article reflects the language commonly used by Native tattoo artists throughout the Arctic region.

Holly Mititquq Nordlum grew up admiring her great-grandmother’s tattoos. Though the women in her Iñupiaq village in Arctic Alaska had not been tattooed for generations, photographs of the matriarch hung in the homes of all Nordlum’s relatives, her traditional ink on full display.

“I was always curious about our tattoos,” says Nordlum, recalling the few times she saw them in person as a girl. The daughter of a pilot, Nordlum remembers being encouraged to ask questions when her father flew in Native Alaskan elders from Wainwright or Port Hope, awed by the markings the women wore on their faces and bodies. “That must have stuck with me,” she says.

Now, Nordlum sports the tattoos her great-grandmother once did. For the past five years, she’s worked as a traditional tattoo artist in Anchorage, joining a league of Native women across the circumpolar Arctic working to revive the practice and redefine what it means today.

Native Arctic women tattooed one another for millennia before Western colonizers abolished the custom. These women earned their ink: Girls got their first tattoos when they started menstruating, often in the form of lines running down the chin. Additional stripes were drawn when a woman mastered a new skill or reached a milestone, like learning to sew a seal-skin parka or giving birth.

“Face tattoos were celebrations of a woman’s life,” says Nordlum, and advertisements of their womanhood. Less visible tattoos might have served other purposes. 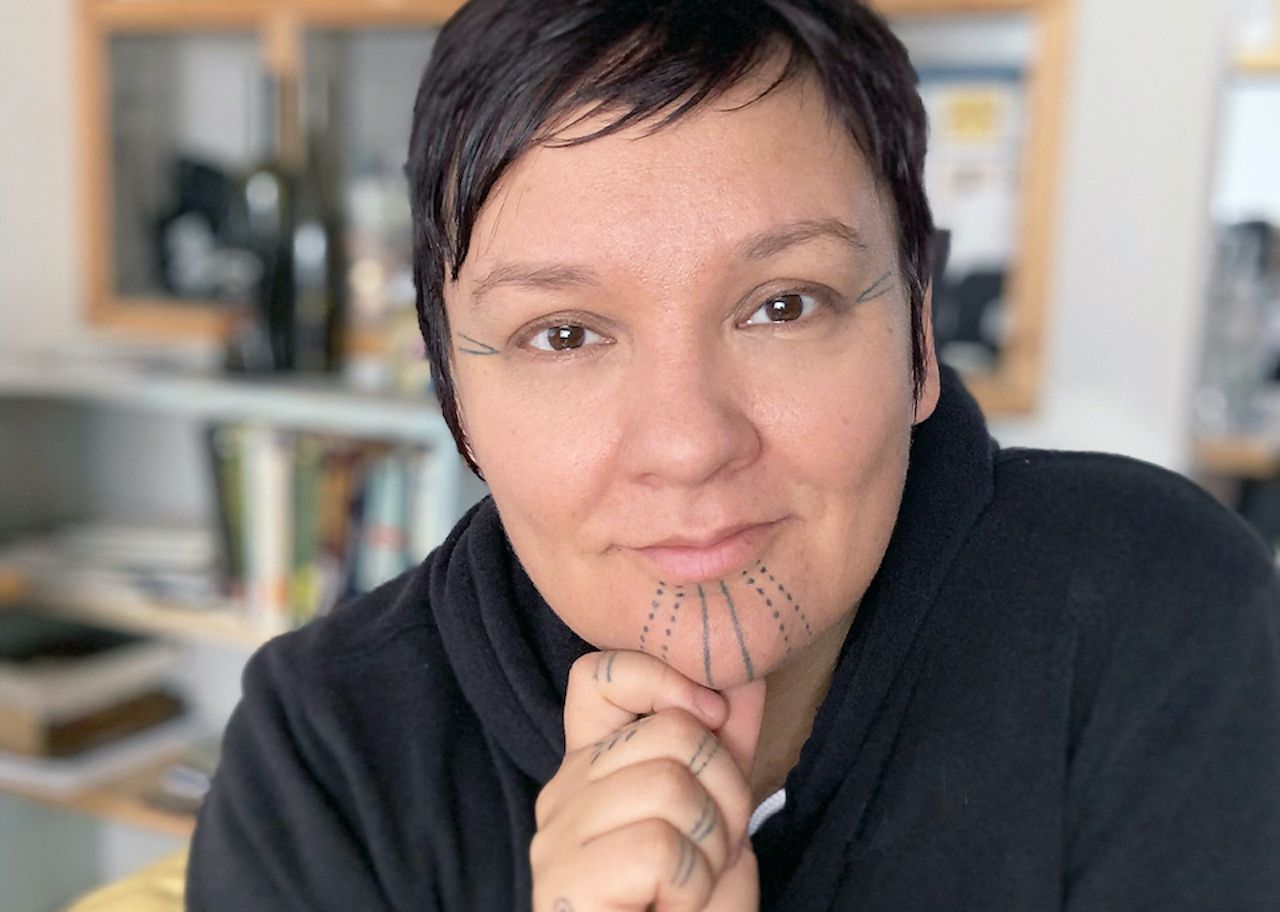 Expectant mothers often tattooed their thighs to give their newborns something beautiful to look at as they entered the world. Other ink was medicinal: Many women suffering from inflammation caused by breastfeeding tattooed their chests. Last year, Nordlum had a fellow Iñupiaq tattoo artist in Anchorage work on her hands in hopes of relieving the pain she’d developed through her own tattooing practice and work as a graphic designer.

“Tattoos create wounds your body has to send white blood cells to heal,” says Nordlum, explaining the practice’s medicinal value. “So if you have an infection, and you do it right … they can actually be healing.”

Over the years, academics have recorded various explanations for Inuit tattoos. In the mid-20th century, French ethnographer Bernard Saladin d’Anglure traveled to Nunavut in Arctic Canada to interview Atuat Ittukusuk, the last tattooed woman in her Igloolik village. Per d’Anglure, Ittukusuk explained that face tattoos were done to please the sun spirit while hand tattoos were said to please the sea spirit. Elsewhere in Nunavut, in Gjoa Haven, the Nattilik Inuit have been cited as believing that only tattooed women would be allowed into the afterlife in the sky. Those without tattoos would be condemned to a bleaker afterlife underground known as Nuqurmiut.

Nordlum cautions against accepting these explanations without a grain of salt: Early research was mediated by non-Inuktitut speakers whose own languages may have been unfit to express Native beliefs and whose own cultures may have biased their translations.

Translated into English, for example, the tattoos lose much of their nuance. “We’ve got a pretty good handle on how our culture treated them, but how I verbalize that in English might not do it justice,” says Nordlum, who hesitates to simplify the practice into a convenient “coffee-line answer” for anybody’s benefit.

Yet even for those who don’t speak the region’s Indigenous languages and whose grasp on the precise meanings behind Inuit ink might be tenuous, the significance of the practice is as evident today as ever.

The pain of being tattooed has always been a rite of passage. There are two traditional methods: stitching, which entails sewing the skin, and hand-poking. Though cotton thread and Western needles have replaced materials like sinew, bone, and porcupine quills, some degree of pain is inevitable, particularly when it comes to tender areas like the face. For many modern Native women, much of that hurt is also emotional.

In the 19th and 20th centuries, European missionaries built boarding schools on Native land across the circumpolar Arctic. Native children were forced to attend and kept from their culture. Both Nordlum’s mother and grandmother, neither of whom have tattoos, were raised at these schools. To this day, Nordlum’s mother is not fluent in Iñupiaq.

To be tattooed now is to face a history of cultural erasure. It can be challenging, powerful, and cathartic. In many cases, it’s also an intimate moment shared between Native women.

Nordlum’s studio is attached to her house, which is usually full of women: her mother, neighbors, friends, elders, other tattoo artists. Often, the girls who come to get tattooed also bring a friend, creating a safe, sympathetic space to discuss the experiences “all Native Alaskan women have been through.” Abuse and addiction are common themes, Nordlum notes.

Other times, Nordlum is alone with the women she tattoos, “and then there’s tears and joy and understanding. Just having that understanding, and listening, and being able to cry together is such a powerful, healing thing,” she says.

As a new generation of women is learning the art of Inuit tattooing, a closeness is being fostered among the women working to revive the practice. Nordlum apprenticed under Maya Sialuk Jacobsen, a tattoo artist from Greenland whom Nordlum got funding to bring to Alaska and who gave Nordlum her first tattoos. Sarah Ayaqi Whalen-Lunn, whom Nordlum works with almost daily in Anchorage, also trained under Jacobsen. Across the Arctic, in Canada, Hovak Johnston has been instrumental in casting new light on the practice through her Inuit Tattoo Revitalization Project, which inspired many of today’s tattooers and tattooees. 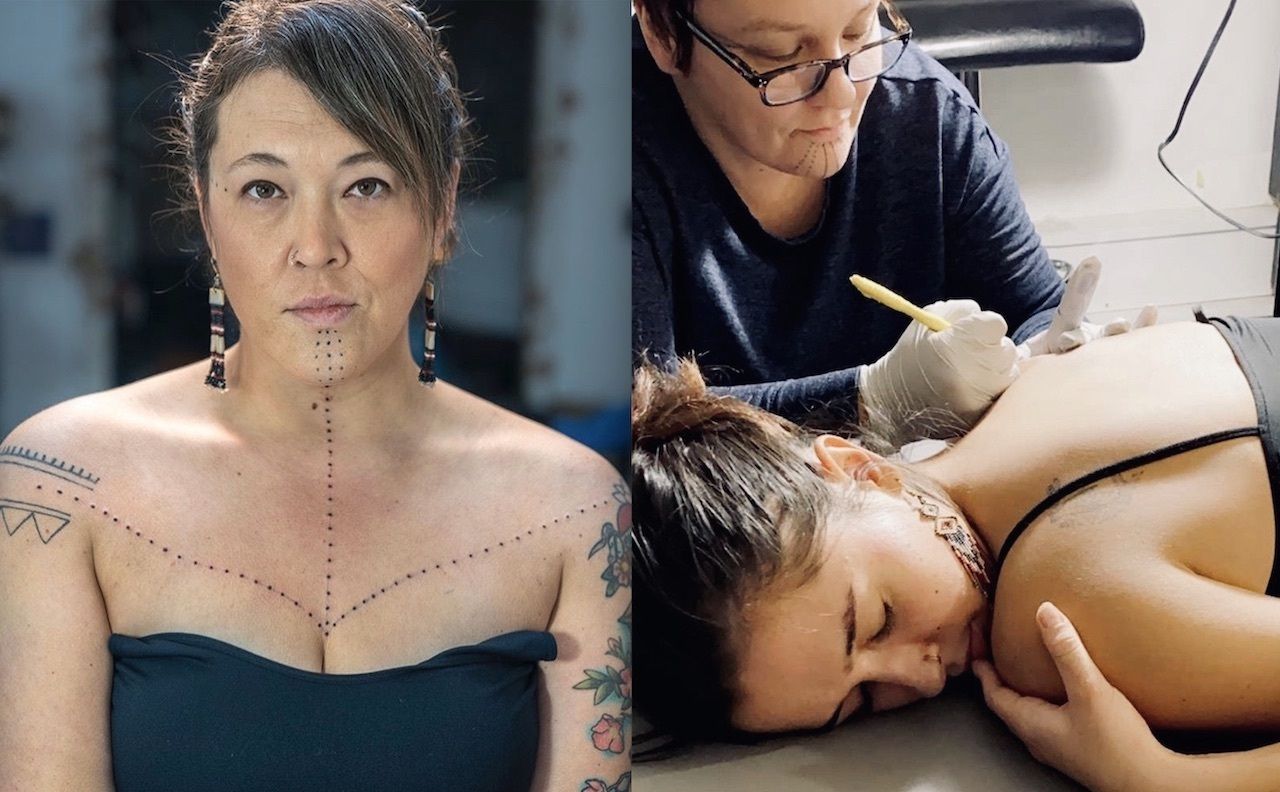 Though Native Arctic men were not traditionally tattooed as prevalently as women, Nordlum, who has two sons, also sees the value in opening up the practice to Native boys. “If you look at our statistics — incarceration, alcoholism, crime — it’s all our men here in Alaska. Per capita, it’s three times any other race.”

Deciding to train her oldest son, now 20, was a difficult decision. It started by chance: Nordlum had asked him to fill in during a presentation at the Anchorage Museum after double-booking her time with a presentation in Toronto. Recognizing his enthusiasm for the practice, and appreciating his unique perspective, Nordlum has been organizing training sessions ever since.

At the end of the day, “Our men need help,” she says. “If tattooing can help heal, and that gets them in the chair so they’ll talk about their issues, I’m more concerned about helping our people than I am about sticking close to the tradition.”

There are limits to widening the practice, however. The resurgence of Inuit ink within Native communities has also generated interest among Western enthusiasts. Some have even requested the tattoos. This has been controversial: A number of Native tattoo artists, and tattooed women, have spoken out against the appropriation of their culture while others, like Nordlum, have chosen to leave room for conversation.

“I guess it would matter which ones,” she says on whether or not she would tattoo a non-Native person. “On the face? I would be very offended … I know a few non-Native people here in Alaska who’ve done it, and it doesn’t recognize either culture because they don’t even know the meaning … And they’re not of that marginalized society. In fact, they’re the reason … So really it’s just more stealing of something that’s 10,000 years old.”

Before women like Nordlum, Jacobsen, Lunn, and Johnston began working to revive the practice, Inuit tattoos were on the verge of dying out with the last tattooed elders. Now, these modern traditional tattoo artists are not only reviving but also evolving the practice. While each has her own perspective on how the ink should be treated in the 21st century, it’s because of their collective effort that Native girls, and boys, can once again grow up admiring the heritage that was taken from them.

And that alone is worth celebrating with a new generation of Inuit tattoos.

FashionGreenland’s National Costume Is a Work of Art
Tagged
Art + Architecture Culture
What did you think of this story?
Meh
Good
Awesome