Elevation and distance are the most obvious metrics for determining the difficulty of a hike. But they’re not the only ones. Factors like terrain, trail maintenance, technical demands, and weather conditions all impact how strenuous a hike may be, regardless of its incline.

This comes as a surprise even to Appalachian Trail trekkers. “A lot of people find the Pennsylvania section to be really challenging, not because of the overall elevation gain but because it’s so rocky,” says Wesley Trimble, the communications and creative director of the American Hiking Society. “So even with a thru-hiker who’s gone through the Smokies and done some of the biggest climbs on the trail, when they get to Pennsylvania, a lot of times they find they can’t hike as long or as far as in some of the earlier states.”

Colorado-born Trimble knows all too well how subjective hiking can be. Doing trail work in Mississippi a decade ago, for example, he found the heat and humidity in the deep South to be more taxing than the high altitude in his native Rockies.

This opens up a world of possibilities for hikers, or at least a nation of them. Outside of states like Colorado and California, whose famous 14ers will always attract peak baggers, it’s refreshing to think that even the flattest parts of the country have the potential to serve up some strenuous hikes. In fact, they do. Here are the hardest hikes in the five states with the lowest elevations, and why serious hikers will want to tackle each one. 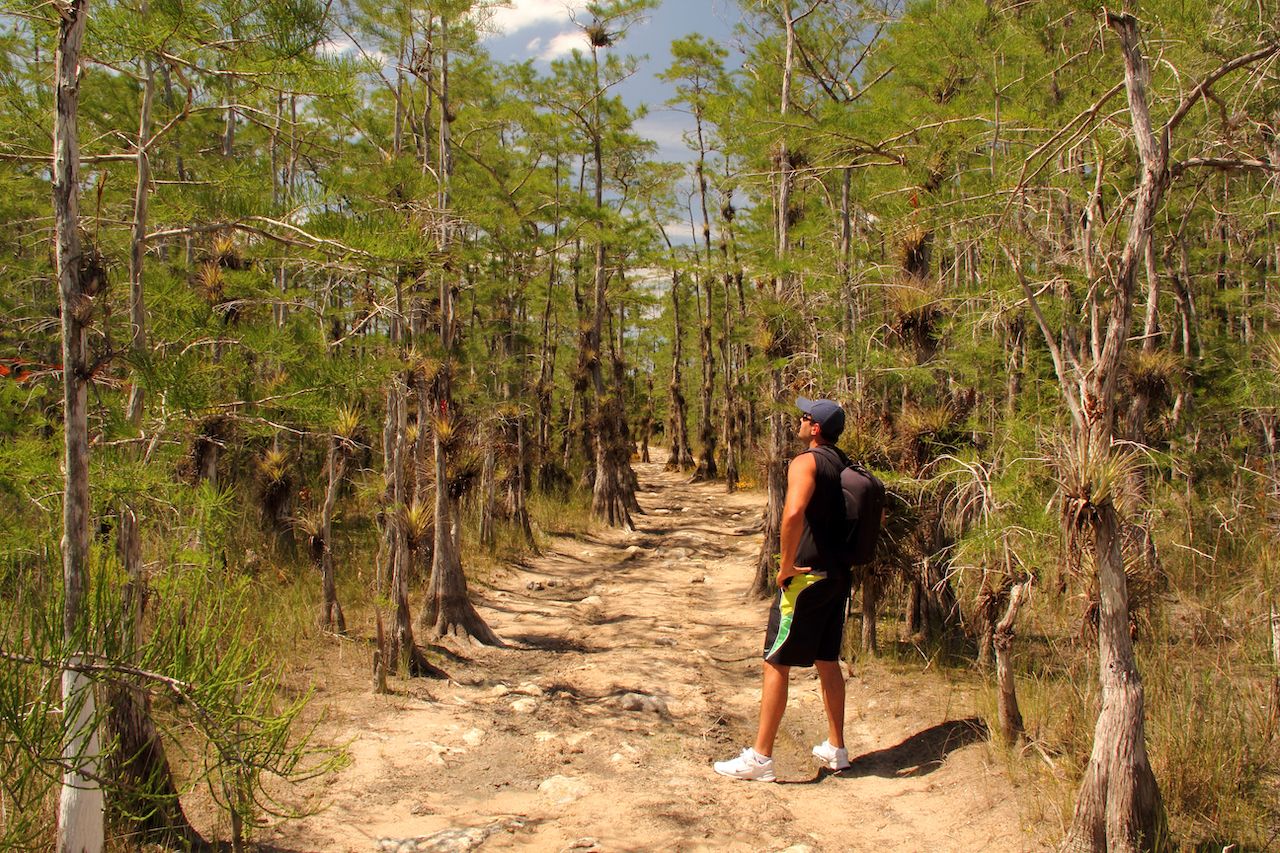 Florida’s highest point rises just 345 feet above sea level, securing its spot as America’s flattest state. Yet the Florida Trail was the first example that came to Trimble’s mind when asked about hikes with particularly challenging terrain or conditions.

The only subtropical national scenic trail, the Florida Trail spans nearly 1,500 miles from Gulf Islands National Seashore in the Panhandle to Big Cypress National Preserve in the Everglades. At times, parts of the trail are submerged.

“Hikers who hike those sections in those seasons expect to be essentially wading in water, which obviously increases the overall difficulty of a hike when there’s that resistance,” says Trimble, adding that hikers might encounter wildlife such as alligators and venomous snakes. Coastal states like Florida also demand extra stamina as sand “absorbs a lot of energy when you’re hiking.”

To tackle the entire Florida trail would take months. Adventurous hikers can get their feet wet, literally and figuratively, on the section that traverses Big Cypress National Preserve. The stretch from the southern terminus at the Oasis Visitor Center to the rest area at MM63 on Interstate 75 is the most strenuous leg of the trail. The best time to go is December through early March when the wetter parts of the trail, through the cypress savannas, may not be flooded — although hikers will likely still be ankle-deep in mud. Just be mindful: Even a few miles of this trail requires careful planning and preparation, and a backcountry permit is required. 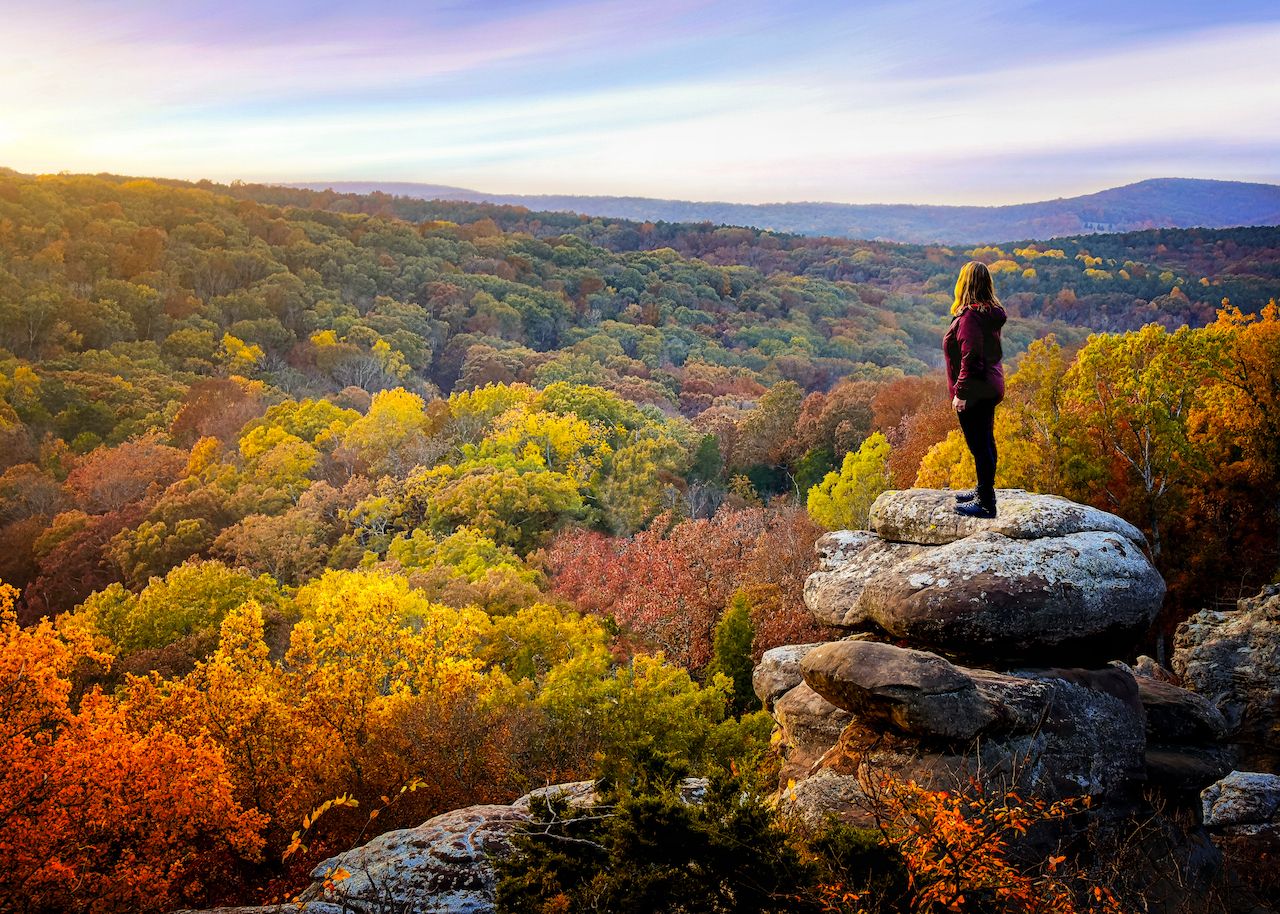 In southern Illinois, between the Mississippi and Ohio rivers, sprawls Shawnee National Forest. Of the national forest’s 300-plus miles of hiking and equestrian trails, visitors tend to favor the quarter-mile Garden of the Gods route, where 300-million-year-old sandstone formations with names like Devil’s Smokestack and The Squeeze are more intimidating than the hike to see them. A tougher route is the 6.5-mile Whiskey Cave Loop Trail.

At 990 feet of elevation gain, this ranks among the higher climbs in Illinois, where the tallest natural point, Charles Mound, measures just 1,235 feet above sea level. Difficult conditions and rocky terrain make this trail a challenge. It’s often muddy and, doubling as an equestrian trail, torn up by horses. Hikers also warn that signage for the Whiskey Cave Loop Trail, where fallen trees contribute to the overall ruggedness, can be unclear. The view over the Illinois Ozarks from Buzzards Roost, on the other hand, makes hoofing it more than worthwhile. 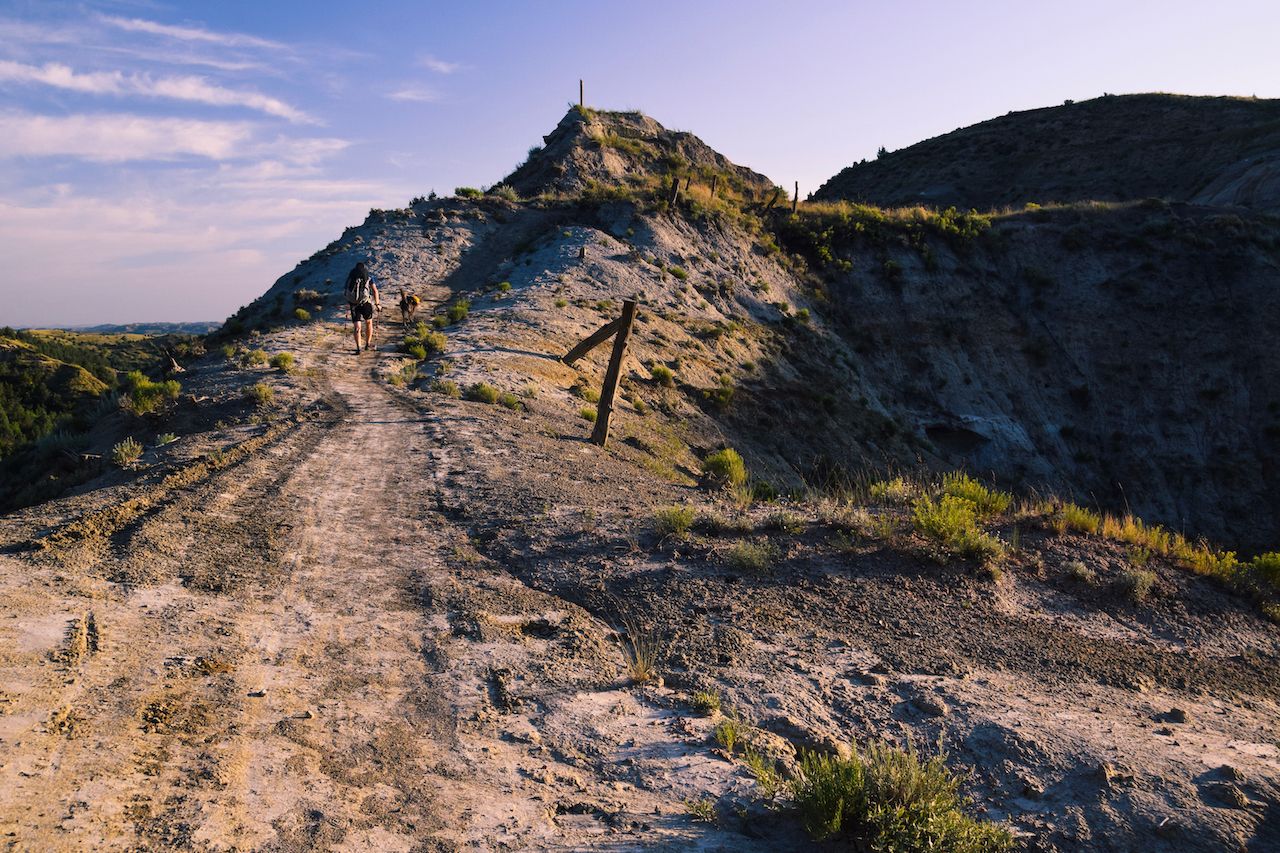 Here, in Theodore Roosevelt National Park, hikers will find much of the coveted Maah Daah Hey Trail. Spanning 144 miles of singletrack that’s notoriously grueling for mountain bikers, the Maah Daah Hey Trail system showcases the best of North Dakota’s Badlands, from its peaks, plateaus, and prairies to its bison, bighorn sheep, and wild horses. At its tallest point, the trail reaches just under 3,000 feet. It can be split up into eight sections. Among the steepest are the 6.9-mile Cottonwood leg, 1.5-mile Ice Cave leg, and 18.9-mile Buffalo Gap, which is rife with ups and downs. Together with its inconsistent terrain and sheer size, this constant scaling and descending is part of what makes Maah Daah Hey a fun challenge. 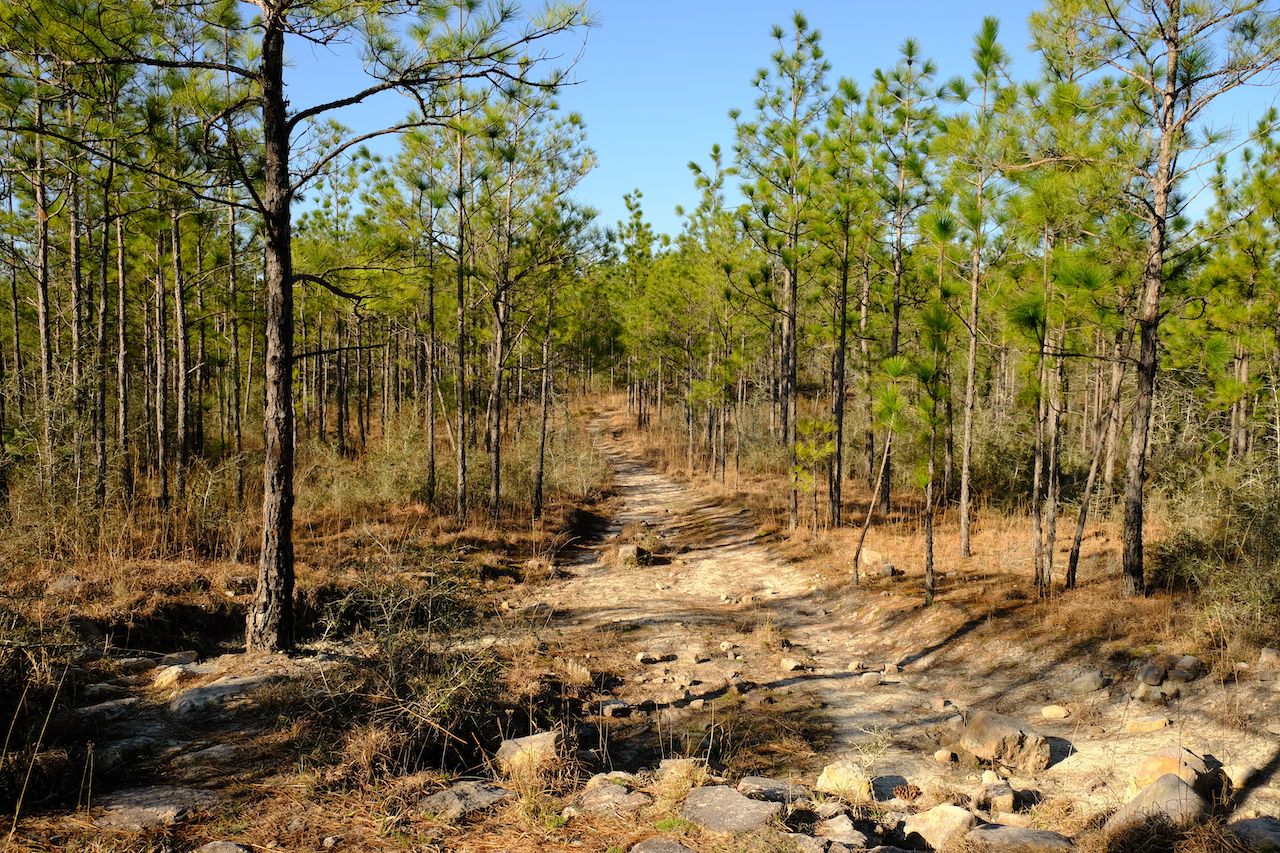 Many of the most beautiful trails in Louisiana belong to Kisatchie National Forest, the state’s lone national forest. You’d be hard-pressed to find a trail classed harder than intermediate here, or pretty much anywhere in the state, but the Wild Azalea Trail is moderately demanding. To level up the intensity, hikers can tack on the Kincaid Loop Trail, which brings the total loop to 16.2 miles and over 800 feet of elevation gain. Even still, it’s the beauty of the area, not the difficulty of the hikes, that draws nature lovers to Kisatchie National Forest. The Wild Azalea Trail was specifically acknowledged for its “outstanding scenic value” by the chief of the National Forest Service, who went so far as to designate it a National Recreation Trail. 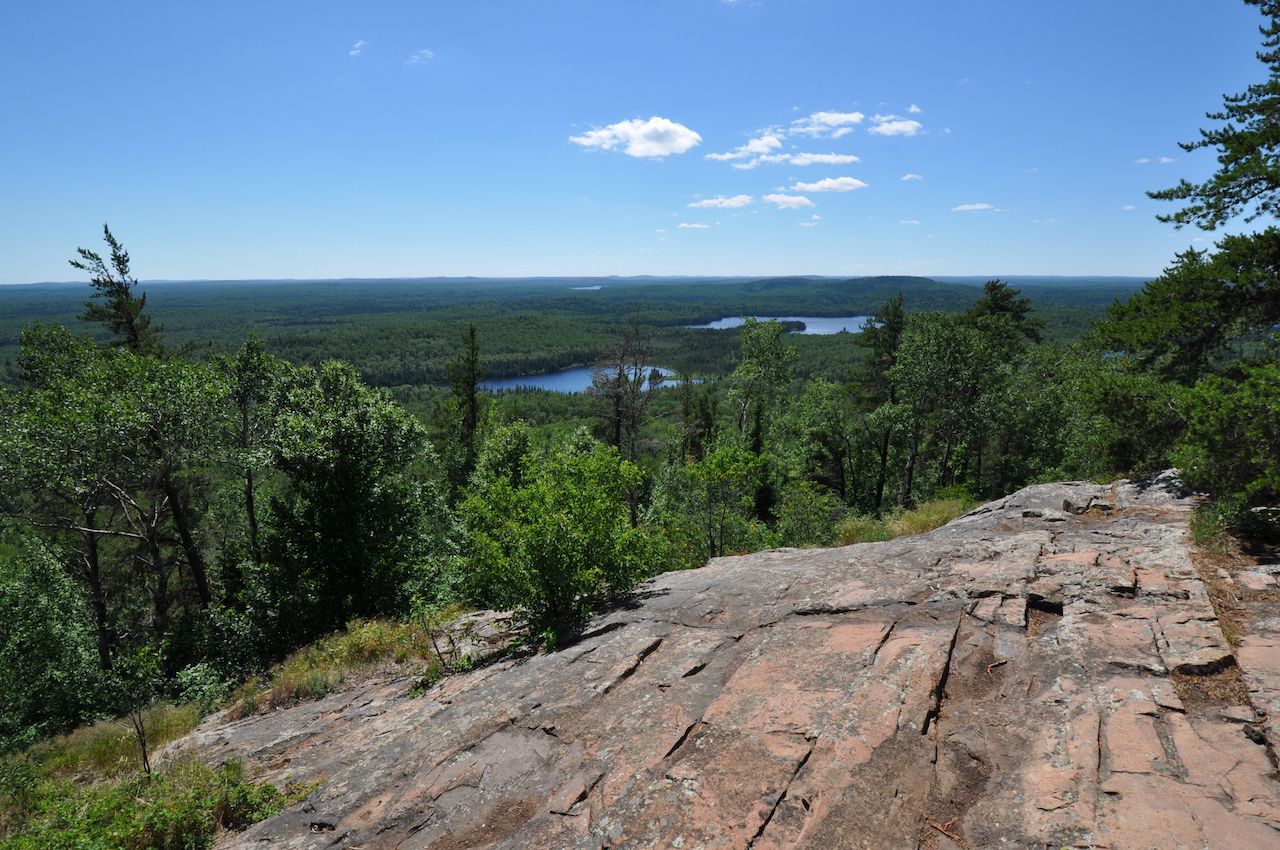 Our nominee for Minnesota’s hardest hike brings us back to the North Country National Scenic Trail. Northeastern Minnesota’s 46-mile Kekekabic Trail, or “the Kek” to locals, is said to span some of the most remote and formidable stretches of the North Country Trail. It traverses primitive wilderness, primarily within Boundary Waters Canoe Area Wilderness.

Both backpackers and day hikers are welcome to tackle the Kek, provided they procure a permit. Vegetation is among the obstacles they’ll face. According to the National Forest Service, ever since a 2007 fire tore through the eastern half of the trail, “plant regeneration [has been] vigorous,” and the path is often overgrown. This is common in remote areas where there’s neither regular maintenance nor enough foot traffic to contain the plant life.

“Nature will start to reclaim those trails,” says Trimble, “so there could be a lot more down trees and other obstacles.”

Accordingly, knowledge of map and compass use is imperative for Kek hikers, especially considering the lack of on-trail cell service. Note that the Kek may be closed during fire season, so prospective hikers should consult the Forest Service website before planning their treks.

HikingAll the Gear You Need To Have Epic Outdoor Adventures With Your Dog
Tagged
National Parks
What did you think of this story?
Meh
Good
Awesome