The Lofoten Islands are the most remote destination you could possibly travel to in Norway. A small archipelago off Norway’s northwest coast, the unique islands dazzle with high, rugged mountains that jut out from the sea, some reaching over 3,500 feet in height.

Rugged islets off the northwest coast of Norway

The Lofotens comprise five large islands and many smaller, less inhabited ones. Although they’re above the Arctic Circle, the islands experience relatively warm temperatures for such a high latitude. The mild climate is due to the Gulf Stream currents that pass through. Should you choose to visit Lofoten outside of summer, it’s beautiful in any season. You can ski in winter and perhaps spot the northern lights. The islands also have a long history of cod fishing, as cod migrate to its warmer waters in the winter to spawn, and you can wander its still active small fishing villages. There, you can snack on dried cod and lodge in a rorbu, or traditional fishing cabin. You can also surf in the Lofoten Islands, as well as kayak. Or try your hand at ax throwing at the Viking Museum, where you can also see thousand-year-old excavations of an original Viking compound.

Hiking in the Lofoten Islands 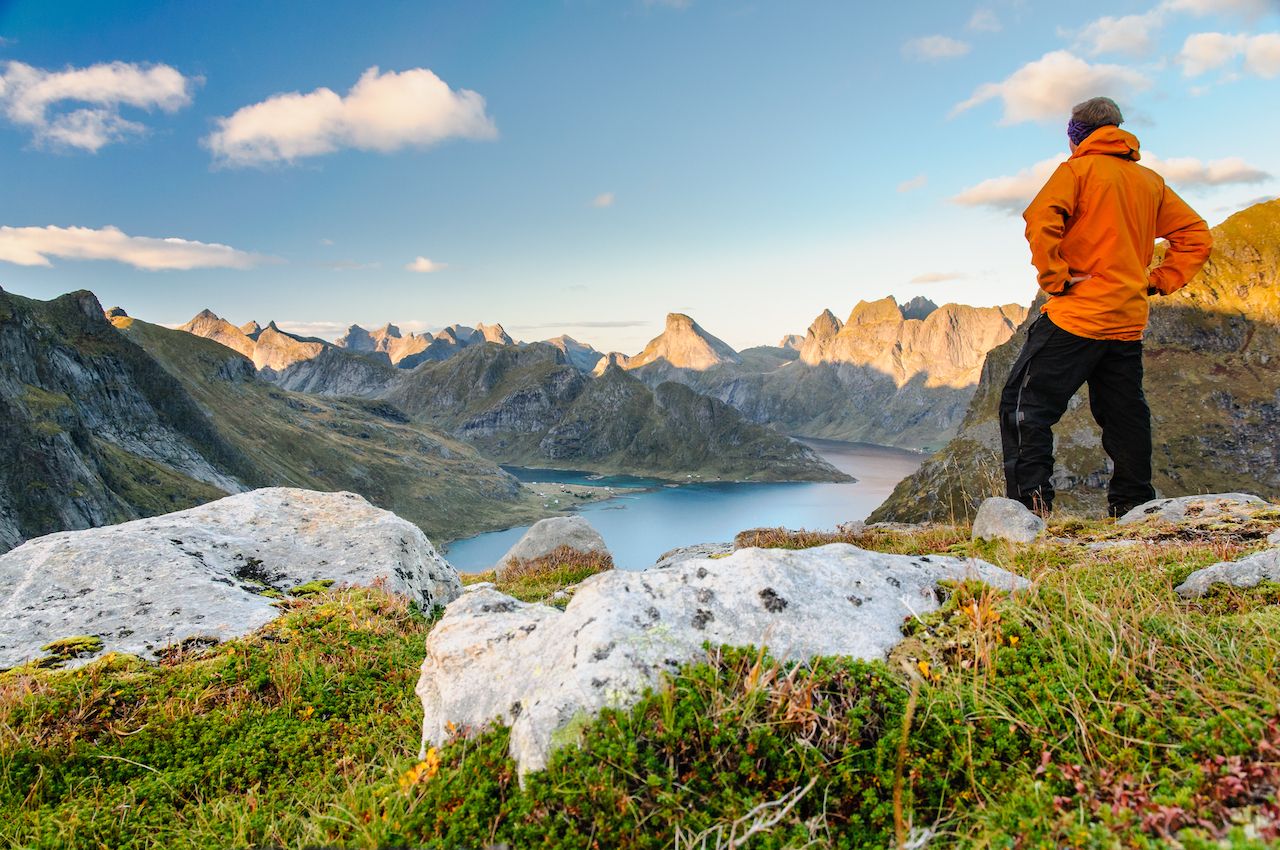 While Lofoten is worth a visit in any season, a spectacular aspect of summer’s all-day sunlight is the chance to take in the breathtaking scenery while on its epic hiking trails. Paths vary in terms of difficulty, terrain, and length, and on most of them you may only come into contact with one or two other people along the way — even with the uptick in hikers over the warmer months. After all, with fewer than 25,000 people, Lofoten’s population is small.

Whatever hikes you choose, remember that they may not be as marked and orderly as what you’re used to. If you aren’t hiking near sheep farms, though, the water may be clean enough to drink, so you’d only need to pack one bottle to be refilled along the trail. Inquire about this before you go. At any rate, given the solitude and the ruggedness of the trails, it’s a good idea to inform someone of your hiking plans before you set out.

But that is all part of the wild beauty of Lofoten — you may feel like you’re traversing a land that no person has traversed before! If you embrace the silence and unexpected landscapes, hiking the Lofoten Islands will be an unforgettable adventure you can’t experience anywhere else. Here are three of our favorite hikes. 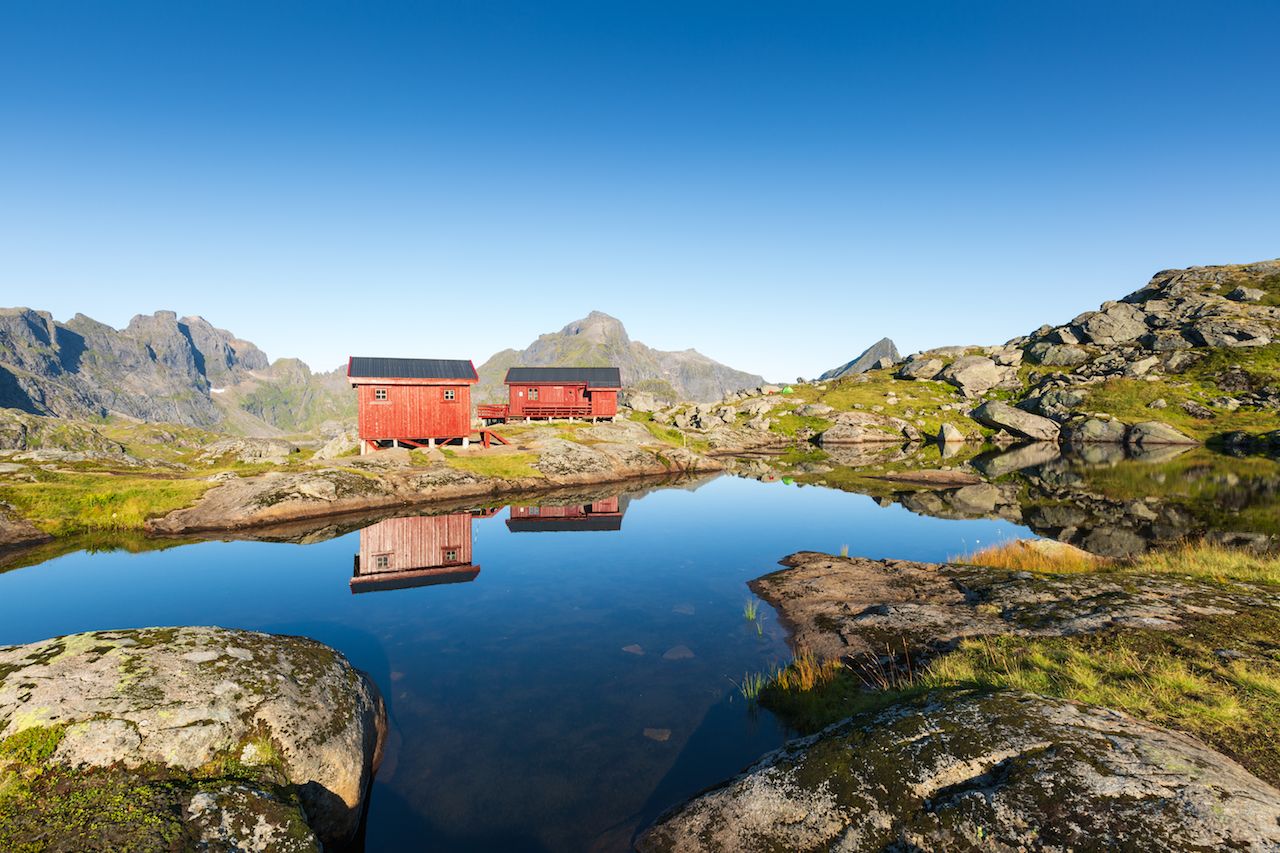 When looking for a moderate hike to get your feet wet (hopefully not too literally) in Lofoten, the Munken trail from the town of Sørvågen is the perfect place to start. Located on the island of Moskenesøya, Sørvågen is a small fishing village where you can park your car and look for three hike options that will lead you to a waterfall, hut, or in a circle.

The Munken hike that is the most worn and easy to follow is to the Munkebu hut. The trail begins with a slow and steady incline, passing a waterfall and several fresh lakes. You’ll traverse through some lush boglands before the trail turns into a steeper slope made of mostly rock and patches of green grass. Although this trail will feel like it’s meandering, the slow and steady incline will lead you to a magnificent inlet bay called Studalvatnet.

As you stand along this bay, look out across the peaceful and untouched craggy mountains and cliffs of Lofoten, a perspective that can’t be seen from the shoreline. You’ll feel more like you’re in a private cove, your voice will echo and ricochet off the slopes of colossal mountains that surround you. There will be some slippery and steep rock climbing at points along this trail, so hiking boots are recommended. But a chain handrail has been put in place for you to grab onto while traversing the steepest rock slabs.

You’ll find the Munkebu huts nestled along another inlet bay — red wooden cabins dotting the moss-covered rocks with gigantic mountains surrounding them. If you’d like to stay overnight in one of these huts, make sure to book in advance! On the edge of this calm bay reflecting the clouds above, the summit sprinkled with a few huts is a peaceful place to rest before beginning the journey back down along the same trail.

It’s a perfect respite after a day of climbing and also a resting point if you’d like to continue on to a more difficult hike leading to the top of the 3,376-foot-tall Hermannsdalstinden. The hike to the Munkebu cabins and back can be done in one day, so staying overnight isn’t necessary. While there’s a good chance people will be spending the night in the Munkebu huts, you probably won’t pass by more than three or four other groups of hikers on this trail. 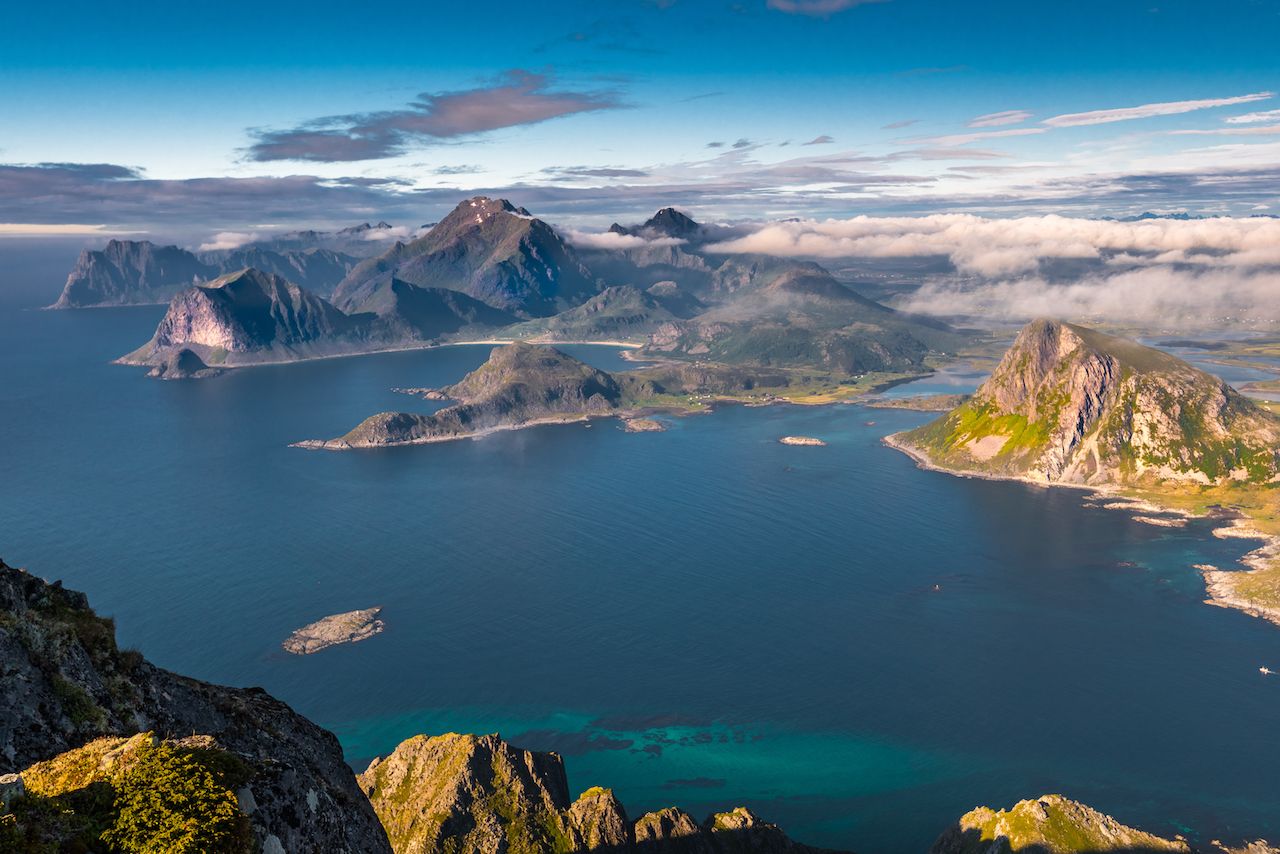 If you’d like a hike that’s a little more rigorous with jaw-dropping views that span out across the ocean, showing off the inlets and highest peaks of Lofoten, head to Stornappstinden. It begins at the base of a ski mountain in the small village of Napp. There, in the warmer months you may pass by many sheep grazing on bog-like slopes and meandering small waterfalls before you begin the steep incline that is made mostly of small rocks and dirt.

On the northern tip of the island of Flakstadøya, you’ll be surrounded by a grouping of jagged and deep mountains, monolith-like peaks that were carved by the Ice Age. Their grandeur won’t be clear until you begin to ascend. But as you climb closer and closer to the top, from all angles, the ragged, treeless mountains will come into view — almost like the backs of sea monsters rising from the depths below.

As you reach the final stretch leading up to the peak of Stornappstinden, it may feel like a steep scramble. Don’t feel guilty if you need to take a few breaks to catch your breath. Just turn around to see a clear panorama made up of the Norwegian Sea and surrounding islands. Depending on the weather, you may actually be hiking straight into the clouds to the top of Stornappstinden. There’s plenty of room to relax and take in the views once you reach the peak, just be careful of the steep cliff edges on the northern part. Make sure to plan this hike when there’s little chance of rain in the forecast, as fog can last for hours at Stornappstinden’s altitude and the small rocks that make up the hike could become loose in mud.

This trail is mostly unmarked, but worn enough that you’ll be able to follow it. We recommend reaching the peak in the early evening as a golden light sets the surrounding mountains aglow. Bring an extra layer; at such a high altitude, you’ll want to don a light jacket as you savor the vista. And with 24 hours of daylight for weeks on end, you can hike back down the trail at any hour. Don’t forget to advise people of your hiking plans since with Stornappstinden’s difficulty, you may not meet other hikers along your journey. 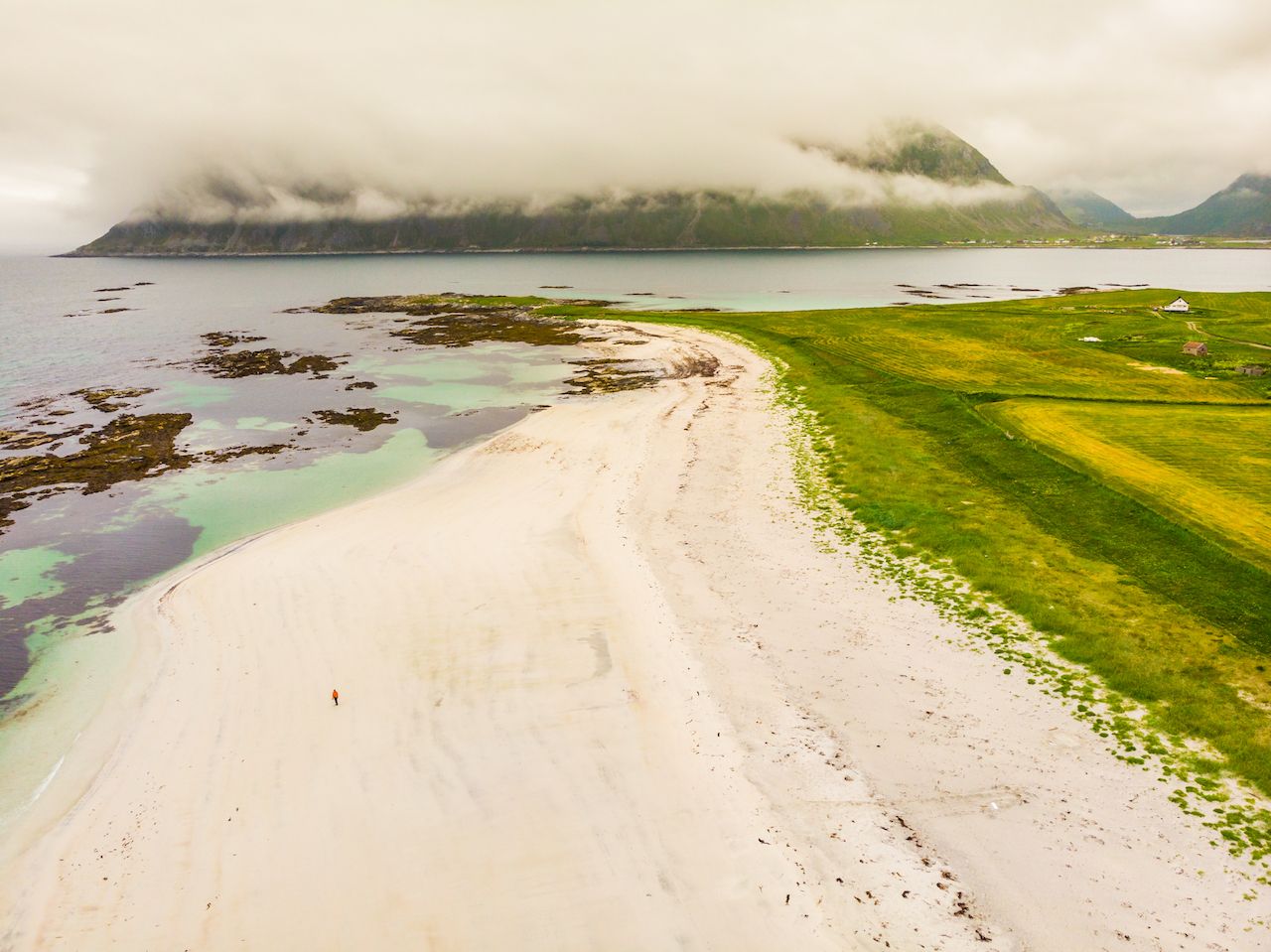 The long, white sandy beaches along Lofoten’s coastline are especially unique for an island above the Arctic Circle. You can easily forget that you’re in Northern Europe when enjoying a Lofoten beach in summer. What feels like a tropical island is actually covered in snow and ice for much of the year. Like Stornappstinden, this hike is situated on the island of Flakstadøya, and you can park right across the street from Flakstad church. You won’t miss the wooden red steepled building dating back to the late 1700s.

On this hike, you’ll mostly be winding around the mountain until you reach a steep incline as you get closer to the peak. A hike up Flakstadtind will lead you to a breathtaking view of the thin strand of white sand that makes up Skagsanden beach below. This trail up to Flakstadtind is on the easier side and could take you fewer than two hours to go up and down. That means you can spend the rest of the day wandering Skagsanden beach, which has an uninterrupted view of the ocean and the mountains framing it on three sides.

While Skagsanden beach is just one of the many Caribbean-like beaches of Lofoten, with aqua green tides rolling onto its shores in the summer months, there’s nothing quite like capping off a hike with a beach day celebration right below. The Lofoten Islands don’t get humid, so bring layers for a day filled with climbing excursions and relaxing on a quiet beach. We recommend laying out a picnic dinner and toasting to the great heights you’ve traveled to during your trip to Lofoten.

BackpackingThe Ultimate Guide To Hiking the St. Olav Ways
Tagged
Beaches and Islands Hiking Norway
What did you think of this story?
Meh
Good
Awesome