Inland from Greece’s famed islands, with their pristine beaches and clear blue waters, is a landscape of verdant pine forests, dramatic gorges, and steep mountainsides. Here stands the mythic Mount Olympus, the home of the Ancient Greek gods. Although no human mortal reached the summit of the fog-shrouded, 9,573-foot peak until as recently 1913, today any intrepid hiker can ascend to what was once the solitary domain of Zeus, Ares, Athena, and all the rest. If you have two days to spare while on a visit to Athens, here’s how to reach these lofty heights as well. 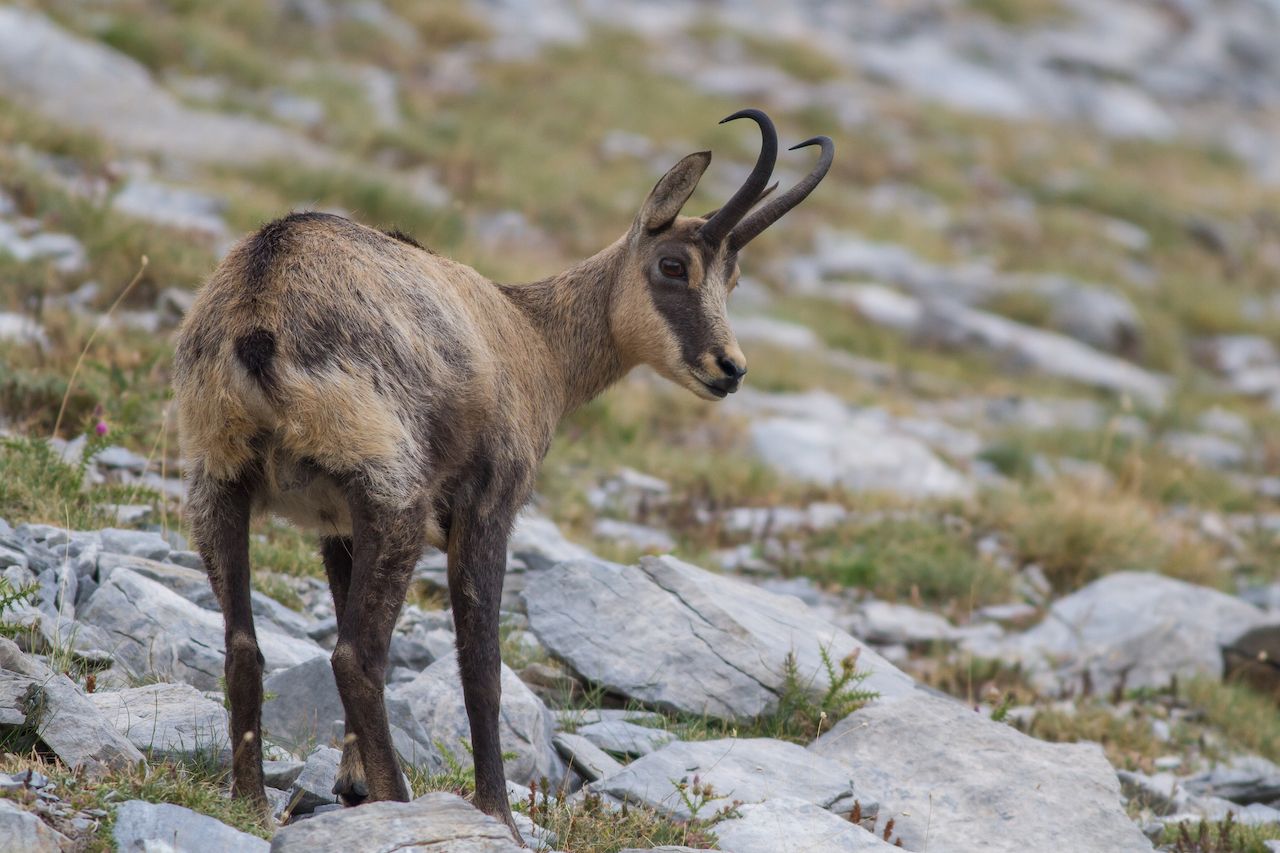 Mount Olympus is the tallest mountain in Greece. It’s comprised of 52 jagged peaks that are often shrouded in fog; the tallest of them is Mytikas, which soars to 9,573 feet. On rare clear days, from atop Mount Olympus you can see the city of Thessaloniki, the Aegean Sea, and miles in every direction.

The area makes up the Mount Olympus National Park and a UNESCO Biosphere Reserve, and it’s home to diverse animal and plant life. Twenty-five percent of all the plant species found in Greece are also found here, as well as dozens of plants found only here. You may also spot eagles, falcons, Balkan chamois goats, deer, foxes, red squirrels, and wild boar. Even brown bears and wolves call these wild mountains home.

You can hike Mount Olympus without a guide, but be cautious. While the distances aren’t too large, many parts of the hike are along a cliff edge, and the trail can seem confusing. Sign posts are also very vague. Make sure you have your route mapped out beforehand, and don’t be afraid to ask people questions. Those who have done the hike before are quick to help out.

Do not summit if the weather is bad. There are fatalities and rescues nearly every year. Note also that the steep incline, coupled with the dehydrating heat on lower slopes, can leave your calves very sore.

The weather at Mount Olympus is ever changing. 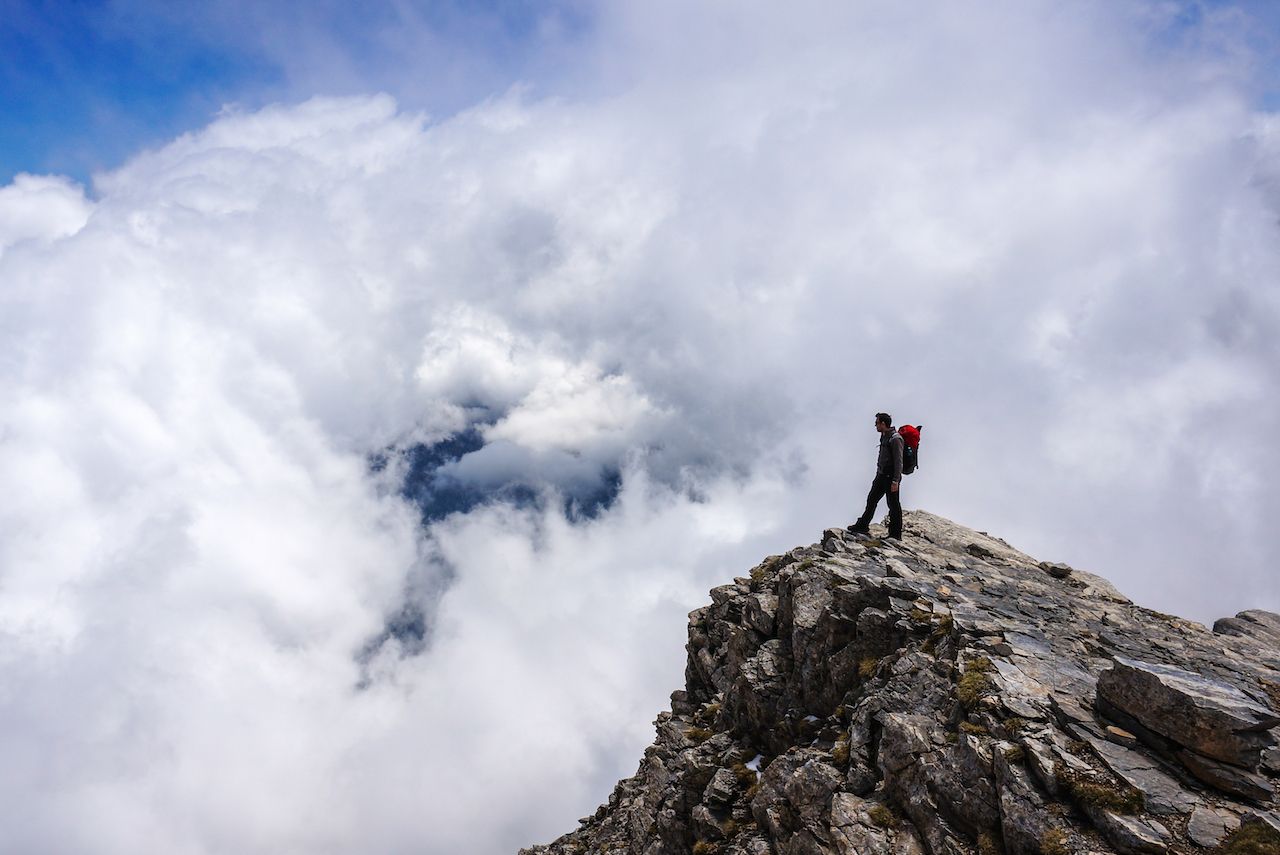 The hike itself is gorgeous, and the climate changes dramatically. At the bottom, you’ll be sweltering in the Greek heat — particularly if you’re hiking in the summer. You’ll cool down a bit in the forest. At the top, past the tree line and in a rock field, you’ll probably be shivering in the cold. Be sure to pack plenty of layers, including a hat and gloves.

More critically, the upper portion of the climb is full of loose rock. While the gorges and cliffs you’ll encounter are precarious enough, the loose rock is especially dangerous. People have been critically injured and even died on Mount Olympus when hit by rocks kicked down from hikers and mountain goats above. You should not endeavor to summit the peak without a hard hat.

Be prepared to call off your hike in the event of adverse weather. Summer months can bring thunderstorms to Mount Olympus, while in fall and winter the weather can actually be warmer at higher elevations. That said, Greece gets plenty of snow in the winter, so if you are thinking about summiting Mount Olympus in the winter or spring, you’ll need to be prepared for extreme weather and will need an ice ax.

Getting to the base of the mountain 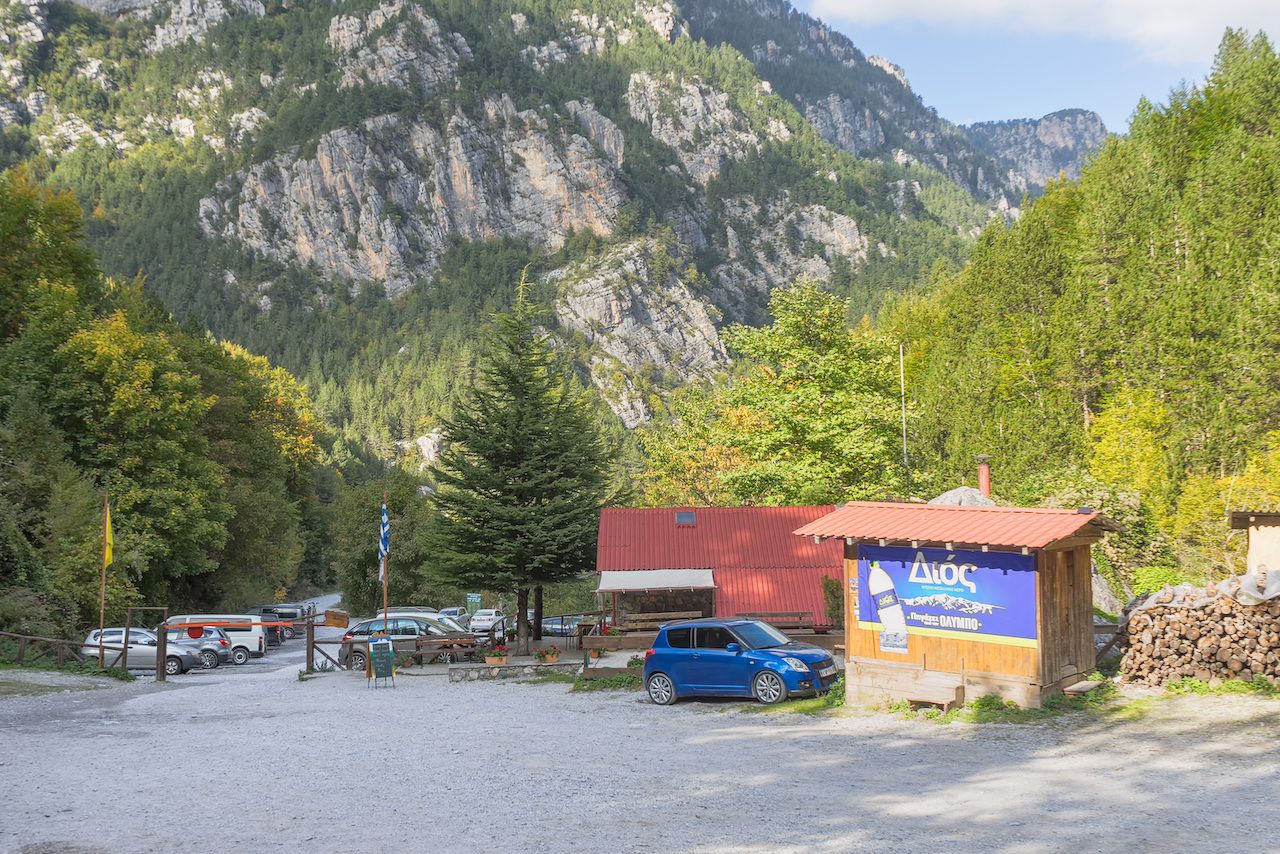 We suggest getting an experienced guide to help you summit the mountain. There are many refuges to stay in. If you’re planning on staying at Spilios Agapitos, your guide will ensure you have made reservations ahead of time. If you arrange a guide in Athens, they can possibly take you by car all the way from Athens to the village of Litochoro, which is a four-hour drive. You can also travel by train to Litochoro, which takes over six hours.

If you’ve decided to include a couple of days in Thessaloniki on your Greek visit, as we recommend you do, then you’ll be just an hour’s drive away from Litochoro — or two to three hours by public transport, depending on time of day.

Either way, from Litochoro, it’s under 40 minutes by car to the town of Prionia, located at an elevation of 2,526 feet. If you’ve ridden in a car from Athens, you’ll find a parking lot right in Prionia. If you take a taxi from Litochoro to Prionia, the standard rate is 25 euros, or less than $28 at today’s exchange rate.

You have the alternative of starting your hike right in Litochoro, but the first hour and a half is pretty much a non-hike — more like a hot slog — along the road. It’ll take you a day’s hiking (five to six hours) to get to Prionia, so you’re better off saving the time and starting at Prionia. As explained later, you can spend that time on the mountain instead. 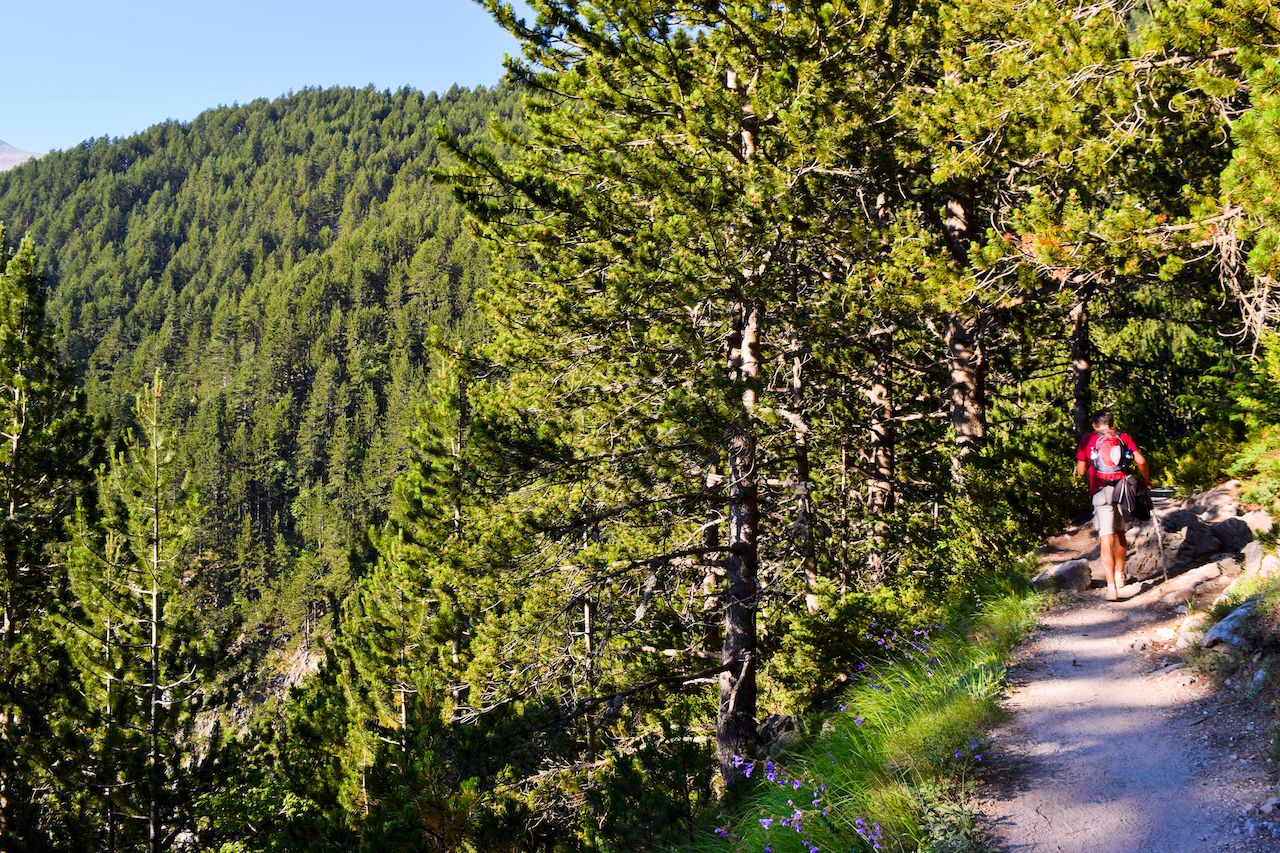 Leave Athens in the morning and you’ll be ready for lunch in Prionia, where there is a restaurant at the base of the trail. Then it’s time to start heading up.

The trails are marked at III-VIII level of difficulty, using international mountaineering standards. There are no super easy trails, but you could stay at a moderate level of difficulty at levels III-IV the whole time. You won’t be summiting, but you’ll enjoy this amazing national park, the first one established in Greece (1938), as well as see impressive views and get in a great hike.

If you want to follow the most frequented trail, you will ascend a little less than three miles to the Spilios Agapitos refuge, tucked into the dense pine forest at about 2,040 meters, or 6,700 feet. The hike to Spilios Agapitos is pretty much straight up, but the level of difficulty is moderate. 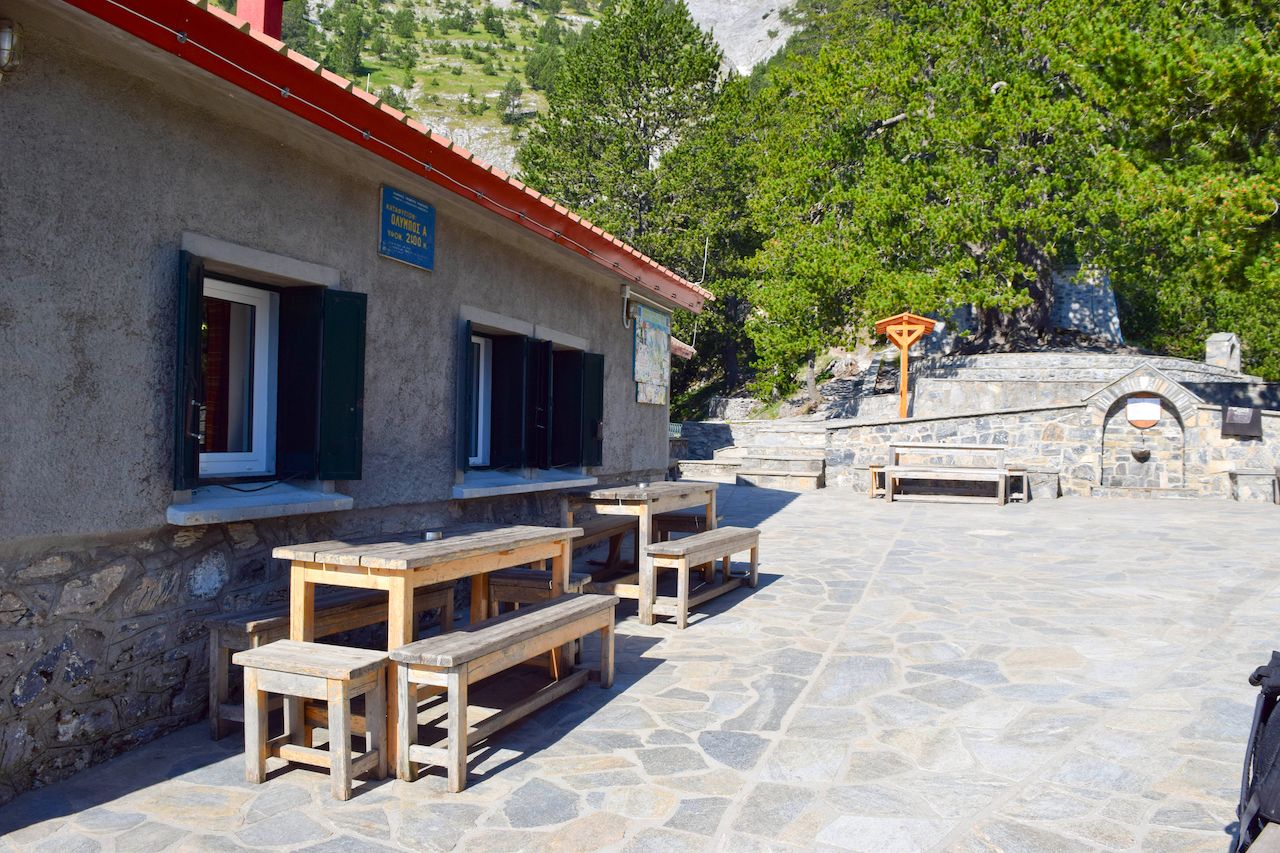 There are 12 refuges in the Mount Olympus park, but there are three main ones. Spilios Agapitos is the best known among them. At Spilios Agapitos, we had nine people in our room, most of us sleeping in bunk-beds.

Most of the hikers you’ll find along the lower portion of the national park are Greek. However, at the refuge you will find a diversity of languages spoken. We heard German, Spanish, French, and English. There’s no need to bring sleeping bags. For $14.50, you can sleep at the refuge with blankets they provide. (You’ll sleep in your hiking clothes, as there aren’t sheets.) Alternatively, for just over $3 you can set up a tent and camp outdoors.

For an additional $5.50, we got a simple but very tasty dinner of pasta there. For breakfast, the homemade yogurt with locally sourced honey was not just a perfect way to fuel up for the day ahead — it was also delicious.

After the refuge, things get more difficult. 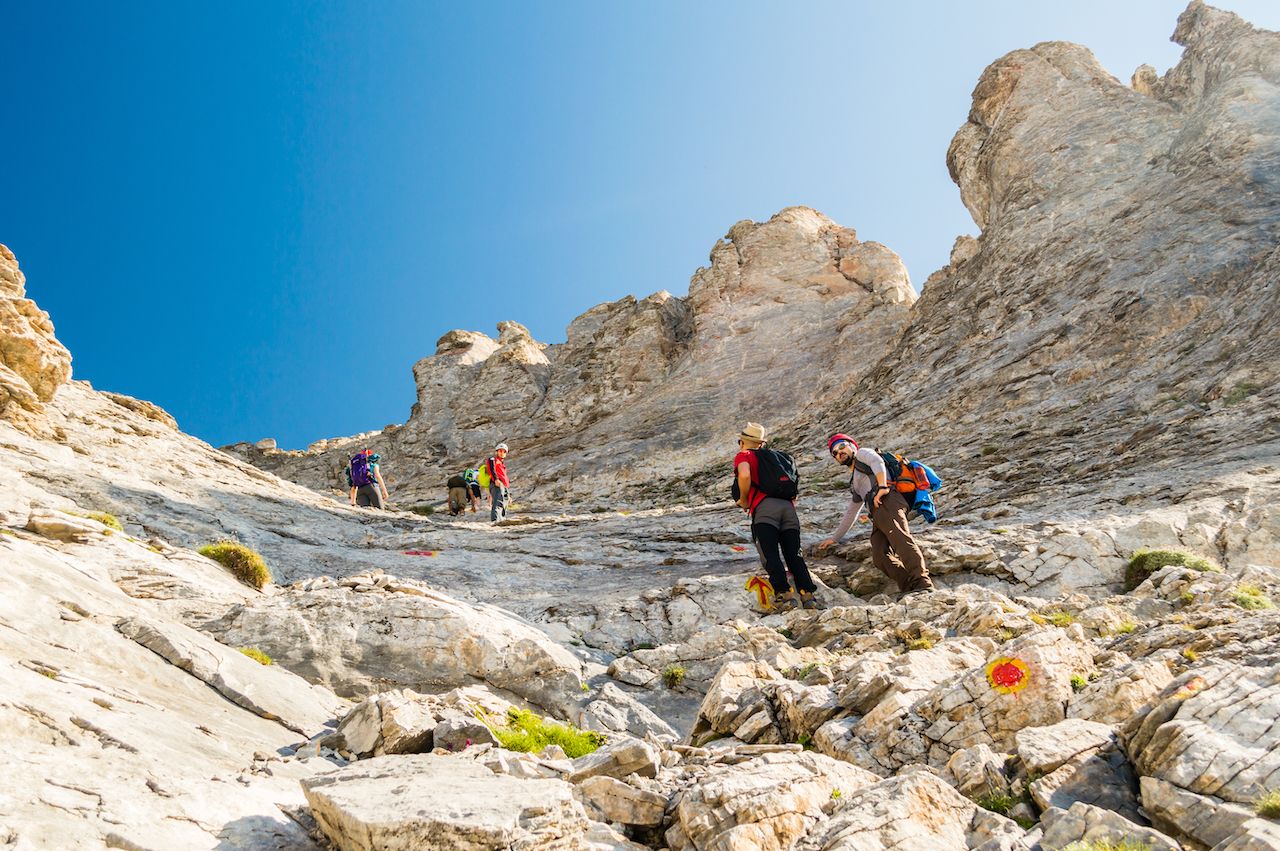 After the Spilios Agapitos refuge, you have two options. If you have more time, as did some Spanish women we met, you can hike towards Koryfes on the Muses Plateau, which is located at around 8,400 feet. They were planning on staying at the other refuges there, from where it’s even possible to explore some of the mountain’s other peaks. It’s a much less traveled path and one I’d love to undertake in the future.

Another option is climbing the Throne of Zeus. It’s located on Skolio, the second tallest peak on Mount Olympus at Skilio at 9,550 feet. You’ll need serious technical gear and will have to use ropes to scale the ledges here. If you’re an experienced climber, though, these climbs are all very doable.

My two friends and I were working in Athens for the summer and only had a weekend to devote to seeing the home of the Greek gods. So on this Sunday morning we took the more common route. We headed up towards Mytikas peak. It took us about three hours to reach Skala Peak. After Skala Peak, there’s a long scramble of about 600 feet that is really the most dangerous part of the hike. While falling is a large danger, tumbling stones from up high make up the largest danger — the sedimentary rock on Mount Olympus comes loose very easily.

Hiking up to the famed peak that one has read about in books so many times is a moving experience. Skirting along a cliff, scrambling over rocks, the steep angle of ascent, and the plummeting temperatures remind you that, while doable by any experienced hiker, this trek is no walk in the park. The limited signage, deep gorges, and sweeping vistas add to the untamed sensation of the hike, as well as the lingering sense that maybe some immortal aura is out there somewhere.

Beaches and IslandsThe Best Islands You Can Day Trip To From Athens
Tagged
Hiking National Parks Insider Guides Athens, Greece Greece
What did you think of this story?
Meh
Good
Awesome

The World’s Best Urban Hiking Trails Inside City Limits
8 Waterfalls Near Seattle To See The True Beauty of the Pacific Northwest
25 Must-Know Pieces of Hiking Advice for Beginners
Best Hikes With Stunning Views in the Ozark Mountains
Portland Has the Best Urban Wilderness in America. Here’s How To Explore It Yourself.