Summering in the Greek islands isn’t just for British royalty anymore. And, unfortunately, that’s kind of the problem. The places that have given the islands their worldwide reputation for white-walled cliffside villages, ancient ruins, and stunning blue water are full. Hit a beach in Santorini this time of year, and you’ll be hard-pressed to find someplace to put a towel. Drinks at bars in Mykonos are as much as they are in Manhattan. It’s generally just a tourism glut.

The good news is that Greece has over 6,000 islands, and not all of them are over-touristed. Sunvil, a UK-based independent tour operator, analyzed search data for Greek islands and found the destinations that have seen the greatest increase in search traffic — signaling that while these underrated islands are devoid of crowds, they likely won’t stay that way for long. Here are the top 10 islands in Greece to plan a trip to before everyone else does. 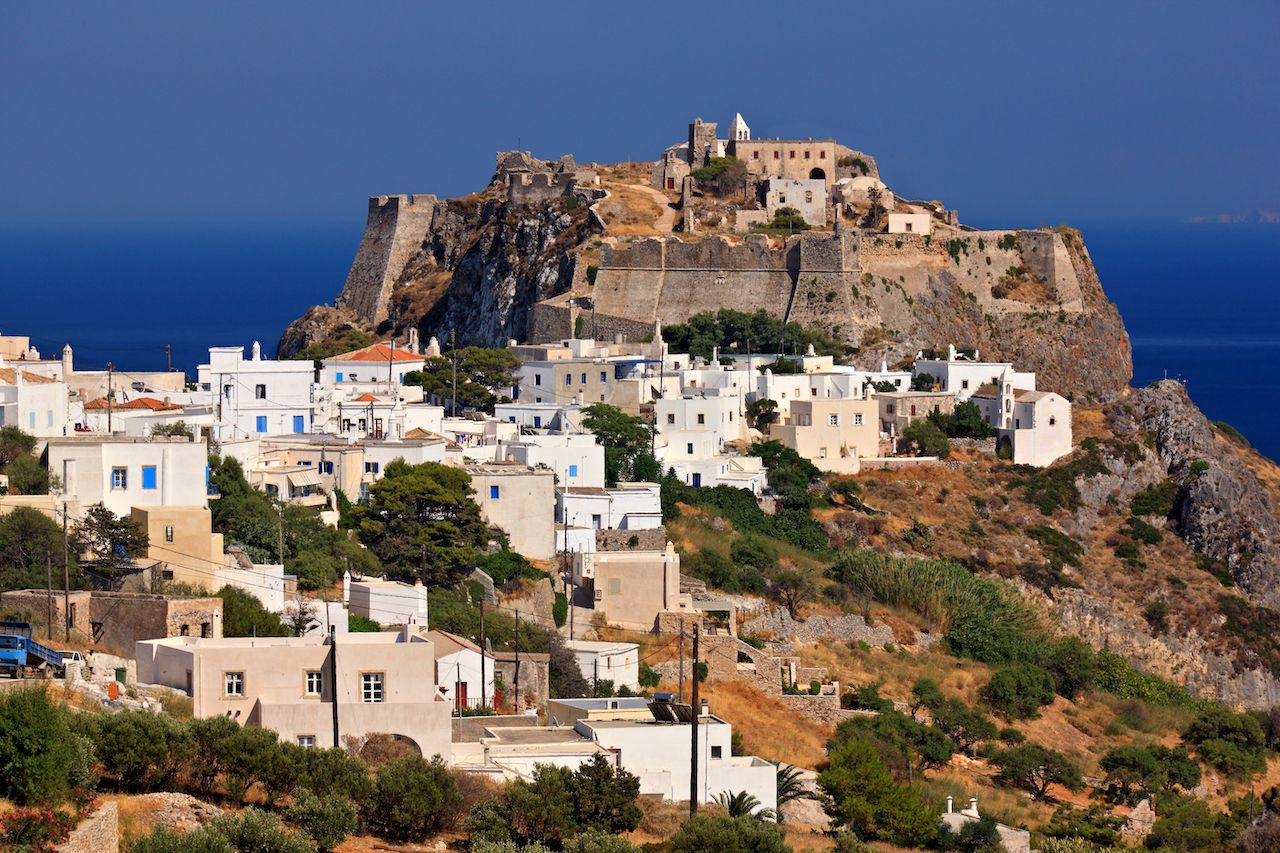 No slice of paradise should be easily obtained, and the sparsely populated island of Kythira is no exception. The most cost-effective way to get here is to travel to the far south of the Peloponnese peninsula and grab a ferry from Neapoli, a long trip but also a cool way to see some new parts of the country. Once on-island, you’ll find a place filled with rivers and deep gorges where you can lose yourself in river trails like the one off the village of Mylopotamos. Here, you’ll hike past ruins of old mills to waterfalls perfect for cooling off after a long hike.

Another hidden trail takes you to the secluded beach at Kalami, which will require either a canyoning guide or a 90-foot descent down a cliff to reach. You can also visit the capital city of Hora where a Venetian castle looks out over the island, and you’ll enjoy book shops, coffee shops, and serene rooftop restaurants. Come quick though — Kythira saw a whopping 340-percent increase in search interest this year, over eight times as much as the next-most-popular search. 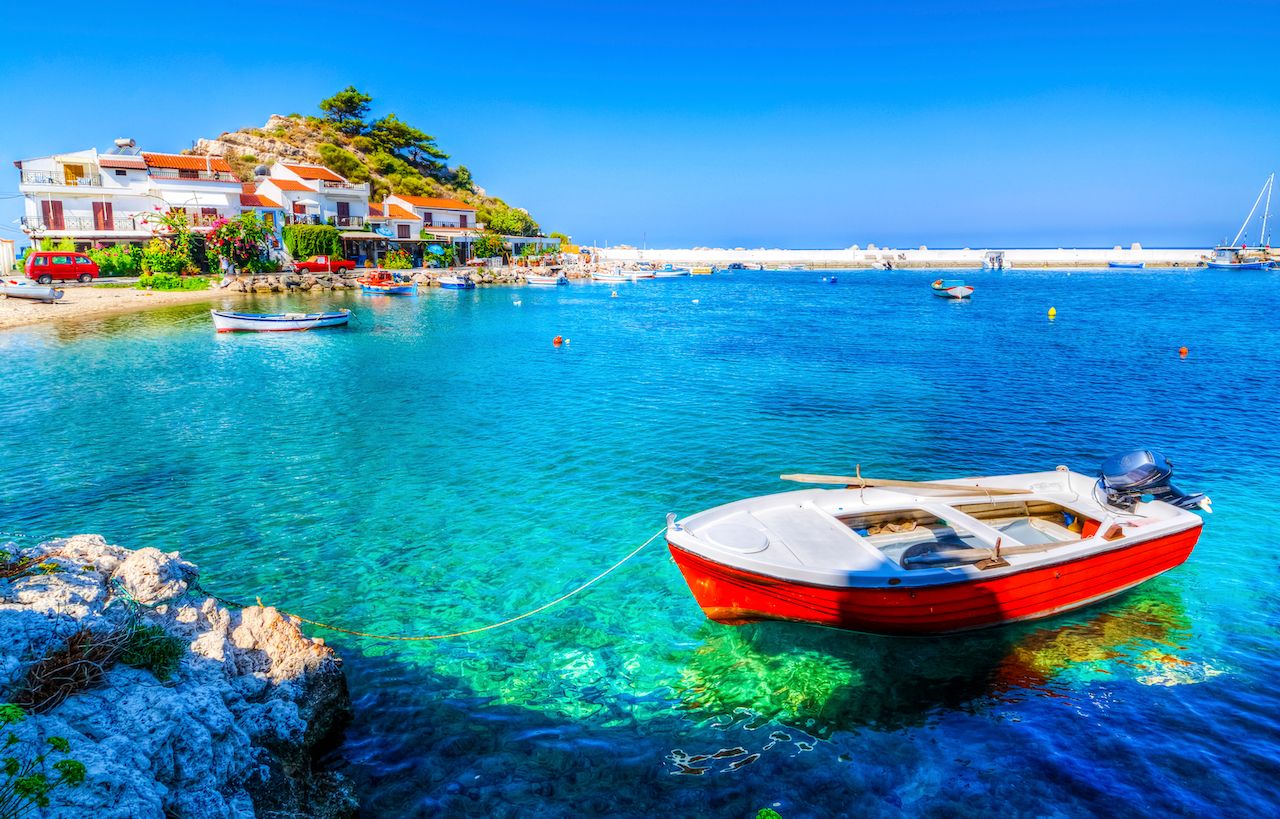 Remember in high school when you had to memorize that formula for the side lengths of a right triangle? You can thank Samos, birthplace of the great mathematician Pythagoras who gave us the Pythagorean theorem, for that. His old thinking cave is near the town of Isomata, though aside from a sweeping view down the south side of Kerkis mountain, you won’t find much there.

Ninth-grade-geometry tourism aside, Kerkis and its almost-twin peak Ampelos dominate the skyline. Hikes up those mountains offer the most rewarding views of the island, but if you’d rather spend your vacation without leg cramps, you can also enjoy the perfect weather at spots like Potokaki Beach and Kokkari, where sunset drinks are among the best in the world. 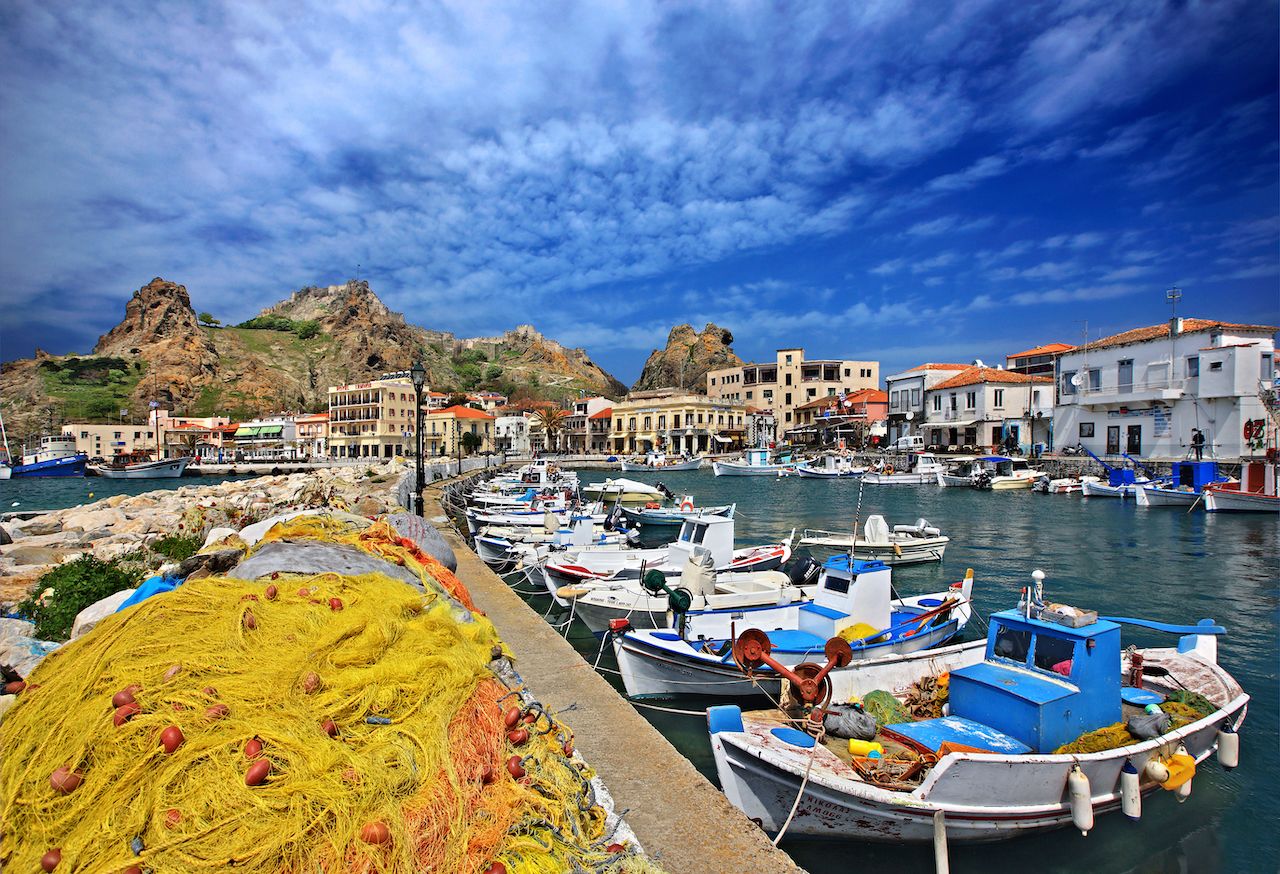 A little bit like Guadeloupe, this island in the north Aegean is shaped like a butterfly and has a wealth of topography. The windswept beaches along the coast have some of the best winds in the region, and spots like Keros Beach have luxurious tents and glamping resorts, so you don’t have to rough it. On the island’s interior, you’ll find a curious desert where the sandy hills and low shrubbery of Pachies Ammoudies make you feel like you’ve magically transported to somewhere in Nevada.

Lemnos is also rich in volcanic rock formations far north in Falakro. You’ll also find the ruins of an ancient amphitheater along the coast in Hephaestia, as well as a religious shrine and ancient baths. 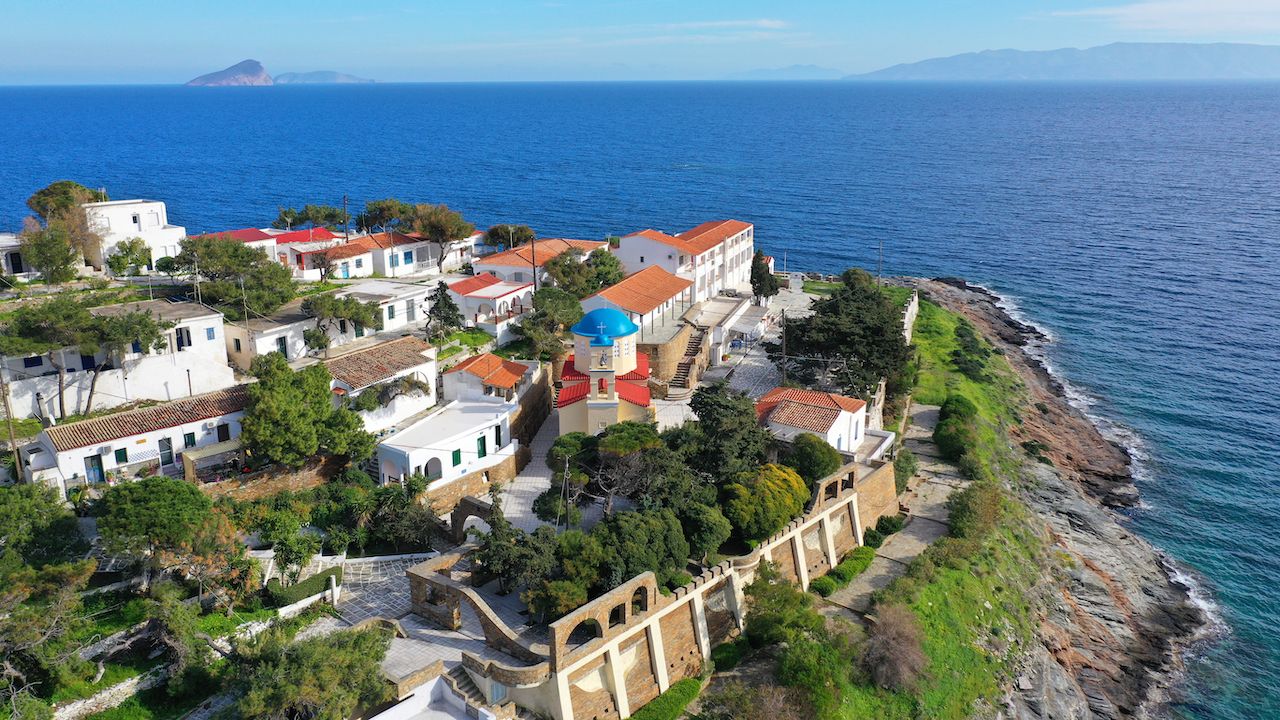 For a relatively undiscovered island that’s easily accessible from Athens, check out Kythnos. Here, you’ll be greeted by a smattering of whitewashed buildings along the shoreline with rolling green and brown hills beyond. Venture over the mountains into Loutra and find the island’s most famous attraction, its natural hot springs. These holdovers from the area’s volcanic past are the only place you might find even remotely crowded, but visit during the week it shouldn’t be too bad.

Beaches like Apokrousi and Episkopi double as boat tie-ups, and though they don’t rage like we do back in America, the scenery is enough to make them worth the visit. You can also check out the biggest cave in Greece at Katafiki then, when you’re finished, enjoy a full seafood lunch along the cobblestone streets of Chora. Kythnos is also home to one of the most ornate small church ceilings in the country, which you’ll find in the seaside town of Kanala. 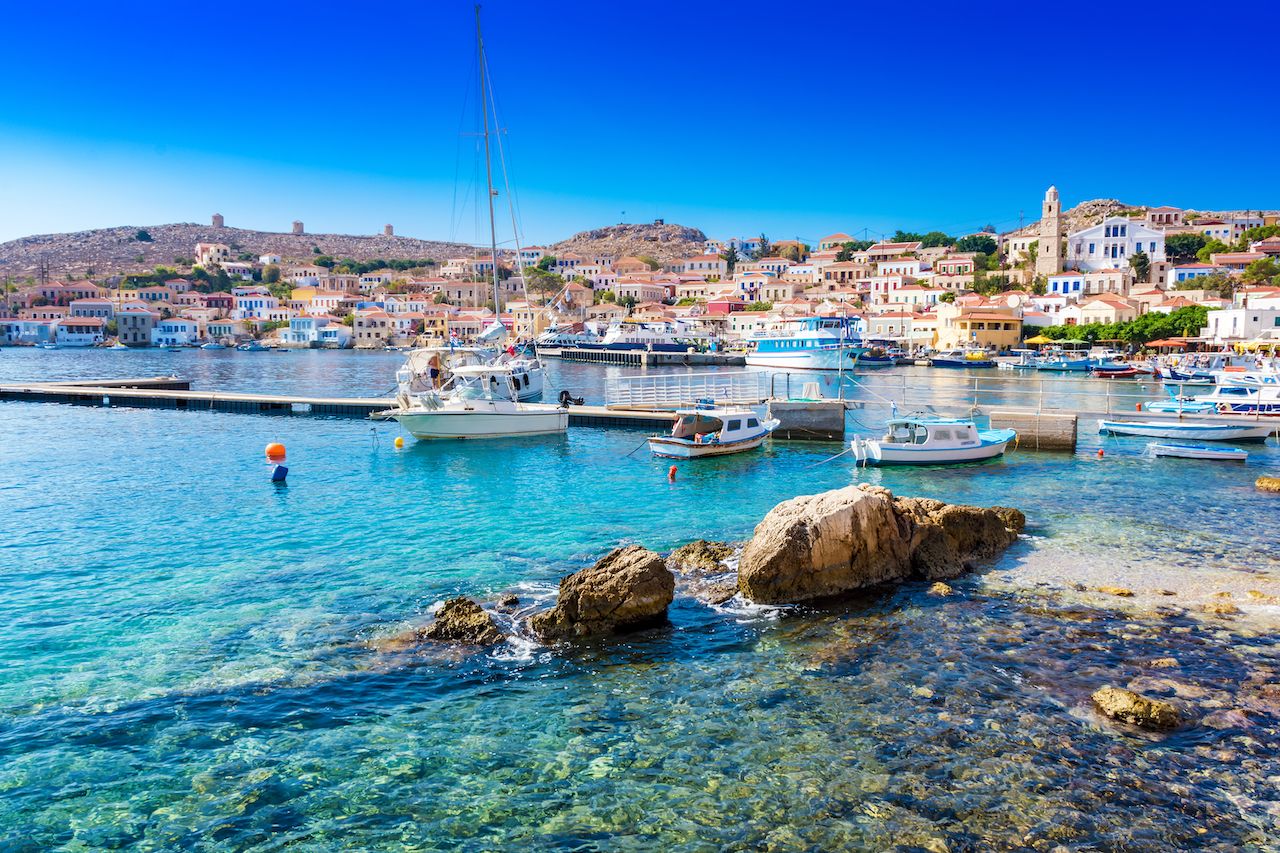 If you want to feel like you’ve wandered into a remote fishing village in the middle of perfect blue waters, Halki is your spot. A 75-minute boat trip from Rhodes, this little island feels frozen in time, literally since the clock in the harbor has been stuck on the same time for decades. Under that clock, you’ll find colorful, rickety fishing boats where seafarers prepare their vessels and unload their catches in the afternoon.

Though buildings throughout the island look like they date back millennia, much of the island is also new and bright. Visiting the waterfront tavernas in the island’s lone settlement of Emborio, you’ll find many have cable television and, on occasion, WiFi. There are not many visitors, though, so be prepared to make your own fun. The good news is that the people here are the kind of small-town friendly that make you feel like you’ve lived there for decades, so much so you may find it hard to get back on that boat to Rhodes. 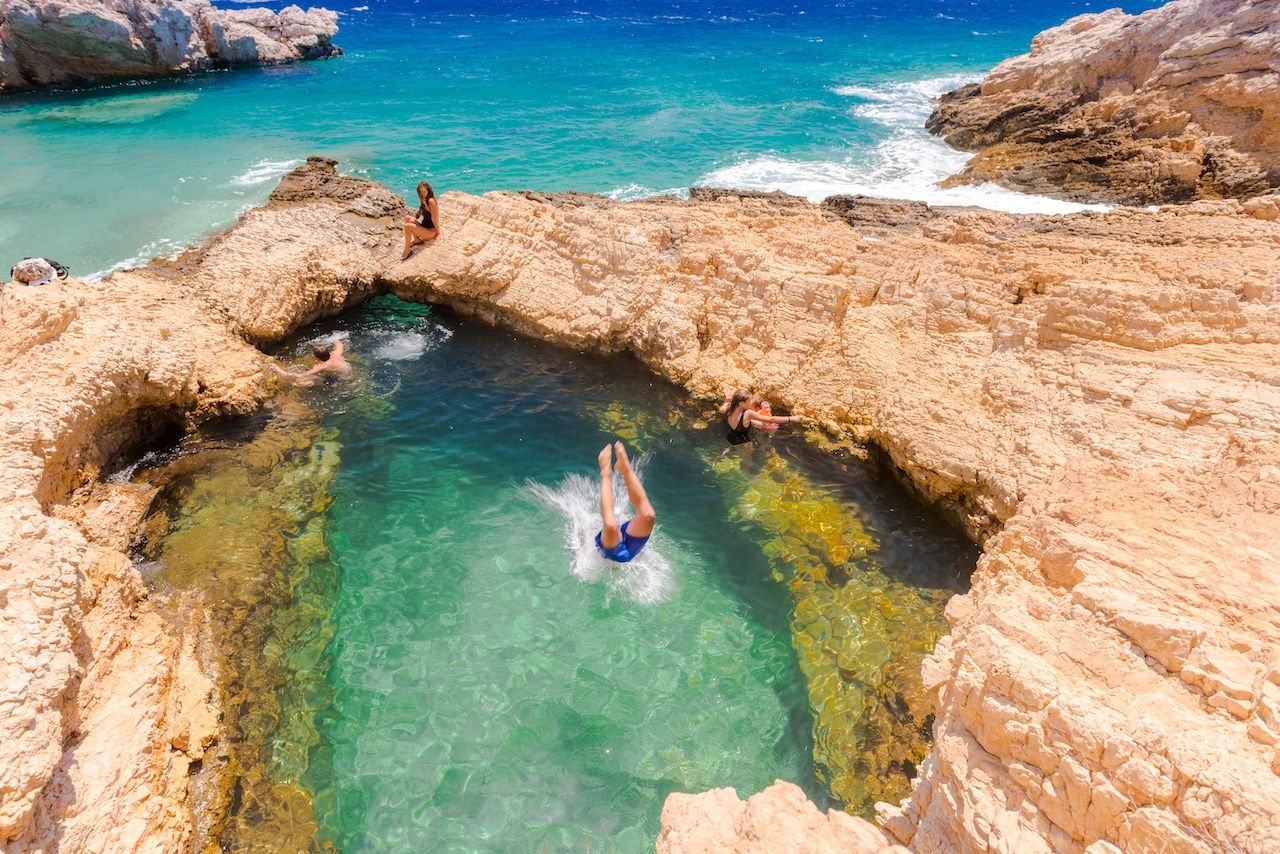 If you want an island where you can just land, strap on your sneakers, and explore some of the most beautiful beaches in Europe, Koufonissi is your spot. Or, more specifically, Pano, or Upper Koufonissi. This region of the Cyclades is actually three islands, though Pano is the only one really set up for visitors. Land ashore and throw on some sunscreen, then begin your trek around the two-square-mile island, stopping at any beach you can find. Back on the main settlement, seaside tavernas await to refuel you after a long day.

If walking the island in search of secluded beaches sounds too exerting, small boats will take you to more popular beaches like Pori Beach for about $6. There you can relax with a cocktail at Kalofego before strolling back to the harbor. Or head to Fanos where a natural swimming hole leads you out to the ocean via an underwater passage. 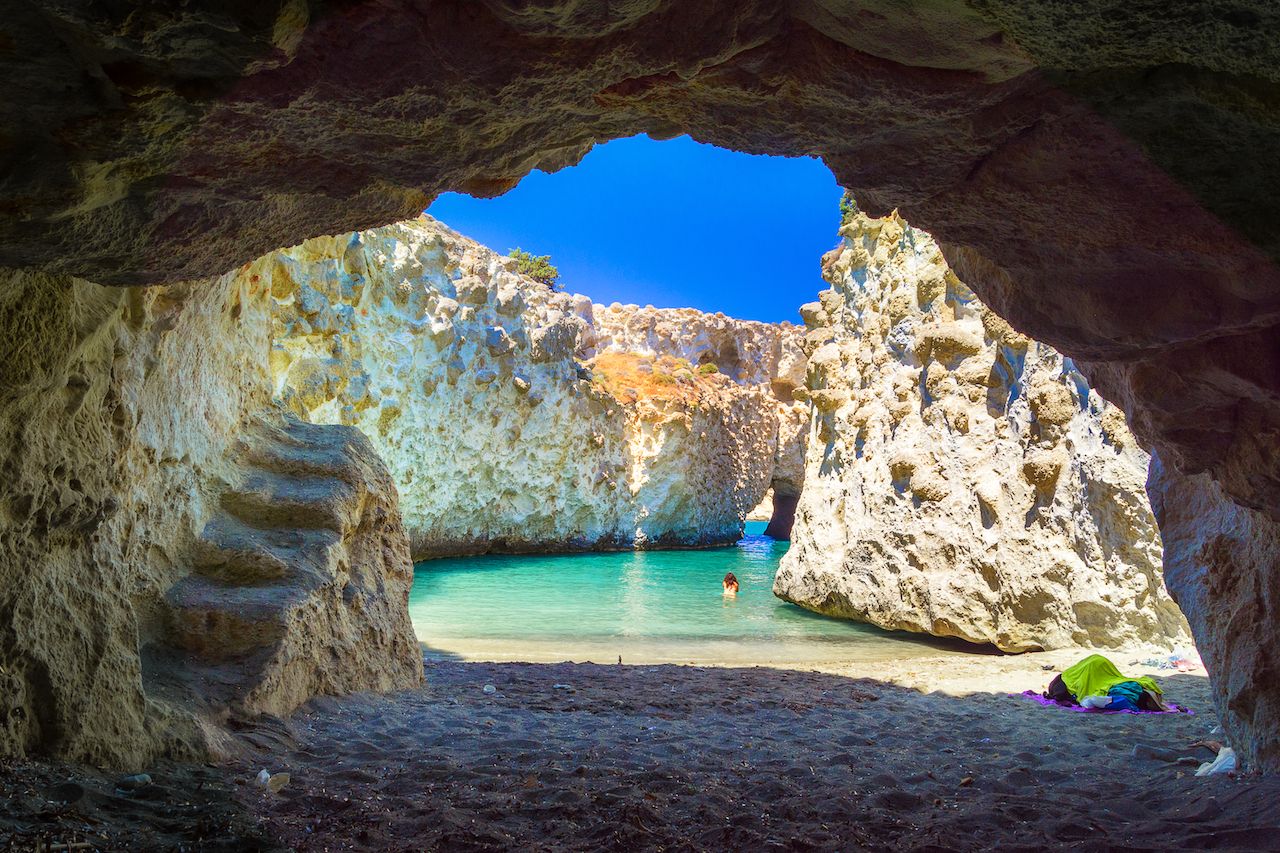 The problem with a vacation to a small island is that you sometimes run out of stuff to do. Not the case in Milos, where the history, geography, and beaches make it the odd island you can visit a few times without getting bored. The volcanic island in the Cyclades is most notably where the Venus de Milo was discovered, but functionally, it was a rich source of minerals for centuries.

Unless you’re an avid geological tourist, what you’ll really want to come here for are the beaches. Milos has over 70 of them. From the white cliffs and turquoise-clear water at Kleftiko Beach to restaurants that cook your food in the sand at Paleochori, Milos’s beaches offer stuff you just won’t find elsewhere. Take a boat out along the coast and you’ll see the fascinating rock formations that line the island. Or stay inland and wander through history in its countless catacombs and an amphitheater that once sat 7,000. 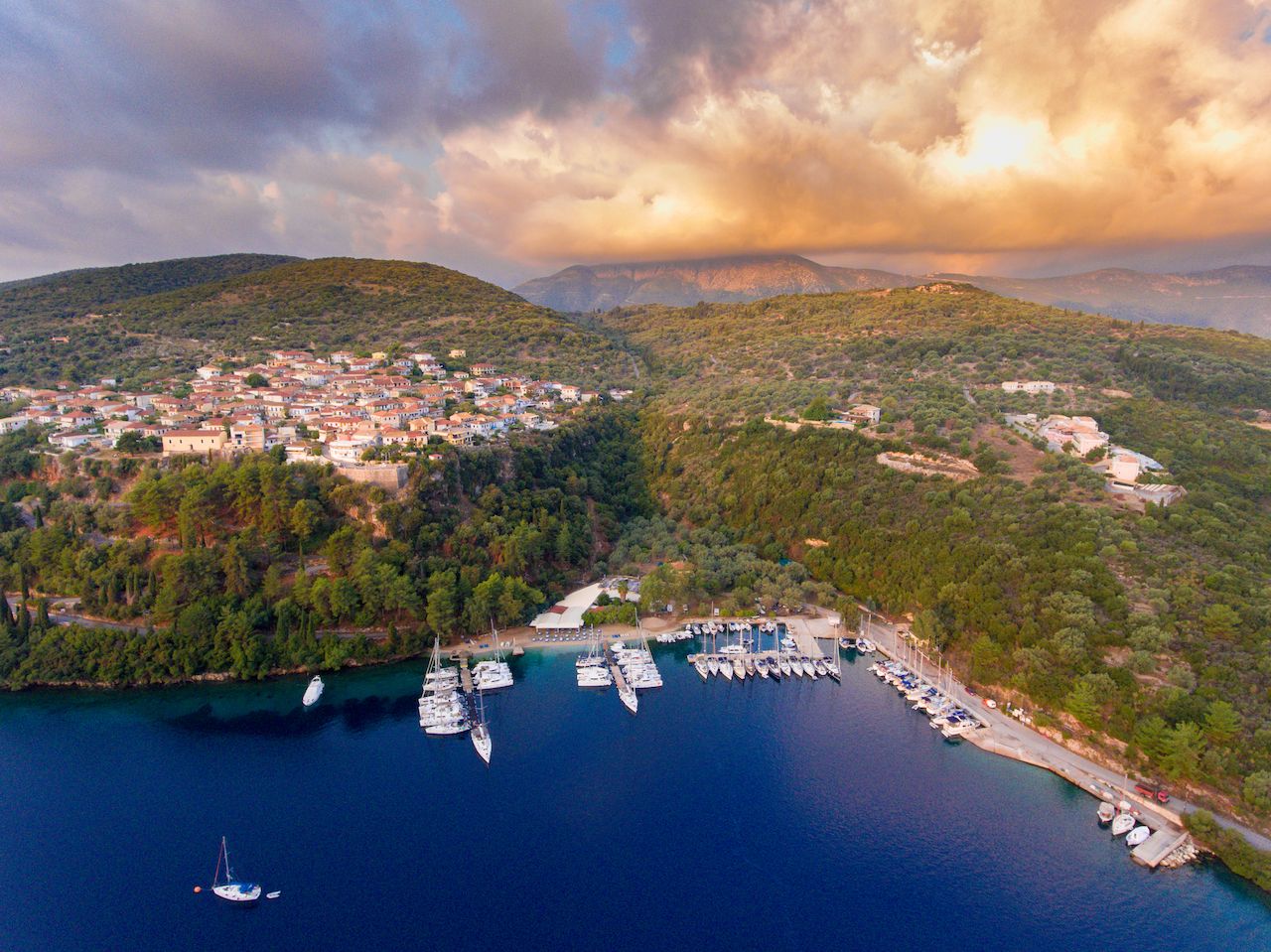 The fact that this Ionian island sits just a short boat ride from the spot where Aristotle Onassis married Jackie Kennedy should tell you a little about the perfection of its isolated setting. Getting here involves flying to the tiny airport at Preveza then taking a 40-minute taxi to the coast and a 15-minute boat trip to the capital of Vathi. Or you can tender in from your yacht, which is why the world’s elite are slowly moving into this 7.7-square-mile paradise.

For now, it’s still a relaxing little island of 2,000 people where most visitors who don’t arrive by yacht are sailing enthusiasts frequenting the seafood tavernas for dinner. Like most of the Greek islands, the restaurants have fish caught that morning and charge about half of what you’d expect in America. And if you get tired of the options in one of the island’s three villages, it’s only a short walk to one of the other two. 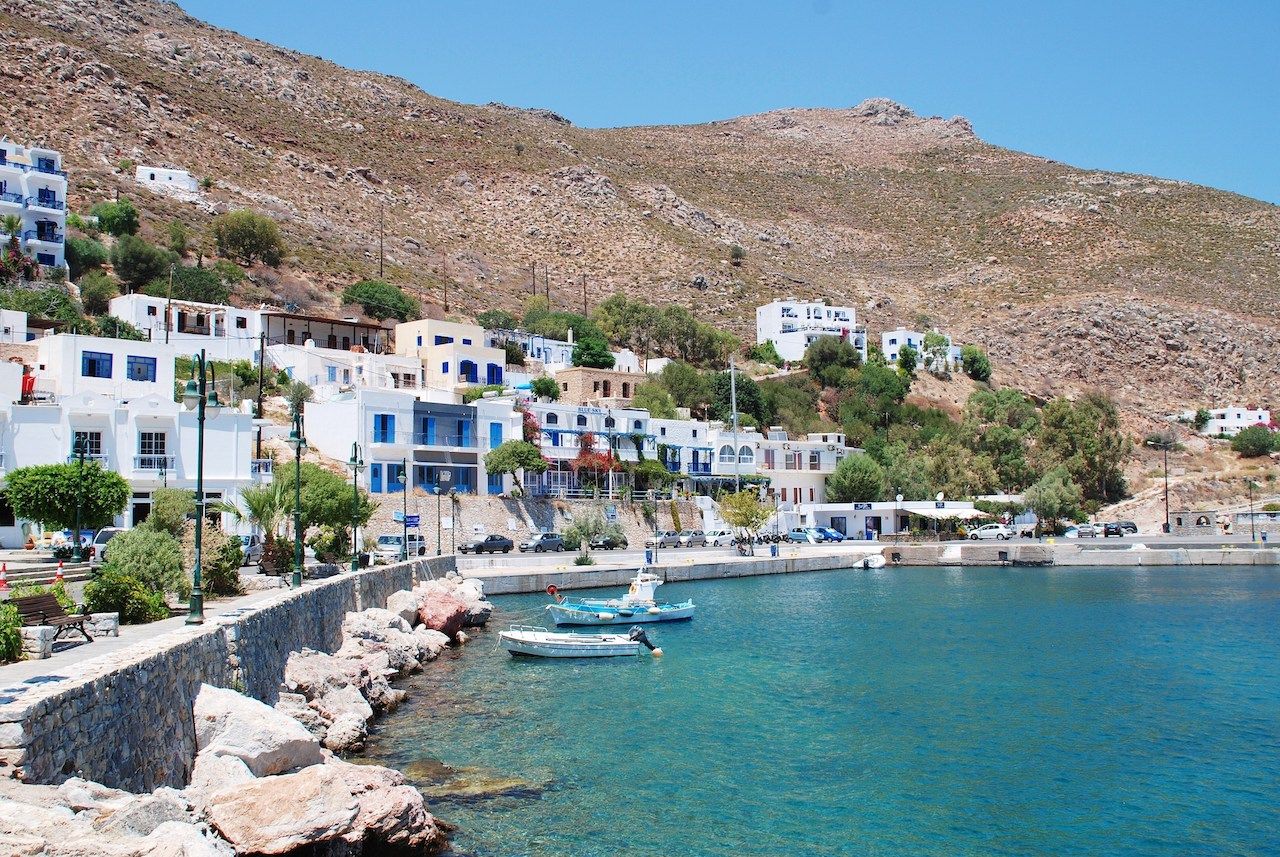 For pure, unadulterated nature in the Greek islands, you’re not finding many places better than Tilos. This island about 50 miles northwest of Rhodes is largely a protected ecological park, a birders paradise full of goldfinches, bee-eater, Bonelli’s hawks, and dozens of other species. It’s also the last place elephants roamed in Europe; four thousand years ago, Dwarf Elephants called Tilos home. Their remains were discovered in Charkadio cave in 1971, which you can still visit today.

No swath of Greek island nature is complete without beaches, and the sands at Eristos and Agios Antonio are as good as you’ll find anywhere in the region. What you won’t find much of, however, are crowds, since Tilos’s beaches still remain very much under-the-radar. 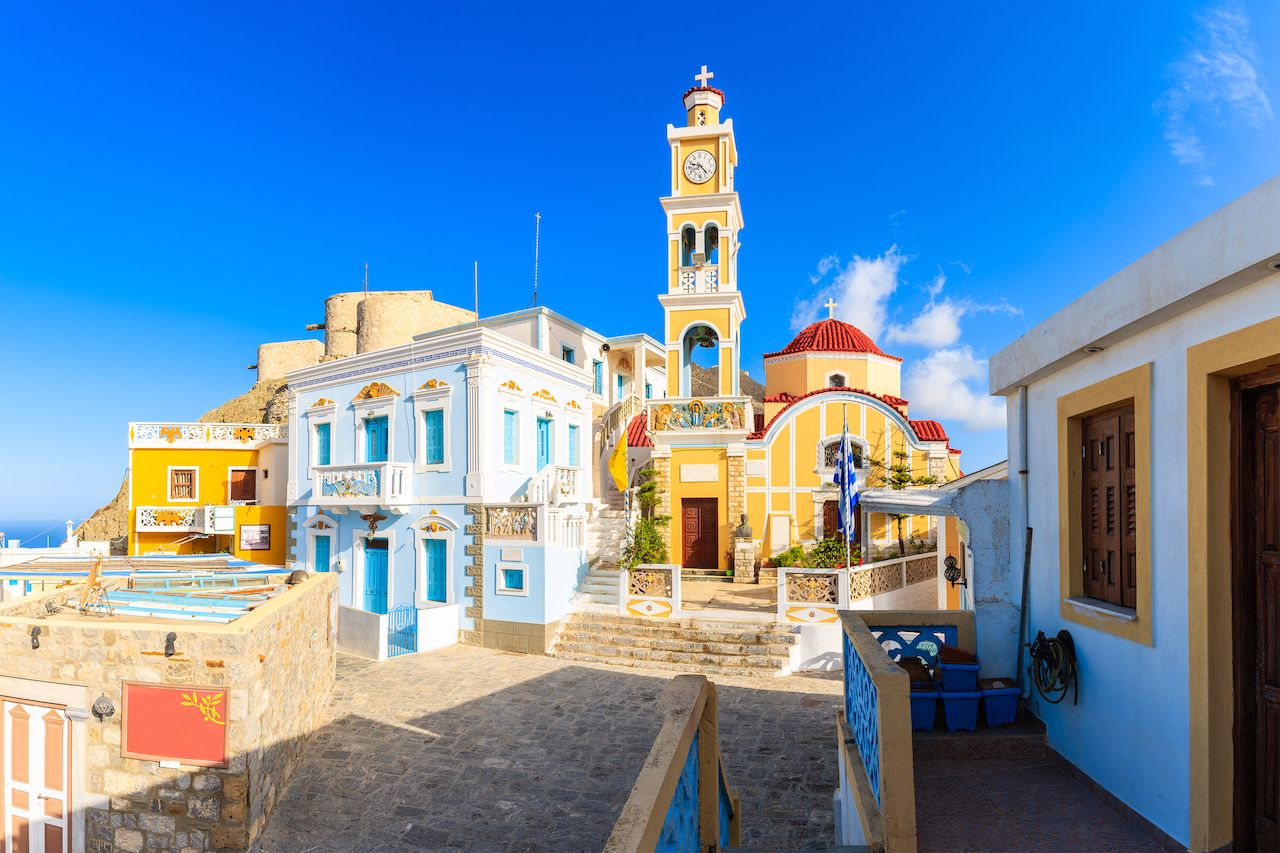 The old world lives on in Karpathos, an island of about 6,500 people where locals will still wander out of their houses and strike up conversations with visitors on the street. Those villages are often colorful collections of small homes set into a mountainside, the most notable of which is Olympos. Here you’ll find people speaking their own dialect and keeping their old customs, an effective snapshot into the Greece of centuries ago.

Karpathos also has over 20 beaches, with a variety of scenery from Kyra Panagia and its perfectly clear blue waters to the emerald coastline at Apella. Windsurfers will find the best winds at the inlet of Saria, and divers will be delighted to find copious shipwrecks, including one of Europe’s newest discovered, between Karpathos and Kassos in 2015.

TravelThe Peloponnese Belongs on Your Must-Visit List in Greece
Tagged
Beaches and Islands Insider Guides Greece
What did you think of this story?
Meh
Good
Awesome