The Peloponnese, the mulberry-leaf-shaped southern peninsula of mainland Greece, may not be the first destination that comes to mind when planning a trip to the cradle of Western civilization. The historical city of Athens and picture-perfect islands of Mykonos and Santorini have arguably established themselves as Greece’s must-gos. But the well-kept secrets of the Peloponnese and the region’s landscape of contrasts will make you feel like you’ve discovered a whole new world.

Green valleys and lunar landscapes, coastal towns and mountainous villages, Spartan warriors and Olympic games — the Peloponnesian peninsula beguiles visitors with its rich history and stunning vistas. Rent a car and plan to spend at least three days exploring this ancient and captivating region. Here’s why the Peloponnese is one of the most special places in Greece.

The Olympics were invented in the Peloponnese, and the Olympic torch always starts here. 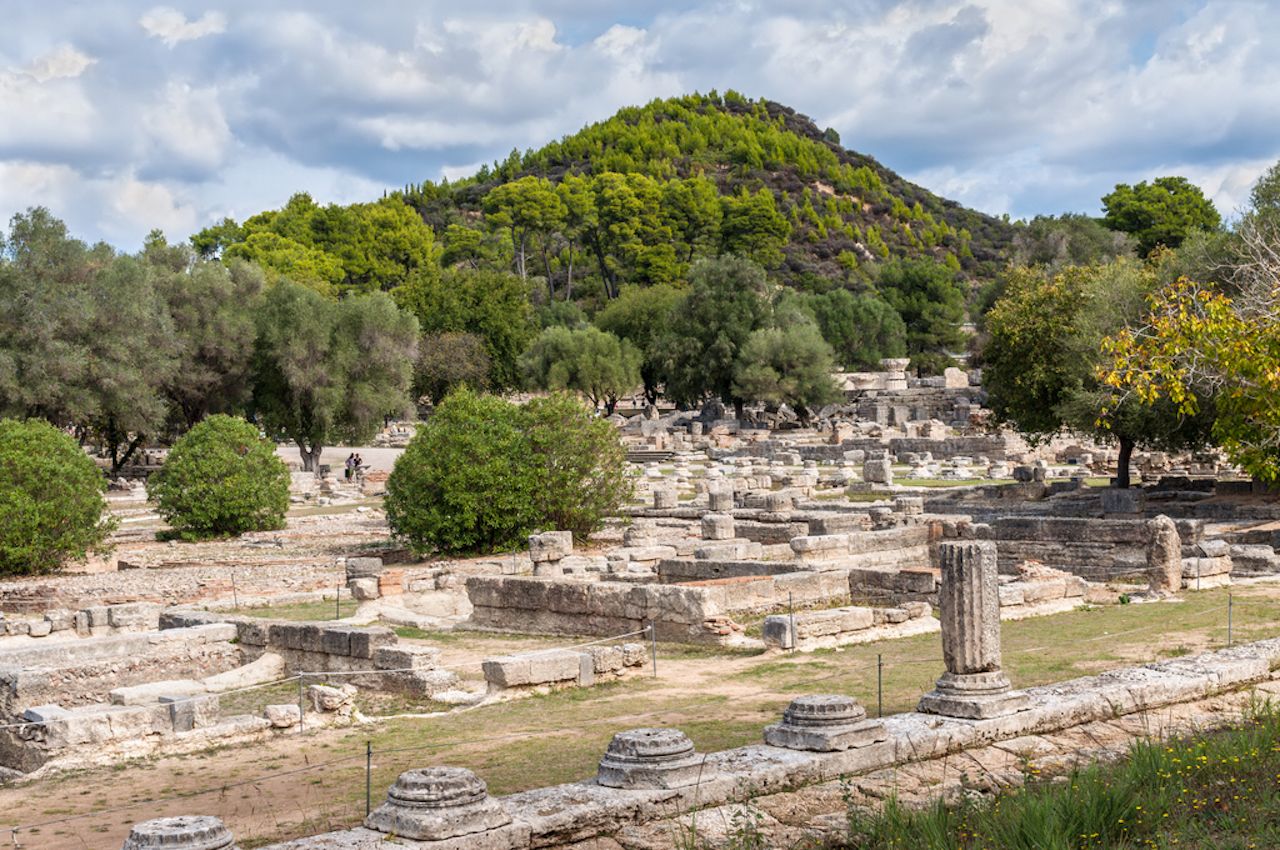 The Peloponnese brims with history, myths, and legends about Heracles and the Gods of ancient Greece. This is the region where Spartans were born and trained to become invincible warriors, as well as where the Olympic Games occurred for the first time.

In the western Peloponnese, the Archaeological Museum of Olympia hosts the renowned marble sculpture of Hermes of Praxiteles, and every four years from the Temple of Hera, the Olympic flame starts its journey around the world. A short drive from Olympia stands the Temple of Apollo Epikourios, Greece’s first monument to be included among UNESCO’s World Heritage sites.

In the Peloponnese’s northeast are the ancient city of Mycenae and the Archaeological Museum of Mycenae. Mycenae has given its name to an entire era between the 12th and 17th centuries BC, and it’s considered the birthplace of Greek civilization. In the same area, the ancient theater of Epidaurus, which is still used today during the annual summer Epidaurus Festival, is known for its startling acoustics. 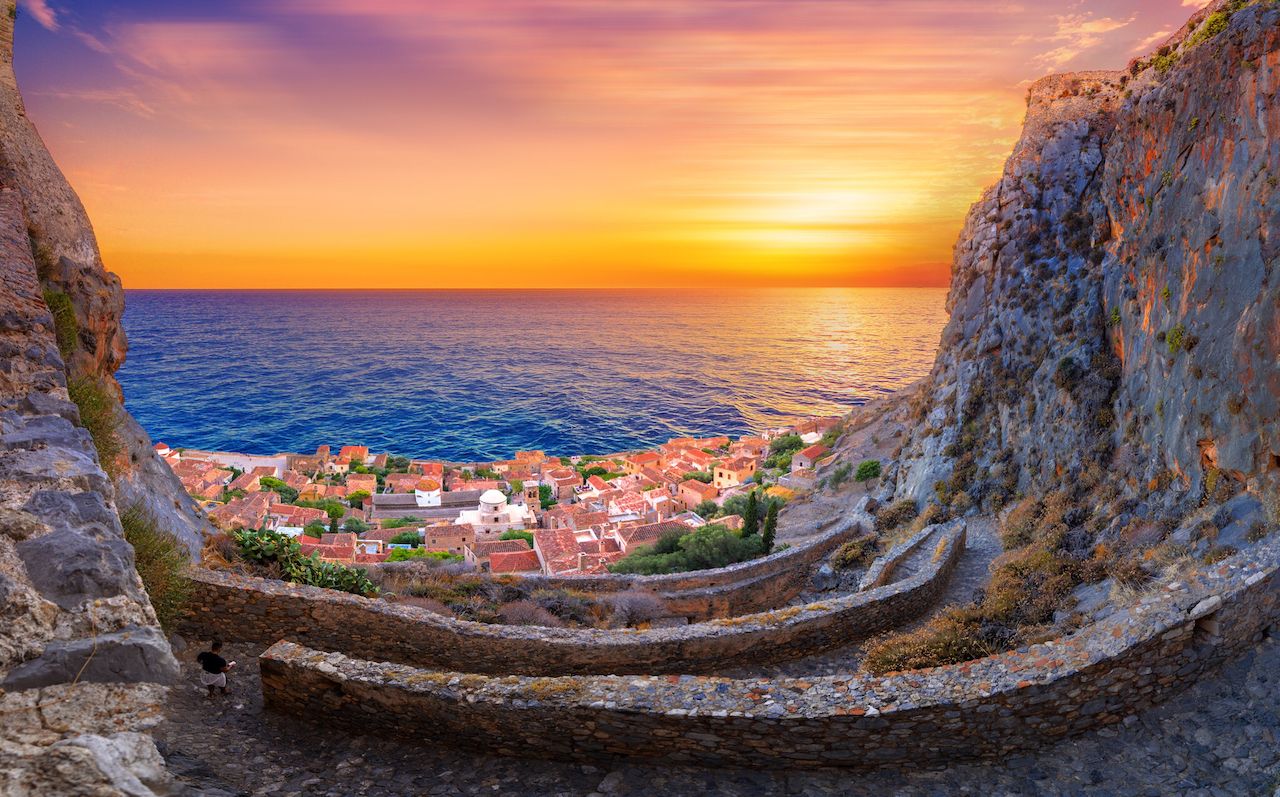 The rich history didn’t end with the Greek Empire. Throughout the centuries, Byzantine, Ottoman, Venetian, and Greek castles were erected throughout the Peloponnese — narrating tales of wars, kings, and cultural exchange during medieval times.

Monemvasia, in the southeast arm of the Peloponnese, is one of the most impressive towns in Greece — or really anywhere. In 375 AD, an earthquake separated a massive rock in the Myrtoan Sea from the mainland. A town was built on the far side of that rock, protected by walls and invisible to people on the mainland. A bridge now connects the mainland to Monemvasia, but you still can’t drive in the tiny, car-free town. You’ll walk on the steep, narrow, cobbled streets to see churches, mansions, a medieval fortress, and, nowadays, shops and restaurants. South of the Monemvasia’s medieval walls, the scenic harbor of Portelo is ideal for a dip during the warm months. 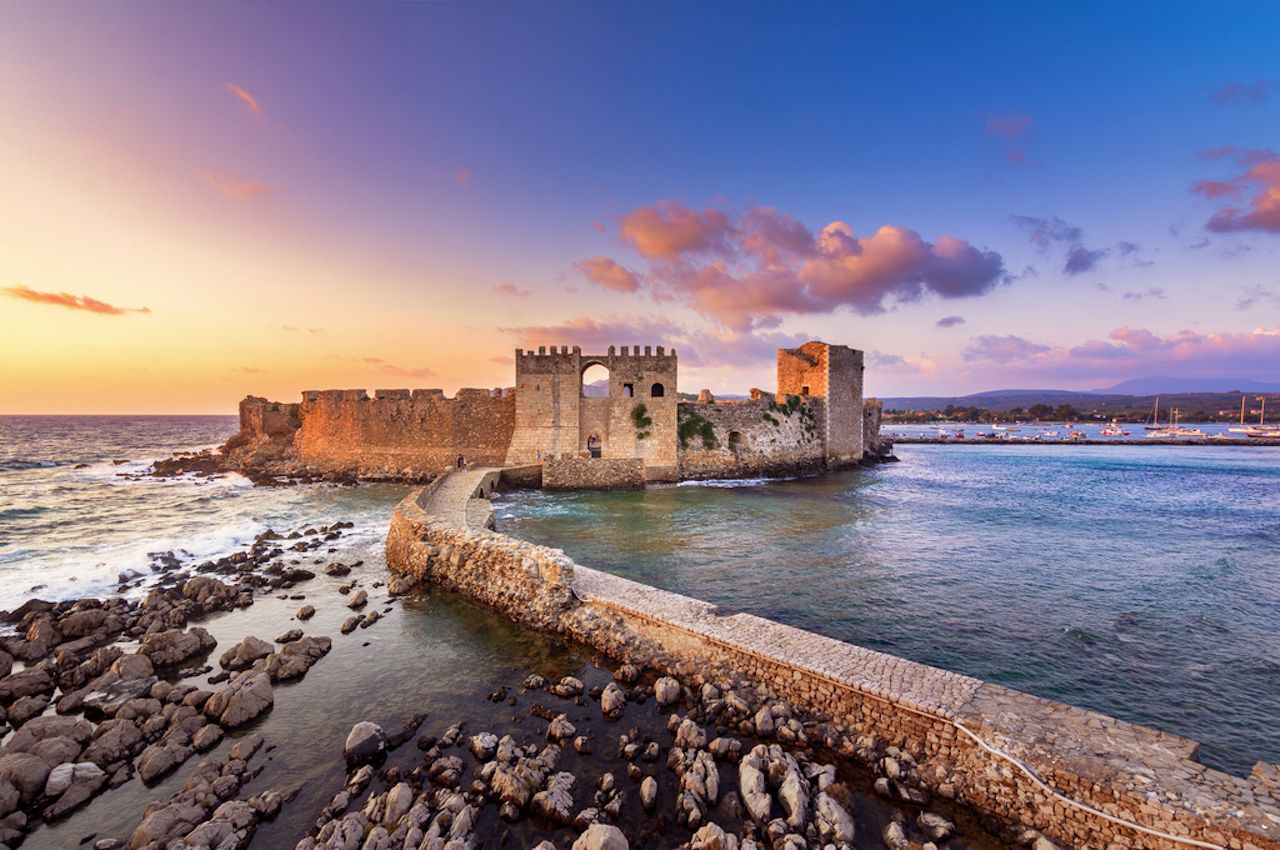 Due west of Monemvasia, in the Peloponnese’s southwestern arm, the castles of Koroni and Methoni are a half-hour’s drive from each other. These fortresses overlooking the Ionian Sea are excellent spots to watch the sunset; just note that in winter they close quite early. In the south-central area of the Peloponnese, four miles from the historic city of Sparta, the castle of Mystras is a fine example of Byzantine art and a UNESCO World Heritage site. 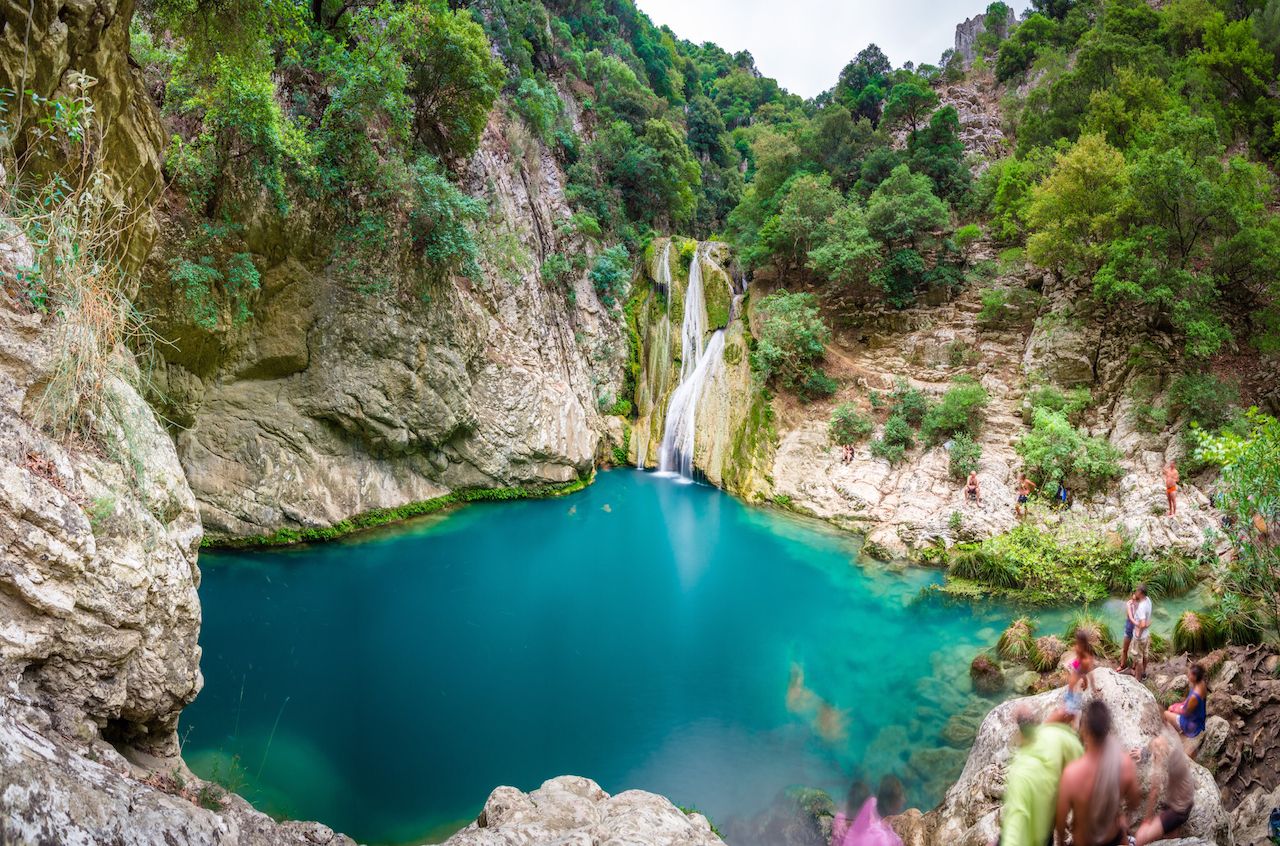 Beyond the mesmerizing relics of ancient empires, the Peloponnese brims with natural beauty. From the village of Charagvi, in the southwestern area called Messinia, you can embark on several hikes in varying levels of difficulty across densely vegetated trails leading to a network of 15 lakes.

Reflecting its topography, the lake area is called Polylimnio, or “many lakes.” It’s a fairytale-like setting of swimmable blue lagoons, waterfalls, and streams amid wooden bridges, rocks, and native flora. Not all lakes are open to the public, but be sure to check out both the heart-shaped Lake Kadoula and the over-60-foot-high waterfall that cascades into Lake Kadi.

Fifty-three miles north of Polylimnio, river Neda’s waterfalls plunge fiercely into an impossibly blue natural pool. As the myth goes, the river was formed when the daughter of Uranus (Sky) and Gea (Land) hit the arid land with her wand. Neda crosses a 20-mile long gorge and, along its journey, forms many mini lakes and waterfalls. The impressive canyon is accessible from May to September. If you are up for the five-hour-long trek, which entails swimming in cold waters and passing through a dark cave, you must hire an experienced guide.

The beaches are varied and idyllic. 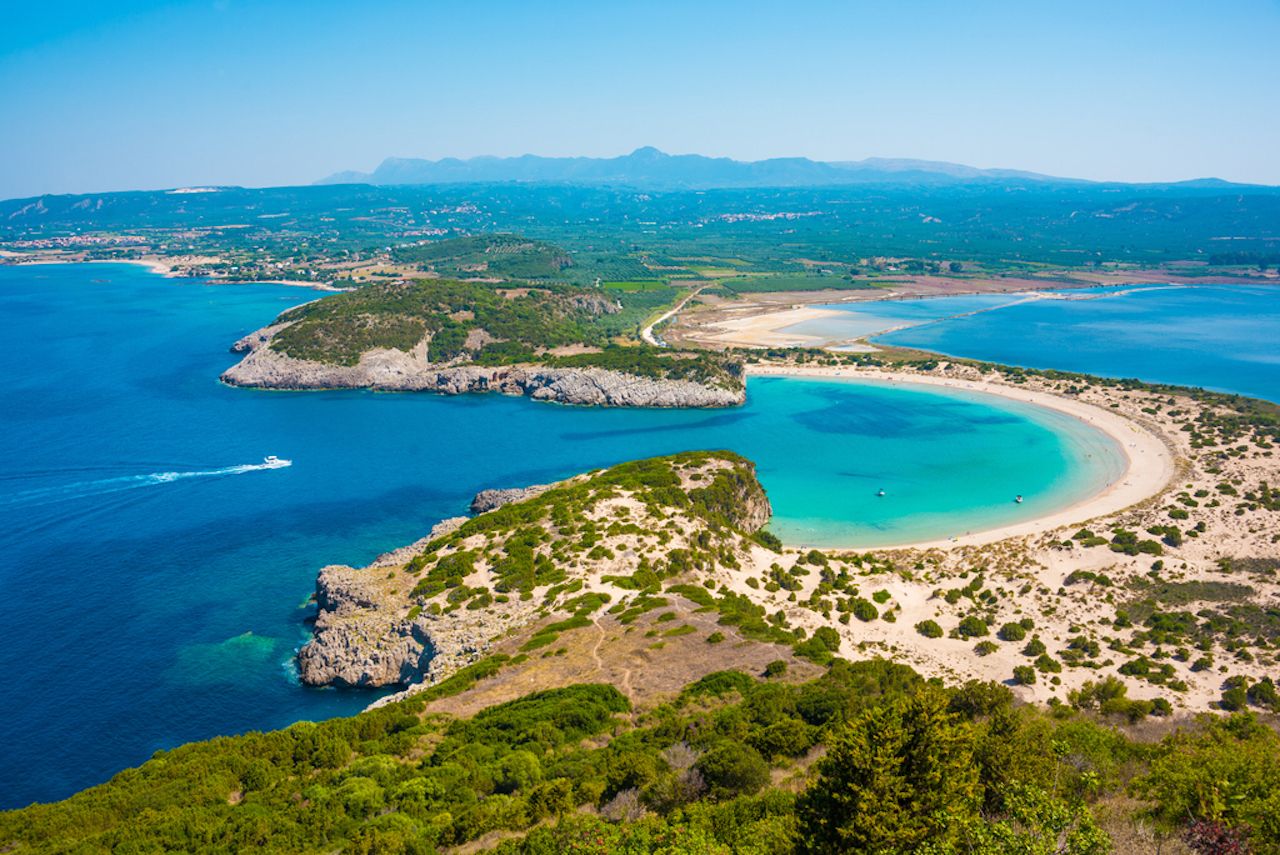 The Peloponnese is a peninsula of 8,000 square miles with arms extending off of it, creating a seemingly endless coastline where one beach leads to another and yet another. Here, it’s nigh-on impossible to choose a favorite beach — but we’ll name a few standouts.

In the Messinia region, Voidokilia, or “the belly of an ox,” is a C-shaped beach of fine white sand and shells. Free camping isn’t allowed due to the beach’s protected biodiversity. An hour north of Voidokilia, also looking out onto the Ionian Sea, Kalo Nero (“calm water”) beach is the second most important breeding habitat of the sea turtle Caretta Caretta. Also, Kalo Nero is the estuary of river Neda. North of Kalo Nero, Kaiafas beach has dunes, a seaside pine forest, and a vibrant ecosystem. Across the road from the beach are Kaiafas lake and the natural Kaiafas springs.

In Lakoniki Mani, the middle arm of the Peloponnese, Mavrovounio is a three-mile-long beach with plenty of sunbeds and umbrellas. The afternoon breeze is ideal for windsurfing. In the far south of the Lakonia arm, Marmari beach is enclosed in a rocky setting of wild beauty. Its gentle, shallow waters are wonderful for young families.

The first capital of Greece was in the Peloponnese. 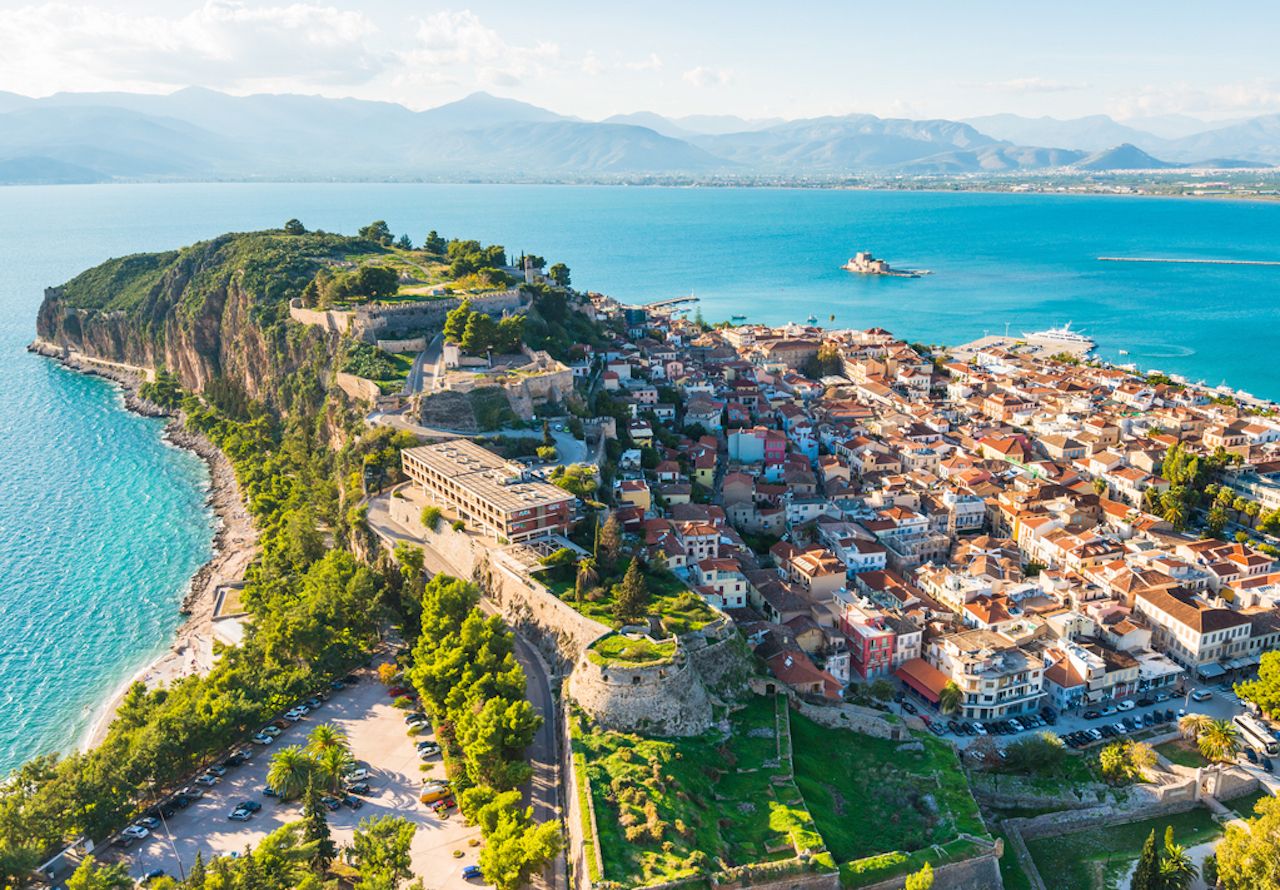 Nafplio, modern Greece’s first capital city, is often acclaimed as the country’s most romantic destination. This seaside town has picturesque architecture reflecting Venetian and Ottoman influences, and it’s one of the most popular weekend getaways from Athens at any time of year.

Nafplio has three castles, each offering a lovely view onto the city. The city’s attractive boutiques, cafés, taverns, and bars are all open until late at night. The pebbled beach of Arvanitia is winter swimmers’ favorite. In summer, the beach transforms into a buzzing hotspot with loungers and a bustling bar.

The Peloponnese is also packed with adventure. 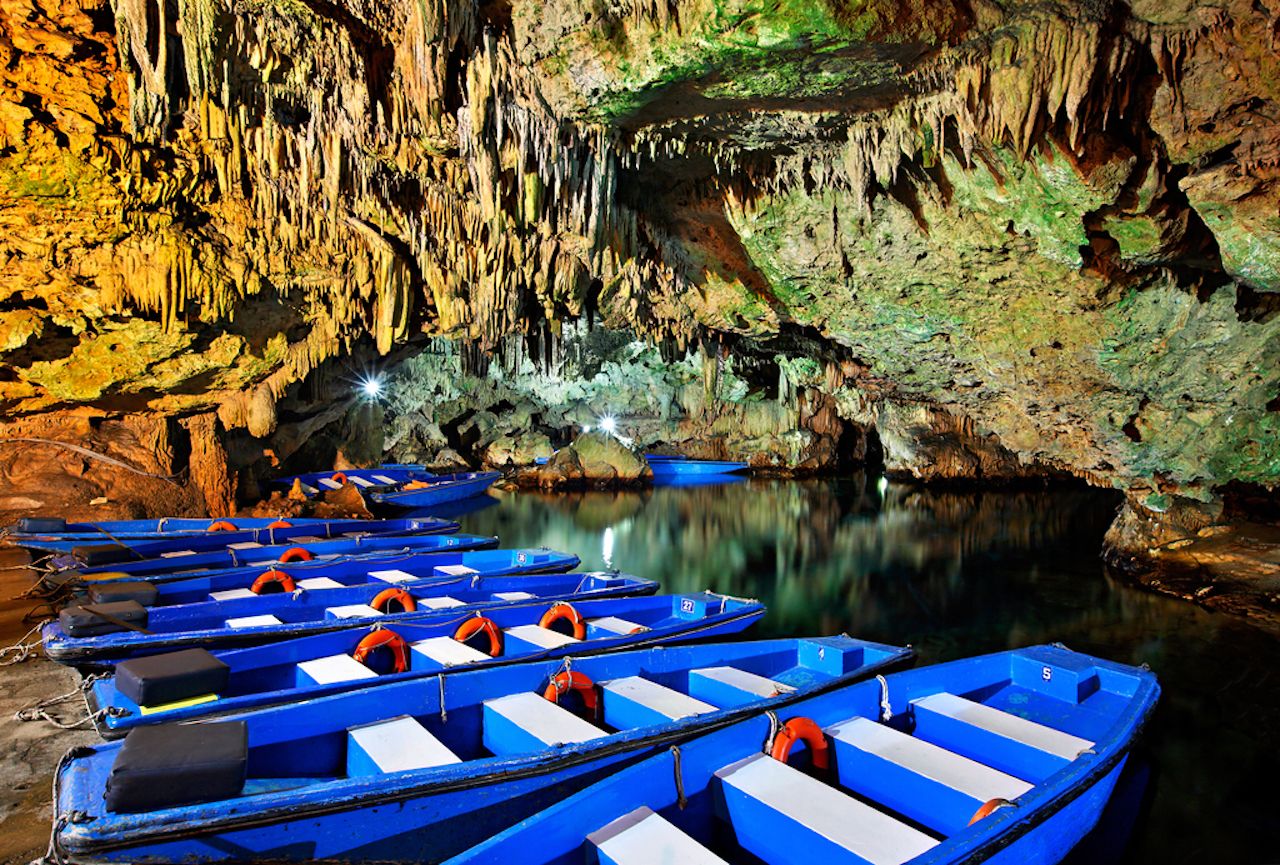 The caves of Diros on the west coast of the Laconia subregion are stunning natural wonders worth ducking into. Inside the caves, speleologists have found fossils of panthers, hyenas, lions, and hippopotamuses, as well as ceramic items indicating human presence. The breathtaking tour lasts about 25 minutes and takes visitors through lagoons and rocks.

For water-sport enthusiasts, rafting in the Lousios and Alfios rivers in Orini Arkadia is an unmissable experience. The entrance to the Peloponnese peninsula at the Canal Corinth Bridge is the place to try bungee jumping. The canal, which links the Gulf of Corinth to the Saronic Gulf, is also one of the landmarks of the Peloponnese. Boats cross the narrow getaway offering one-hour cruises during which guests can even celebrate special occasions.

On the north end of the Peloponnese, the train known as Odontotos, or “tooth,” was of vital importance for the population of Kalavrita in the 1890s, before it became an attraction. The one-hour journey from Diakofto to Kalavrita follows the gorge of the Vouraikos river, passes through pine forests and tunnels, and travels over small bridges until it reaches 2,460 feet above sea level. If an easy, albeit six-hour-long, hike doesn’t intimidate you, follow the rails and walk along the river.

The history of wine is ancient and ongoing. 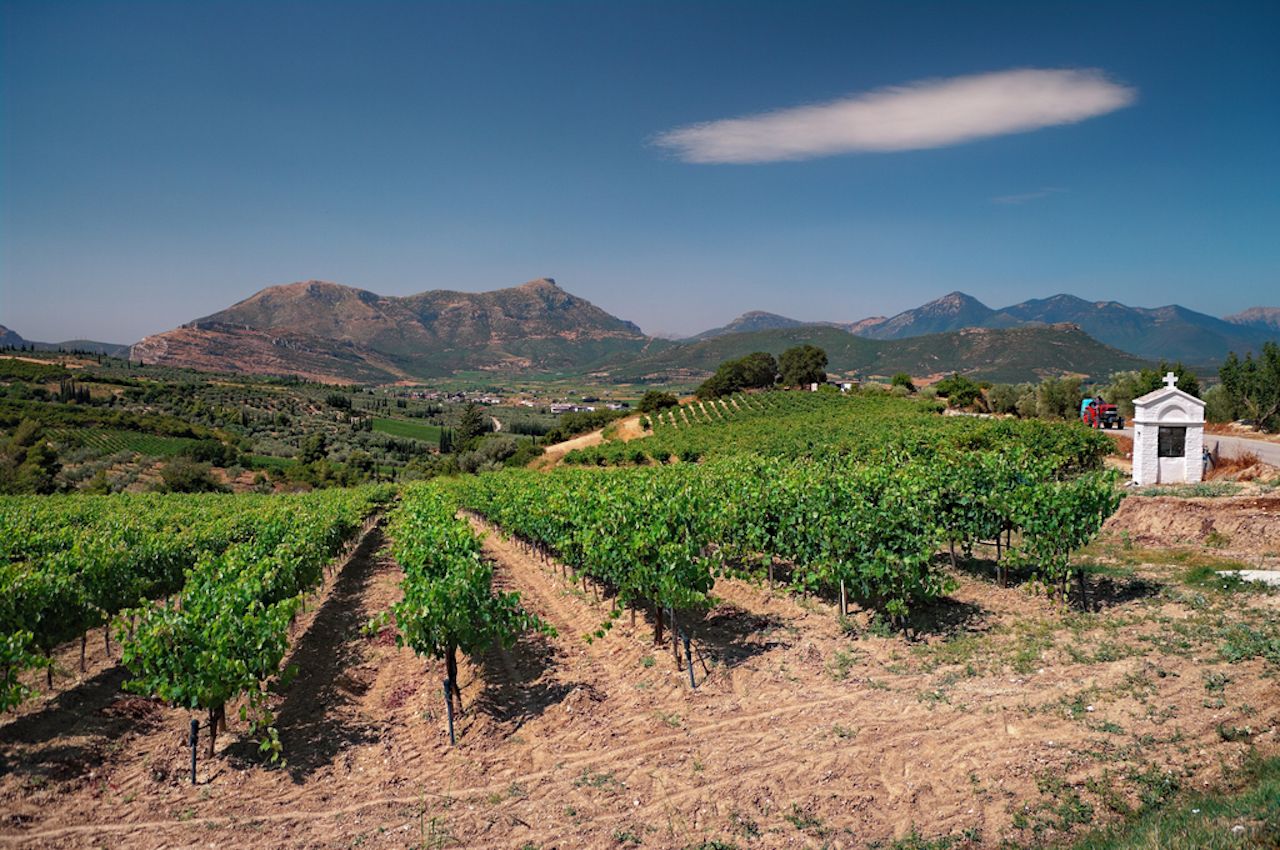 Beyond Nafplio, wine consumption in the region of Nemea goes 2,500 years back. The Wine Roads begin from the ancient site of the Temple of Zeus in the central-west Peloponnese and unroll along the valley of Asopos river. Three miles away from the ancient site, the medieval Byzantine Monastery of Panagia Vrachos (“Virgin Rock”) offers excellent views to the valley, which is at its glory in autumn during the vine harvest.

Explorers of the Wine Roads have 35 wineries at their disposal. Each winery is free to visit, and tours of the production, ripening, and aging halls are available. Of course, wine tasting — especially of the red local variety called Agiorgitiko — is encouraged. Avid cyclists will be happy to know that the Wine Roads are better cruised on a bicycle.

The food is fresh, local, and unforgettable. 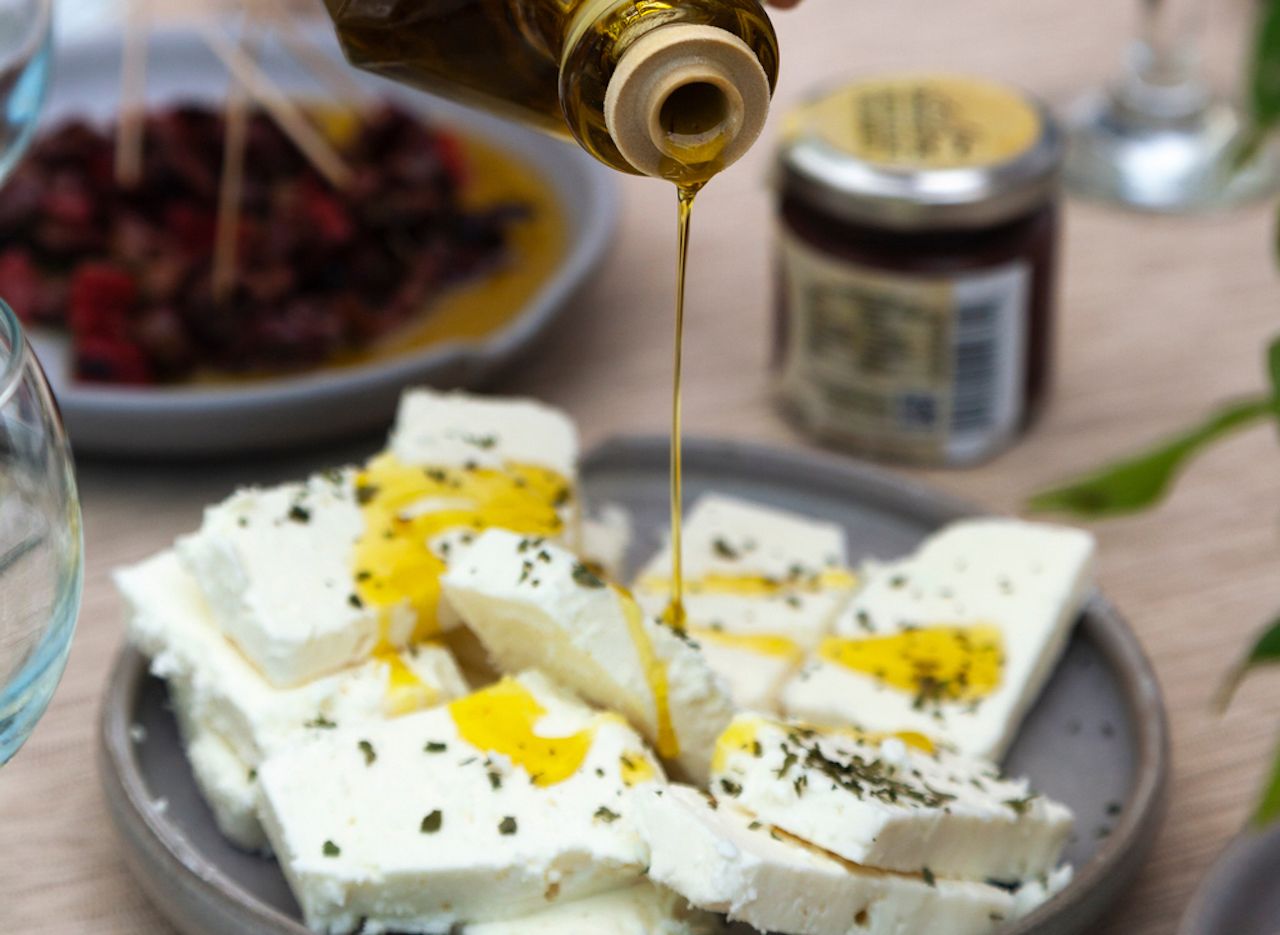 The food itself is a reason to travel through the Peloponnese. You should visit different villages and towns to try as many of the local recipes as possible — since they vary from one subregion to another. From the coastal Pilos and Kardamyli in Messenia and Limeni and Gerolimenas in Mani to the mountainous Dimitsana and Karytaina in Orini Arkadia, the cuisine is based on fresh produce such as artichokes, figs, citrus fruits, seasonal vegetables, local seafood, and organic meats. In most, if not all, Peloponnesian dishes, olive oil flows abundantly, and olives accompany every meal. 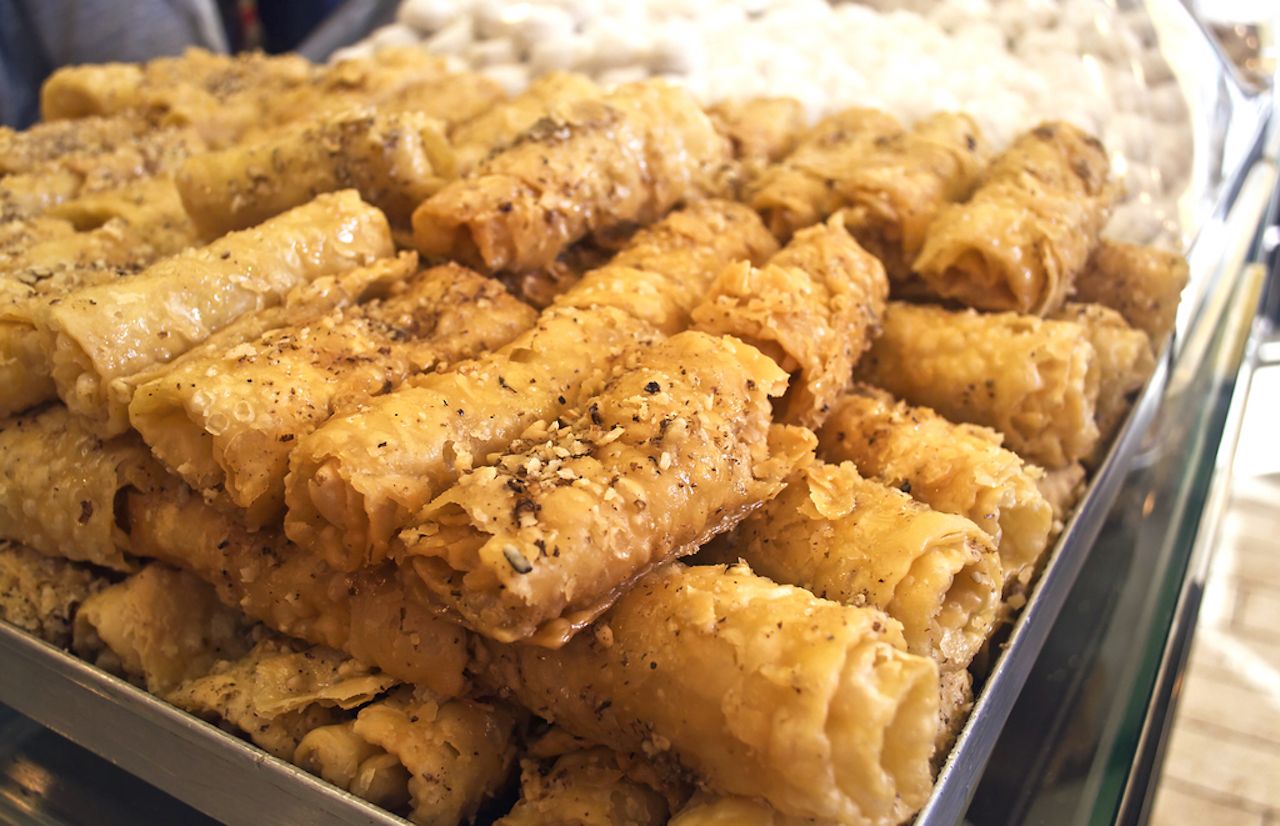 An excellent way to mingle with all generations and grasp the Peloponnesian culture is to join a Peloponnesian panegyri, a religious celebration that is followed by live music, food, and alcohol. If you have a sweet tooth, try the fried diples, folded dough sheets covered in honey, cinnamon, and ground walnuts, and the olive cookies.

CultureWhy the Greek City of Thessaloniki Needs To Be on Your Radar
Tagged
Beaches and Islands Travel Trip Planning Greece
What did you think of this story?
Meh
Good
Awesome

I Won’t Fly Without This Useful Travel Gadget, and It’s on Sale for $30 Until July 13
This Airbnb in North Carolina Has a 75-Foot Water Slide Into a Lake
A Study Found the 10 Hotels With the Most Beautiful Views Around the World
A Music-Lover’s Guide To Macon, Georgia, the Birthplace of Southern Rock
The 5 Best, and Worst, States for a Summer Road Trip

In Greece, a Shipwreck From 500 BCE Is Opening as an Underwater Museum

9 Dreamy Airbnbs in the Greek Islands