“Most people, they think we’re in f**king Mexico,” my guide laughs over rum punches on my first night in Guadeloupe. “Like we’re gwa-da-LOOP-ay or something.”

Such is the struggle of Guadeloupe (pronounced gwa-da-LOOP), the French Caribbean island that sits smack in the middle of the Lesser Antilles near St. Maarten and Dominica. AKA nowhere near Mexico. Though it’s one of the larger Caribbean territories, it somehow gets forgotten in North America’s collective consciousness. Which is a shame, because while it doesn’t boast a ton of sprawling all-inclusives or draw glamorous celebrities, it is the perfect way to experience both France and the Caribbean. Here are seven reasons you should make this your next tropical vacation.

1. You’ll feel like you’re hitting multiple destinations at once. 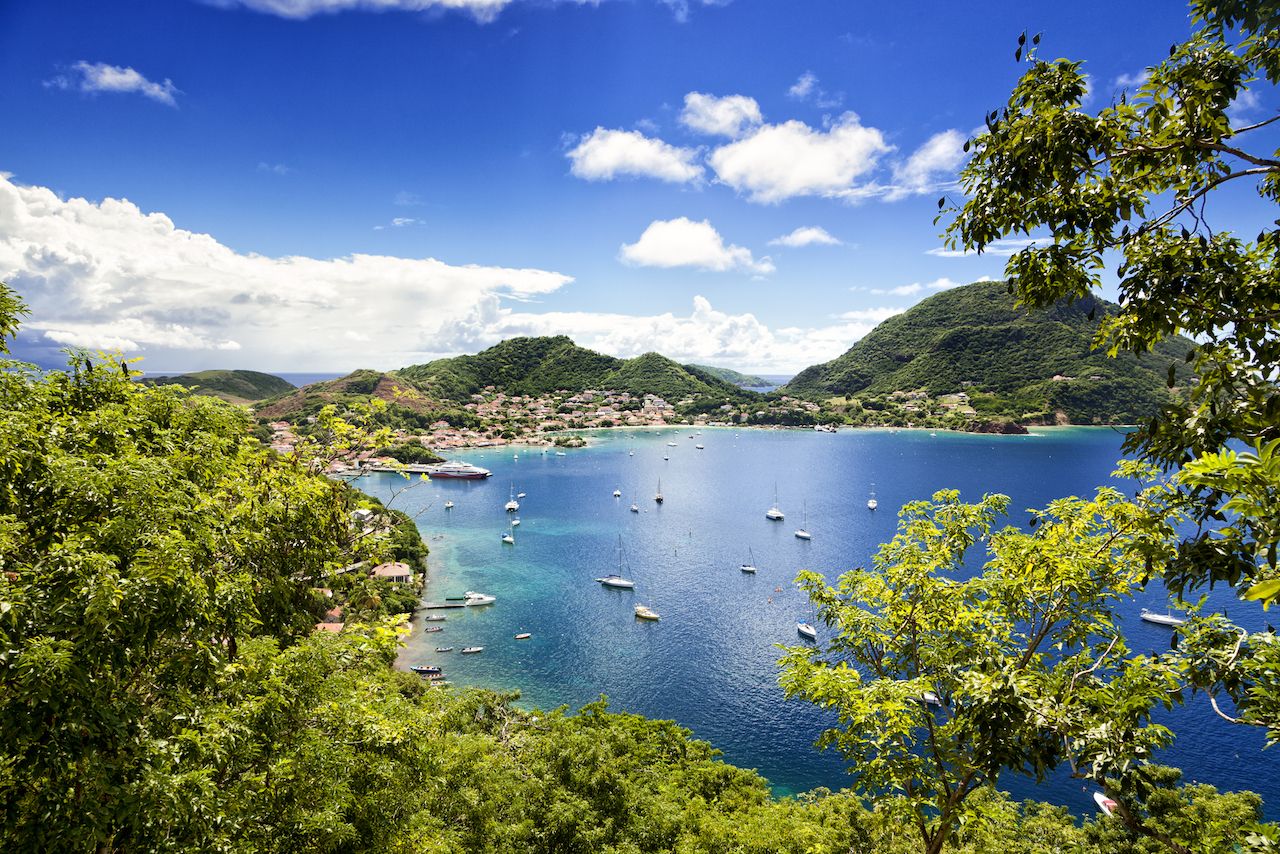 Guadeloupe is not one island but in fact five major islands, with a smattering of other little islands around it. Each one has a distinct feel and experience that makes a trip here feel like multiple vacations in one.

The two most populated are Basse Terre and Grande Terre, close enough together that they need only a small bridge to connect them. Grand Terre is home to Pointe-a-Pitre, the islands’ commercial center, where you’ll stroll through colonial French architecture to Caribbean spice markets. It’s a busy coastal hub with a warm tropical breeze. From there, head out to the easternmost point of the island at the Pointe de Châteaux, where a short, 10-minute walk brings you to the top of sweeping cliffs with views over the island.

Although it’s home to Guadeloupe’s capital of the same name, Basse Terre island is a UNESCO biosphere reserve mostly made up of Guadeloupe National Park. It’s a formidable volcanic island of jagged green mountains and golden coastline, with tropical waterfalls and rainforest covering the landscape.

The smaller islands are Les Saintes, La Desirade, and Marie-Galante. Les Saintes is reminiscent of fishing villages in the south of France, where you can spend hours at a café watching the boats come in. La Desirade has much of the same feel but is even smaller. The fourth “destination” is Marie-Galante. It’s perfect for secluded beaches, with an hour-long boat ride bringing you to palm-lined stretches of sand at the base of emerald mountains. 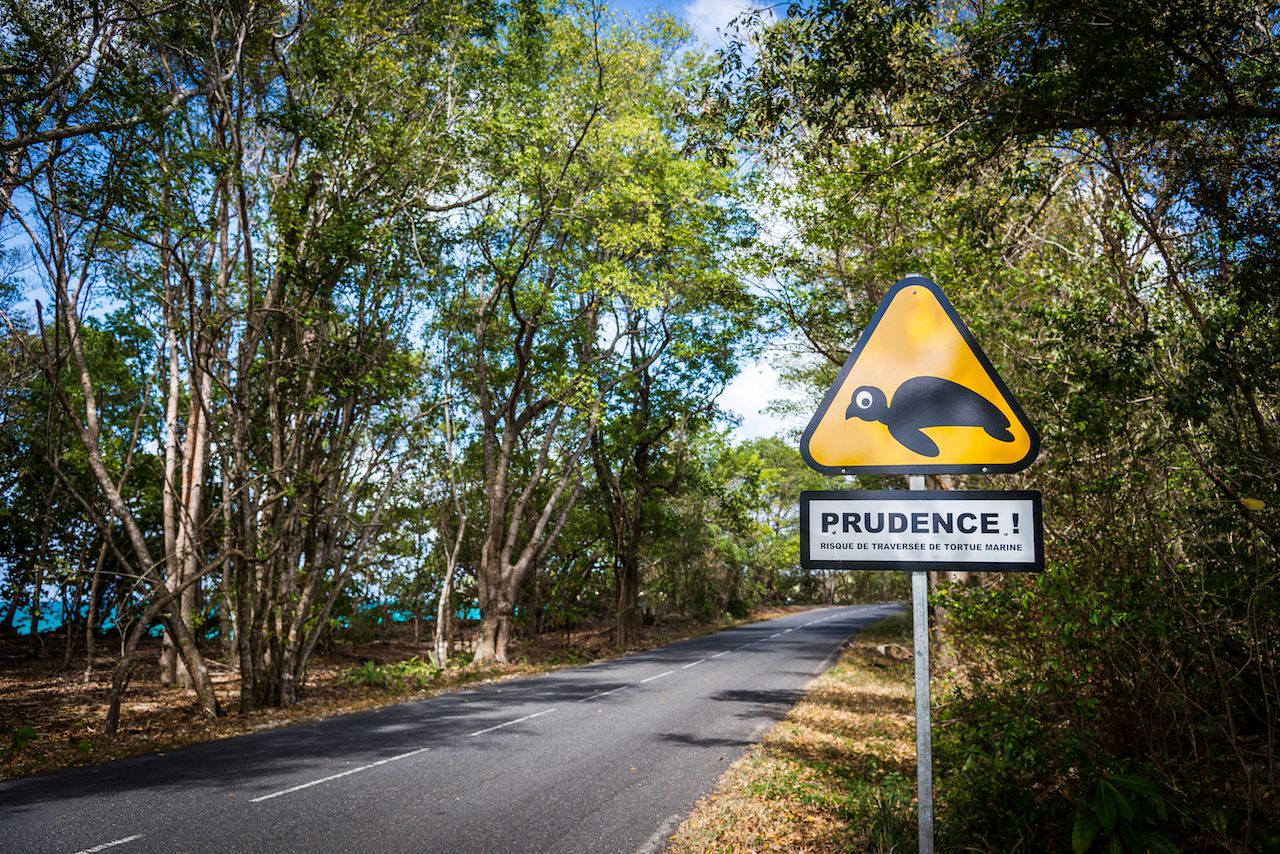 Your first indication that Guadeloupe has adopted the grand French custom of making absolutely no effort to speak English is at the airport, where few if any signs are in anything other than French. Nobody really speaks to you in English, but when you find more bakeries than bars you really don’t mind. Sampling croissants, baguettes, or any kind of irresistible carb is as good as you’ll find in Paris.

Because the island is a French Overseas Department, and therefore part of the European Union, roads are also kept to EU standards, a welcome change for anyone who’s spent a week bouncing over potholes on windy island roads. Guadeloupe also uses the euro, which makes price conversions pretty easy. And even though the islands are only a few hours south of Miami, the television and radio all come from France, so you’ll feel like you’ve crossed the Atlantic every time you turn on the TV.

But the French attitude extends to more than road signs and radio programs. It’s the leisurely, bon vivant pace at which everything on this island is done. Seaside lunches are taken slowly, sipping wine at waterside cafes while waiters casually bring you seafood caught that day. It’s relaxing days tied up on boats near Gosier Island, a tiny island of beaches with a single lighthouse off Basse Terre. Unlike other islands plagued by spring breakers and bachelor parties from the US, drinking in Guadeloupe is actually peaceful. 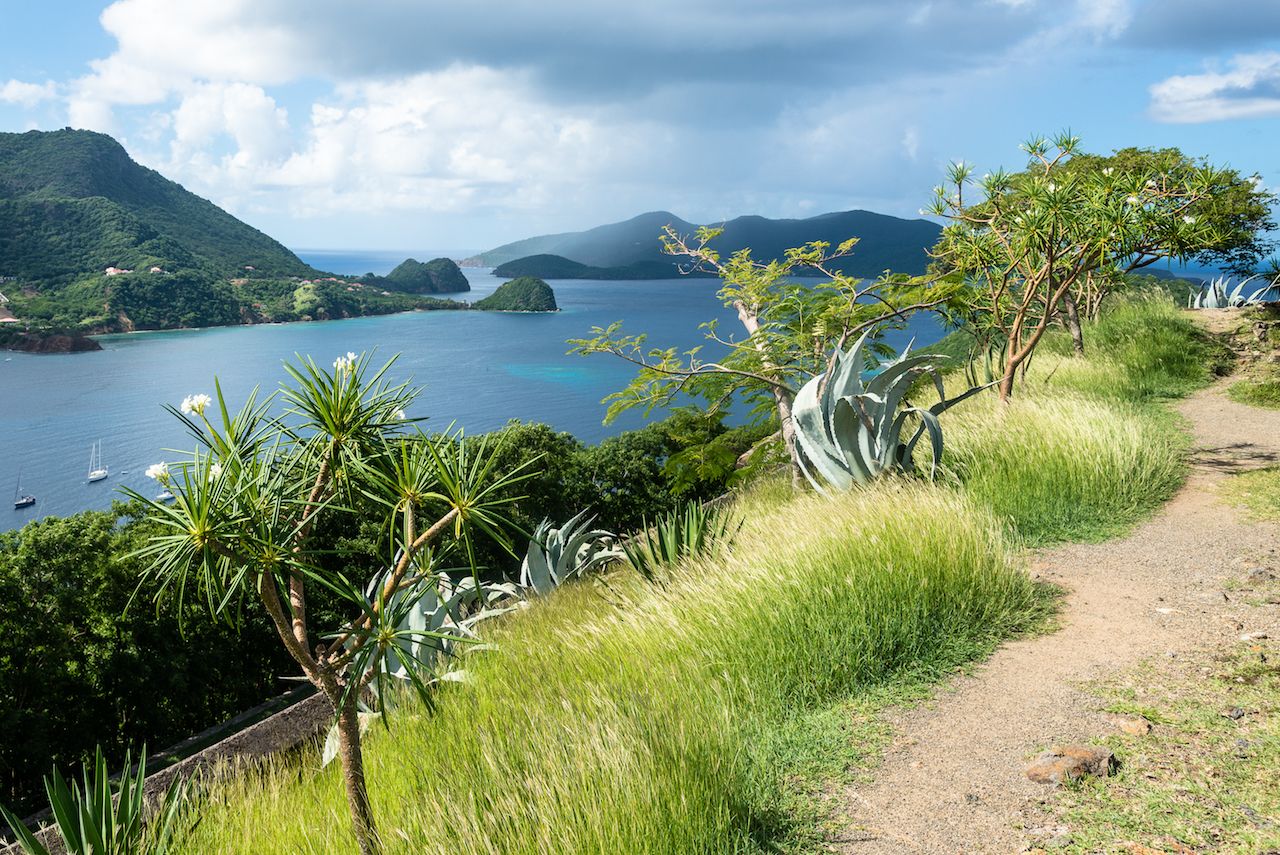 Speaking of those debaucherous select group of Americans who love turning beautiful destinations into their personal cruise deck, you’ll be pleased to know they haven’t gotten their hands on Guadeloupe yet. While you’ll find no shortage of carefree French folks flaunting their bodies on the beaches of Guadeloupe, I went three days without hearing a stranger with an American accent. Not to knock my countrymen, mind you, but the lack of anything familiar is precisely why Guadeloupe is such a unique Caribbean getaway. Despite Norwegian Air running direct flights here for the better part of two years, the throngs of Americans haven’t descended on the place yet. So the experience of doing something completely foreign is stronger here than in other islands.

4. Basse Terre is the tropical waterfall island of your fantasies. 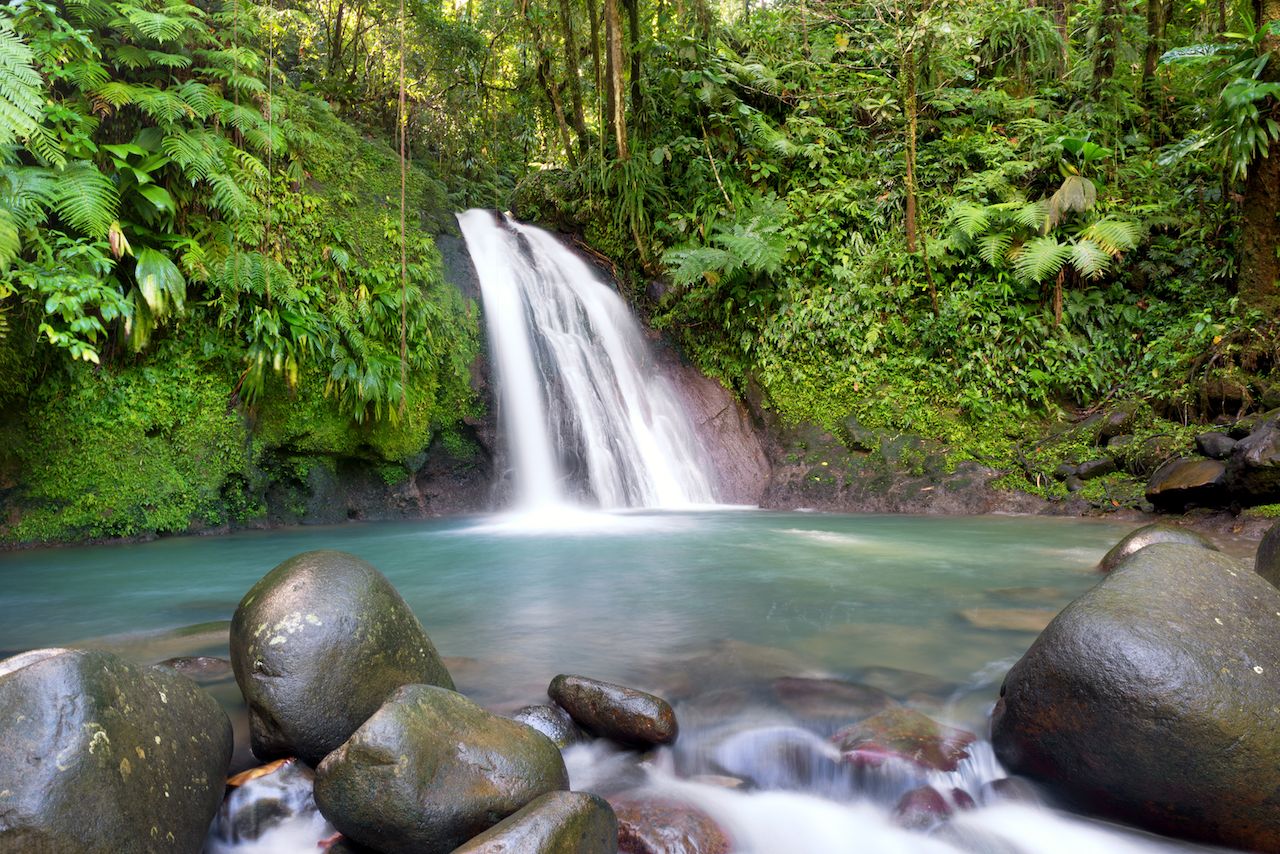 Driving the main highway through Guadeloupe National Park, we wound past two tall waterfalls dropping right next to the side of the road. As is customary in the Caribbean, a dreadlocked man was taking his daily shower under it, which seemed to me like the picture of beautiful island life. Our guide pulled the van over.

We jumped a stream by the side of the road and tucked into a small opening that led into a tropical clearing where the sun peeked through banana plants and elephant ears. Ten minutes up the path we heard another waterfall and peeked behind a tree to find a group of Germans sitting at the base of the fall in a natural pool.

“You want some fruit?” One asked, seemingly unphased by our group’s interruption of their afternoon soak. “I think this is mango.”

This was but one of countless “baths” on Basse Terre, a volcanic island of lush tropical valleys, waterfalls, and even an active volcano at Soufriere. On a given weekend you’ll find locals frolicking in the rivers that run from the waterfalls, then barbecuing fish and goat for an afternoon meal. The locals are welcoming to anyone who comes by though tourists don’t often make it this far.

“All the tourists, they go to the beaches,” my guide said as we joined another swimming hole near the national park’s visitor’s center. “The locals? We all come here.”

5. The art culture is beyond classy. 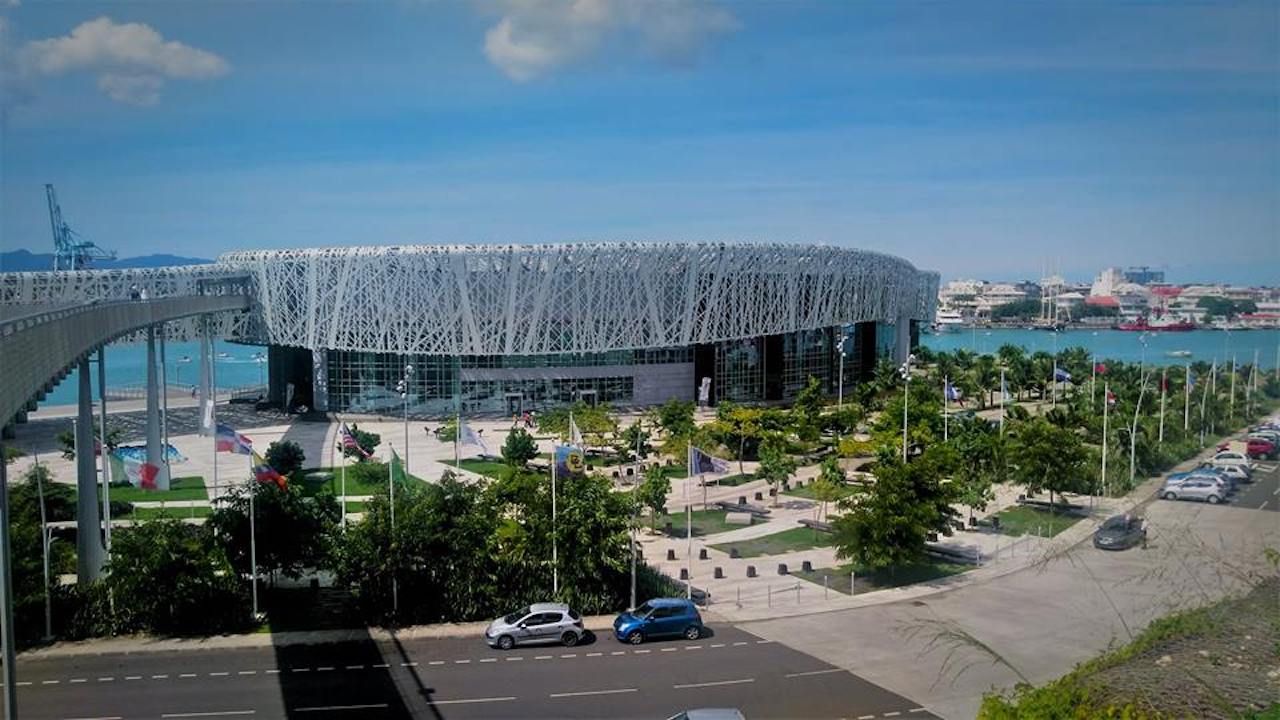 In America, you’d be hard-pressed to get more than a dozen people under the age of 50 to attend a chamber music concert. In Guadeloupe, classical music is part of the culture in the way reggae is in Jamaica. This is in large part due to Saint George, the 18th-century composer often called “The Black Mozart” and was once described to John Adams as “the most accomplished man in Europe.”

In March, the island holds a weeklong festival honoring his music, where islanders pack theaters, churches, and makeshift seaside amphitheaters to listen to his operas and concertos. Nary a seat was available at the opening night concert in Basse Terre’s historic church, and even a small concert in the seaside town of Bailiff had those wandering by standing to observe, as no chairs were left.

At the same time, the islands hold the Nouveaux Regards Film Festival where independent films from the US and Europe show in the theater at Pont-a-Pitre’s sleek Memorial ACTe center. You’ll also find touches of renaissance architecture throughout the city, giving it an overwhelming aura of culture and class that one doesn’t always find in this region. 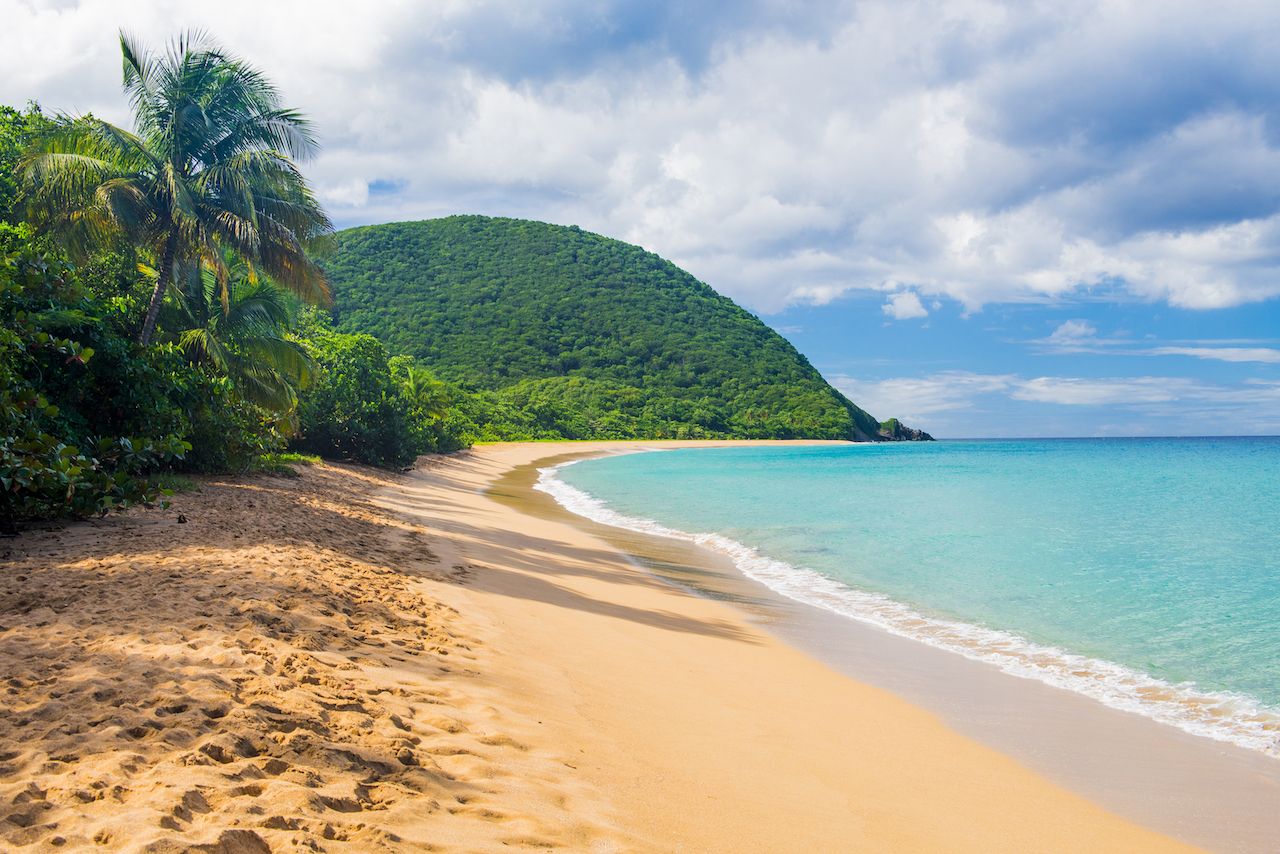 Before Guadeloupe, I visited Curacao, where I took a picture from Kenepa Grandi Beach and posted it on Instagram.

“Duuuude, I have that same pic!” one friend commented.

“My favorite beach in the world!” commented another.

I felt like the last guy to send around a funny meme.

This does not happen in Guadeloupe, where every beach you happen upon feels like some great secret none of your friends are hip to. Even along the golden shores of Grande Anse beach, where tanned French bodies line the shore in front of swaying palms and royal blue water, you get the thrill of seeing something you haven’t 100 times before. Posting a picture of a canal leading from a saltwater lake to the ocean along this beach, at least three people asked me “Where is THAT?”

Not that we should live our lives for social media reactions, but Guadeloupe gives you the opportunity to be a bit of a trailblazer. It’s a chance to go home and tell your friends about the deserted white-sand beach you spent a day on in Marie Galante. Or the waterfall you swam under in Basse Terre. Or the steak au poivre you enjoyed for two hours seaside in Deshais, where the BBC’s Death in Paradise is filmed. Every story you have in Guadeloupe will be a new story to everyone, making your vacation tales ones people actually want to listen to.

7. It’s perfectly imperfect, and if you embrace that, you’ll never want to leave. 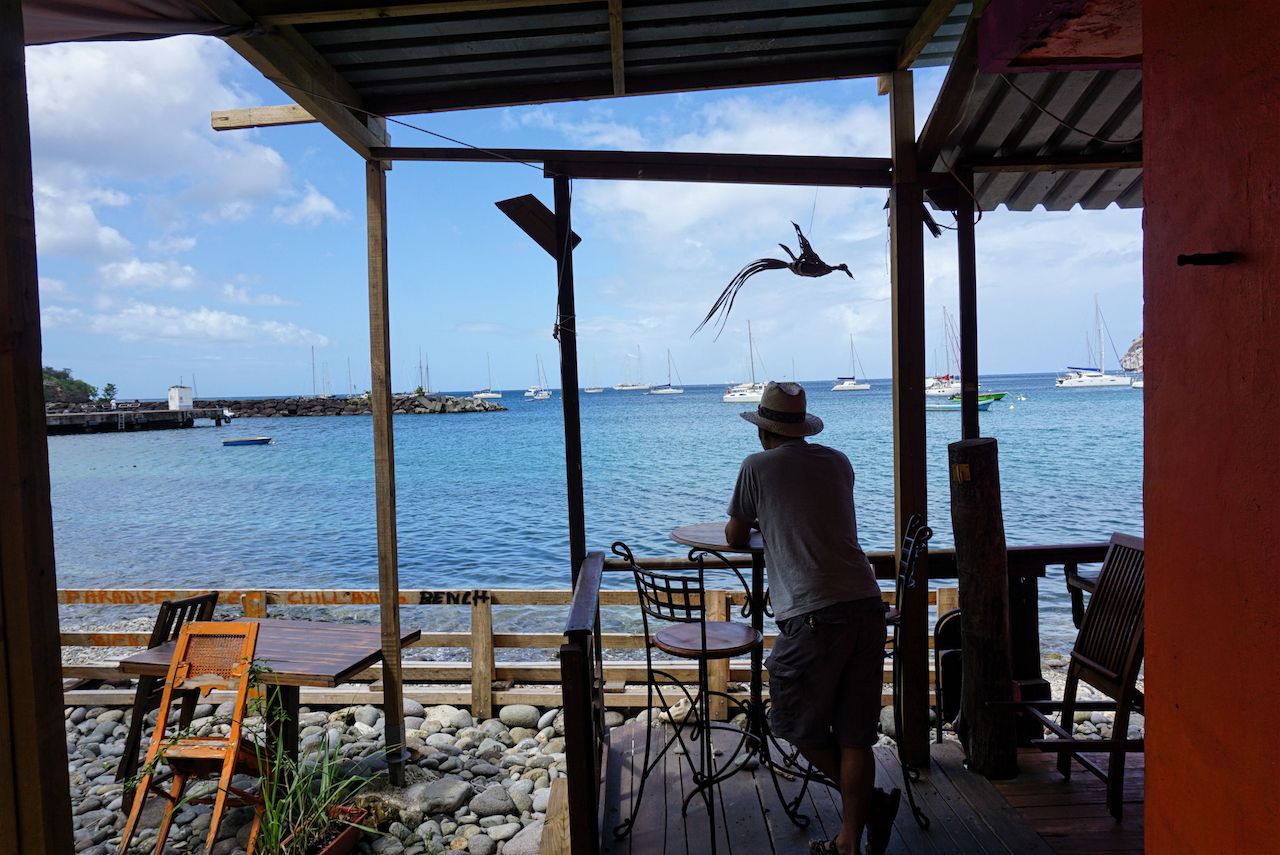 In the fancy French Caribbean, Guadeloupe is still the rough, rugged little brother. It’s the Oakland to bougie Martinique’s San Francisco and celeb-soaked St. Barth’s Napa Valley. That’s not to say it’s rundown or dingy, but it’s not filled with luxury resorts, inaccessible fine-dining restaurants, and private-jet-loads of the super-rich. It has stunning beaches and lush jungles, but it also has traffic and smells like car exhaust in the cities. You’ll see litter on the roads and run-down apartment buildings by the sparkling blue water.

Service is generally terrible everywhere, meticulously combining island languor with a French haughtiness. A curt, “We don’t have that,” seems to be waiters’ preferred response to anything you order.

But this is what gives Guadeloupe its charm.

As the seventh-largest Caribbean territory by population, it’s very much a place that feels real, but safe at the same time. You’ll never get the impression the island was set up for tourists, and your experience is more one of dropping in on another culture than being pampered on a tropical island. It’s not perfect, and that’s why it’s so beautiful. If you’re not expecting a seamless, mass-produced vacation, you’ll want to stay weeks longer than you’d planned.

CultureHow Curacao’s People Fight To Keep Their Island the Most Colorful Island in the Caribbean
Tagged
Beaches and Islands Travel Insider Guides Guadeloupe
What did you think of this story?
Meh
Good
Awesome

What NOT To Do in Guadeloupe

What's Going on in... Guadeloupe?