Kombucha has achieved near-universal renown when it comes to fermented probiotic drinks. Even if you’ve never thought about gut health, you’ve likely tried kombucha or at least heard the claims that this tonic is transformative.

Yet there’s another fermented and probiotic-packed beverage that’s been used for thousands of years by nomadic cultures that hasn’t reached the same level of acceptance: kefir. And its origins are the stuff of legend.

The story of this milk-based beverage begins in the Caucasus Mountains, where the nomadic Ossetians first experimented with kefir grains. Kefir grains aren’t like rice, wheat, or barley, but rather are a gelatinous polysaccharides culture of bacteria and yeast called kefiran. These “grains” are at the heart of all kefir. The Ossetians added kefir grains to goat skin bags and let the grains ferment into a diluted, milk-like drink that’s similar to yogurt but not as thick.

It’s difficult to nail down how the Ossetians came upon kefir grains, but according to legend, Mohammed gifted people of the Caucasus Mountains with the original cultures from which kefir was born. Kefiran became known as “Grains of the Prophet.” Families passed different strains down from generation to generation and became fierce guardians of their methods for producing kefir.

While specific recipes were kept secret, general custom dictated the grains were combined with cow or goat milk. The mixture was then poured into an animal hide bag and left in the sun to ferment. Any guests or family members coming and going from the house were expected to mix the kefir by giving bag a gentle kick as they passed.

The peoples of the Caucasus region were protective of their kefir; they were reluctant to share kefir grains or recipes with outsiders lest the beverage lose its supposed magical, gut-fortifying properties. For nearly 2,000 years, kefir remained a well guarded culinary treasure. All the outside world knew of kefir is that Marco Polo may have tried a similar beverage. In his book The Travels of Marco Polo the Venetian, he mentions a “mares milk” drink made by Tartar women — an ethnic group that now resides in Russia, Ukraine, and Uzbekistan — with the “qualities and flavour of white wine.” He called the beverage kemurs.

A kidnapping leads to an outside interest in kefir 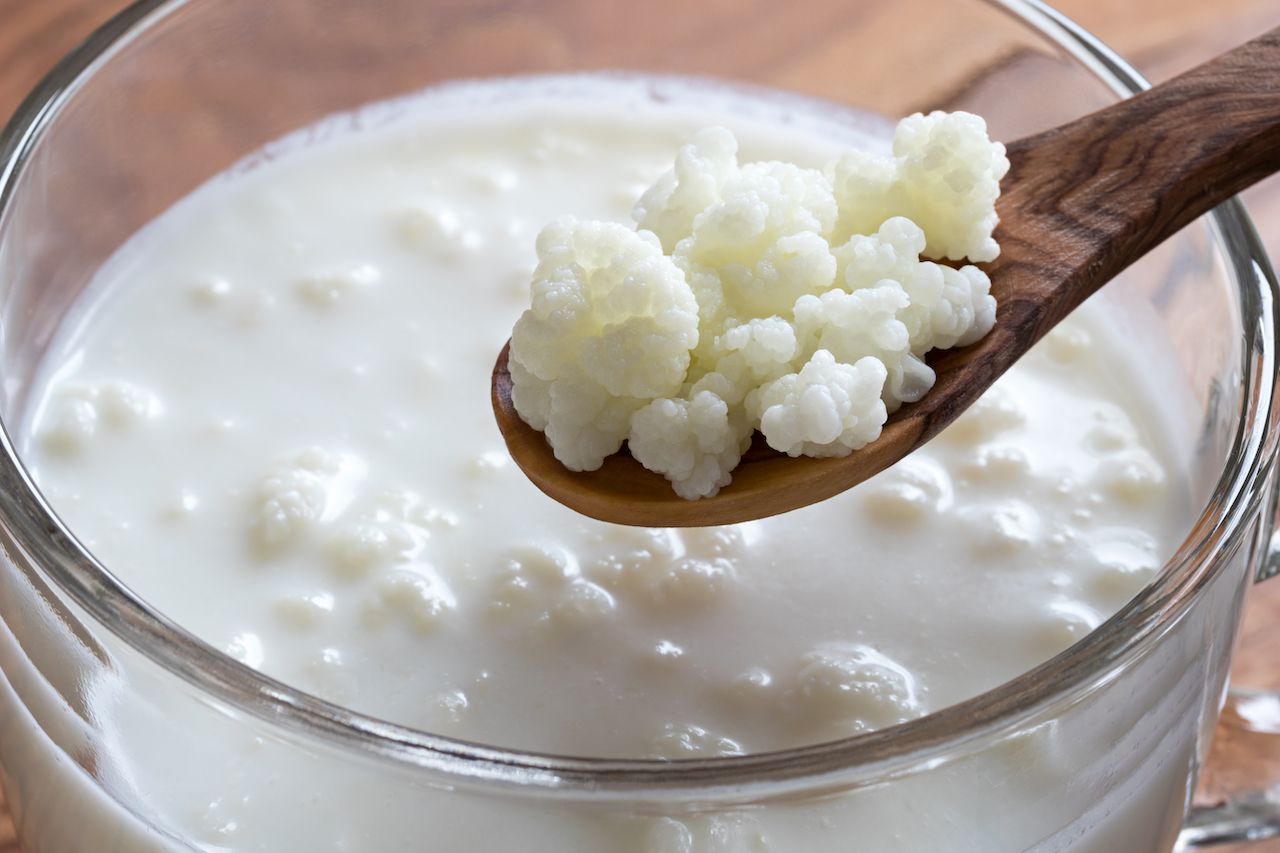 Around the 19th century, however, news began to spread that kefir’s supposed magical properties are real-life health benefits. The probiotic bacteria in kefir can help heal a variety of digestive ailments. It’s also packed with calcium, and each serving contains around nine grams of protein.

“Probiotics introduced to the gut have been found to support immunity, digestion, and skin health. Kefir cultures fermented in dairy provide a better chance for the probiotics to survive the digestion process, so many opt for kefir over yogurt,” explains Julie Smolyansky, author of The Kefir Cookbook and CEO of dairy company Lifeway Foods. She and her parents escaped the former Soviet Union and resettled as refugees in Chicago when she was a year old. “It’s an inflammation fighting superfood that everyone should have in their fridge.”

Russian doctors at the time wanted to study the benefits of kefir further, but their attempts proved futile. One in particular, Dr. Elie Metchnikoff, theorized that that the lactic acid bacteria in kefir might be responsible for the long life spans of Bulgarians. He praised the beneficial bacteria swimming in fermented milk and recommended that his patients suffering from digestive ailments drink it. Metchnikoff’s research caught the eye of the All Russian Physicians’ Society. The group ruled that all Russians should benefit from kefir, but the people of the Caucasus Mountains held their kefir grains close and wouldn’t give them up so easily.

Here is where the history of kefir turns into some kind of twisted — but true — fairytale. According to a history of kefir written by Elinoar Shavit, the society commissioned two brothers by the name of Blandov, who owned a cheese-making factory in the Russian town of Kislovodsk, to track down some grain for them. The tribes people living near their factories refused to sell any grains to the Blandovs, so they came up with a scheme: They recruited one of their employees, Irina Sakharov, to go to the court of a tribal prince named Bek-Mirza Barchorov, figuring her beauty would conjol the prince into giving up some of his kefir grain.

The prince did indeed fall for Sakharov, but he held tightly to the grain, refusing to give her even a drop. She gave up and started to return home, but on her way Prince Bek-Mirza Barchorov kidnapped Sakharov and demanded she marry him. The Blandov brothers helped her escape and transported her to the Russian court of Czar Nicholas II, where she could lodge a complaint against the prince. As compensation for his abuse of Sakharov, the Czar ordered that the prince pay her in 10 pounds of kefir grains.

In 1908, The Blandovs sold the first commercially produced kefir in Russia using the grains procured by Sakharov. By 1930, kefir was being widely produced all over Russia. The secret of kefir was out.

To date, kefir is still one of the most popular fermented beverages in Russia. The government showed their appreciation to Sakharov in 1973, when she received a letter from the Minister of the Food Industry, thanking her for her “heroic” efforts.

How to make kefir at home 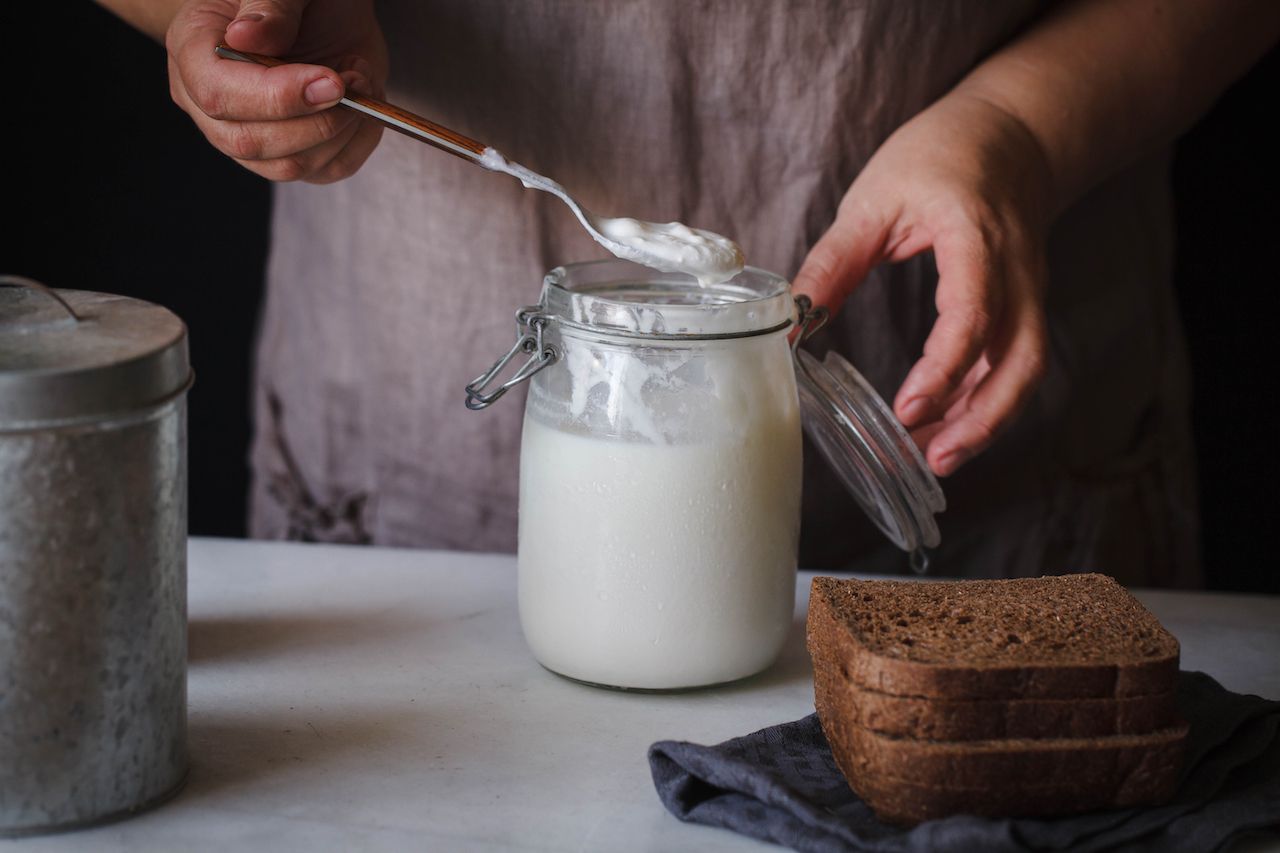 “The DIY scene is alive and well. [Lifeway] even make a Kefir Starter kit for those who want to experiment at home,” Smolyansky says. “Lots of people love to create little home fermentation labs to make kefir, kimchi, and other probiotic foods. That’s how Lifeway started, too – in my parents’ basement. The kefir [grains] in Lifeway bottles today began with the kefir cultures my parents procured over 30 years ago.”

Just like the Russians figured out in the early 1900s, you too will need to get your hands on kefir grains (they are easily purchased online these days, no need to kidnap anyone) if you want to make your own kefir. Remember, these cultures aren’t actually grains — more like gelatinous beads that grow together in a small clump, like cauliflower. Then you’ll add a spoonful of the grains to a glass jar filled with about a cup of milk. Cover the jar with something light, like a piece of cheesecloth (it shouldn’t be airtight) and let it sit out at room temperature for 24 hours.

During this time, the milk will ferment. When the process is finished, the kefir will have a thick consistency, similar to buttermilk. Before it’s ready to consume, however, you’ll have to strain out the kefir grains using a sieve. Keep them, because the grains are reusable. As long as you keep making new batches of kefir, the grains will naturally multiply.

While you can drink kefir straight for an unfiltered probiotic boost to your gut, it can be used in smoothies and as a replacement for yogurt, buttermilk, or milk in any recipe, especially those for baked goods, according to The Kitchn.

What was once considered a mysterious elixir can now be whipped up easily in the modern kitchen. It’s that simple.

Food + DrinkThis Meat, Mayonnaise, and Egg Salad Is Russia’s Most Essential Party Dish
Tagged
Food + Drink
What did you think of this story?
Meh
Good
Awesome