Sungchul Shim and I have been sitting at the marble countertops at the restaurant Kochi, where he is the executive chef, in midtown Manhattan, chatting about Korean food for about a half hour before he disappears into the kitchen to retrieve a couple of Tupperware containers. All around me, the staff is preparing for service — cleaning dishes and utensils, arranging place settings, prepping ingredients, and reviewing the evening’s reservation list. It’s quiet, but busy work.

Shim emerges from the kitchen and places two containers in front of me, removing the red lids. Each one contains mounds of thick, pungent paste — one dark brown and the other brick red. Shim offers me a spoon and I dip into each container. First the red sauce, gochujang, a fermented chili paste that’s a punch of rich spice followed by honeyed sweetness. Then the brown sauce, doenjang, a fermented soybean paste that’s earthy, full-bodied, pungent almost to the point of sourness, and gently salty. There is so much power and flavor in that little spoonful that the only reaction I can muster is a dumbfounded, “Wow.”

Shim explains that at Kochi, gochujang, doenjang as well as ganjang, or soy sauce, serve as a basis for nearly every dish on the menu — asparagus topped with a ricotta infused doenjang or scallops paired with spicy gochujang on the side, for instance. These three sauces are fundamental to Korean cuisine. Shim worked in a Japanese restaurant for many years, and characterizes much of the food he cooked as “mild.” With these sauces at the helm, the opposite is true of Korean food.

“Korean cuisine is strong,” he tells me. “And there is a lot of spiciness. Korean people love spicy food. The flavors are more pungent and stand out more.”

Ganjang, gochujang, and doenjang make up what Hooni Kim, chef at New York City restaurants Hanjan and Danji, calls in his forthcoming cookbook, My Korea, the “holy trinity” of Korean cuisine. They take on an almost religious significance in Korean society, both enhancing Korean food and holding a revered place in the daily lives of many Korean families.

Kim grew up visiting his grandmother on a small island in Korea called So An Do, where the residents “cooked food the way Koreans did 100 years ago,” he says. Each family cultivated their own farm and came together once a year to prepare huge batches of kimchi and their own jang sauces. The distinct scent of fermentation-in-progress permeating the island, especially in the summer, haunts him to this day. 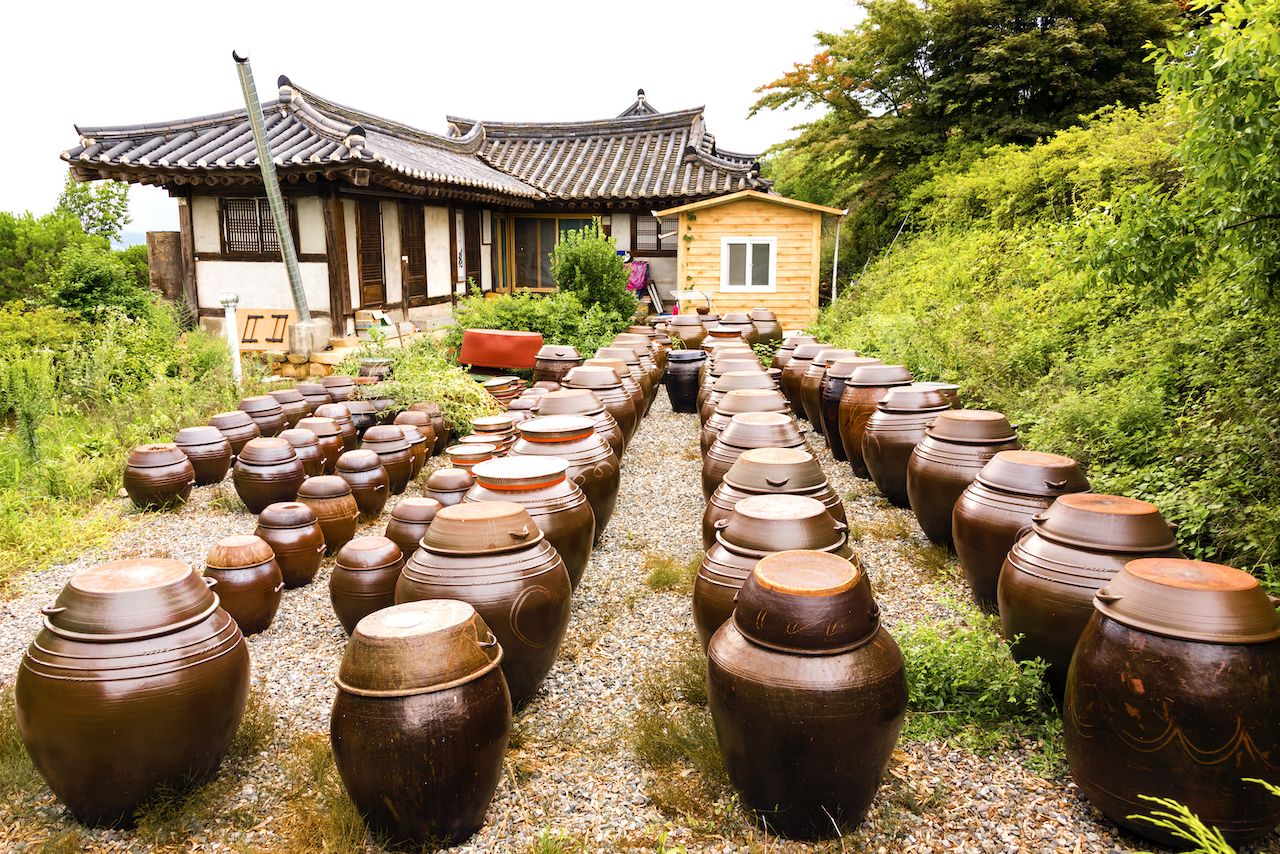 Though these practices are becoming less common (especially as condiments like soy sauce are available at nearly every grocery store) all three sauces are still staples in the typical Korean family’s pantry. Suyoung Park, a chef at the two-Michelin-starred restaurant Jungsik, doesn’t have much experience making her own jangs, but she too has known their flavors since childhood.

“Growing up, my mother used to make me a grilled pork dish that was flavored with gochujang and it was my favorite dish throughout my childhood,” she says. “Whenever I see this kind of pork dish it makes me think of my mom.”

How to use jang sauces 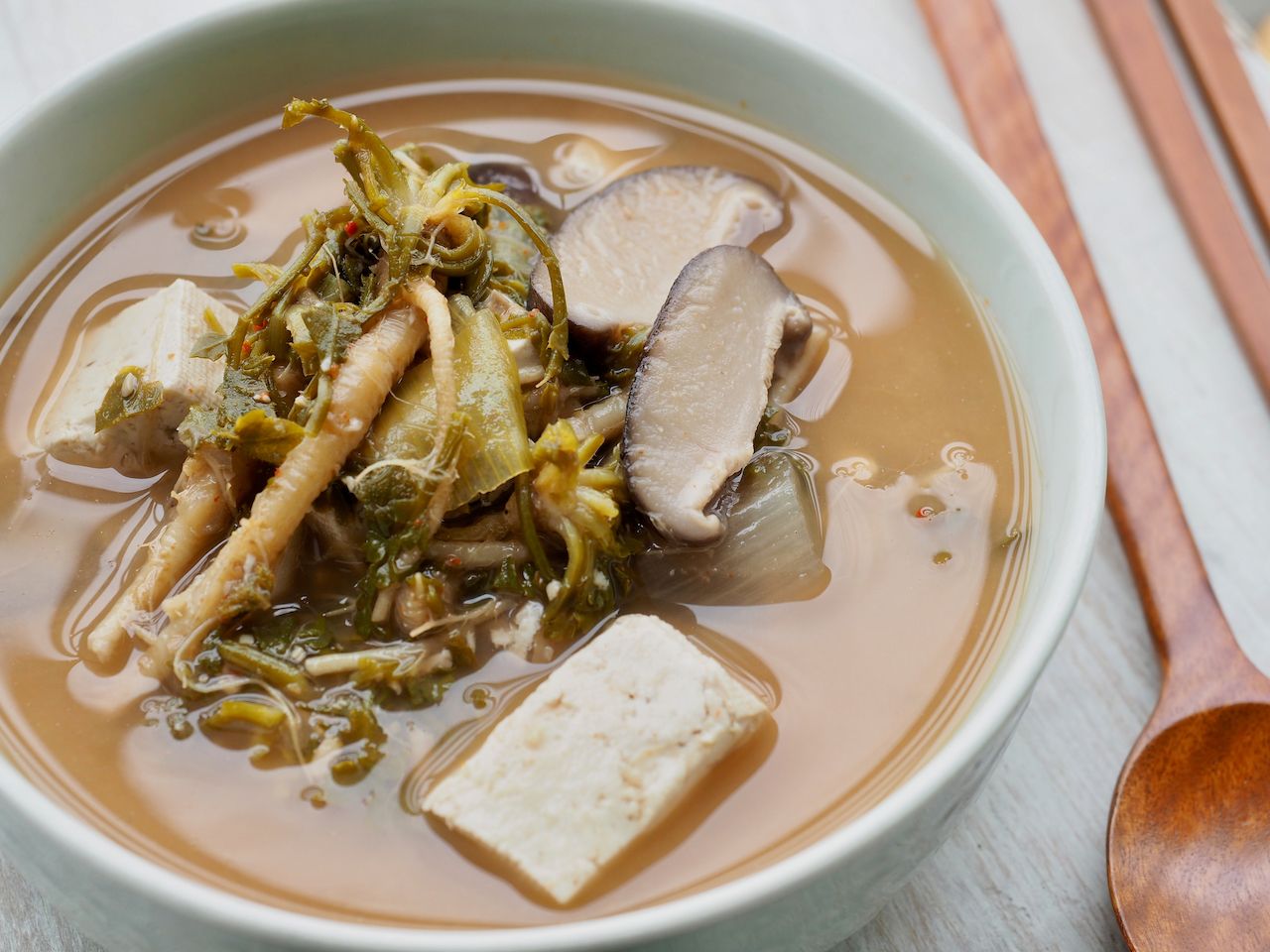 Each jang sauce has its own personality, adding elements like salt, heat, sweetness, depth, and balance to almost every Korean dish. On the surface, those flavors sound deceptively simple. Yet they form the foundation on which chefs build complex dishes, from stews to barbecue meat.

Gochujang, Park explains, adds sweet, spicy, and earthy flavors. Doenjang adds salty, earthy, and umami flavors, while ganjang is salty and umami. The latter is primarily used as a seasoning, Park says, but can also be used as a condiment and for pickling and marinades. Gochujang is often made into a sauce or braise, and doenjang is used for soups, condiments, and banchan, which are small side dishes.

According to Park, popular dishes that jangs appear in include doenjang guk, a simple, everyday stew made with vegetables and tofu; dukbokki, a Korean street food flavored with a gochujang-based sauce; and gejang, crabs fermented in soy sauce and eaten with rice.

Fermentation is key to Korean food 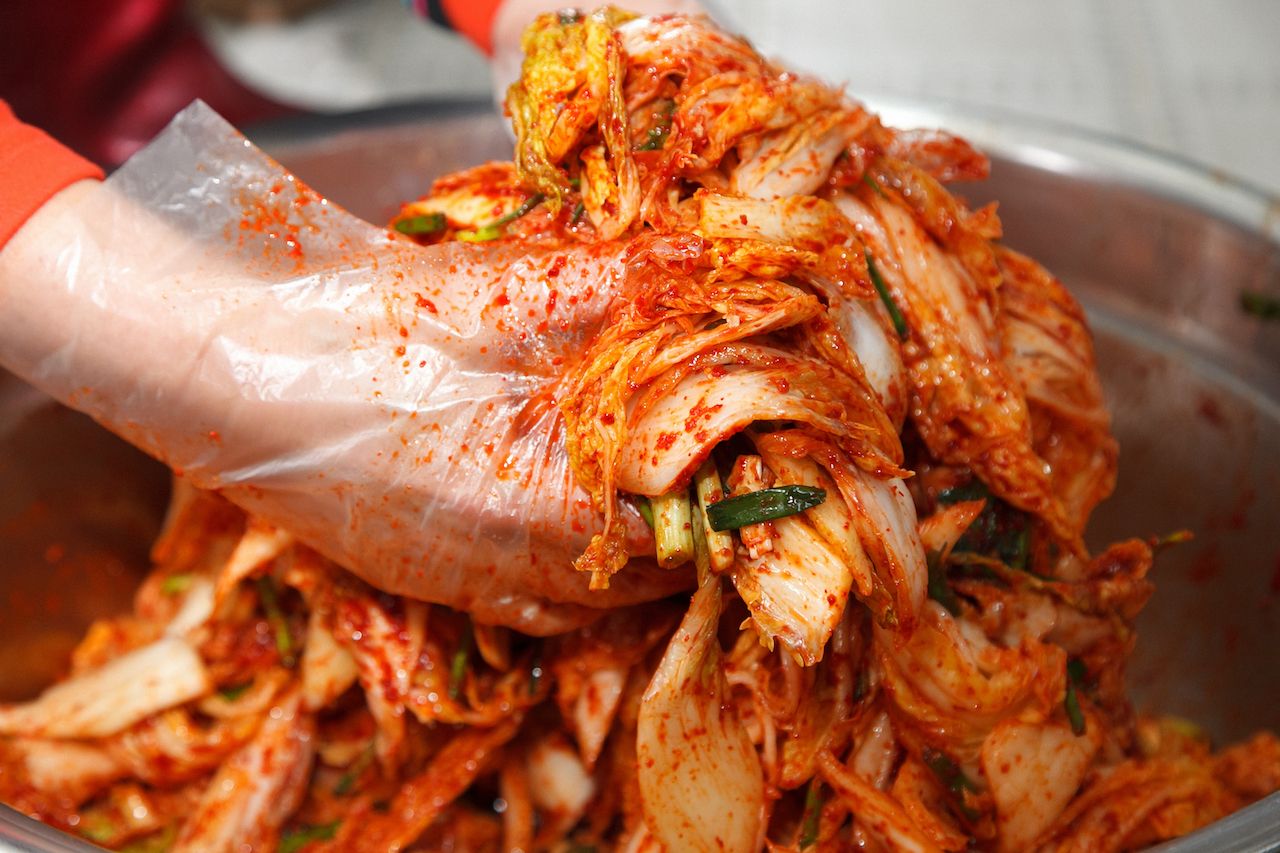 The magic of the jangs comes from fermentation, arguably the most important cooking technique in Korea. The fermentation happening in the jang sauces, as well as kimchi, is called acetic acid fermentation, which converts starches or sugars in grains, fruit, and vegetables into condiments with that distinctive sour flavor. In Korea, fermentation started out as a way to make vegetables last longer and easier to digest.

“Fermentation is essential to Korean cuisine,” Park says. Before refrigeration, there weren’t many crops that grew in the mountainous terrain other than alliums (the plant family that includes onions and garlic) and simple vegetables, she says, adding that “because of this, Koreans had to ferment many of their vegetables and proteins, so that they could last a long time.”

There’s a health benefit, too.

“Koreans are also very health conscious,” Park says, “so fermentation is good because it helps the body break down the food further, and also provides natural probiotics into the Korean diet.”

Practical use isn’t the only reason fermentation traditions have survived thousands of years. It has also remained a part of the culture because it creates intense flavor and texture changes — in both the ingredient being fermented and the dish it’s added to. And because jangs are traditionally fermented in the open air, yeast strains native to certain regions add their own flavors to the jangs, making each batch distinct. This pungent tang of fermentation has become a hallmark of Korean cooking. In fact, Kim doesn’t hesitate when I ask him to describe the signature flavor of Korean food.

“It’s the funk of fermentation. There’s no better word than funk. It’s a beautiful word when you apply to cheese, and I feel the same way when you apply to the jang sauces,” says Kim. “You just add a little [ganjang] to your stew at the end like a finishing fleur de sel or an expensive olive oil.”

If you’re not accustomed to it, the funk of a naturally fermented soy sauce, for instance, might be off putting. However, once it’s added to food, that funk blooms into a conduit that enhances all the other ingredients surrounding it.

“When I apply [soy sauce] to food that funk becomes this powerful, dynamic source of depth. Just like a French chef would use salt to season, Koreans like soy sauce to season. The difference is, besides five years of fermentation, it has this ability to carry whatever the flavors are that it’s combined with a lot longer, and gives it more oomph.”

Eighteen years after Kim stopped visiting his grandmother in Korea, he finally became a professional chef. Only then did he really come to appreciate that signature funk — the smell, texture, and taste that makes Korean food distinct.

Seoul is getting the coolest rooftop garden in the world