I’m in a Korean barbecue restaurant, and it’s boisterous. My companions and I are in the basement, pouring each other shot glasses full of soju while the strips of thin-cut meat sizzle on the nearby grill. I can feel myself getting tipsy, smoke from cooking short ribs making my eyes water. Eating Korean barbecue is an adventure, a party, a night you might regret in the morning all in one.

Eventually, when the astringent flavor of soju becomes overpowering, off-white cans with the label reading “Makku rice beer” appear on the table. I crack one and pour it into a glass. The milky white texture grabs me first. It looks similar to unfiltered sake, clouded by sediment. The tangy, almost sour flavor is familiar to soju or sake, but it’s more refreshing and crisp. The Champagne-like fizziness adds buoyant charm. I can’t stop drinking it. This is makgeolli, Korean rice wine — and the brand I was sipping, Makku, is the first craft makgeolli to be produced in the United States.

Here’s everything you didn’t know you needed to know about makgeolli, Korea’s oldest, and most underappreciated, alcoholic beverage.

How makgeolli is made 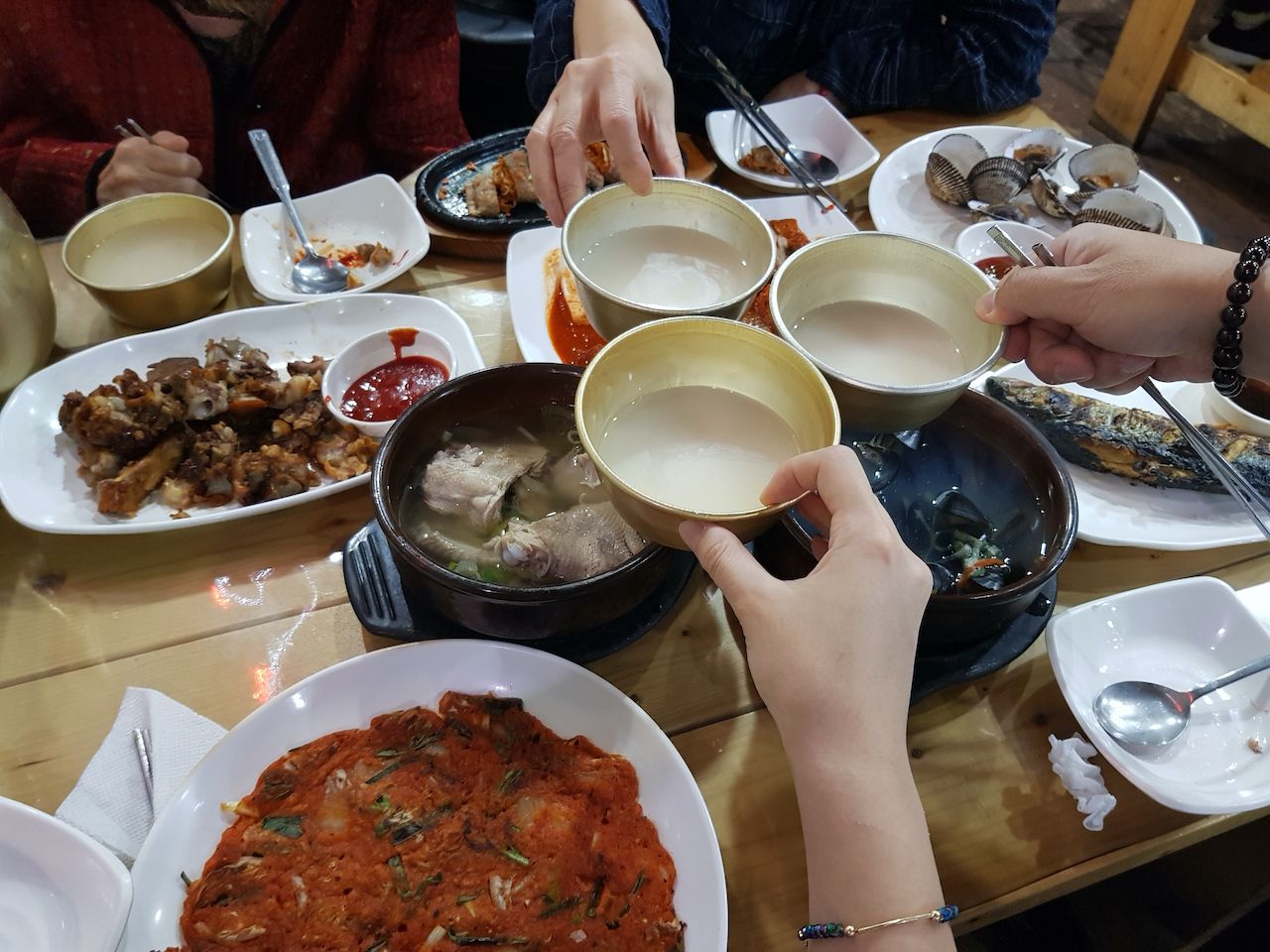 Many Americans are already familiar with soju, a Korean liquor distilled from rice. Makgeolli is closer to Japanese sake. Though both are technically referred to as rice wine, both makgeolli and sake are brewed using rice in a process more akin to beer.

Makgeolli beings with nuruk, a wheat cake that catalyzes fermentation. The nuruk is then combined with steamed rice and water and is allowed to brew for as many as 10 days. For contrast, the sake brewing process involves washing and steaming rice, mixing it with yeast and koji, a type of mold, and allowing it to ferment.

“Sake is very similar to makgeolli in terms of the brewing process and ingredients — but the main difference is the culture that we use,” Carol Pak, the founder of Makku, explains. “Sake uses koji, so you get the unique organisms in the air and the land of Japan. Nuruk is more earthy and complex.”

Traditionally, makgeolli is brewed in a large ceramic jar known as a hangori or onggi, the same type of jar in which soybean paste and kimchi are sometimes also preserved. Fruit and herbal infusions can be added to the mixture during fermentation to give the makgeolli an additional flavor.

One standout characteristic of makgeolli is that it’s left unfiltered. Similar to nigori, unfiltered sake, the sediment from the fermentation process is left in the bottle, giving the beverage its signature cloudy, milky appearance. Pak explains that during the fermentation process, makgeolli splits into what are essentially two different beverages: A clear rice wine called cheongju and the thicker, hazier sediment at the bottom, called takju, traditionally consumed only by peasants. In fact, another name for makgeolli is nong-ju, meaning farmer’s liquor. Mix the two together, and you get makgeolli.

There’s another crucial difference between sake and makgeolli: Once the brewing process is complete, makgeolli is diluted with water, bringing the alcohol content from around 18 percent to seven percent alcohol by volume.

The history of makgeolli from antiquity to today 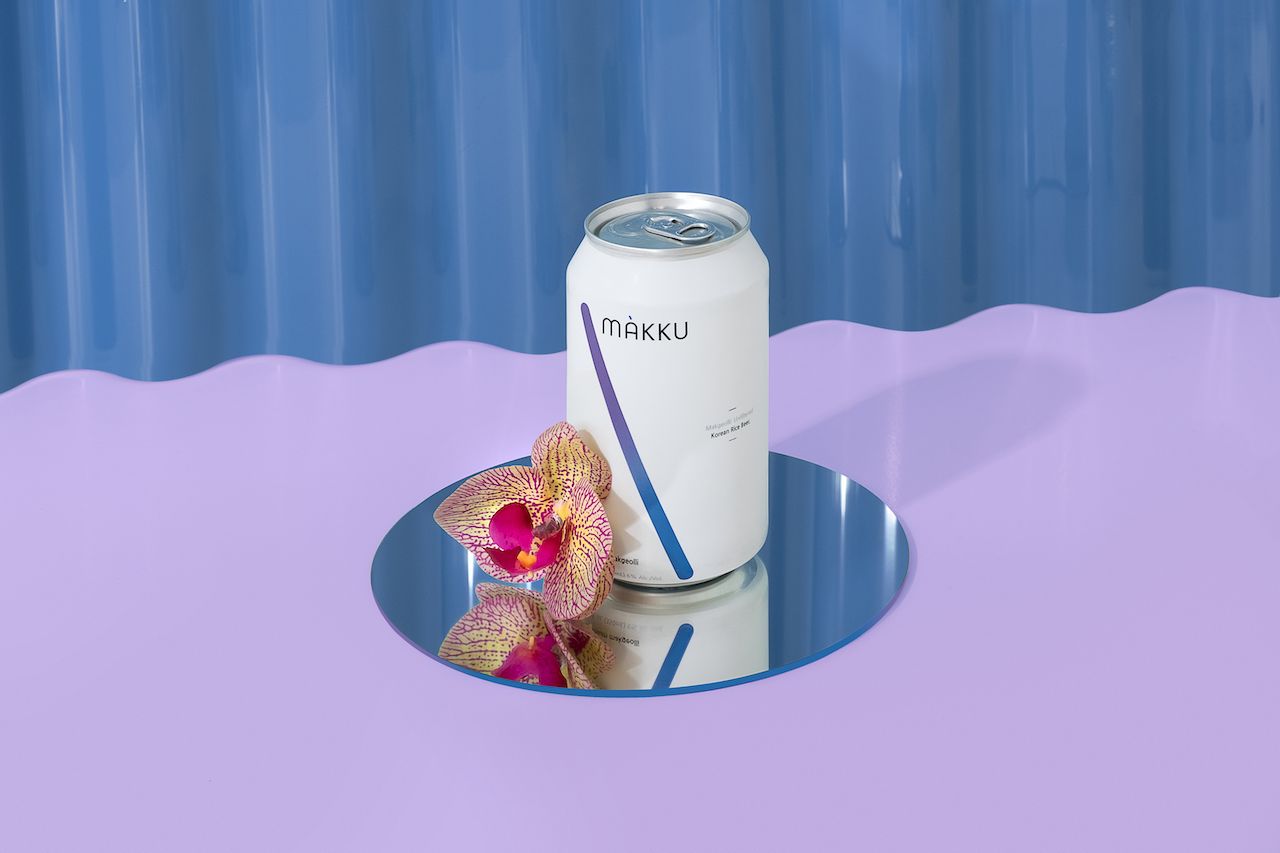 Makgeolli is considered Korea’s oldest alcoholic beverage and was invented right around the founding of the Korean empire. One of the first mentions of rice wine appears in a book called Poetic Records of Emperors and Kings, written around 37 BCE to 19 BCE during the reign of King Dongmyeong. According to historian Lee Hyo-gee, during the Koryo Dynasty (918-1392) makgeolli was called ihwaju, meaning “pear blossom liquor” because it was made “from rice that had fermented during the pear blossom season.”

Fast forward to the mid-1960s and makgeolli, despite its vaunted place in Korean history, had fallen out of favor. During the Korean War, the government banned distilling spirits with rice due to shortages of the grain.

“The traditional recipe got lost because people started using substitutes for rice. Also, makgeolli never lost that stigma of the ‘poor people drink,’” Pak says. “Because Korean society has been growing so fast, they’re moving away from makgeolli to soju and beer and spirits from other countries.”

Pak knew she would have to revamp makgeolli’s image if this ancient spirit had any chance of surviving the modern era. So she traveled all over Korea, trying as much locally produced makgeolli as she could, trying to find just the right flavor for her own version.

“I wanted to go with something approachable,” she says. “[Makku] is more smooth and refreshing, slightly sweet in mouthfeel and taste, with a medium body.”

Pak also decided that she would change Makku’s designation from a rice wine to a rice beer (according to the Alcohol and Tobacco Tax and Trade Bureau, a beer is considered any fermented carb, with or without malt or hops), positioning makgeolli as a more sessionable, casual drink that’s appropriate for any meal or occasion at any time of day. She hopes that consumers will think of makgeolli as the new cider — a foreign drink (cider originated in England) experiencing a renaissance in America.

Pak paired Makku’s lighter taste with a sleek design and two new fruit infusions, blueberry and mango, which she developed with the help of her mother, a trained herbologist. Her grand experiment in bringing this ancient Korean beverage to America has finally come to fruition. Now all that’s left to do is wait to see if it will catch on. But with bars and liquor stores saturated with hard seltzers and craft IPAs, it’s high time that a new face — someone like Pak, who is interested in adapting traditions for the modern world — brings an entirely different drink to the table.