In the 13th century, Mongol invaders arrived in what is now Andong, South Korea, (at the time the kingdom was known as Goryeo) with more than their horses and a conquering spirit. They also carried with them knowledge of distilling and a recipe for the anise-flavored spirit arak, picked from the Persians. Mongolian distilleries opened in the city of Kaesong (where soju is still known as arak-ju) to produce a version of the clear liquor. Thus began a centuries-long love affair with soju, the most popular spirit in Korea and one of the top-selling alcoholic beverages on the planet.

In Korea, soju has become synonymous with celebration. It’s a spirit best enjoyed in a boisterous environment, shared among a big group of your rowdiest friends. If there is a decadent, five-course meal on the table, all the better. That’s probably why soju is just about as central to the meal at Korean barbecue restaurants as the meat itself. Jinro soju, served in an iconic green bottle, regularly tops lists of the world’s bestselling alcohol brands.

In the United States, soju still struggles to gain the recognition it deserves, and indeed, most Americans have probably only encountered it at said Korean barbecue restaurants. Yobo soju, distilled in the Finger Lakes, is just one of two soju brands produced here in the US. Carolyn Kim, a Korean-American lawyer working for a nonprofit, founded Yobo with absolutely no background in distilling or spirits. She simply loved to drink and eat.

What began as a “fun project,” as Kim modestly refers to her business, has evolved into one of the most respected high-quality soju brands available anywhere. Unlike the rice, wheat, or sweet potato used to make traditional soju, Yobo is made with local grapes. She’s found one of the biggest ways people stateside are using soju is in lower-alcohol cocktails.

“Not everyone knows or understands soju yet,” she tells me, “so there’s a hesitancy. America isn’t ready for a big soju yet. The time will come.”

And when it does, this is what you need to know about drinking it.

What is soju and how does it taste? 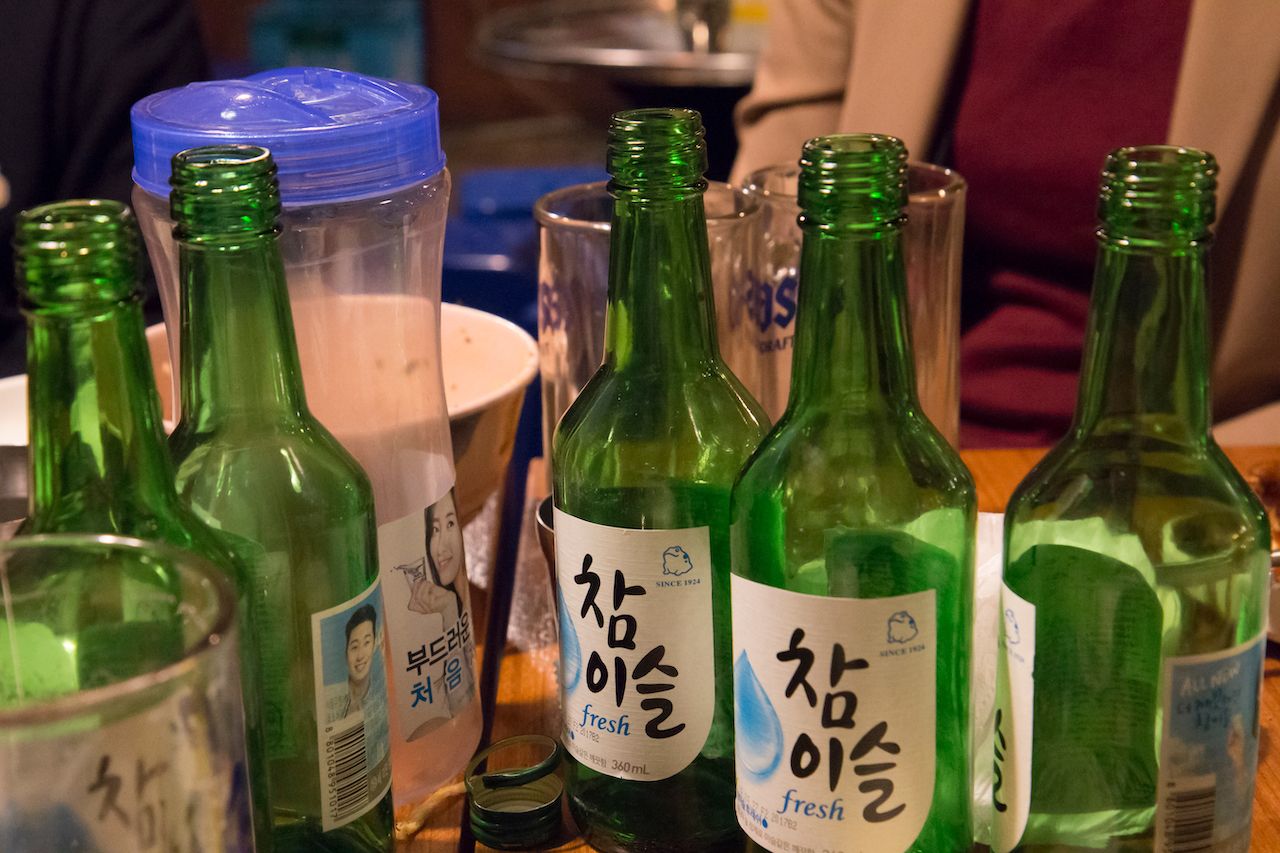 Soju is a clear spirit that was originally distilled primarily from rice. During the Korean War, the government banned distilling rice, but soju didn’t disappear. Instead, distillers produced soju with grains like wheat and barley, as well as starches like potato and tapioca. When the ban ended in 1999, these grains remained popular in the production of soju.

Soju is sometimes compared to vodka, but it has a lower alcohol content (usually hovering in the 20 to 24 percent ABV range). This makes it far more drinkable over an extended period of time, such as a dinner party. However, mass-produced soju can be harsh, slightly bitter, and have an almost tangy aftertaste. Often, a sweetener is added in an attempt to cover up that rubbing alcohol quality.

“[High-quality soju] is neutral, easy to drink, and smooth,” adds Kim. “It has a light, soft, clean quality.”

The soju brands that are available in the US are limited, but there are a few brands you can expect to find at liquor stores.

Jinro Chamisul: One of the most popular sojus that’s recognizable by its distinctive green bottle. It’s a no-frills, inexpensive soju with a low alcohol content (about 20 percent ABV). Still, the alcohol flavor of Chamisul is especially harsh, making it better for shots than sipping.

The difference between soju, shochu, and sake 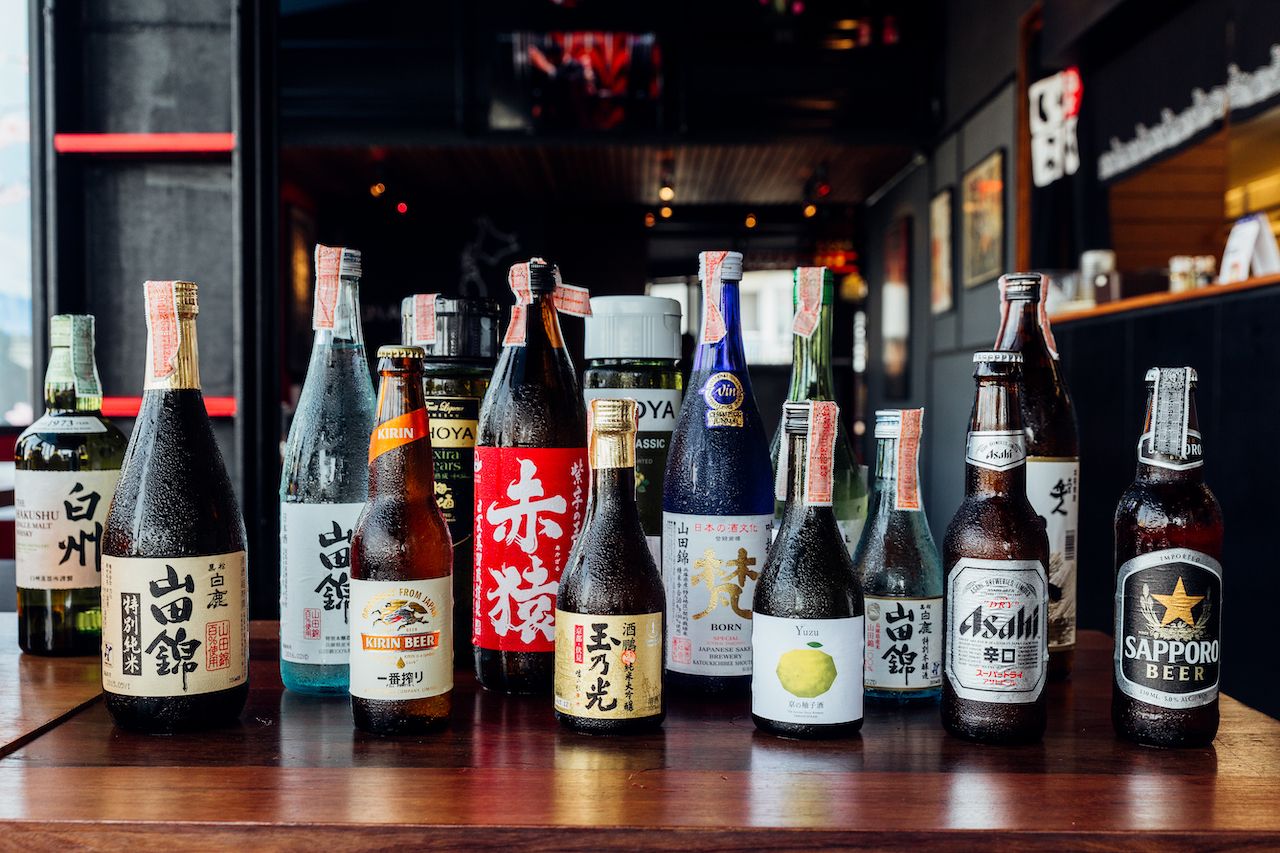 Soju should not be confused with two other types of rice-based spirits, sake and shochu. Sake is brewed, not distilled (and by the way, it should not be called a “rice wine” either; wine requires grapes or at the very least fermented fruit juice).

Shochu is similar to soju, but like sake, it originated in Japan. James, Carolyn’s husband, thinks of shochu as a “sibling, or a cousin” to soju. Both have a low ABV, but shochu is typically distilled with sweet potato, and sometimes barley or rice. Perhaps one of the most standout differences is that shochu is enjoyed on the rocks, or mixed with fruit juice or water, whereas soju is most often consumed neat, in a shot glass.

Etiquette and how to drink soju 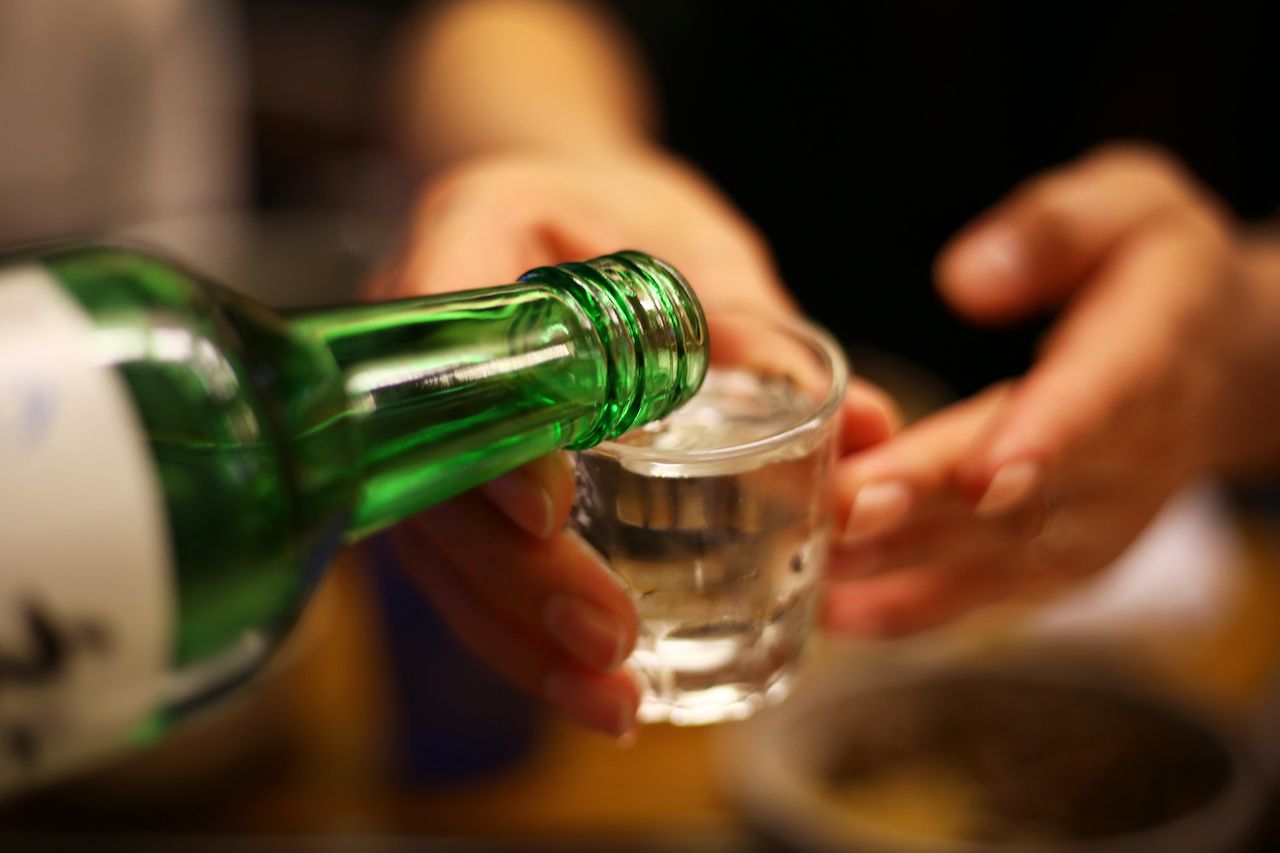 There are traditional rituals guiding the consumption of soju, and much of it goes back to the fact that people aren’t meant to drink soju alone. The very nature of soju is communal.

“People do drink it alone, but I think that there’s really a sense of sharing with friends and family,” says Kim.

Case in point: You’re not supposed to pour your own drinks. Instead, wait for a friend or seatmate to fill your glass when it’s empty. You return the favor when the time is right (whatever you do, don’t drink straight from the bottle). Both the glass that’s being refilled and the bottle being poured should be held with two hands.

If you’re drinking soju straight, which is the most common approach, it’s served in a shot glass. This is slightly misleading. It might be tempting to shoot soju, but it’s more common practice to gradually sip. Kim compares soju pours to small pours of whiskey one would savor rather drink down in one gulp.

There is one exception: The first pour of soju should be taken as a shot. If you want to adhere strictly to tradition (which might be appropriate depending on setting) turn your head away from dining companions when taking the shot as a sign of respect.

If you’ve been to a Korean restaurant, you may have noticed people shaking the soju bottle before opening it. This tradition stems from when soju bottles were corked rather than secured with a metal cap. Bits of the cork would crumble into the drink, so you’d have to shake the bottle to get the sediment to rise to the top. Once the cork popped off, you’d tap the base the bottle with your elbow, followed by a swift hit with the webbing between your middle and pointer fingers to release a small splash of liquid, supposedly to release the unwanted chunks of cork from the bottle. This ritual is totally unnecessary now, but the shaking endures.

James, however, emphasizes that “soju is just booze,” meaning that it’s probably totally fine to eschew any or all of these traditions when you’re drinking soju among friends (though if you’re at a restaurant, read the room to determine if following traditional etiquette is appropriate).

How to drink soju with food 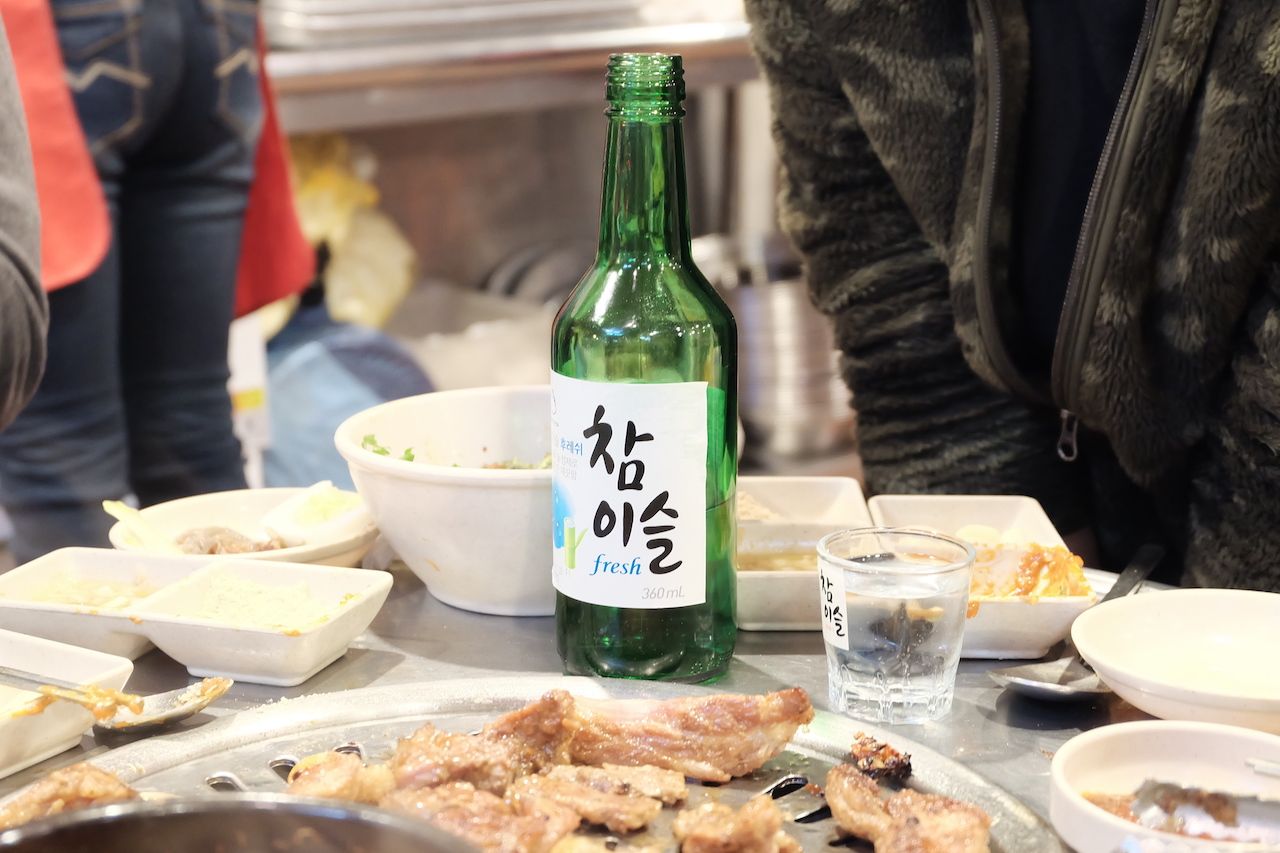 Soju’s clean flavor and clear color make it one the most versatile spirits to pair with food. You don’t need to stick to drinking it solely with Korean barbecue, although that’s where you’ll likely encounter it the most.

“You could drink soju with pickled herring, with Russian food, with Swedish food,” says Kim. “People can drink it with a meal, or with anju — snacks like nuts and dried fish.”

The Korean diet is meat-heavy, but it also incorporates banchan, vegetable-focused side dishes that are often pickled and acidic. Soju complements barbecued, smokey, and spicy beef just as well as kimchi. In the case of soju, it’s actually good that it’s less complex than wine. If you’re eating a meal with many layers of flavor, a wine might over-complicate or confuse your palate. Let the simplicity of soju enhance, but not overwhelm, your food.

“It cleanses your palate,” explains James. “Try having a mouthful of kimchi, and then try to drop some cabernet on the table. That’s a lot of action to handle. Sometimes you just need to clean your mouth up.”

When it comes to food, soju is flexible. In fact, there’s really only one rule when it comes soju: Make sure you drink it with a friend.