Every trip to Lake Tahoe starts with the same question: north shore or south shore? During summer, the quiet north shore caters to Thoreau types seeking the “On Lake Tahoe” experience while the out-all-day, up-all-night crowd bounces from jet skis to casinos farther south. Come winter, ski resorts like the north’s Squaw Alpine and south’s Heavenly decide the destination for many travelers.

If you ask me, though, that age-old quandary is a trick question: The region’s real treat lies just south of South Lake Tahoe in Hope Valley.

Twenty miles and a world away from Tahoe 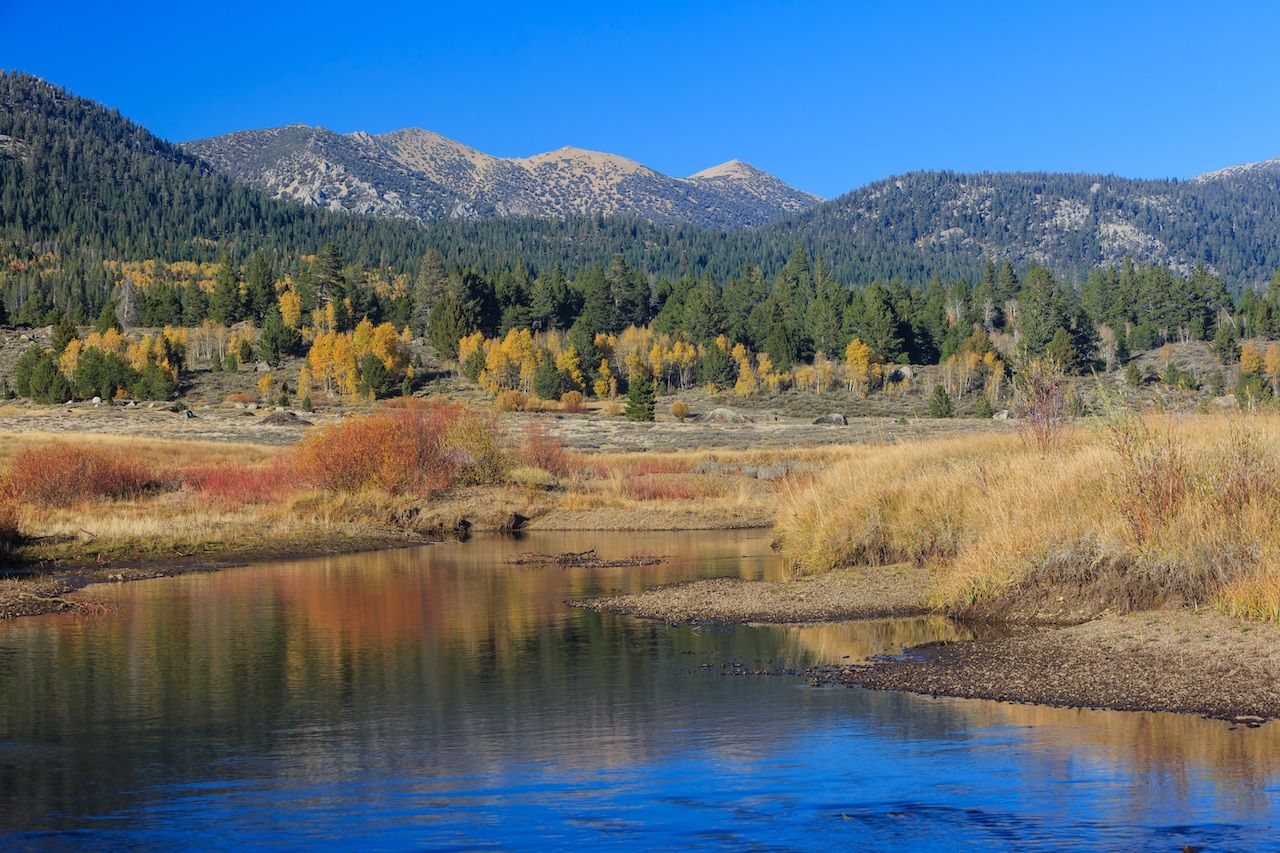 Pulling off the Carson Pass Highway at Pickett’s Junction, I might have thought I’d overshot my destination were it not for a sign for the Hope Valley Wildlife Area. Fall had begun to work its Midas magic on the valley’s aspens, turning the eastern slope of the Sierra Nevada gold like the groves a few states over in Colorado’s Rockies.

A series of placards at the wildlife area entrance, and what I later learned was Pickett’s Peak rising in the distance, confirmed that I’d arrived in Hope Valley. A hunting and fishing ground for the indigenous Washoe people for thousands of years, the signs explained, the valley was given its English name by Mormon settlers traveling to Utah around the start of the California Gold Rush. A few paces down the highway, a commemorative boulder elaborates on the valley’s heritage, memorializing its place on the historic Pony Express. 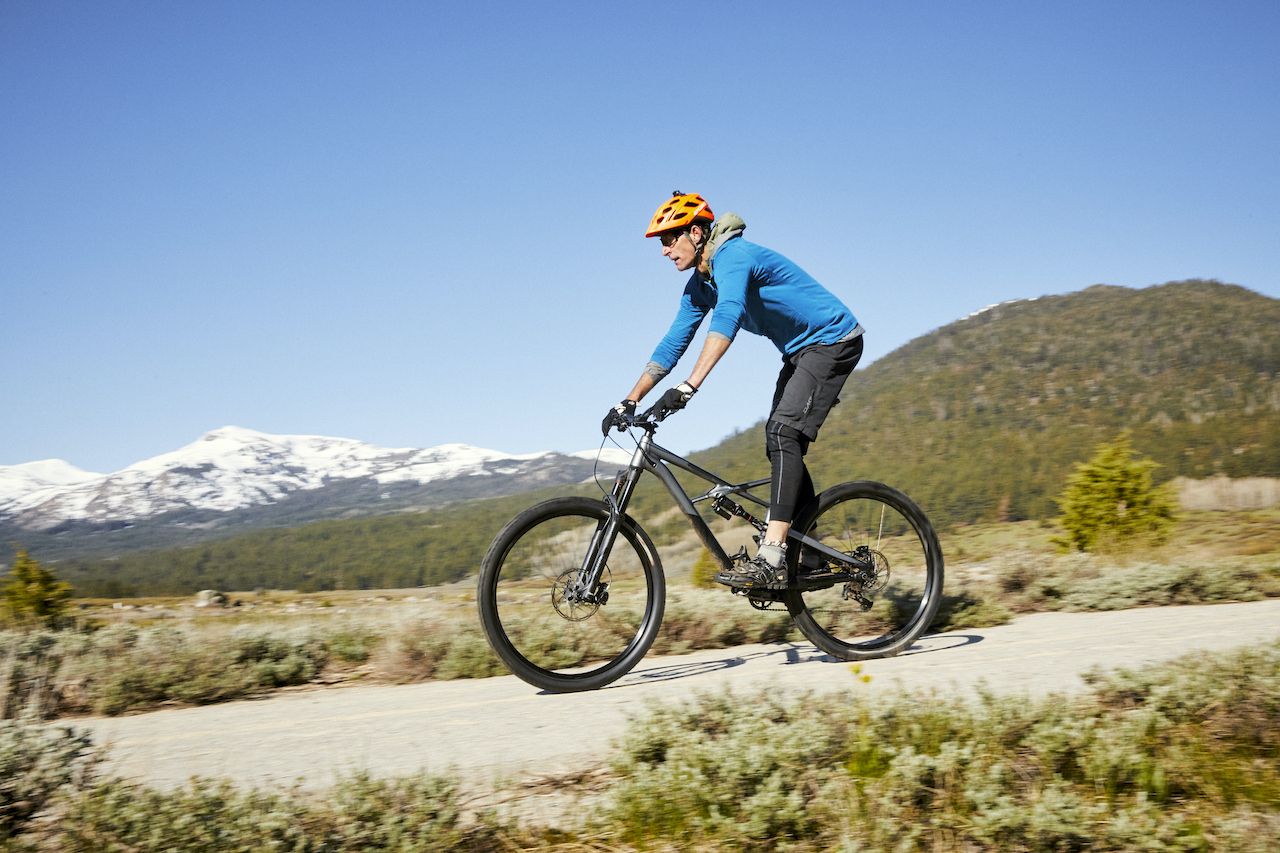 Today, it’s mainly outdoor recreationists who pass through this pocket of Alpine County, California’s least populated county. Trout species and small game draw anglers and hunters to the wildlife area. Hikers and mountain bikers favor the region’s granite peaks. At the first sign of snowfall, skiers descend on the nearby Kirkwood Resort, while those in the know zig 20 minutes northeast to Hope Valley’s cross-country tracks. Then, when winter melts into spring, Carson Pass trades enviable foliage for carpets of wildflower blooms, becoming a showroom for Western dog violets and blue-eyed Marys, sunny buttercups and bright red fireworks of wavyleaf Indian paintbrush.

Year-round, expect to find Hope Valley dressed in its seasonal best, serving up all the adventure Tahoe devotees covet — including access to Big Blue. The only thing missing here, thankfully, is the crowds.

A land of lakes

Visitors to the Tahoe area rarely need reminding to spend time lakeside. During summer, there’s little that can pry kayakers, paddleboarders, and water skiers from Lake Tahoe’s glassy surface — except the temptation to cool off with a plunge. Winter doesn’t deter boaters. Others break from the surrounding pistes to skirt the lake on snowshoes.

In Hope Valley, however, travelers can expect a surprising suggestion: skip Lake Tahoe altogether. Although the valley sits just 20 miles from the region’s most famous body of water, it’s ringed by lakes that feel private by comparison.

Caples Lake tops the list. Gaining roughly 1,000 feet in elevation over Lake Tahoe, this high-alpine swimming hole off the Carson Pass Highway opens to the best of Eldorado National Forest, with trails feeding into the Mokelumne Wilderness. It’s also stocked with rainbow and brown trout, which swim alongside natives species like lake trout, for both summertime anglers and ice fishers to enjoy. 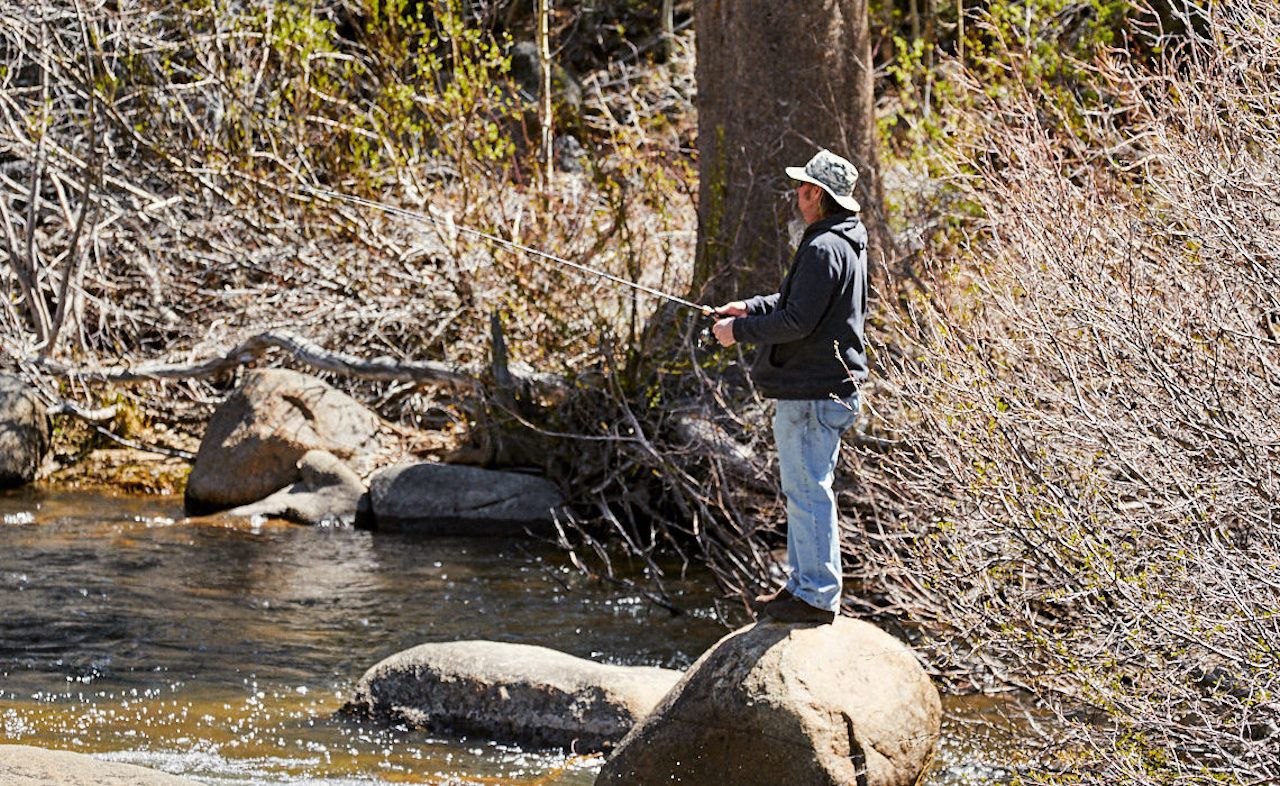 Fly fishers may prefer the West Fork Carson River, which begins at Lost Lake roughly 20 miles northeast of Hope Valley and runs right through it. Day hikers have options for exploring any of the region’s lakes on foot. The three-mile Scotts Lake trail and 2.5-mile Crater Lake trail that ascends toward Stevens Peak are particularly accessible. Both begin at the Blue Lakes Road turnoff a few minutes south of Hope Valley.

The Hope Valley Sno-Park also sits off Blue Lakes Road, which doubles as a popular snowshoeing and cross-country skiing route. Beginners might enjoy doing laps around the meadow while those up for the incline can take off up the road. The Blue Lakes themselves will steal your breath on sight, exercise notwithstanding. Visitors can even wake up to the view here at one of almost 100 campsites spread across the four main campgrounds and expansions.

A slice of history and a scoop of cobbler 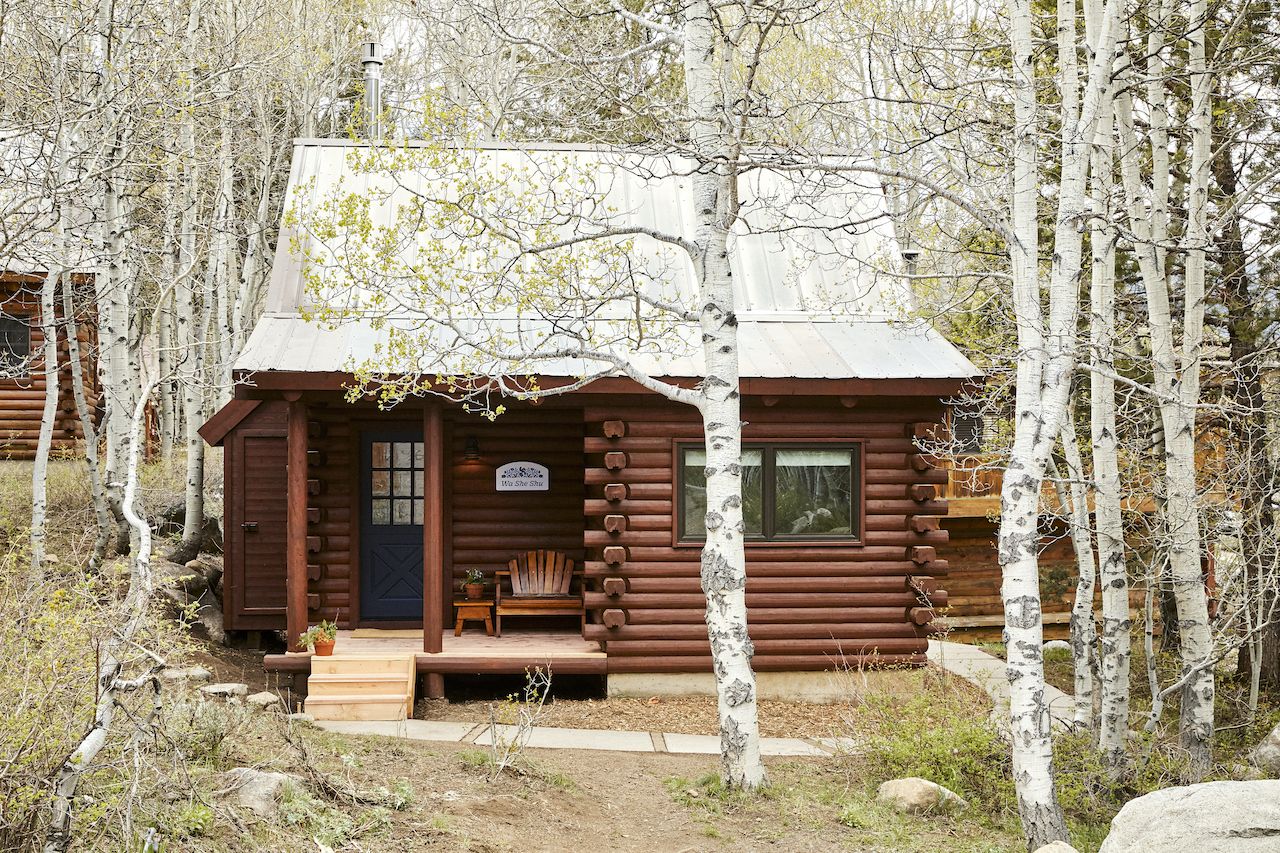 In the middle of it all is the Wylder Hotel Hope Valley, formerly Sorensen’s Resort. The nearly 100-year-old property was founded by Danish immigrant and onetime Carson Valley ranchhand Martin Sorensen, who built a cluster of cabins near Pickett’s Junction in 1926 that’s been frequented ever since. Since becoming a Wylder property in 2019, there have been major renovations to the 30 rustic yet well-appointed cabins — think little to no WiFi but a fully equipped kitchen, down to the spice rack — which share the 165-acre estate with seven deluxe yurts, 14 tent and RV sites, and a lone Spartan trailer.

Walks around the property reveal hidden charms at every turn, from fishing holes and fire pits to swing sets and an outdoor stage. Hotel guests can exit their cabins right onto Popo’s Trail, a seven-mile walking and snowshoeing route that starts on-site, while campers overlook the West Fork Carson River some 15 minutes away on foot. These accommodations are joined by a newly refurbished general store, located near the campsite, and Sorensen’s Cafe, whose wide-open patio welcomes overnighters and passersby alike. 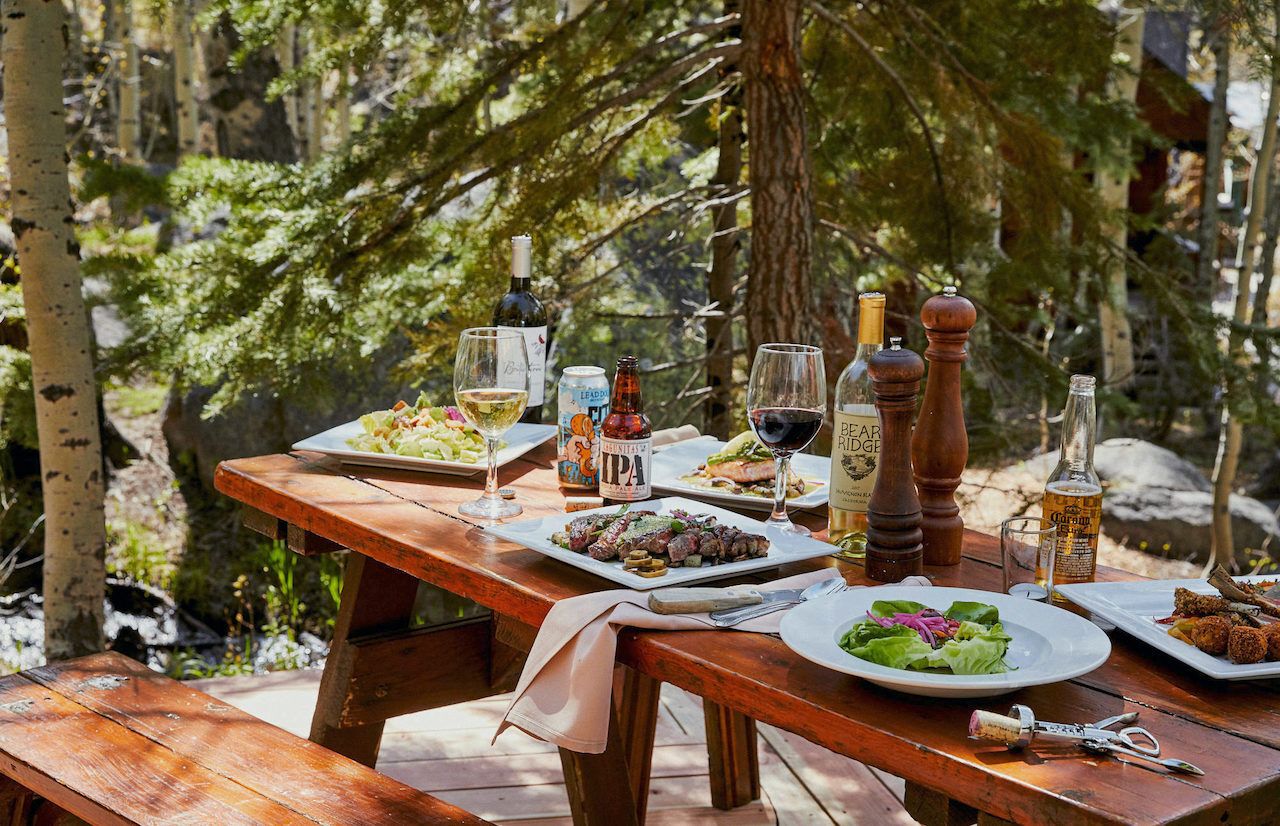 No cafe on the edge of wilderness, in this case Humboldt-Toiyabe National Forest, has any business sporting a menu as extensive or artful as Sorensen’s, which pays tribute to the property’s legacy not only in name but also in two of its offerings: the beef Burgundy stew, on offer for all three meals, and the berry cobbler, a decades-old recipe that joins classics like fresh-baked apple pie on the dessert menu. Whole pies are also sold at the general store, whose baker of almost a decade is one of few things that wasn’t replaced during Wylder’s refurbishment, and can be warmed up in your cabin’s oven.

Also heating up a few feet from Sorensen’s Cafe? A beautiful wood-fired sauna that guests can reserve for a pre- or post-dinner shvitz after a long day outdoors.

Continue south for a quiet night on the town 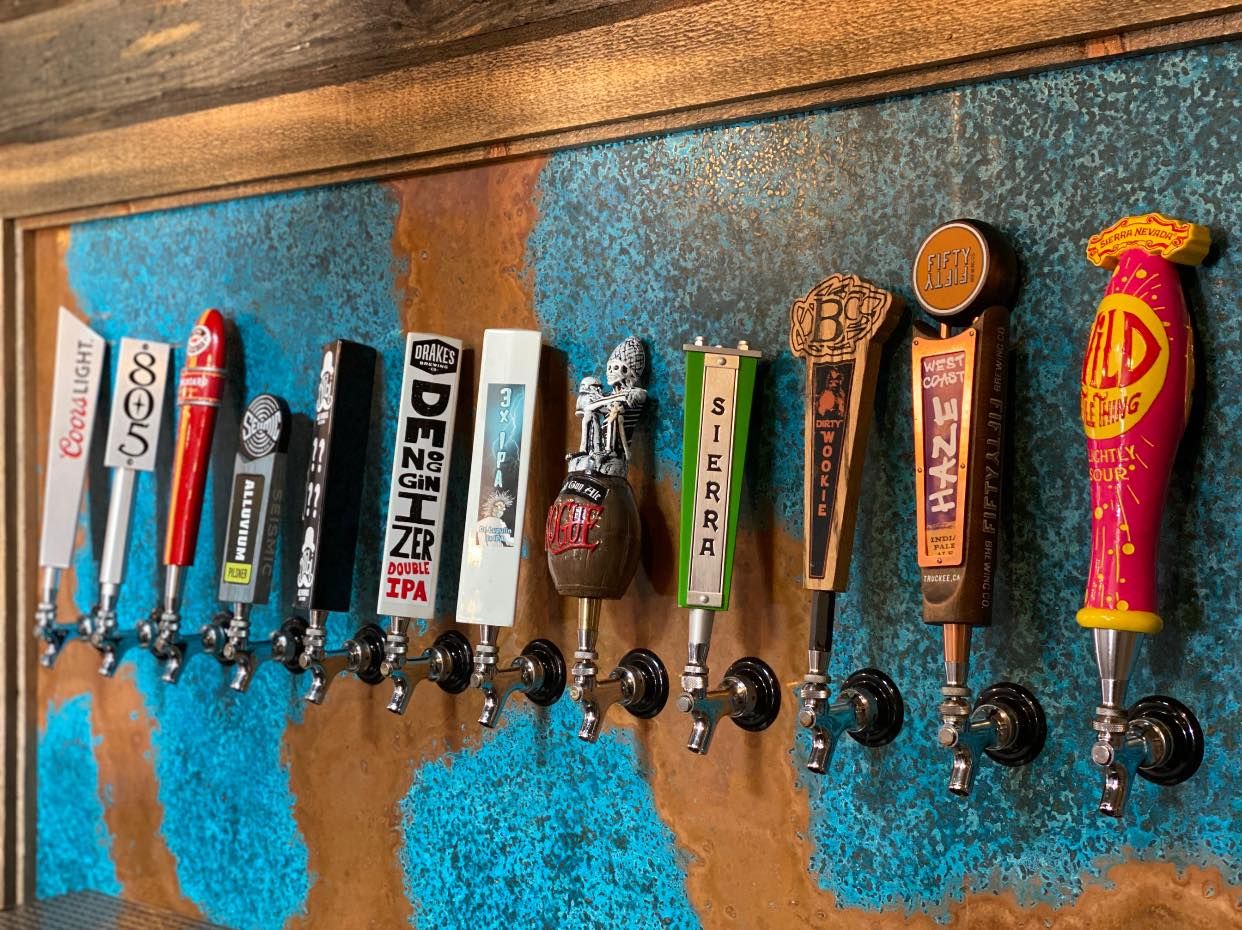 A few days in Hope Valley is long enough to forget all about Big Blue. The valley’s proximity to Lake Tahoe and its amenities is comforting, sure, but after acclimating to the quiet, the south shore’s nightclub and casino bustle loses much of its luster.

If, one night, you do feel like going for a beer on the non-existent town, consider driving 15 minutes farther southwest for a laid-back burger and a locally brewed ale in Markleeville. The seat of Alpine County, it’s a small community with a modest art gallery and museum, a couple of historic sites, and a barn-red general store. Cutthroat Brewing Company recently joined Markleeville’s modest restaurant scene, generating some local buzz. When the weather’s nice, grab a seat on the patio for better-than-expected pub fare, like blistered shishito peppers and sizzling chicharrones, and your drink of choice: beer, wine, cider, seltzer, boozy coffee or cocoa, or even a Sabe Sake-tail.

Time permitting, plan a longer outing and spend the afternoon at Grover Hot Springs State Park before heading into Markleeville. There’s nothing like a spa day in the middle of a high-alpine meadow, surrounded by even more peaks to pique your interest in a return trip.

TravelThe 25 Coolest Towns in America To Visit in 2021
Tagged
National Parks Epic Stays California, United States
What did you think of this story?
Meh
Good
Awesome