The idea of having excellent craft cocktails on hand in a hotel has gone from afterthought to added-bonus over the years. These days, hotel cocktails bars are not just an added bonus, but a reason for many travels to click “book now” when selecting that upcoming stay. High-end hotel bars have been around for a while now, of course, but recently, hotel cocktail bars have stepped up both decor and menus, offering delectable drinks in beautifully appointed lounges. The bulk of the best hotel cocktail bars are located in longstanding cultural institutions and see-and-be-seen destinations where what’s in the glass may matter less than the overall ambiance of the establishment.

New hotels are being built from the ground up with upscale cocktail programs in mind; sad fruit floating in Old Fashioneds, overly shaken Martinis, and sour mix be gone! Innovative cocktail menus featuring high end ingredients, along with showstopping bars and lounges, are part of the essential appeal and personality of these properties. At the same time, a few reimagined legacy hotels have come out swinging as part of recent overhauls, introducing game changing cocktails bars to attract new guests.

A modern fitness center, a rejuvenating spa, or a prime locale are worthy, bookable amenities. So is a great restaurant or a rooftop pool, if that’s your preference. Now it’s time that a standout cocktail program receives the same recognition. Here are seven hotels where you’ll want to book a room just grab a drink at the bar. 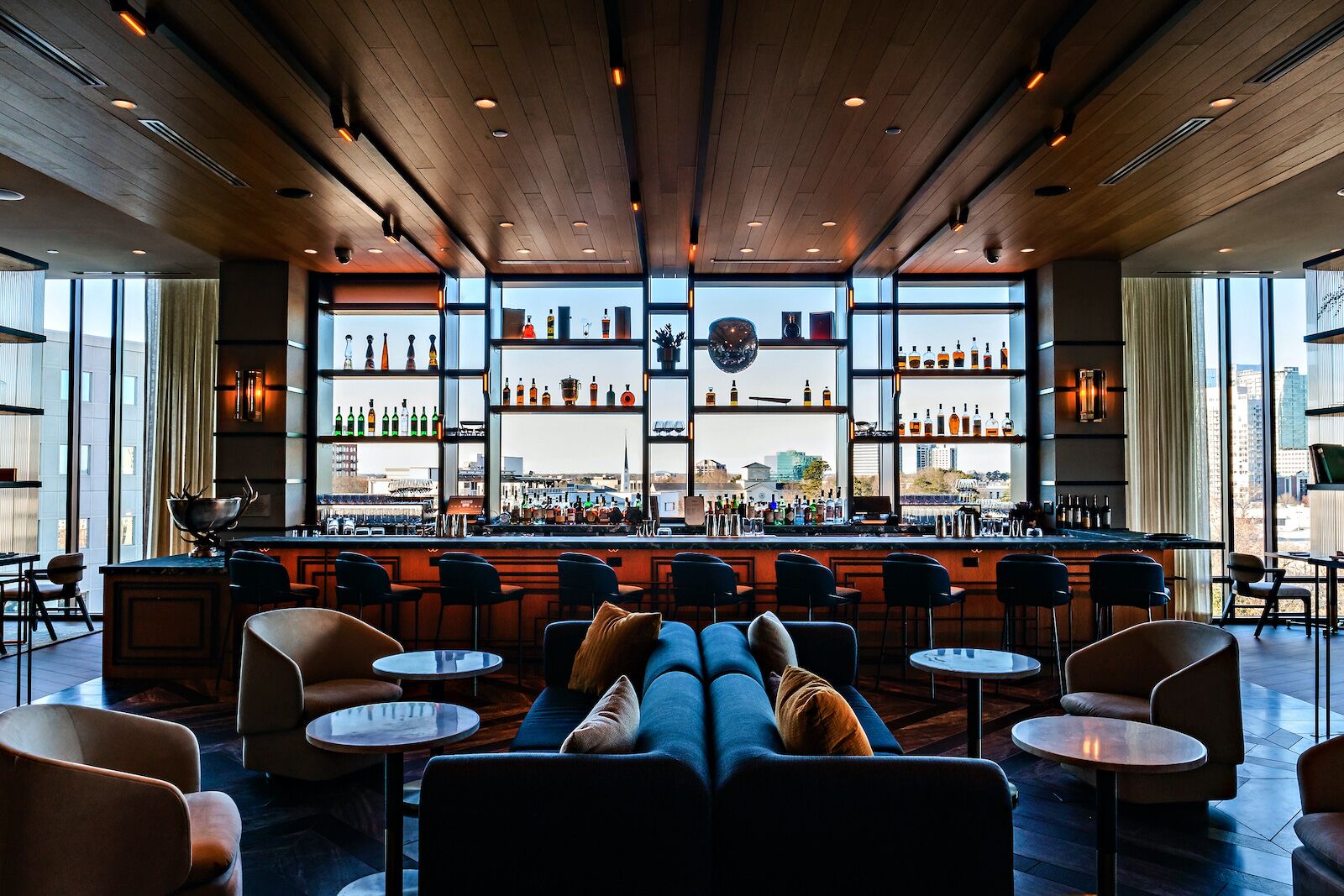 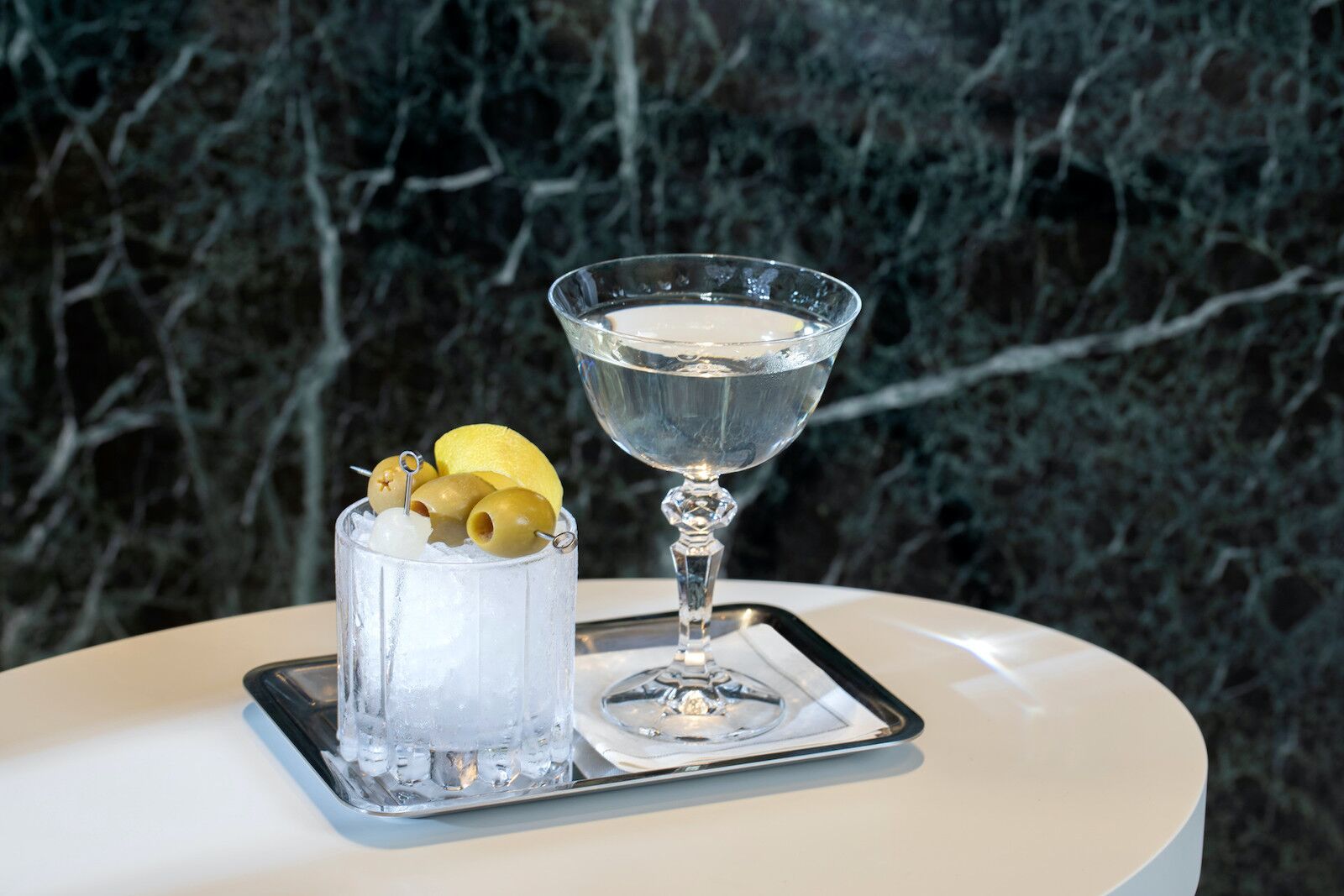 The Four Seasons New Orleans made its debut in summer 2021, and the beating heart of the property is its swanky lobby hotspot, the Chandelier Bar. Beverage manager Hadi Ktiri, an industry veteran in the city, spearheads a cocktail program that focuses on well executed classics in addition to inventive new takes. For the former, take on a massive martini with a sidecar of garnishes to munch on or add to your drink. For the latter, try a house libation like the World’s Fair Fizz. The cocktail is made in homage to the 1984 World’s Fair in New Orleans, and uses butterfly pea flower-infused gin to create a luscious lavender shade. It’s all set under the bar’s dazzling namesake – an attraction in and of itself – a 15,000-piece crystal chandelier.

What to try: Any New Orleans classic cocktail, such as a Sazerac, a Martini, or a house creation such as the World’s Fair Fizz. 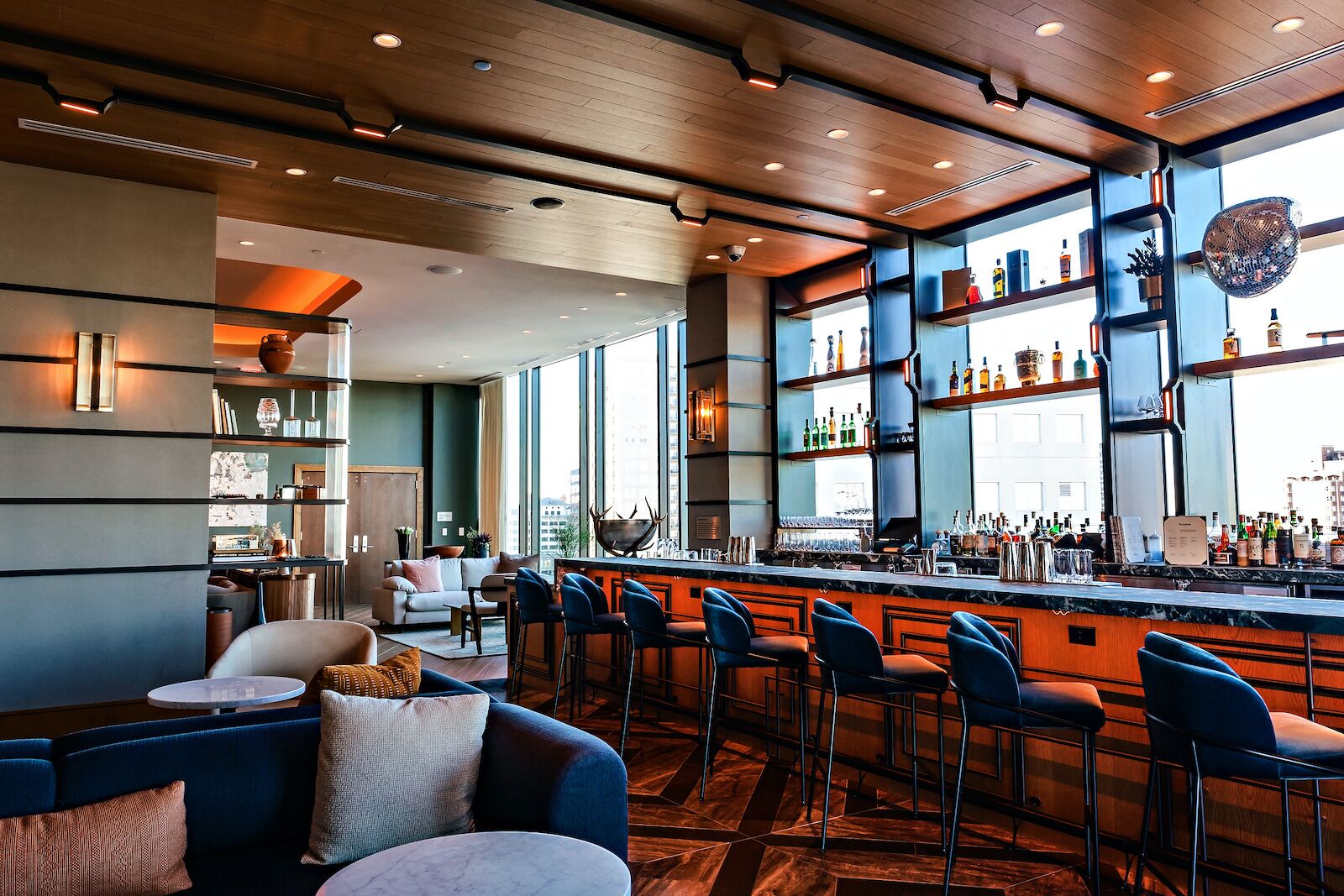 New to the Atlanta scene as of December 2021, food and drink is at the forefront of the offering at Thompson Buckhead. In addition to a lobby bar, and the Dirty Rascal restaurant, cocktails come to life at Tesserae, a member’s only rooftop bar and lounge. The bar program is spearheaded by Joe Alessandroni, who returned home to Atlanta after spending years working with a number of Singapore’s most sensational cocktail bars. Hotel guests staying in suites are also invited to the party. With bottle lockers, an excellent agave lineup, and unbeatable city views the bar has fast become a premiere hang out spot in Atlanta.

What to try: A Rhubarb Negroni, with mezcal, amaro and Campari, or the Quiet storm with mezcal, yellow Chartreuse, orgeat and lemon. 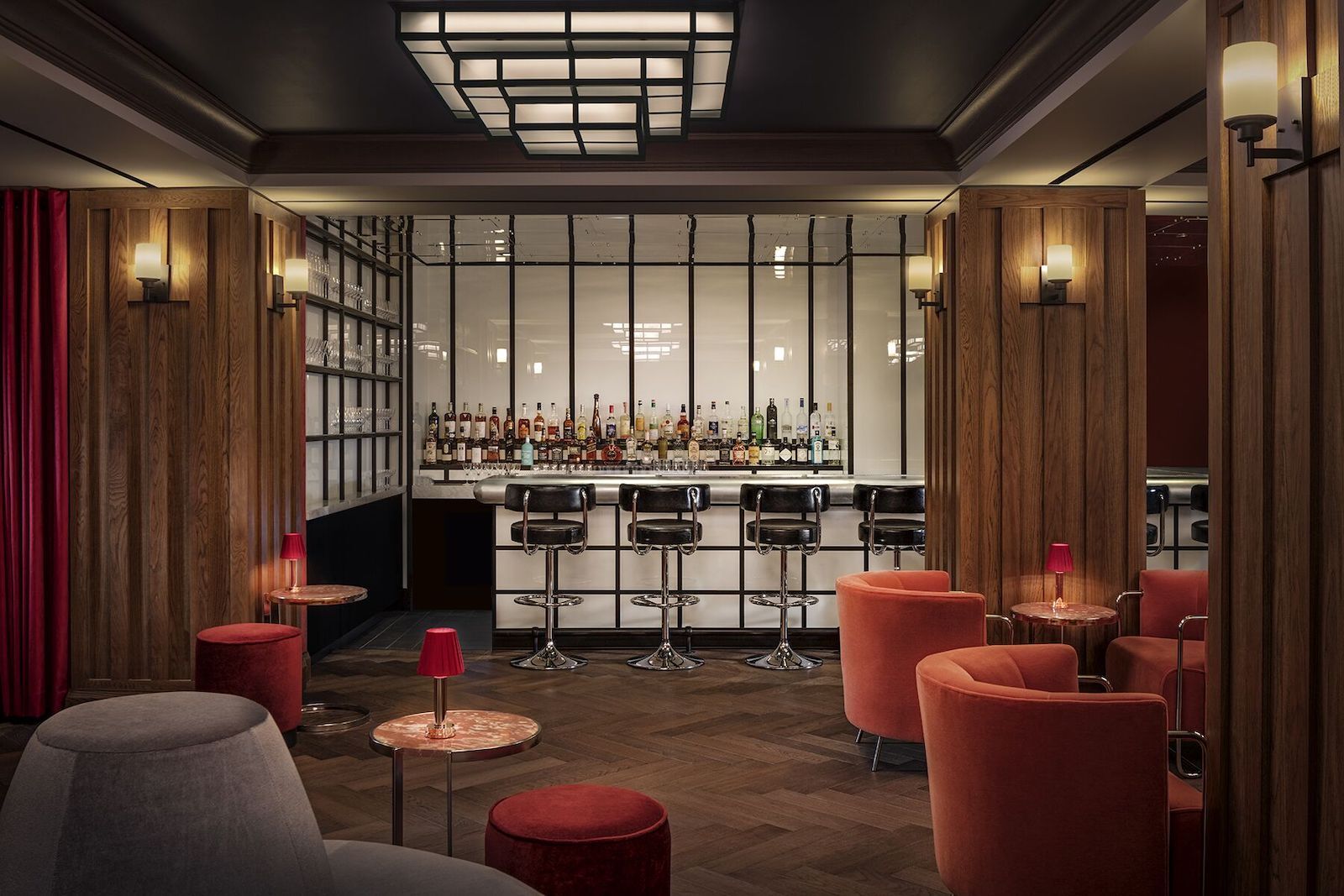 After initially debuting right before the pandemic, and then making a reappearance in fall 2020, Riggs DC has become a go-to choice for a stylish boutique stay in D.C.’s always bustling Penn Quarter. But if this hotel was in the suburbs you’d still make the trip just to visit the Silver Lyan. Located in a former bank vault, the Silver Lyan is the first stateside effort from London barman and entrepreneur Ryan Chetiyawaranda. A sultry environment with world-class drinks to match, Silver Lyan’s cocktails deliver both satisfaction and surprise, perhaps even pure delight, with every sip.

What to try: An elaborate cocktail menu makes it easy to choose drinks based on mood – “zesty, savory,” or “aromatic, rich,” so go with your gut. 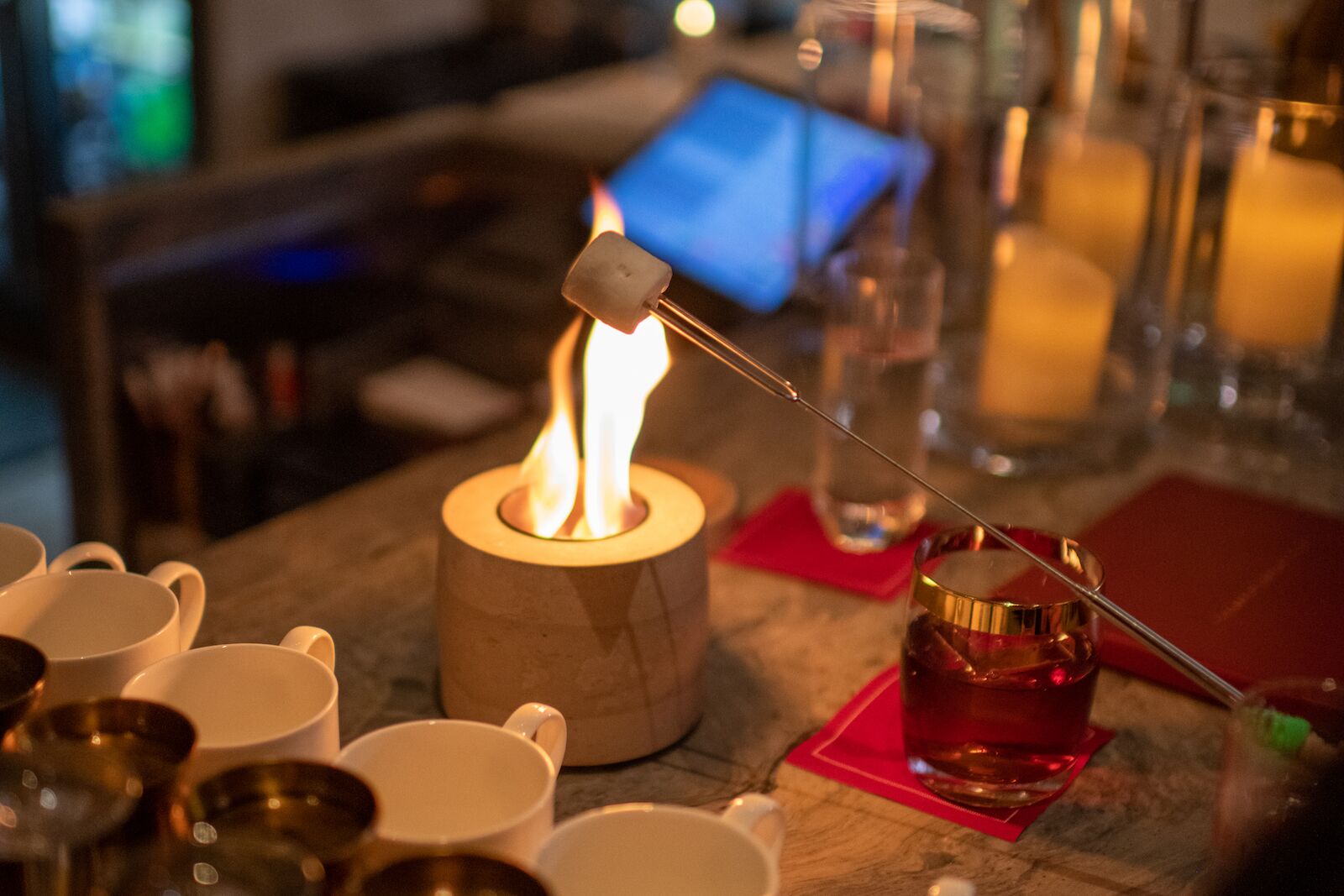 After five long years undergoing renovations, the Fairmont Century Plaza made its grand return in September 2021. The property aims to bring Hollywood glamor to the hotel, and the glitz is perhaps exemplified best of all at The Bar, its lobby bar and central gathering place. The property plays upon its deep musical lineage with cocktails riffing on song lyrics, along with a cocktail Set List, which guests can pull up on Spotify once they’re back home.

What to try: The K Pop and Lock (soju and kimchi juice with vodka, ginger, and lemon) or the Cold Brew is for Closers (cognac, cold brew liqueur, amaro, rum, and demerara sugar). 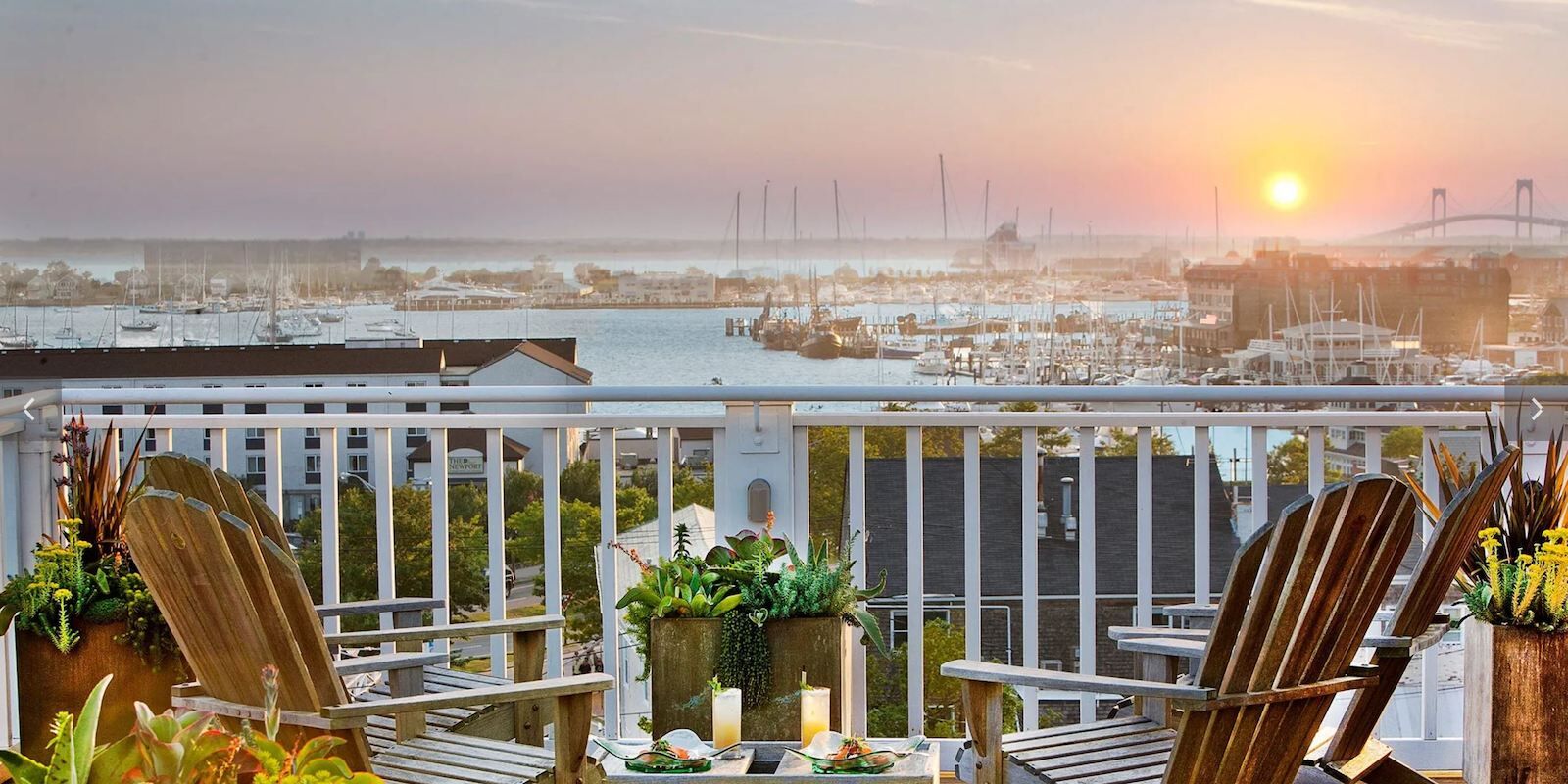 Newport’s The Vanderbilt, an Auberge Resorts Collection hotel, opened in 2021, converting a mansion constructed for its eponymous family in 1908. The property wants guests to get lost in the nostalgia of the gilded age, with offerings such as The Green Hour, an hour-long absinthe session held within a hidden closet bar locked away by skeleton key. Fear not, the absinthe is served up in delightful cocktails and comes paired with light bites, too. Elsewhere, keep on pretending you’re a Vanderbilt visiting your private summer retreat by treating yourself to drinks in the hotel’s many different lounge areas, from spritzes in The Garden to sunset cocktails on The Roof Deck.

What to try: Absinthe cocktails during a private Green Hour experience, such as the Absinthe Frappe or Vieux Carre. 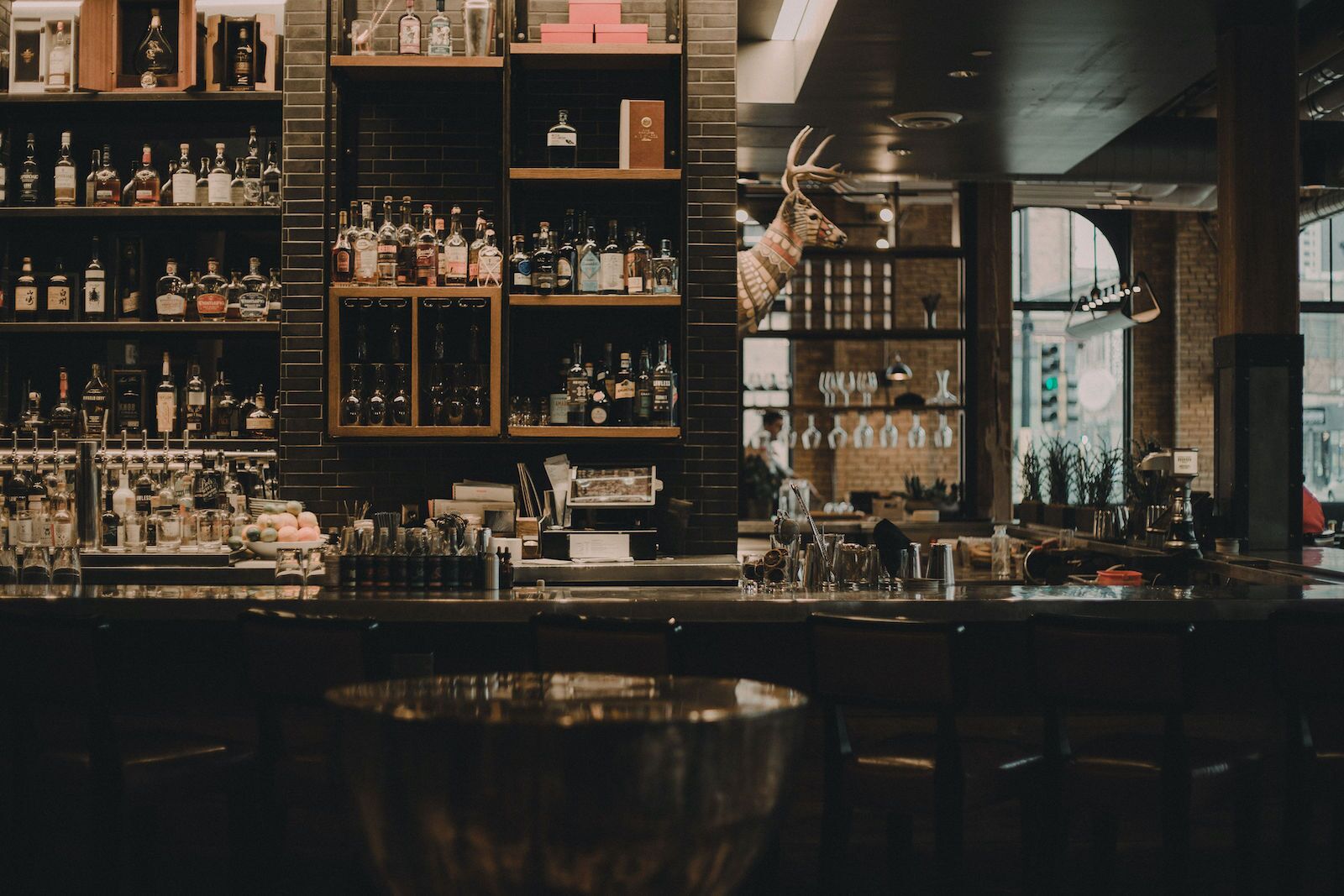 When Minneapolis’s Hewing Hotel returned from an initial pandemic closure, the culinary team hit the ground running with the help of a new chef spearheading its Tullibee restaurant. What didn’t need any retooling was an already sizzling cocktail program found at the hotel’s bar and lounge, which serves as its living room, hangout, and meeting place. The standout drinks menu includes Minnesota craft spirits and private barrel whiskey selections deployed in both classics and house originals. There’s also a list of highball riffs which make use of the official, and much coveted, Suntory highball machines for perfect, crisp effervescence in every sip.

What to try: A Classic highball with Toki whisky and grapefruit essence, or the Hewing Old Fashioned with a private selection Knob Creek barrel.

Lifestyle hotel Tommie Hollywood opened its doors at the end of 2021, and first-time guests or locals popping in for the evening would be wise to arrive both hungry and thirsty. Fill your belly at KA’TEEN, from chef Wes Avila, then head to the rooftop pool and lounge Desert 5 Spot, a retro-Palm Springs kitsch fest with live music, big crowds, and of course, excellent cocktails. Those drinks are named for honkytonk and country classics, ranging from Jolene to Ring of Fire, and are served up in fun glassware and presentations to help you ham it up all the more.

What to try: The Walk The Line (delightfully blue and “glitter-infused,” with gin, cucumber, lemon, and prosecco), or for you and 10 of your closest friends, the Make it a Cactus (a behemoth cactus-shaped jug of margaritas).