New York City has it all, whether you want to go on a grand museum tour, see a Broadway show, get your fill of global cuisine, or all of the above. The vibe also varies from neighborhood to neighborhood, from the prim and polished Upper East Side to the street-art covered warehouses of Bushwick. But one thing is a constant fact: New York is home to some of the most luxurious hotel experiences in the world.

Even if you prefer boutique accommodations or don’t have the budget to stay at one of these grandiose establishments, you can still put on the ritz for an evening and visit one of the city’s many luxury hotel bars. These eight hotel bars boast excellent bar programs, tasty snacks, and beautiful design.

1. The Mark Bar at The Mark

This chic Upper East Side hotel doesn’t take itself too seriously, and that’s exactly what makes it great. From the website’s playful illustrations to amenities like Jean-George picnics and special Woof Woof Kits for four-legged friends, The Mark is a special place. The Mark Bar is one of the best rooms in the hotel. The punchy space is designed with furnishings by Guy de Rougemont and Vladimir Kagan, and the seats are occupied by stylish folks seeking a pre-dinner drink or post-theater nightcap. Stop in for The Mark Cocktail, a bubbly delight made with Prosecco, lychee, and raspberry.

2. The Bar at Baccarat Hotel

Opulence touches everything at this Paris-inspired hotel, where you can order Champagne to your room with the press of a button and admire the Baccarat crystal decor glistening around every corner. Even if you’re not experiencing pied-à-terre living at Baccarat Hotel with an overnight stay, you can sip in the most luxurious fashion at The Bar. The space is New York and Versailles at the same time, with dark leather seats, a checkerboard floor, and stunning red crystal chandeliers. Try the Jade Moon — a mix of gin, jalapeno, sake, cucumber-mint foam, Thai basil, and lime — or splurge on the Baccarat Old Fashioned, which features a ball of Angostura cotton candy that melts into the drink.

3. Jacques Bar at The Lowell

The Lowell is known for its impeccable concierge service, tree-lined surroundings, and cushy rooms with wood-burning fireplaces. The hotel’s Jacques Bar is a neighborhood favorite, and you’ll often find locals sipping martinis and munching on bar snacks in the warm and inviting room. Kick back with a classic like a French 75 or boulevardier, or try one of the signature cocktails like La Piscine, a refreshing mix of Crémant d’Alsace, Aperol, and orange blossom water that will channel seaside living anytime of year. Order a snack from the raw bar if you’re feeling peckish, or satisfy a bigger appetite with the caramelized onion cheeseburger.

4. The Palm Court at The Plaza Hotel 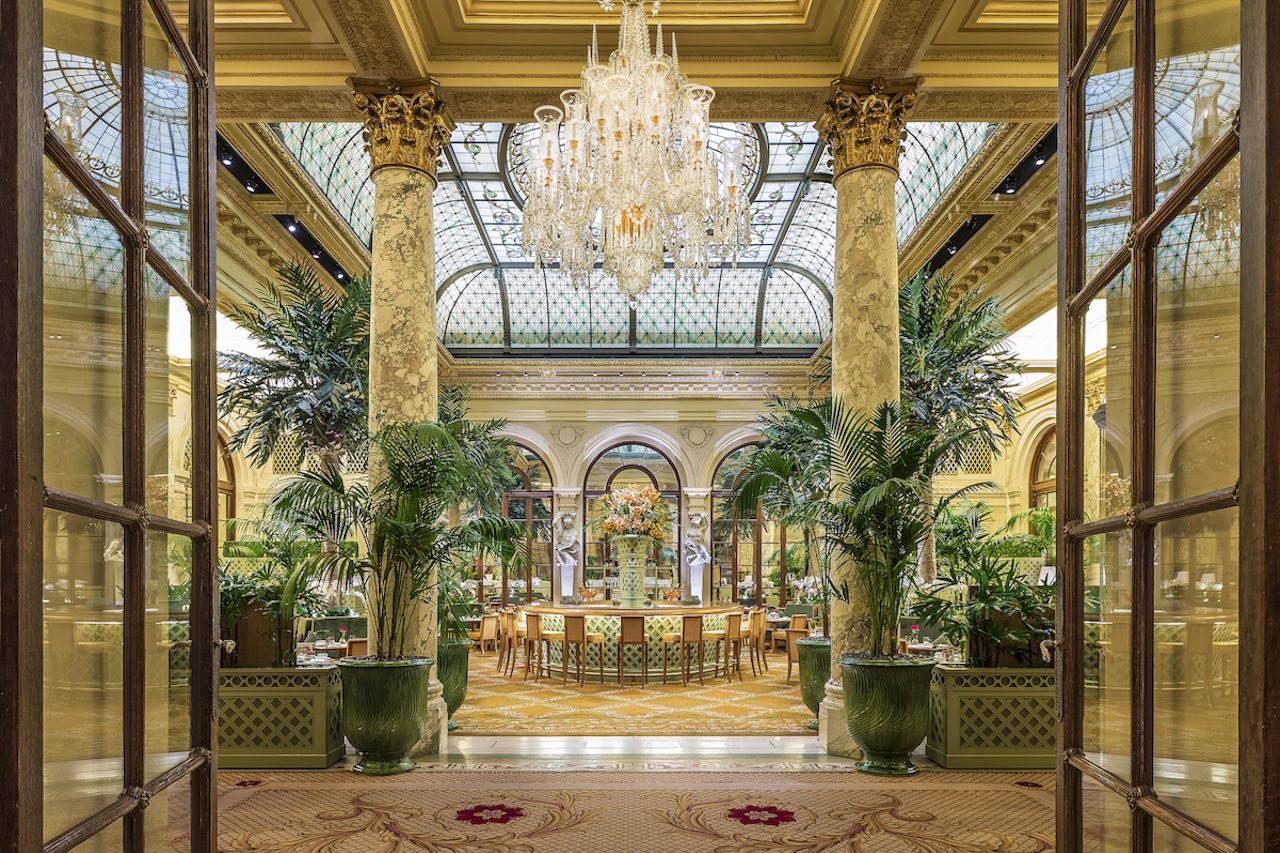 This iconic New York institution has been welcoming guests to its Central Park South location for more than a century, so it’s certainly worth a visit even if you aren’t staying in one of the elegant rooms. The Palm Court at The Plaza serves a fabulous afternoon tea with towers of finger sandwiches and pastries, but you’ll want to settle in for evening cocktails. Take a seat at the bar, where you can admire ceiling-high palm trees and a magnificent stained-glass dome overhead. Try the signature Imperial Plaza, a bubbly mix of apricot eau de vie, brut Champagne, honey, and lemon juice.

5. The Bar Room at The Beekman, a Thompson Hotel

The facade of 5 Beekman Street was declared a New York City landmark in 1998, and the stunning The Beekman, a Thompson Hotel opened there in 2016. Designer Martin Brudnizki restored the building to its former glory, and there’s no better place to experience its splendor than sipping a cocktail in The Bar Room at Temple Court. Take a seat underneath the nine-story pyramidal skylight and admire its Victorian grandeur while you contemplate your drink order. The Bar Room’s Vesper is the best in town, but the signature cocktails shouldn’t be overlooked. Spring for the 6pm in Osaka, which is made with Haku vodka, Luxardo Bitter Bianco, passionfruit, orgeat, grenadine, and lemon. 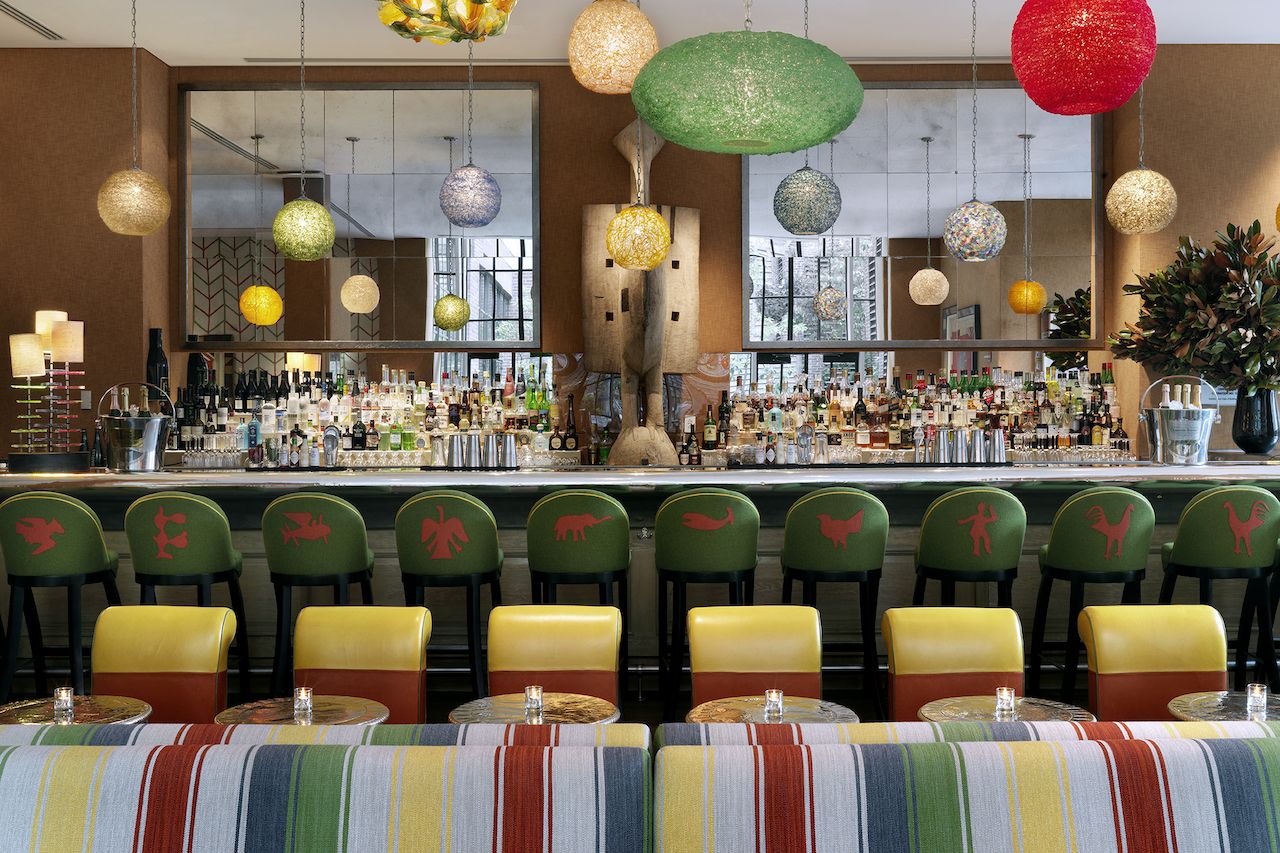 Fans of English elegance will love the Crosby Street Hotel, which features charming, colorful design and fabulous one-of-a-kind rooms. The Crosby Bar is one of Soho’s most beloved watering holes. Here, New Yorkers mix with out-of-towners from early morning breakfasts to last call. Pick a seat at the bar, on one of the brightly striped banquettes, or, weather permitting, outside on the verdant terrace. Order the Peppers & Peach (a sweet-spicy mix of reposado tequila, peach nectar, lime, and red chiles) while you munch on bar snacks like the tomato, mozzarella, and basil flatbread.

It’s difficult not to fall in love with Park Hyatt New York, which has an air of chic, serene luxury and understated elegance. Take the elevator up to The Living Room, which kind of feels like someone’s very fancy Manhattan apartment, for some of the best cocktails in the neighborhood. Pull up to the bar for the best seat in the house, where you can take in floor-to-ceiling window views and watch the talented bartenders at work. The drink menu changes seasonally, but you can always expect perfectly made classic and signature cocktails, along with thoughtful non-alcoholic drinks as well. The Bamboo (made with sherry, dry vermouth, and an Italian fortified wine) never disappoints. 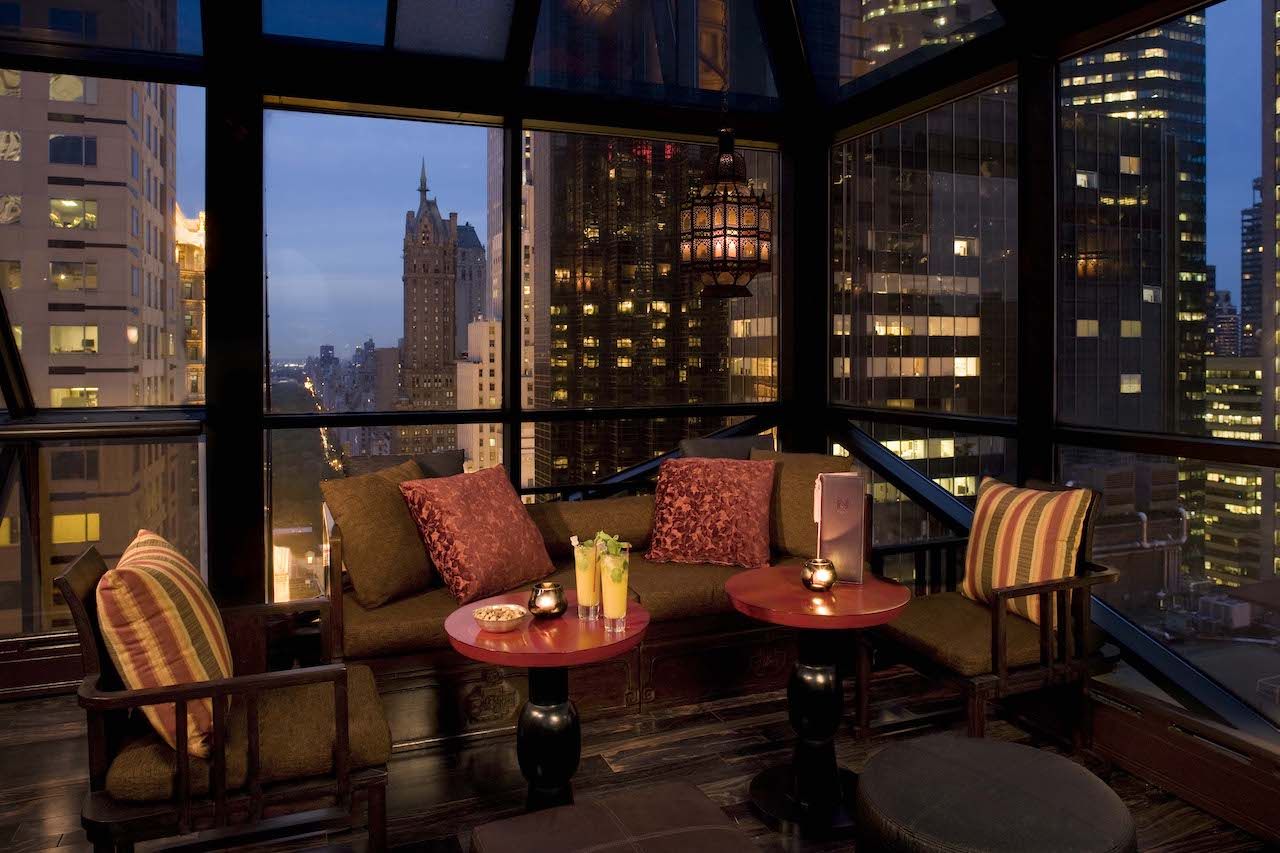 The Peninsula New York is the definition of luxury with its architecturally-stunning facade, grand staircase, and five-star spa. For dramatic skyline views, ascend to the rooftop bar Salon de Ning, which features two outdoor terraces and a handsome interior bar. Try the Pop Fashion, an old fashioned variation with popcorn-infused Maker’s Mark and salted caramel simple syrup. During the winter months, the space is transformed into Chalet de Ning with two après ski-inspired domes that will keep you warm as temperatures drop.