According to the Guinness Book of World Records, Queens, New York, is the “most ethnically diverse urban area on the planet.” Exploring New York City’s largest borough is proof that the joy of discovering new cultures, food, languages, and ways of life — in short, the magic of travel — doesn’t always require expensive airfare or long journeys.

More than 130 languages are spoken in Queens. In Jackson’s Heights’ aptly-named Diversity Square, it’s not uncommon to hear robed monks chat in Tibetan on a park bench, while a man selling momos from a food cart takes orders in Nepalese. In Astoria, you may hear old-timers kibitz in Cypriot or Serbian as they smoke cigarettes and sip Greek coffee outside a storied bakery that makes the best baklavas in town. Over in Woodside, the air is often filled with the sounds of a family catching up in Spanish over paper plates of birria tacos cooked to perfection on a streetside grill. Queens sounds, looks, and smells like a microcosm of the world.

While the borough doesn’t have as many Michelin-starred restaurants or expensive tasting menus as Manhattan, Queens is king for authentic, home-style plates from cuisines as far-ranging as Uzbek, Bangladeshi, Colombian, Guyanese, or Brazilian. So strap on your walking shoes, work up an appetite, and hop on the 7 train toward Flushing. From the city’s best dim sum, to celebrated Greek and Italian restaurants, to authentic Central Asian shashlik, the following neighborhoods showcase Queens’ dazzling diversity and, of course, fabulous food. 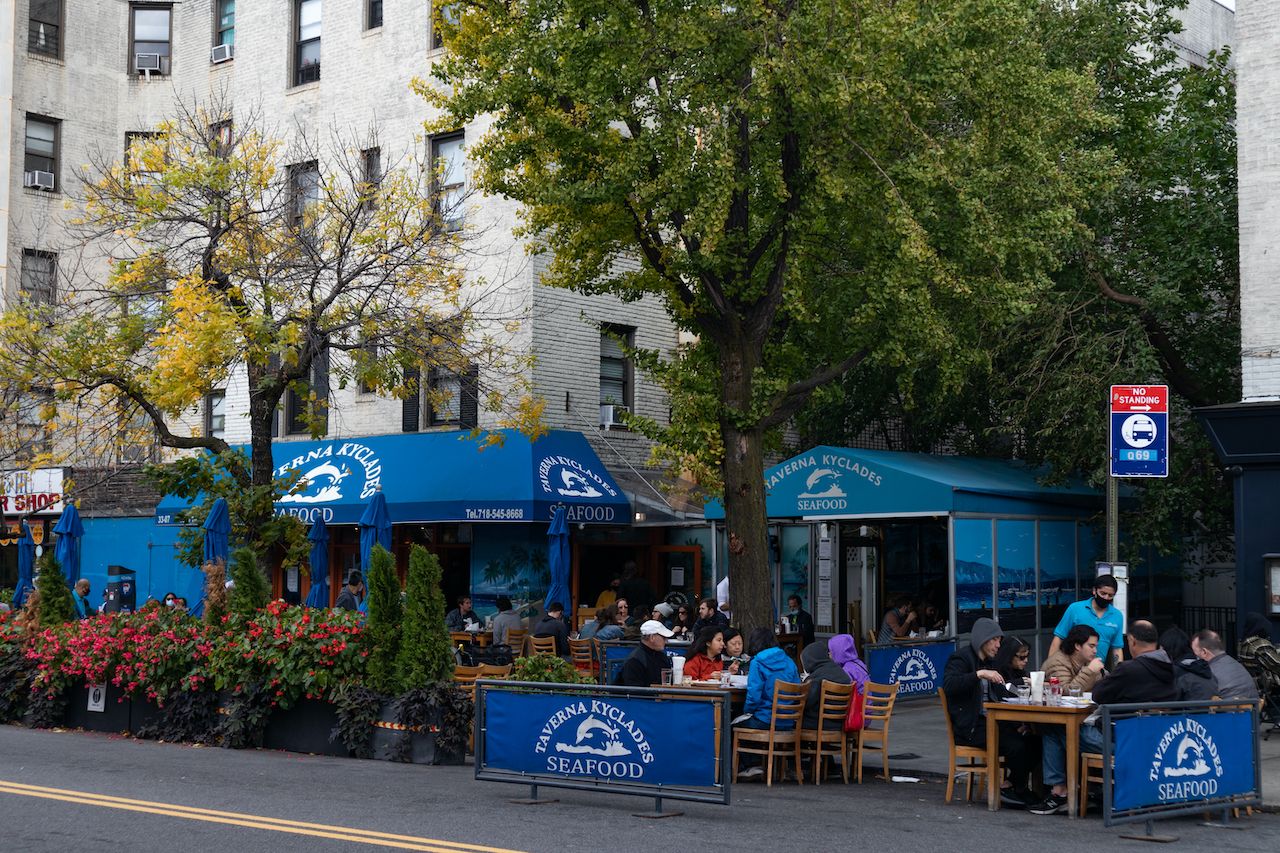 With more than 150,000 residents, Astoria is one of the largest neighborhoods in Queens. It takes its name from John Jacob Astor, a mid-19th century New York real estate tycoon (Astor Place in Manhattan gets its name from the man as well). Germans were among the earliest immigrants to settle en masse in Astoria, especially after Steinway & Sons, the celebrated piano makers, established a company town here — a neighborhood still referred to as Steinway. Greeks from the Balkan Peninsula and Cyprus arrived in large numbers in the early-to-mid 1900s, and in the area around Ditmars Boulevard you’ll find Orthodox churches and buildings adorned with street art depicting classical mythology. Most importantly for this case, there’s also a slew of Greek tavernas, grocery stores, and bars.

Taverna Kyclades is a Greek-American neighborhood favorite on Ditmars Boulevard that specializes in seafood. Many of the dishes are cooked with little more than a few simple Mediterranean ingredients — olive oil, garlic, a squeeze of lemon, and not much else — allowing the fish to speak for itself. The branzino and the scallops are particularly scrumptious, and the retsina, a Greek wine fermented with pine sap, pairs well with the delicate, citrus-spiked seafood. Be prepared to wait for up to an hour on weekends and busy nights.

If you’re looking for something faster, head for a deli. Sal, Kris, & Charlie’s Deli right off Ditmars is an Astoria institution that serves goliath gyros (pronounced “yee-rohs” in the parlance of New Yorkers). Be warned: The sandwiches are so massive and packed with cured pork that finishing “the Bomb” or “Italian Special” in one-sitting requires a Joey Chestnut-level appetite. For a strong Greek coffee paired with a cannolo or kourabiedes, walk a little farther down Ditmars to Lefkos Pyrgos.

For millennia, the Central Asian oasis of Bukhara — an ancient city that’s now within the borders of Uzbekistan — was home to a large and vibrant Jewish community. Bukharian Jews represented the most eastern major branch of the Jewish diaspora, and developed a culture that borrowed heavily from their Turkik, Mongolian, and Persian neighbors. After the 1970s, according to The New York Times, almost all of Uzbekistan’s Jews left their ancestral land. Many settled in the Rego Park and Forest Hills neighborhoods of Queens.

Uzbek cuisine, developed on the rugged grasslands of Central Asia, centers around grilled meat, basmati rice, naan-style bread, and spices like sumac, cumin, and dill. The national dish of Uzbekistan is plov, which is fried basmati rice decorated with meat — usually lamb, but sometimes beef, goat, horse, or a combination thereof. Other classic Uzbek fare includes shashlik (smoky meat skewers served with thinly sliced onion) and manti (dumplings topped with yogurt and dill). Jewish-Uzbek cuisine differs slightly from Muslim-Uzbek cuisine in that horse meat is verboten but alcohol is embraced.

Cafe Arzu and Shashlichnaya are great starting points for exploring Uzbek cuisine and experiencing the spirit of Rego Park. Both restaurants are famous for plov, but bring some friends because an order of the heavy rice dish is recommended for groups of three or more. 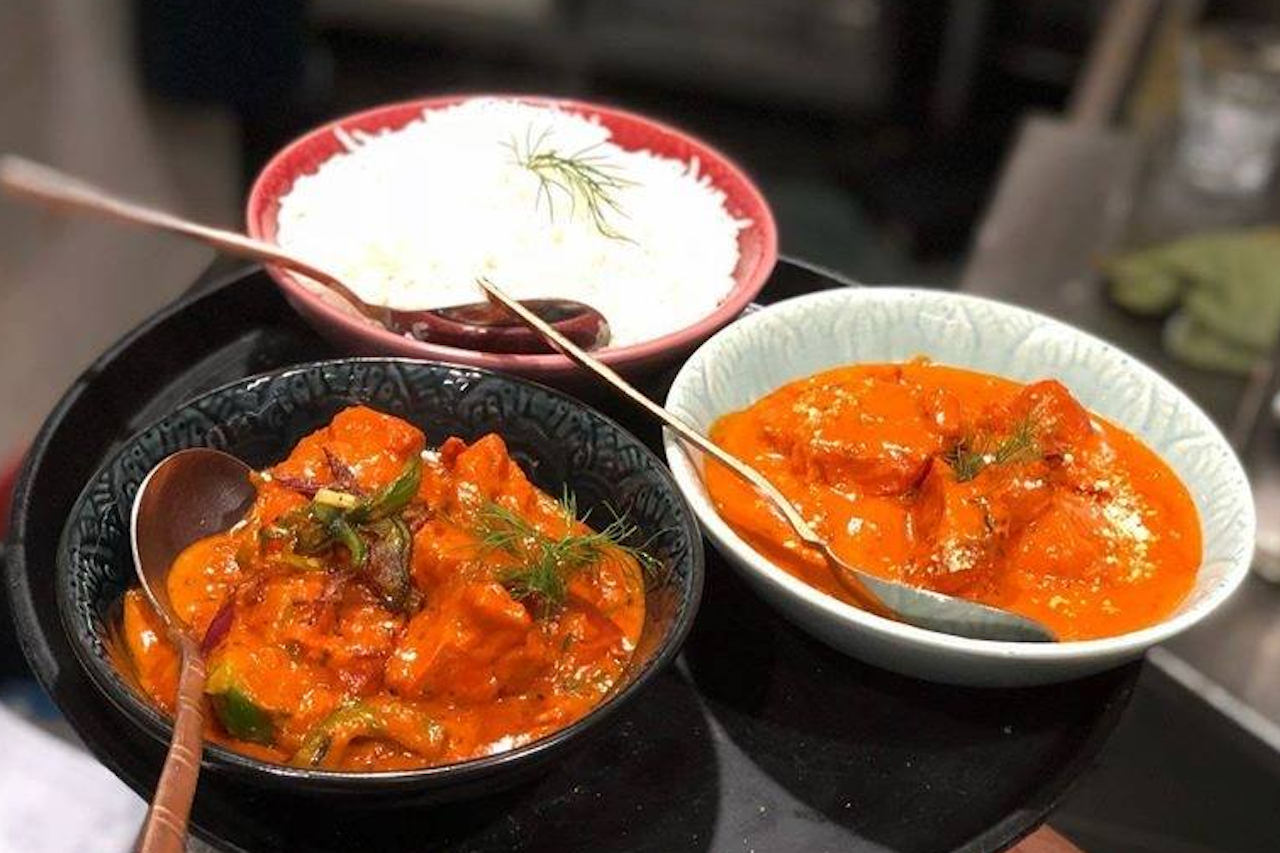 With more than half of its residents born outside of the US, Jackson Heights could be considered the quintessential Queens neighborhood. Today, the people who live in the neighborhood primarily come from South Asia and countries around the Himalayas. To walk around Jackson Heights on an eating tour is to see and taste a blend of the cultures, peoples, and cuisines of Bangladesh, Nepal, Tibet, Pakistan, and India.

Angel Indian Restaurant has a small, tight menu and executes Punjabi classics flawlessly. Be sure to try the panipuri appetizer, which is a crispy pastry partially filled with potato and spices then is topped off with a citrusy gravy. The biryani and butter chicken are guaranteed home runs. Alcohol is BYOB, so bring your favorite bottle of riesling or gewurztraminer — refreshing, sometimes sweet, wines that pair perfectly with the heat and spice of Indian masalas. Got a sweet tooth for some halva or gulab jamun with some spicy chai? Raja Sweets and Fast Food, right down the street from Angel, offers exquisite cardamom- and cinnamon-spiked pastries.

While New York City’s most famous Chinatown is in Manhattan, Flushing, located off the last stop on the 7 train, may well be where to find the city’s most authentic Chinese cuisines. The area around Flushing was part of Dutch New Amsterdam and originally called Vlissingen, a placename the British anglicized to Flushing after wresting the territory from the Netherlands. Taiwanese immigrants began arriving in large numbers in the 1970s, followed by people from Fujian, Canton, and other regions of China. Today, Chinese characters outnumber English on Flushing’s streets, and the neighborhood is home to countless restaurants and grocery stores from nearly every region of China.

If you were to pick an official dish of Flushing, the honor would likely go to the soup dumpling, a Shanghainese delicacy containing meat — usually pork, crab, or sometimes sea cucumber — that’s bathed in a savory broth and enclosed in a dumpling wrapper. Nan Xiang Xiao Long Bao, a Bib Gourmand award winner, is a Flushing institution and serves some of the best soup dumplings, scallion pancakes, noodles, and other Shanghainese classics. Not surprisingly, lines are long during lunch or dinner, and sometimes even the in-between hours. The original Xi’an Famous Foods is in Flushing, and the restaurant, now with 15 locations across the city, specializes in the dishes of the Shaanxi province in northwest China. Xi’an, the ancient imperial capital, was a great crossroads of civilizations, and the region’s food borrows heavily from Persian, Uighur, and Indian influences. Xi’an-style cuisine tends to be meat-heavy, and noodles are generally made with wheat instead of rice.

Regardless of where you choose to go in Flushing, or just about anywhere in Queens for that matter, you won’t be disappointed.