Travel, set out southwest from Madrid past the burnt-gold fields of the Spanish state of Castilla and then through the dark green holm oak dehesas, or managed forests, of Extremadura state. Trace the Tagus River as it renews its sapped strength with snowmelt from the Sierra de Gredos mountains, giving it the power to slice through the granite bedrock of this hard land on its way to seemingly far-off Lisbon and the sea. This is a road trip through la Raya, the Iberian Rift. A ride that hugs both sides of the border and blurs the edges of Spain and Portugal into a truly Iberian stew.

One of the last wild corners of Europe 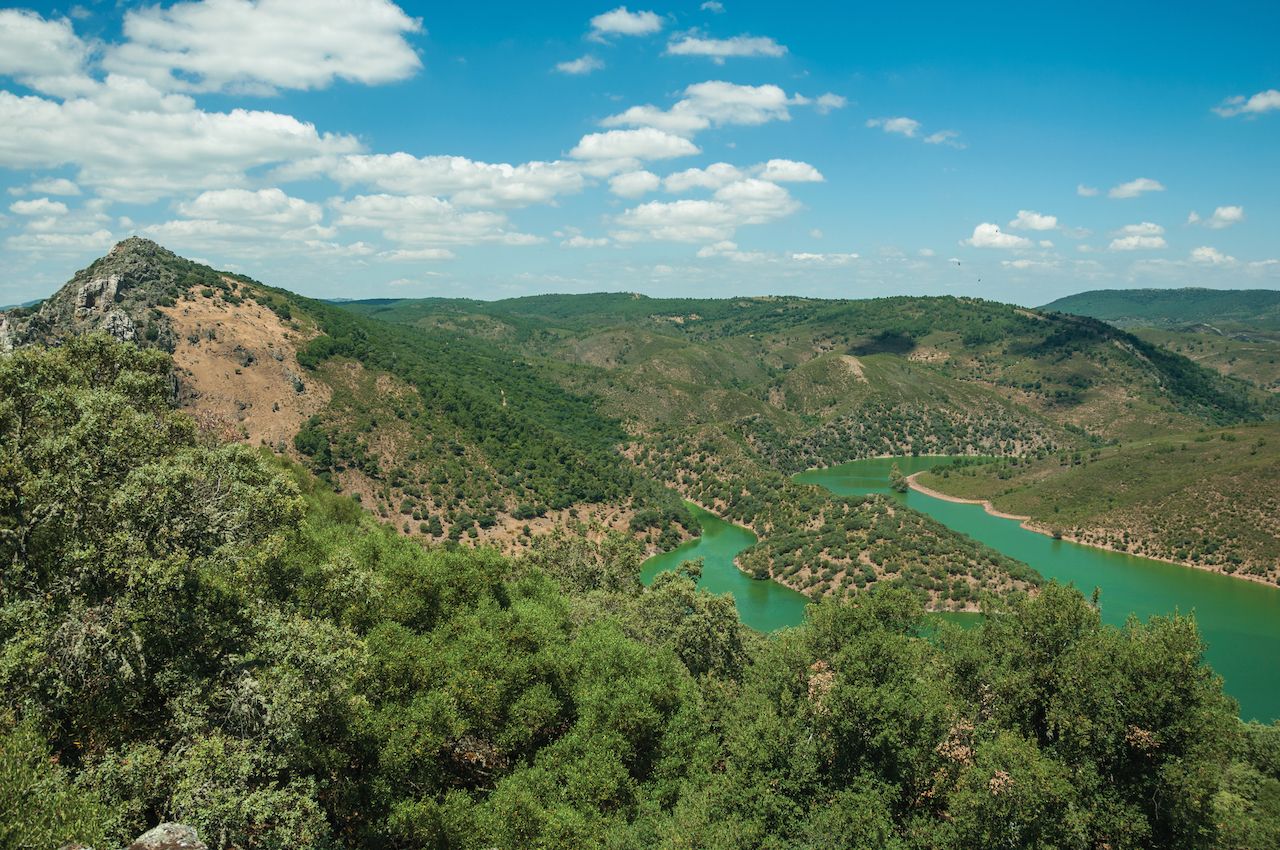 Out here past Talavera de la Reina, cities and towns no longer adhere to the banks of the deep greenish slash of water. After centuries of back-and-forth religious and cultural fighting, towns are prudently set back far enough away from the flowing border. The further west you go, the larger the skies seem to get. Storks, eagles, and vultures patrol the sky, making this expanding blue ceiling their own. Underneath, fabled fighting bulls and acorn-scavenging black pigs shape and mold the scrubby sunburnt landscape. Large scale hunting preserves spread out beyond sight from the highway, fencing in the deer that attract hunting parties from around the world. This is one of the last large-scale, wild corners left in Europe.

Wide open as these spaces are, birds and beasts are not the only ones that call this region home. Continue west and dip past the Sierra de San Pedro and between the cork oak tree groves that spread out in each direction, and white specks of Portuguese villages come into view, proof that people have also left their mark on this land.

First stop is a small Spanish village set where the Sever River meets the Tagus. Cedillo began as a Portuguese fishing village and its name traces its roots back to when it was ceded to the Spanish in one of the back-and-forth wars of history. Today it serves as the launching point for a different kind of water adventure from the crowded beaches that most people associate with Spain.

The village is now the departure point for El Balcón del Tajo, a riverboat that cruises the rivers of the Taejo International Park, also known as the Tagus Natural Park. Aboard you can get a closer look at some of those overhead vultures and enjoy some of the best birding on the continent. Get off and on and explore the nearby villages of Herrera de Alcántara, Santiago de Alcántara, Lentiscais, and Castelo Branco.

A castle overlooking everything 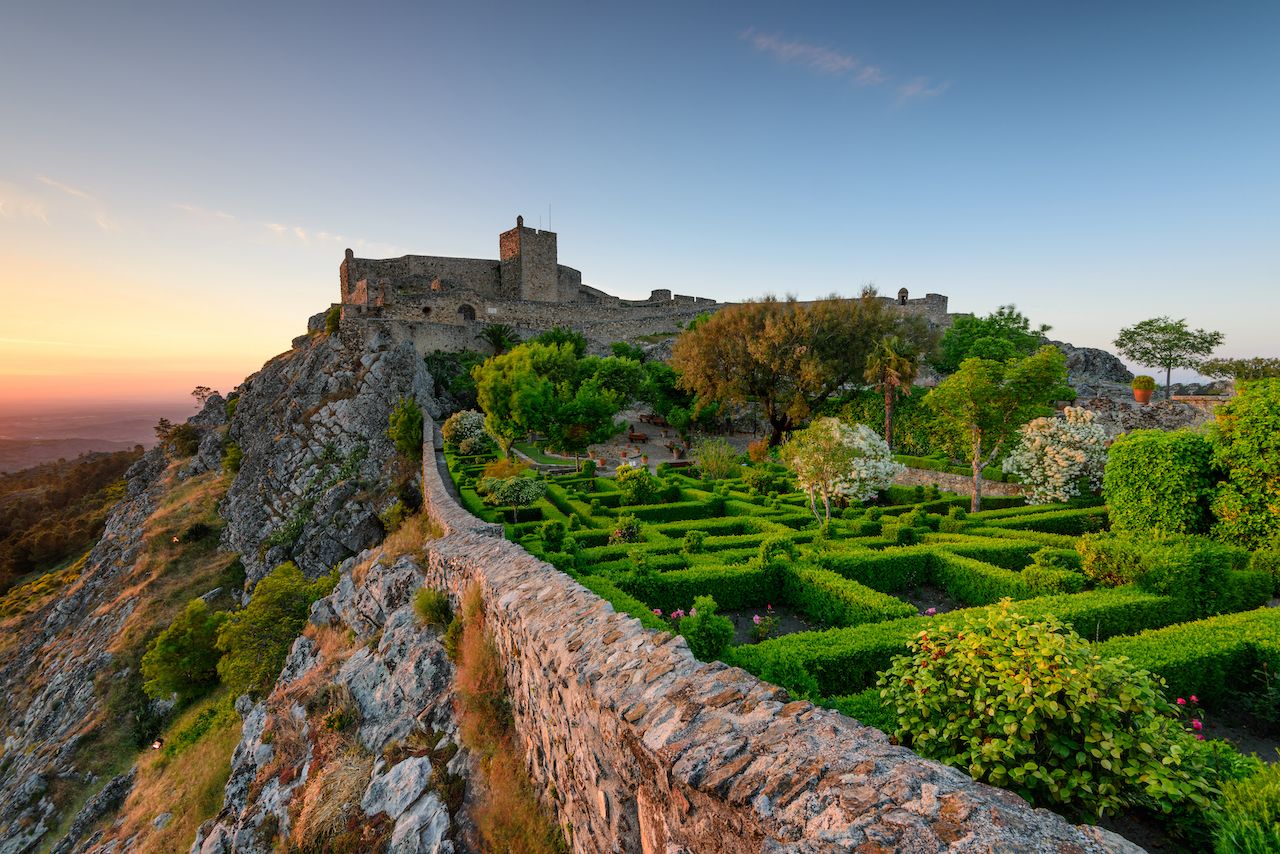 Heading west again as you pass through Valencia de Alcántara, leaving the last remaining Spanish villages behind, a jagged dorsal fin rises out of the surrounding green patches that cluster around courses of water that feed into the river. Like some sort of prehistoric Border Wall, this granite fence signals that the border is near — though, ever since the opening of borders with the EU, confused messages from your cell phone carrier are about the only other signal telling the traveler that they are in a grey area between countries.

In the hazy distance, the once impregnable mountaintop fortress of Marvão, Portugal, rises into view. Founded by the rebel Ibn Marwan in the times of the Caliphates, when the Iberian Peninsula was in Muslim hands, you’d be hard pressed to find a better spot to perch a castle. The narrow road up begins at a crossroads crowded with restaurants with some of the best split roast chicken available, then corkscrews round and round in dizzying turns until you rise up over 2,500 feet from the summer heat that can bake the land below. Whitewashed homes with tiny doors, in the Portuguese Alentejo style, line the narrow streets that lead to the impressive fortress at the top of the village. The castle itself can be seen from as far away as the town of Castelo de Vide several miles due west. From Marvão, you can see everywhere. 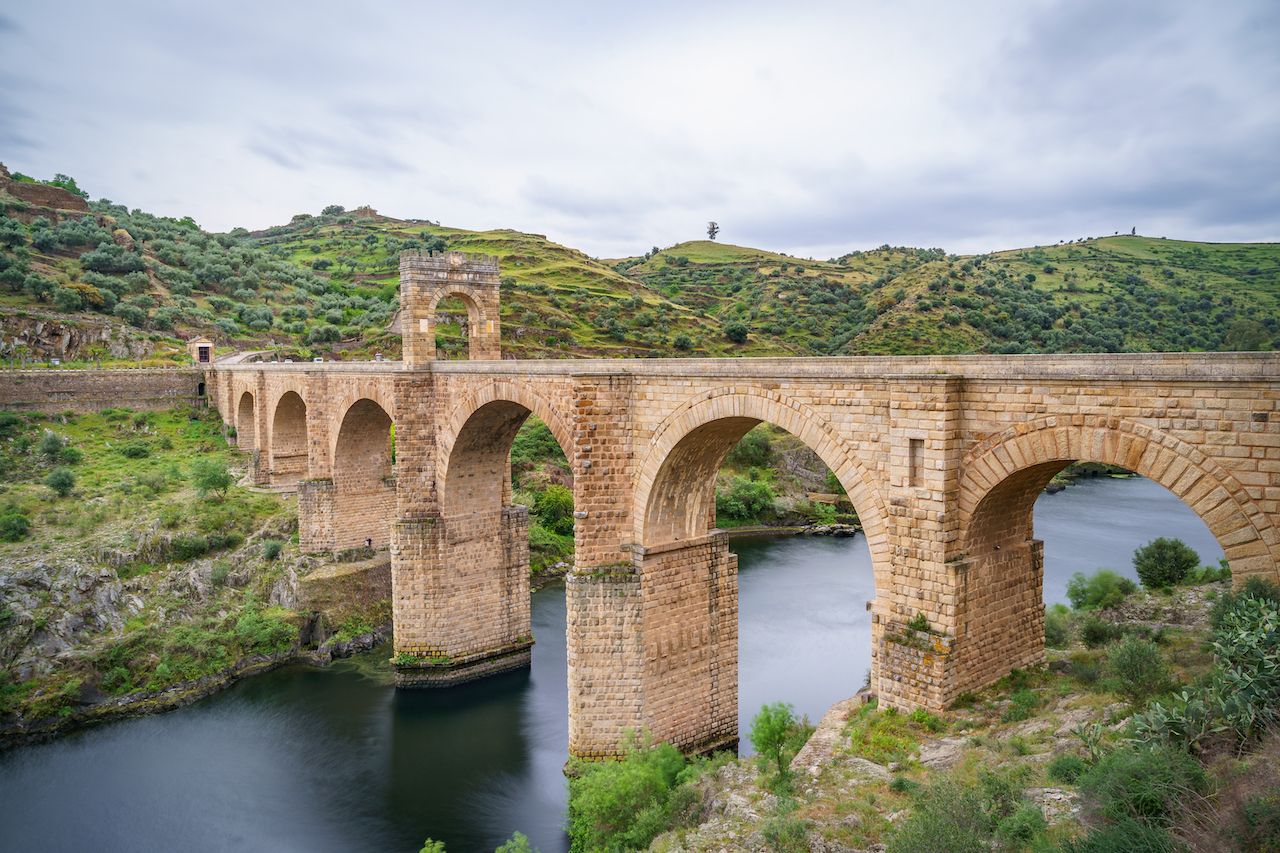 These backroads of Portugal seem like colorized movie sets in comparison with the six-lane highways that whisk you from point A to point B as fast as possible. If you go just enough out of your way en route to Castelo de Vide, you’ll find one of the most photogenic stretches of road in the country, the N261-1. Framed by towering whitewashed ash trees, this tiny strip of asphalt makes even the smallest European car seem wide. It’s a highway that proves that the journey is often more interesting than the destination itself.

From here you can either head on to the largest Portuguese city in the region, Castelo Branco, or double back towards Spain for another unique driving experience. Since the Romans were in charge, the Tagus has served as a natural border, one that separated but at the same time hindered the trade in silver from the north. A quick look at a map of the region and you’ll see the word alcántara several times. From the Arabic word al-kantarat, or bridge, it became a popular place name in the area — and yet they all stem from one particular crossing.

The town of Alcántara sits high above the Tagus, and as you move towards it, the deep valley looks impassable. Then, it appears. Spanning the 650-foot chasm cut by the Tagus, the 2,000-year-old Roman bridge connects each side like a temple on stilts. Romans, Visigoths, Moors, warring French and English troops, and the trailer trucks of today have all taken advantage of the only way to cross the river for more than 50 miles in each direction.

Another Roman bridge and the best bread 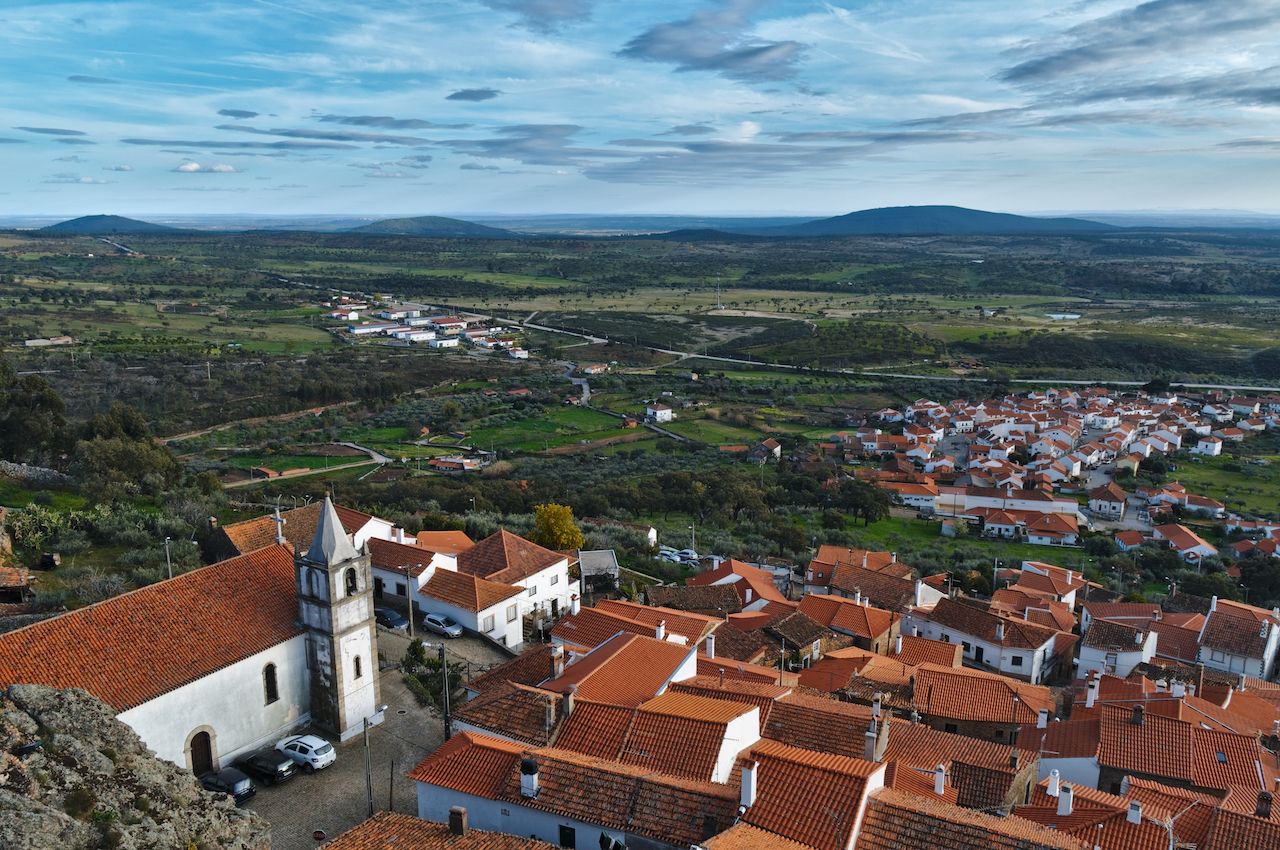 The road continues to wind north, paralleling the border until it meets the Erjas River, which here serves as the countries’ border, and yet another Roman bridge. This bridge, of more modest proportions, neatly frames the nearby hilltop town of Segura and crosses into Portugal once again.

Farther on, the tiny village of Penha Garcia smells like freshly baked bread. The local gastronomy on each side of the border is somewhat similar due to shared basic ingredients. If there is one thing that the Portuguese do better, though, it’s bread — and in this village you can find some of the best in the region.

As this area used to lie at the bottom of the sea, evolutionary twists have left here one of the richest deposits of fossils that can be found on the peninsula. That said, not even the most prehistoric marine creature looks as out of place as the American tank that is inexplicably parked in Penha Garcia’s main square.

Homes amongst the boulders 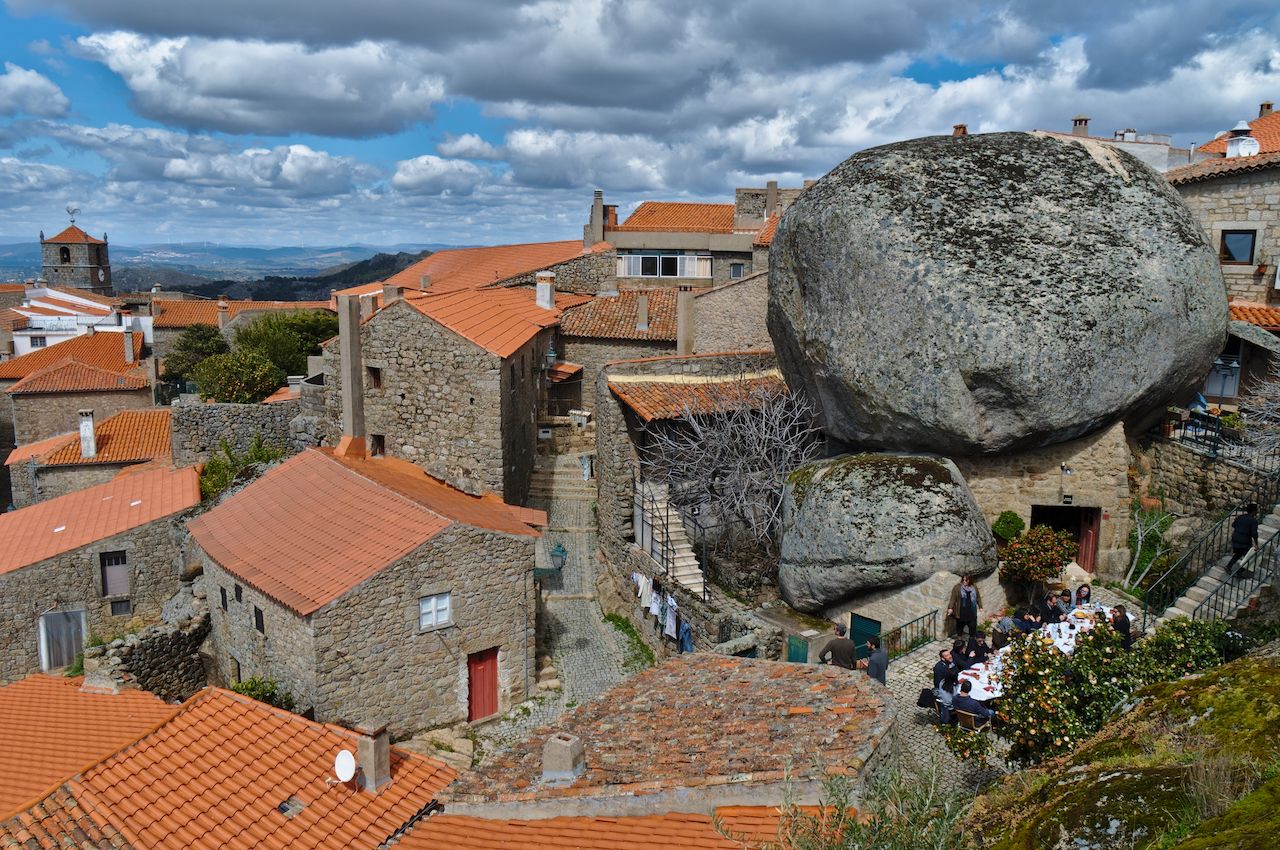 The higher you go in Portugal’s Beira province, the larger the stones seem to get. Pebbles become stones, which in turn become boulders, and in Monsanto they become homes. For millennia, people have been taking advantage of the wide arches between these enormous blocks of granite to build their homes among the nooks and crannies.

It’s been called the most Portuguese village in Portugal but here you won’t find the whitewashed walls or the windows with the yellow trim you find in other villages. Yet as the sun goes down and the summer heat abates, neighbors in low chairs sit out front of their doors under the cool shade of the granite monoliths and the cold rock becomes part of the people and their place.

There are places you travel through, but this monument in stone is a place you travel to. On a clear day, from the highest point of Monsanto’s castle, look south and imagine the outlines of Marvão and recall the words the great Portuguese writer, José Saramago, said when travelling in the region: “How wide is the world.”

CultureWhy Granada Is Our Favorite City in Spain
Tagged
Road Trips Trip Planning Spain Portugal
What did you think of this story?
Meh
Good
Awesome