An abundance of natural resources has flourished for thousands of years in the untamed oceans and forests of Alaska. Alaska’s Indigenous people were the first to find nourishment in plentiful runs of salmon and herds of caribou, and today these two animals remain iconic in Alaskan cuisine. Alongside those two favorites, there is even more to love in Alaskan waters and forests.

The seafood can’t be overlooked: There are giant crabs stalking the ocean floor and oysters drinking in ice-cold, glacier-fed waters. One can also look to the trees for nourishment in the form of spruce tips and birch syrup. There are bunches of purple, red, and orange berries hanging from shrubs and trees, the key ingredient in Alaska’s famous berry cobblers. If you’re a forger, a hunter, a fisher-person, farmer, or gardener — or basically anyone who likes their food wild and fresh — Alaska is a wonderland of nutritious flavorful ingredients, oftentimes available right in your backyard.

“More than any other place I’ve ever visited, Alaska is a place where people expect to be able to live off the land, and that’s an idea that’s deeply ingrained in the culture,” Mark Adams, author of Tip of the Iceberg: My 3,000-Mile Journey Around Wild Alaska, the Last Great American Frontier, tells me. “Whether it’s caribou, halibut, moose, salmon, spruce tips, wild blueberries (or salmonberries), or even eclectic native favorites like fermented walrus, food gathering is a part of the rhythm of the seasons no matter your day job. If you’re a chef, using that cornucopia of fresh ingredients from outside your back door is a no brainer.”

Here are 10 must-try foods to try from Alaska that reflect the bounty of this stunning wilderness. 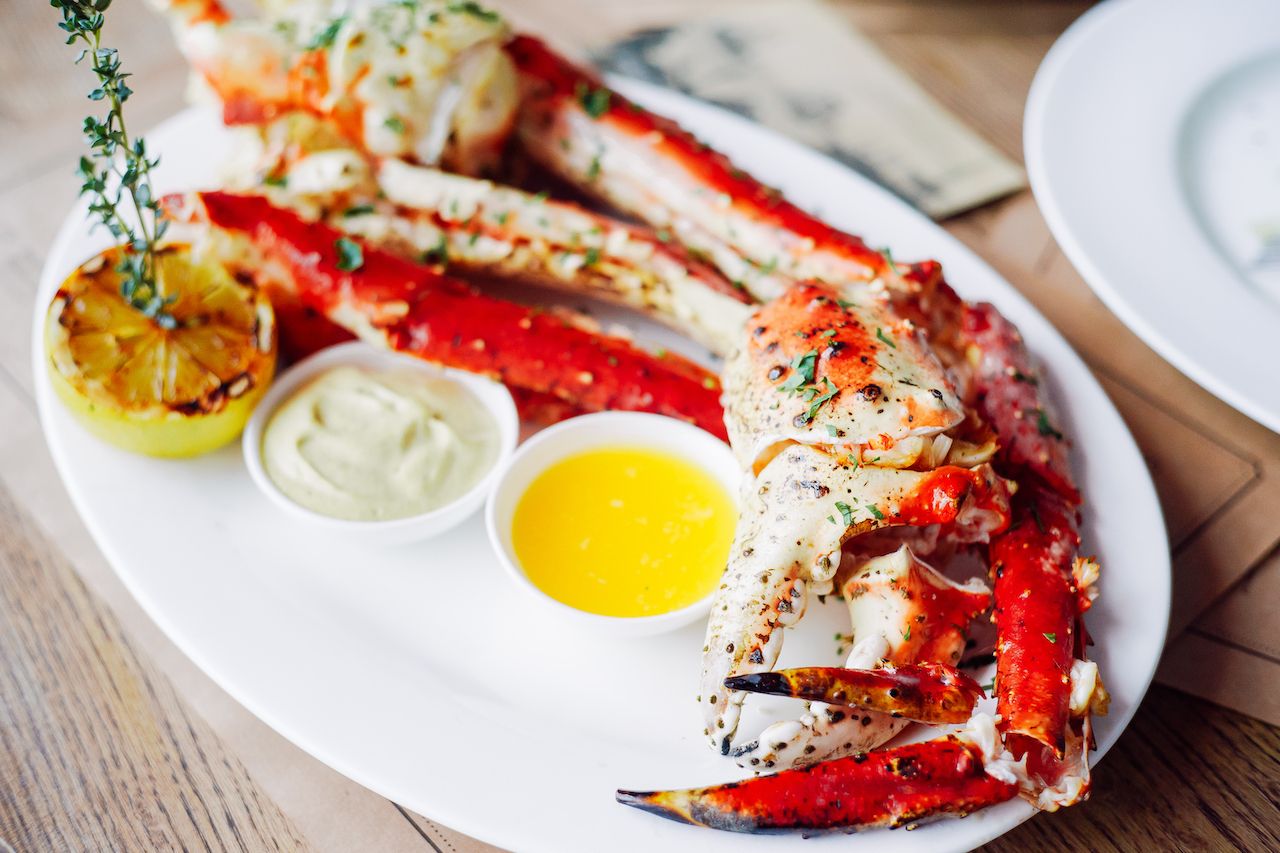 Alaskan king crab is legendary. Yes, the fishermen who brave dangerous waters to bag these seabound creatures become famous on Deadliest Catch, but the crabs themselves are equally noteworthy: The pristine frigid waters off the coasts of Alaska produce some of the largest, meatiest crabs on the planet. The meat itself is sweet and soft. As a bonus, Alaskan crabs are always wild-caught, making it a sustainable choice for dinner.

Oysters thrive in the glacier-fed waters along Alaska’s coastlines in places like Kachemak Bay and Ketchikan, Alaska, home of Hump Island Oysters. These oysters have an exceptionally briny flavor, with hints of cucumber, melon, and minerals. Alaskan oysters are also known for being particularly plump and are among the safest oysters in the country to eat because they live in continually cold waters and eat a constant diet of plankton. 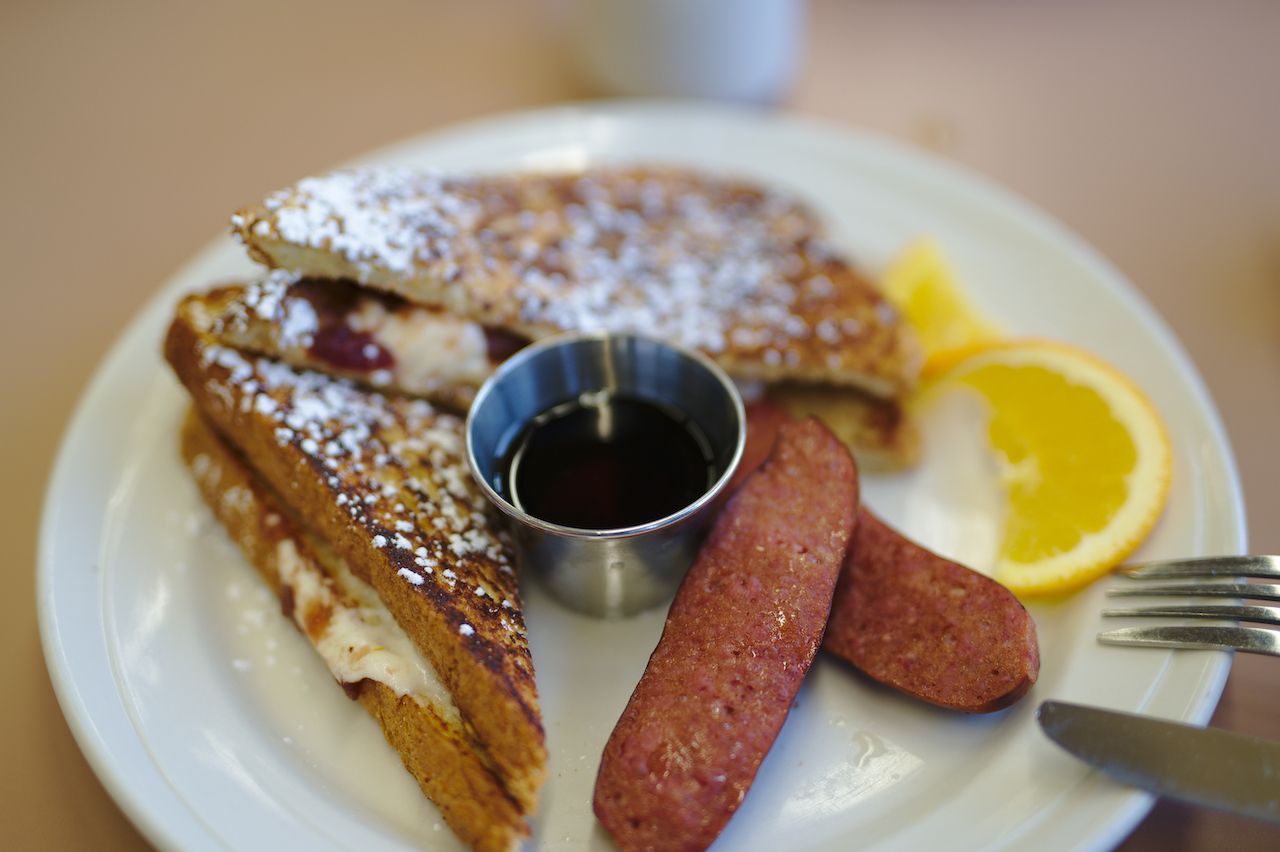 Offered on breakfast platters and as a pizza topping, reindeer sausage is a true Alaskan specialty. Though it’s called reindeer sausage, it should be correctly identified as caribou sausage, as that’s how Rudolph’s brethren are known in Alaska. It’s not 100 percent caribou either but a combination of caribou, pork, and beef. Perhaps its most iconic iteration is in the form of a reindeer dog, which Atlas Obscura reports was a popular street food snack in Anchorage before the main purveyor of the hot dogs died in 2016.

We can give thanks, at least in part, to Alaska for popularizing sourdough bread in America (though it originated in Egypt). Sourdough came to prominence during the Klondike Gold Rush, when, according to food writer and author of I Hear America Cooking Betty Fussell, prospectors to the Yukon carried portable sourdough with them to the Yukon as a leavening alternative before baking soda was widely available. They were likely inspired by French and Italian immigrants who brought their baking techniques to the port cities of Seattle and San Francisco.

For NPR, Sharon Veil writes that Alaskan miners were so attached to their sourdough that they “supposedly slept with their beloved starters to keep them from freezing in the north country’s frigid climate.” This type of bread was so ubiquitous in Alaska during this period that sourdough eventually became a nickname for a prospector that managed to survive an entire Alaskan winter without turning back for home.

You can bake or buy sourdough anywhere in America today, but it’s worth paying tribute to its rich history in Alaska by trying sourdough pancakes while you’re there. 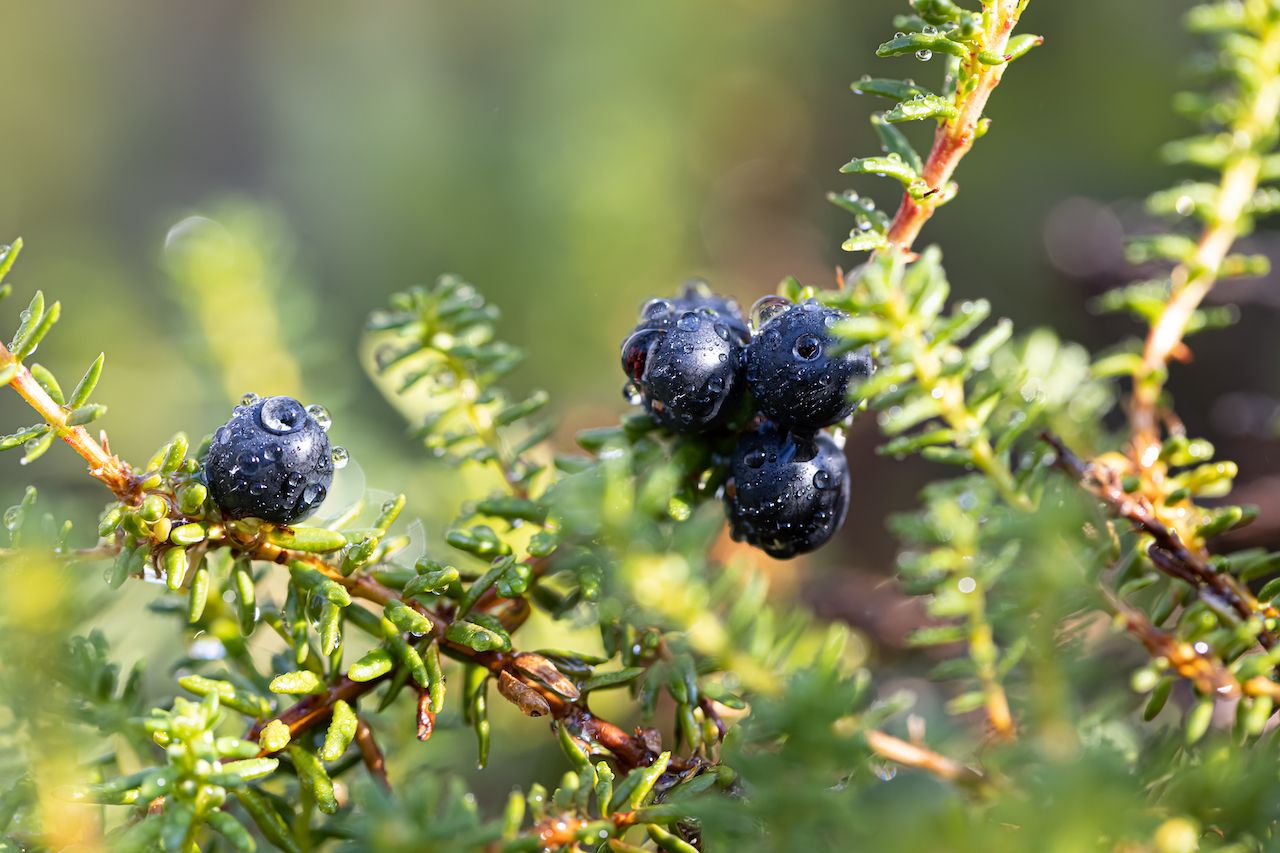 The berries of Alaska are abundant and diverse: There are the more well-known varieties like blueberries, raspberries, and currants, but you’ll also find deep red lingonberries, orange salmonberries, and almost-black crowberries — which are famously blended into akutuq, an indigenous Alaskan ice cream made from caribou fat. Outdoor adventurers are likely to encounter them everywhere: Wild berries grow along the roadsides, near hiking trails, and in back yards all over the state.

Perhaps part of what makes berries so prized in Alaska is that they’re so versatile. Berries can be frozen, eaten fresh, preserved, added to baked goods like pies, cobblers, and muffins, or transformed into fruit leather, jam, jelly, or syrup. During long, difficult Alaskan winters, foods with a long shelf life and a variety of uses are a blessing.

This traditional subsistence food of the Inuit people is a chunk or cube consisting of one layer of dark whale skin and another layer of thick white blubber. Harvested from either the bowhead, beluga, or narwhal, muktuk is traditionally eaten raw. However, it is sometimes breaded, fried, and served with soy sauce. The flavor is sometimes compared to fresh coconut or fried eggs. 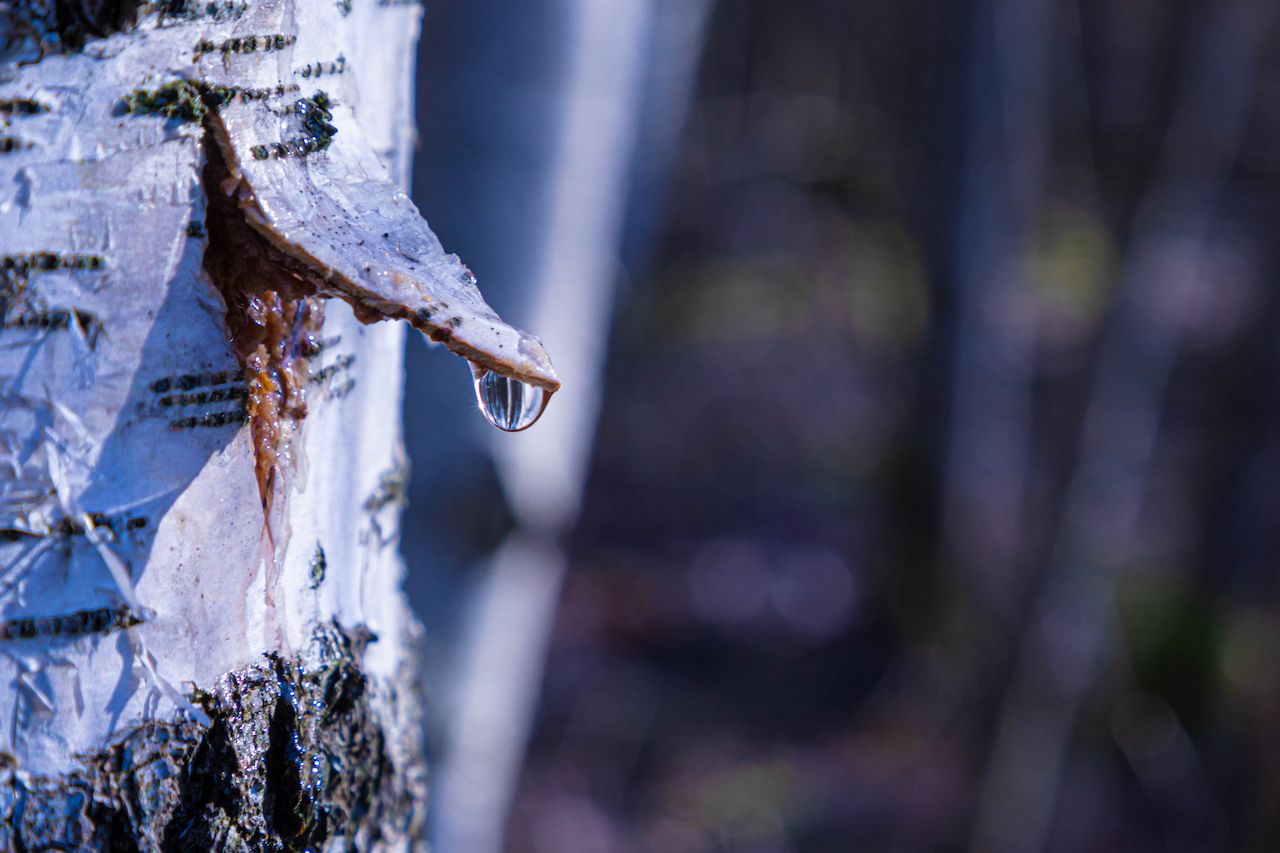 The most famous syrup in the country might come from Vermont’s maples, but the birch syrup harvested in Alaska shouldn’t be overlooked. The syrup is harvested during Alaska’s chilly spring season from wild growing trees in places like Talkeetna, Alaska, where Kahiltna Birchworks runs a birch syrup production facility. The flavor of birch syrup is sometimes compared to molasses — reminiscent of caramel with a hint of spice.

8. All kinds of salmon

Beloved by Alaskan bears and people alike, salmon is famously high quality and ranks among the healthiest fish in the world.

There are five types of Alaskan salmon: sockeye, chum, coho, chinook, and pink. Alaskan salmon is wild-caught, a fishing practice considered by some to be more sustainable than aquaculture. Wild salmon is leaner, its meat is a darker and richer orange hue, and it’s dense in the nutrients that fish are famous for. Alaska is far and away the leading purveyor of these supreme fish — the Seattle Times reports that around 90 percent of all wild salmon come from Alaska.

Though most of the salmon Americans eat is farmed and imported, we should go out of our way to support Alaskan fisheries. The state’s salmon fishermen are held to rigorous sustainability standards that safeguard wild salmon runs from overfishing. 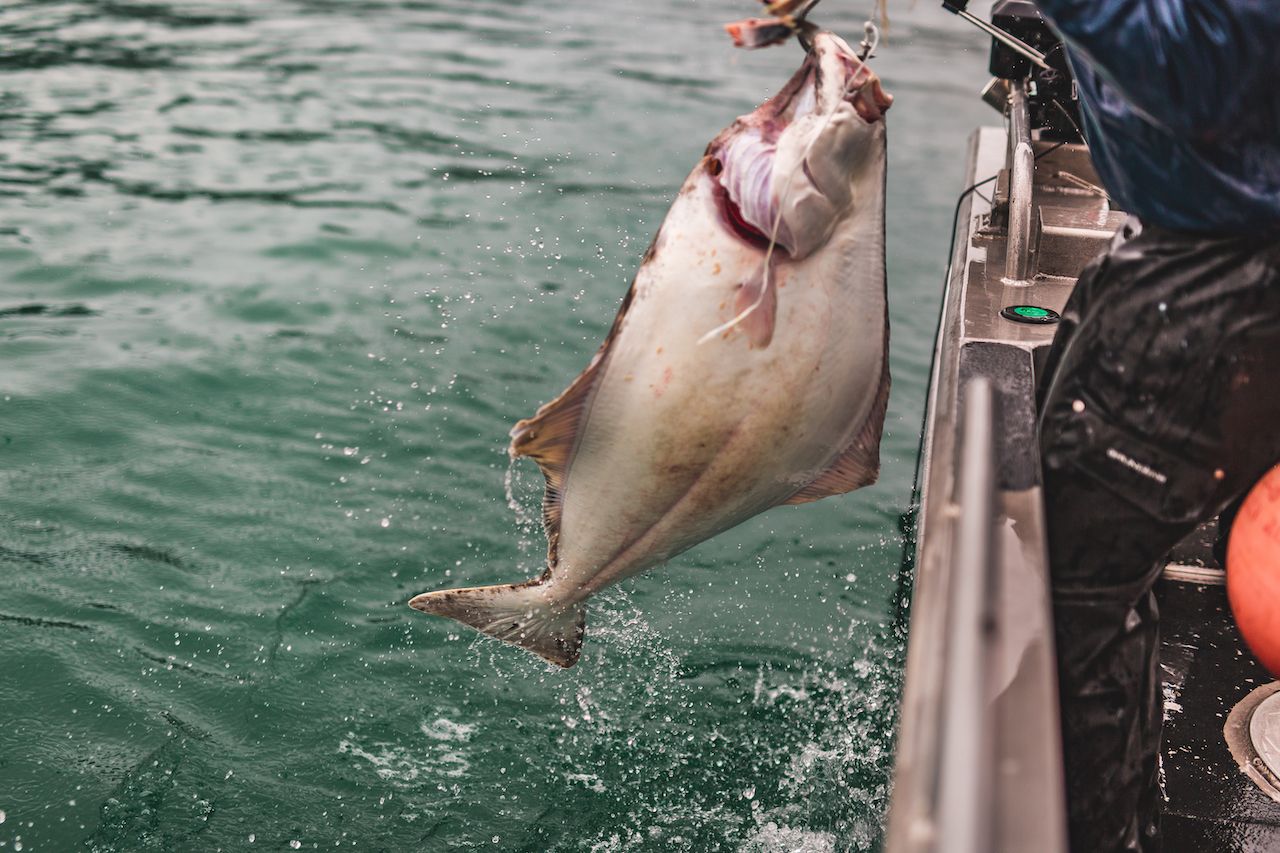 NOAA Fisheries describes Alaskan halibut simply: “remarkable.” These fish grow to be larger than most other halibut in other parts of the world. Sometimes nicknamed “barn doors,” Alaskan halibut can weigh as much as 500 pounds. Wild-caught Alaskan halibut is often caught using the longlining method, which results in very little bycatch, which might be reassuring for the sustainability-minded diner. Halibut is a white fish, mild in flavor, lean, and protein-packed.

Spruce tips are exactly what they sound like: those prickly electric green needles that grow on the very tip of spruce tree branches — and yes they are edible. The Alaskan Indigenous Tlingit people were the first to brew a tea with spruce tips, and Captain James Cook brewed spruce tip beer which he claimed could ward off scurvy — a practice which is still done today.

According to Edible Alaska, the flavor of spruce tips can be described as “herbal, fruity, citrus, resinous.” They have a wide variety of culinary applications too, adding an earthy twist to salt, jam, and syrup. The BBC reports that there is still a thriving economy based around harvesting spruce tips in Alaska, in which the wild needles are foraged and then sold to be transformed into even more products, including honey, lotion, soap, and, of course, lager.

Food + DrinkAlaskans Eat Roadkill for All the Right Reasons
Tagged
Food + Drink Alaska, United States
What did you think of this story?
Meh
Good
Awesome