American’s perception of ramen has come a long way since being viewed as the dietary staple of college students, artists, and everyone else who’s ever had to return Christmas presents to pay rent. Today, Asian noodle dishes from Chinese hot pots to Japanese ramen are foodie favorites. Late-night noodle shops are springing up all over the country and inspiring countless slurp shots on Instagram and gimmicks like glow-in-the-dark ramen from restaurants trying to attract said Instagrammers.

While we do have some truly great ramen and noodle shops in the US, the most common type of pan-Asian noodles people see stateside still comes dehydrated in little plastic packages. You know the ones. But even in this format, the authentic stuff can be acquired — if you know where to look.

A site called Yamibuy, which is kind of like the Amazon of Asian products, you can order hundreds of different Chinese, Japanese, and Taiwanese noodles in packages that lack a single letter of English. It’s a taste of the other side of the world, only conveniently shipped to your door and made in minutes. Not all are destined to be your new favorite flavor, though. No matter what, this is still mass-produced instant ramen, nothing like the delicious, complex, steaming bowls of fresh ramen you can and should try abroad.

To help you decide which of these noodles are like a sensory trip to another country, and to intake enough sodium to generally piss off my cardiologist, I tried and ranked a dozen of the most popular Asian noodles you can have shipped to America. Now granted, my tastes lean towards spicy food and vegetable flavors, and I’ve been known to spit out anything that tastes “too fishy,” including actual pieces of fish. But with an open mind and a forcefully broadened palate, I gave them all a shot, so you know which flavors you’re missing out on — and which aren’t worth the shipping costs. 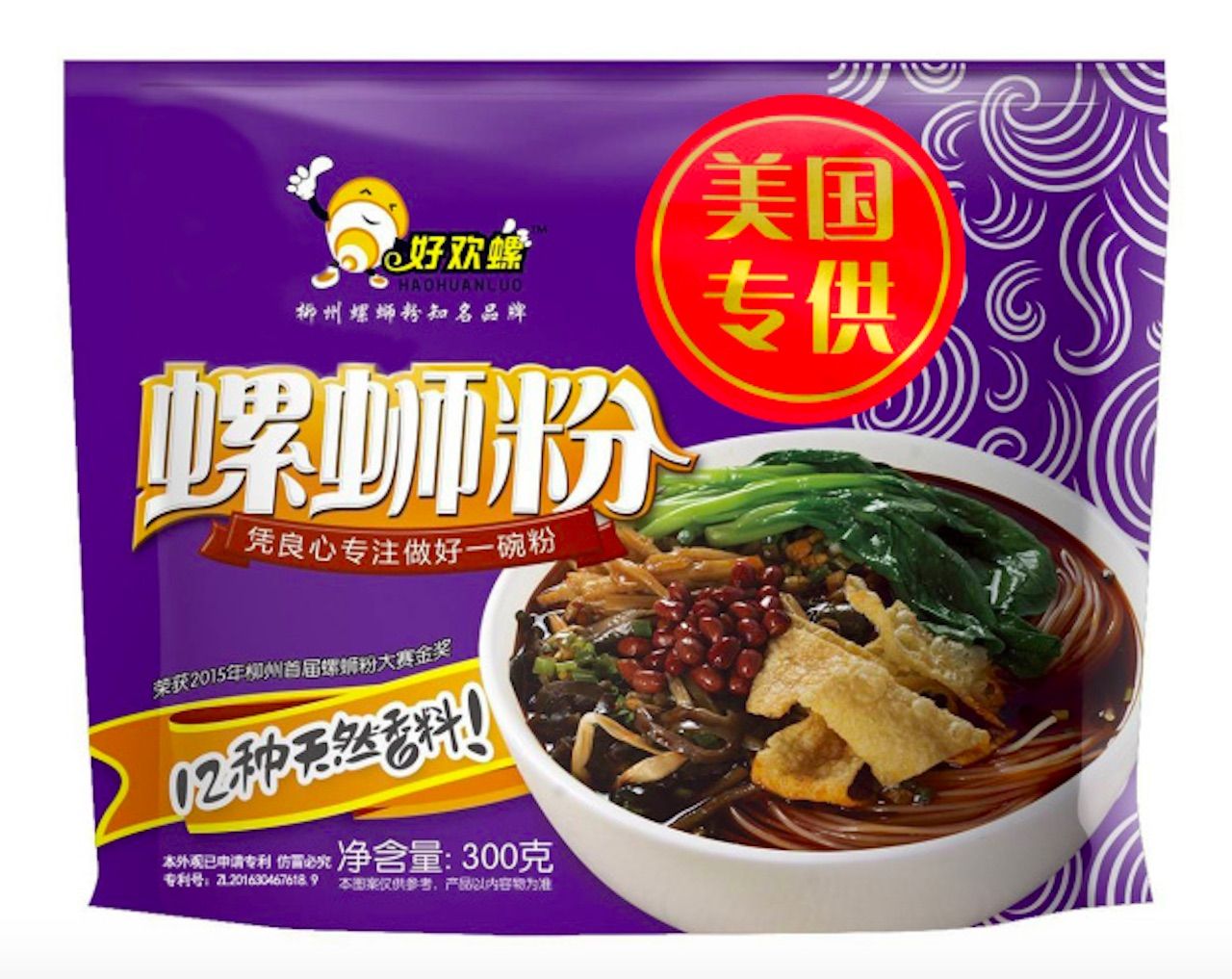 Six different packets of sauce and flavoring fall out when you open up this bright purple package, including mushrooms, bamboo shoots, and some indiscernible brown liquids. The second sentence of the cooking directions clear things up a little with the instructions to “Drain noodles, then boil water for snail soup.” Like it was telling you to add a pinch of oregano. Turns out one of those brown liquids is indeed snail soup.

Putting in this much work for instant noodles seems a little like hand-waxing an ’82 Corolla, but I had hopes that the end result would pay off. It did not. Though I can’t say the Chinese soup tasted snaily, the flavor wasn’t much to speak of — hot water, chili oil, and noodles that verged on slimy.

Try it for yourself: HAOHUANLUO Instant Spicy Rice Noodle 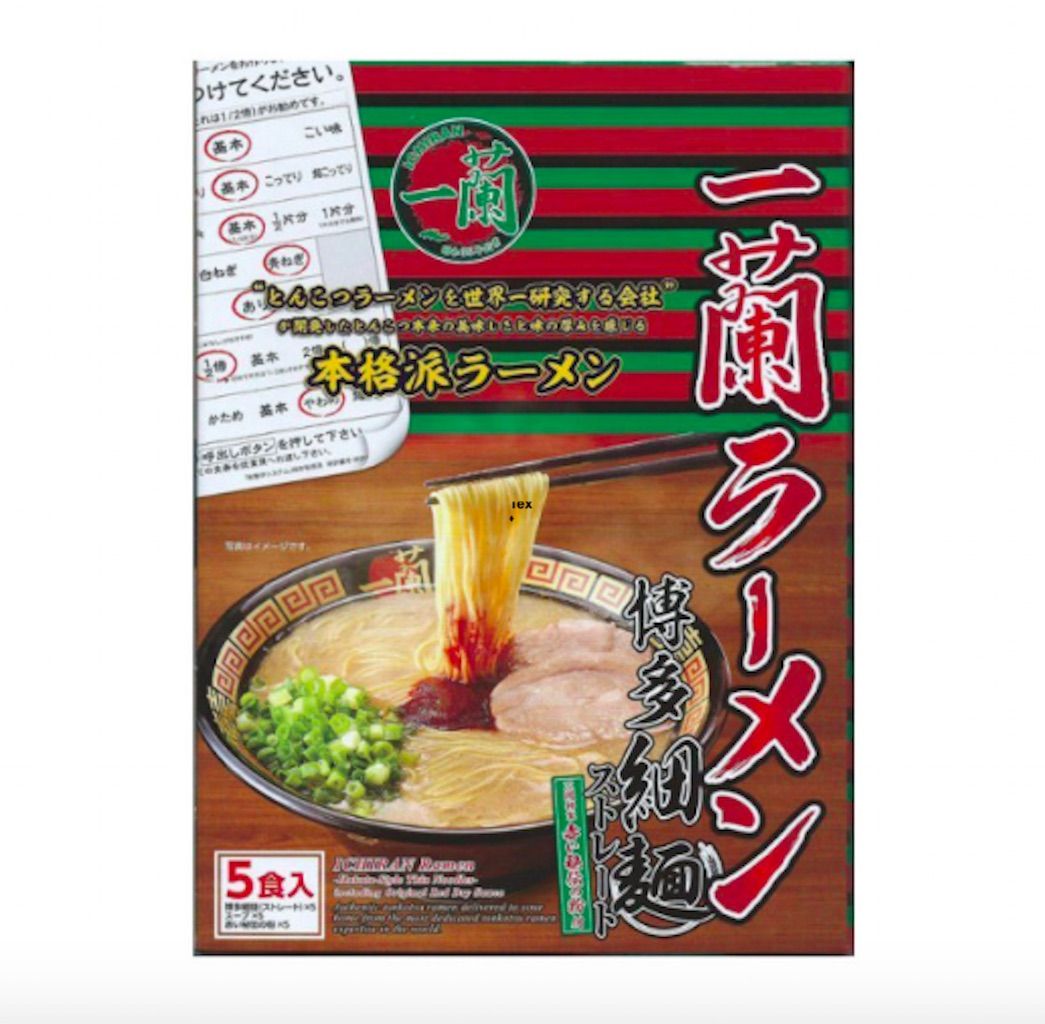 Saying you overpay for this famous Japanese restaurant’s instant noodles would be like saying the Phillies slightly overpaid for Bryce Harper. It’s been called some of the best ramen in Japan, and maybe it’s good at the original restaurant. The at-home version, however, is long on fat and onions, an aroma a little reminiscent of a White Castle hamburger if you turned it into a soup.

Try it for yourself: FUKUOKA ICHIRAN Ramen 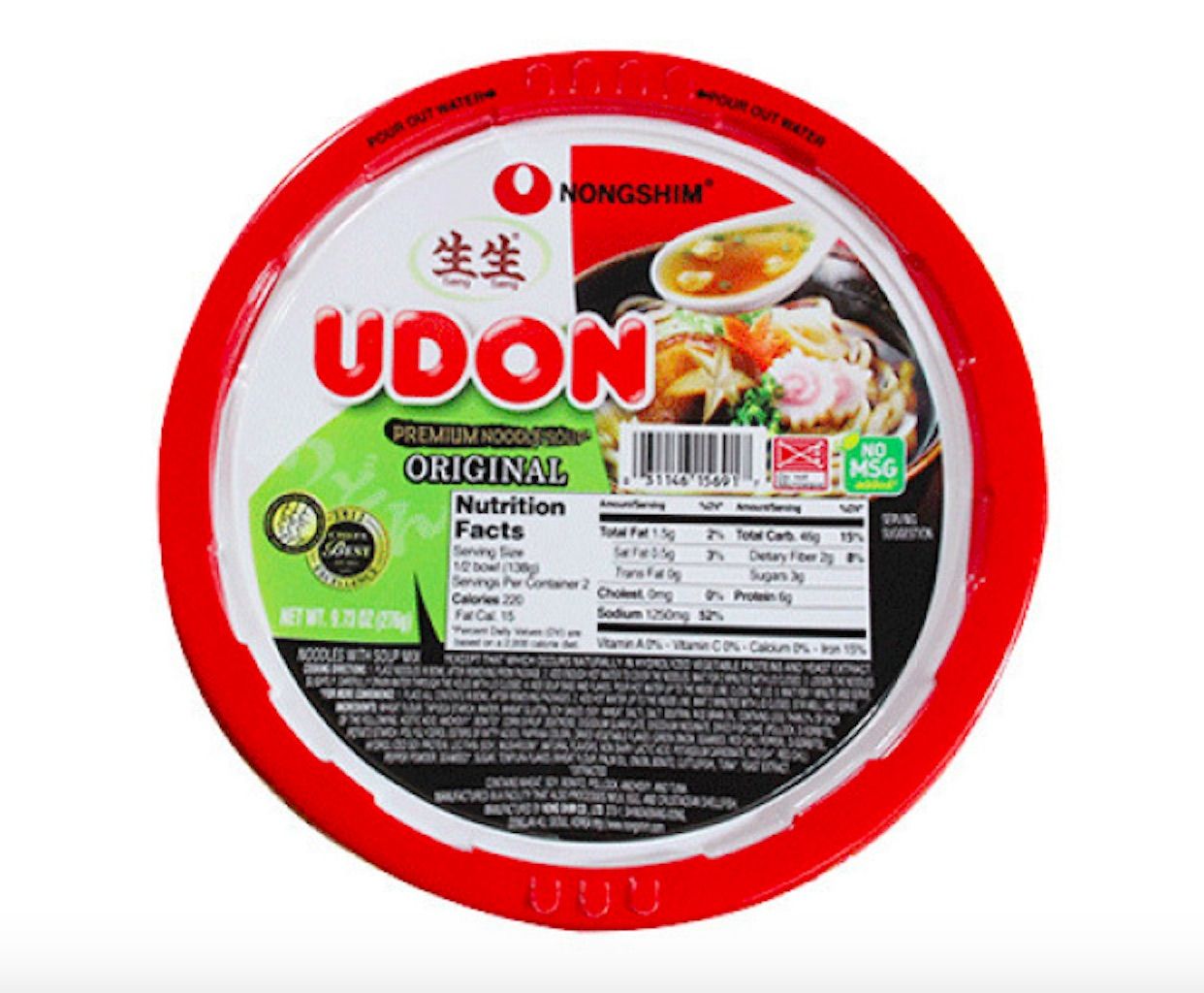 The name is highly misleading as there’s no mention of seafood in the title. But a quick perusal of the ingredients shows tuna, cuttlefish, anchovies, and all kinds of other stuff that gives it a distinctly fishy flavor. The smell when the boiling water hits the noodles and seasoning reflects that. If you’re the kind of person who moves as quickly past the seafood counter at the supermarket as possible, this stuff is not for you.

The noodles are actually pretty solid, with a watery broth that’s thankfully not nearly as strong as the smell. 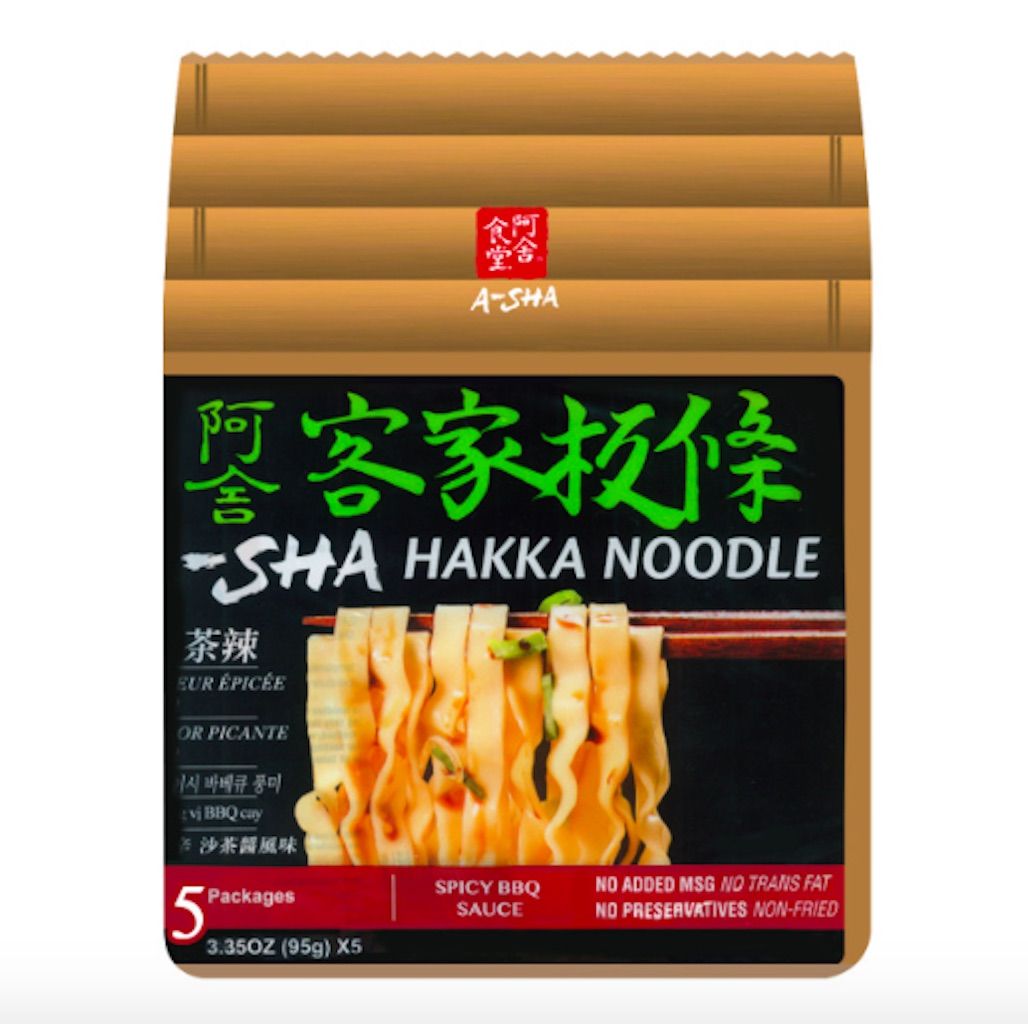 A big thanks to these beautifully packaged Taiwanese Hakka noodles for the four-step cooking process that doesn’t require much more than boiling water and pouring it on the noodles. Once the water hits the noodles, however, those thanks melt away a little. It smells slightly of ginger, but the flavor doesn’t do much. I got notes of PVC pipe, but it mostly tastes like generic ramen noodles. Not great, not bad. It’s like a first date you can’t complain about, but you probably won’t call again.

Try it for yourself: A-SHA Hakka Noodle 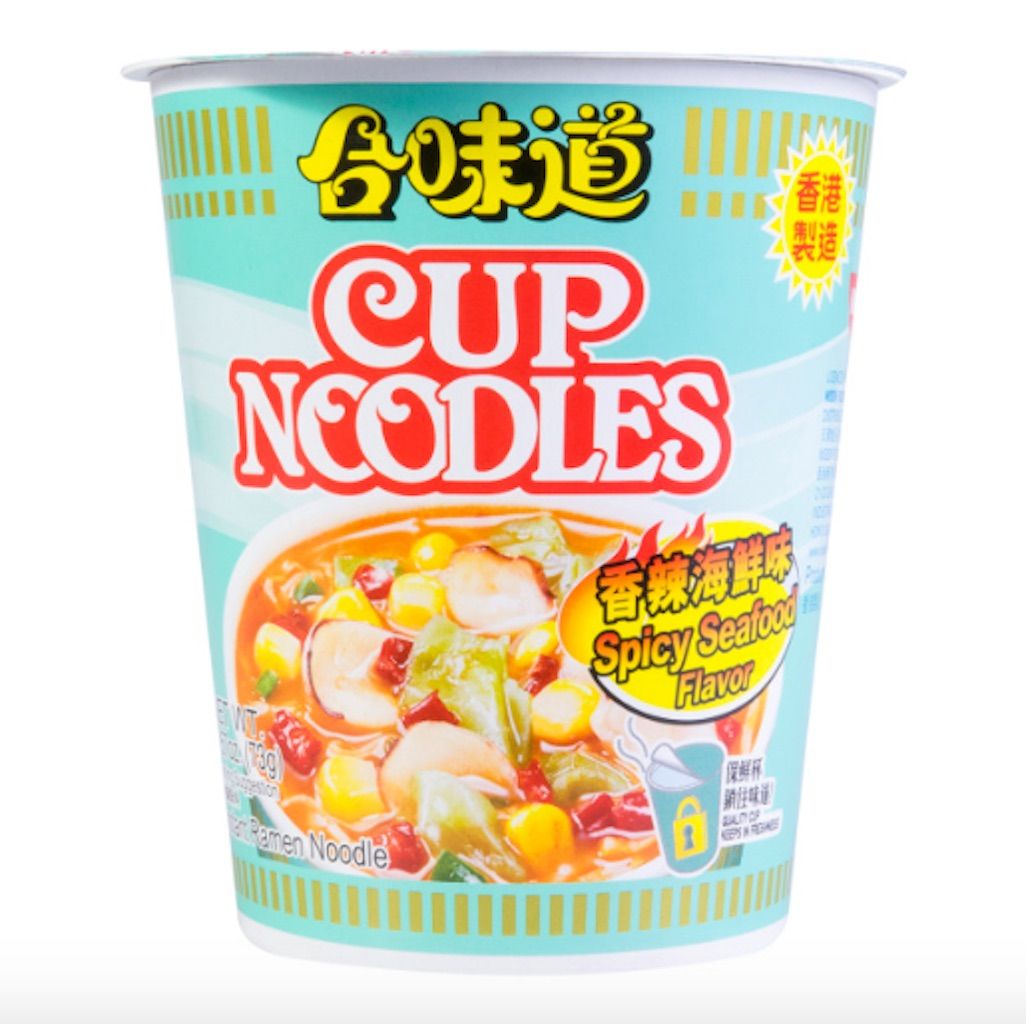 Nissin is a Japanese brand that many Americans can find at their local supermarket. This spicy seafood flavor is a big cut above the typical 27-cent, shrimp-flavored pack on aisle 12, though, with corn and other vegetables complementing a strong seafood flavor that’s toned down in US versions. 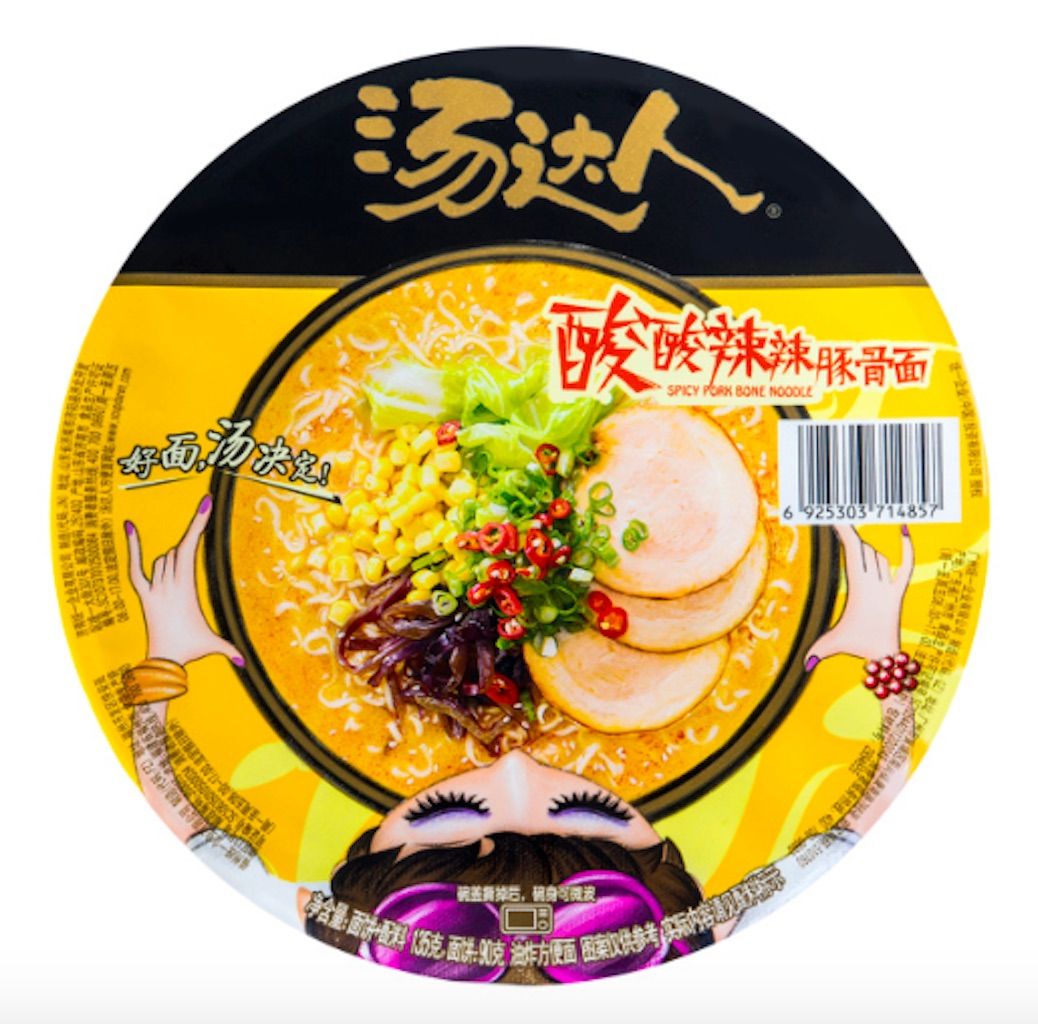 Get the right combination of veggies on a spoon of this Taiwanese cup and you’ll be whisked back to the Chuck E. Cheese of your childhood, where the mix of processed cheese, mild pork, and dehydrated mushrooms makes you long for giant animatronic singing mice. This bowl of noodles has a complex flavor of meat and vegetables, and the construction is pretty easy: Simply dump a packet of what looks like chili sauce and some meat-based oil on top of the noodles before adding boiling water.

You’ll get a hearty whiff of cheese when removing the lid though the ingredients don’t list it unless “spice” is code for “powdered Velvetta.” Still, it’s hard to shake the pizza connection. This has more kick and more flavor than many on this list and is worth trying if your usual lunch is a frozen pizza. 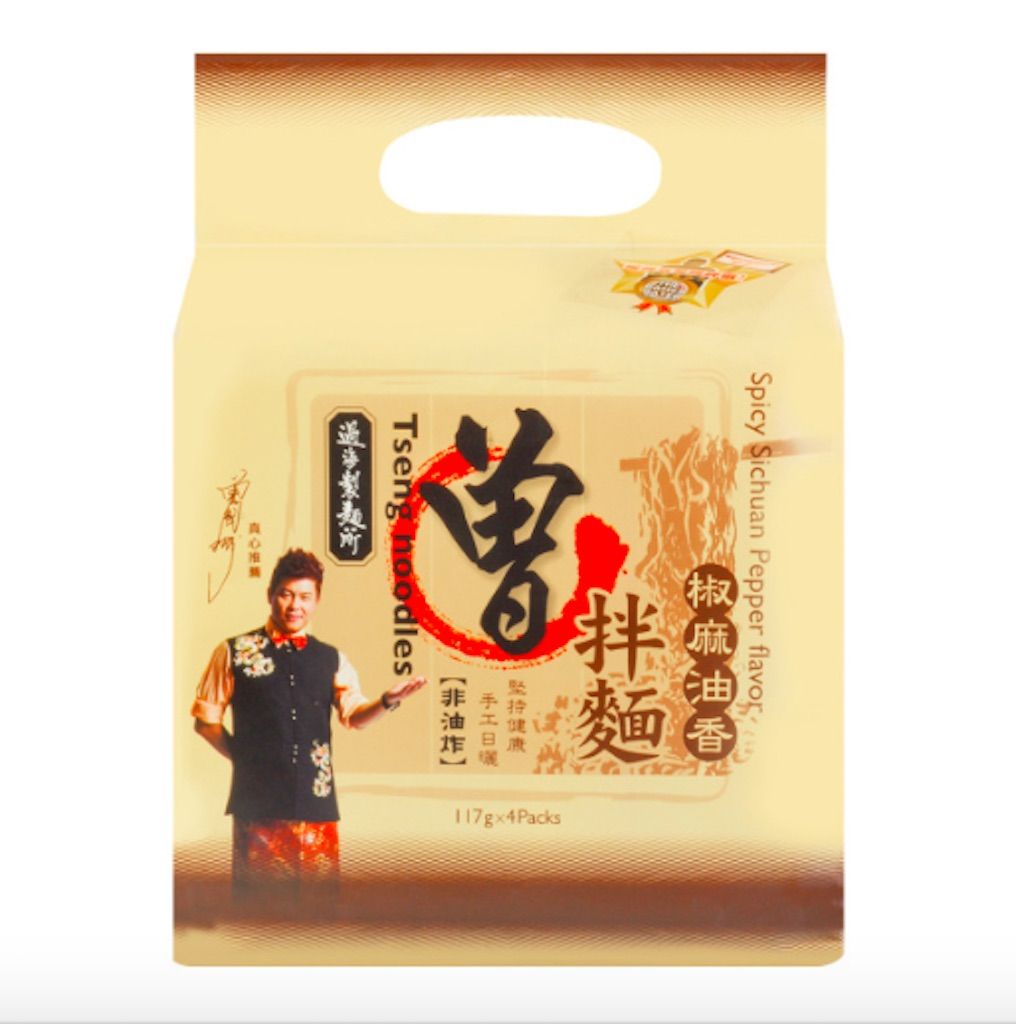 Aside from the overwhelming chemical scent upon opening the package, these Taiwanese pepper noodles are actually pretty good. They’ve got a sharp, spicy flavor with just a hint of grease. That said, it leaves a thick, oily layer of grease in your mouth that you don’t realize is there until you’re done eating.

Try it for yourself: TSENG Sichuan Pepper Spicy Noodle 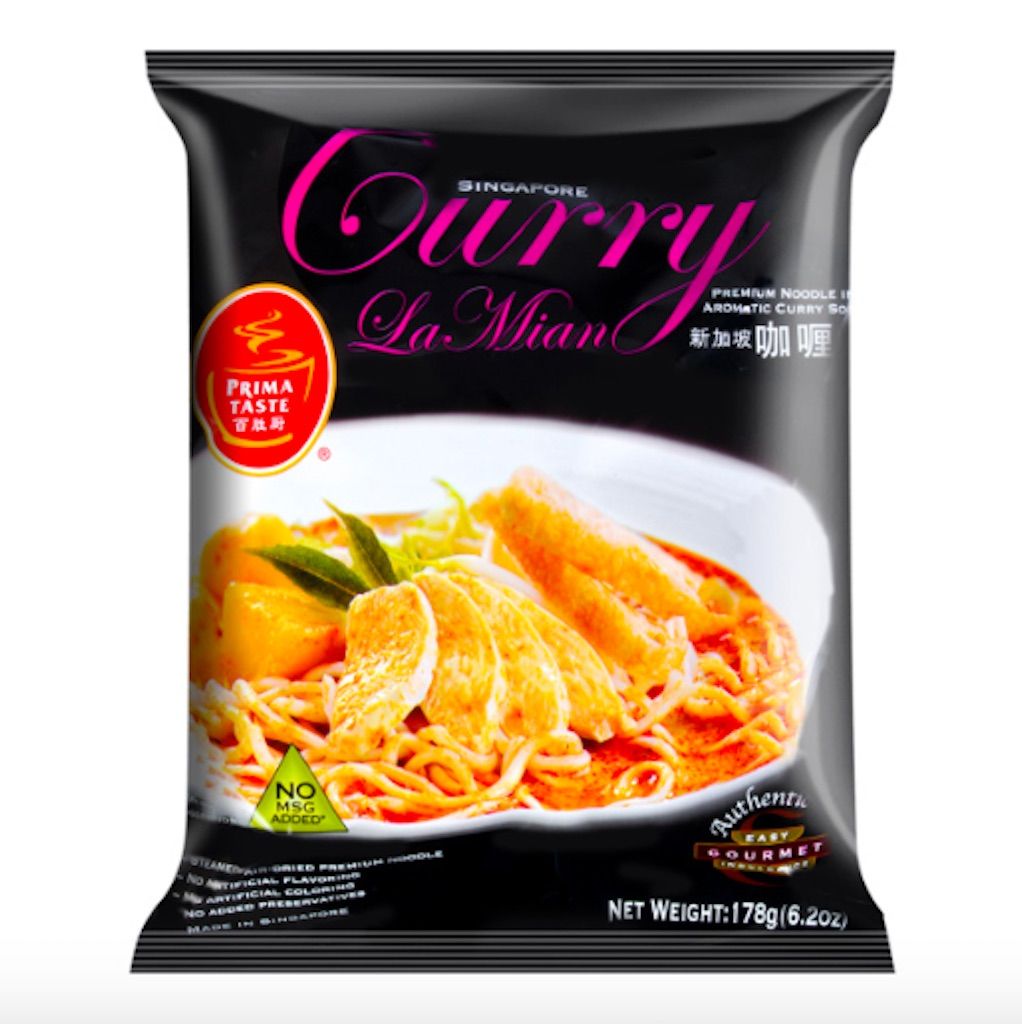 Saying instant noodles could use more salt is kinda like saying Post Malone could use some more face tats, but this inoffensive curry might be the lone instant noodle that’s a little lacking in sodium. Sure, technically there’s 1.8 grams — or about 80 percent of your daily allowance — of sodium in one package. But you won’t really taste it past the soft overlay of curry.

While it doesn’t have the strongest flavor, Prima’s noodles are, in fact, prime on the list. They’re the freshest-tasting instant noodles you’ll ever have, with just enough texture to make you chew but not so much they taste al dente. I may have even tried a few before putting them in water, which was surprisingly addictive.

Try it for yourself: PRIMA TASTE Singapore Curry La Mian 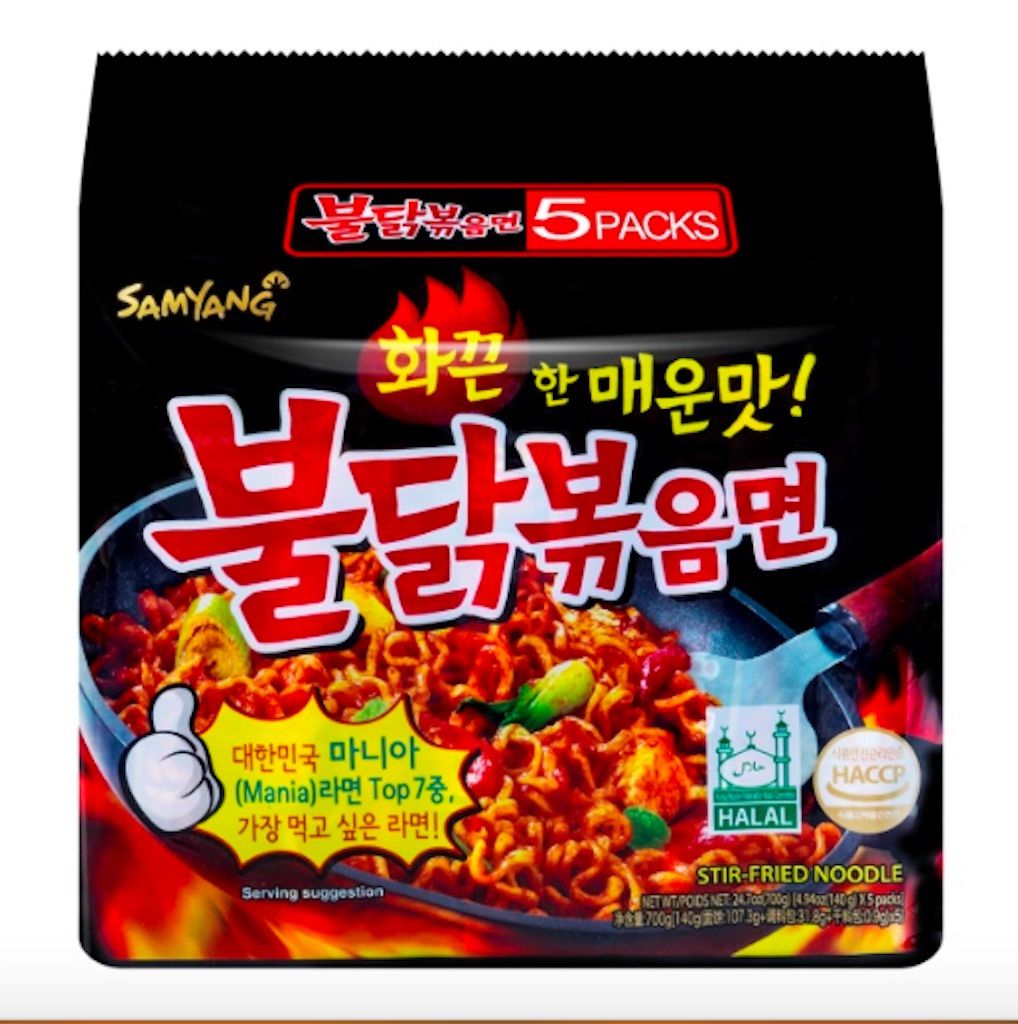 The package looks a little like a warning label for battery acid. Thick red letters on black plastic just scream dangerously spicy, and emptying the sauce packet of deep-red paste onto the noodles doesn’t do much to make you feel better.

But if you’re into spicy food, these will be your favorite noodles ever. Mix only eight tablespoons of water with the noodles and paste, and you’ll get a mouth-watering, fiery noodle bowl with just enough spice to make it hurt but not so much it’s all you taste. It’s the classic spicy dish where the first bite makes you say, “This ain’t so bad,” but by the end of the bowl you’re literally taking your clothes off and stuffing your mouth with ice cubes. If you’re a-ok with unnatural spikes in body temperature, itadakimasu! 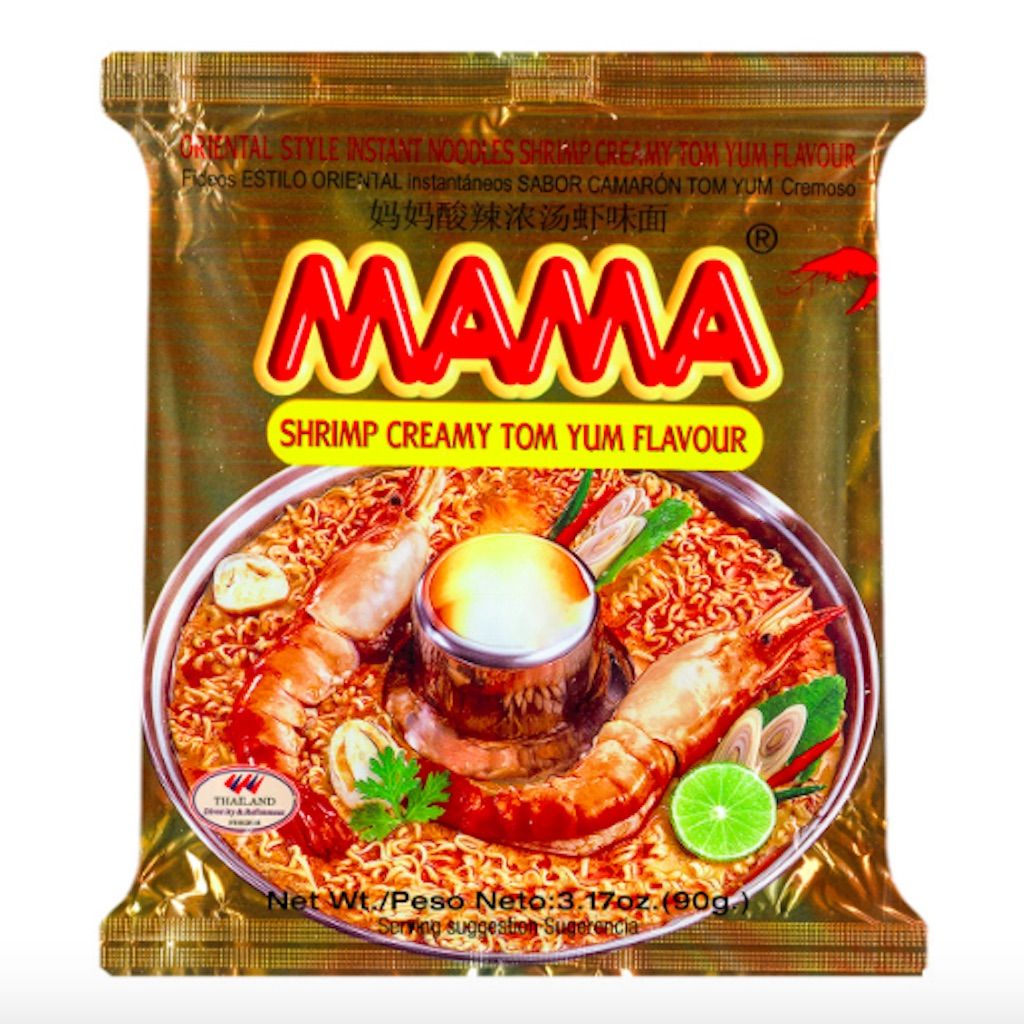 Oddly, these shrimp noodles don’t taste even a little like shrimp, despite having the word “shrimp” in the title. Maybe it’s one of those “lost in translation” things.

Regardless, this creamy broth has a pleasant level of spice with chewy noodles that are almost the consistency of a pasta casserole with considerably more water. For non-lovers of seafood, this could just be the most affordable gateway food.

Try it for yourself: MAMA Tom Yum Shrimp Flavor 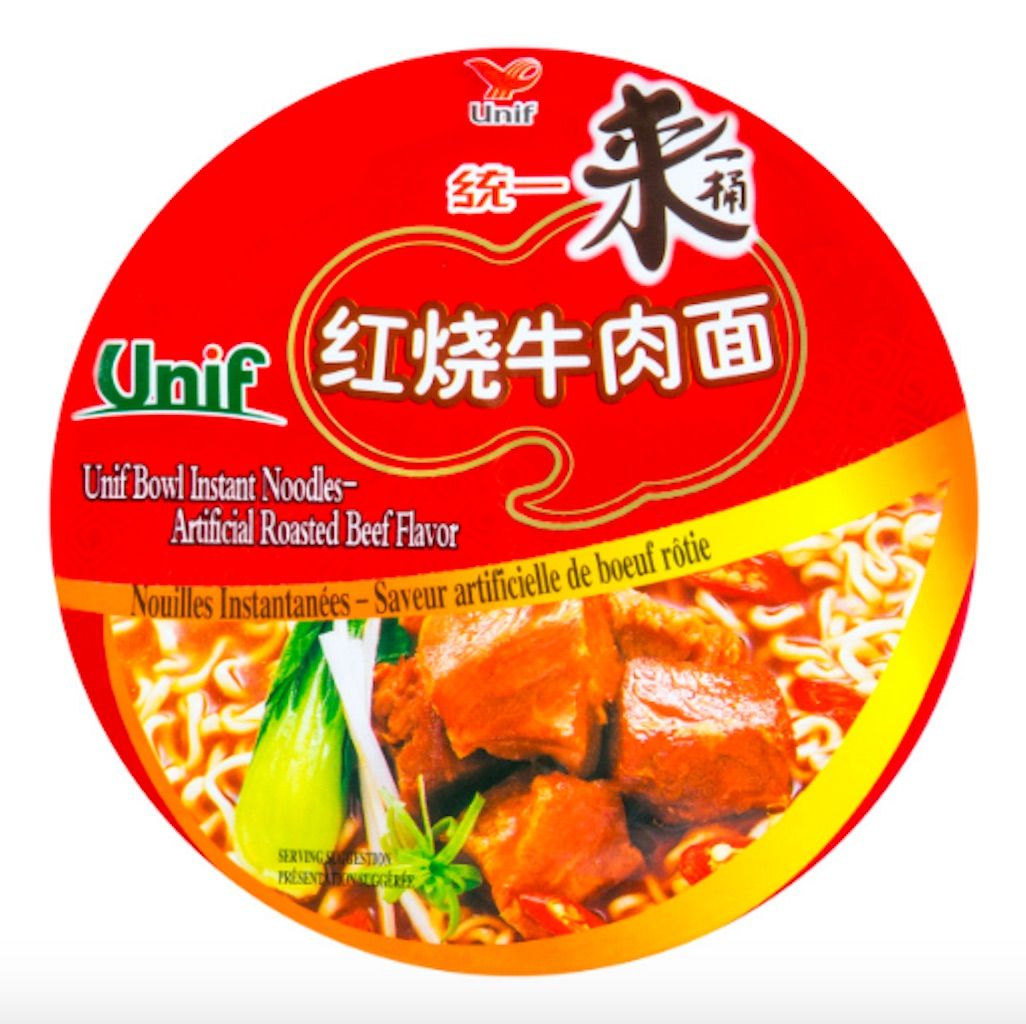 Though “spicy” would probably only apply to these Taiwanese noodles if you served them in a senior center cafeteria, the bowl has a pleasant, savory, and slightly meaty aroma that’s warm and comforting — especially if you’re eating it in cold weather. The dehydrated vegetables have some flavor, and in the case of the bowl I tried, there was actually a discernible cabbage leaf!

Most of the flavor comes from the package of thick red paste you put on the noodles before adding water. If you eat it with a spoon and get plenty of broth, the UNIF bowl has one of the more complex flavor profiles on this list. 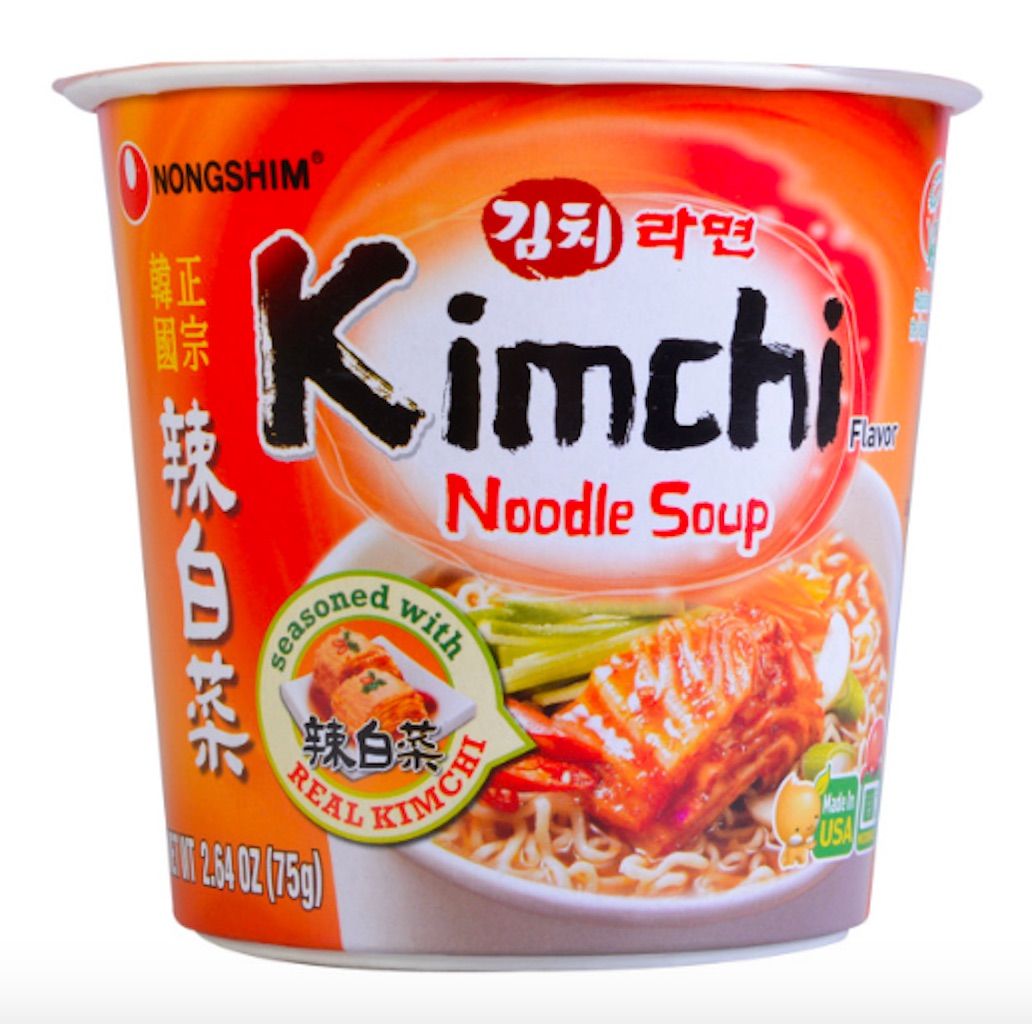 Well vegans, even though you cut out cheese, eggs, and bacon, you can still wreak havoc on your cardiovascular system with some instant noodles. Unlike almost every other food in the world, instant noodles are apparently at their best with no animal products whatsoever.

This Korean instant noodle cup gives off a rich, oniony scent when you open the lid, with strong notes of sour cream and onion Pringles. Throw in boiling water and three minutes later you have a tangy, vegetable-heavy soup that finishes spicier than it starts. The noodles are nothing special, I’d say they’re on par with any instant cup you’d find at Costco. But the broth is the most flavorful on the list, with a kick that builds the more you eat.

Try it for yourself: NONGSHIM Vegan Kimchi Cup