With the global rise in strongmen, it can be easy to forget that Turkey is still a democracy, full of diverse outlooks and points of view. Despite the authoritarian tendencies of President Recep Erdogan, who gets much of his support from conservative, religious Turks, Istanbul recently elected a progressive, opposition candidate as its mayor. That city leader, Ekrem İmamoğlu, has embraced an open, inclusive society — which is only fitting in this vibrant and dynamic city.

“It has the East. It has the West. It is really a melting pot of cultures,” says Erk Erkaya of his native city, Istanbul. Erkaya is the co-owner of Locally Istanbul, which aims to show visitors a more personal and local view of the city.

If you should be lucky enough to find yourself in Istanbul, you should, of course, visit historic sites like the Blue Mosque, Hagia Sophia, and Topkapi Palace. But you should also check out the edgy parts of town where young Istanbulites show off their city’s curious and creative side. From independent jewelry designers to secondhand stores, the hottest bars to world-renowned restaurants, here is where you’ll find the modern, outward-oriented vibe of Istanbul’s coolest neighborhoods.

Beyoglu, also known as Pera, or “the other side” 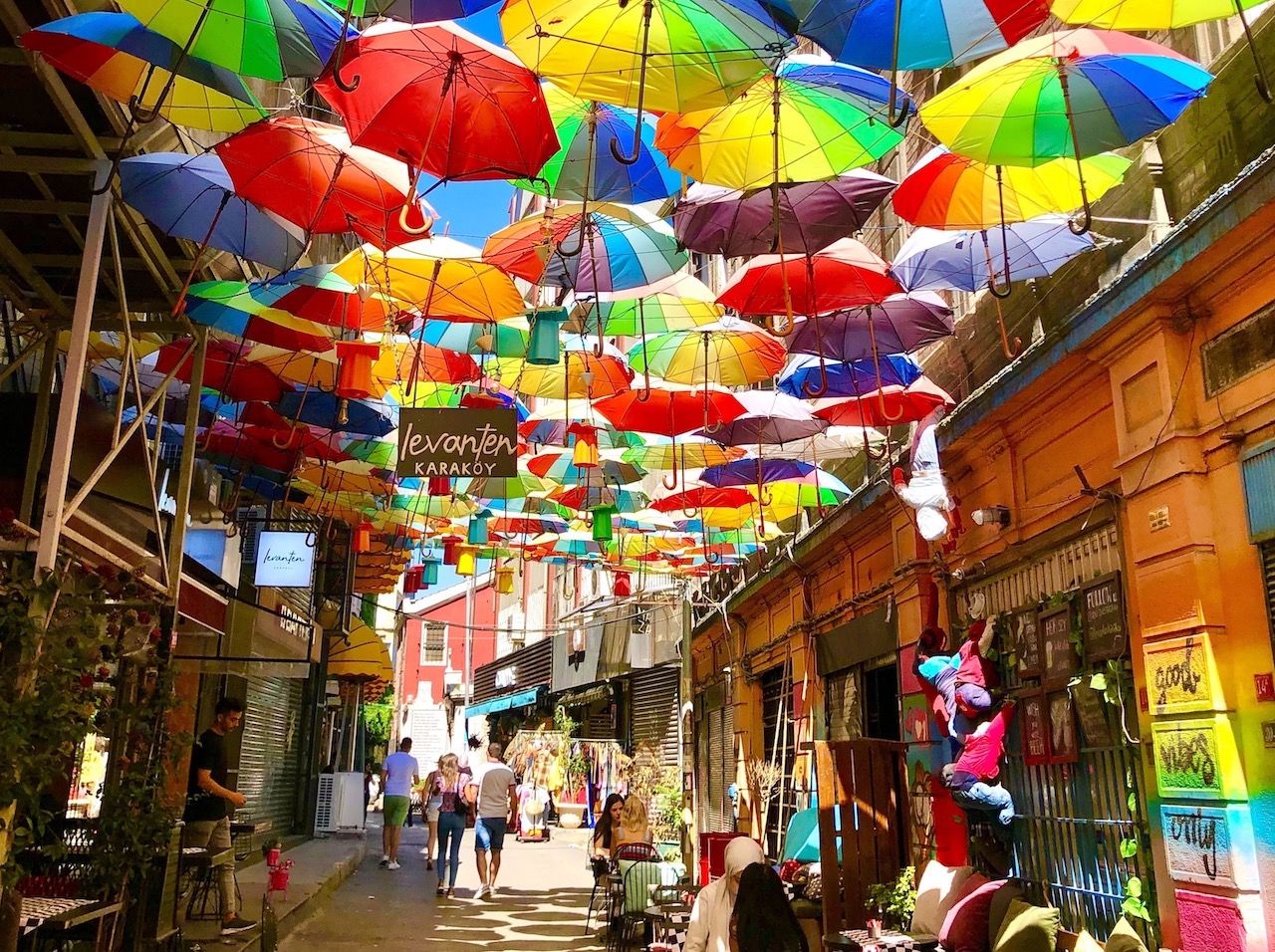 Erkaya showed me around Istanbul for two days in August. We explored the neighborhood of Pera on the European side one day and spent the next day on the Asian side, where we walked around Moda and ended our day in Moda’s Kadiköy area.

Pera appears as Beyoglu on city maps, but you’ll still find plenty of references to Pera in the names of hotels and businesses. Pera, meaning the “other side,” is located on the opposite shore of the Golden Horn waterway, across the old town of Istanbul. During the Ottoman Empire, the western European engineers and merchants who worked in Istanbul resided in Pera, giving it the more liberal, Western vibe that it retains today.

In Pera, start your day with breakfast at Privato Cafe. They say that Turkish breakfasts are the best in the world, and if Privato’s collection of nearly two dozen plates arranged at our table — bearing everything from bread, pastries, yogurt, honey, and jams to eggs, tomatoes, olives, and cheeses — is any indication, this is emphatically true.

You could spend an entire morning, day, week, or month getting to know the designers, merchants, restaurants, and bars in Pera. The neighborhood is stretched out over a hill and reaches down towards the water — filled with narrow cobblestoned streets, tiny alleyways, and endless pockets of surprises.

Bahtisen is a jewelry store that works with artisans from throughout Turkey’s vast Anatolian (Asian) region who incorporate traditional techniques into their work. At 3rd Culture, we met the brother and sister owners, cosmopolitan types who call every place and no place home — all reflected in their shop’s collection of art and wares from around the world.

You’ll find the perfect oversized denim jacket at secondhand stores like Grandma Vintage on Kumbaraci Street. Meanwhile, there are on-trend creations at the A Hidden Bee, which emphasizes sustainable and up-cycled materials. At the bottom of the hill, designer Hakan San sells vintage sunglasses with updated lenses and his own optical creations at Fashion Eye.

Fashion Eye is at one end of a recently updated gallery of shops in Pera’s Karaköy neighborhood, an erstwhile industrial port area that has been evolving away from its sketchy reputation. Also in Karaköy, you’ll find Mürver Restaurant. You’ll enjoy the view of the Bosphorus and back towards the Blue Mosque from the rooftop veranda — or you may be too focused on the whole lamb cooked in their wood-fired oven to notice.

You can catch the sunset — and stunning 360-degree views of Istanbul — at Mikla, a swanky bar on the roof of the Marmara Pera Hotel. For dinner, Sahrap Restaurant is a low-key place that is not to be missed. Chef Sahrap Soysa specializes in the foods from Anatolia that she experienced growing up.

The new Pera is in Asia 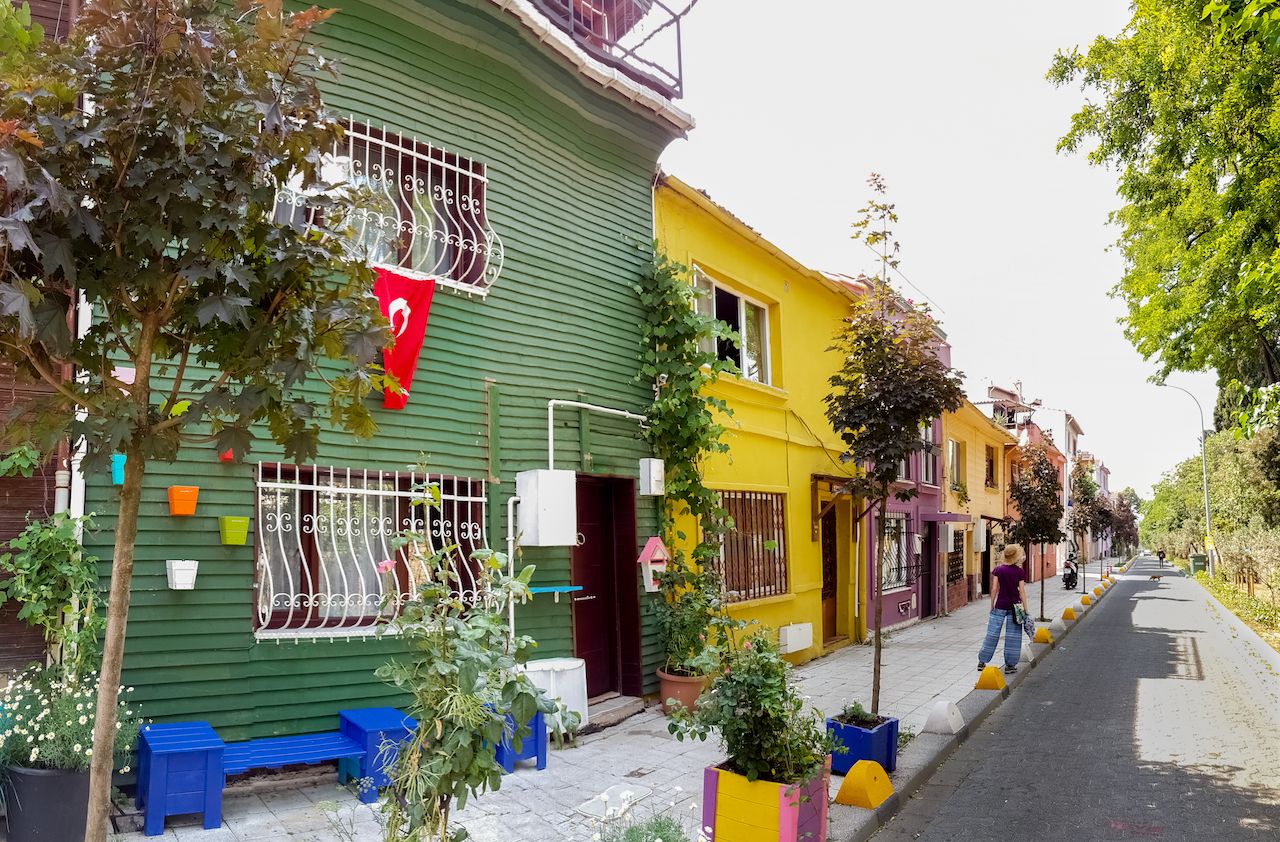 While you could spend days in Pera and not get bored, it would be like visiting NYC and skipping Brooklyn.

Erk Erkaya says the real creative soul of Istanbul is moving towards the city’s Asian side. While Pera was “the place” in Istanbul until about five years ago, Erkaya says that today, “Moda is the new Pera.”

As Erkaya explains it, the country’s internal politics — and two significant events — are behind the move towards the Asian side. The first occurrence was the 2013 uprising that began in Taksim Square to protest development plans for the area and to vent frustration at the heavy-handed ways of the Erdogan regime.

The protests spilled out all over the country, quelled only by riot police, tear gas, and thousands of arrests. The second event was the failed coup attempt against Erdogan in July 2016. While much of it was centered in the capital Ankara, Istanbul experienced a few attacks, as well, including an explosion at the TRT broadcasting station — in or near to Istanbul’s Old City and Beyoglu.

He compares the rise of the Moda in Asian Istanbul to the rise of Brooklyn. While Brooklyn became cool because Manhattan just got too expensive, says Erkaya, people moved to Moda in search of an escape from underlying political strife. He also says that the Asian side offers locals a calmer way of life — offering residents a more intimate sense of community. That too sounds like Brooklyn, you might say.

“The really more cozy, hip, and happening places are here,” says Erkaya, adding, “Now you hear people on the weekends saying, ‘Let’s go to the Asian side.’”

Better yet, Moda is very local. Pera’s shops and bars are still hip, but a full half of their customers may be travelers in town for a short while. In contrast, a recent study found that only 15 percent of international travelers to Istanbul even visit Moda, and when they do, they don’t explore much beyond its waterside area of Kadiköy (not to be confused with Pera’s Karaköy neighborhood).

Celebrating old and new in Moda 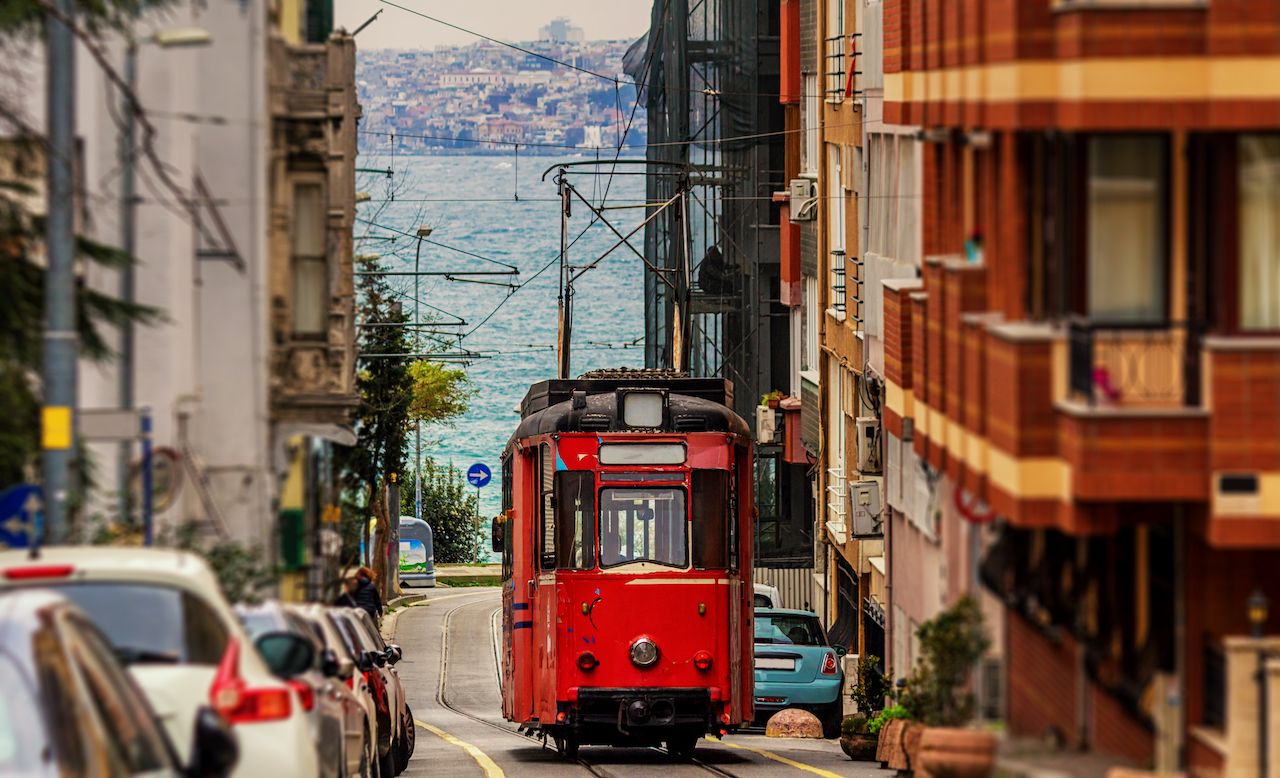 Erkaya says one reason travelers don’t hit up the Asian side is that it seems complicated — but he suggests an excellent, manageable itinerary to actually do so. It’s an easy, 20- to 22-minute ferry ride across the Bosphorus to Kadiköy on the northern side of the larger Moda area. You can get the ferry at Eminonu in the Old Town, from Karaköy in Pera, or from the Besiktas area further east along the Bosphorus. Ferries depart every 20 minutes.

Once you arrive in Kadiköy, Erkaya recommends taking the “old, wooden tram” towards the far side of Moda. The tram departs every 15 minutes, and it takes 10 minutes, passing through the main streets of Kadiköy. You’ll end up on the southwest side of Moda and can spend your day working your way downhill back towards Kadiköy.

Start your day with coffee at Walters Coffee or walk a little farther towards Guten Morgen, where you’ll see locals sipping flat whites in front of their laptops. About halfway between both cafes are Vintage Mode, a secondhand and “retro fashion” boutique, and Wunder, a hip streetwear and sneaker shop. Further down the hill, closer to Kadiköy, is Tellalzade Street, otherwise known as Kadiköy Antiques Street. While it has some shops worth perusing, Erkaya recommends walking through to admire the preserved old-style architecture.

Lunchtime should be reserved for one place only: Ciya Sofrasi. The nondescript restaurant, with outdoor tables packed on a summer day, could easily be mistaken for any other eatery on this boisterous pedestrian street. It is not. Chef Musa Dagdeviren’s take on Turkish specialties like lahmacun, Turkish flatbread with beef, or eggplant and lamb stew, have earned him global recognition.

Lunch at Ciya is a wonderful reminder that Istanbul’s hipster neighborhoods are also very much Turkish, embracing and sharing with others the wonderful foods, traditions, and talents of this rich country while also being receptive to and curious about new ideas.

After lunch, you could visit Baylan, a dessert shop that hasn’t changed its look in decades but draws locals who grew up savoring its “Kup Griye” pistachio and caramel ice cream and its chocolate mousse. It may be tough to grasp the draw of Baylan, but it’s not hard to appreciate its nostalgic appeal to those who grew up here. If it’s time for an afternoon drink, have a cold one at Draft or a cocktail at Mathilda’s. 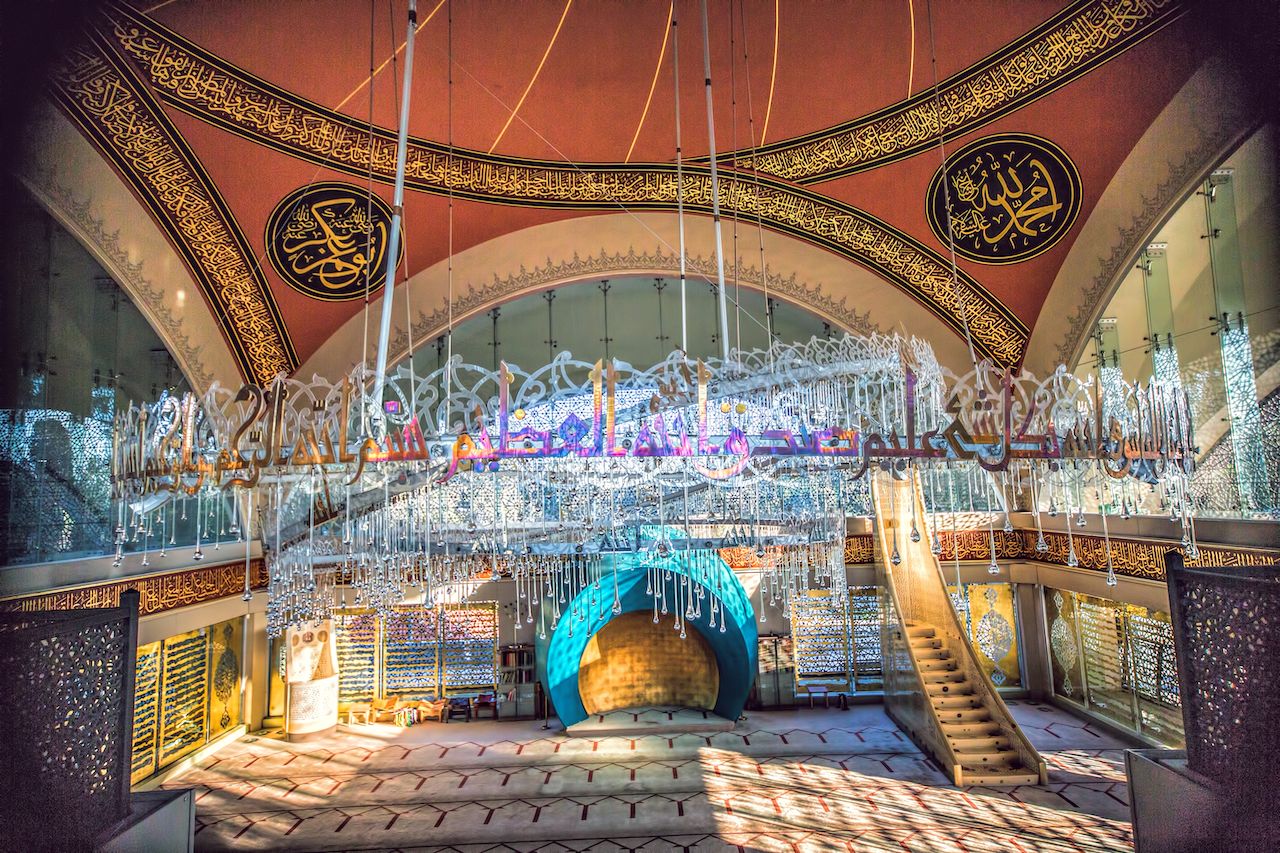 I recently asked Erkaya about current events — namely Trump’s Syria pullout and Turkey’s rush to fill the vacuum — and whether he felt that travel to Turkey was still safe.

“I have thought a lot about that question,” he replied. “I’d say Istanbul is as safe as Paris, London, or New York.” He opined that letting events in Syria affect your decision to travel to Istanbul would be like avoiding New York because of troubles in Oregon.

More significantly, perhaps, is that Istanbul is the place to reflect on the complexity of Turkish society. In the same way that attitudes in Brooklyn probably have little to do with Trump’s America, you can’t know Turkey by just reading about Erdogan’s latest moves.

Istanbul has long been a dynamic, open place — and you don’t have to go to trendy bars to see that. Before spending time in Moda, Erkaya took us to see another sight on the Asian side: the Sakirin Mosque, the world’s first mosque designed by a woman. A security guard at the mosque lent me his athletic jacket, which smelled strongly of exercise, so I could cover my head and shoulders to go inside.

Before entering, we had to wait for a funeral service to end. A truck parked just outside was serving up free lokma (fried dough) to mourners in keeping with the Turkish tradition of offering sweets to guests at memorial services. When the attendees poured out, they looked like Turkish society: some women wore hijabs that appeared to be a regular article of clothing for them, while other women were clad in summery outfits, minimally covering their heads in colorful scarves.

Inside the mosque, the women’s area is in a mezzanine above the men’s area, offering a clear view of the chandelier designed to look like drops of rain bringing God’s love to all below. The Sakirin Mosque was airy and light-filled, its broad, clear windows open to whatever the outside world had to show.

The memorial service with its incredible mix of attendees, the family of the deceased generously giving out treats even as they grieve, the guard who offered his pungent coat, and the open windows of the modern mosque itself seemed such a perfect metaphor for Istanbul. The city is a complex mix of old and new, of cherished traditions and progressive thought, and it remains, as ever, generous, open, and inviting.

CultureEverything You Need To Do in Istanbul’s Underrated Asian Side
Tagged
Culture Trip Planning Istanbul, Turkey
What did you think of this story?
Meh
Good
Awesome

Why Istanbul Is the Best Place To Teach ESL