“We’re like a beach town with a big side of country,” Jay Dodson tells me as we toast a couple of beers at 10:30 in the morning. We’re standing behind the bar at Hoptinger Biergarten, his Jacksonville Beach beer bar that plays cool beach shack by day and bad-decision hotspot at night.

Dodson is dressed in a Hawaiian shirt, shorts, and flip-flops, and is almost a mascot for what this city on the northeast coast of Florida has become: a whole lot of beach, a good dose of business savvy, Southern hospitality, and absolutely no pretension. It’s the kind of place where having a beer at breakfast time isn’t at all unusual, and taking it with you out to the beach is encouraged.

While the Gulf Coast beaches and the bright lights of Miami draw the bulk of Florida’s non-mousey tourists, Jacksonville might just be the state’s best undiscovered destination. It’s affordable, it’s warm, and it has just enough sophistication to keep you interested once you’ve had enough of the sand. And best of all, you won’t be sharing it with painful numbers of snowbirds.

Jacksonville has the kinds of beaches people cross oceans for. 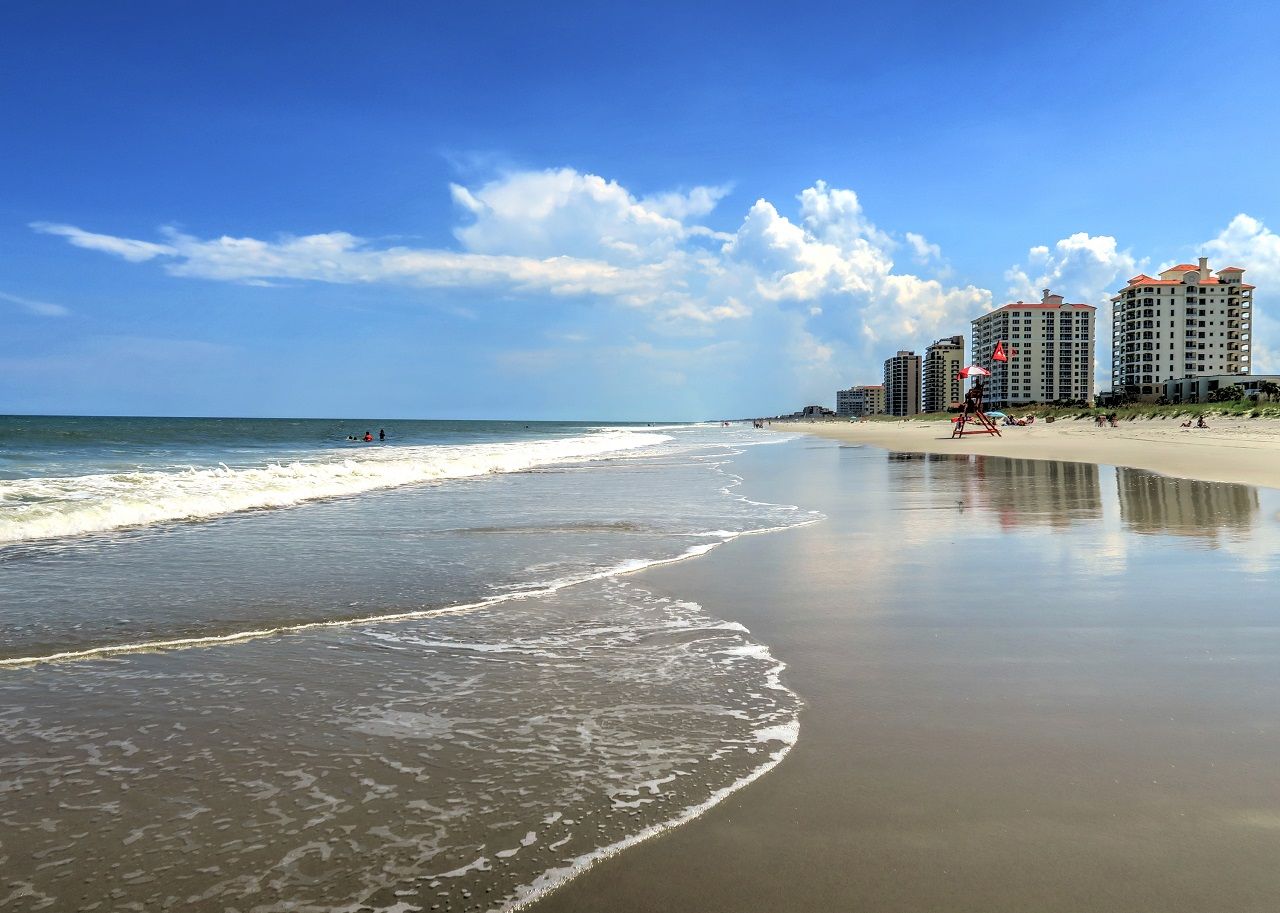 Jacksonville Beach, where Hoptinger sits, is home to most of the city’s nightlife as well as 22 miles of mostly unspoiled Atlantic coastline. With that much space to spread out, the city’s 800,000 residents never crowd the sand too much, and unlike more-popular beach destinations in Florida, you’ll almost never have to fight for a slice of sandy real estate.

The coastline is dotted by other little beach towns too, like Atlantic Beach, where coffee shops and yoga studios give it a distinctly California feel — minus the California traffic and prices. Here you’ll find people jogging the beach at sunset and returning to their little bungalows on the sand, a pleasant departure from the glut of condo towers one usually finds in Florida.

Head a little further south and you’ll find one of the most spectacular American beaches nobody has ever heard of. Guana State Park, about a 35-minute drive from downtown Jacksonville, sits at the foot of towering, grassy sand dunes. The wide, golden sand has nary a soul, and the clear blue water is bathtub warm six months out of the year. It feels completely isolated and remote, reminiscent of beaches in Zanzibar and other hard-to-reach destinations. But this one is only a short drive from a major airport. 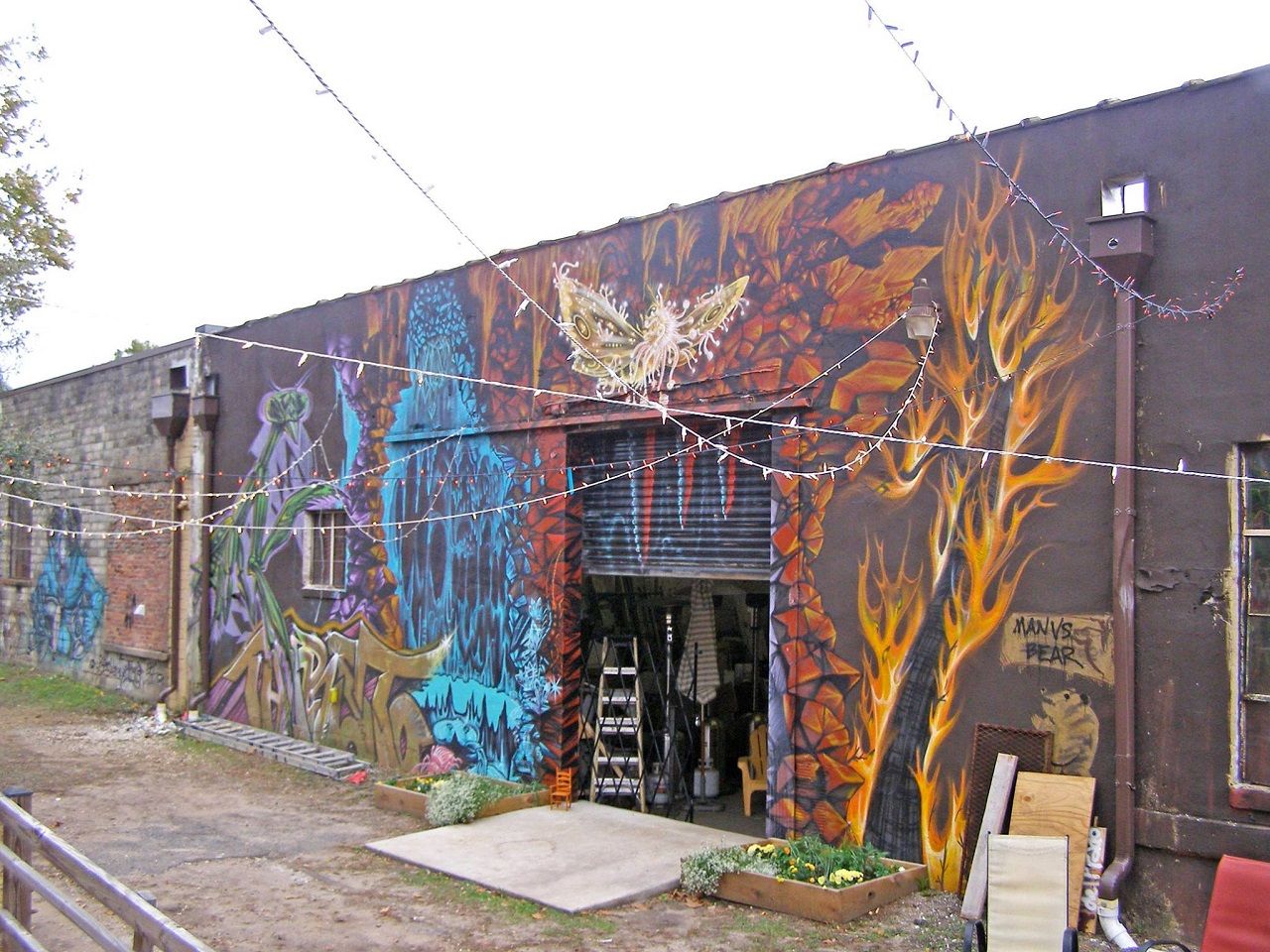 A few blocks from Jacksonville’s hipster Riverside district, full of stately historic homes, Thai fusion restaurants, and the creative hangout at Bold Bean Coffee, you’ll find the CoRK Arts District. This one time furniture warehouse is now a massive artists’ work space, where you can walk down the hall and see a sculpture made of bottle caps, epic murals, and cartoon greeting cards with rubber ducks captioned “No, Siri, I did not say ‘Badass Motherducker.’”

Though it’s not open to the public most of the year, it does give the city an infusion of artists who have a direct impact on the city’s culture. Downtown Jacksonville has covered itself in murals over the past five years and has drawn some of the biggest names in street art to help liven up its once-struggling urban core.

There’s more outdoors than any big city in Florida. 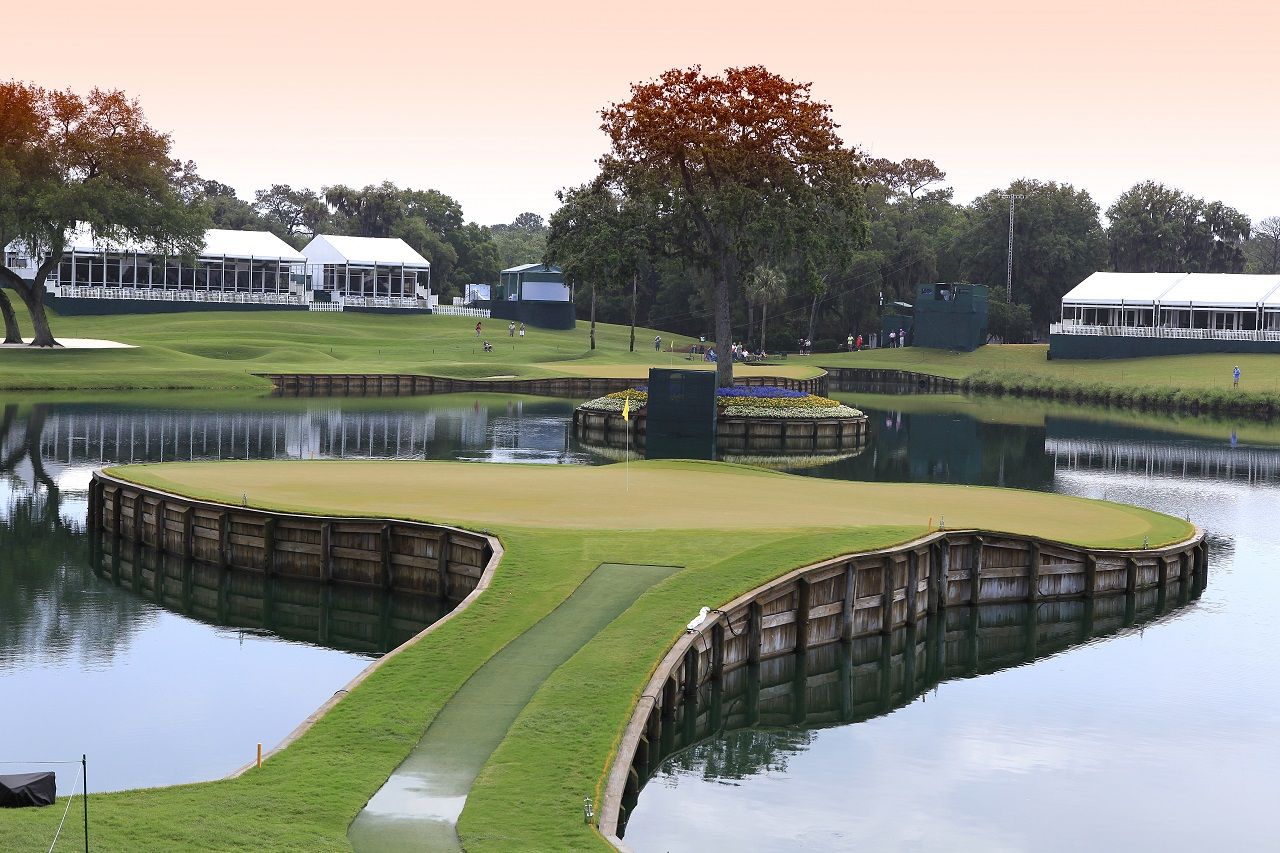 Lost in Florida’s allure behind Deco Drive and Cinderella’s Castle are the mangrove passageways and deep green estuaries that make it an outdoorsman’s paradise. As the largest city by area in the lower 48, Jacksonville is teeming with outdoor opportunities, whether that’s taking an airboat out on the St. Johns River and into some of the tiny waterways that feed it or fishing the tidal flats with stops for lunch on deserted beaches.

In all, Jacksonville has 1,100 miles of navigable waterways, meaning you can escape people pretty easily. And when you’re floating down a perfectly still tributary with pine trees surrounding and a heron flying overhead, it’s hard to feel anything other than relaxed.

The city also has what passes for surfing in Florida. Not exactly breaks you’d travel for, but hit Atlantic Beach or the Jax Beach pier and you’ll find enough to keep you occupied if you’re a novice. Though it’s not exactly getting back to nature, we’d be remiss in discussing the outdoors here if we didn’t talk about golf. Ponte Vedra, just south of Jacksonville, is the home of the PGA Tour, and the famous TPC Sawgrass course and its iconic island green.

In the spring, it hosts The Players Championship, which, much like the Kentucky Derby, is really more of a weekend-long party than a sporting event. The tournament, with its miles of local food vendors and beer tents, is a great time even if you don’t know a nine-iron from a steam iron, making this far and away the best time of year to visit.

The city has dozens more courses beyond TPC, too. So even if you can’t score tee time there, you’re never short for options.

Sports are accessible, and downright fun. 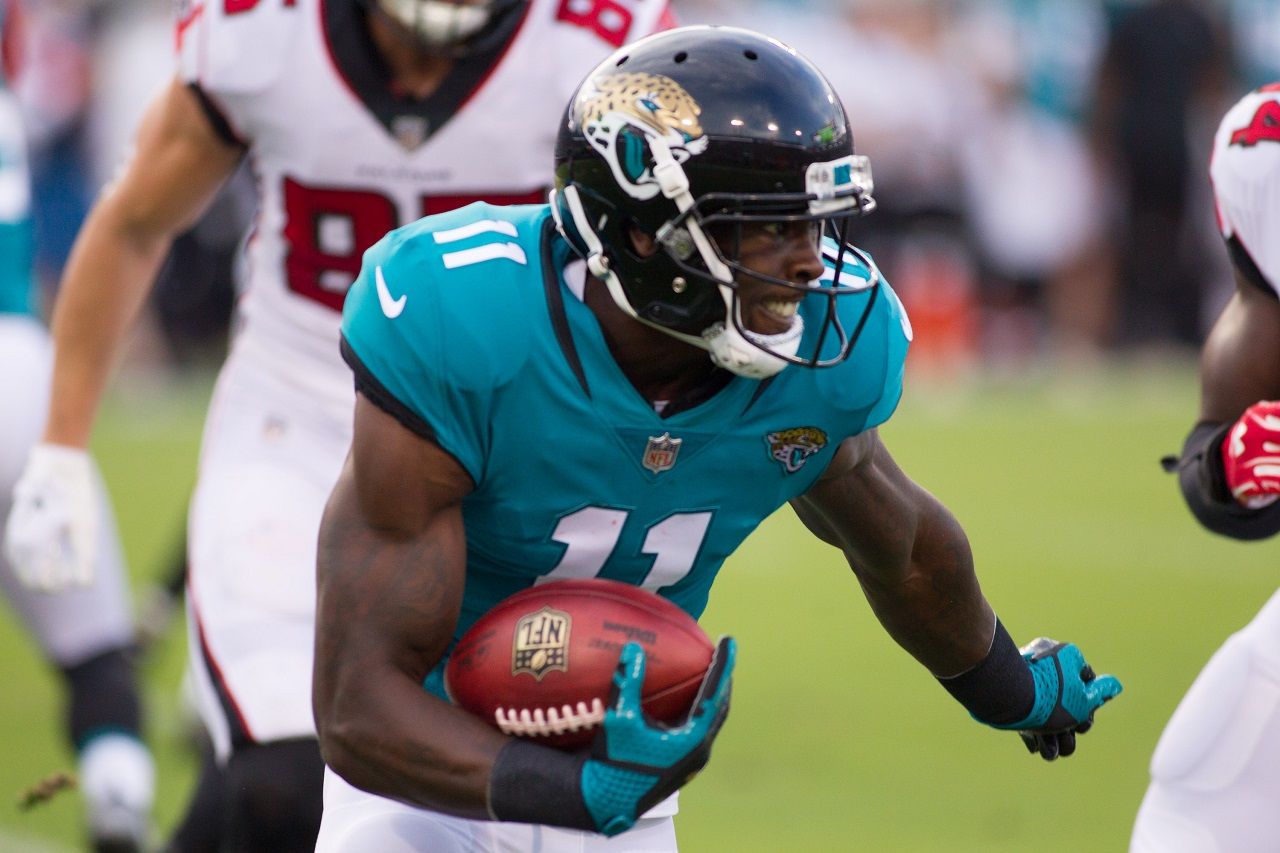 The only thing a lot of people know about Jacksonville is that it’s home to the NFL’s Jacksonville Jaguars. What few know is that Jags games, in addition to having hot tubs from which to watch the action, are also some of the easiest and most affordable tickets in the NFL. As the only major league team in town, the Jags have a passionate following too, and a trip to TIAA Bank Field will show you a solid cross-section of the city.

But if you happen upon Jacksonville between April and August, you absolutely must make a point to watch the Jacksonville Jumbo Shrimp. That’s a baseball team, in case you were confused. The AA affiliate of the Miami Marlins play at the Baseball Grounds of Jacksonville, a classic brick ballpark where you’re never more than a couple hundred feet from the action. Ticket prices here average about $15, with beers about $5, and the crowds here sometimes top the big league team in Miami.

On Thursdays, the $1 beers at Jumbo Shrimp games make them the social hub of the city, a popular pregame for the younger set before hitting Jax Beach. But also a top spot for affordable family entertainment. 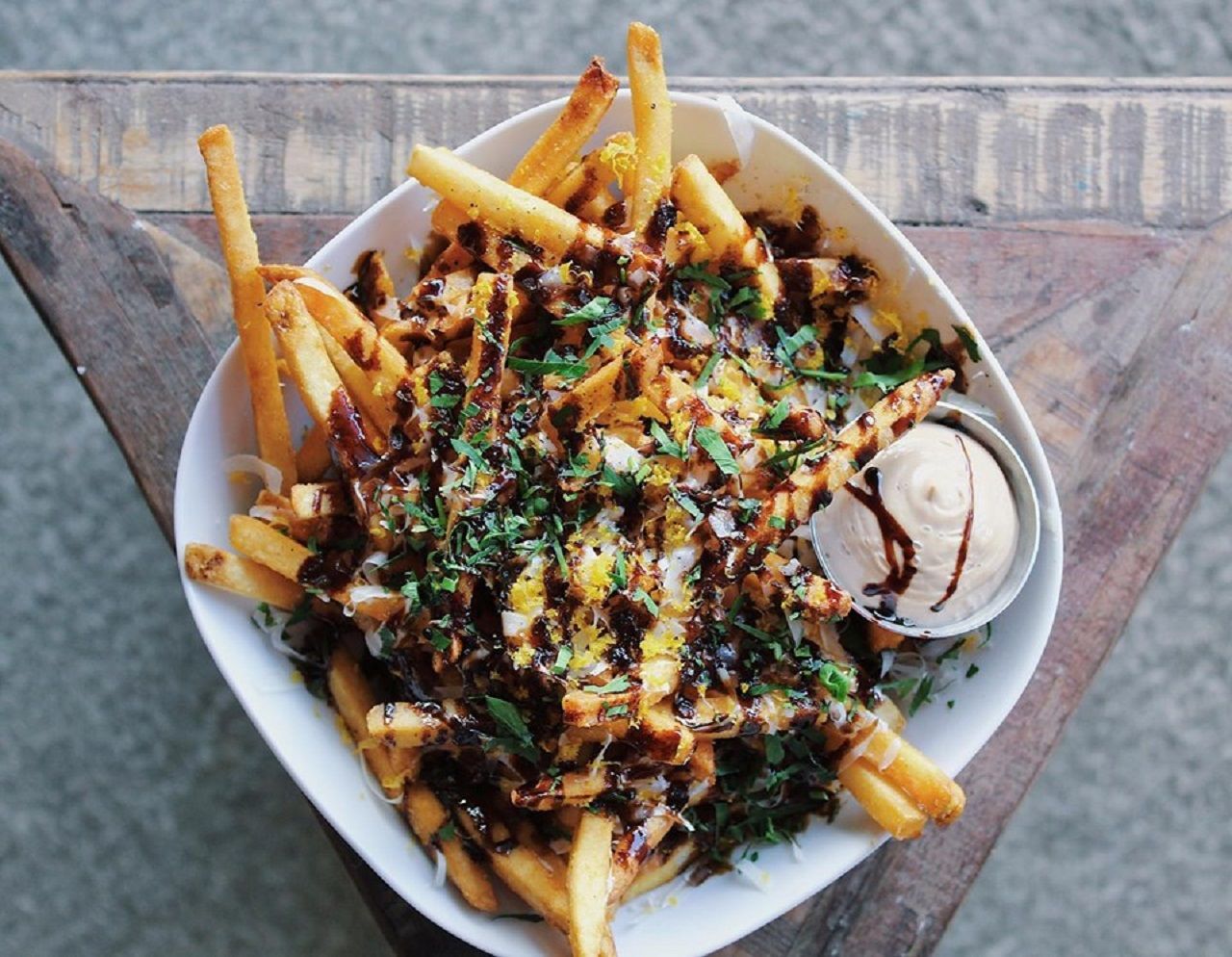 James Beard awards and nominations have become the benchmark by which a city’s culinary scene is judged, and unbeknownst to many, Jacksonville has notched multiple nominations, for Orsay and Town Hall. They’re part of the family of restaurants run by Jonathan Insetta, a Jax native who is effectively the driving force behind the city’s dining scene.

His cuisine falls mostly along the New American spectrum, with an emphasis on some Southern specialties like Carolina trout with glazed haricot vert. Painted Hills ribeye with cauliflower and spinach gratin is another classic.

In addition to his Beard-nominated spots, Insetta also runs Black Sheep in the Five Points neighborhood, best known for its rooftop bar and spectacular sunsets. You can also sample his creations at Bellwether downtown, a fast-casual concept with stuff like Korean fried broccoli, confit duck leg, and chicken meatball banh mi.

You’ll rarely have to wait long for a table at any of these spots, and meals can be had for a fraction of what you would pay in larger cities. 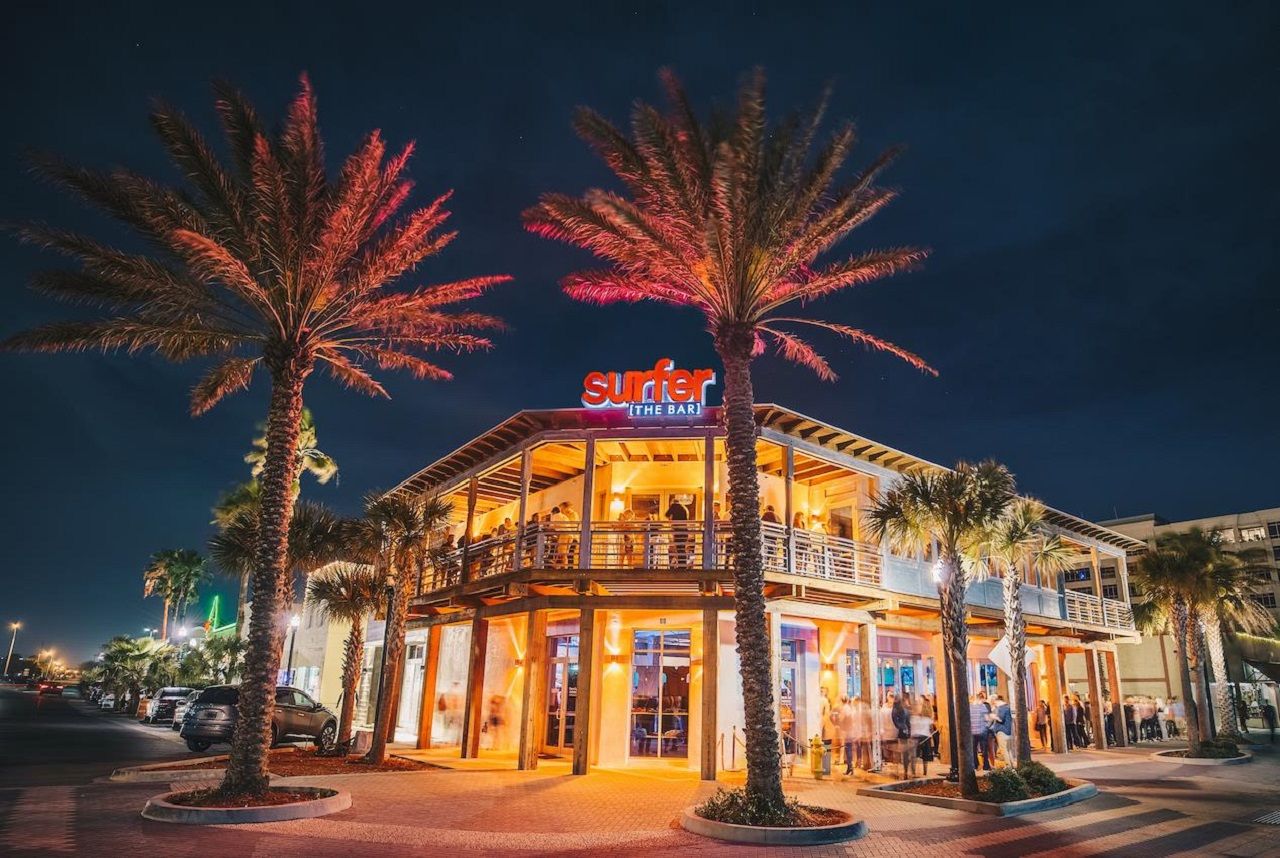 My favorite anecdote to tell about nightlife in Jacksonville was when I went into a jam-packed bar in Jax Beach on a Saturday night and ordered a drink for myself and my friend. The bartender told me, “Eight dollars.” I told him I wanted to pay for both, and he responded, “I know, that’ll be eight dollars.”

This wasn’t at a seedy neighborhood dive bar, either. This was at Surfer: The Bar, a two-level sweatbox of a nightclub frequented by local college students and young professionals. The crowd is as attractive as it is energized, but has none of the exclusionary, you-can’t-sit-with-us attitude of nightlife you’ll find in other parts of Florida. It shares the Jax Beach spotlight with the aforementioned Hoptinger, which is a little like going to a tailgate at 2:00 AM. And Lynch’s, a sprawling Irish bar with live music and equally cheap drinks.

Jax Beach is the hub, but nightlife isn’t limited to the coastal stretch. Downtown you’ll find a bustling jazz club full of local musicians at Breezy. Harder-core rock fans should hit the 1904 Music Hall. Both sit only a short walk from the historic Florida Theatre, a mid-century Art Deco venue that draws nationwide acts in an intimate space.

Jacksonville might not be the sexiest name in Florida. At least not yet. But if you’re looking for all the elements of a first-rate Florida vacation — pristine beaches, warm weather, great food, and heart-pumping nightlife — you’ll find it, far cheaper and less crowded than in the rest of the state. And that’s exactly why it’s a fantastic place to visit. That, and the friendlier locals, none of whom mind if their hometown stays a little overlooked.

Surfside, Florida, is a swank, sleepy escape a stone’s throw from Miami
Tagged
Beaches and Islands Culture Trip Planning
What did you think of this story?
Meh
Good
Awesome

Jacksonville Opened Its Beaches This Weekend, and It May Be a Look at America’s New Normal

Kayaking for the First Time at 99

May 5, 2022 Arrianne Talma
✖
travelstoke
Download the mobile app
stoked by