The trend for active vacations keeps growing, and we’re big fans of running in beautiful places or hiking on every vacation. But sometimes an exercise-oriented vacation can feel like transporting your neighborhood CrossFit to a random new location. That is, you don’t always get a real sense of the place you’re in when you’re participating in those healthy fitness activities.

When it comes to Jamaica’s Reggae Marathon, you won’t have to worry about that. The Reggae Marathon is pure Jamaica — complete with reggae and ska music energizing you throughout your run, dazzling ocean views, and an exciting contingent of some of Jamaica’s best runners. It’s Jamaica at its best. 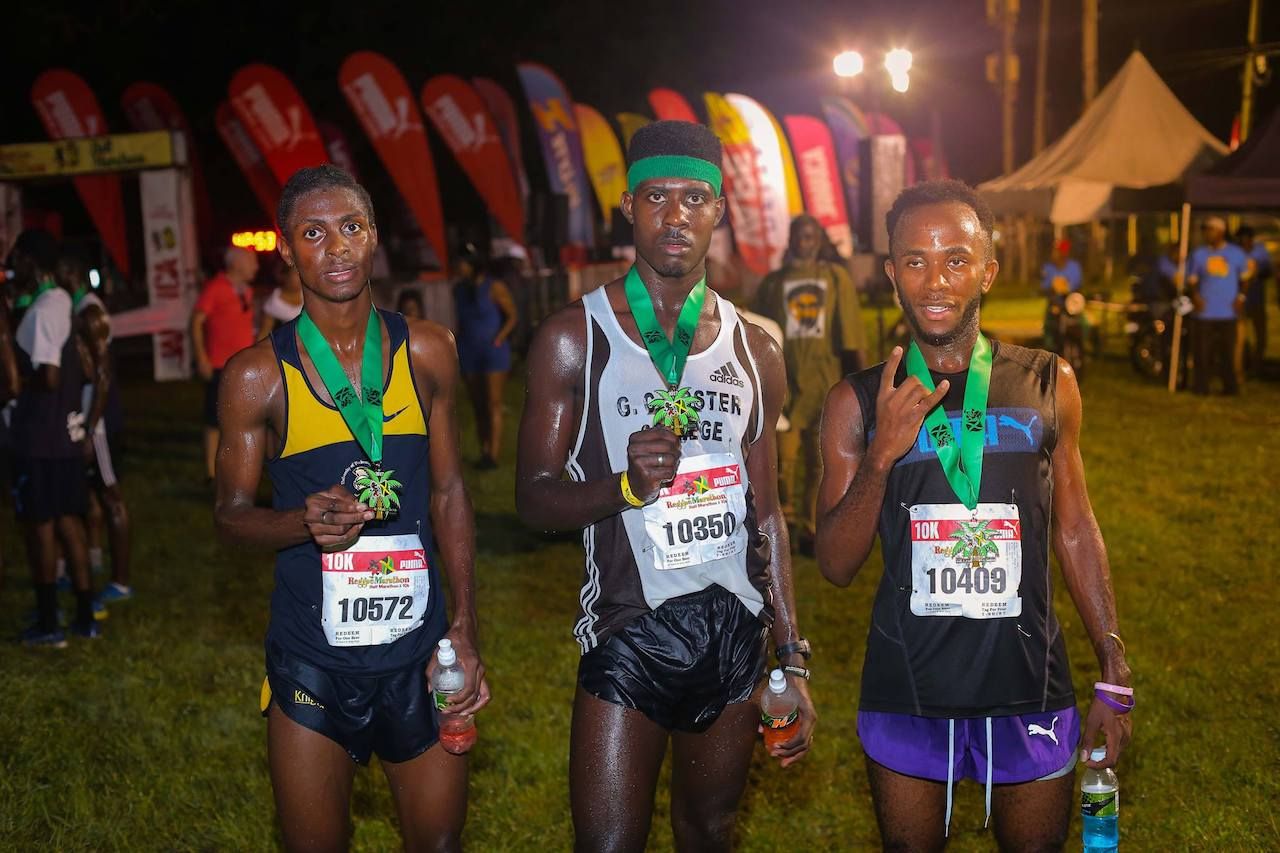 I’ve been producing running races big and small, so I was intrigued to experience race production Jamaican style. I knew there were going to be a fair amount of internationals flying in for one of the most distinctive destination races. However, I didn’t expect to find almost half were locals from Kingston and nearby towns.

The Reggae Marathon in Negril, on Jamaica’s western point, brings together the running community from all over Jamaica, affectionately nicknamed “Jamrock.” The Jamdammers Running Club from Kingston, a four-hour drive from Negril, has been putting on the Reggae Marathon for the past 18 years. The next Reggae Marathon is this coming December 8, and registration is open.

The Jamdammers club was started in 1995 in Kingston, and the running community has followed its lead ever since. The club puts on over 10 races every year, with the Reggae Marathon being the crown jewel of the series. As races throughout the United States are seeing lower participation, the Jamdammers are seeing their numbers explode. Here, Jamaicans show up to stretch their legs for a cause, put down their best times, or claim that they are the fastest long-distance runner on the island.

After years of non-native winners and record-setters, race director Alfred Francis wanted to see more Jamaicans on the podium and in the record books. He was able to double the prize money if a Jamaican were to set the course record. Now, high schoolers from the around the country line up at the start line hungry to claim the prep podium. The stakes are higher than normal, with each winning high schooler receiving three new laptops. For a country short on education funding, this is a huge draw and fuels the competitive energy on race day.

Starting before the sunrise 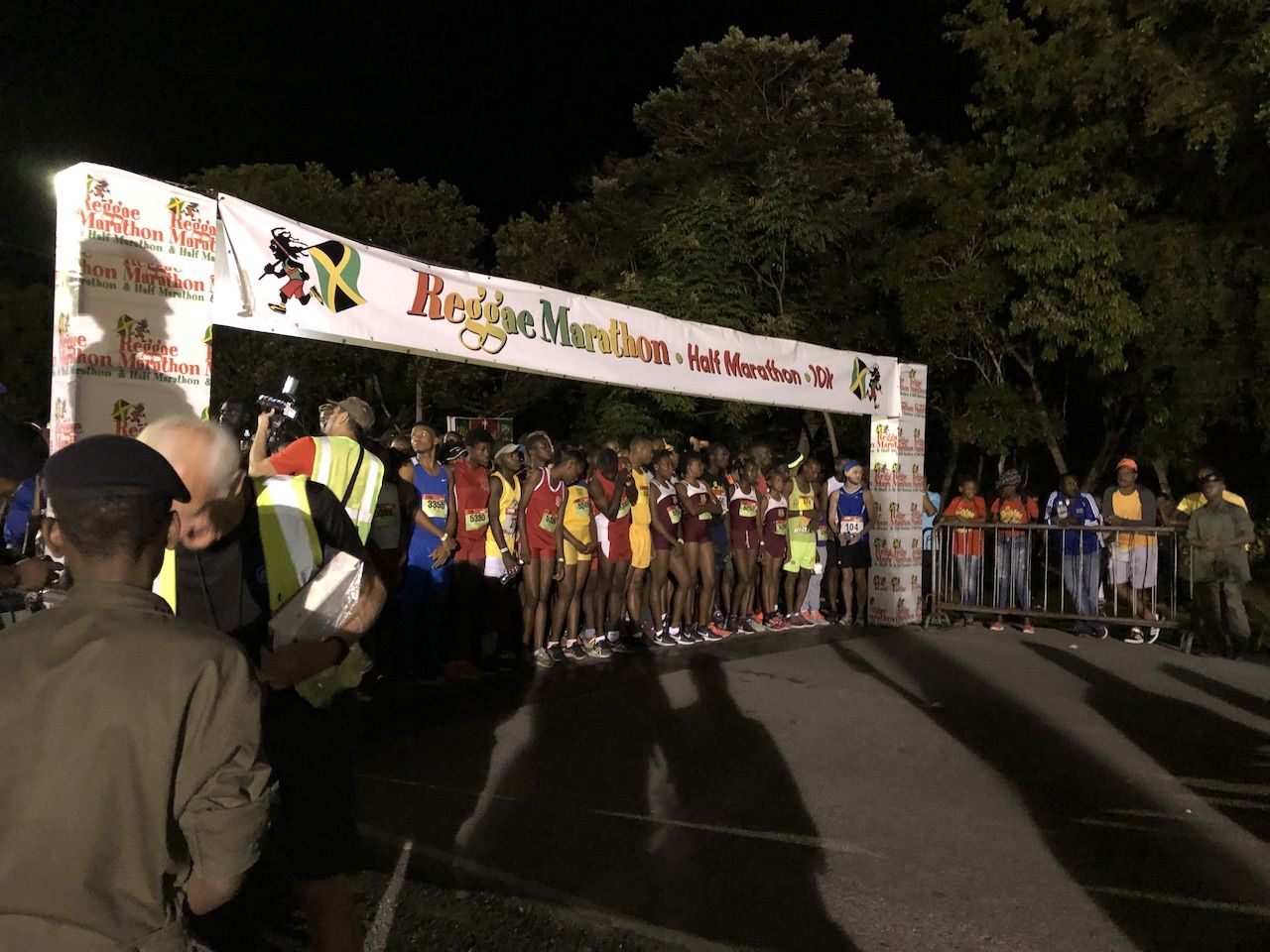 With a marathon, half marathon, and 5K race that many walk, there is a race for everyone. The beautiful course set in the west coast town of Negril follows the road along the legendary Seven Mile Beach. The race has an early start for a Sunday. As in, 5:15 AM early.

With temperatures in the 80s and a high humidity index, the early pre-dawn hours are the best time of day to chip away at the 26.3 miles of a marathon. Race officials shut down the main coastal road and let the runners have it all to themselves to run, walk, or skank to the reggae tunes. 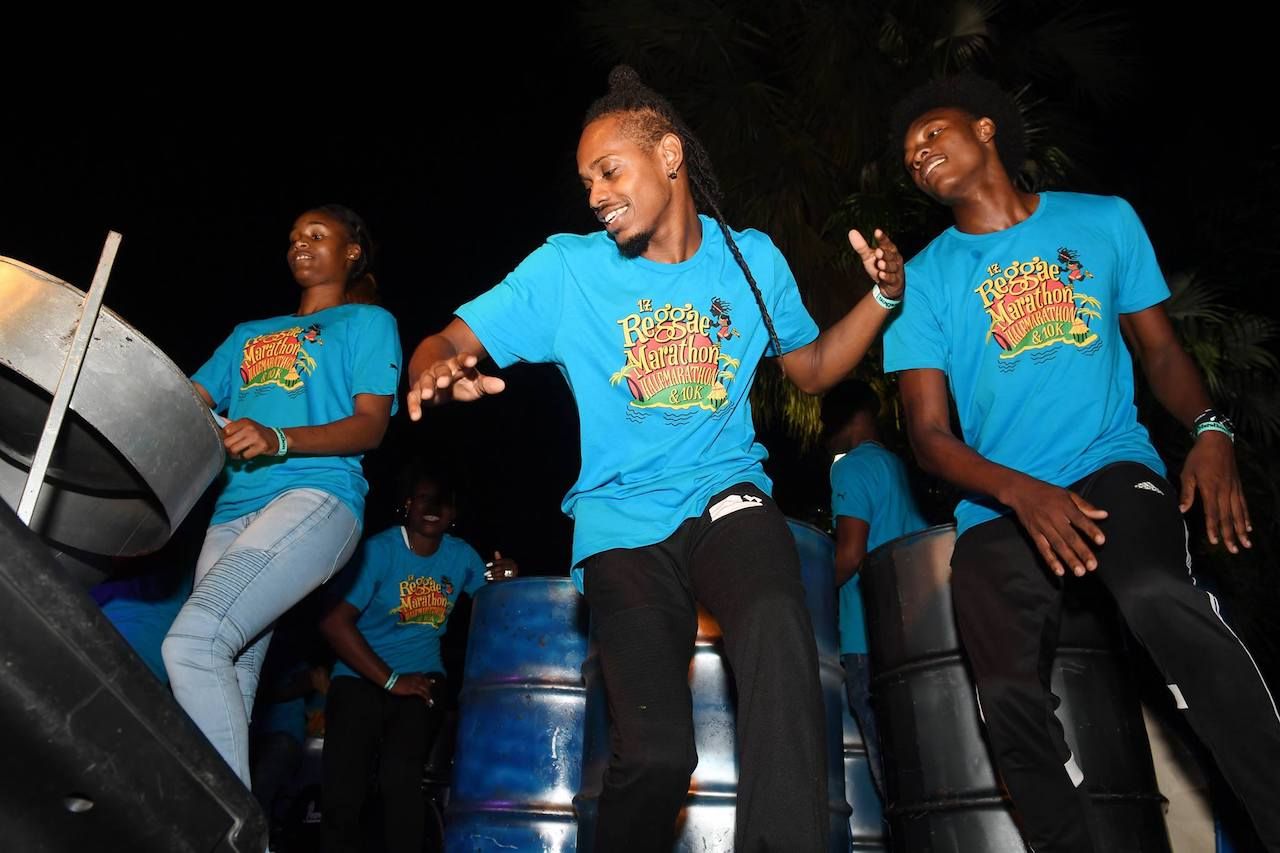 By the time runners have passed the numerous bands and massive sound systems along the course, they are ready for what awaits at the finish line: ice-cold Red Stripe beer and a fresh coconut on the beach. One hundred feet after crossing the finish line, runners plunge into the Caribbean for a fresh salt bath to soothe their hard-working bodies. There’s just no better way to start the rest of your day after pounding the pavement at sunrise.

You can learn to love plush resorts. 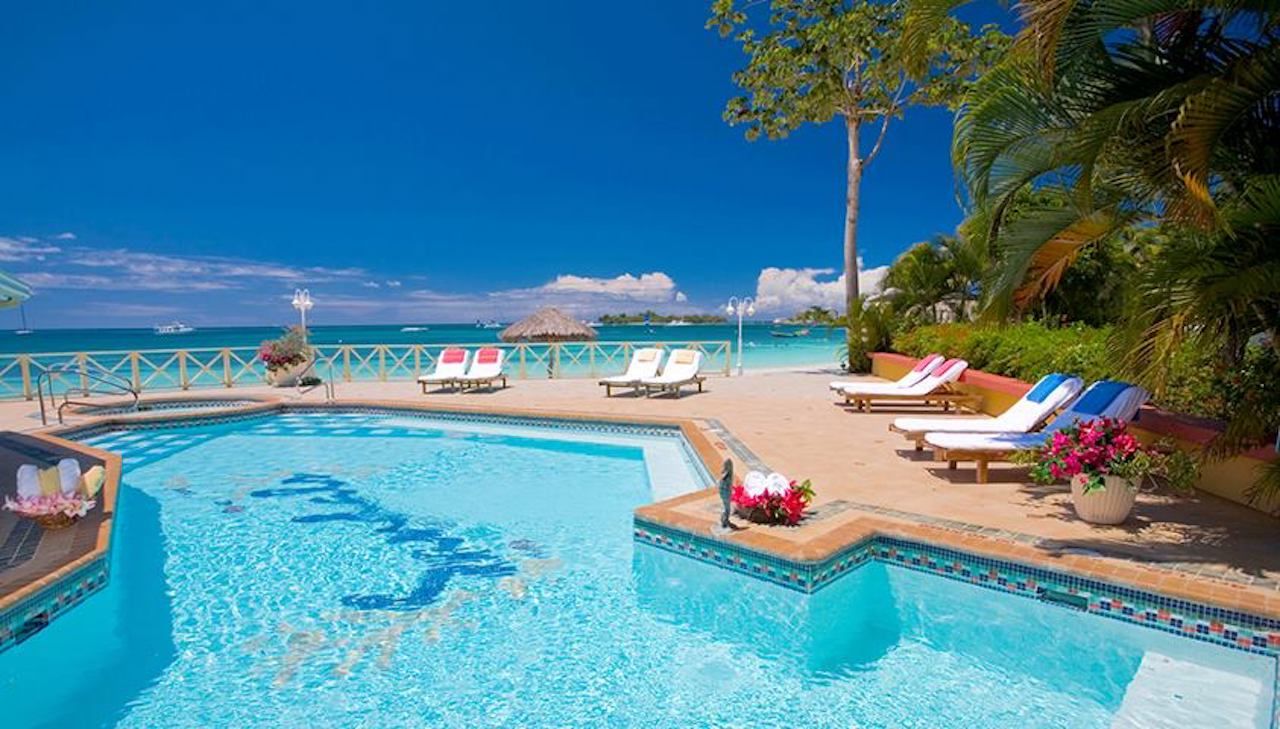 As a person who fights hard to find the unbeaten path and an authentic local experience, the words “all-inclusive” usually have me running in the opposite direction. My travel consists of fluid itineraries, language barriers, and making things up as I go. A successful trip requires struggle and surprise. So I was a little wary when I learned we would be put up at the all-inclusive Sandals Negril resort.

My partner Carolyn’s ears, on the other hand, perked up the idea of chaise lounges on the beach, seven restaurants, spa treatments, and multiple swim-up bars. After four days of lapping up the comforts and good food at Beaches Negril, though, my tune had changed. Laying on a floating lounge in the pool interpreting the shapes of the clouds with the echoey dub beats drifting in the background, I saw for the first time the serene bliss of resort life. If you’re pushing your body hard by running a marathon while on vacation, it’s safe to say you’ve earned a little bit of pampering.

Reward yourself with roadside jerk shacks. 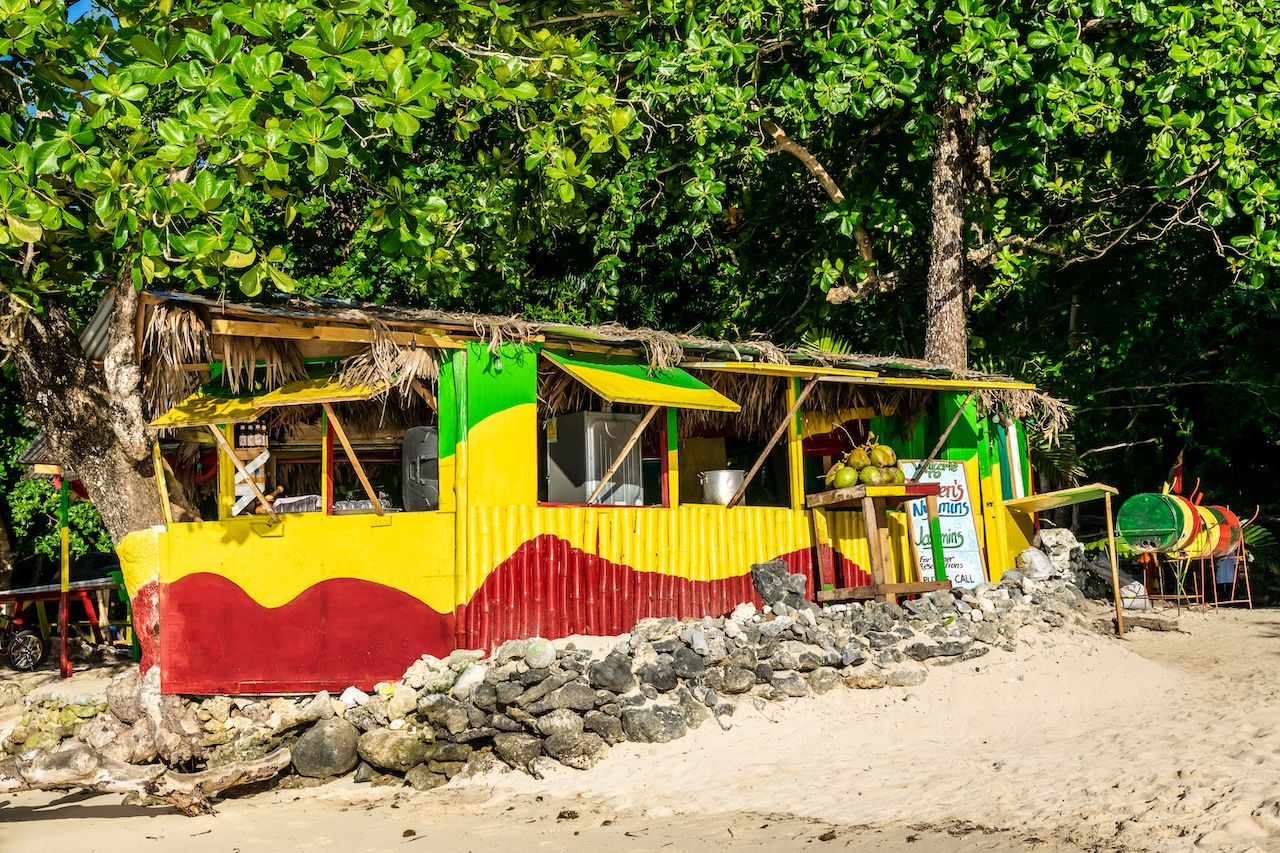 As enjoyable as pool-side piña coladas are, I still wanted to get a slice of the authentic Jamaican experience. I found this through a trek and swim at Mayfield Falls, a locally grown lunch in the mountains at Zimbali Retreat and an exploration of bucolic life among sugarcane fields. I also stopped at a few of the many roadside jerk shacks, which are abundant on most routes. I asked a number of locals about their favorite jerk spot and quickly got a list. While chowing down on sweat-inducing scotch bonnet pepper jerk chicken and getting lulled into a food coma by the pit master chatting away in Jamaican patois, I felt a lot closer to local island life.

That’s also what made the Reggae Marathon so special. The race, like the island of Jamaica, is full of wonderfully kind, welcoming people who don’t seem jaded by tourism. Despite large visitor numbers every year, most Jamaicans are not jaded by the tourism; the Jamaicans I met were fired up to share their island’s culture embodying the true “one love” spirit. Running the marathon became less about ticking another race off my list or running it in good time but about doing something I love in a new place and connecting with locals who love to do the same thing.

And it felt real good. There are plenty of ways to have an authentic Jamaican experience around the island, but if you’re a running enthusiast, you won’t regret signing up for this marathon, exploring the west coast on foot, and pounding the pavement to the beat of reggae music.

RunningWhy Trail Running Festivals Are the Next Big Thing
Tagged
Events Running Insider Guides Jamaica
What did you think of this story?
Meh
Good
Awesome

COVID-19 Is Causing Jamaica To Tighten Its Curfew. Here’s What You Need To Know