Japan’s Seto Inland Sea is a placid stretch of water cushioned between three of Japan’s main islands — Honshu, Kyushu, and Shikoku — populated by a hazy, pine-cloaked archipelago of some 3,000 islands. Twelve of these, known collectively as the “art islands,” are home to contemporary artworks and exhibits that have become an integral part of the islands’ scenery. They’re found scattered along sandy shores, in the abandoned buildings of ancient villages, and hidden along trails in the dense coniferous forests.

Like most rural, island communities in Japan, the Seto Inland Sea demographics represent a systemic problem: few young people, rapidly declining birth rates, limited education options, and next to no sustainable working opportunities beyond farming and fishing. Rather than simply working art into a sublime setting, this visionary project around the islands looks to breathe new life into these towns and villages that need it most.

Towards the end of the 20th century, the islands’ population was aging and dwindling, and infrastructural development ceased. Billionaire Soichiro Fukutake started to explore the islands in the late 1980s and was startled by their state of disrepair. With the help of one of the nation’s most renowned architects, Tadao Ando, he set to transform Naoshima, now the Inland Sea’s most popular tourist haunt.

This was the beginning of a movement that would permeate across the Inland Sea’s inhabited islands. Since the introduction of the art showcase, the Setouchi Triennale in 2010, new artworks have been introduced to the islands at three-year intervals. Many remain as permanent fixtures. Above all, the art islands are now more appealing and accommodating to travelers than ever before. 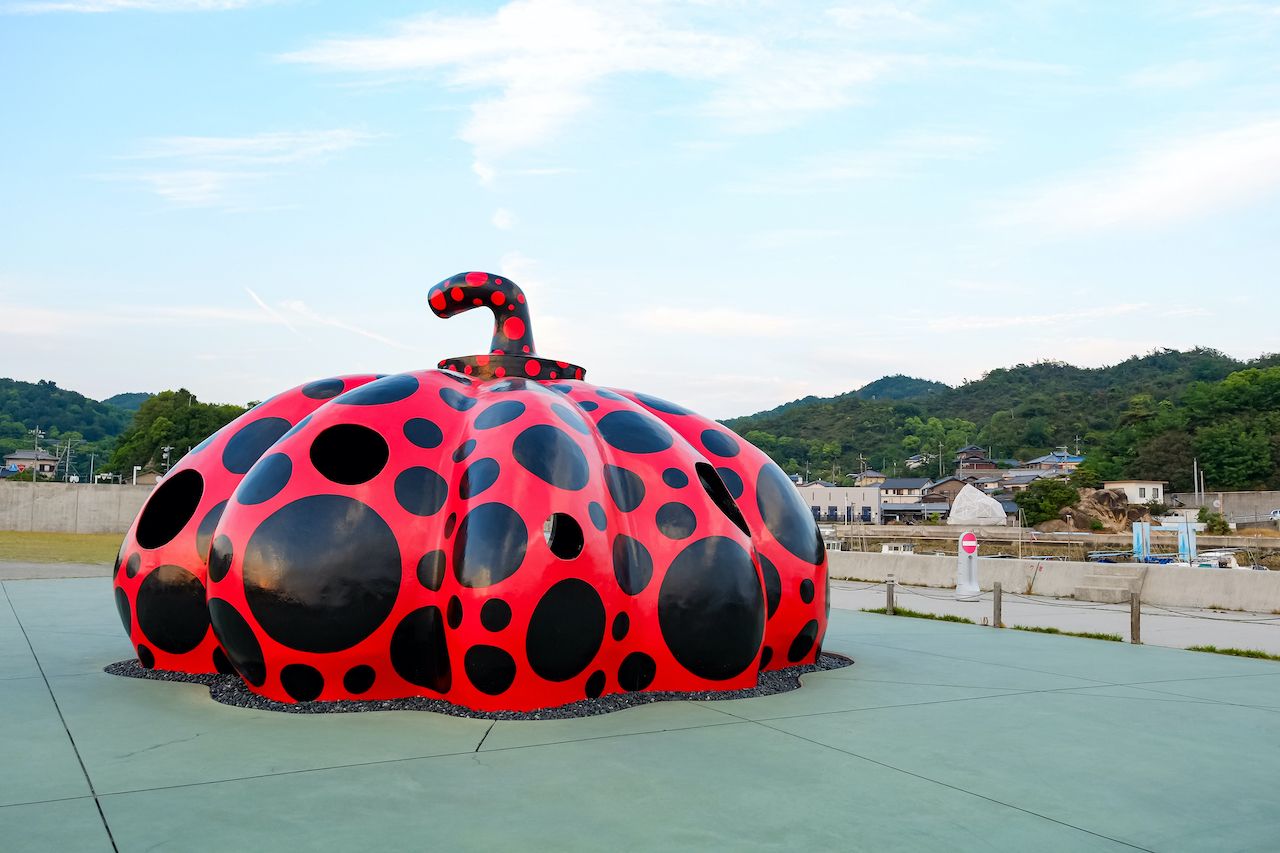 Naoshima has become the Inland Sea’s most popular destination. Under the tutelage of Fukutake and his Benesse holdings company, the island’s art has thrived to levels of global repute. Inside large edifices created by Tadao Ando (“The King of Concrete”) and erected in thought-provoking settings with stunning seascape backdrops, installations from some of the world’s top artists have flourished.

Ninety-year-old Yayoi Kusama, one of Japan’s leading sculptors and pop-art trailblazers, is responsible for Naoshima’s most enduring image: The Pumpkin. Kusama has been using kabocha (pumpkins) in her art for over 70 years, yet arguably no other has reached the same level of fame as the polka dot kabocha sitting at the end of a pier on the island’s south coast. Another Kusama red and black pumpkin is situated on Naoshima’s eastern side. 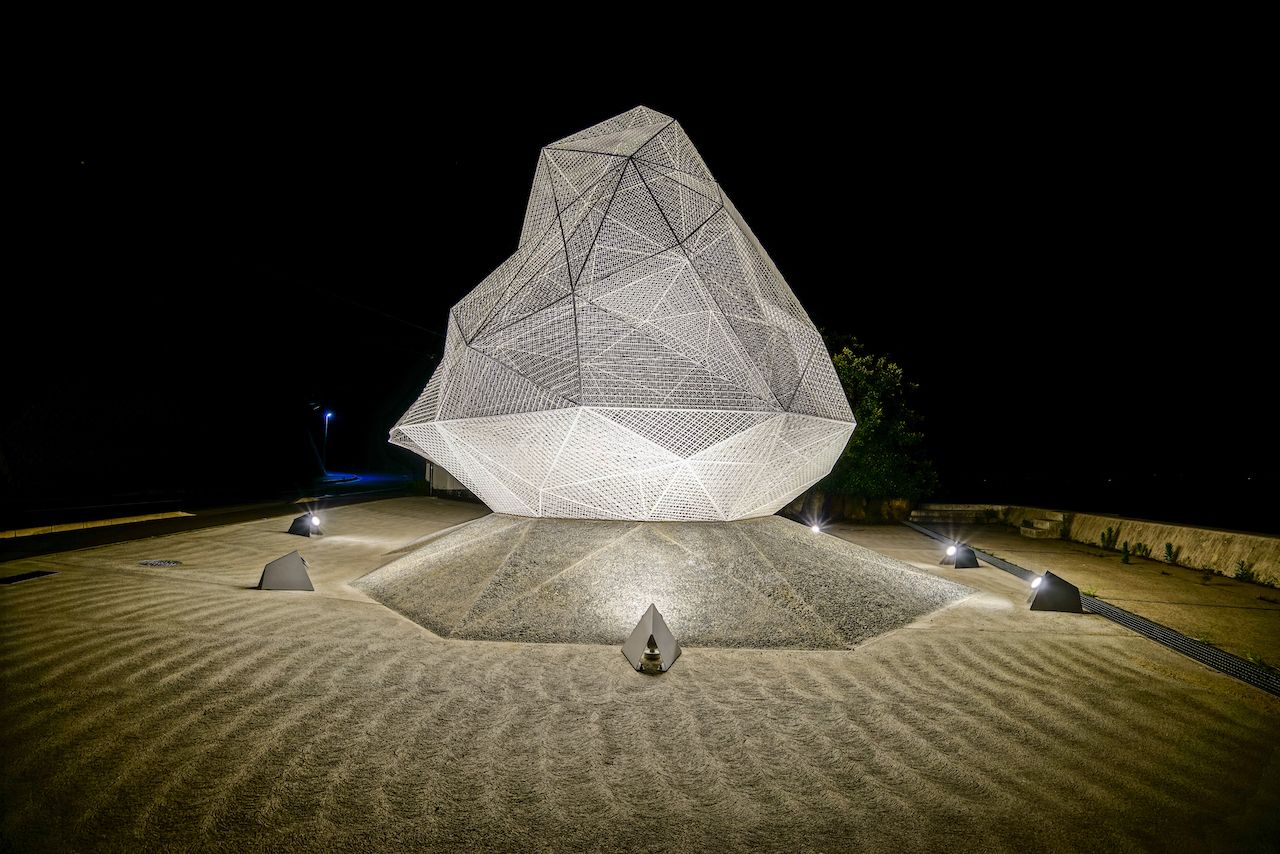 Andy Warhol pieces are also displayed on the island inside the Museum Restaurant Issen. The Chichu Art Museum, a Tadao Ando creation, showcases the marriage of concrete, space, and light — several original water lilies by Claude Monet are on display here. The Benesse House Museum, arguably the best institution on the islands, is not to be missed, featuring works from popular Japanese artists such as Shinro Ohtake, Hiroshi Sugimoto, and Yukinori Yanagi. 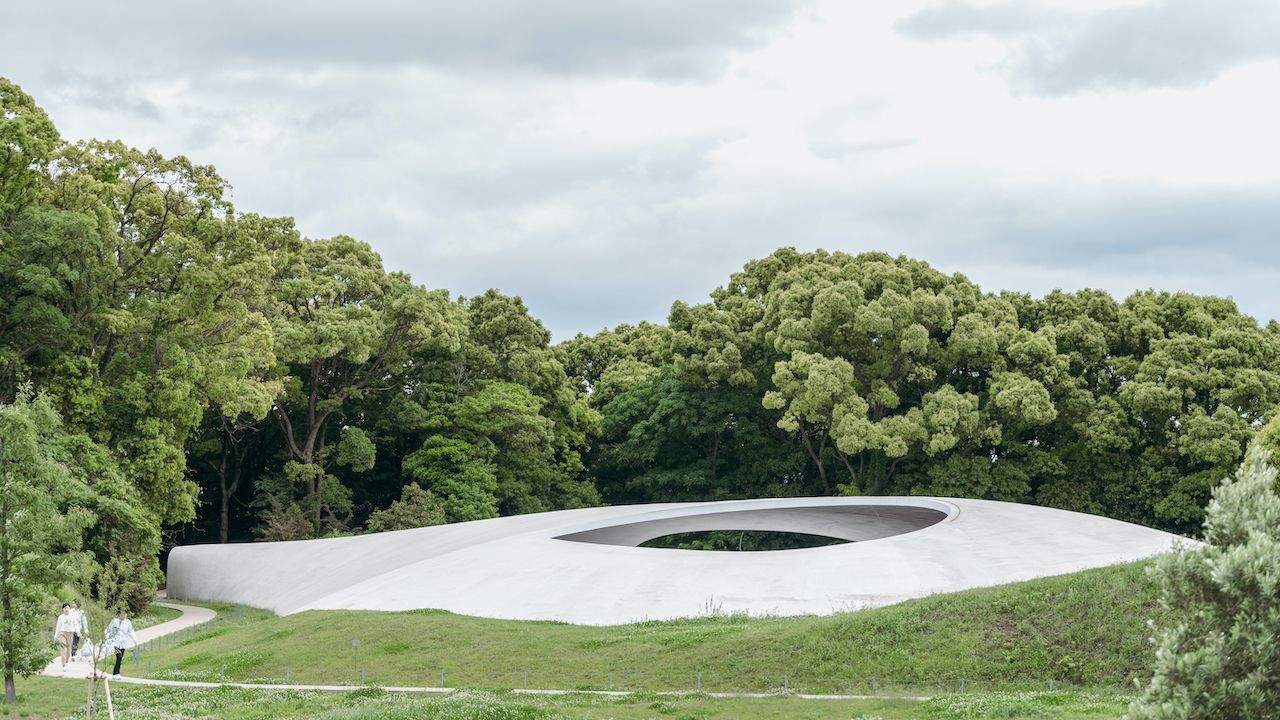 Naoshima’s larger neighbor Teshima is also under the influence of Benesse Holdings. Yet in spite of its imposing size, it’s easier to explore and, more importantly, considerably less crowded, particularly in winter. The island’s crown jewel is the Teshima Art Museum. Though it may have nominal shortcomings, aesthetically it’s a marvel.

The elongated, white-domed façade, designed by Hiroshima-based artist Rei Naito and architect Ryue Nishizawa, was intended to represent the shape of a droplet as it hits the surface of water. To me, it looks more like a half-buried spaceship, but both are equally arresting notions. The interior is lofty, airy, spacious, and gleaming white. Dynamic globules of water pool and meander underfoot charged by the breeze, which is funneled through a gaping hole in the exhibit’s roof. It puts the “modern” in modern art and is a clear juxtaposition against the museum’s rice paddy surroundings. 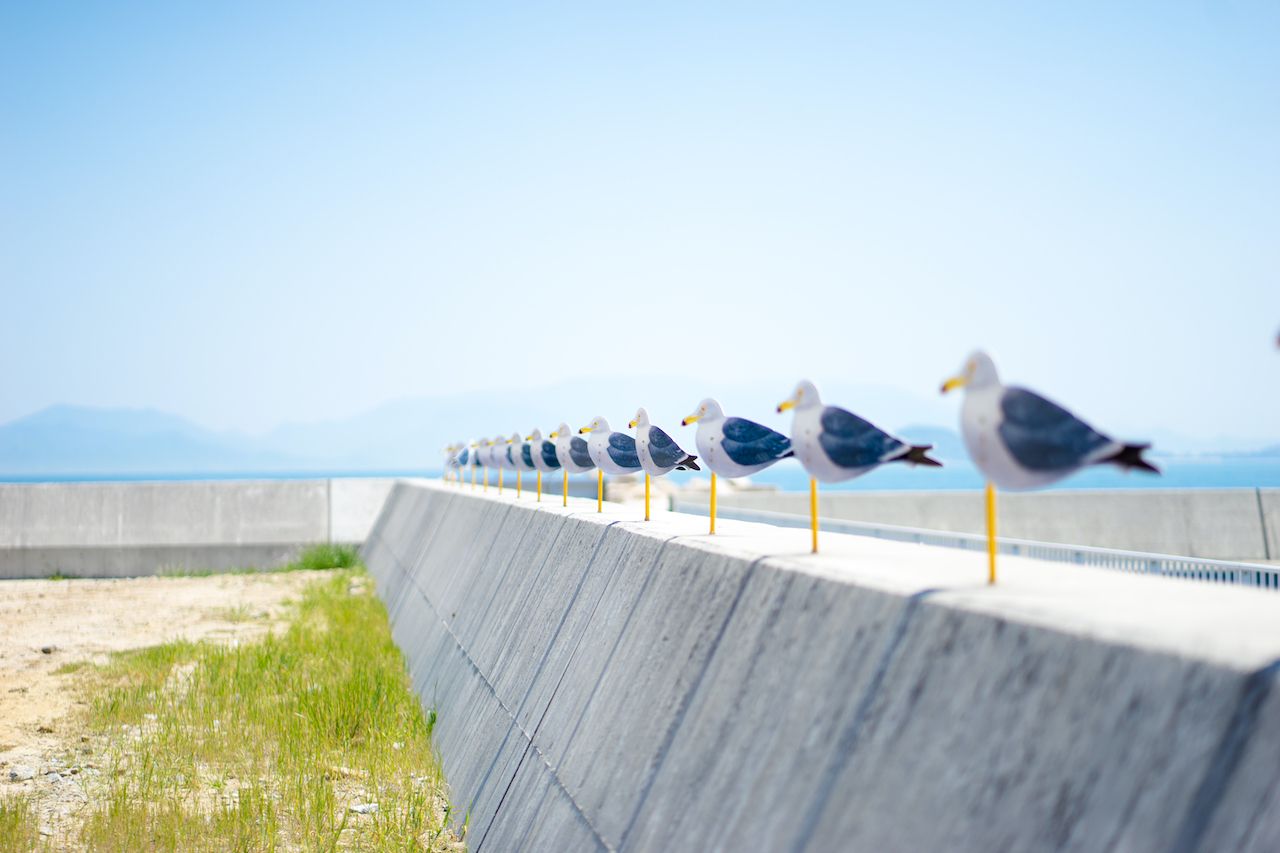 The art installations on most of the other islands are under the stewardship of the Setouchi Triennale Executive Committee working in tandem with local prefectural governments (this means that tickets and season passes are also obtained separately). Megijima and Ogijima, two small islands near the coast of Takamatsu city, have consistently displayed new artworks over the past 10 years, starting with the 2010 inaugural Setouchi Triennale.

Megijima is dotted with eccentric installations and abandoned buildings that have been reclaimed by verdant flora. This gives the island a post-post-apocalyptic feel, which is infused with Studio Ghibli-esque creations. “Ebune Drifters,” a walkthrough exhibit in the shape of a shipwrecked houseboat, and “MECON,” a Shinro Ohtake exhibit that has transformed an abandoned elementary school, both appear to take inspiration from the worlds of Hayao Miyazaki. “Bonsai Deepening Roots,” a delightful homage to Japan’s classic miniature botanical art style, is another equally impressive work. And if you’re in Megijima during the Triennale, Setouchi Gastronomy is a great restaurant-cum-artwork, featuring a three-course seasonal meal and cooking tutorial (with translation) using only locally sourced ingredients — there’s no better place to lunch on the island. 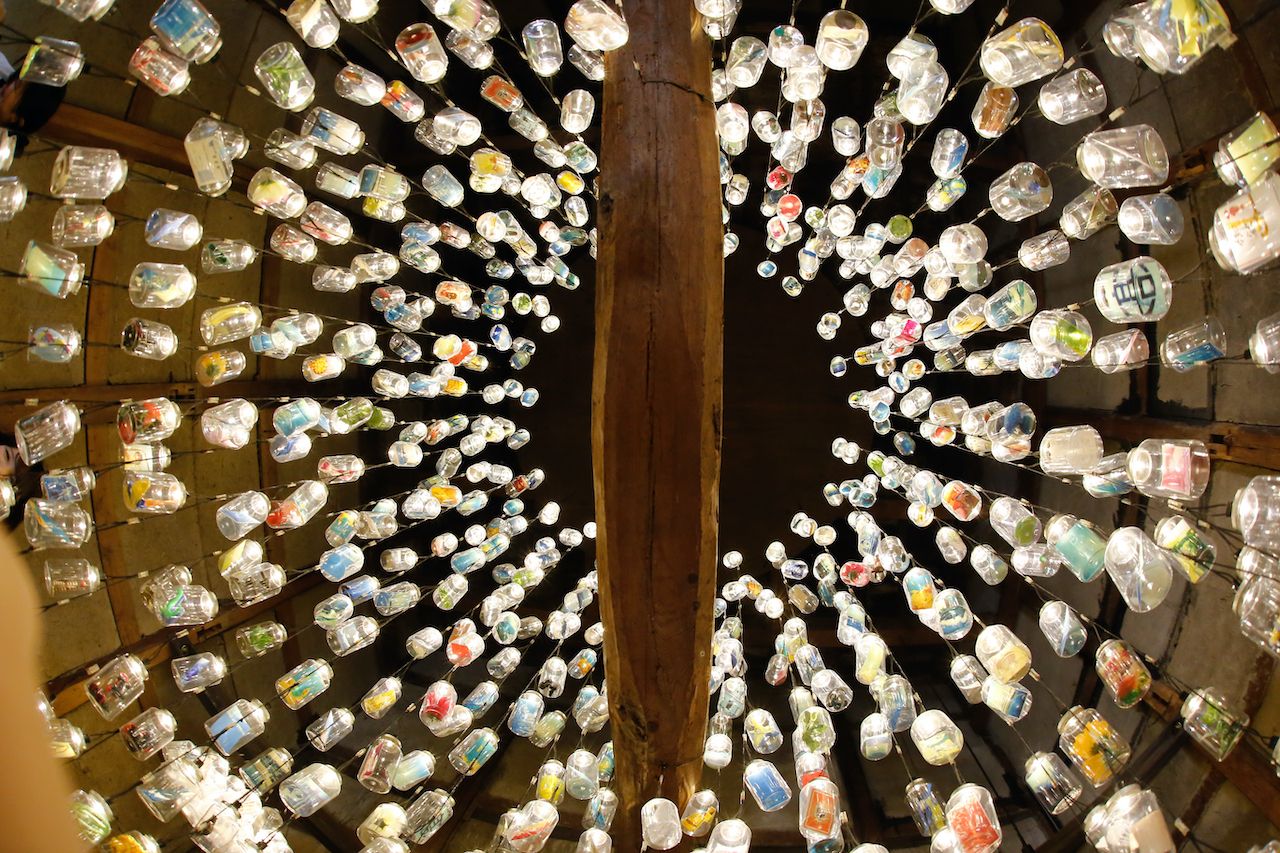 Ogijima, just 30 minutes from Megijima, features a scattering of artworks along the steep trails of a compact portside village. The “Onba Factory” showcases a menagerie of strikingly peculiar onba (walking aids). These double up as pieces of art that offer tangible benefits to the aging local populace. The visitor center here is a work of art in itself — a concrete island in a pool of glassy water with a latticework roof of Roman letters.

Both islands have new artworks added each time the Setouchi Triennale comes around. New exhibits for the 2022 edition will be revealed in due course. 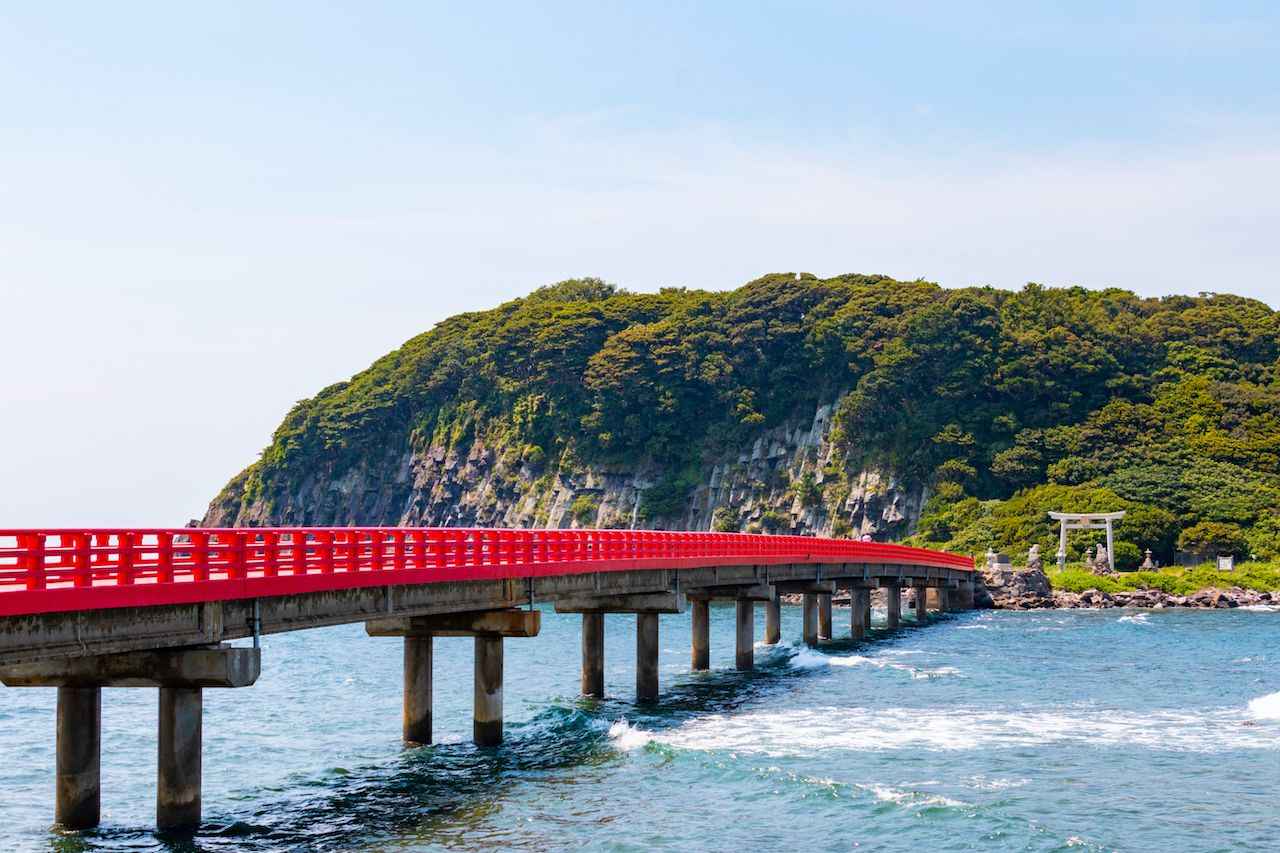 There are plenty of other art islands that are just as much worth your patronage: Inujima, Shodoshima, and the port city of Takamatsu have all succumbed to the art fever. Yet if there’s one island that really separates itself from the rest, it’s Oshima, home to Japan’s only island leprosarium.

The main complex, which used to be a sanitorium for people with leprosy, has been transformed by local artists into an immersive museum of walkthrough exhibits that detail the islands initially horrifying, yet more recently uplifting, history. The final piece on the island, “Ringwanderung,” is particularly memorable — a hike over the hills through bamboo groves and past scenic sea views with plaques on which quotes from victims of leprosy are etched. It’s stunning and touching in equal measures.

Getting to the Art Islands 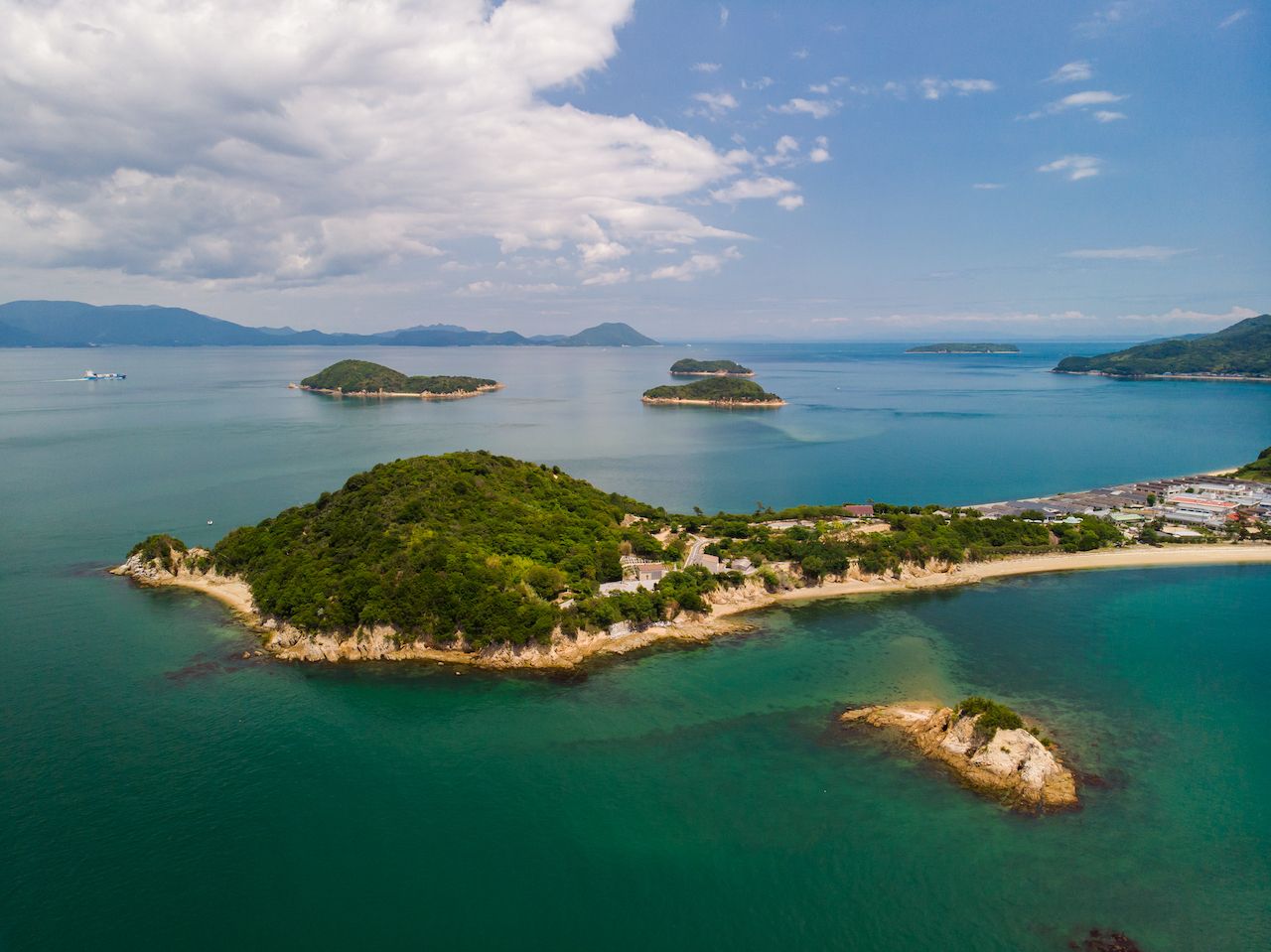 Takamatsu in Shikoku is a popular stop-off point for travelers, with plenty of accommodation options and boats to the major islands. If you stay here, be sure to slurp up some udon noodles; they are a specialty in the local prefecture, Kagawa.

Uno, a port city situated on Japan’s main island, Honshu, is only a 20-minute ferry ride from Naoshima and is equally popular with visitors staying near the art islands. Both cities are accessible by plane or bullet train from major cities like Tokyo, Kyoto, Osaka, and Hiroshima.

Benesse Art Site information can be found on their website (opening times, closed days, and ticketing information). Setouchi Triennale information can likewise be found online. Note: Outside of the Triennale season, limited artworks may be available on non-Benesse islands. Oshima artworks are usually open on the second Saturday and Sunday of each month.