Our need to protect the natural world has never been clearer. While a pandemic borne from wild animals has shown us the dangers of habitat destruction, the collapse of travel has exposed the limits of relying on tourist revenue to protect wild spaces. At the same time, populist leaders continue to attack our public lands, and a growing global population puts pressure on land resources. 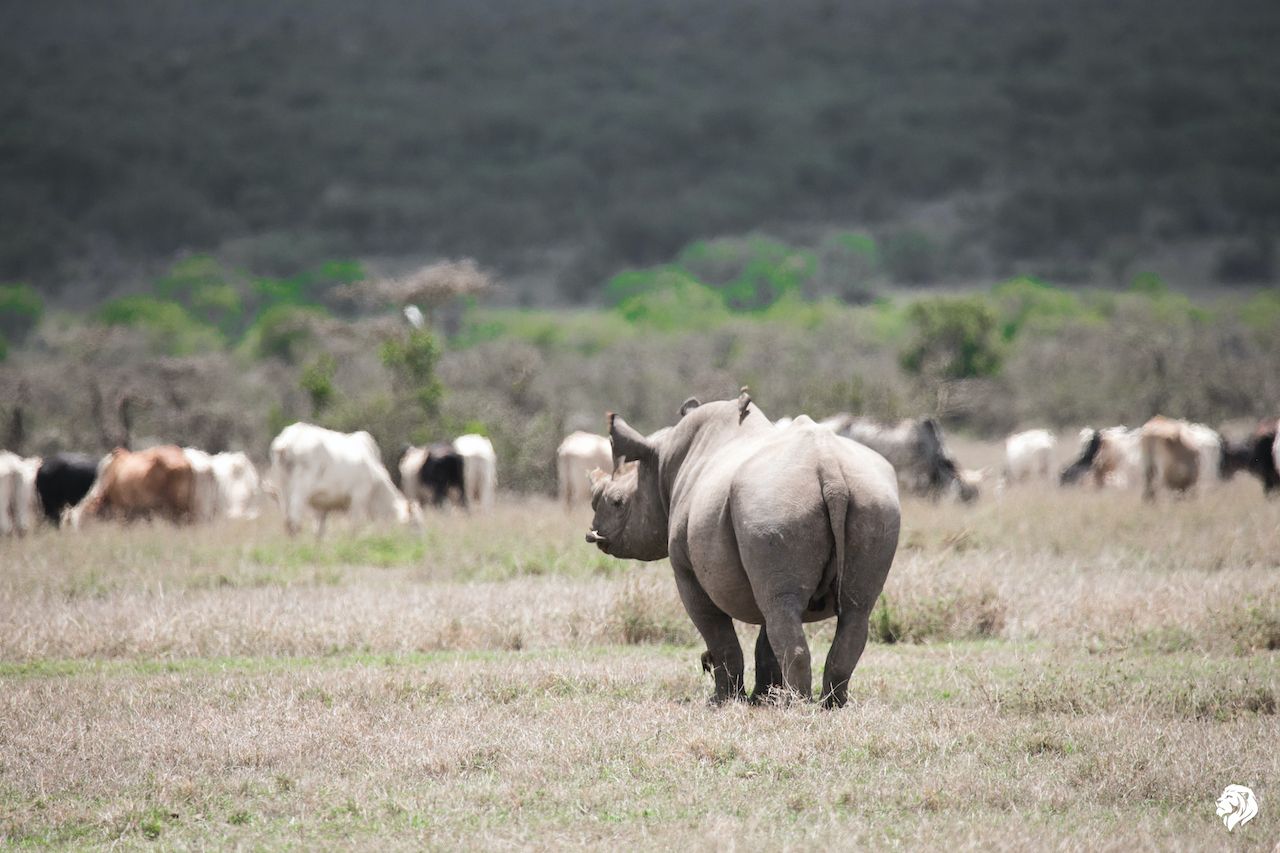 One of the leading practitioners of integrated land management is Kenya’s Ol Pejeta Conservancy, which is home to the last two northern white rhinos in the world and has the region’s largest collection of black rhinos, in addition to lions, elephants, giraffes, zebra, and host of other wildlife. At the same time, Ol Pejeta is a working cattle ranch, raises crops, and is continuously exploring new ways to meet the needs of the local community.

Matador spoke with Ol Pejeta’s Managing Director Richard Vigne about their approach, which has become a model for other conservancies in the region and has even attracted international attention. As he explains it, integrated land management addresses several issues.

“We’ve always known that tourism is a really fickle business, particularly in this part of the world. And that if you’re going to build your business on tourism, you’re going to be subject to these unpredictable shocks,” says Vigne. Even before the pandemic halted travel to Africa, putting conservation efforts there in peril, Vigne says the integrated approach was a ”risk-management strategy” to provide “at least some income when tourism disappears.”

On a more fundamental level, though, Vigne says that he looked at the reality of their location. “There’s another philosophical reason for it, which is probably more important in many respects. We live in a country which is relatively poor, where there is a rapidly growing population, where there is a lack of formal job opportunity, and where the vast majority of people depend upon the land, and their ability to use the land for their existence. So pressure for land in this country is big and getting bigger,” says Vigne.

Add to that genetically modified crops, and Vigne says that land that was once not considered suitable for agriculture now is — including the 110,000 acres that Ol Pejeta occupies. But by growing cattle on Ol Pejeta and protecting wildlife, Vigne says his not-for-profit commercial activities generate revenue on which he pays taxes. He says this gives Ol Pejeta “political legitimacy,” since they are making the land productive while safeguarding wildlife.

He also employs 1,000 people, rather than the 400 he says he’d employ in wildlife tourism alone. He concedes that there are compromises to doing two seemingly unrelated endeavors — ranching and wildlife conservation — in the same space. But the tradeoff is worth it. 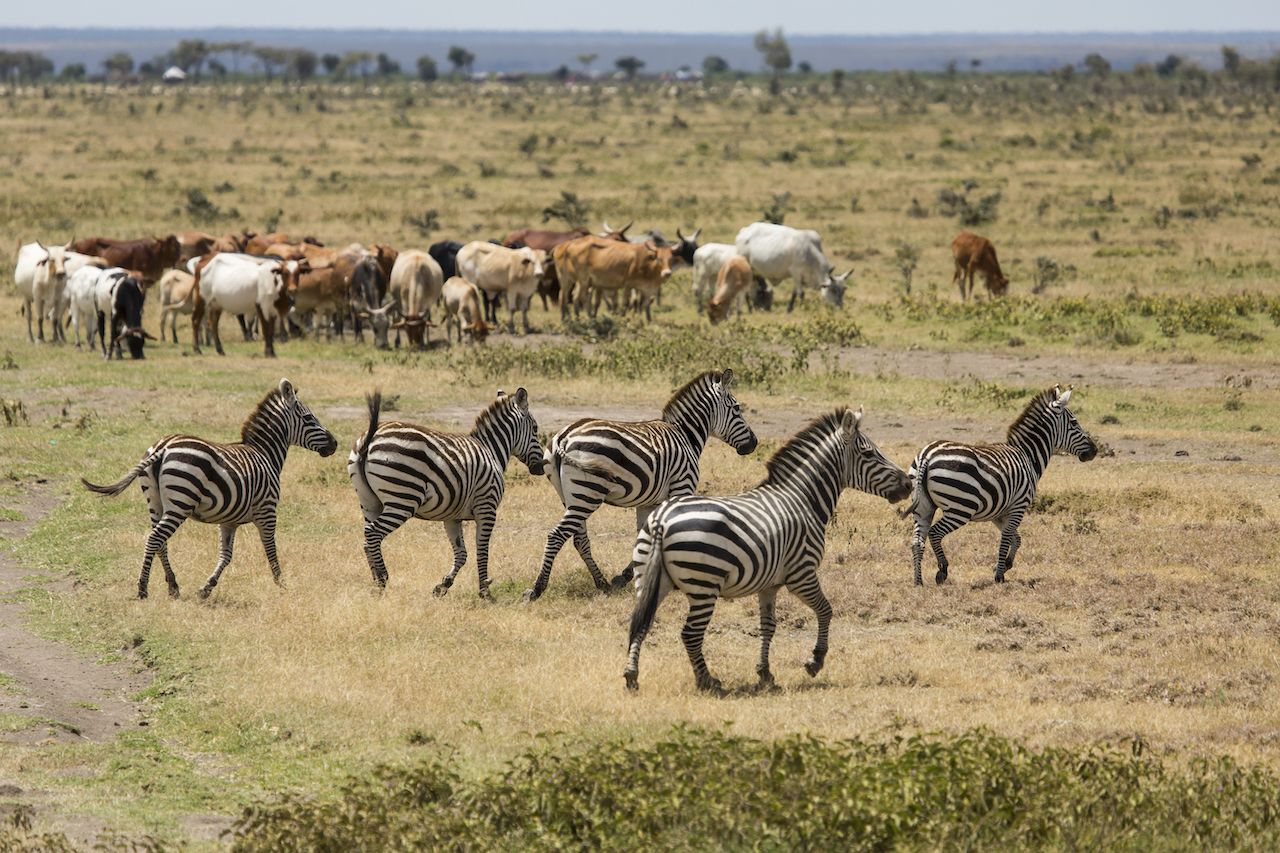 “Our cattle ranching is not nearly as efficient as it would be in the absence of wildlife, and our tourism is probably not as good as it could be. There’s likely to be people who don’t come here because there’s cattle,” explains Vigne. “But if you put the two together, even with those compromises, you end up in a much more productive and profitable situation than normally you would do in an either/or situation.”

The biggest tradeoff is the need to protect the cattle from hungry lions and hyenas. Livestock must always be accompanied by a herder, who ensures they stick together and don’t stray into the almost certain jaws of a predator. While this adds an additional cost, other aspects of safeguarding cattle have yielded unexpected benefits.

To cohabit with lions, Vigne says the key was to understand the felines’ psychology. Lions hunt at night. Likewise, they are weary of water buffalo, which defend themselves aggressively. The solution, he says, is to round up the cattle at night and keep them close together in movable enclosures. While depriving cattle of the opportunity to graze 24 hours a day has its costs, Vigne thinks these are limited.

Maintaining cattle, which look and smell somewhat like water buffalo, tightly herded like their wild cousins, dissuades lions. More notably, Vigne says that by huddling in a small space, the cattle churn up the soil and create mud. Normally, this might not seem desirable, but by doing so selectively — placing the cattle where rank old grasses are preventing regrowth — they can solve a problem that in the past was addressed by burning. Burning, Vigne explains, kills land-dwelling species and harms acacia trees, an important food source for giraffes and rhinos. 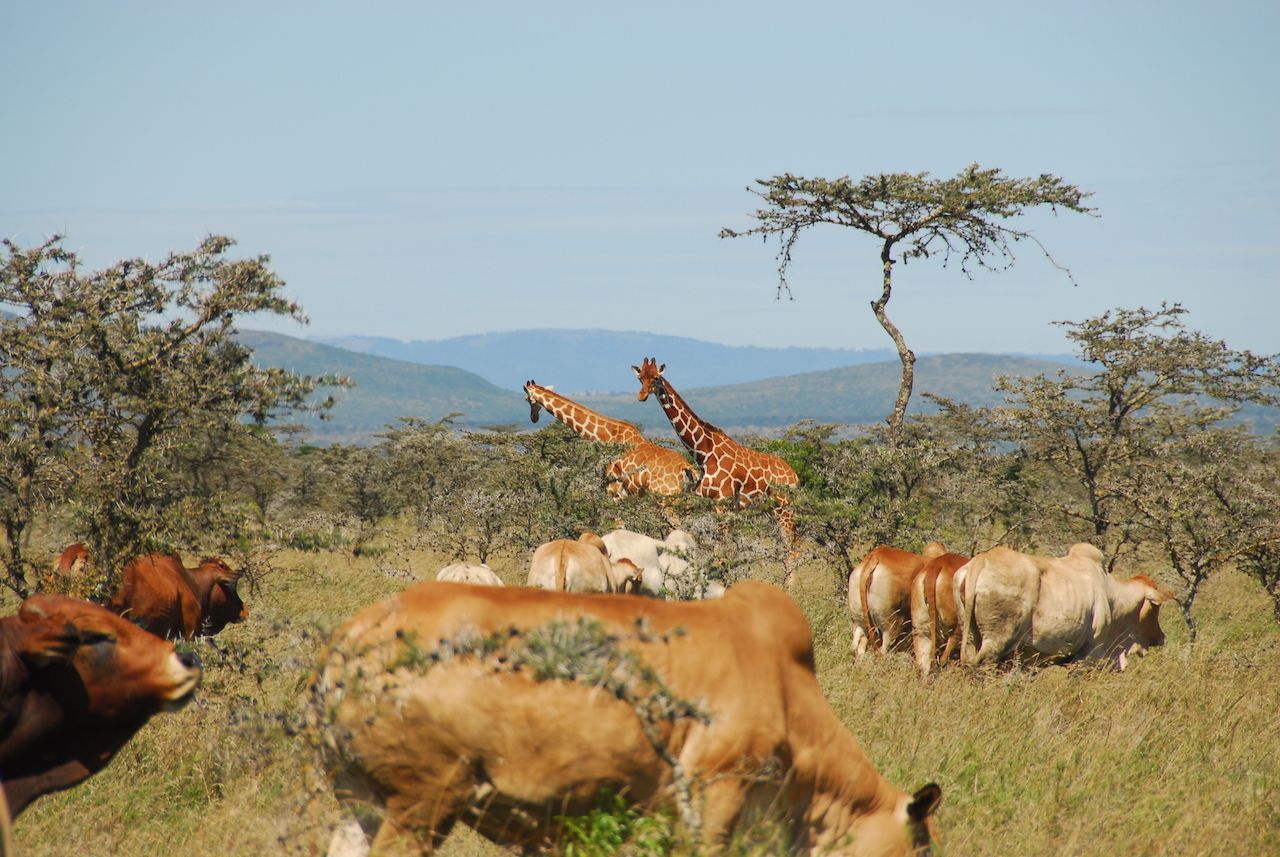 Moreover, the cattle are adding manure to the newly bare areas, thereby enriching the soil. What grows thereafter, says Vigne, are grasses of the cynodon family, “which is a highly palatable, very nutritious species of grass, which is really favored by wildlife and cattle alike.” That, in turn, helps nourish the wildlife that you need to have plenty of in order to sustain lions and hyenas, and to keep them away from your cattle. Vigne estimates that Ol Pejeta has around 70-80 lions — out of about 1,000 in the entirety of Kenya.

“Now we’ve sort of realized that, actually, if we use cattle properly, we can enhance the quality of the conservation space that we’re providing,” says Vigne. In fact, the method of ranching and growing crops more thoughtfully, relying on natural processes, is part of a movement towards regenerative agriculture. There are additional win-win aspects to Ol Pejeta’s management practices — including attracting disease-causing ticks to cattle, where they are sustainably managed, therefore diminishing their harmful presence in the wild.

The most important end result, however, is that it reduces the “opportunity cost” of using the land for wildlife alone. Vigne says that in order to keep a healthy wildlife ecosystem intact for elephants and other migrating animals, it’s estimated that about 20 to 25 percent of Kenya’s land needs to be kept open to wildlife.

Currently, national parks occupy only seven percent of Kenya’s land — and setting aside another huge chunk of land solely for conservation is not politically viable. Enter private conservancies like Ol Pejeta. Critically, Vigne says these conservancies shouldn’t rely for their survival solely on revenues from tourism, now on hiatus, or even donors.

“Philanthropy will still play a massive part,” believes Vigne, but he adds, “There’s not enough philanthropy in the world to pay for all the conservation that needs to happen, so it’s imperative that we find other models and other ways of generating revenue to pay for the cost of conservation.” By opting for the integrated land management approach, conservancies can work towards economic self-sufficiency.

“And the importance of that is that it’s replicable,” says Vigne, noting that the integrated land management approach is gaining adherents in that part of Kenya. “What’s happened is this kind of system has allowed land to remain productive, at the same time as safeguarding conservation space. And it’s land that otherwise would have probably been converted slowly to cropland, or could in a worst-case scenario be lost to conservation through the appropriation by government to service the needs of its people.” 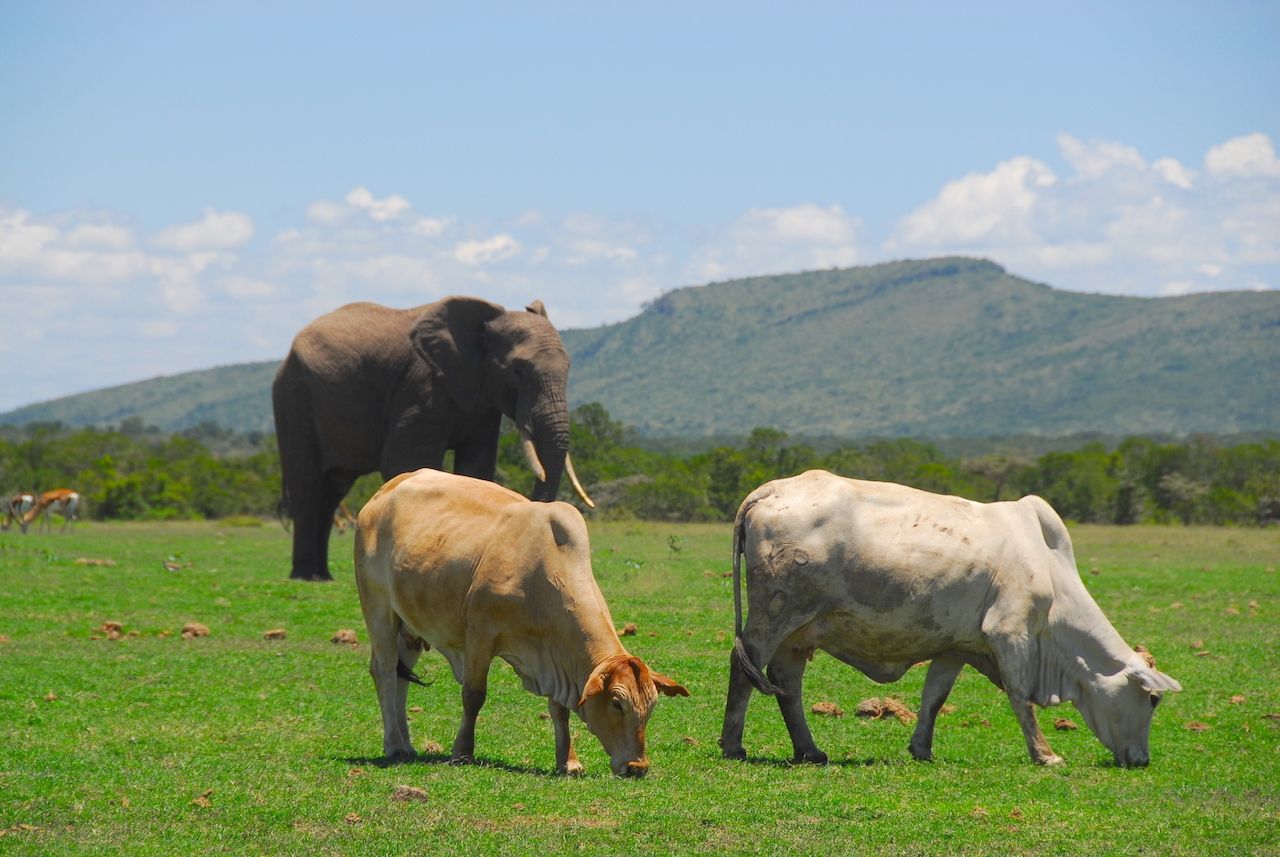 Some time ago, Vigne says the environmentalists on Ol Pejeta’s board would bristle at the idea of operating the conservancy as a commercial enterprise, albeit one that plows profits back into conservation.

“When you talk to them about profit, they think it’s like a dirty word. And you start talking about business, and well that’s not compatible with conservation, and business is the enemy. Well it’s not. It’s just the way you do business,” says Vigne.

Nowadays, Ol Pejeta’s approach has attracted attention across the country and even as far away as Brazil and the United States. Representatives from Yellowstone National Park came to visit Ol Pejeta a couple of years back, hoping to take some of the lessons back to Wyoming – where they want to persuade sheep farmers to coexist with the increasing numbers of wolves in the area. While Vigne is not sure the Yellowstone initiative went anywhere, he is certain that within Kenya, the integrated land management model is growing.

“I do think in this country it’s changing and rapidly,” says Vigne of the old mindset that saw commercial pursuits and wildlife preservation as incompatible. “People are realizing that it’s a good model, and it’s working, and tourism offers a real opportunity here when it’s going well. So if you can have wildlife, then you might as well have it.”

The reality is that we may have no choice. Our planet depends on us to preserve biodiversity, yet the population is set to increase to nearly 10 billion in the 30 years. An approach that preserves natural areas is essential.

“I think over the the next five to 10 years, Kenya’s going to be seen to be a real leader in the creation of a model that allows for sustainable land use without the kind of extremes you see in other parts of the world, where wildlife of all forms, including insects, is completely extirpated in order to make room for people and farming and so forth.”

And when tourists come back, Ol Pejeta will be ready to welcome them as well. Although there will always be a few people who would rather not see cattle on their safari, Vigne says most aren’t worried about that.

“We talk about the compromises, but we are the biggest black rhino sanctuary in eastern central Africa. We have some of the highest predator densities in Kenya,” says Vigne. “It’s not as if we’re really compromising all that much. So people really do see those species when they come here and, as long as that happens, I think that most people are happy.”