In the United States, mayonnaise is often relegated to foods like potato salad and deviled eggs. But for those who love Japanese food, one specific type of mayonnaise can do so much more: Kewpie mayo.

Though Kewpie has been available for years, a viral ramen hack that took off on TikTok earlier this year put the social-media spotlight on the iconic Japanese condiment. The videos center on teaching home cooks to elevate their instant noodles by incorporating a beaten egg, minced garlic to taste, and a dollop of mayo. When combined slowly with the starchy cooking liquid, the mixture emulsifies, creating a rich, creamy broth using the same technique behind pasta carbonara’s glossy sauce, explains Sarah Kasai, sous chef at the Bay Area’s popular Ramen Shop.

Kasai has yet to try the hack, but she knows as well as anyone that Japanese-style mayonnaise is the secret to this dressed-up ramen recipe. Growing up, she remembers noting the differences between the Kewpie mayonnaise her bāchan, or grandmother, stocked and the Best Foods mayonnaise her mother always bought.

“It was funny as a kid realizing, ‘Oh, yeah, this mayonnaise that bāchan uses tastes way better,’” she tells me over the phone, adding that Kewpie is now a staple in her own household.

Kewpie mayonnaise is as ubiquitous in Japan as Best Foods mayonnaise is stateside. Brand founder Toichiro Nakashima began manufacturing the condiment in 1925 after sampling American-style mayo on a trip to the US. His aim was to create a nutritious, protein-rich spread that paired well with vegetables to promote healthy eating in Japan.

The recipe follows the same basic formula as any mayo: It’s a simple emulsion of egg, oil, and acid. Rather than using whole eggs, however, Kewpie uses just yolks (four for every 500 grams to be exact) and swaps white vinegar for rice vinegar or apple cider vinegar. This results in a thicker, yellower mayonnaise than the typical American-style mayo.

A novelty at the time, Nakashima’s recipe is now a Japanese staple. It’s used to top street foods like okonomiyaki (savory cabbage and egg pancakes), takoyaki (octopus balls), and yakisoba noodles. It’s a key ingredient in tamago sandos, the egg salad sandwiches famously sold in convenience stores throughout Japan. Mayonnaise might also be found in salad dressings, used as a dipping sauce, and served with fried chicken or non-traditional sushi rolls.

In 2017, Kewpie even opened two pop-up cafes in Tokyo and Nagoya to serve mayo-based dishes, from omelets to custardy sweets. 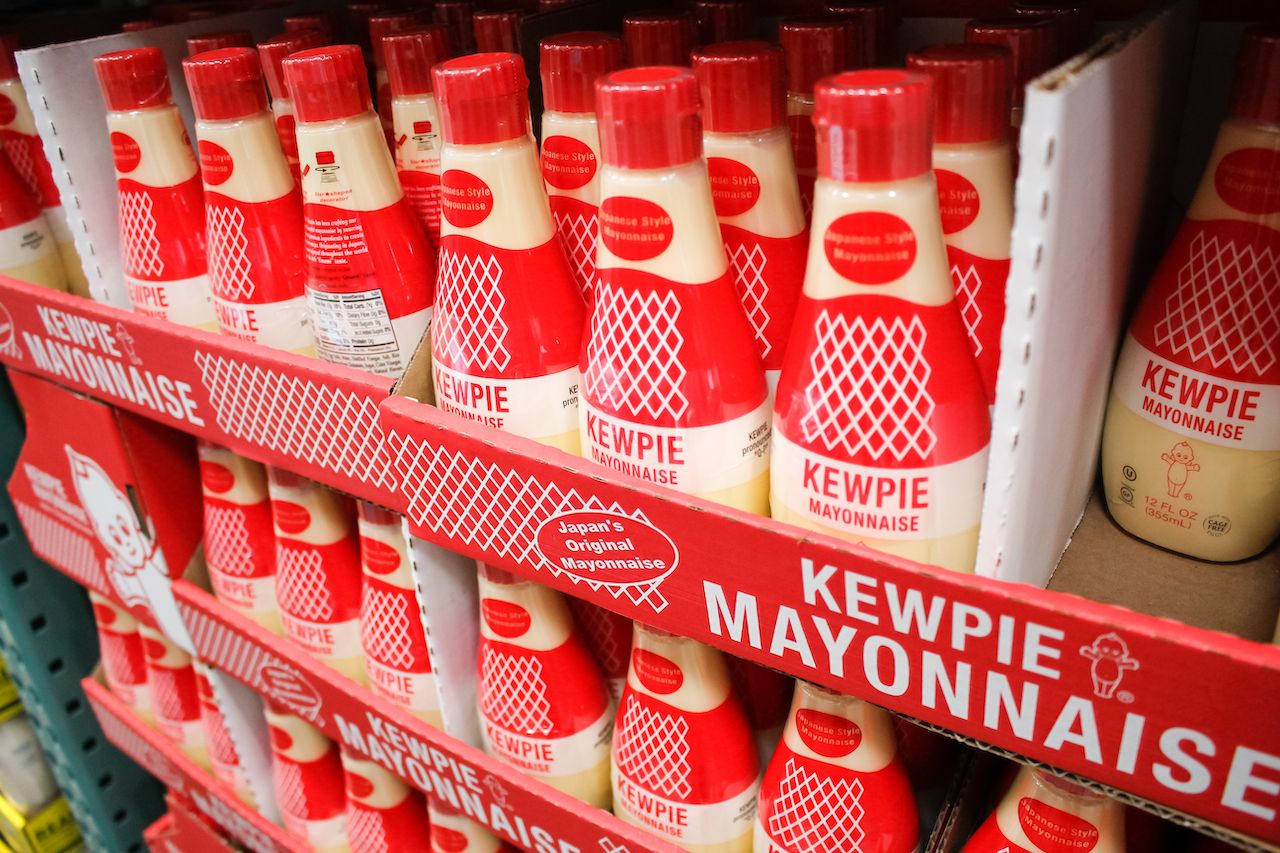 Americans are catching on to the wonders of Kewpie mayo. 2017 marked the launch of Kewpie’s made-in-USA mayonnaise, which garnered mixed reviews. Misconceptions surrounding MSG prompted the company to trade the seasoning for yeast extract in the American version, much to the chagrin of many fans of the original recipe.

Even before this latest ramen hack went viral, the condiment had a cult following stateside, so much so that there are Kewpie Halloween costumes. The red, white, and Kewpie-colored squeeze bottle is hard to miss, with a signature baby doll logo that was inspired by Kewpie figures of the 20th century. (Kewpie dolls originally made their debut as cartoon characters in a US comic strip in 1909.)

If you’re a fan of instant ramen, Japanese cuisine, or mayonnaise in general, keep an eye out for the Kewpie branding next time you’re stocking up on condiments. Better yet, take a trip to your nearest Japanese or pan-Asian market to make sure you’re getting the good stuff, MSG and all. But be warned: You might never settle for American mayo again.

Spirits + CocktailsYou’re Drinking Sake Wrong. Here’s How They Do It in Japan.
Tagged
Food + Drink Japan
What did you think of this story?
Meh
Good
Awesome