It shouldn’t come as a surprise that, in Italy, spirits (or “liquori” as the locals call them), are essential on drink menus at trattorias, osterias, and bars. Some of the most notable among the various bitter amari are the many regional “cello” liqueurs.

Limoncello — a liqueur made from lemons that’s traditionally produced in Capri, the Amalfi Coast, and Naples — is the most popular and well- known of these “cello” liqueurs. The not so secret ingredient to a good limoncello is the sfusato amalfitano lemon, which grows in the Campania region of Italy. The large, sweet, thick-skinned, and wrinkly lemons are unlike any other in the world.

The origin of the limoncello is muddled. The most common story, though, is that Maria Antonia Farace made the original limoncello using lemons and oranges from her garden and served it at a small Inn in Capri at the beginning of the 20th century. After World War II, her grandson opened a restaurant where the draw was his homemade limoncello using his nonna’s recipe. There are other origin legends, too, including one which claims monks were the first to drink limoncello as a simple pleasure between prayers.

Though limoncello is the most famous, it’s far from the only liqueur made in this style. There’s an abundance of fruit and plant-based liqueurs to try in Italy made from ingredients like strawberries, pistachios, and whatever else is regional and readily available. Some have “cello” in the name, while others lack the suffix but have the same sweet and naturally flavored taste. Each has a specific method of production and set of ingredients that sets it apart, but the basic concept behind each of these Italian liqueurs remains the same. These are 10 of the best regional versions to try on your next trip to Italy. 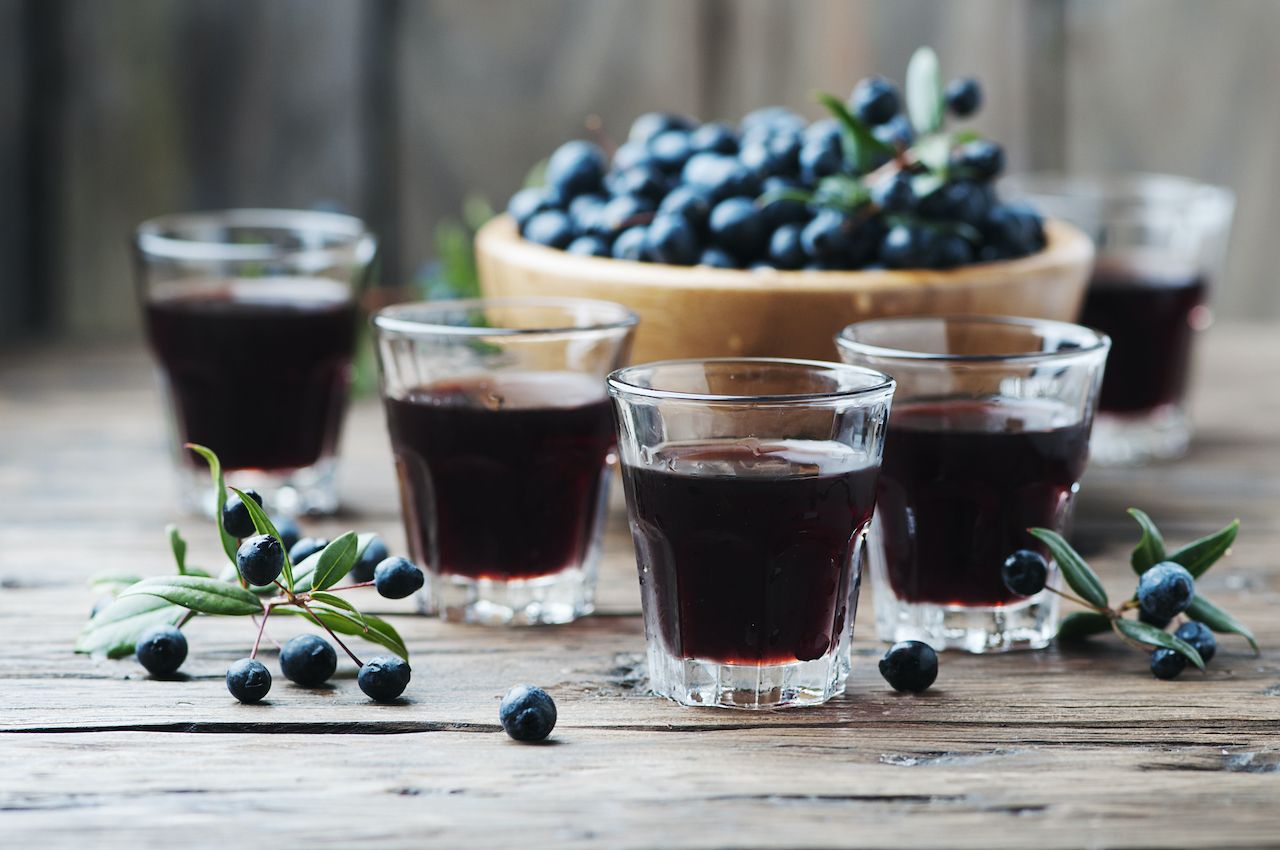 The deep burgundy-hued mirto liqueur is a specialty of Sardinia, and it’s enjoyed around southern Italy and on the islands of Capraia and Corsica. It’s made by macerating red myrtle berries in alcohol for a tangy, bitter-sweet myrtle liqueur that has a sweet and pungent aroma. Sometimes the leaves from the myrtle plant are also thrown into the mixture, which adds an herbaceous flavor. Historically, mirto is homemade, though in recent times a handful of artisanal labels have made its way to bars.

Fragoline di bosco, the tiny wild strawberries that grow throughout Italy, are the key ingredient of this spirit. In the Lazio, Emilia-Romagna, and Campania regions, these sweet wild berries are infused into a neutral spirit for about a month, lending fragrant strawberry flavors. Then this ruby red and fruity liqueur is often rested for 60 days. 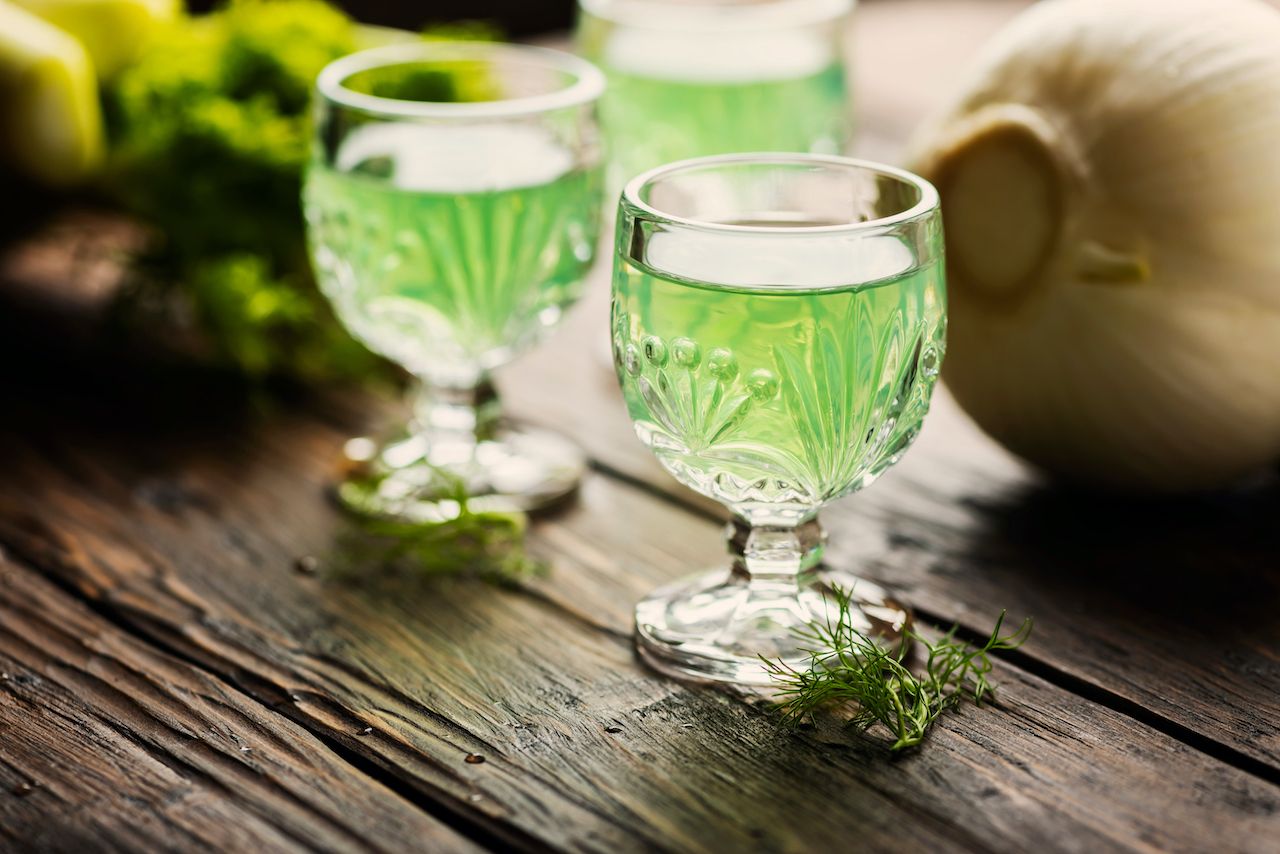 This liqueur gets its mellow flavor from the wild fennel that grows along the rocky coast of Puglia. A cherished drink in the countryside of southern Italy, the light green finochietto is a celebration of fresh and aromatic fennel. The flavor is vegetal with hints of fresh anise. Countless cocktails are shaken with finochietto, but it’s often consumed as a digestif. Legend says that Roman warriors drank finocchietto to keep their bodies strong.

Even people with a minimal level of familiarity with Italian cuisine know that Italy its famous for its fragrant, flavorsome basil. It makes appearances on pizza and bruschetta, as well as a “cello” liqueur that highlights this famous plant. Basilcello liqueur calls for fresh basil, neutral grain alcohol, sugar syrup, and lime peels. Lime adds sour notes to this sweet and herbaceous digestif that is believed to have indigestion relieving qualities. 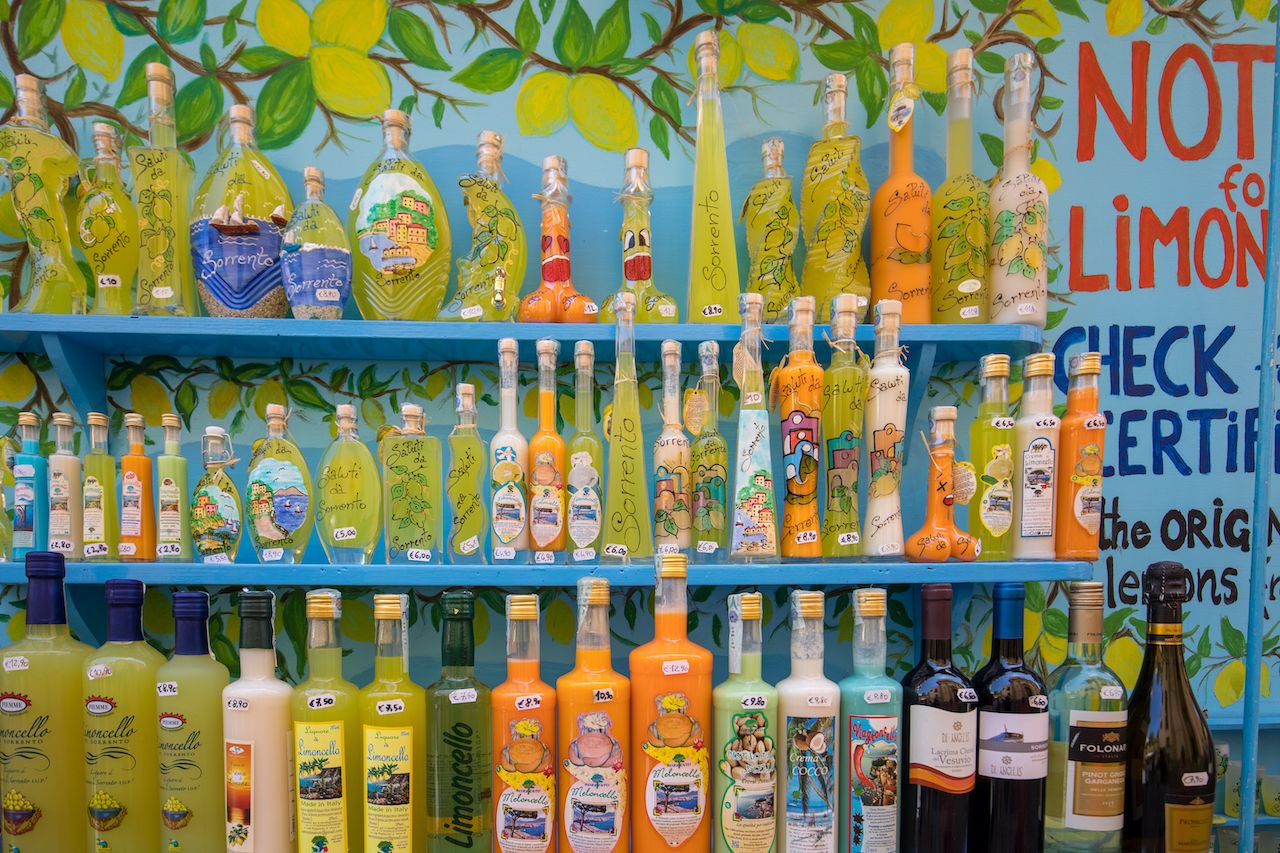 Aromatics like cinnamon, vanilla, and cardamom are used in this orange-flavored liqueur. The blood oranges that produce arancello are grown in Sicily, but sometimes the liqueur itself is industrially bottled outside the country. For instance, Zott Distillery, in Ustersbach, Germany, manufactures its own version of arancello. It’s best sipped rather than thrown back in one gulp, like the others on this list, and arancello is sometimes also drizzled over fruit salad or vanilla ice cream. The araneroni (a negroni made with the orange liqueur) is one way to integrate this liqueur into a cocktail.

This artisanal liqueur gets its flavor from espresso, barley, and 15 other herbs, aromatics, and spices like star anise and juniper. It’s origins aren’t exactly clear, but one story claims that it was invented by the nuns of the Convent of Pucara in Tramonti, a hilly town on the Amalfi coast. Traditionally, espresso and barley are roasted for a very specific 28 minutes before being mixed with alcohol that has marinated with the other ingredients for 40 days. This dark-hued Italian liqueur is both sweet and bitter, offering hints of licorice, vanilla, and chocolate. 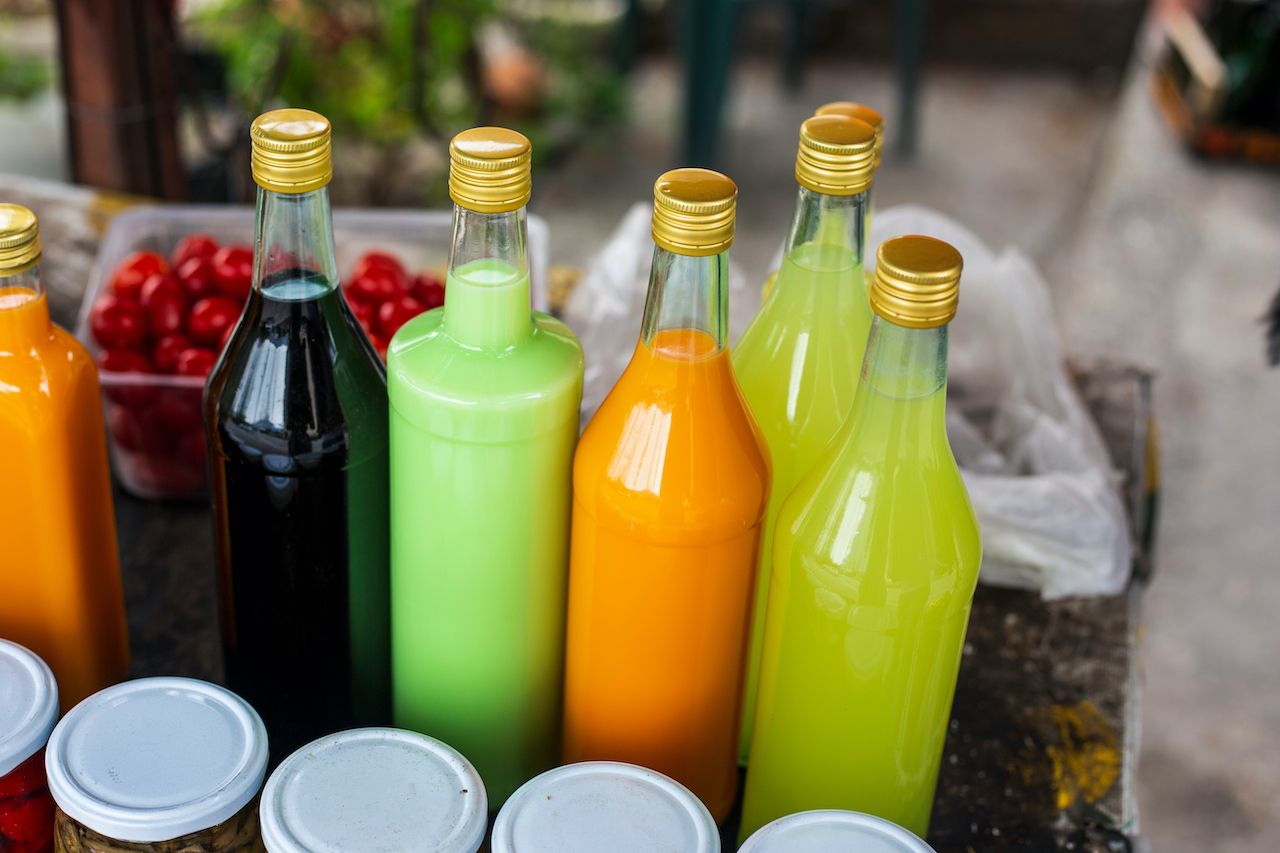 The creamy-smooth pistachio-flavored liqueur is a celebration of the pistachios grown in the Sicilian village of Bronte. Pistachiocello is sometimes known to Italians as “green gold.” The kernels are ground down and infused into the alcohol, resulting in a creamy, aromatic liqueur. The texture is thicker and the appearance more opaque than other Italian liqueurs, while the flavor is sweet, savory, and nutty.

Along the entire coast of Amalfi, Salento, and Cilento, prickly pears (fichi d’India) grow wild and are typically harvested in August. This bright yellow and exceptionally sweet liqueur is made by infusing those macerated prickly pears in alcohol, and it’s traditionally served by wealthy families on special occasions. Today, nanassino is almost exclusively homemade, and it’s usually served cold. 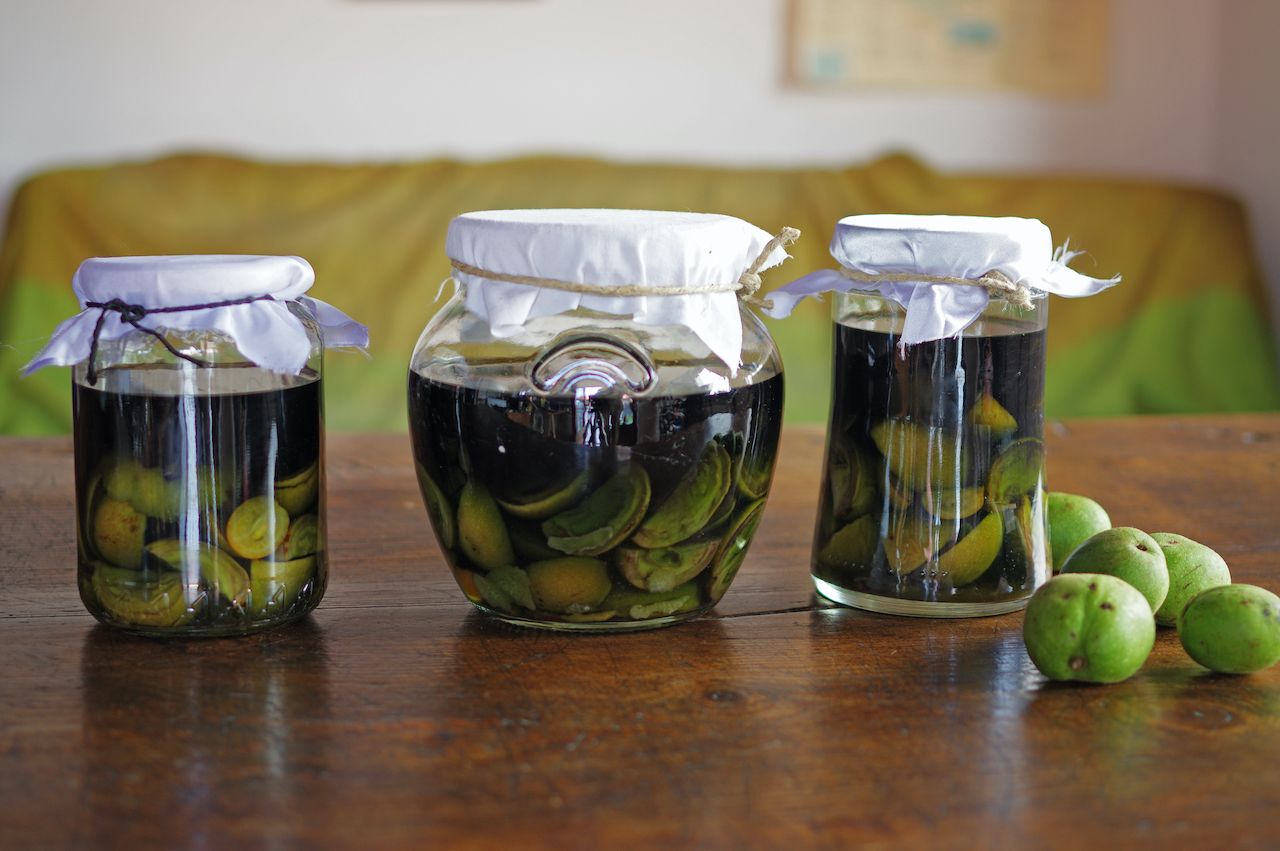 The bittersweet liqueur originates in the Emilia-Romagna region of northern Italy. It’s made by infusing a neutral spirit with unripe walnuts that are still inside their green husks for about a month alongside ingredients like star anise, vanilla beans, cinnamon barks, orange peels, and cardamom pods. Saint John’s Day, on June 24, heralds the Italian tradition of walnut picking and the subsequent preparation of nocino in many Italian homes. Traditionally, nocino is enjoyed as an after-dinner digestif, but it’s also a welcome addition to a Manhattan cocktail.

This ruby-red liqueur is made from wild cherries grown around Torremaggiore in the Puglia region. Macerating the cherries in alcohol infuses the liqueur with the flavors of wild berries, which is paired with the bitterness of almonds. According to the Mirinello website, the company responsible for commercially producing the liqueur, Mirinello was established by the Lippi family and production follows the traditional recipe originally conceived by Don Carmine Antonio Lippi in the 19th century.