Many drinkers are familiar with Italy’s beloved wine culture. Many people have also tried, ordered, or at least seen an Italian espresso or other coffee drink. What many in the United States overlook is the massive influence of spirits and liqueurs that make up Italy’s aperitivo and digestivo culture.

Admittedly, it’s not always easy to define what constitutes an aperitivo drink and what constitutes a digestivo (also commonly known stateside by the French version of the words, aperitif and digestif). The beverages widely fall between 15 and 60 percent alcohol by volume, but beer can sometimes be included as well. Aperitivi (the plural of aperitivo) generally have more acid and bitterness, though bitter amari are an important category of digestivi (the plural of digestivo). There is one clear rule, however: If you drink it as a light pre-meal drink then it’s an aperitivo, and if you linger over it after dinner with friends and family then it’s a digestivo.

“Beverages are not meant for the five seconds of drinking them in Italy, but for what happens after,” says Livio Lauro, an Italian spirits expert, author, and cocktail educator who grew up in southern Italy. He now lives in Las Vegas and recently hosted a virtual tasting of spirits over Zoom. Lauro talked about history and drinking, culture, and traditions. Through it all, the clearest sentiment is that Americans need to incorporate more aperitivo and digestivo in their lives.

There are a number of reasons why people in the US haven’t picked up on the aperitivo and digestivo customs like the Italians, French, and others. Prohibition is in part to blame because many fine-dining restaurants that incorporated pre- and after-dinner drinks had to shutter without the income from high-profit margin alcohol sales. Then there’s the puritanical, socially conservative atmosphere of the US in general that positions alcohol as a vice used to get drunk rather than a cherished element of a complete meal.

Attitudes have somewhat shifted with the rise of the US as a respected wine region, as well as the craft cocktail and craft beer industries. Still, for the most part, Americans might benefit from experiencing more pre- and post-meal beverages. 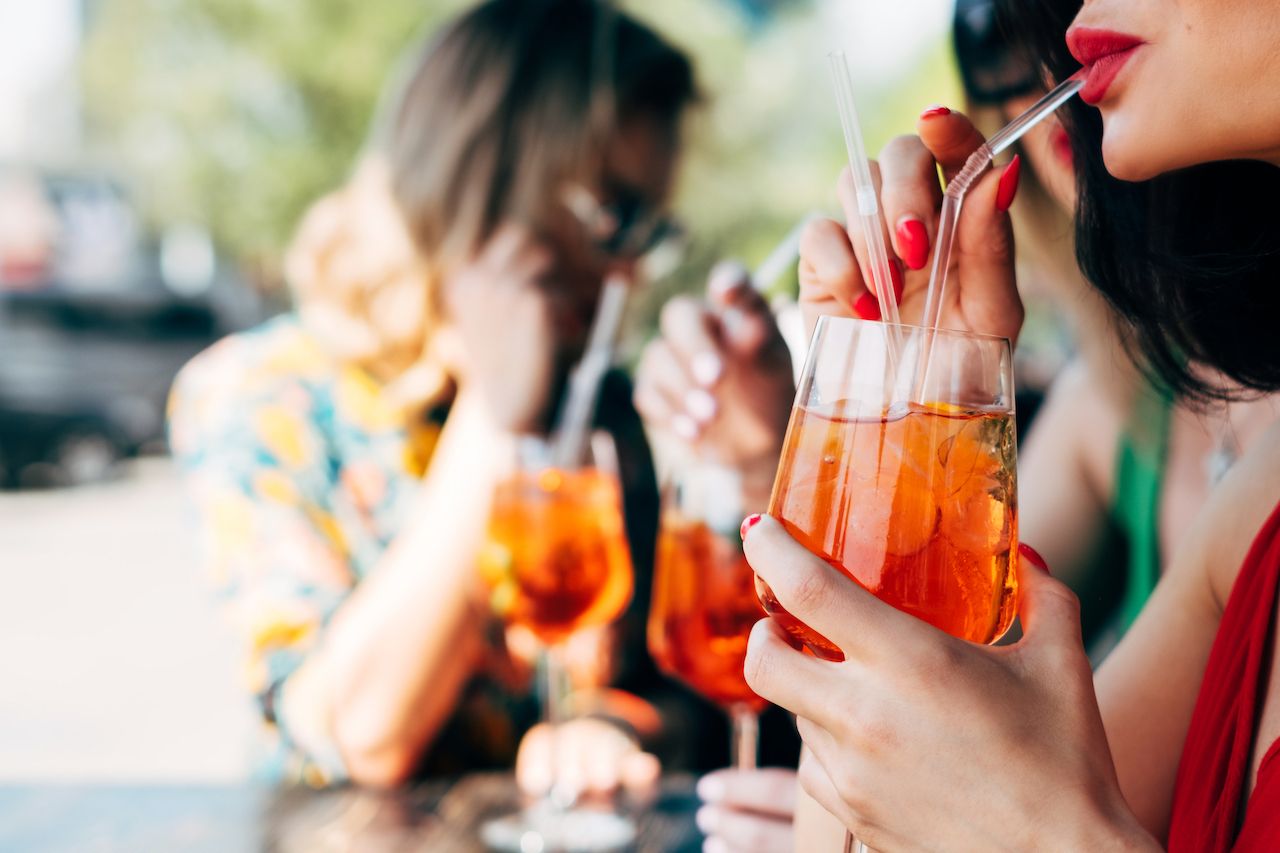 An aperitivo comes from the Latin word for “opener.” The name describes its function as a pre-meal beverage that stimulates the appetite and kicks off conversation. In Italy, a small snack usually comes with the drink free of charge during aperitivo hours between around 4:00 and 7:00 PM.

The drink itself can be many things, including vermouth, a light cocktail, Prosecco or other sparkling wine, or beer. Outside of beer and wine options, the selection generally falls into two broad categories: aperitivo liqueur and bitter liqueur. Both are wine or spirits infused with citrus, herbs, and a sweetener. Aperitivo liqueur is generally lower in alcohol while bitter liqueur is a little stronger and, as the name suggests, bitter.

These are the best types of aperitivi to try.

Cocktails: Italian cocktail culture isn’t as prevalent as it is in the US, but there are a few notable exceptions when it comes to aperitivo hour. Ideally the cocktail is not too strong and not too sweet so it doesn’t ruin the meal ahead.

Aperitivo cocktails to try: Negroni (gin, vermouth, and Campari) and the many varieties of spritzes (a mixture of a light amari like Aperol, Prosecco, and sparkling water)

Vermouth: When people drink vermouth stateside, it’s typically mixed into cocktails like the martini, Manhattan, and Rob Roy. In Italy, however, it’s not unusual to sip it on its own or in a simple spritz. Vermouth is a wine fortified with a liquor (often brandy) and flavored with herbs, spices, and various plant roots, barks, and seeds. A little sugar is added to vermouth as well. All of this makes it somewhat like a cocktail in itself in that it has the main components of alcohol, bittering and flavoring agents, and a sweetener. The first modern vermouths were made in Turin in the mid- to late 18th century, and today styles are divided between sweet, dry, extra-dry white, sweet white, rosso, and rosé.

Vermouths to try: Cocchi Storico Vermouth di Torino (a sweet red vermouth with notes of kola, chocolate, menthol, and citrus) and Cocchi Americano (a white vermouth dating back to 1891 infused with cinchona bark, citrus peel, wormwood, and other botanicals)

Rosolio: This Italian liqueur gets its name from the sundew plant (Latin: ros solis), which grows in bogs and eats insects. It’s not to be confused with liqueurs infused primarily with rose petals, though that doesn’t mean roses can’t be one of the many plants, herbs, and citrus fruits added to a rosolio for flavoring. The exact mixture, like many infused beverages in Italy, depends on where it’s from — Campania is famous for its lemon-based rosolio, for example, while Tuscan producers often use juniper.

Rosolio to try: Italicus, which is a rosolio de bergamot made with chamomile and ginseng that tastes like candied lemon and lavender. 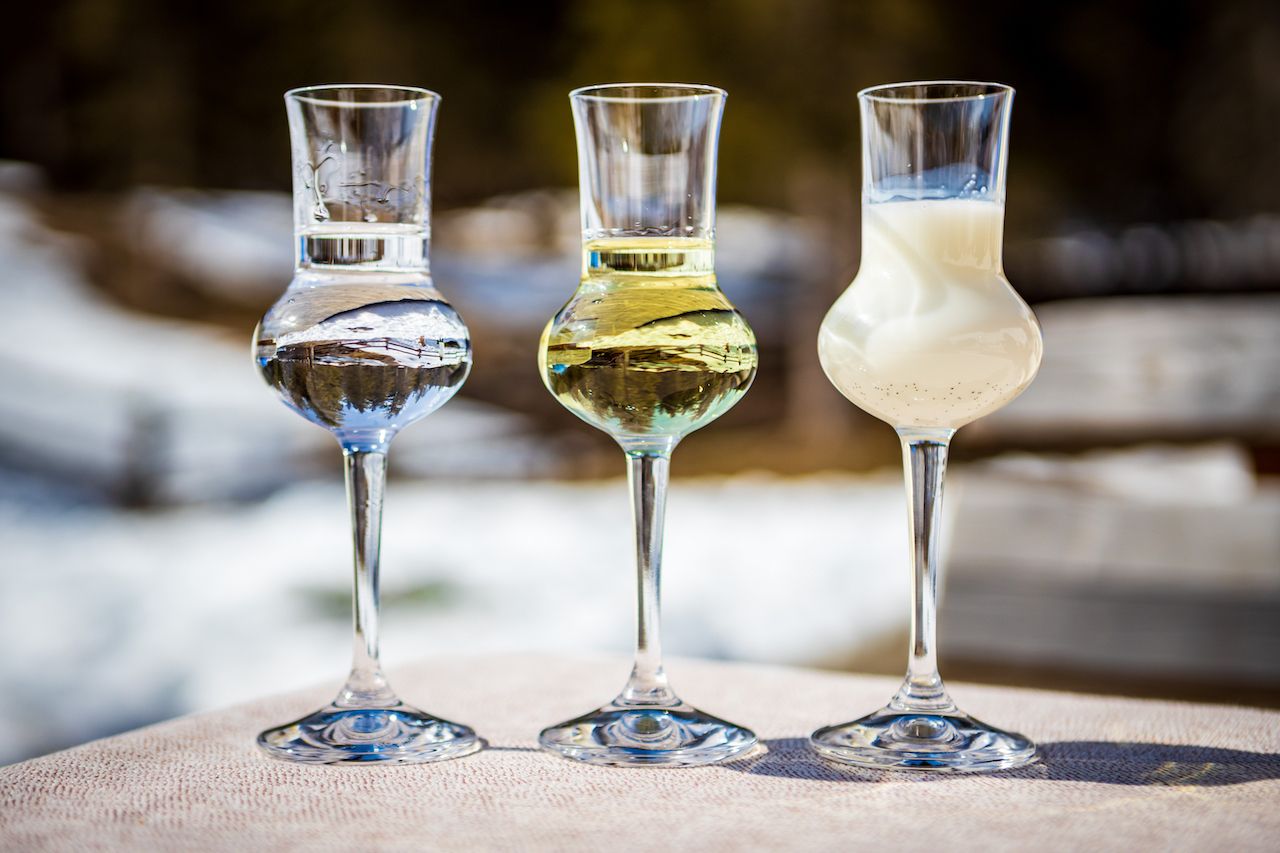 The purpose of the digestivo, like the aperitivo, is in the name. Digestivi are drinks that supposedly help you digest. While you shouldn’t turn to the bottle after a long, lingering, multi-course Italian meal for actual digestion aid, an after-dinner drink serves an important purpose: to extend the time spent with the friends and family you just shared a meal with.

These are the best types of digestivo to try.

Grappa: A type of brandy that’s made from the grape skins, seeds, and stems left over after the grapes are crushed for their juice. Those skins and stems are called the pomace, and it takes a special distillation to turn the solids into a spirit between 35 and 60 percent alcohol by volume. Grappa is sipped on its own in a small glass or mixed with espresso for a caffe corretto (“corrected coffee”). Another common way to drink grappa as a digestivo in northern Italy is to put a little in the cup of your finished after-dinner espresso, swirl it to pick up all the leftover coffee and sugar, and drink it as an ammazzacaffè (“coffee killer”).

Grappa to try: Poli Grappa, a spirit that comes from a distillery that dates back to 1898 and has fragrant raisin notes

Limoncello and other fruit liqueurs: Limoncello is a spirit, often brandy or vodka, that’s steeped with lemon peel and sweetened. It’s produced primarily in southern Italy, especially around Amalfi, Naples, and Sorrento, as well as the islands of Capri, Ischia, and Procida. Other similarly made fruit liqueurs include fragolino, made with strawberries, and peachello, made with peaches. There’s also mirto, a liqueur made from myrtle bush berries primarily on the islands of Sardinia and Corsica.

Italian fruit liqueurs to try: Though most Italian limoncello is local and not widely distributed, Arvero and Caravella are easy enough to find

Sambuca: A clear anise spirit. The flavor is somewhat like licorice, and it’s served neat or as a con la mosca (“with the fly”) with three coffee beans.

Sambuca to try: Molinari has been a favorite in Rome and around the world since the post-war years

Nut-flavored liqueurs: There are a number of sweet nut-flavored liqueurs that are sipped neat or chilled. The flavors largely depend on the region you’re drinking from. There are two popular versions: nocello, which is sweet and flavored with hazelnut, and amaretto, which is also sweet with an almond flavor achieved by infusing the liquor with apricot kernels.

Nut-flavored liqueurs to try: Toschi Nocello, which has an intense sweet hazelnut aroma from the moment the bottle is opened and is best enjoyed chilled or on the rocks

Amari: The broad category of amari encompasses just about every level of sweetness and bitterness one can have in a drink. In general, it’s an herbal liqueur made by infusing a liquor with herbs, roots, citrus, and caramel, with alcohol percentages ranging from 16 to 40. There are those that are so bitter they’ll make your toes curl and those that are so light they’re typically thrown into the aperitivi category like Aperol. When consumed as digestivi, however, amari are sipped at room temperature.

The popularity of amari rose in the 1800s, and many of the recipes still reflect Italy’s global influences at that time (Fernet-Branca, for example, uses ingredients from South Africa, China, France, Argentina, and India). Today, bitter beverages reference the Italian preference for bitter flavors across the country’s cuisine. As the saying goes, “cose amare, tienile care,” which means “bitter things, hold them dear.”