In Korea, drinking is an essential element of socializing. It’s an important way to strengthen bonds between friends and unwind from the stress of everyday life, and work colleagues consider an invitation for a night on the town a compliment. It’s understood that, after a couple drinks, you’ll transform into a social butterfly, chatting up your colleagues and friends and maybe sharing a secret or two.

One reason drinking is so popular in Korea is simply because alcohol is so cheap — soju is almost always the beverage of choice, followed closely by beer. The drinking etiquette that accompanies social outings, especially with colleagues, reinforces social hierarchies in Korean society and is designed to encourage excess drinking.

If you want to immerse yourself in the Korean culture, you should know how they drink. This treasured set of rules isn’t so much strictly enforced as it is strongly suggested (especially in modern Korea). Many of these traditions might feel like stodgy rules to outsiders, but in truth they point to much deeper cultural norms of respecting elders and being polite and generous to your friends and colleagues. In Korea, drinking is about so much more than getting drunk. It’s about solidifying friendships and showing appreciation to your colleagues. Here’s what you need to know before embarking on a night out in Korea. Hope you like soju!

1. In general, accept the first glass of alcohol you’re offered.

If an elder offers you a drink at any point in the night, Korea’s cultural hierarchy demands that you accept. But, in the strictest sense, refusing a drink from anyone is the height of bad manners. Denying the drink could insult your companions and put a damper on the evening. That’s why drinking in Korea has a reputation for debauchery: Anyone can offer you a drink at any point, no matter how much you’ve already sipped, and you’re pretty much expected to accept without even batting an eye.

If you’d prefer to not become inebriated, your best bet is to graciously accept the first drink you’re offered. If you don’t want to drink any more after that, say so upfront, and your new friends won’t be offended.

2. Never pour your own drink.

Subtle gestures of respect are paramount in Korean drinking culture, and one of the most significant is never pouring your own drink. Though it might seem like a slightly outdated concept to foreigners, this is the rule you’re most likely to see observed at Korean barbecue restaurants or at the noraebang, a Korean-style karaoke room (where typically only beer is served).

When pouring someone else’s drink, especially an elder’s, hold the bottle with both hands. If your companion sees that your glass is empty, she’ll likely refill it immediately in an effort to be polite, so you can rest assured your glass will never be empty for long. But if you need a break or don’t want to drink anymore, you can leave your glass half full, because only empty glasses will be refilled.

As you may have noticed already, so much of Korean etiquette — both in and outside of the drinking realm — revolves around showing deference to our elders. Remember, an offer to end the workday over drinks with a superior is considered a high compliment. Of course, if you’re just visiting Korea, you might not have as much occasion to go out for drinks with your boss, but these rules also apply to an older relative or traveling companion.

Here’s what to keep in mind if you’re determined to follow tradition (though that might get harder the more soju your companions pour in our glass): If an elder offers to pour you a drink, you can either stand up or kneel (observe your surroundings to see if others are sticking strictly to tradition or if they have a more relaxed attitude). Then offer your empty glass with both hands (usually, people hold the bottom with their left hand and the side of the glass with their right hand). Once the elder has stopped pouring, you can return to your regular position, but don’t drink until the elder in question has raised her own glass. Once she’s said “Cheers” or, more likely, “Gunbae,” turn your head away from the group and then take a drink.

Yes, it’s a complicated dance meant to convey respect, so don’t stress getting it right on your first try. 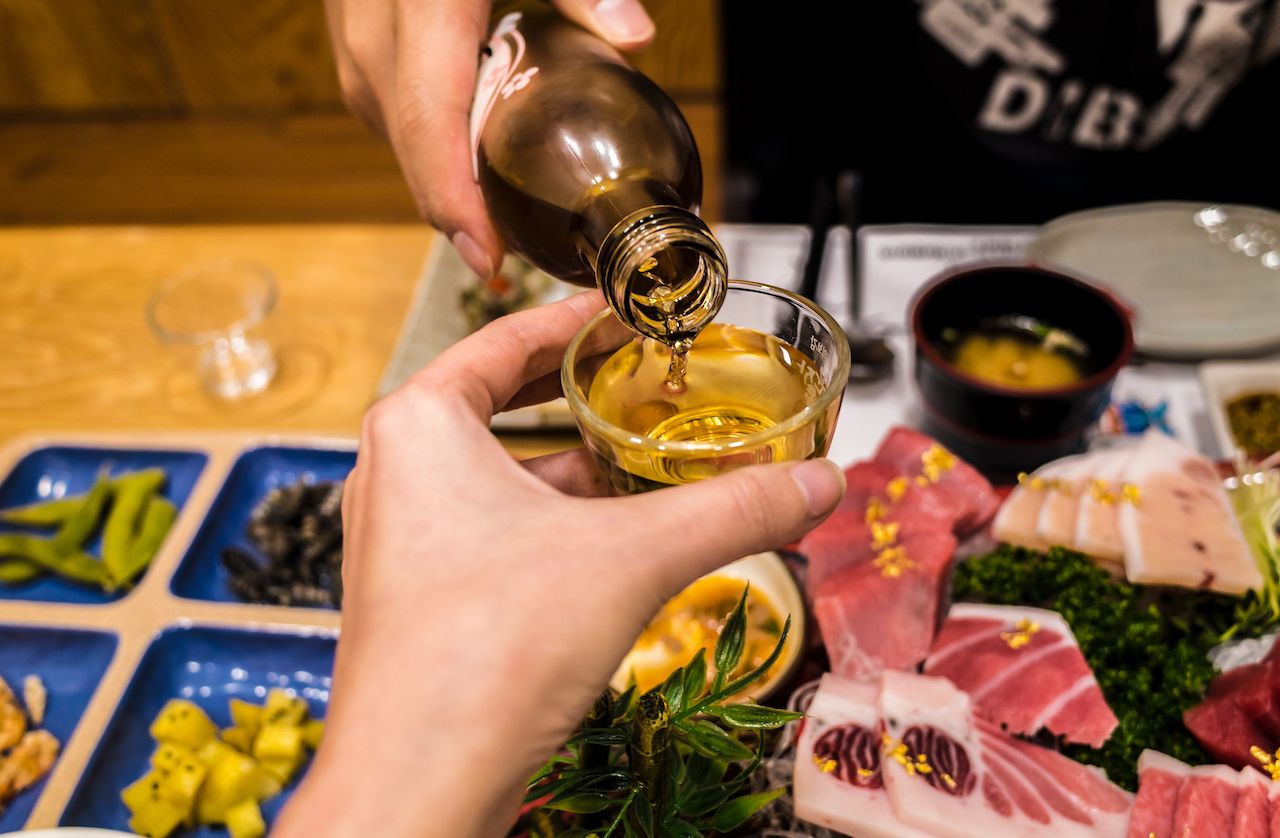 While shots might signal a wild night in the US, in Korea, taking shots of soju is about as common as taking a sip of water. One study found that, in Korea, “drinking behavior [is] often one-shot at a time rather than drinking a little sip.” A Euromonitor survey from 2014 revealed that the average South Korean drinks 13.7 shots per week, which is more than Americans, Russians, or the British. That might seem like a lot, but soju has a mild taste and lower ABV compared to liquor, which might account for at least part of the Korean obsession with soju shots.

Given that taking a shot sets the tone for the night, the first shot of soju that you’re offered should be downed in one drink. Luckily, you don’t have to shoot every other glass of soju offered to you — and there will be a lot of them. You can slowly sip any soju that appears in your glass after the first shot, and remember that if you want to stop drinking, just leave the glass half full so it isn’t refilled.

In Korea, like many countries around the world, most social occasions among friends involve alcohol. As anyone who has had a glass or two of wine will tell you, alcohol makes people talkative, energetic, and honest. In an essay on drinking culture in Korea, writer Tammy Cho explains that in Korea in particular, “drinking is seen as a social lubricant for South Korea’s overworked business employees and students.”

That same study on drinking behavior referenced above found that “drinking culture in Korea was characterized by more social drinking than by drinking alone at home.” It’s not that drinking alone is necessarily looked down on in Korea, it’s just that if you want to understand how Korean people relax, unwind, and blow off steam, hit the bars with a big group of friends rather than venturing out by yourself.

Anju, or drinking snacks, are an integral aspect of Korean drinking culture. Salty, savory snacks like pretzels or popcorn are usually offered at bars. Platters of fresh fruit sometimes accompany soju cocktails, which are often infused with fruit as well. But like almost everyone who feels hunger pains in the midst of a night of drinking, Korean people crave fried, greasy snacks. French fries. Fried chicken. Spicy fried squid and octopus. All sorts of delightful snacks to help soak up some of that soju. If you’re hosting a party at home (or wherever you’re staying), you should definitely be prepared to serve a plethora of anju. Or if you’re going out on the town, bring your appetite, because most Korean people don’t relish a night of drinking if it doesn’t incorporate platters of spicy, salty snacks.