While Louisiana will always be synonymous with New Orleans, another city in the state holds its own in offering a heck of a good time. Lake Charles is a fun city with a chill vibe — in that you can still enjoy a night out with others but also remember what your evening was all about, unlike what usually happens on Bourbon Street. Dining options range from places with a focus on the menu and dishes, with little fuss over ambience, to longtime establishments that encourage you to dress up. Other eateries get creative with their takes on everyday dishes or special treats. There’s some culture and nature to take in, too, making it the perfect spot for a summer road trip. Here’s where to see in and around Lake Charles. 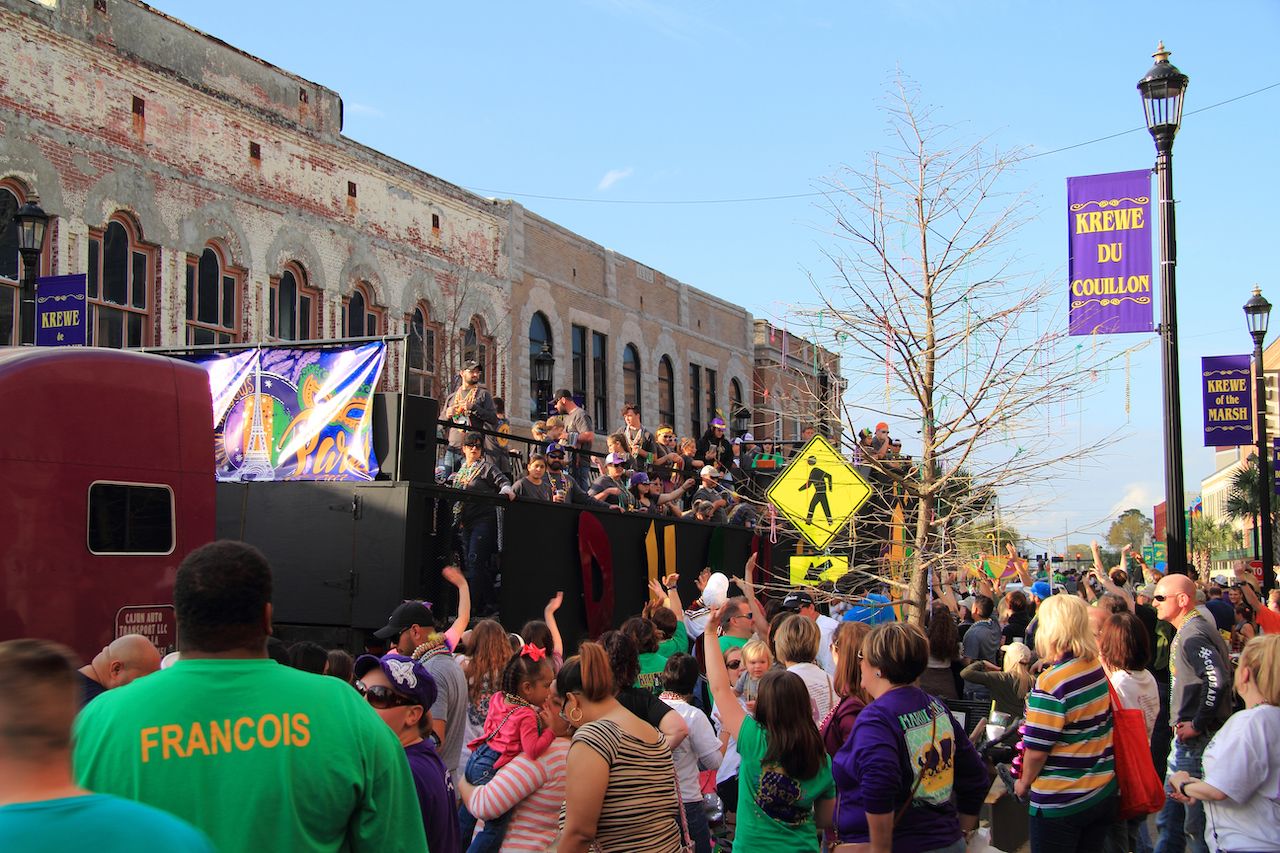 Three hours from NOLA, this city of 80,000 in Southwest Louisiana in the Calcasieu Parish puts on a big Mardi Gras, often said to be the state’s second-largest. Lake Charles not only hosts a grand parade but also has a children’s version and a royal gala where the town’s 60 krewes (social clubs that organize Mardi Gras events) put on their pageantry finest.

Some krewes also continue the Cajun tradition of a chicken run, known as a Courir de Mardi Gras. On Fat Tuesday, men in costume venture to different places and homes to perform music in exchange for receiving ingredients to make a community-feeding gumbo. The actual chicken run portion has the group’s captain release a live fowl, and youngsters chase after it to catch it.

Yet Lake Charles is active before and after Mardi Gras. The city is an event magnet with a yearlong activity calendar of more than 75 festivals that highlight such celebratory items of revelry including foods or holidays.

There are enough local distilleries and breweries to keep you very busy. 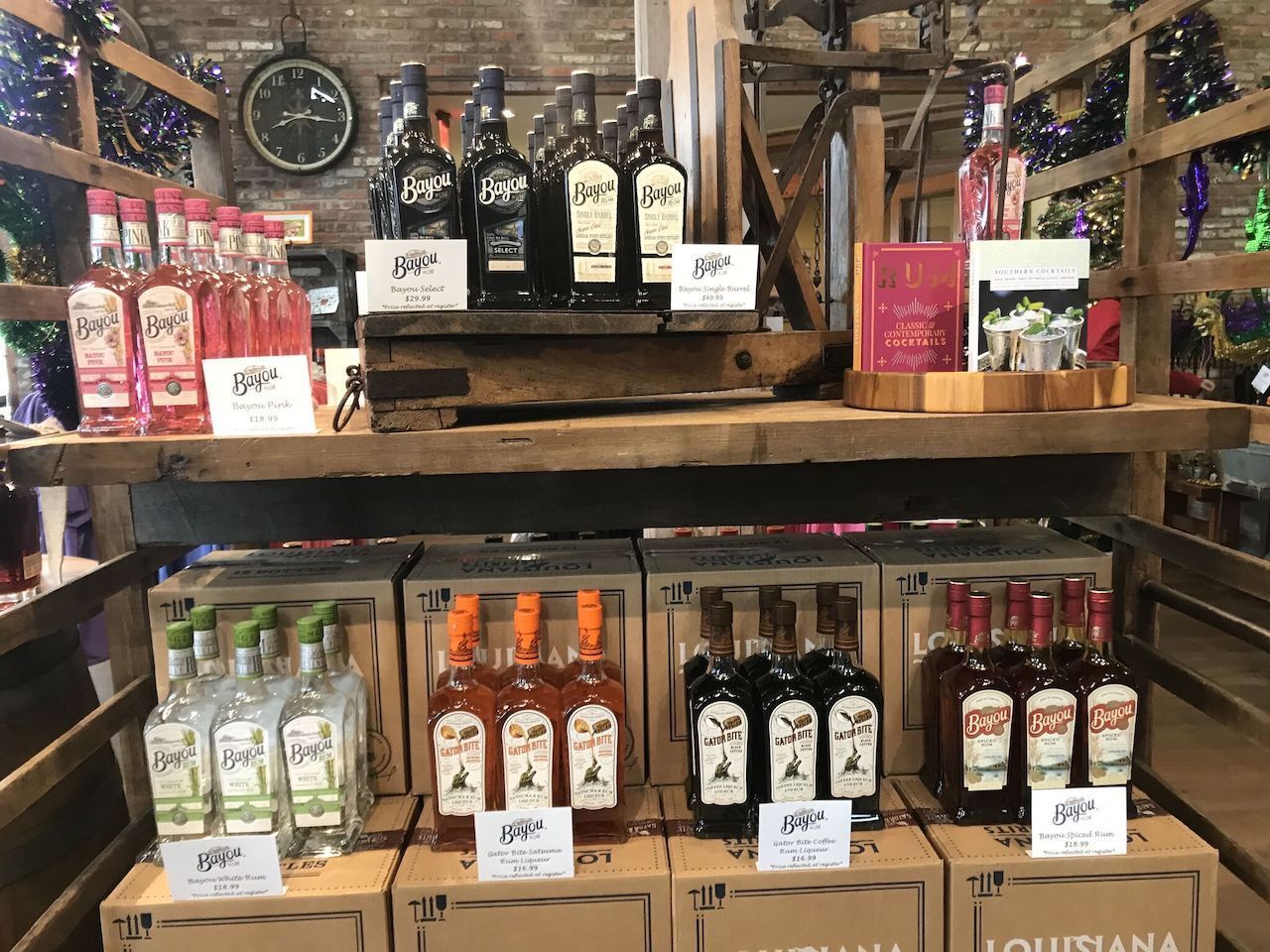 Festival or not, the best way to experience the city is through its obsession with food and locally made spirits. Louisiana’s rum-making history dates back to America’s colonial era when Jesuits grew sugar cane to make tafia (a drink similar to rum) in the mid-18th century. A hundred years later, the end of the American Civil War would change Louisiana’s rum-making production — as enslaved labor had previously harvested sugar cane on plantations — and then in 1920, Prohibition would cease public distilling around the country.

In recent decades, Louisiana’s rum production has come back as a craft industry. Louisiana Spirits Distillery in Lacassine began producing its Bayou Rum with 21st-century technology, aging the spirit in sherry and bourbon casks. About 25 minutes from Lake Charles, the distillery makes six Bayou Rum labels that can be sampled at daily tastings within its Barrel Library & Event Center. Along with a brief tour of the production facility, regular and premium rum tastings can involve the Bayou Pink, an onsite-only rum whose color comes from mayhaw berries; Bayou Spiced Rum, which contains 32 baking spices; and Bayou Satsuma Rum Liqueur, which holds the juice of this seedless citrus.

Fifteen minutes west of town, take a tour of Yellowfin Distillery in Sulphur, which produces single-estate vodkas — meaning the spirit is produced using ingredients mostly or only sourced from a specific place (Louisiana cane sugar) and produced at one certain location (in this case, this distillery). What really makes the fermentation, distillation, and filtration process unique, though, is that it leaves zero residual sugar.

Being that this is 21st-century America, you can wash down (or substitute) these spirits with local beer. Crying Eagle Brewing Company is known for its four year-round beers — Pistol Bridge, Louisiana Lager, Ready to Mingle, and Hop Blooded IPA — plus rotating seasonal releases including Strawberry Rye. With an outdoor beer garden, taproom, and bistro, Crying Eagle holds tours on Fridays and Saturdays. Also in Lake Charles, Rikenjaks Brewing Company originally came about in 1992 and has established itself as a social club of sorts, featuring live music and theme nights. 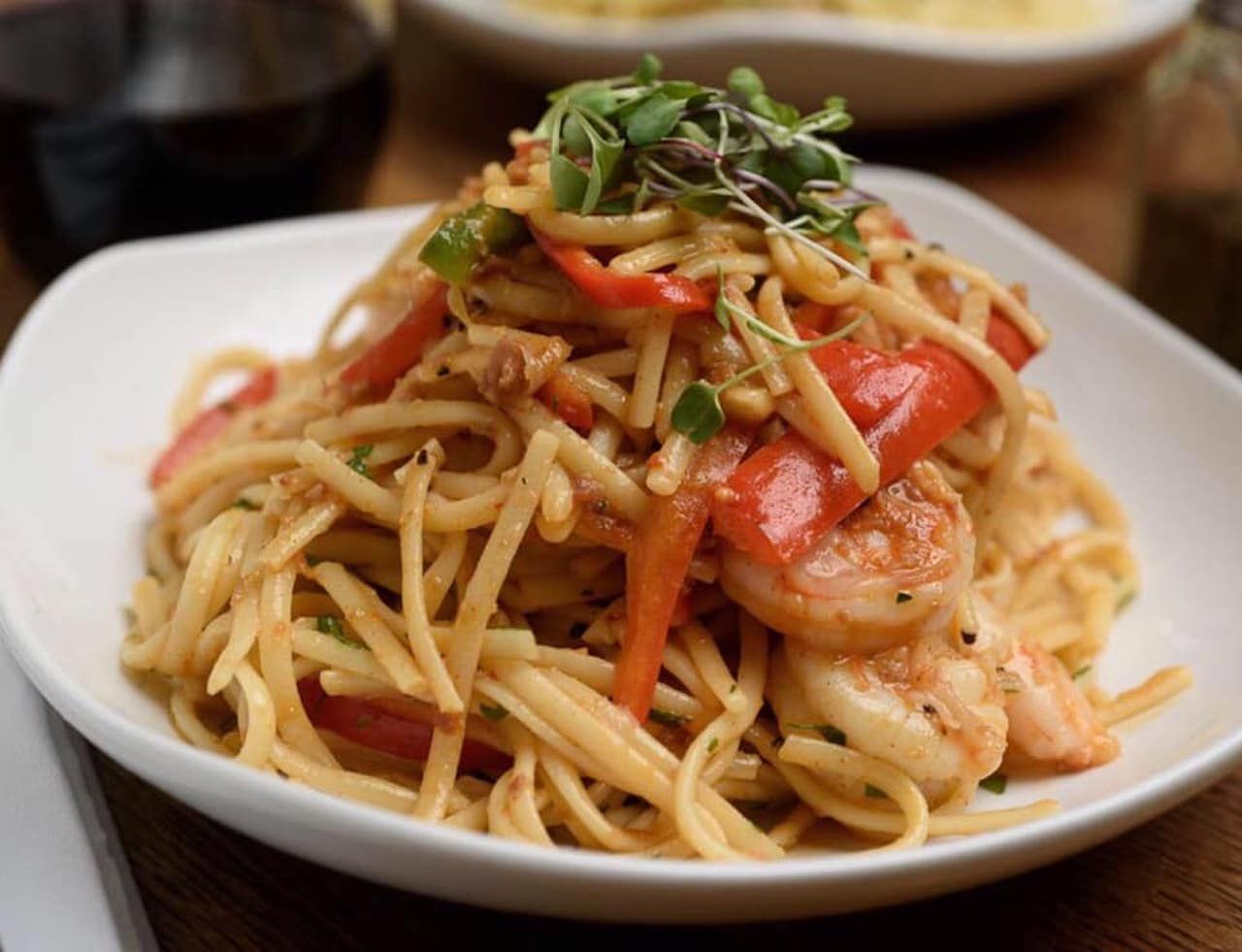 Dress up or down to dine out — Lake Charles can suit many tastes. The Villa Harlequin is the merger of two longtime Lake Charles establishments — one being an Italian restaurant, the other a steak and seafood eatery — that has become a fusion of two family-run legacies. Its Creole tomato bisque with basil and crab is perhaps the unofficial dish of the city, highlighting not only Lousiana’s Creole legacy but also the town’s penchant for tapping into what’s provided by the surrounding land and waters.

If crawfish is what you’re craving, the Seafood Palace serves up boils of it and crab along with a noted gumbo and fried or grilled seafood platters. This place has the no-frills and low-key atmosphere ideal for pulling off shells.

For a night out, Luna Bar & Grill gives off a downtown music vibe with cocktails named after the Beatles and other famous musical acts. BOOMBOX Frozen Pops and Ice Cream recalls the 1980s in creating and naming its flavorful frozen treats, such as 99 Red Doubloons and the chocolate and coconut concoction Grass Monkey.

It’s the best spot in Louisiana to try boudin. 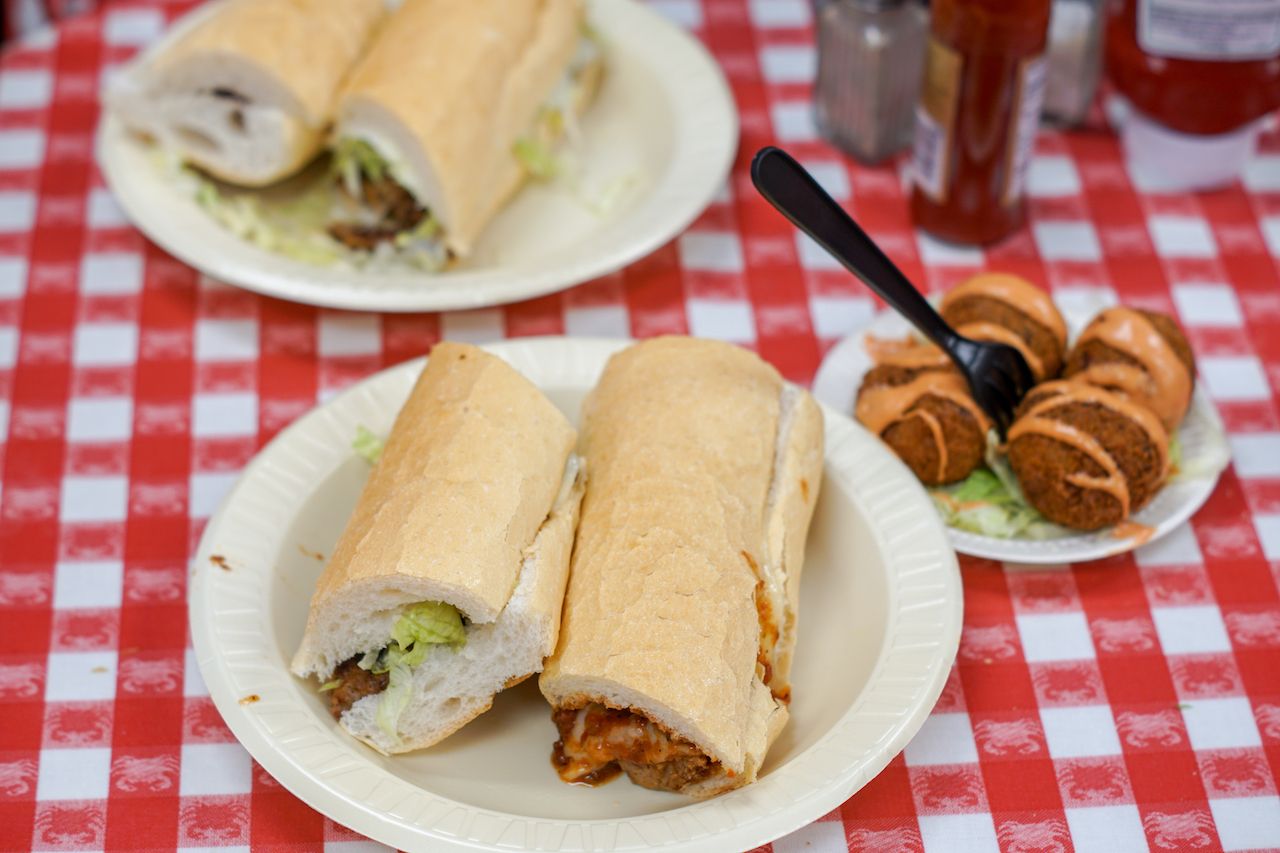 As engaging as pulling shells from fresh seafood is, it’s the boudin that actually defines Lake Charles’s cuisine. A specialty within the southern part of Louisiana, boudin is a finger food that’s the subject of its own trail running through Lake Charles and neighboring communities of Iowa, Sulphur, Vinton, Cameron Parish, and Westlake/Moss Bluff. This sausage snack, pronounced as “boodan,” is comprised of pork, liver, rice, onions, parsley, and dry seasonings. Find it at mom-and-pop establishments and restaurants such as LeBleu’s Landing and Sausage Link in Sulphur, a meat market with a window in which you can watch the stuff being made.

Beyond food, Lake Charles will teach you a thing or two about Louisiana culture. 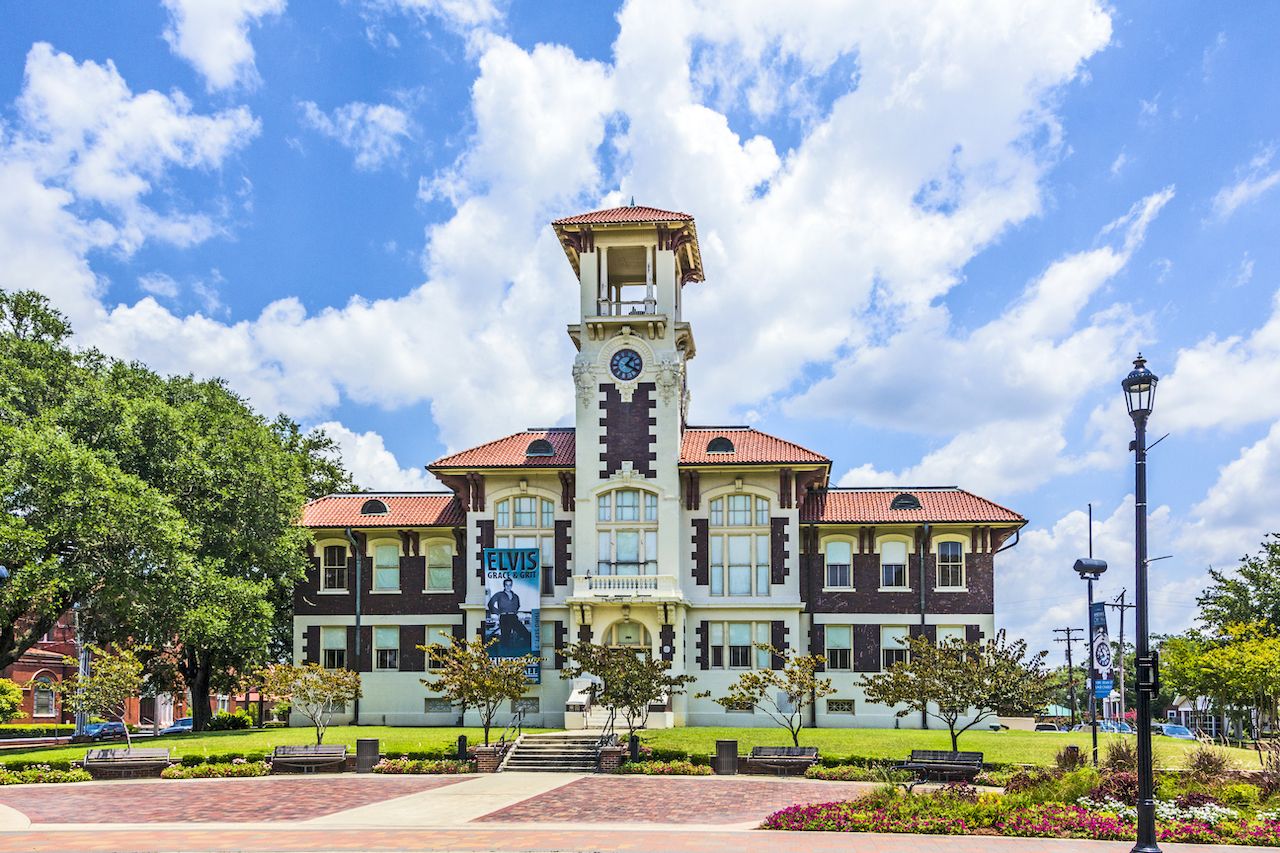 Even if Mardi Gras has come and gone before a trip to Lake Charles, experience the festivities through a visit to the Mardi Gras Museum of Imperial Calcasieu. Located inside the Central School Arts and Humanities Building, this museum chronicles the holiday’s history in Lake Charles with around 290 Mardi Gras costumes on display — plus 300 more in storage — with placards explaining just about every facet of the celebration. Each room focuses on different aspects of Mardi Gras with the first one delving into its origins and others highlighting its colorful attire, parades and floats, and more. Along the way, encounter some animatronic figures sharing stories.

The 1911 Historic City Hall Arts and Cultural Center is the city’s public art gallery, with its multiple floors with different showings. One of the floors hosts the Black Heritage Gallery and another contains traveling exhibits — examples have involved one on the life of JFK that features a photo of him during his 1959 Lake Charles visit — while the first floor showcases work correlating to or by artists from Lake Charles.

There are also four casinos in or near Lake Charles, a staple of regional entertainment and the best place to overnight in town. L’Auberge Casino Resort has various guestrooms and suites, though the Isle of Capri Casino & Hotel is the spot for serious gamers with 30 gaming tables, 11 poker tables, and 1,100 slot and video poker machines.

Learn everything you need to know about the region’s nature and wildlife on the Creole Nature Trail. 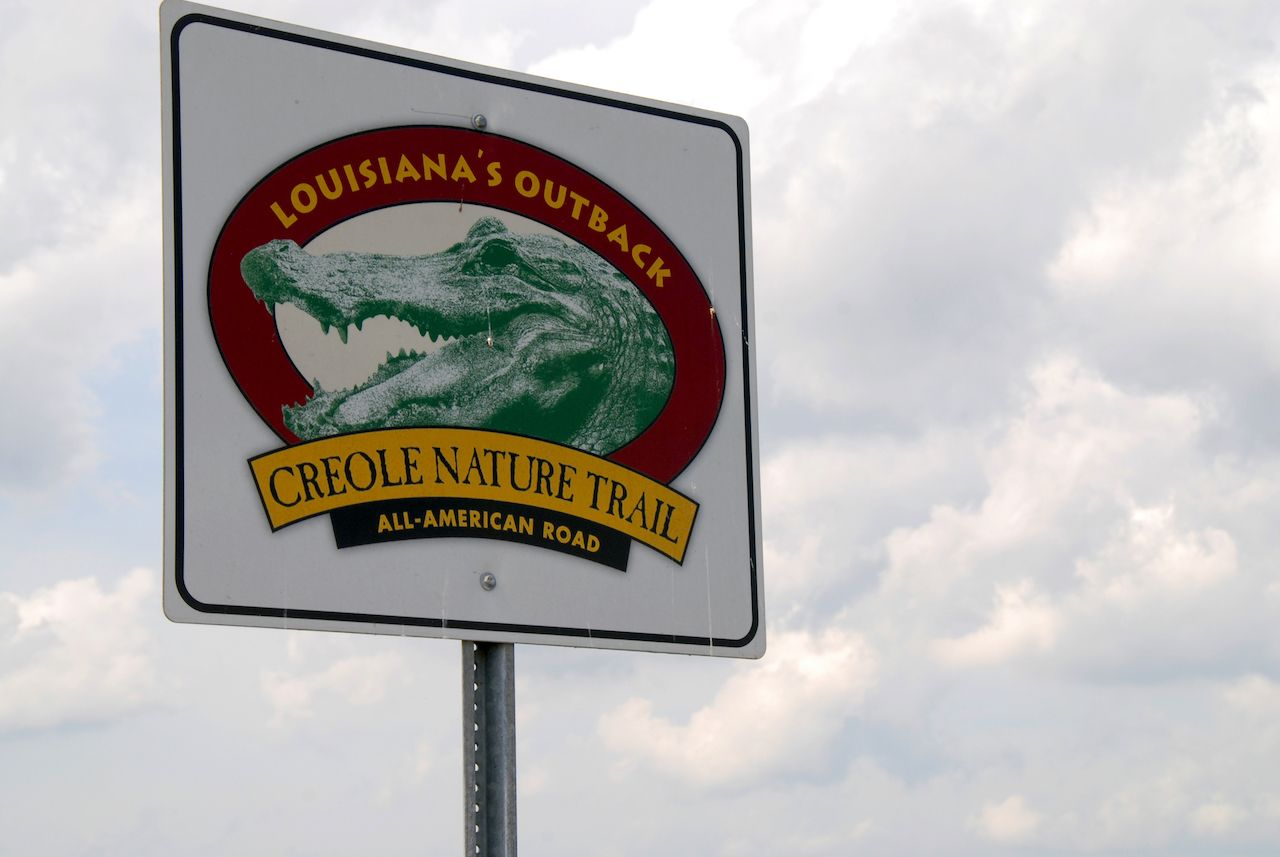 Nicknamed Louisiana’s Outback, the Creole Nature Trail is a 180-mile All-American Road scenic byway venturing along marshlands, three wildlife reserves, and Gulf of Mexico beaches. It meanders to and from Lake Charles to Sulphur and is home to alligators and 400 bird species, with the latter making it one of top birding destinations in the country.

Start off your road trip from the Creole Nature Trail Adventure Point in Sulphur, which serves a resource center for finding maps and advice along with hands-on exhibits highlighting the region’s ties to wildlife, Cajun and Creole cuisine, and zydeco and Cajun music. Or, download the Creole Nature Trail app on iOS or Google Play and drive on. Learn more about the region’s gator population by interacting with them at Gator Chateau, a volunteer-run center in Jennings that provides a safe haven for rescued young alligators until they are able to be released into the wild.

Food + DrinkYou Haven’t Experienced Louisiana’s Cajun Bayou Until You’ve Eaten Your Way Through It
Tagged
Culture Insider Guides
What did you think of this story?
Meh
Good
Awesome