The story of Latin America’s love affair with plantains begins in the 15th century, when the green banana traveled from plantations established by Portugese colonizers in West Africa to newly established colonies in South American cities like Cartagena in Colombia. Bananas and plantains, however, were likely originally domesticated in New Guinea and introduced to Africa through Madagascar. As early as 1492, Portugese colonizers recorded encountering plantains and bananas in West Africa, and Tomás de Berlanga, who eventually became a bishop of Panama, brought bananas to his new post in 1534. The fruit didn’t arrive in the United States until the early 1800s.

The Portuguese loaded bananas and plantains along with enslaved people on the long journey to Brazil, a practice that mimicked Spanish slave traders traveling to Mexico and Panama. When the plantain arrived in South America, enslaved people quickly adopted it into their diet, where it became a staple alongside beans, yams, and corn. Today, Central and South America and the Caribbean Islands are famous for their plantain dishes. The adopted fruit has become a symbol of this region’s nourishing, plant-heavy cuisine. It sustained enslaved people over oceans, and continues to nourish families from Central, South, and the Carribean — people who have reclaimed plantains from their unhappy origins.

Green plantains are starchy, with a texture and flavor similar to a raw potato, and they have to be cooked before they can be eaten. Ripe yellow plantains, on the other hand, are much sweeter and can be eaten raw, though they’re often fried. Mofongo, a Puerto Rican plantain dish of mashed plantains cooked with garlic, formed into a half-dome shape, and served with shrimp, is likely the most well known and popular plantain dish, but throughout the Caribbean, Central, and South America, plantains are transformed into dumplings, soup, and even beverages.

Here are even Latin American plantain dishes beyond mofongo you need to know. 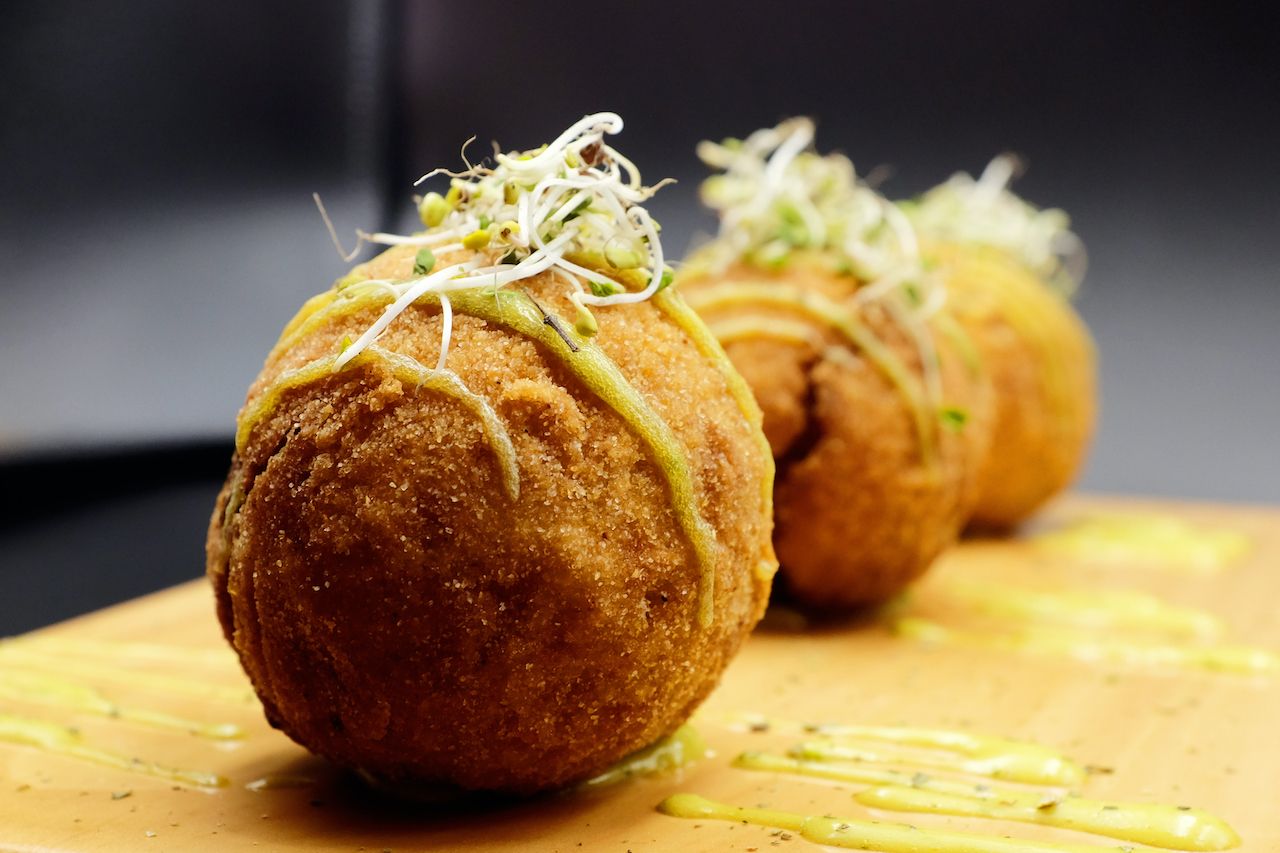 These green plantain dumplings filled with cheese or pork hail from Ecuador. The pork version contains chicharrones; in other countries in Central and South America, the term refers to fried pork rinds, but in Ecuador it actually means fried chunks of pork meat, according to Ecuadorian food blogger Layla Pujol. In Peruvian cuisine, plantain dumplings are known as tacacho. Especially popular in the Amazonas region, the plantains are mashed in a wooden mortar, formed into balls along with pork rinds, and served with breakfast.

This thick soup from Ecuador combines white fish with yuca, sweet corn, and ripe plantains. Its rich yellow-orange color is derived from the seeds of the achiote tree, and it’s seasoned with lime, oregano, and cumin. The soup is heavy on the root vegetables, and some versions include sweet potato or pumpkin. The dish likely originated in Manabí, but it’s popular all along Ecuador’s coast. 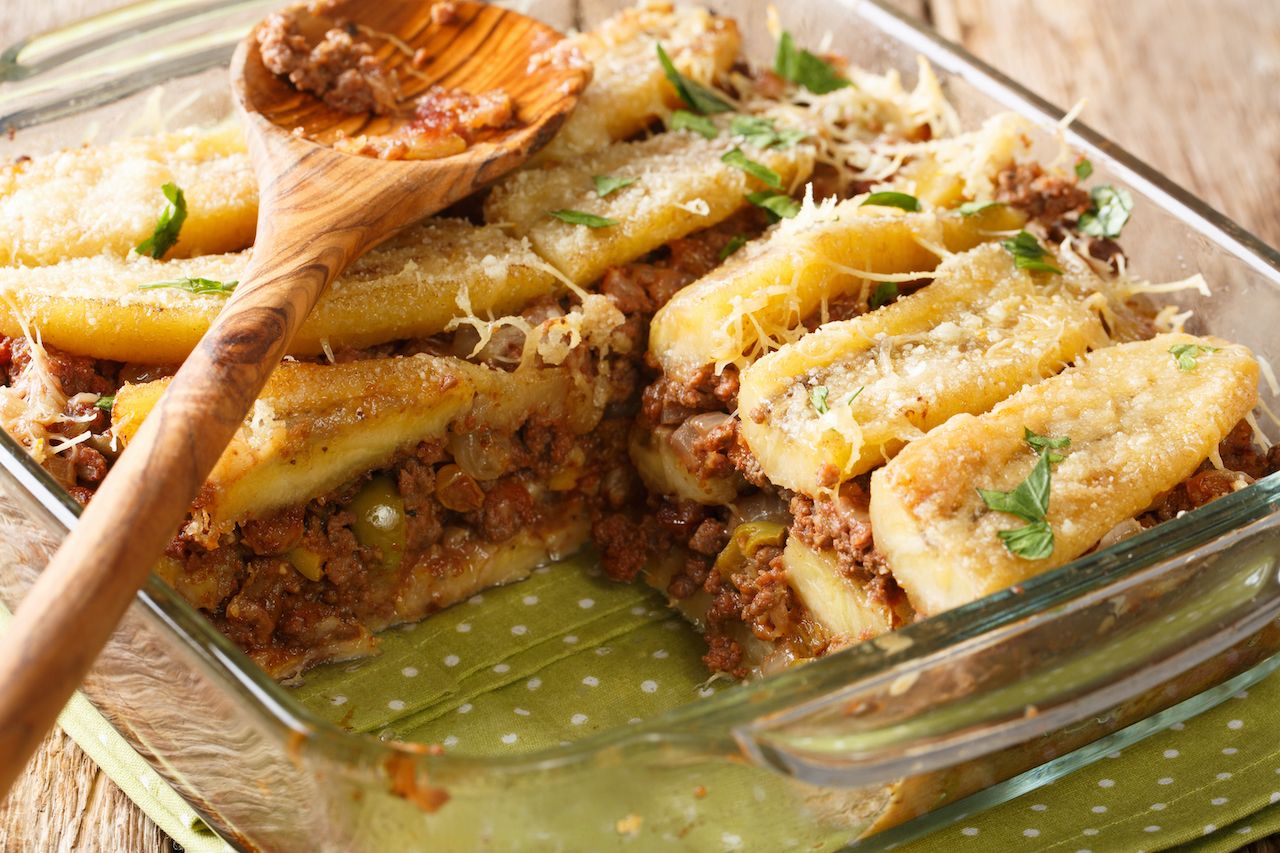 This Puerto Rican spin on lasagna is made by layering thinly sliced sweet yellow plantains; a ground beef mixture called picadillo that’s seasoned with oregano, cumin, and paprika; and mozzarella cheese. There are many different versions of pastelón all over Puerto Rico, and some versions add raisins while others mix the plantains with taro. In the Dominican Republic, where plantains are nicknamed guineo — perhaps a reference to the fruit’s origins in New Guinea — there’s a nearly identical dish known as pastelón de plátano maduro. Pastelón is often conflated with piñon, but the latter is an entirely different plantain dish. Piñon is closer to a casserole, in which fried whole sweet plantains are layered over picadillo.

The Matsés indigenous peoples of the Amazonian region of Peru make a drink from roasted sweet plantains. The starchy plantains provide a boost of energy from carbohydrates. After the plantains have been cooked, they’re squeezed and strained through sieves constructed from palm leaves. The drink is then spiced with cloves and cinnamon and served cold. 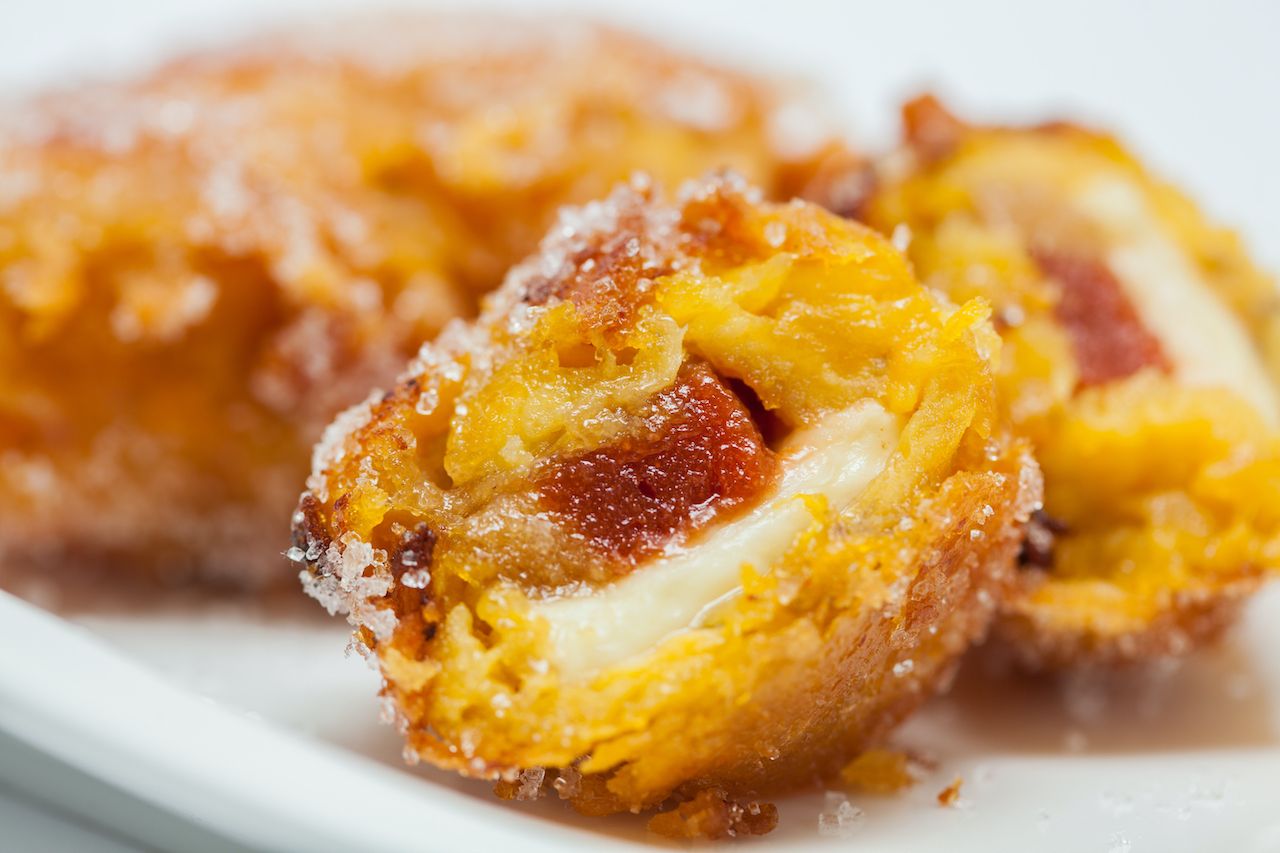 These ripe plantain fritters come from Colombia. Like bolon de verde, aborrajados are filled with cheese, but before frying, they are dipped in a batter of egg and flour. Guava paste is another beloved filling, adding to the sweetness of the plantains. Venezuelan people however, contend that they should get credit for creating aborrajados, where they’re commonly known as yo-yos or sleeping kids.

Served in Puerto Rico, the Dominican Republic, Trinidad and Tobago, and all over the Carribean, pasteles resemble tamales in appearance. The masa, or maize-based dough, for pasteles is a mixture of green plantains, taro root (also known as malanaga or yautia), and sometimes pumpkin. Another version called pasteles de yuca are made with a yuca root mixture. The masa is spiced simply with oregano, and sometimes cubed pork is added to the dough. The dough is then wrapped in banana leaves and boiled.

In Puerto Rico in particular, the preparation and eating of pasteles with family is a beloved Christmas tradition. According to Cooking Channel writer Eden Grinshpan, “Puerto Ricans take so much pride in their pasteles,” but because they are so “labor intensive” to make, their preparation is typically confined to special occasions like the holiday season. 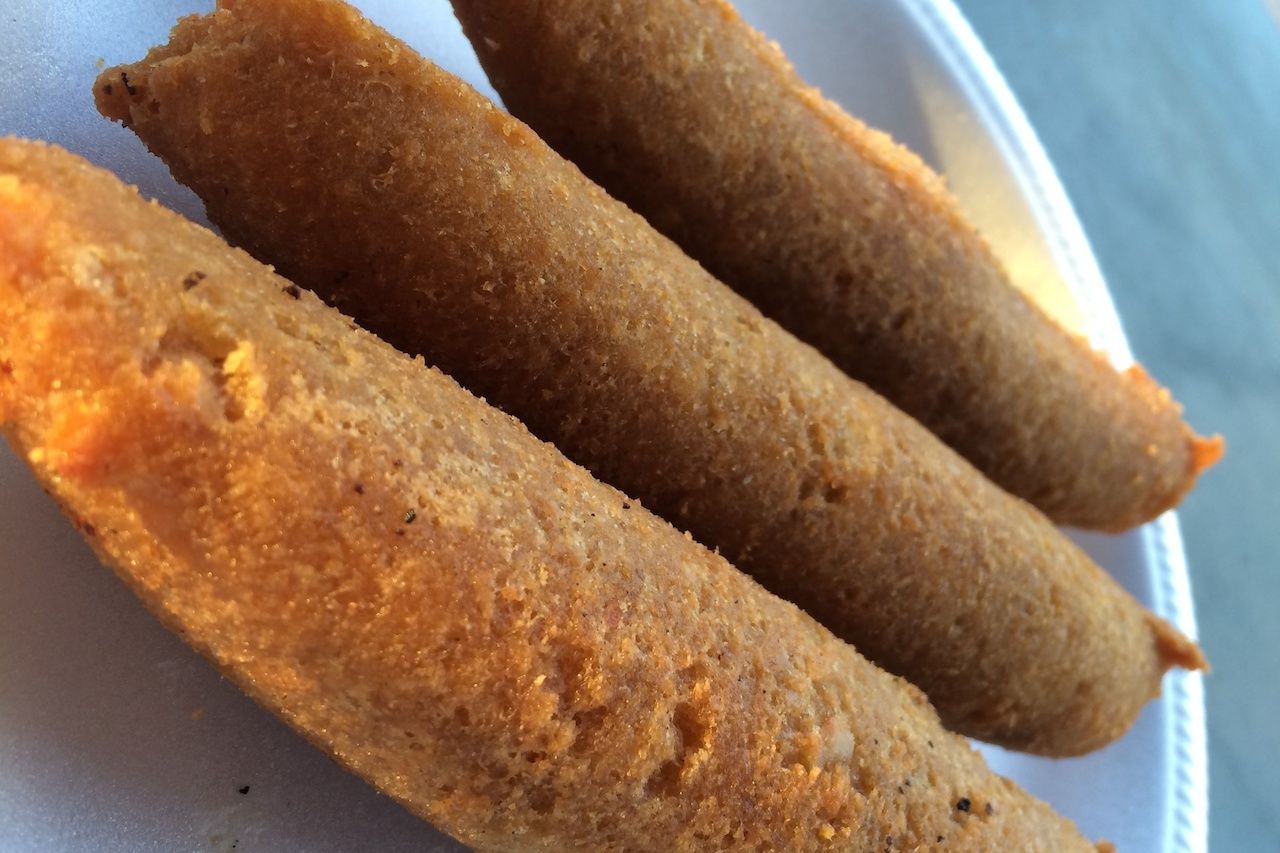 Alcapurrias are another way to fry plantains, this time from Puerto Rico. This fritter is made from a mixture of green bananas and yautia (taro root) and picadillo. Alcapurrias are one among many cuchifritos — which are fried snacks, their name derived from a Spanish fried pork dish called cochifrito — sold at kioskos, or beachside vendors that sell street food. Cuchifritos are covered in masa dough and then stuffed with the picadillo filling.

Food + DrinkEverything You Need To Know About Mofongo, Puerto Rico’s Most Important Dish
Tagged
Food + Drink
What did you think of this story?
Meh
Good
Awesome