Casseroles are a staple dish in the Midwest, where they incorporate ingredients like cream soups and green beans. But the Midwest doesn’t have a monopoly on inventive casseroles. In Louisiana, a lime green squash that’s about the size of a pear, called a mirliton, is a local delicacy. It takes centerstage in a much-loved Thanksgiving dish called mirliton casserole.

Native to Central and South America, the squash was introduced to North America by Spanish colonists. Mirlitons likely landed in New Orleans around 1763, when France transferred power over the region to the Spanish. Though it also grows in California and Florida, mirliton, pronounced mel-lee-tawn and mel-uh-tawn, is considered, according to The Kitchn, the “unofficial squash of New Orleans.”

It also goes by many other names, including chayote and, if you’re from Louisiana, alligator pear. No matter what you call it, this mild gourd is beloved because it soaks up other flavors well. Its flavor is sometimes compared to a cucumber, while its texture is akin to a crunchy apple.

The plant is abundant in southern Louisiana, according to Louisiana-based recipe blogger Katherine Roberts Aucoin, who notes mirlitons are a wintertime staple. Mirlitons pop up so much around Thanksgiving because the vines flower from September to October. Thirty days later, the resulting fruits are ready to harvest, a process that continues through mid-December.

That convenient seasonality means that while much of the rest of the country relies on pumpkins and butternut squash, Louisiana has the added variety of serving mirlitons at Thanksgiving and Christmas dinner. Mirliton casserole is one popular way that it’s served. 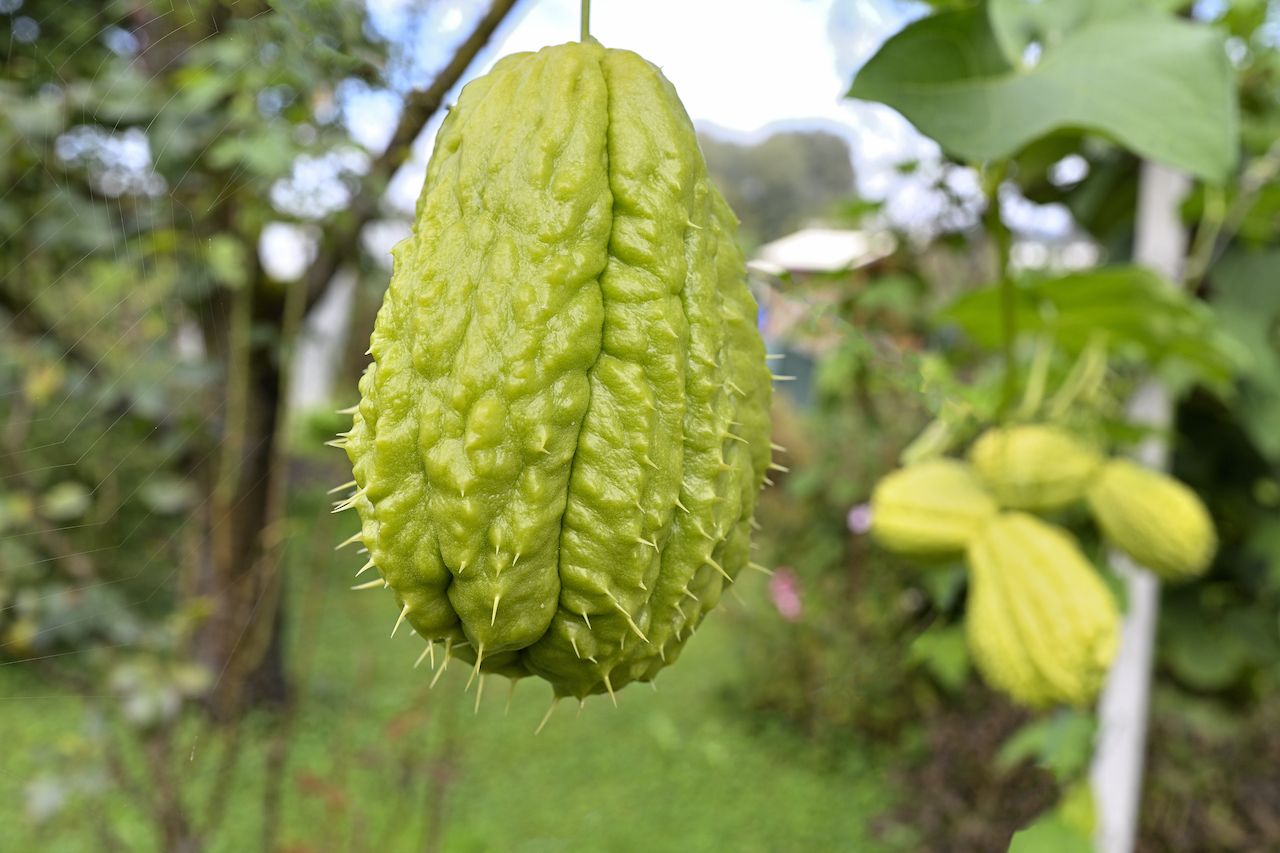 The casserole itself it simple: The boiled and diced mirlitons are combined with celery, onions, bell pepper, and bacon or tasso — a variety of smoked and cured ham that’s seasoned with pepper, cayenne, garlic, and thyme, among the other spices and herbs that are a speciality of southern Louisiana’s Cajun cuisine. The key ingredient is really the addition of seafood — because who in Louisiana can resist the call of shellfish? Most recipes for mirliton casserole call for shrimp, but there are many variations. Others incorporate crawfish — a Louisiana favorite — and crab meat into the mix.

How one layers flavors in this casserole really depends on taste. While the casserole is usually topped with some combination of breadcrumbs and crackers, there are some recipes that include cheese. Another version calls for crab, shrimp, and andouille sausage (but no ham). Old Bay, Creole, and Cajun seasoning mixes are all recommended to punch up the smoky, spicy flavors, which is balanced out by the sweetness of the shrimp. No matter what ingredients you use to customize this dish, according to iconic New Orleans restaurant Commander’s Palace, mirliton casserole should ultimately turn into a “custardy” mixture. In the restaurant’s words, it’s a bonafide “Louisiana comfort food.”

Folks from Louisiana have strong feelings — and even stronger memories — of eating mirlitons with family on the holidays. One food blogger who goes by the moniker Herb Saint, writes that mirliton casserole is “quintessentially New Orleanian,” and that the dish “tastes like my grandmother’s kitchen to me.”

The dish seems to hold many reminders and associations with family meals: Dave Howson, who goes by the name Sweet Daddy D on this blog First…you have a beer, writes that “everybody’s Moma has a recipe for mirlitons, from Chalmette to North Baton Rouge.” He prepares a slightly tweaked version of the casserole using a dressing (or stuffing) made with mirlitons and shrimp and that’s seasoned with Creole spices and bacon grease.

“Mirlitons were a staple, just part of the landscape in New Orleans and South Louisiana,” Howson wrote to me in an email. “You couldn’t go to a cover dish at church or have a family gathering that didn’t include a mirliton casserole, sometimes a few of them.”

Howson first became aware of mirlitons after encountering them in his sister’s garden, near Audubon Park. In the tiny flower patch behind her shotgun house, he discovered “a vine that was covered with these odd-looking light green pear-shaped vegetables,” which solidified his “particular affection for mirlitons.” Unfortunately, Katrina has what Howson characterizes as a “devastating impact” on the city’s once flourishing backyard gardens where mirlitons were once abundant, but that “a major grass-roots effort started almost immediately to reestablish the homegrown mirliton.”

The women in Howson’s life are behind his love of dishes that incorporate mirlitons — not just his sister, but also his mother-in-law, whom he calls his culinary mentor.

“The ease in which she combines ingredients and seasonings that translates into awe-inspiring dishes is the stuff of family legend. What she does with a mirliton is inspiring, but like most of her recipes, the rich flavor belies the simplicity of the ingredients and process,” Howson says. “My holiday tradition has been to be the one standing by her side, which I plan to do again this year while I tackle her Mirliton and Shrimp Casserole. Believe me, she’ll let me know if I’m not doing it right.”

Another variation on this dish is almost the opposite of a shrimp and mirliton casserole: mirlitons stuffed with shrimp. Kim, the recipe blogger behind This Ole Mom, recalls traveling to her uncle’s house in New Orleans for Thanksgiving and Christmas, where she and her grandmother picked mirliton straight off the vine. Afterward, her “granny” made mirlitons stuffed with shrimp for dinner.

“Granny’s Mirlitons were the best! Sometimes she would stuff the Mirlitons with crabmeat, crawfish, and shrimp,” she writes. “Of course, the dinner table never looked complete if granny’s famous Mirlitons were missing from the menu.”

If you love shellfish and Cajun or Creole cooking, a mild squash might not be what you’re expecting to find in a Thanksgiving casserole. But mirlitons are the perfect accompaniment to the heat and smoke of Southern Louisiana cuisine. And it has one more special component: It evokes powerful nostalgia in so many people who prepare it around Thanksgiving. This unassuming vegetable might not be bland after all — it tastes like family, the holidays, and home.

Food + DrinkThe Midwest Is the Home of the Casserole. These Are the Ones To Try
Tagged
Food + Drink Holidays Louisiana, United States
What did you think of this story?
Meh
Good
Awesome

The Ultimate Food Tour of New Haven, the Birthplace of American Pizza
The Truth About Artificial Vanilla Extract (and Why You Should Always Splurge for Pure)
This Historic Castle Distillery Is the Best Place To Drink in Kentucky Bourbon Country
No Trip To Philly Is Complete Without Trying These 10 Reading Terminal Market Food Stalls
Amtrak Food and Drink Options: Everything You Need To Know Before Your Next Train Trip

19 Words and Expressions You Should Learn Before Traveling To Louisiana

The Most Amazing Christmas Window Displays in the World

Chefs Explain Their 12 Favorite Holiday Recipes From Around the World