South Korea is known for top-tier entertainment thanks to K-Pop bands like global sensations BTS, internationally acclaimed hit Netflix shows like Squid Game, and the first foreign-language film Best Picture Oscar-winning movie Parasite. But for travelers, Seoul is also well regarded as one of the leading culinary destinations in the world.

Seoul has become one of the hotspots for fine dining that highlights both traditional cooking methods and innovative techniques. There are more than 30 Michelin-starred restaurants in Seoul — that’s more than Madrid, Chicago, Bangkok, and San Francisco.

In the last decade, some of Seoul’s most celebrated fine-dining restaurants are also distinguishing themselves with unique modern twists to traditional Korean (Han-sik) cuisine. Take, for example, French-Korean dishes such as large morel stuffed with an ogol chicken mousseline, shredded cabbage made with Goseong scallops, and lotus root topped with fragrant citron foam.

These four world-class Michelin star restaurants are worth keeping on your radar for when you want to eat your way through the city in style.

La Yeon at The Shilla Seoul 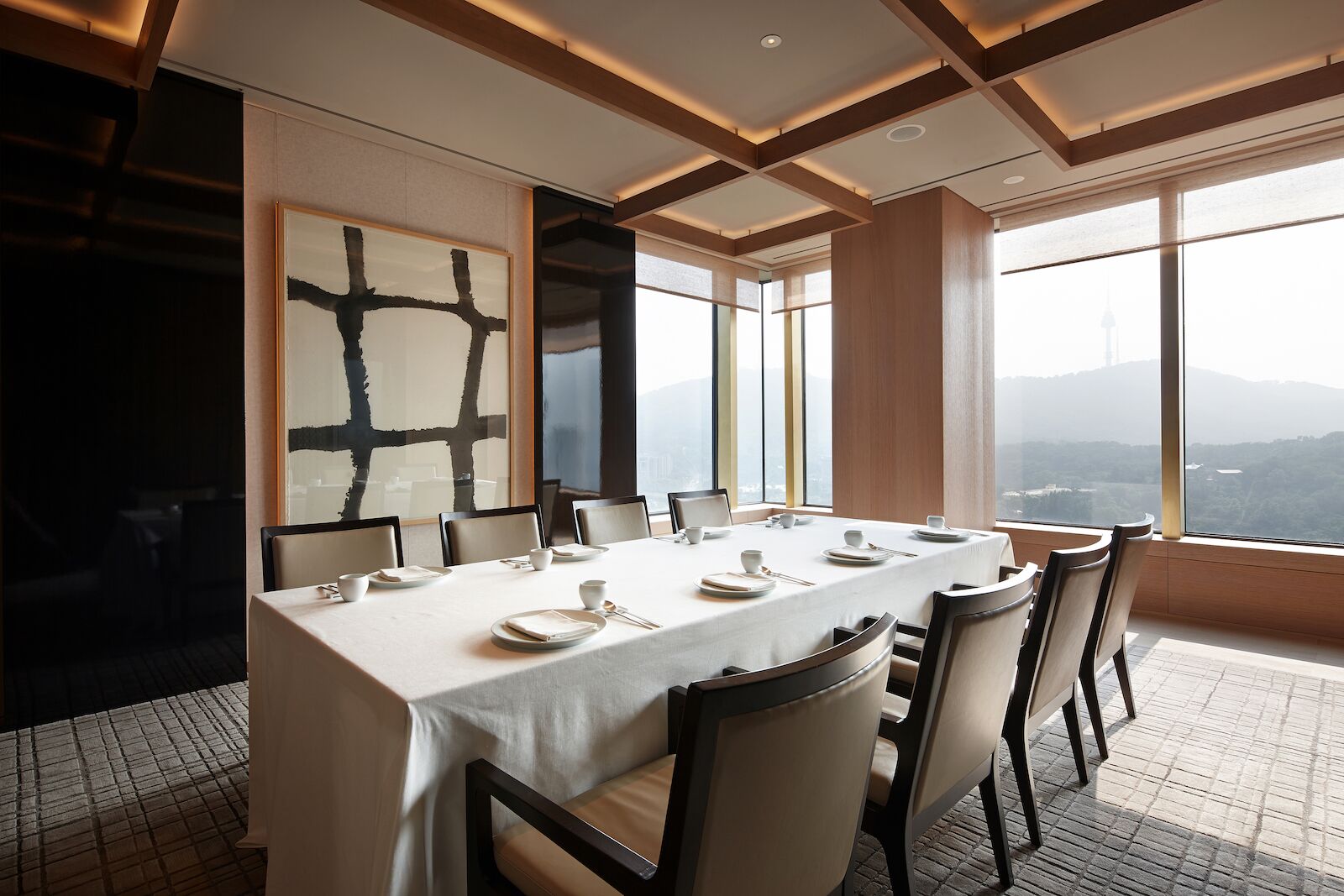 Offering stunning views over Namsan Park and the Seoul skyline, La Yeon is an elegant Korean restaurant located on the 23rd floor of the iconic The Shilla Seoul. The spacious dining area, which seats up to 40 people including one private room, is embellished with traditional Korean patterns and wood furniture, making for the perfect ambience for a fine meal.

Celebrated executive chef Kim Sung Il’s contemporary interpretations of classic Korean cuisine earned La Yeon two Michelin stars this year, and it was the first hotel restaurant in Korea to be awarded three stars in previous years.
Using only top-notch seasonal local ingredients exclusive to only a few in the market and directly sourced from The Shilla’s own exclusive food network, La Yeon uses the fundamentals of traditional Korean cooking and brings it into the modern age using flavorful ingredients. 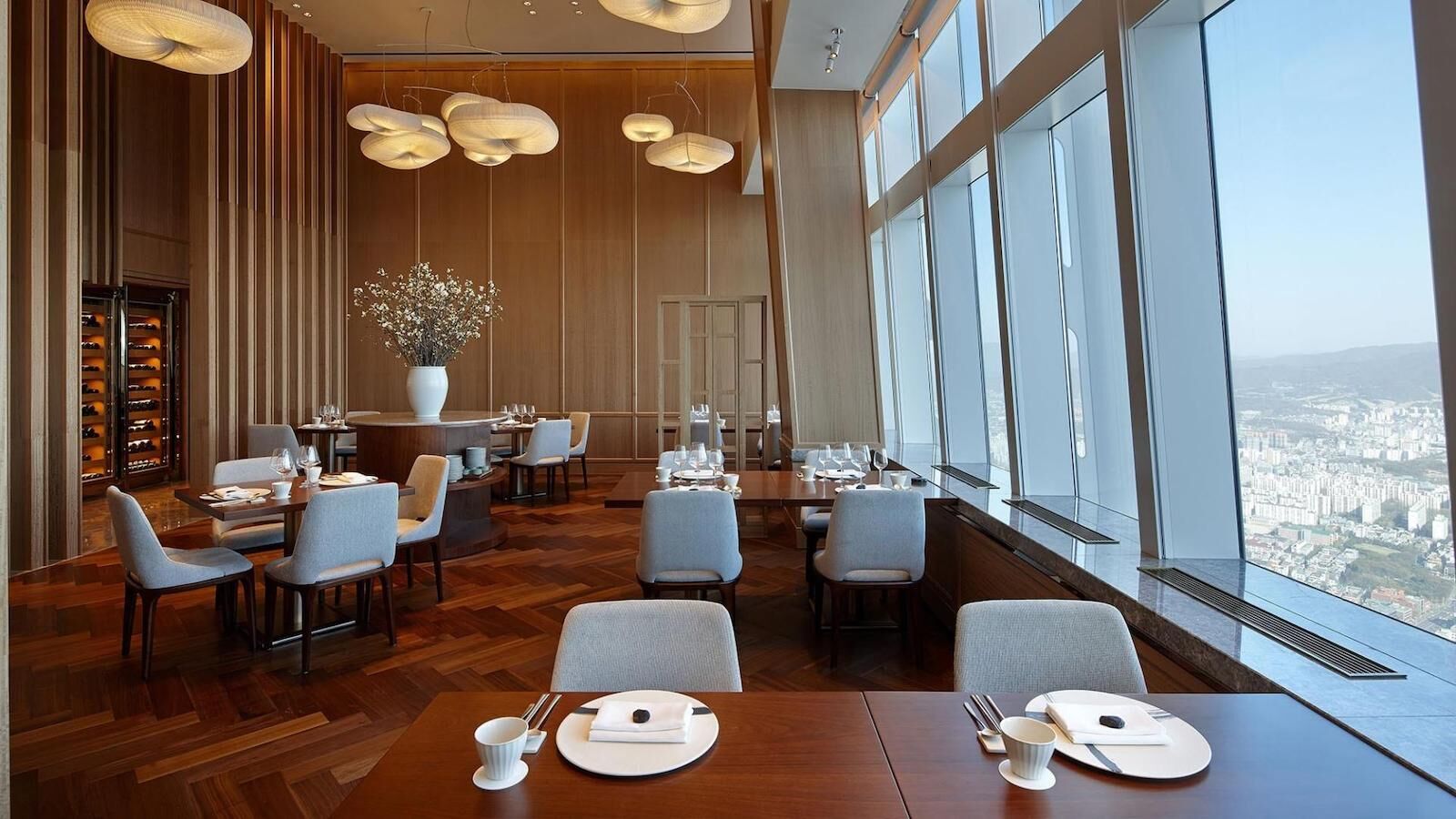 Signiel Seoul hotel is located on the 76th through 101st floors of Lotte World Tower in the greater Gangnam area in the quiet residential Songpa-Gu district along the Han River. One-Michelin-star restaurant Bicena is located on the hotel’s 81st floor. Signiel Seoul is the country’s tallest tower (and sixth tallest in the world) at an impressive height of 1,823 feet. That makes Bicena the highest restaurant in the world.

At Bicena, Korean executive chef Kwangsik Jun serves up contemporary Korean cuisine in a lavishly appointed dining room. Its design was inspired by three Korean verbs that translates to “emptying, filling, and then sharing.” The warm wooden interiors and floor-to-ceiling windows allow for abundant natural light to fill the space, creating a welcoming ambience for fine dining.

Jun previously worked as the sous chef at GAON, the first three-Michelin-star Korean restaurant. His expertise lies in creating modern Korean dishes from the fundamentals of traditional Korean foods while using fresh seasonal ingredients and fermented sauces. The names of the dishes at Bicena are inspired by the 10 traditional symbols of longevity, including for the sun, clouds, mountains, and water. 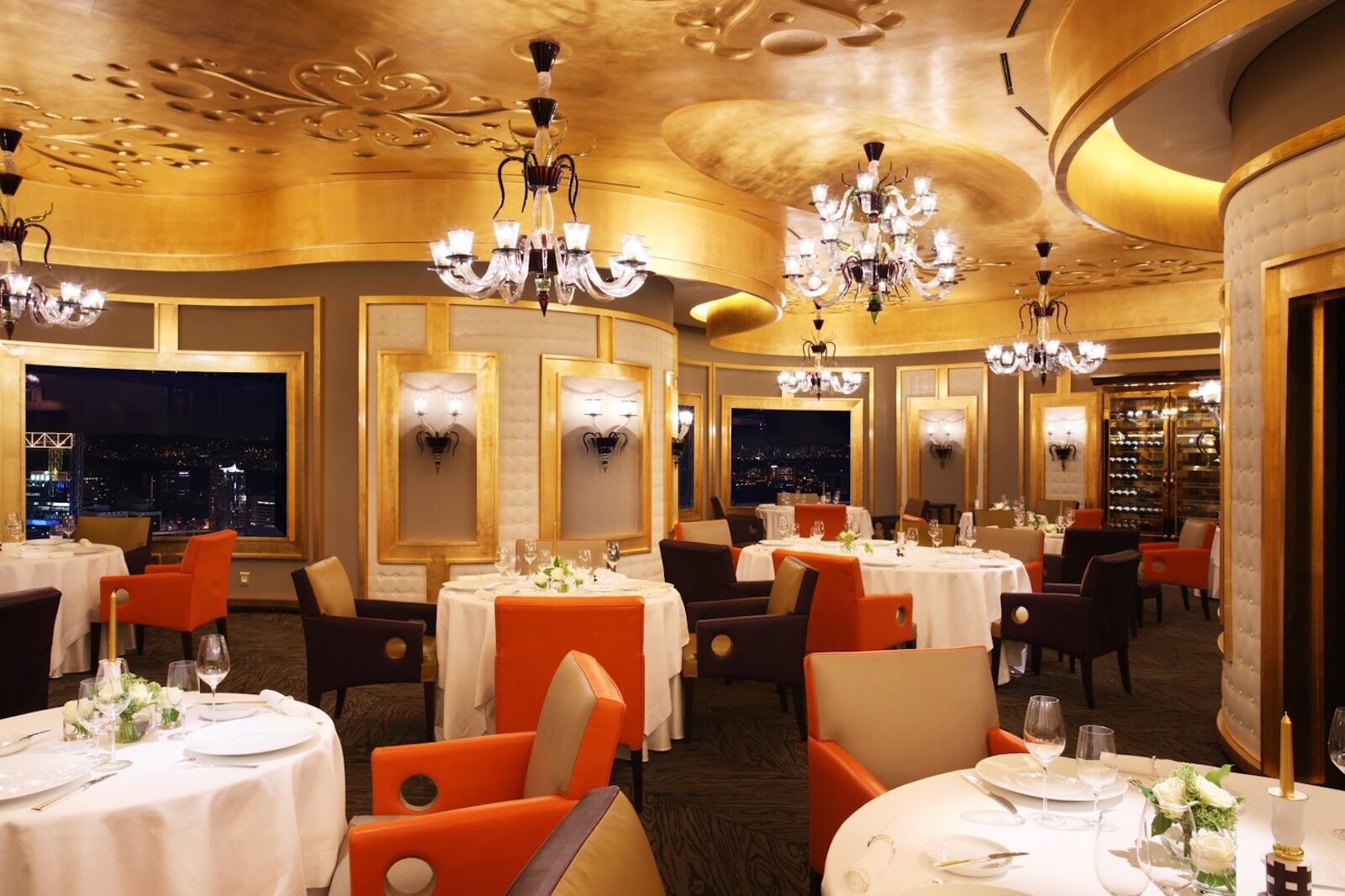 The picturesque views of Bukhan Mountain and downtown Seoul from the Executive Tower of the Lotte Hotel Seoul in fashionable Myeongdong are reason enough to visit. But anyone who loves fine food will appreciate that Pierre Gagnaire à Séoul, on the hotel’s 35th floor, is also regarded as the city’s finest French restaurant, earning one Michelin star since 2019. The black and gold Parisian interior is designed to replicate the Palace of Versailles’ secret garden.

French chef Pierre Gagnaire is known for his artistic take on French cuisine, especially southern French dishes, which have earned him the nickname “Picasso of Gastronomy.” He is also the head chef and owner of twelve Michelin-star restaurants worldwide, including the iconic three-Michelin-starred Pierre Gagnaire restaurant in Paris.
There are five set menus available. On the seasonal dinner menu are elaborate French-Korean creations such as sole stuffed with snails, spinach fondue, and Korean beef flank steak — all plated so beautifully you aren’t sure whether they’re food or art.

The Déjeuner Pierre Gagnaire seasonal menu is divided into plates that are from the sea (such as filet of John Dory cooked à la plaque spiced with tandoori), and earth (such as Korean beef filet or prime rib), and all menus offer coffee and a selection of dessert. 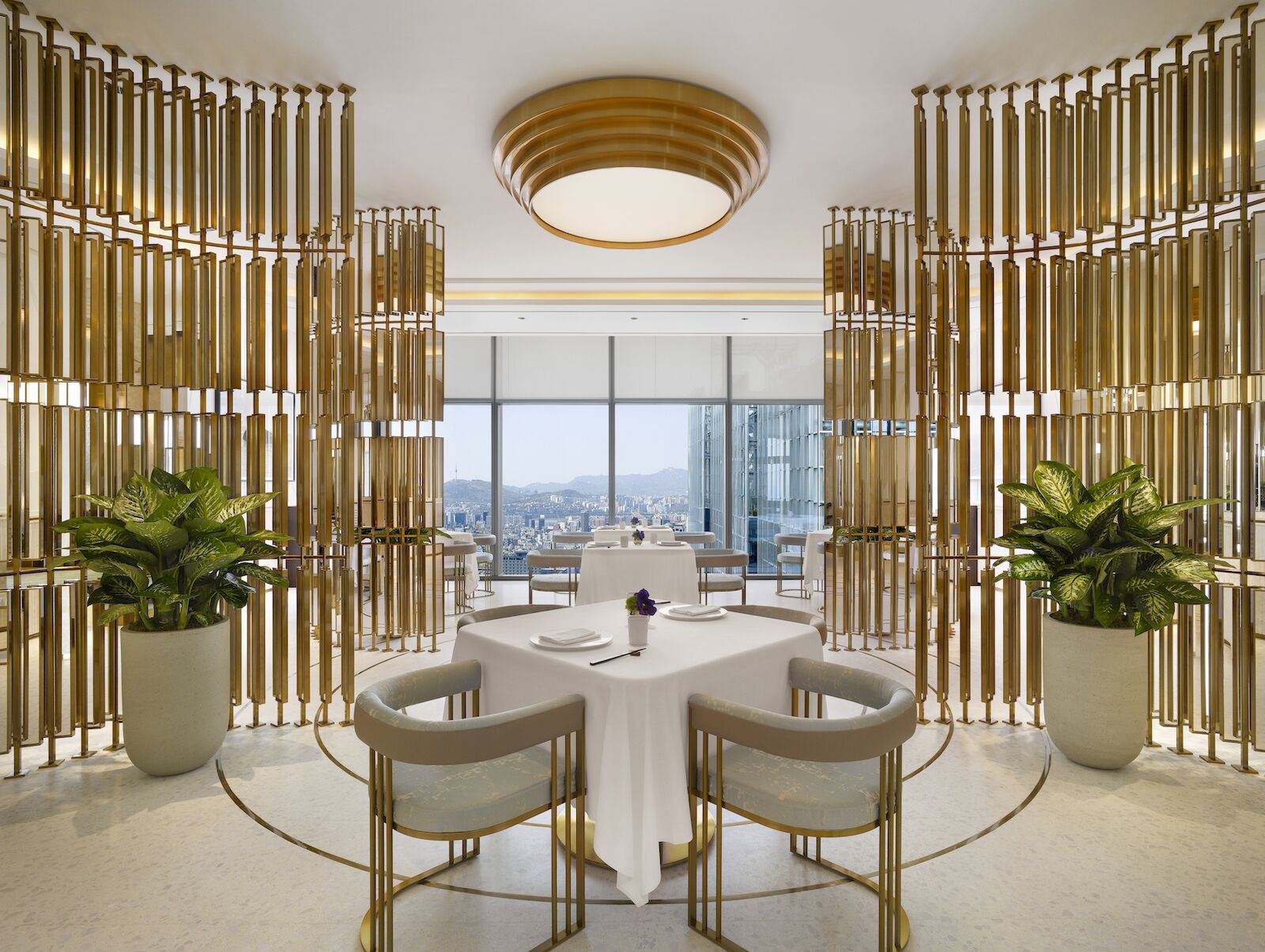 Eatanic Garden is in an airy garden space that opens up onto a spectacular city view in the heart of Gangnam, one of Seoul’s most vibrant and upscale neighborhoods. This one-Michelin-star restaurant focused on contemporary Korean cuisine is one of the most sought after places to dine in Seoul.

Located at the newly opened ultra-lux Josun Palace hotel on the 36th floor, it can seat up to 48 people. The glamorous gold and white stylish designs make you feel like you’re stepping onto a Great Gatsby movie set.
Chef Son Jong-won’s combination of culinary artistry and wit has made him one of Korea’s most celebrated restaurateurs. When Eatanic won its first star in 2022, Son became the first Korean chef to run two Michelin-starred restaurants.

Nine-course meals are available in Eatanic Garden for both lunch and dinner. Instead of a traditional menu, diners are offered an illustrated guide to the ingredients in each dish.