Much fanfare accompanies sitting down for dinner at a Korean barbecue restaurant. There’s the party-like atmosphere at many of these establishments, the oversized beers, the cacophonous conversation from other tables, and the satisfying sizzle emanating from the grill. And then there’s the food itself. The smell of charcoal and smoke and the crunch of meat from nearby tables is sure to get your stomach rumbling, but for first-timers, the menu might take a moment to navigate. Not only are there the banchan (side dishes) and drinks, but you’ll have to sift through an encyclopedia of meat cuts before deciding what you want.

There are the more familiar items, like bulgogi (thin slices of beef or pork) and galbi (beef short ribs), but you’ll also likely encounter some cuts that are lesser known to American diners, like beef tongue and pork jowl. To get a headstart, we’ve compiled a near-complete list of meat cuts you might come across on the menu. Though you might find duck and seafood options at some restaurants, we’ll just be covering the most common meat cuts at a Korean barbecue restaurant: beef, pork, and chicken, each of which is cooked on the grill at the table.

A few terms to remember: gui refers to grilled dishes in the world of Korean barbecue, so you might see the term galbi-gui (grilled short ribs) on the menu. Marinades are all important in Korean barbecue, and special designation is given to marinated and unmarinated dishes. Look for saeng on the menu, which means raw in Korean, but in this context simply translates to unmarinated. On the other hand, the term yangnyeom refers to a meat that is marinated. So if you see saeng-galbi, that’s the non-marinated version of short ribs, while yangnyeom-galbi is the name for the marinated version.

Keeping all that in mind, here are the most popular cuts of meat to try at a Korean barbecue restaurant. 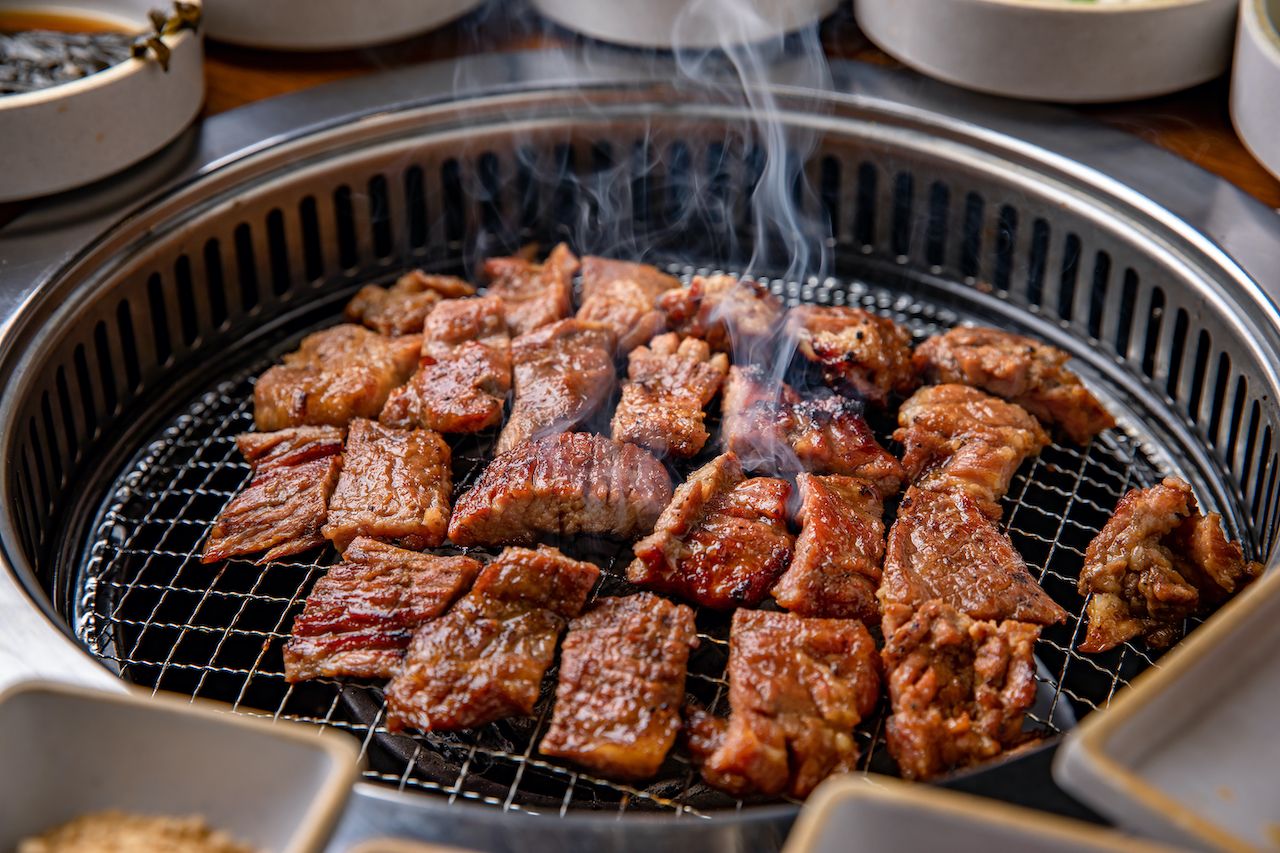 Beef short ribs (galbi or kalbi): Probably one of the most well known and beloved cuts of meat in the pantheon of Korean barbecue, galbi, sometimes also spelled kalbi, are thick beef short ribs. Traditionally cooked over wood charcoal, galbi uses a ganjang-based (Korean soy sauce) marinade. Galbi is sometimes served in ssam (lettuce wraps), and is topped with chili paste. One prominent version of galbi served in the United States is called LA galbi, which is cut across the bone, resulting in thinner, longer strips of meat.

Sirloin, ribeye, or brisket beef strips (bulgogi): This grilled beef dish consists of marinated thin slices of beef sirloin, ribeye, or brisket (dak and dwaeji bulgogi are the chicken and pork versions, respectively). The classic bulgogi — which translates to fire meat — marinade consists of soy sauce, rice wine, sugar, sesame oil, and garlic. Another popular way to prepare bulgogi is to stir fry the meat. The finished dish is typically served on a bed of rice or noodles, adorned with mushrooms and scallions.

Thin cut rib meat (kalbisal): Also known as galbisal, the name for this cut means “rib meat.” The meat has been cut off bone, and chopped into small, bite-size pieces.

Finger short ribs (nook gan sal): So named because the size and shape of these strips of beef resemble fingers, nook gan sal are a less common style of short rib. 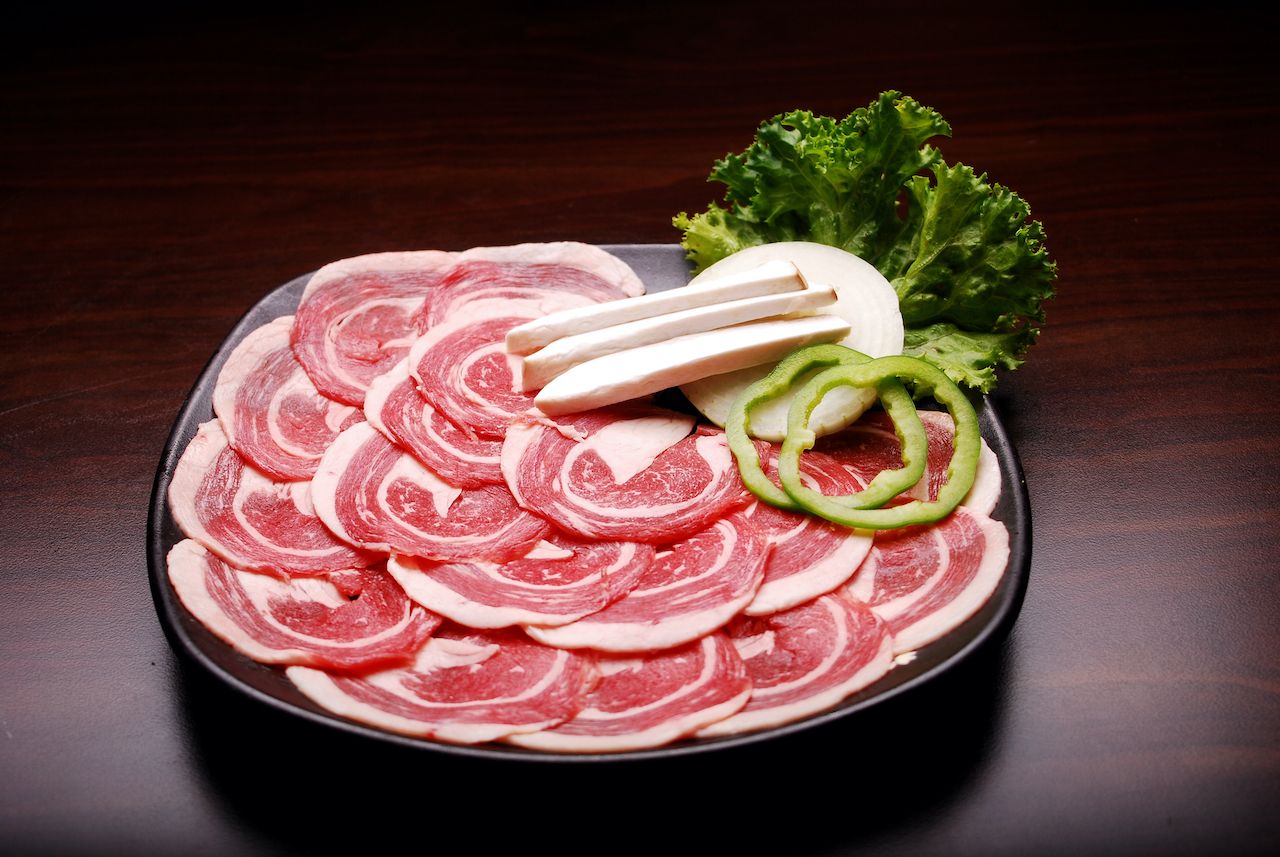 Chimasal (flank steak): Flank steak is cut from the abdominal muscles of the cow. It’s one of the most lean cuts of beef, with very little fat marbling, and cooks quickly.

Thin sliced brisket (chadolbaegi): Because these paper thin slices of brisket are not marinated before being grilled, they’re immediately dipped in a sesame oil, salt, and pepper sauce after being cooked. The process is quick — it sometimes takes as little as ten seconds — and results in a melt-in-your-mouth texture.

Beef tenderloin (andeungsi): This lean cut of tenderloin beef is well marbled, which helps it stay juicy and flavorful while cooking. 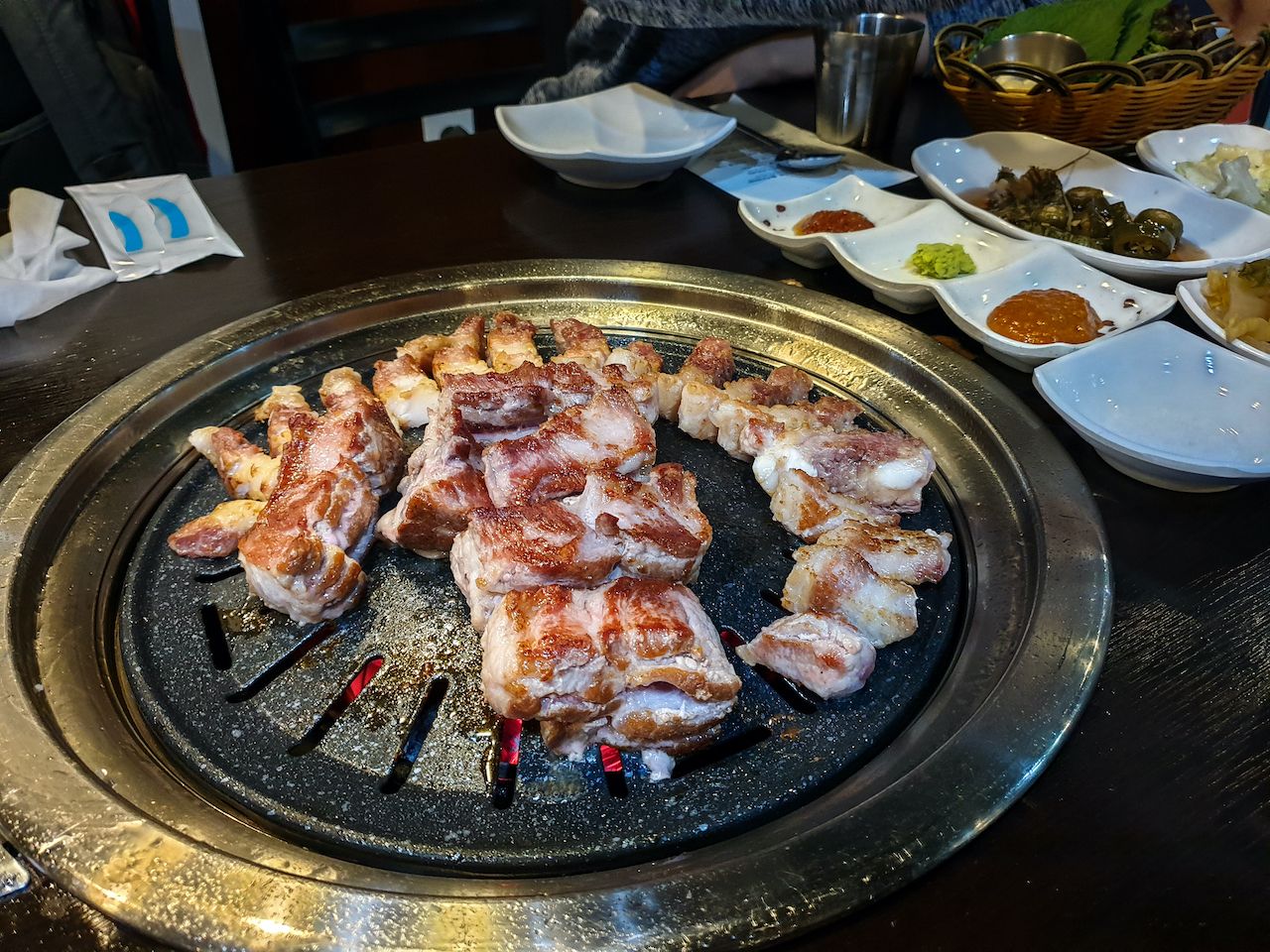 Pork belly (samgyeopsal): Among the most popular Korean barbecue pork cuts, some urban legends say that Korean miners popularized fatty pork belly. After the pork belly is grilled, the slices are dipped in red pepper paste, soybean paste, or sesame oil or served in a lettuce wrap. The name samgyeopsal means “three layered meat,” a reference to alternating layers of fat and meat.

Pork chop (moksal): Though “mok” means neck in Korean, these pork chops are actually derived from the pig’s shoulder. Moksal isn’t served whole, but rather cut into smaller pieces during the grilling process.

Pork skirt-meat (galmaegisal): This leaner cut of pork is often favorably compared to beef because of its dark color and meaty flavor. Galmaegisal is a homonym for seagull in Korean, but there are no birds involved. At some restaurants, the grill on which the pork is cooked sometimes features a deep ring on the outside filled with egg, cheese, and kimchi. The egg cooks at the same time as the pork, and they are often eaten together.

Pork jowl (hanjeongsal): Reminiscent of short strips of bacon, well marbled pork jowl tends to be on the chewier side, but the fat is often cooked until crispy for a satisfying combination of textures. 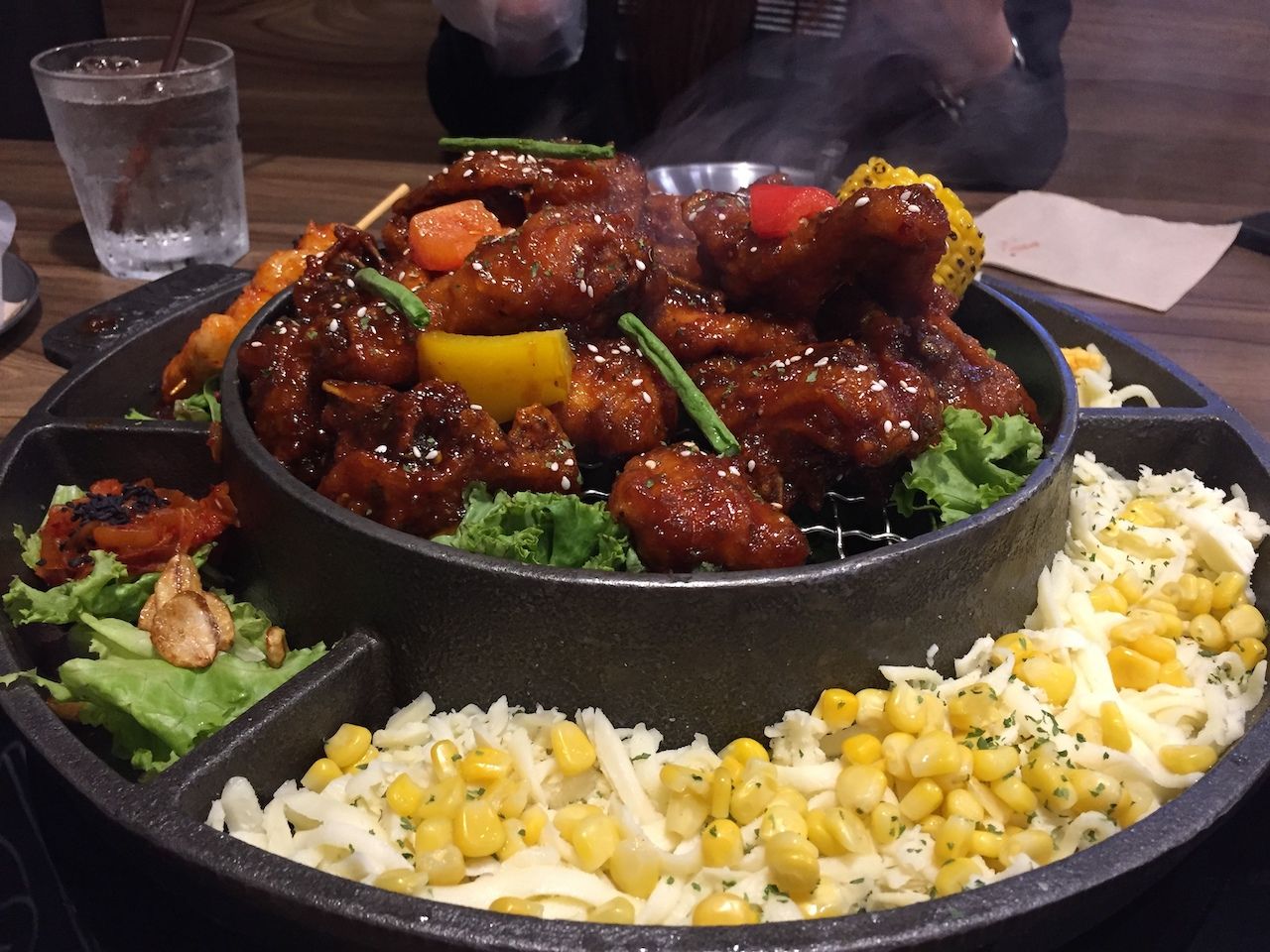 Chicken thighs: Chicken isn’t nearly as popular at Korean barbecue restaurants as beef or pork, and you’ll usually always find it marinated to combat its bland flavor. Chicken thighs marinated in a spicy garlic marinade is one of the most common cuts available.

Buldak: A spicy-sweet sauce is the signature ingredient of “fire chicken.” Bone-in chicken thighs marinated in this deep red dressing are charred on the grill. Though they can be eaten plain, a gooey layer of cheese is sometimes added to the top of the cooked chicken.