While searching for edible herbs, the divine farmer Shennong, the mythological emperor of China credited with introducing China to agriculture and inventing the cart and plow, poisoned himself over and over. Just as the poisons were about to take his life, a leaf drifted into his mouth. He chewed it and discovered his body had healed. That’s how China discovered tea, or cha in Mandarin. At least according to legend.

The truth is a little less romantic but no less interesting: According to a brief history of tea written by historian Shunan Teng, the first teas were cultivated in China around 6,000 years ago, though the tea leaves were first cooked like vegetables or eaten with porridge. Tea became one of China’s most prized exports alongside porcelain and silk. Tea spread from China across the globe through both trade and colonialism.

Today, tea is the most popular drink on the planet, second only to plain water. But at its core, tea is integral to the identity, culture, and politics of the Asian continent. The two are inseparable. Europe, and in England in particular, might have staked its own claim to tea-drinking traditions, but the continent had no idea tea existed until the 16th century, and the first European country to import tea from Asia was the Netherlands, not England. Dutch traders first imported tea from Japan to Europe in the 1600s.

A Portuguese princess named Catherine of Braganza, who married King Charles II in 1662, is generally credited with popularizing tea as a drink of the elite in England, but it didn’t become the staple of British culture it is today until Anna, Duchess of Bedford, began serving it at lunch around 1840.

Today, the most popular and best-tasting teas are still sourced almost exclusively from Japan, India, China, Sri Lanka, and Taiwan (however, several countries in Africa and South America now grow tea as well). Each country has its own regions and specialties. Taiwan specializes in oolong, for example, while Japan favors green tea.

Here is a brief primer on the history and tea specialties of the five major tea growing countries. 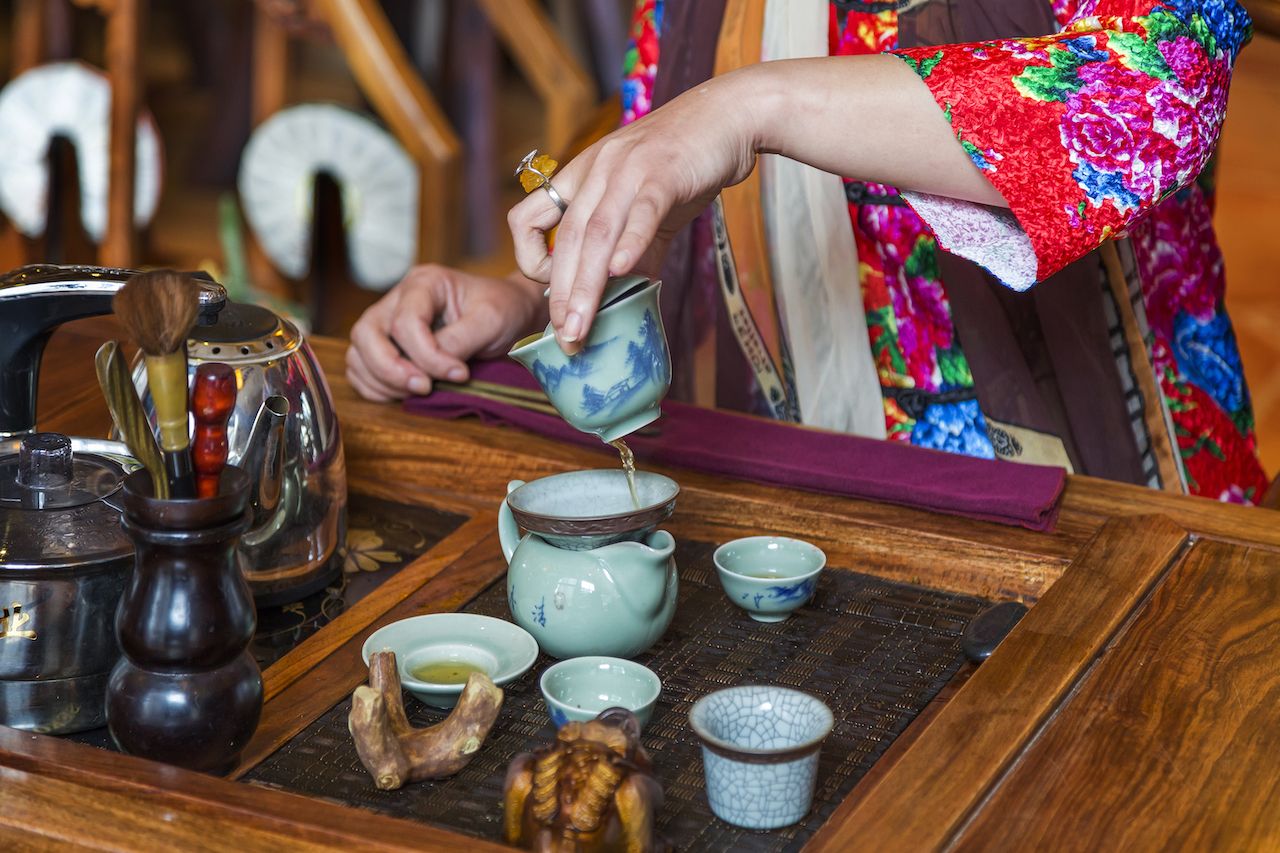 Tea is the beating heart of Chinese art, cuisine, politics, and philosophy. According to Michael Freeman and Timothy O’ffay’s book The Life of Tea, Chinese farmers were almost certainly the first people to domesticate tea plants and cultivate them commercially. China is still the largest producer of tea on the planet, cultivating around 35 percent of the tea exported across the globe. It’s also the world’s largest consumer of tea, drinking around 1.6 billion pounds of tea leaves every year.

The Zhejiang province is famous for its green tea, and longjing (or dragon well) tea in particular. Longjing’s jade leaves are harvested in April and prized for their nutty, toasted, warm aromatic flavors. Meanwhile, in Anhui province, the speciality is black tea. Qimen, harvested in Anhui, is China’s premiere black tea and is featured prominently in many English Breakfast blends. The foggy mountains in the region let in little sunlight, which increases the chlorophyll level of the Qimen tea leaves, resulting in a fruit forward, floral, and more mellow black tea.

China also specializes in oolong teas, and the Phoenix Mountains in Guangdong produce some of the best in the world. These tea plants are not pruned into bushes but rather cultivated into full grown trees. The resulting teas are called dan cong, or single bush oolong, because each batch must be picked from an individual tree, or at least from the same grove of trees. 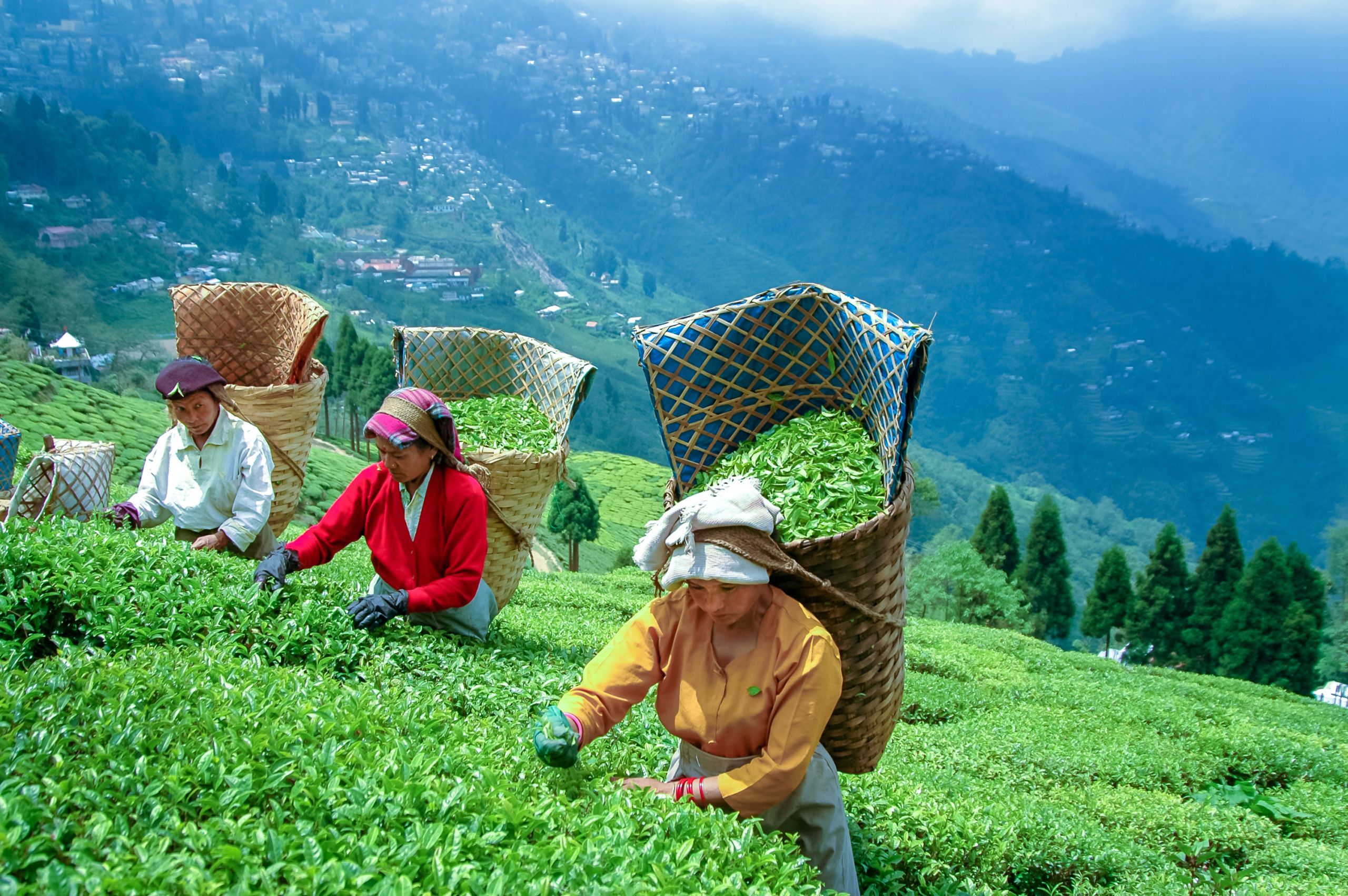 According to some legends, masala chai has been consumed in India for at least 5,000 years as a medicinal Aruyvedic beverage, and Camellia sinensis grows wild throughout the country. However, the first commercial tea plantations in India were established by the British in 1834 in an effort to abolish China’s monopoly on the tea trade. By the 1700s, the British were buying millions of pounds of tea from China every year, and they were running out of ways to pay for it. They tried opium, but China banned it in 1729, which resulted in more than a century of illegal smuggling and two Opium Wars. According to Michael Freeman and Timothy O’ffay’s book The Life of Tea, the British needed a steady supply of tea that wasn’t tied to the tumultuous political situation in China. The first seeds were planted in the Calcutta Botanical Gardens, and the resulting 200,000 plants were spread throughout India’s three main tea-growing regions: Darjeeling, Nigiri Hills, and Assam.

Potent black breakfast teas, which are typically described as having a malty or honey flavor, are grown in Assam. The Darjeeling region in West Bengal is more diverse and produces black, green, white, and oolong tea from the Camellia sinensis, rather than assamica, plant. In the smaller Nilgiri Hills region, fragrant and smooth black teas flourish though they are less well known than their cousins in Darjeeling and Assam. 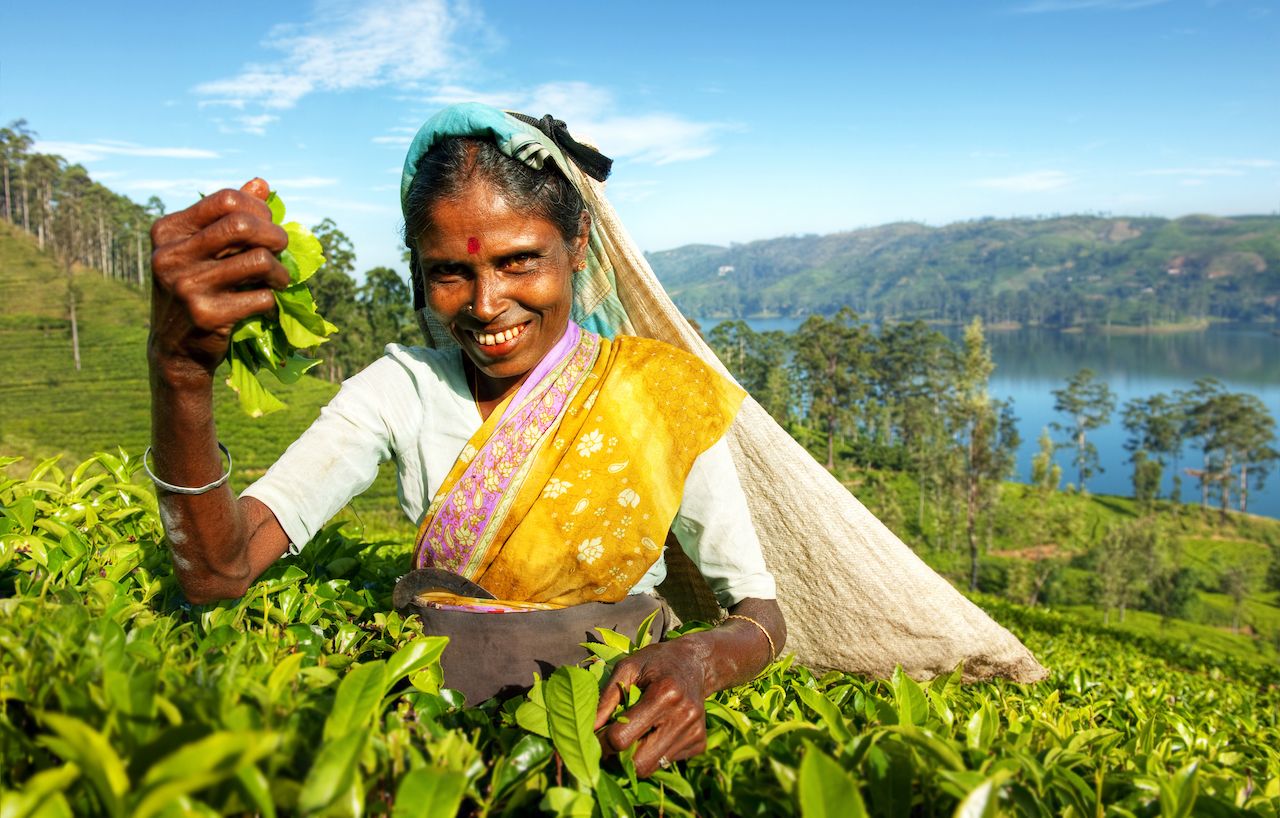 In 1824, British merchants brought the first tea plants to what was then called Ceylon and is now known as Sri Lanka. Commercial tea growing would not begin in Sri Lanka for another 43 years when a businessman named James Taylor planted a tea plantation on his estate. The Sri Lankan tea business didn’t really take off until around 1890, however, when Thomas Lipton, at the time a grocery store mogul, stopped by Ceylon on his way home from vacation. Eager to sell what would become known as instant tea in his shops (tea leaves sold in packets rather than as loose leaves), he purchased three former coffee plantations and set up his tea-growing operations. 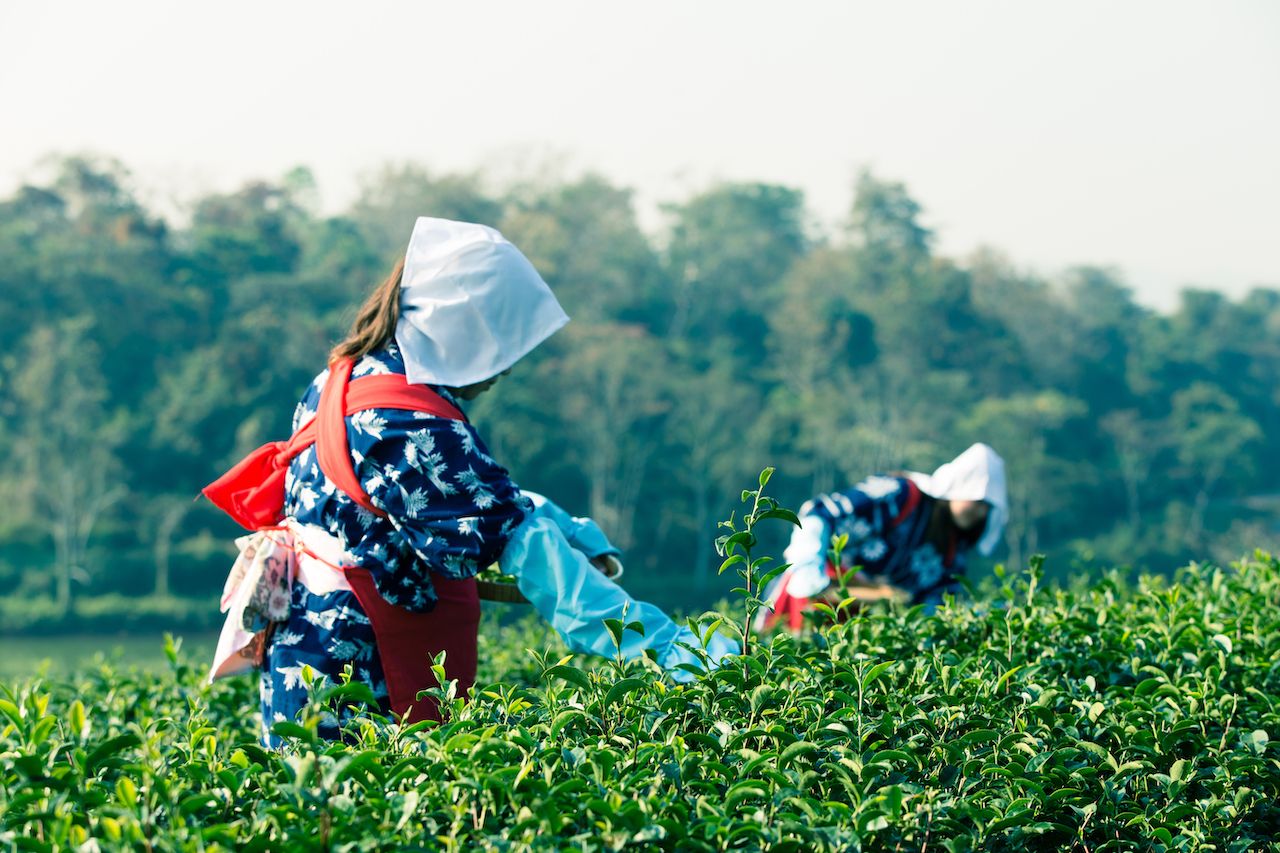 In the 12th century, a Buddhist monk named Eisai went on a pilgrimage to China and brought the first tea plants back to Japan. Since then, Japan has developed its own rich traditions and rituals around the beverage. In the 16th century, Rikyu Sen, a tea master, introduced the art of the tea ceremony to Japanese society. There are at least six major tea growing regions in Japan, arguably the most famous of which are Shizuoka and Uji.

Although Shizuoka produces the most tea in Japan, accounting for 40 percent of the country’s tea plantations, it’s generally agreed that Uji produces the best-tasting tea. Known as Uji Gyokuro, it is the highest grade Japanese green tea. This tea is shade-grown, which increases the chlorophyll in the leaves, resulting in a bright green hue and a creamy, sweet flavor.

Today, green tea, or ryokucha, is by far the most widely produced and consumed tea in Japan and is beloved for its medicinal properties. Green tea is consumed in two principle ways in Japan: Sencha, the most widely consumed variety of green tea in Japan, involves simply infusing the whole dry tea leaves in hot water. Matcha, which recently grew more popular in the West, is finely ground green tea leaf powder that can be infused into noodles, ice cream, and coffee. 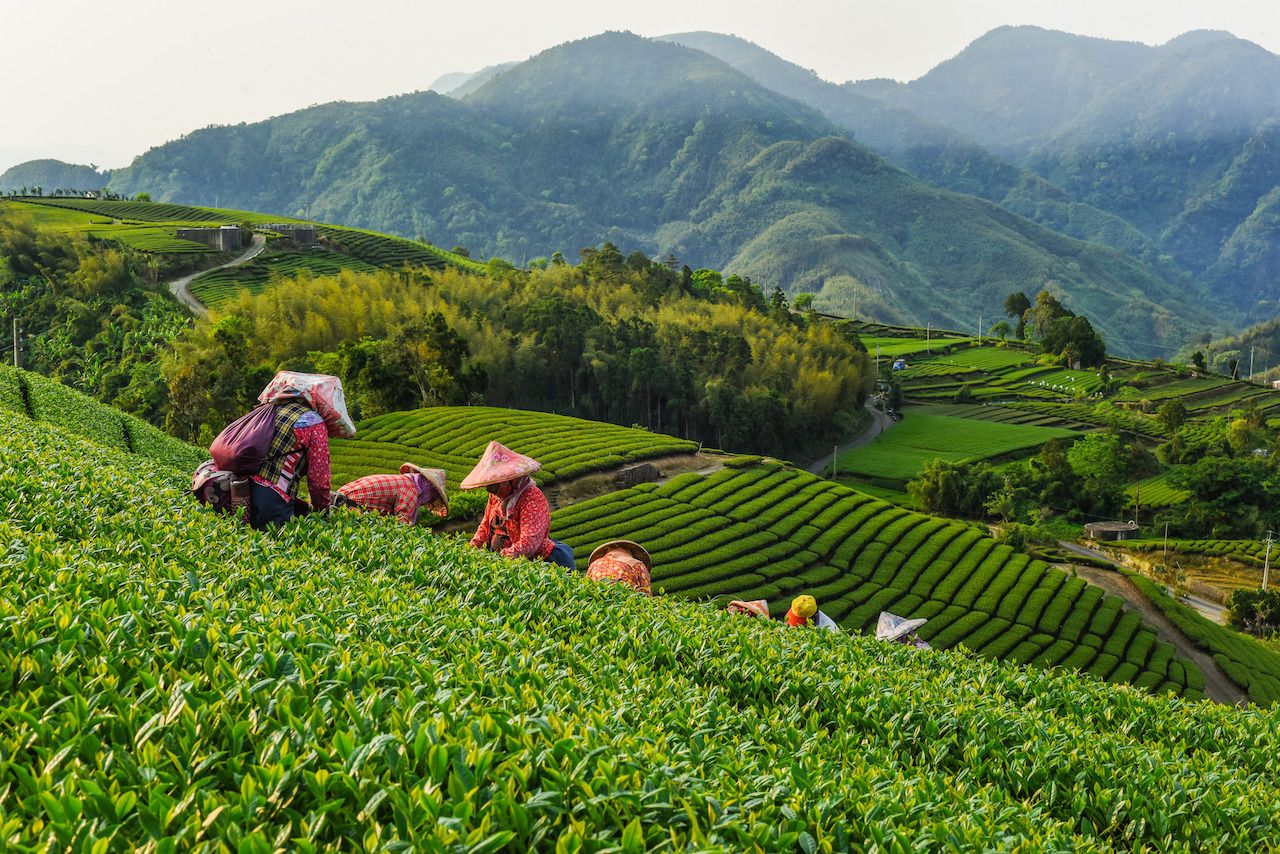 In modern Taiwan, a common greeting to guests is, “Come in and drink tea,” but the Dutch East India Company is responsible for introducing the island to tea. In 1623, the company used Taiwan as its base of operations for trade between China and Japan. In the late 17th century, the company reported that wild tea leaves were found growing in Taiwan. Still, at first the Dutch East India Company only commercially farmed sugar and rice in Taiwan. Soon, however, traders from Fujian province in China brought over tea trees, which thrived in Taiwan’s climate.

It wouldn’t be until the mid-19th century that the tea trade would really take off in Taiwan however. In 1855, small oolong trees were imported from the Wuyi Mountains in China, which resulted in a now prized variety of Taiwanese tea called Dong Ding oolong. By 1970, oolong became the most beloved, and most widely cultivated, tea in Taiwan.

CultureHow To Make Tea the Berber Way
Tagged
Coffee + Tea Asia
What did you think of this story?
Meh
Good
Awesome

How To Experience Gardens by the Bay, Home To the Largest Glass Greenhouse in the World