In J.R.R Tolkien’s The Lord of the Rings series, food is a major character. A good meal makes life worth living for his heroic hobbits, specifically. December 19, 2021, marks the 20th anniversary of the release of the first film in the now iconic trilogy, and while some people might remember the masterful filmmaking or captivating storytelling, I’m still fascinated by all the ways that food pops up in the movies — in particular lembas bread, which are cakes imbued with the elvin magic that can supposedly sustain even the strongest, brawniest men over long journeys.

It’s a dream food for anyone who has debated the perfect fuel to take with them on their journeys. Sure, there’s plenty of advice out there on ideal snacks for hikers, food for backcountry skiers, and what backpackers who want to eat more than trail mix should put in their packs. But a sustaining cake that is both filling and energizing? That, unfortunately, is lacking.

So I decided to make my own. Not just to pay homage to a teenage obsession that I frankly have never given up, but to determine if some (non-magical) version of lembas bread really is worth taking along in your pack on your next big outdoor adventure.

What is lembas bread in Lord of the Rings?

Tolkien writes that lembas bread is “made of meal that was baked a light brown on the outside, and inside was the colour of cream.” The elves of Lórien that give the bread to the fellowship instruct them to, “Eat a little at a time, and only at need. For these things are given to serve you when all else fails. The cakes will keep sweet for many many days, if they are unbroken and left in their leaf wrappings…One will keep a traveler on his feet for a day of long labour.”

In other words, it’s pretty much exactly what the fellowship needs to maintain their vigor as they traverse the treacherous, sometimes barren landscape of Middle Earth — especially when you’re being pursued by murderous orcs and there’s little time to stop for a hot meal.

Lembas bread isn’t particularly satisfying for the food obsessed hobbits. In the extended edition of The Two Towers, Legolas warns the hobbits that just a bite of lembas bread will fill the stomach of a grown man. Pippin replies that he’s already eaten four whole cakes.

But what about for the average human person, who isn’t necessarily planning a years long walk across mountains, swamps, and underground tunnels? Could homemade lembas bread be a suitable snack for a mildly taxing hike, perhaps?

How to make lembas bread 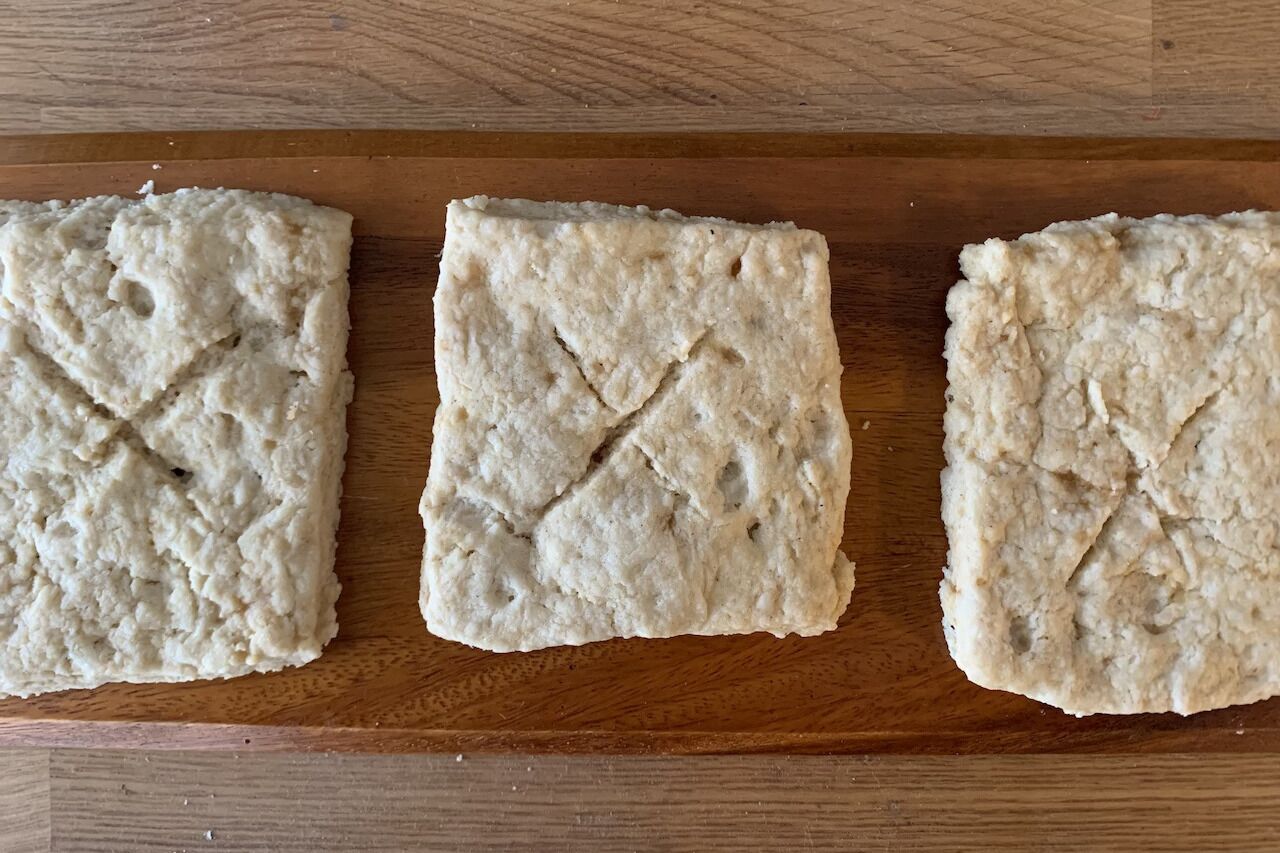 In my quest for answers, I scoured the internet for the recipe that best represents what I pictured lembas bread to be. In a scene from The Two Towers, an exhausted Frodo and Sam rest on a craggy mountain side. Sam removes packets of lembas bread from his pack, crumbling and wrapped in leaves, and he laments that it’s all they have left to eat. That’s how I decided my version of lembas bread should look: A cross between shortbread and a cracker that should snap if you break it in half.

I found recipes online that include orange blossom and almonds, but I also always imagined lembas bread as stale and bland, so I decided to forgo recipes that included these ingredients. I eventually settled on this recipe I found on Reddit that gets just a touch of sweetness from honey and a drop of vanilla extract. The other ingredients include flour, sugar, baking soda, and cream — all things needed for a filling snack that provides some energy.

The dough came together easily enough, but it took some experimentation to get the texture right. I ended up baking the square cakes for about a half an hour in order to achieve that snap and golden brown color.

Does lembas bread hold up on a hike?

We decided to pack up our lembas bread (wrapped in parchment paper, since I had no leaves on hand) and head to the North Jersey equivalent of the path to Mordor: The Meadowlands. It’s technically a bird sanctuary, but the swampland vibe is the same as the Dead Marshes, as featured in The Two Towers, except New York City is in the background, and there are more majestic herons than restless spirits.

While I didn’t have to carry the One Ring, I did have something equally as heavy: My three-month-old daughter strapped to my chest. We followed the main path, which is part gravel, part dirt and winds around a reservoir that many peaceful ducks call home. The weather resembled a spring day in the Shire. After about an hour, we found ourselves unexpectedly sweaty. Armed with just a canister of water and my version of lembas bread, we decided to park ourselves on a bench and take in some sustenance.

I broke off a corner of one of the cakes for myself and my partner, who remarked that he enjoyed the buttery texture and hint of sweetness that gave an otherwise plain cake a touch of character. “I could eat three of those,” he said. 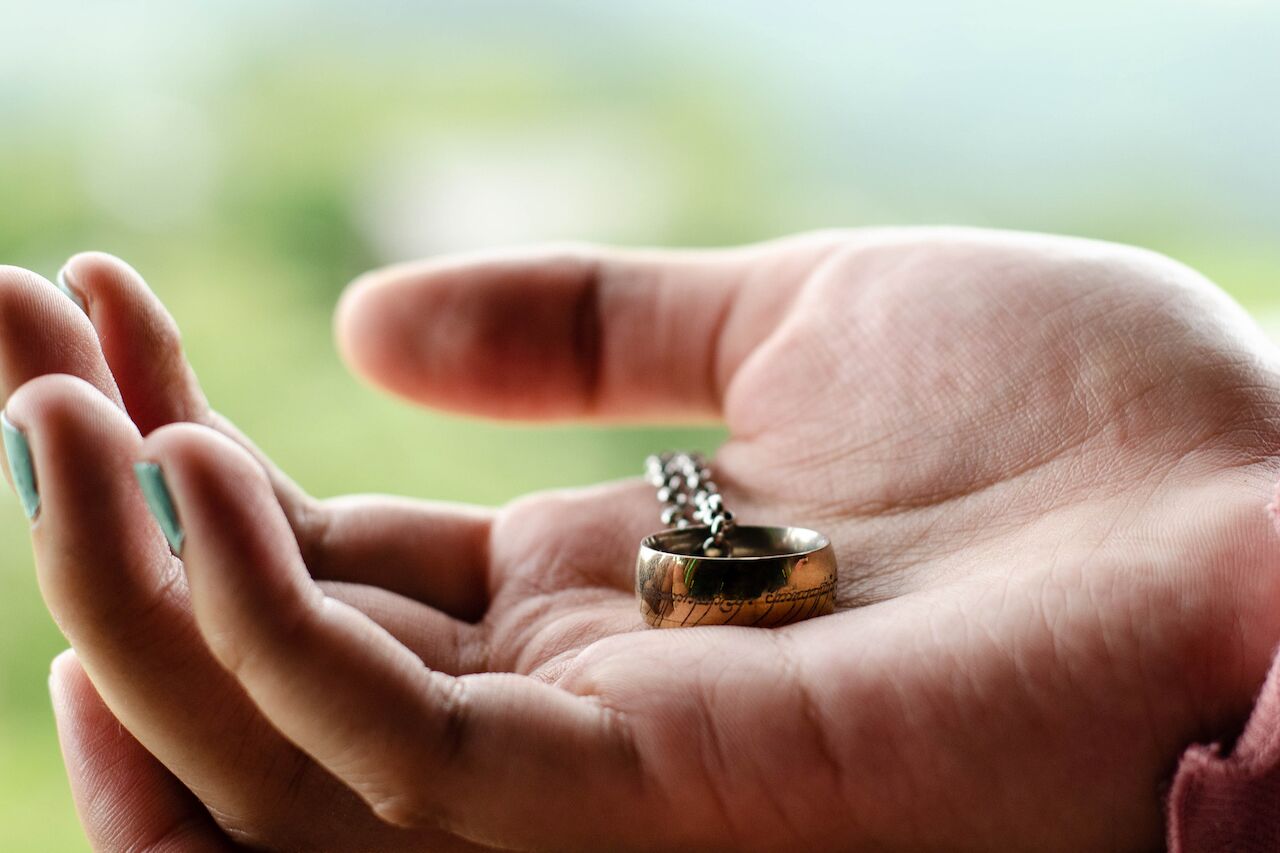 Okay, so it wasn’t exactly enough to fill our stomachs to satisfaction (unfortunately I am not blessed with elven magic), but it did give us the necessary fuel to continue on our journey. It had that crumbly texture that mimicked the real deal lembas bread from the movies, but my version resembled more of a shortbread cookie than a bread or cracker.

We walked for another hour or so until the wind became a little too bracing for the baby, and we decided to head back to the car. Lembas bread doesn’t contain any protein or ingredients that you might find in energy bars, like nuts or chia seeds, that generally give your body the fuel it needs to exercise. So, of course, serious hikers will need to take more substantial fare on their excursions. But it does have some sugar for a quick energy hit that you get from chocolate in trail mix, and it has carbs to sustain hunger for a bit.

For day trips and less challenging hikes, this version of lembas bread is light enough to carry, and it’s a sweet pick me up to enjoy when you start to get tired. If you’re planning to track a pack of orcs through Rohan, however, you’re going to need that elven magic.

Movies20 years later, here is how “The Lord of the Rings” has changed New Zealand
Tagged
Food + Drink Movies
What did you think of this story?
Meh
Good
Awesome

New Jersey sandwiches are an art form. These are the 9 sandwiches to try.
Ozarks cuisine is a blend of the best of Midwest and Southern food
Searching for the best Mexican food in Texas? You need to visit El Paso
Amtrak food and drink options: Everything you need to know before your next train trip
The difference between butter chicken and chicken tikka masala

‘Black Widow’ showcases one of Europe’s most underrated, cinematic capitals

Are guided theme tours enlightening or infuriating? We try and settle the debate

You can stay in this amazing English cottage from Downton Abbey