Fancy a pint? The United Kingdom is the place to be, according to this map posted to Reddit, which claims to show every pub in the country. If there’s one clear take away, it’s that you’re never too far from a good pub.

The red darkens the closer one gets to London. Manchester and Liverpool are also quite swamped, but further north the density of pubs lightens with the density in population. 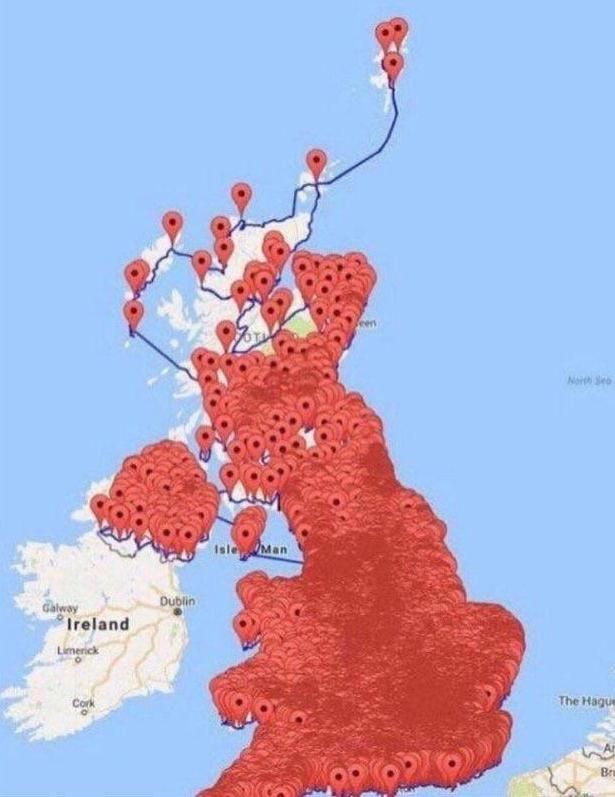 One of the most impressive feats of UK drinking habits lies in the fact that more than one Redditor commented on the incompleteness of this map. When it comes to drinking, even Google can’t quite keep up with the British. “This is only a tiny fraction of the number of pubs. I looked up “pubs in Isle of Skye” on Google maps and was shown literally hundreds of results. But OP’s map includes no pubs on the Isle of Skye at all,” noted user Speech 500.

Many commenters expressed reservations about whether there is another country around the world could keep up. “I don’t suppose there is any single type of business in the U.S. or Canada that comes even close to that density per capita!” Redditor Kit_Dit boasted. There were but a few retorts from others. Wisconsin had the best chance, though confidence was low that even the Badger state stood a chance. “As another way of looking at it, there are more pubs in the UK than there are Starbucks in the world,” Redditor Speech500 added.

Users also took to calling out any part of the UK map not covered completely by red marks. “It appears that Fermanagh and Caithness are a right pair of dry shites,” said user punchdrunkskunk (definitely the most appropriate username of any in the thread).

No matter where you’re at in the world, this map certainly makes one ready for 5:00. “Ultimate Pub Crawl?” Redditor valhyl asked. We’re game, but hope someone can map out the best happy hour route because these bartabs are going to add up quick.