Many eons ago, various land mammals decided to return to the sea, evolving fins and flippers to survive in their aquatic home, and marine mammals were born. Later, evolution gifted some of them permanent smiles, as seen on the bottlenose dolphin, or saucer-sized eyes capable of melting even the most stoic of human hearts, as we see with baby seals. Whatever it is about each species that appeals to people, marine mammals are inarguably a beloved collection of creatures.

Which is why it’s time to stop and reconsider the use of drones to capture footage of these sensitive animals, particularly given the rise in popularity of using this technology to see them from perspectives previously reserved for professional filmmakers dangling out of helicopters.

A recent study out of the City University of New York (CUNY) researched the effect of drones on the behavioral impact of various marine mammals, essentially looking to see if the unmanned aerial vehicles disturb their subjects. Considering that, according to NASA, the incessant whine of a drone is disturbing to humans, and that these machines are widely used in capturing footage of marine mammals, PhD candidate Eric Angel Ramos decided it was time to look at the relationship between the two.

Underwater noise, particularly from boats and ships, is a well-documented disturbance to marine wildlife, let alone the other risks sea vessels bring. One of the best examples of this is following 9/11, when shipping around the US was halted for security purposes. Ongoing studies with whales showed a significant decrease in stress as waters quieted from the loss of nonessential boat traffic, proving that they are in fact aware of, and bothered by, noise made by human inventions.

So it stood to reason that drones could cause a similar type of stress. However, “Bottlenose dolphins rarely responded when followed by a drone,” says Ramos, adding that those that did respond did not give a strong reaction. Antillean manatees, on the other hand, were greatly disturbed by the presence of a drone. “About a quarter of exposed individual manatees exhibited responses, changing their behavior state and fleeing the approaching aircraft at altitudes of 6-104 meters (20-341 feet),” an incredibly wide range. Ramos believes dolphins are more affected by seeing a drone approach, whereas manatees are probably triggered to flee by the sound. 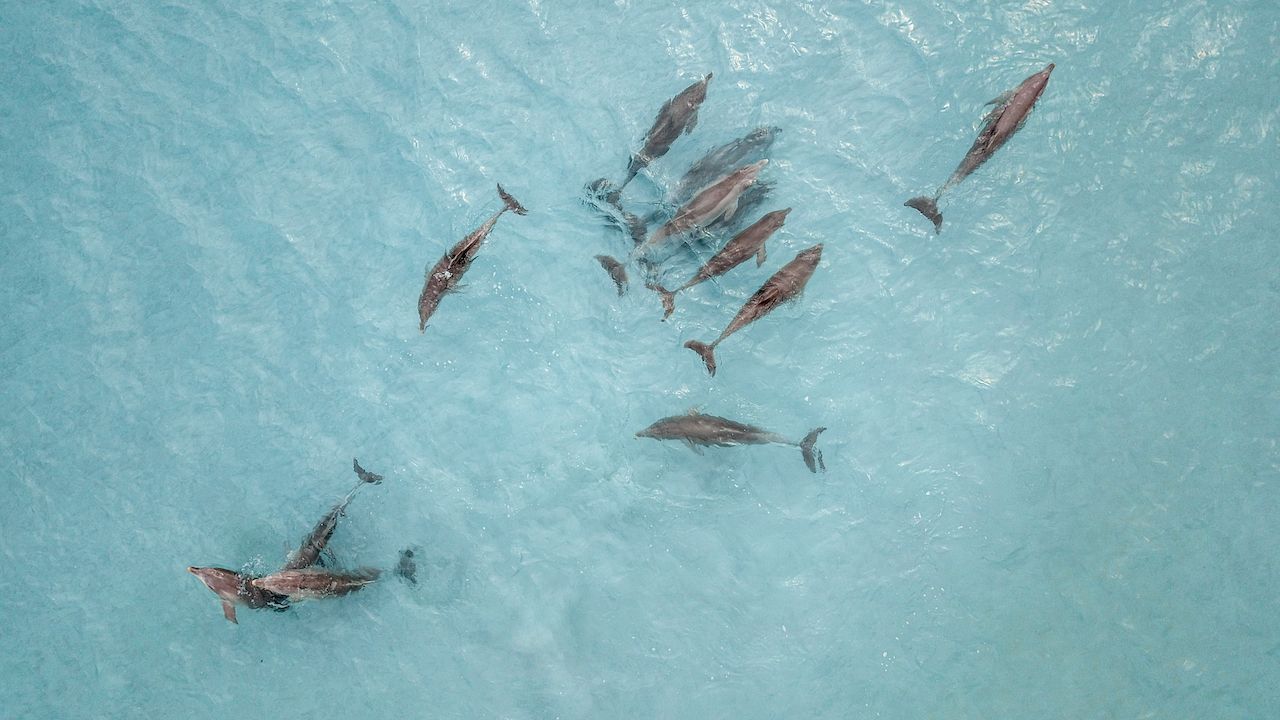 Unfortunately, only animal behaviorists are skilled at telling the difference between responses. Drone footage of wildlife is a hot trend, and an animal running or swimming away doesn’t necessarily seem like fleeing to the average eye. This video of a bear and her cub that made the rounds online recently shows that the animals were terrified of the drone filming them, and lost precious energy required for survival in their attempt to escape.

“Drone use by tourists in general is on the rise. I haven’t seen numbers on it, but I see tourists everywhere flying drones,” Ramos says. It’s also becoming more popular among the academic world of wildlife, but researchers are typically taking into account the effects of their equipment when gathering data, and are therefore conscientious of when they get close enough to an animal to disturb its natural behaviors. Tourists and hobbyists do not seem to share this affinity for respecting personal space, causing harm to marine mammals. “This can have serious consequences,” Ramos adds, “because it drains animals energetically and puts them in water at times where there could be predators they otherwise could have avoided.”

As we gain greater understanding of our impact on wildlife, and the way we intentionally misinterpret their behavior to benefit us personally (dolphins aren’t smiling, they just have curved mouths), it’s essential to learn the ways in which we can work with animals instead of at their expense. “If you fly a small drone around marine mammals you need to be careful and fly in ways to specifically avoiding potentially disturbing them,” explains Ramos. Of course, these specific approaches will vary species by species, as seen with the dolphins and manatees in this study. “Different species have different sensitivities, but you should generally avoid flying directly at any animals or go to close to them.”

Deciding to use a drone to film marine mammals should fall under the same considerations as any wildlife interaction. “You should find responsible tour operators for wildlife trips,” Ramos advises, explaining that irresponsible guides may drive a boat too quickly near dolphins or ignore signs that animals are disturbed by their presence. “A responsible one will drive in certain ways around animal groups to avoid harassing them. Whale watches can do serious harm if boats disturb animals and little harm if they know what they’re doing.”

The very least we can do is take the time to learn about the marine mammals we love, so we can better respect them. And if getting content is incompatible with properly loving these animals, then so be it.

NewsIceland’s open-sea beluga sanctuary welcomes its first whales
Tagged
Wildlife
What did you think of this story?
Meh
Good
Awesome

These are world’s coolest ski gondolas (unless you have a fear of heights)
5 states with the most scenic and laid-back nude beaches
The 9 cutest baby animals born in 2021
Everything to know about ice hotels, from staying warm to using the toilets
The ultimate guide to all 2022 national park permits in the US for hiking, backpacking, and more