Marquette is not exactly a glowing spot on the radar of the world’s top winter travel destinations. But for a growing number of outdoor adventurers, it’s becoming one. Located on the south shore of Lake Superior on Michigan’s Upper Peninsula, the town of around 21,000 is one of the snowiest in the country, receiving a yearly average of nearly 150 inches that are preserved by winter temperatures that rarely sneak above 30 degrees — often dipping into the subzero range. But this doesn’t stop the Yoopers (UP locals) from frolicking in their frigid playground, and a person can’t help but catch a dose of the viral adrenaline.

I was invited to participate in the annual Polar Roll fat bike event in February, and found that in stark contrast to many ice-covered cities where locals spend the winter shivering and grumbling, Yoopers not only revel in their rare and robust forms of snowy adventure, but are also perhaps the friendliest Americans you’ll ever meet. Their beer and food proved pretty impressive, too.

In the UP, winter is racing season 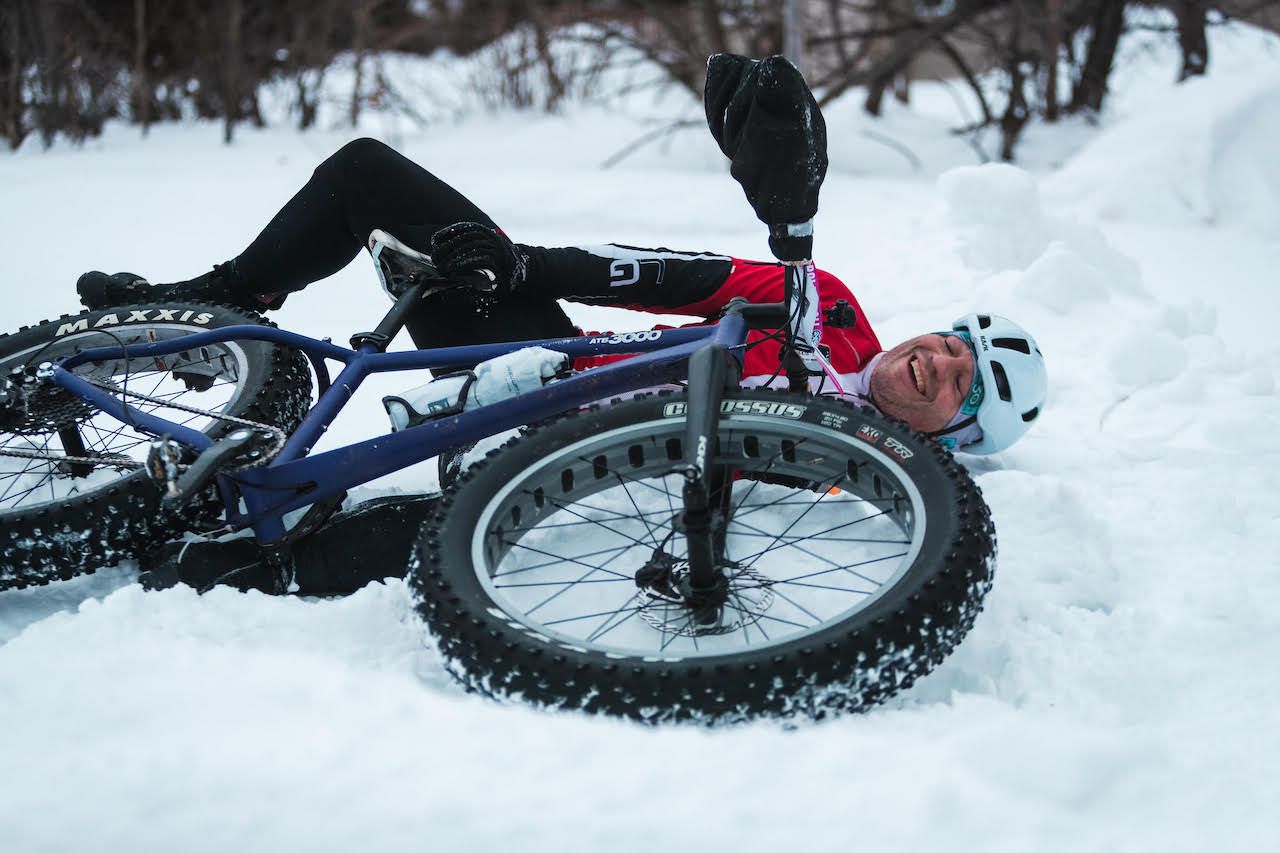 Marquette’s regular winter sporting events include the UP 200, a competition that just celebrated its 30th running this February, in which 12 world-class dog sled teams spend four days racing across 230 miles of the Upper Peninsula along the south shore of Lake Superior to Grand Marais and back; the Michigan Ice Fest, featuring top ice climbers from around the globe; and several cross country ski and snowshoe races. The race that brought me to Marquette was the Polar Roll, Michigan’s largest fat bike event. Launched in 2015 by 906 Adventure Team, a nonprofit organization aimed at improving the lives of children (and adults) through outdoor adventure — mostly of the two-wheel variety — the Polar Roll is a fat bike race taking participants through the hilly, wooded, snow-covered singletrack surrounding Marquette County.

This year’s event took place on February 15 and 16. Registration opens in early November, and fills up quickly. En route, connecting through Chicago on a small plane to Marquette’s wonderfully simple airport, I began eavesdropping on the conversation behind me. Its sentiment would become my own mantra for this quirky, isolated corner of the Midwest. The conversation involved a local man and a woman visiting from Pennsylvania. As they settled into their seats, the man asked where the woman’s travels were taking her and must have made a face when she answered, “Marquette.”

“Who would want to go to Marquette, right?” she joked upon seeing his reaction. Then she added, “…anyone who’s been there!” She was traveling to compete in the Polar Roll, which would complete her trifecta of 906’s endurance bike events, including a gravel race in July called The Crusher and a notoriously grueling mountain bike race called the Marji Gesick in September.

She would do the 30-mile version of the Polar Roll, whereas I was signed up for the 15-miler. A few locals referenced this shorter course as “the downhill race,” when in fact, it includes close to 1,300 vertical feet of climbing and a few short punches up hills steep enough to require post-holing on foot while pushing one’s bike. Increasingly popular, the Polar Roll sold out in less than 12 hours this year, capped at about 600 racers. This number included almost 20 percent women — up from 10 percent in the event’s first couple of years — due to 906’s efforts to grow female participation in bike racing by leaving registration open to female participation until race day.

Preparing for the Polar Roll 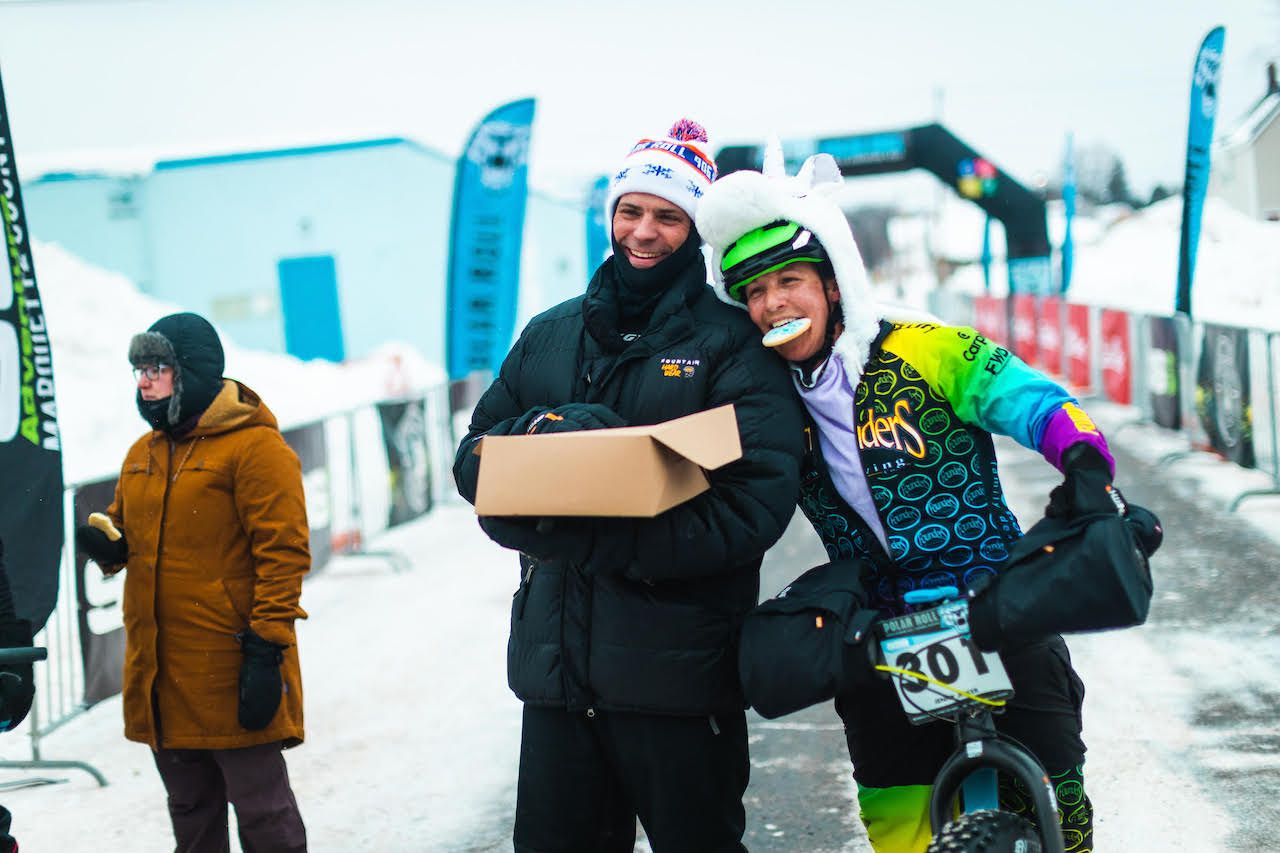 Although I am a former recreational mountain bike racer, my snow biking experience going into the event was minimal. However, after competing in Colorado ski town mountain bike races in which nearly every participant, albeit (mostly) friendly and respectful, ranged somewhere between super-competitive to full-blown bionic, I approached the Polar Roll expecting a similarly bloodthirsty field. After arriving into the nearby town of Ishpeming and borrowing a brand new and unbelievably lightweight Rocky Mountain fat bike from the trail-side West End bike shop, I joined the throng of racers who, to my surprise, reflected every level of athletic ability, age, shape, and size.

Yes, there were a handful of sleek cycling types who chose aerodynamic Lycra suits over the thick layers of outerwear most of us were wearing. There were also middle-aged women, teenagers, a few kids, and a fair share of tubby and bearded older men. I launched off the start line (while many around me meandered) and pedaled about a half mile through some hilly residential streets before the course funneled into windblown singletrack. Here, a few racers ahead of me immediately got off to push their bikes through this first stretch of narrow, soft trail.

“Come on, guys…step aside,” I called out, causing the poor woman in front of me to wobble and tip over into the snow. Feeling guilty, I surged onward nonetheless, buoyed by the amazing conditions of the course. The trail maintained a steady width of about 15 inches and was consistently cushy but not too soft — a factor that struck me as nothing short of a miracle considering the walls of snow everywhere, the high winds blowing intermittently, and several inches of snow that had fallen in previous days. The Yoopers, it turns out, are serious about maintaining their bike trails. So serious that two nonprofit groups — RAMBA and NTN, powered mostly by volunteers – regularly prepare 75 miles of snowy singletrack in and around Marquette using DIY contraptions such as a “V-Plow,” basically a mini version of a Nordic track grooming machine.

It didn’t take long to realize that I was perhaps the only racer — at least in the 15-mile event — who went into it with guns blazing. Everyone else was strikingly relaxed and patient. When one rider came upon me as I was fumbling up a steep hill, I hurriedly stepped off the trail, yanking my bike into a drift saying, “Go ahead and pass.” To which the rider replied, “Oh you’re fine. I’m okay.” At one point I pulled over to wipe the snot off my face and a pair of men stopped to make sure I was okay. Another eagerly asked, “Is this Hugs and Bacon?”

This was wishful thinking on his part. Hugs and Bacon is the aid station about three miles from the Polar Roll’s finish, manned by a group of local bikers, most with long, thick beards and a predilection for heavy metal. They hang out all day cooking bacon on charcoal fires and handing out other forms of nourishment like cheese, homemade coffee cake, Fireball, and hugs (upon request), all to a blaring soundtrack of Judas Priest. The stop was the perfect fuel up, both physically and emotionally, for the homestretch push.

By this time, my competitive anxiety had mellowed into a full body buzz. I developed a pleasant sense of camaraderie and warmth toward my fellow competitors and the course marshals who rang cowbells in the cold all day while directing everyone safely to the finish line. Here, 906 Adventure founder Todd Poquette himself rewarded each person who crossed with a custom-made sugar cookie featuring the Polar Roll emblem. Finishers rolled in all day — like, the entire day — until Poquette and a couple of others swept the course in the dark of night. The fastest 15-mile cyclist clocked in at record speed before many people would normally eat breakfast while the slowest participants in the 30-miler tallied around 11 hours of trail time.

“Our goal through our youth programs and also these adult events is to help ensure adventure meets people where they are,” Poquette says. “This race isn’t for elite people only.” He shares a story that set the stage for this ethos during the Polar Roll’s inaugural 2015 event. “I met this young woman on the course when I was out on a snowmobile at about 2 in the afternoon — nearing the cutoff. She was begging me to let her finish. She had the worst part of the course, about 14 miles, yet to go. She would finish when no crowd would be there and nobody was going to care, but she had to do it for herself. That creates the culture. We don’t leave the finish line until the last person comes home.”

Celebrating the ride and good vibes 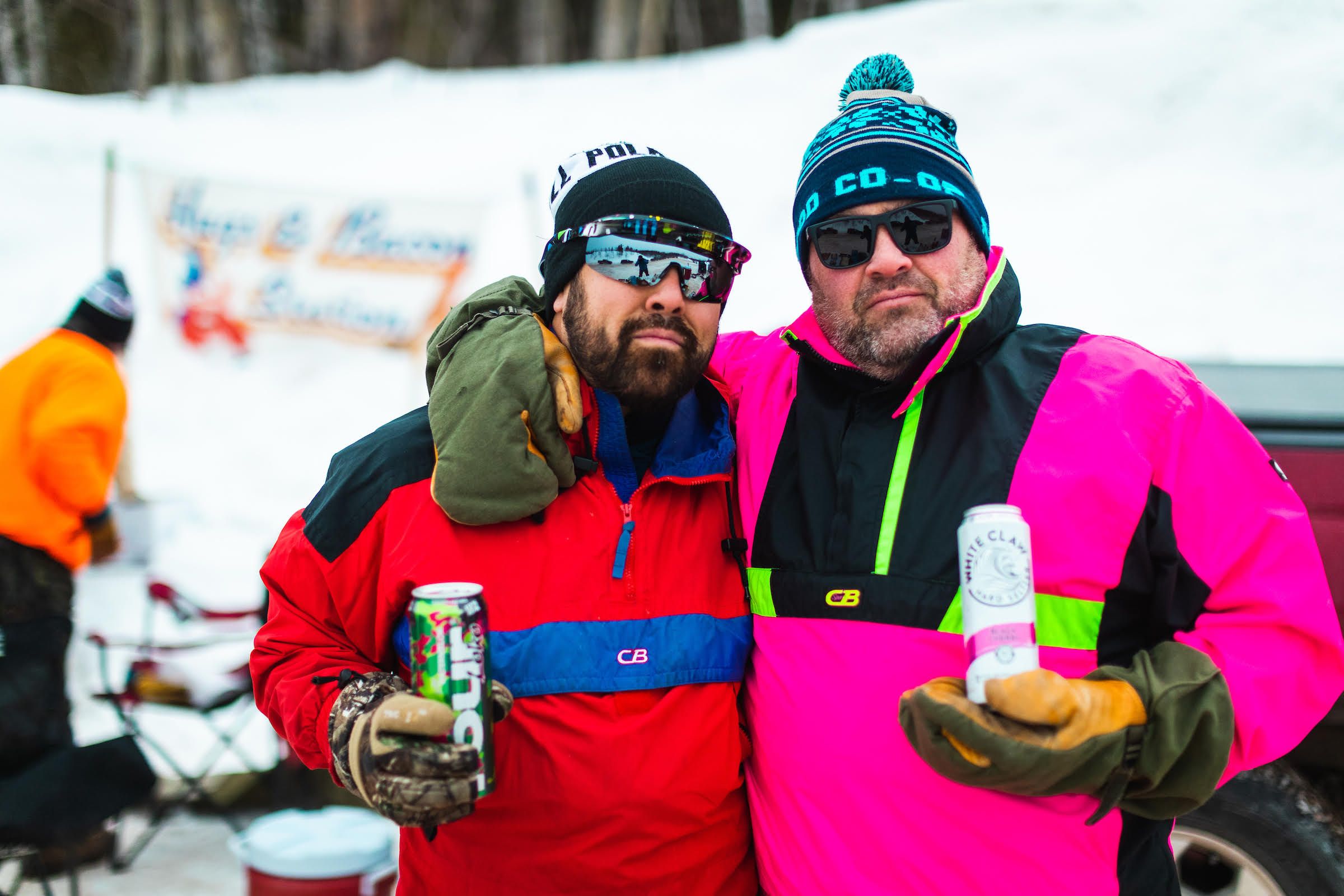 After the race concluded it came time to check out Marquette’s other surprises, beginning with the after party. Marquette’s historic downtown is adorable and welcoming, with boutique shops selling locally made jewelry and crafts, many of its storefronts sporting toy dog sleds and antique Nordic skis. The Polar Roll’s after party took place at Barrel and Beam, a brewery specializing in self-described “wild ales” in a large chic barn outside of town, that was for decades occupied by a historic supper club. Additional local suds were found at Ore Dock Brewing Company, named after the massive steel structure towering out of Lake Superior about two blocks away that for decades processed one of the region’s most important minerals – iron ore. We eventually moved to Blackrocks Brewery, a two-floor converted residential house with a wall-sized TV screen broadcasting sports. 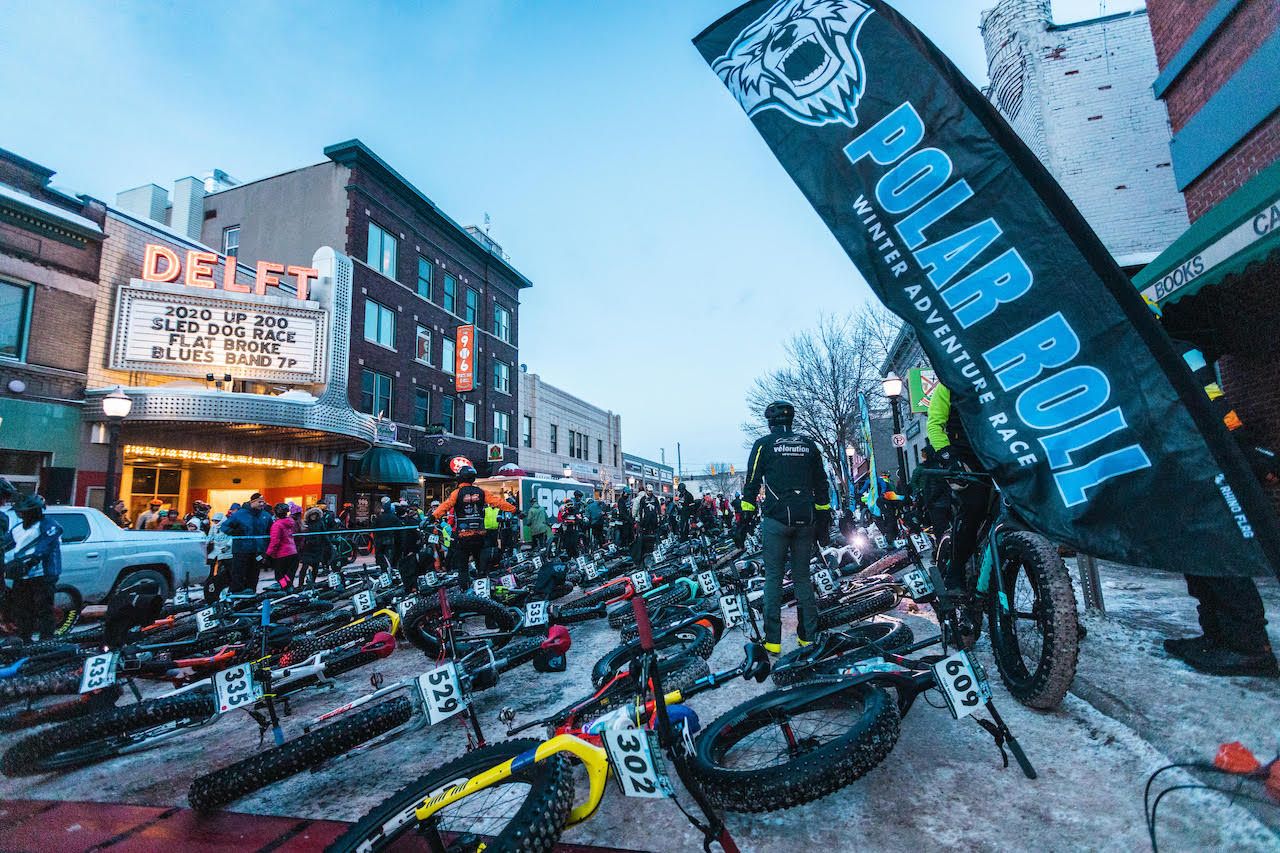 One of the longest continually operating candy stores in the country, Donckers not only sells a rainbow of sweet and savory delights but also houses a soda fountain and diner (its veggie and basil-filled omelettes hit the spot for breakfast). Café Bodega serves fresh, heaping sandwiches on homemade bread and arguably the best fish tacos in the Midwest made with Lake Superior whitefish. The Delft, which functions as the main street centerpiece with its large marquee, still operates as a cinema and serves creative cocktails and tapas made from ever-changing seasonal ingredients.

The shockingly warm vibe in this cold place confirmed what I’d heard from my fellow racer on the flight in. Should anyone ask why I’d visit Marquette, I will share this story — and add that I plan to return as soon as possible.