In the fall of 2019, I found myself desperate to escape the chaos of city life and the near-constant chirping of sirens and crashes and bangs of construction workers. I needed quiet, less concrete, and more ocean. With a visit from two out-of-town friends imminent, we decided to eschew the usual romp around New York City and instead drive to Cape Cod and then take the ferry to Martha’s Vineyard. One of my friends had seen pictures of colorful houses in town called Oak Bluffs. Placated and a little awestruck by views of endless blue ocean ways and magnificent coastline views, we would have agreed to anything, so off we went, not really knowing what to expect.

Arriving in Oak Bluffs felt like stepping into a fairy tale. The 26-square-mile town consists mostly of Victorian-era homes that look like gingerbread houses painted in psychedelic colors — bubble gum pink, aquamarine, lavender, mint, and lime green. Intricate latticework decorates the quaint wrap-around porches and the eaves of the roofs.

Oak Bluffs is mostly abandoned in the off-season like the rest of Martha’s Vineyard. In the stillness, we approached the center of town, where an iron, open-air tabernacle stands. Though most of the houses were empty, others showed evidence of a year-round presence — a screen door propped open, a bike leaning against the porch. A sign hinted at the name of this ghost town of dollhouses: “The Martha’s Vineyard Camp Meeting Association.” We circled the grounds a couple more times, but without a tent in sight and the museum closed for the season, we left Oak Bluffs without knowing more about what those jolly little houses have to do with camping.

Later, I learned that although Oak Bluffs looks more like a modern Hansel and Gretel remake than a Martha’s Vineyard summer retreat, the origins of Oak Bluffs are rooted in a 19th-century religious movement called “camp meetings.” 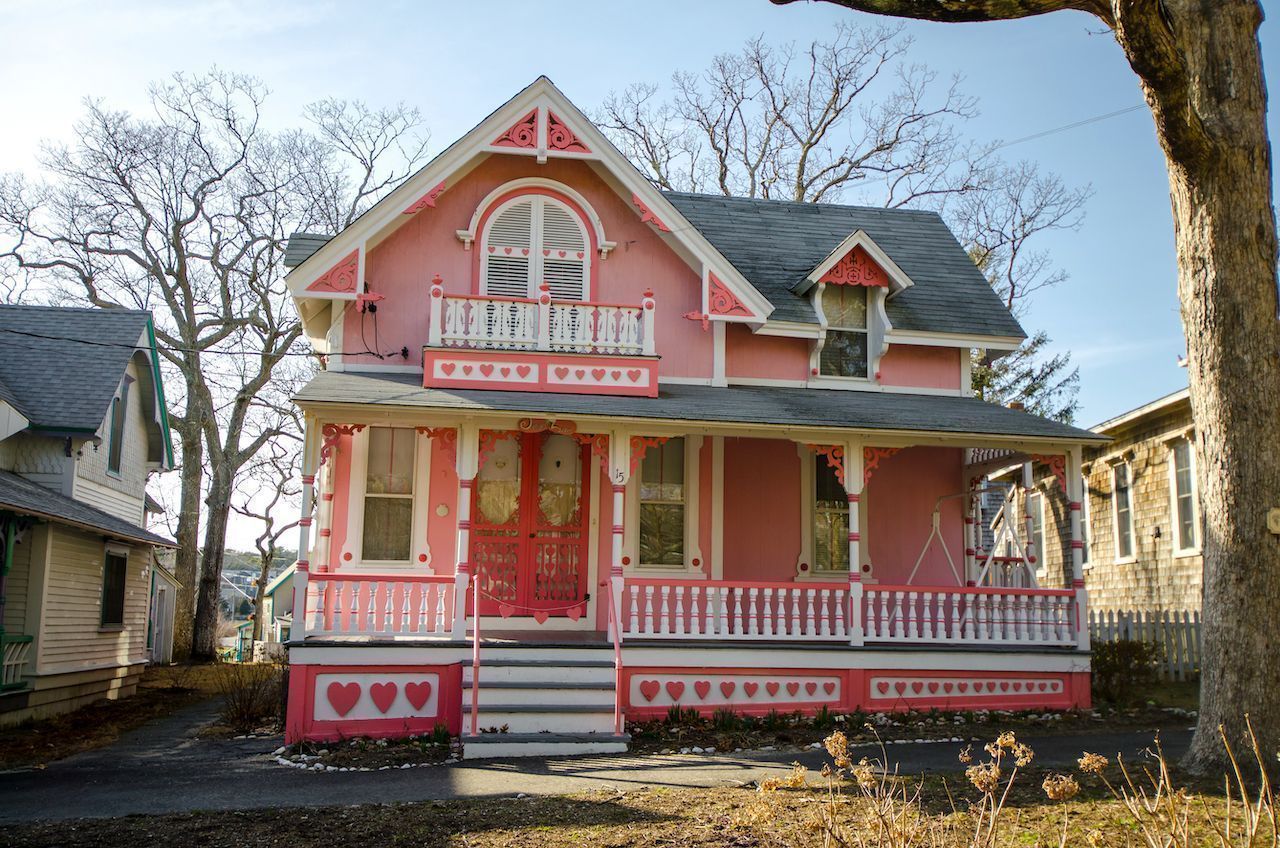 These religious gatherings sprung up in the 1800s. At the time, nomadic settlers followed traveling preachers to outdoor sites (typically a campground) to worship. There, they would camp, sing hymns, and pray before returning home. Camp meetings were especially popular among Methodists and Presbyterians but these gatherings attracted curious visitors of every denomination looking for a respite from the drudgery and isolation of frontier life.

In 1835, Jeremiah Pease, a member of the Edgartown Methodist Episcopal Church, decided he wanted to start his own camp meeting. He and six of his fellow parishioners leased a half-acre of land called Wesleyan Grove in present-day Oak Bluffs, built a pulpit, and set up nine tents for attendees. The congregation held the first camp meeting on August 24, 1835, and it turned out to be hugely popular. By 1855, worshippers had set up 200 tents to participate in the camp meetings. From there, the history of the Martha’s Vineyard Camp Meeting Association gets a little more complicated.

To understand how this religious community took root in Martha’s Vineyard, I spoke with Nancy Blank, a tour guide at the Camp Association’s Cottage Museum. Blank’s family has been living in Oak Bluffs for at least 100 years. Her grandfather married into a family that owned a cottage in the neighborhood. He held onto the house, #13 Clinton Avenue, and around 1940 bought a neighboring cottage, #9, for $500 as a wedding gift for Blank’s mother and father. When he passed away, Blank and her sister moved into the cottages, and today Blank’s daughter lives in one with her husband and three children.

Blank explains that the first camp meetings lasted for around seven to 10 days in the summer. Soon, however, families arrived with their tents a week early and stayed after the camp meetings ended. The tents were arranged in concentric circles so people could be near each other for prayer, bible study, and communal suppers — and, Blank adds, so that the ministers could be sure their flock behaved once the camp meetings ended. In 1859, the first cottages, built from tent frames, popped up on the campground. The outbreak of the Civil War made canvas hard to come by, making the wood cottages even more popular. The cottages, built in the distinct Victorian, gingerbread style you can still see today, also allowed camp meeting worshippers to extend their stay through the summer. In 1860, the grounds were officially recognized as the Martha’s Vineyard Camp Meeting Association. Eight years later, the MVCMA was officially incorporated into the Commonwealth of Massachusetts. 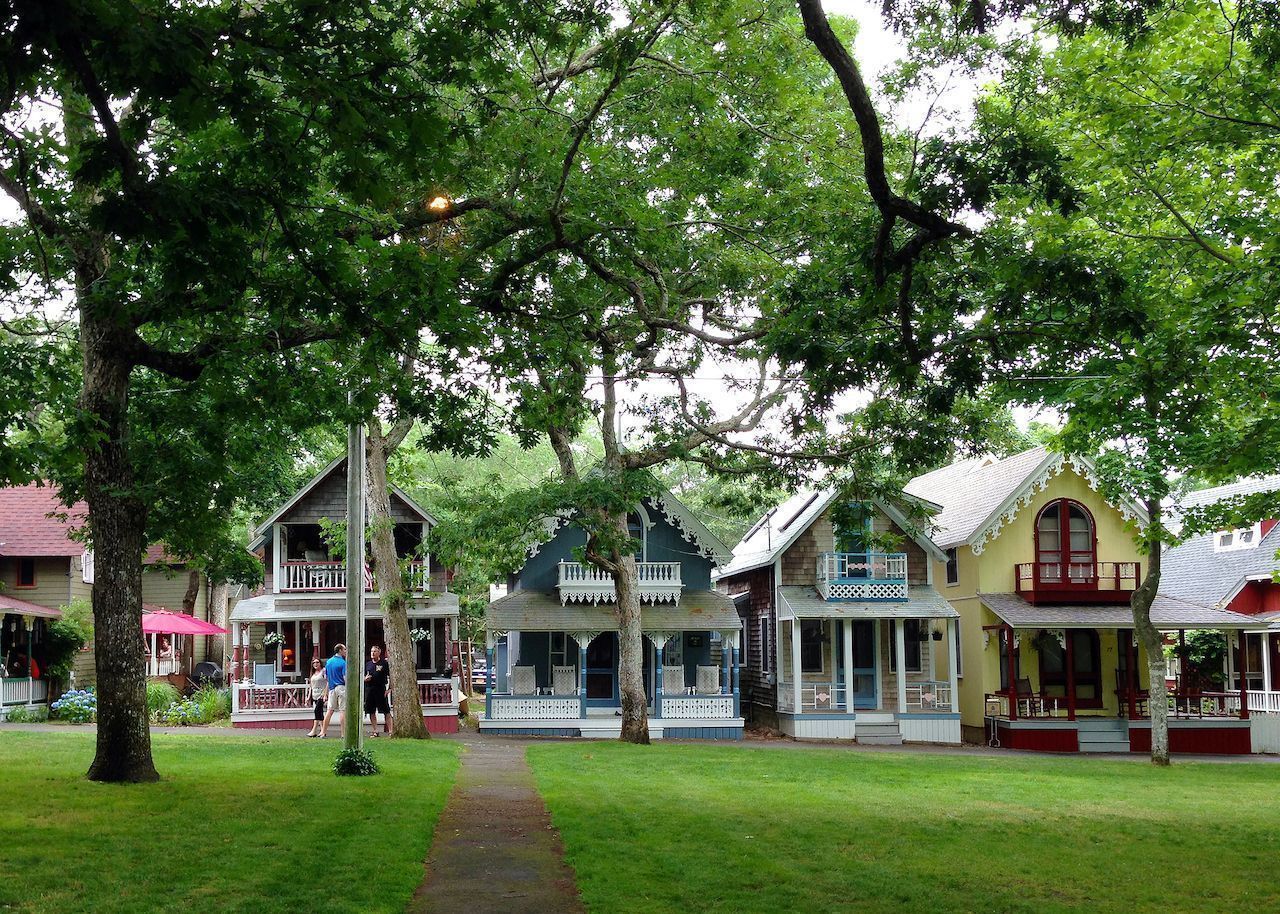 Oak Bluffs expanded alongside the MVCMA. Two years after the Civil War ended, the Oak Bluffs Land and Wharf Company became dead set on turning Martha’s Vineyard into a lucrative summer resort destination — much to the chagrin of the campground residents. According to Blank, the Camp Meeting Association erected fences around the cottages to ward off drunks and vacationers who didn’t appreciate the religious nature of their summer homes. For residents of the MVCMA, Oak Bluffs was not a resort town, it was strictly a place of worship. In 1879, they solidified this with a permanent wrought-iron tabernacle that replaced the 4,000-seat canvas one built nine years earlier.

The Martha’s Vineyard Camp Meeting Association continued to develop into a miniature city. Residents gave its mini-neighborhoods their own names too — Cottage Park, Trinity Circle, and Victoria Park among them. By 1880, when the campground adopted the name Cottage City, there were 500 cottages on the property (in 1907 the name of the town changed to Oak Bluffs).

The narrow pathways between homes were granted names like Clinton Avenue, where Blank and her family lived, also known as Ministers Row. They started having a little fun, too.

“The ministers got so involved in games of croquet that they would sometimes forget to go to prayer meetings,” she says.

By the end of the century, the camp meetings took on the structure they have now: A series of religious services that runs from July 1 to August 31. Today, a different minister leads services each Sunday. Methodist, Unitarian, Protestant, African Methodist Episcopal Church, and Catholic ministers are all scheduled to appear in 2020.

Most people who attend camp meetings these days are from out of town — ministers from different churches around the country often draw their flock and Blank jokes that “people fight to preach here.” It’s the tourists eager to catch a glimpse of the gingerbread houses that really take over the MVCMA in the summer, though.

“On any given day during the summer at least four or five tour buses come [to the museum],” Blank says. “At the height of the bus season, I’ll give tours to eight busloads of people.”

Of the 500 original MVCMA cottages, only 315 survive today. And they weren’t always painted in rainbow colors. In the early 1950s, when Blank was still a little girl living in her parent’s cottage, an artist arrived at the camp. She bought a cottage — and decided she wanted to paint it pink. 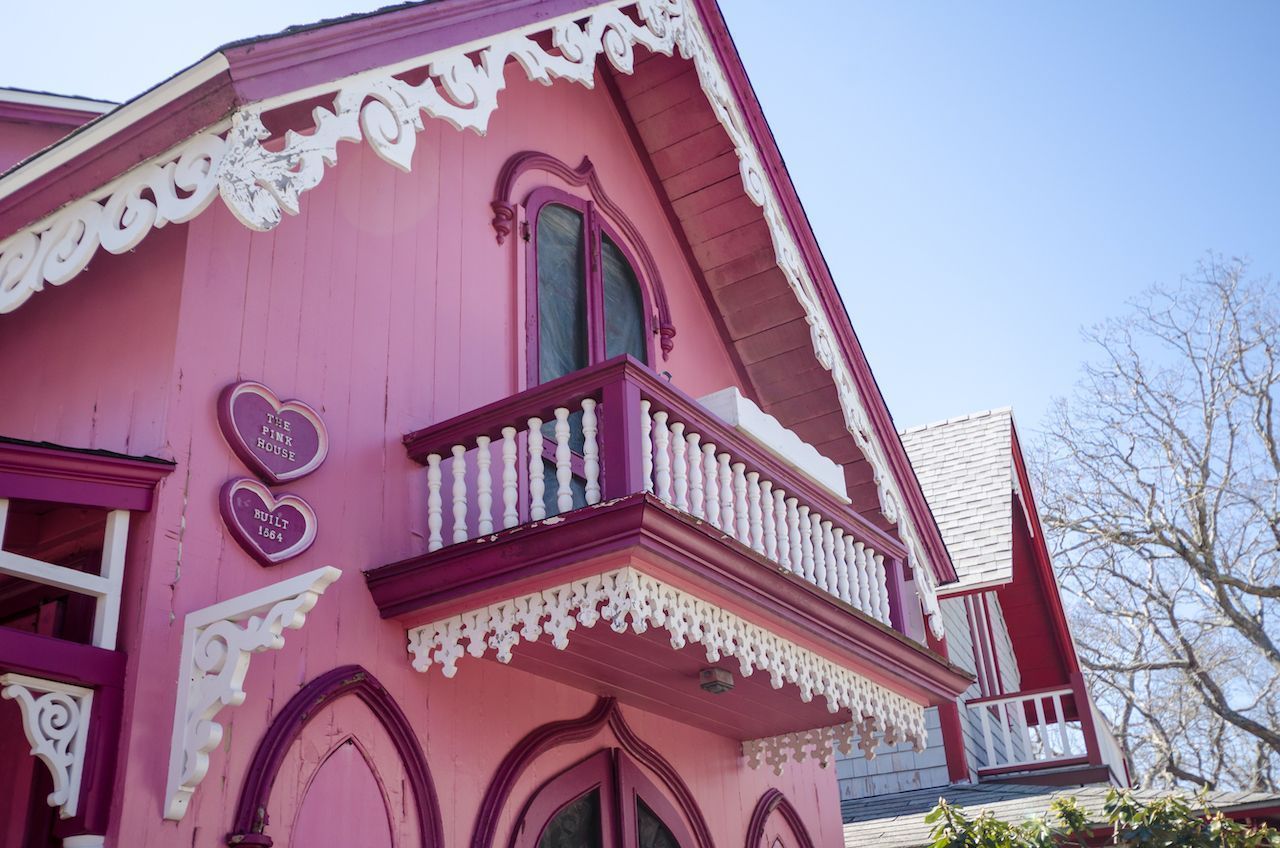 “We all gagged and called it the Pepto Bismol house,” recalls Blank.

But the pink house attracted visitors and kicked off a trend. More residents started painting their houses and tourists started flocking in. Today, “You’d be massacred by half the people in the campground if you asked them to go back to original colors,” she says.

Around 100 of the cottages are occupied all year round. The vast majority of the permanent residents come from a religious background and live in cottages passed down through their families for generations. The current residents of the MVCMA are interconnected through deep bonds of friendship that span many generations, as much as religion. Blank recalls that her father, who visited the campground every summer, once brought his roommate, Anthony, with him one year. Anthony fell in love with her father’s close camp friend Eleanor, and the pair moved into the cottage her family owned, where their descendants still live today. Proximity tightens those bonds.

“People who live there can’t have the slightest qualm living cheek to jowl with their neighbors,” says Blank, noting that the dining room of her friend Peggy — who she has known essentially since birth — butts up against the bathroom of a neighbor. But the upside is that this community has survived and thrived through love and fellowship for 185 years.

“A couple summers ago I was sitting in the museum watching my grandkids,” she says. “We had a baby pool and there were 30 kids all playing in this little wading pool. They were all children of the camp meeting. That is what it’s all about.”

The best day trips from Boston worth getting out of town for
Tagged
Art + Architecture Religion Massachusetts, United States
What did you think of this story?
Meh
Good
Awesome