Chima Burey first came up with the concept of Duke and Dame, a salted caramel flavored whiskey, after a night out with friends in Miami. After dinner, a friend bought a round of fireball shots for the table, and the cinnamon-flavored whiskey shots sparked a conversation among the group about other potential flavors. Burey shared that he’d love to see a whiskey that tasted like Werther’s Original or Sugar Babies candy, but he never thought the conversation would lead to him starting his own brand of whiskey. 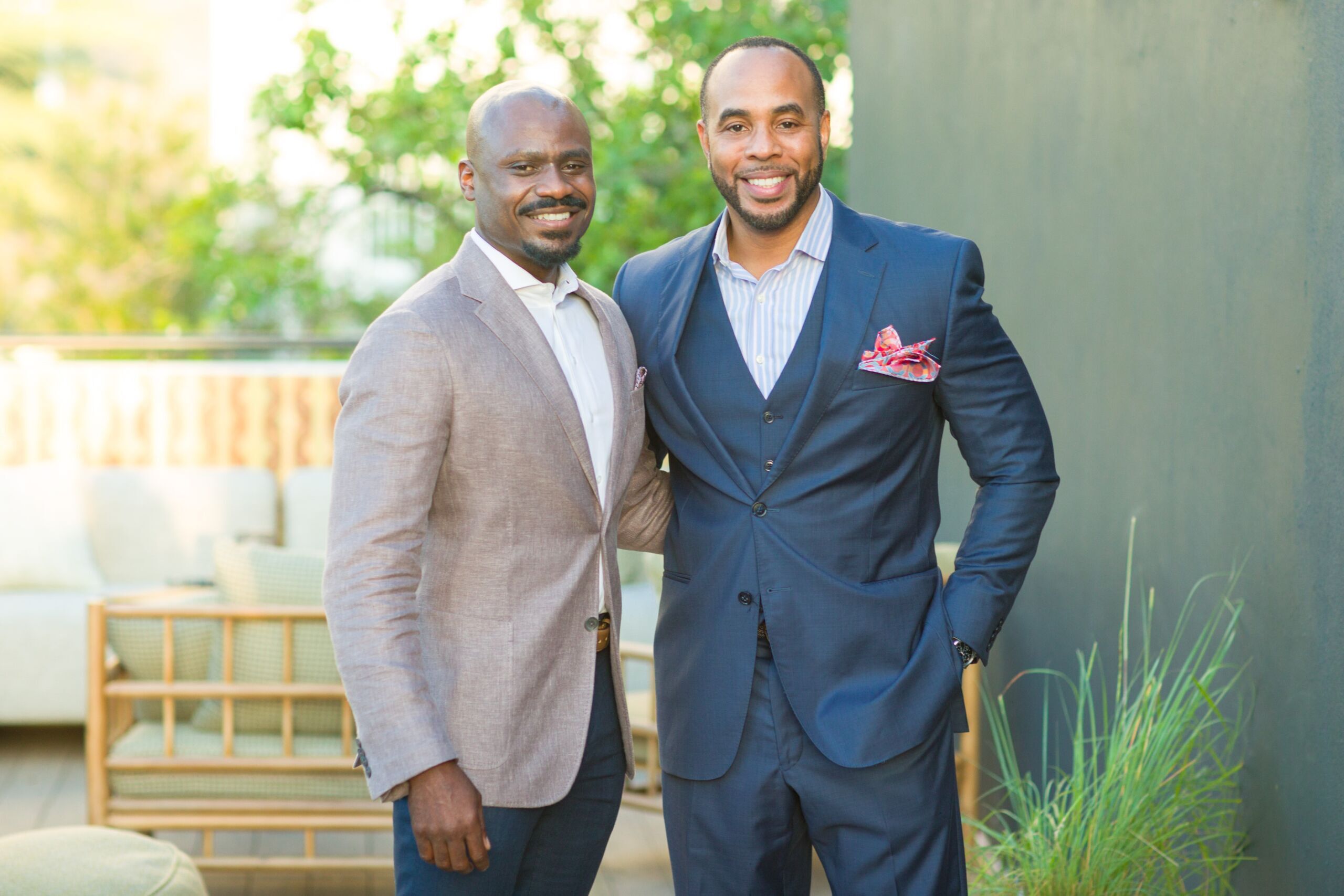 Three years later, Burey and his long-time friend, Amani Macaulay had a much more serious conversation about their next career steps. Both Burey and Macaulay were in finance at the time and were looking for more fulfilling jobs. Burey brought up his idea of the salted caramel flavored whiskey and after some contemplation, the two decided to go for it.

“Suddenly our kitchens became a chemistry lab, and we were calling each other with different recipes, having our friends and family sample different mixes, and we finally came up with something that we loved,” Burey told Matador Network.

After they found a distillery partner in Florida, the next step was naming the whiskey. Macaulay says that the name they ultimately chose, Duke and Dame, came from the reactions of those who tasted the whiskey for the first time. 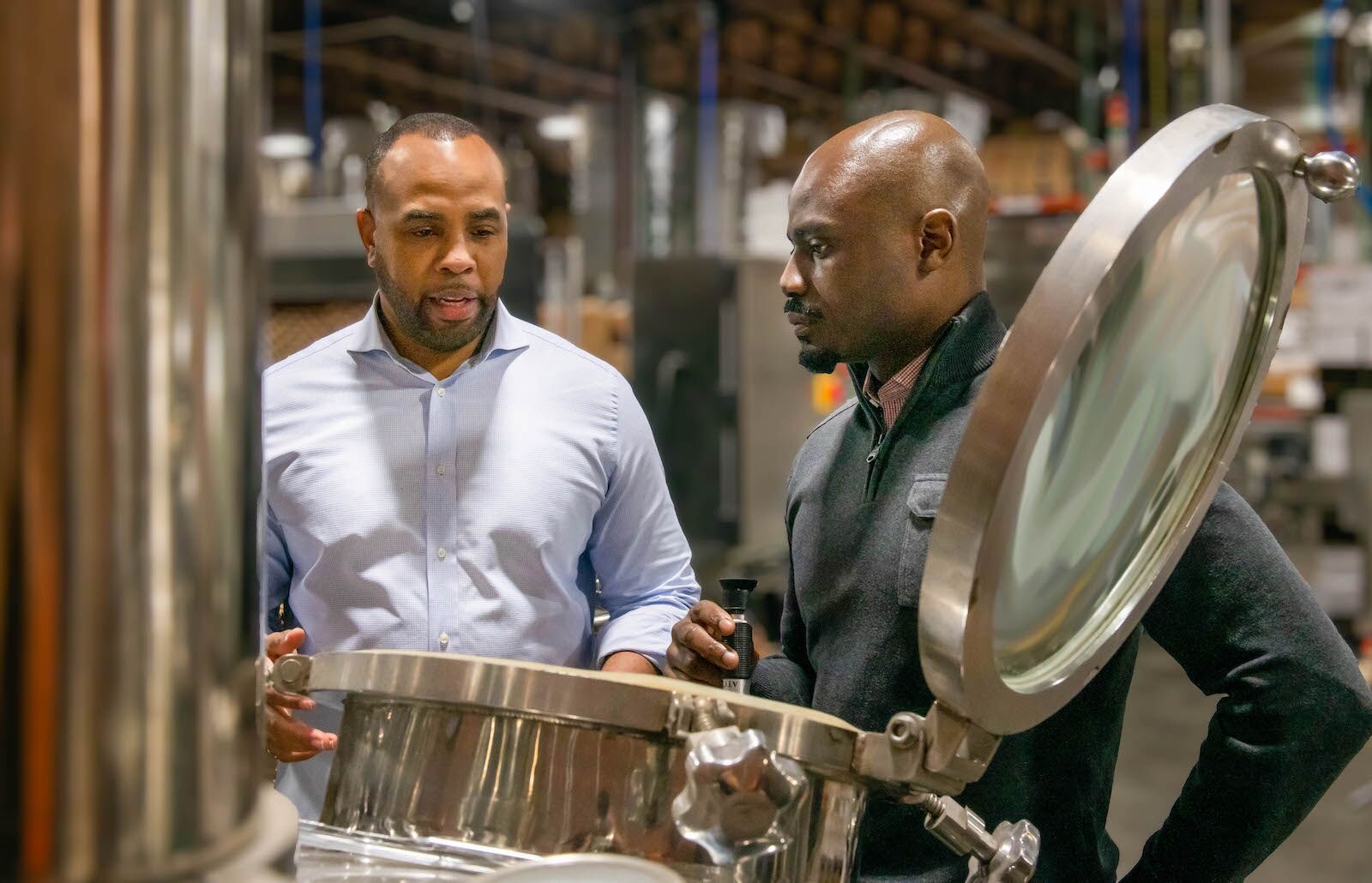 “Everyone’s eyes lit up when they tasted it. It was contrary to when people take a shot of tequila and they cringe. People said they felt royal and regal when they tasted it, and we wanted something that represented both men and women,” Macaulay explained. “So we started with “Duke” and then we added “Dame” because we envisioned this power couple enjoying their whiskey together.”

“Hopefully going forward there are a lot more Black-owned spirits companies where we can be a resource for people who are looking to start a spirits brand or wanting to come into the spirits industry,” Macaulay said. “We didn’t have that. We had to learn a lot of things on our own.”

Because the whiskey was conceived in South Florida, Burey and Macauley also represent their hometown city of Miami when they’re on the road. The city is special to them, not just because of the nearly year round perfect great weather, but because of its cultural diversity.

Miami’s food and drinks scene has evolved in recent years, and new restaurants and abrs are popping up on the scene all the time. Burey and Macaulay consider themselves experts when it comes to tracking down the best food and drinks in the Magic City. Here, they share their five picks for Miami’s best bars and restaurants.

Wynwood is known for its colorful murals, but it’s also becoming a haven for people who plan their vacation and nights out around what they’re going to eat, with restaurants like Dukunoo Jamaican Kitchen. The restaurant has live music, an “irie” (a Jamaican term for good or nice) otherwise known as a happy hour, and a DJ hosted brunch on the weekends.

“Dukunoo does amazing Caribbean fusion food, and they’re in the heart of Wynwood,” Macaulay said. “We really like them because it’s one of the few representations of Caribbean food and culture within the growing Wynwood space.”

For over ten years, Yardbird Table and Bar has been a go-to destination in Miami for Southern comfort food.

“Yardbird is very popular on South Beach, and they’re known for having one of the best fried chicken dishes in South Florida,” Macaulay said.

Both locals and visitors flock here for hearty dishes like lobster mac and cheese and the St. Louis ribs. Another highlight? The great selection of local craft beers.

Miami’s Overtown used to be the meeting place of iconic Black entertainers like Duke Ellington, Ella Fitzgerald, and Aretha Franklin, and the city is now home to another kind of superstar:  Red Rooster, a soul food restaurant owned by celebrity chef Marcus Samuelsson.

“Red Rooster is one of our favorite restaurants, and we sponsor a Caribbean night on Sunday nights,” Burey said. “Our partnership works great because we both want to show that Miami is not just a party city, but there’s a rich culture here.”

Some of the best dishes at Red Rooster are the cornbread, fried green tomatoes, and shrimp and grits. The restaurant also has a pool hall on the second floor with live music on special nights.

Miami Heat superstars Dwyane Wade and Udonis Haslem are co-owners of this Aventura restaurant that serves up wood-fired pizza, chicken wings, and seafood dishes. Both Wade and Haslem have specialty items on the menu: Wade’s dry-aged beef “All American” burger and Haslem’s fried chicken sandwich are worth making the trip to 800 Degrees Woodfired Kitchen.

Burey said, “The food here is incredible, and the number one selling dessert is the tres leches bread pudding made with Duke and Dame whiskey.”

Located inside a thrift stop, downtown Brickell’s Better Days bar is open seven days a week from 5 p.m to 5 a.m., and the bar caters to the after-work crowd as well as the late-night revelers.

“Better Days is one of the most popular bars in Brickell,” Macaulay said. “This is where all of the industry bartenders come and party and drink. It has great cocktails, a great environment, and a fun location.”

The bar’s arcade games, mismatched furniture, and kitschy decor make it feel like you’re hanging out in a friend’s basement.