No matter where you are in Michigan, you’re never far from America at its grandest. This should come as no surprise — the state is crisscrossed by rivers, contains millions of acres of forest (over 50% of Michigan is forested), borders four Great Lakes, and has the longest freshwater coastline in the nation. 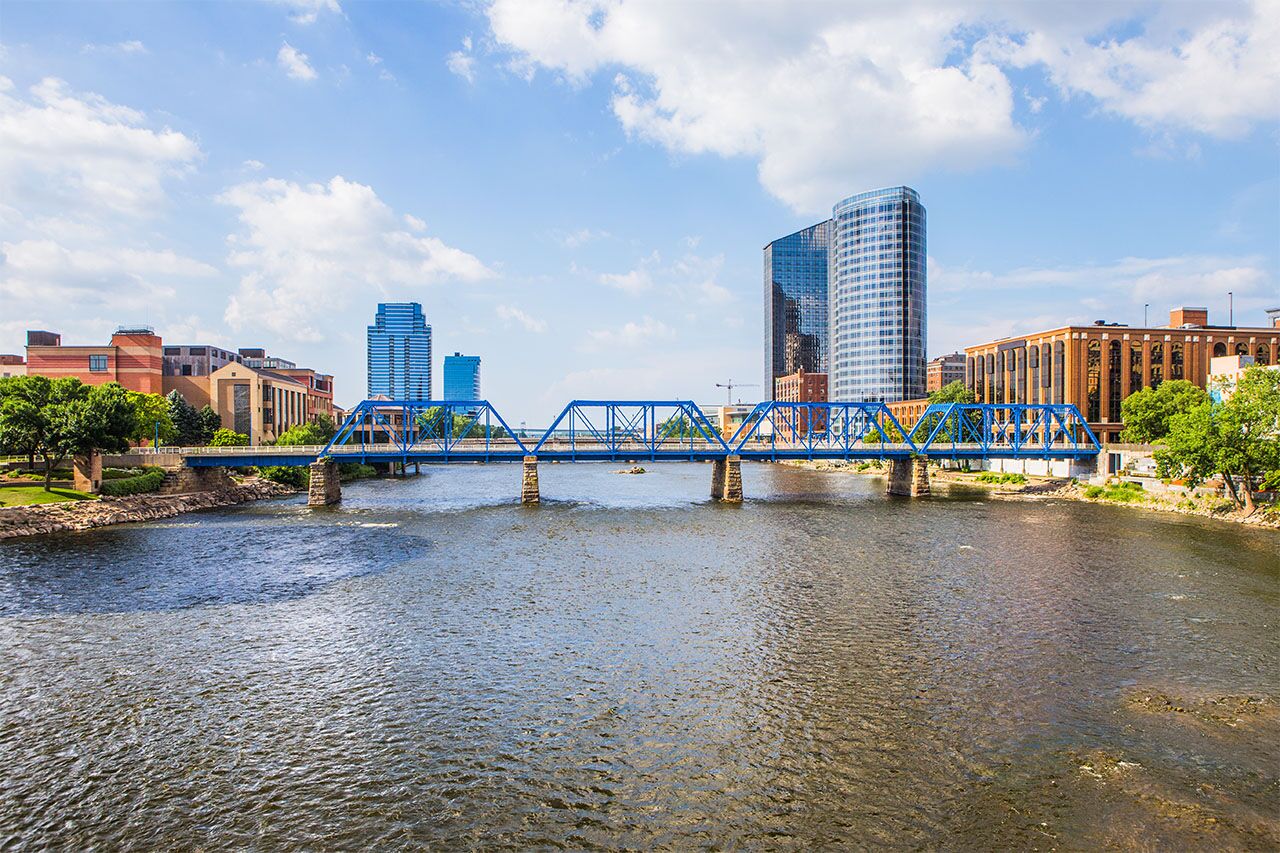 A river runs through it

The Grand River — the longest in Michigan — courses through downtown Grand Rapids, and the 2.5-mile Riverwalk takes you to some of the city’s most scenic sites, including vibrant murals and historic bridges. Travelers with kids should make a pit stop at Fish Ladder Park, an aesthetically striking structure designed to assist migrating salmon on their upstream journey.

If you prefer two-wheeled travel, Grand Rapids is where it’s at, equipped with an extensive network of paved pathways and dedicated bike lanes. Bonus: Every bus has a bike rack. The 15-mile paved Kent Trails system can be accessed just 1.5 miles from downtown and runs through the 1,400-acre Millennium Park, one of the largest urban parks in the country with 18 miles of its own trails.

For something faster paced, know that Outside Magazine named Grand Rapids the “Best Town for Mountain Biking” in 2010. Grab your bike and helmet and hit the mountain biking trails in the area. Those in Wahlfield Park and Luton Park are some of the best known, but the West Michigan Mountain Biking Alliance has developed over 100 miles of off-road trails for all skill levels throughout the region.

Those looking for more of a beach-bum experience are also in luck. Millennium Park features a sizeable lakefront beach with canoeing, kayaking, and stand-up paddleboarding rentals available, as well as boat launches for BYOB(oat). Several stunning stretches of sugar sand on Lake Michigan await nearby, too: Oval Beach, Grand Haven State Park, and Saugatuck Dunes State Park are each a 45-minute drive. 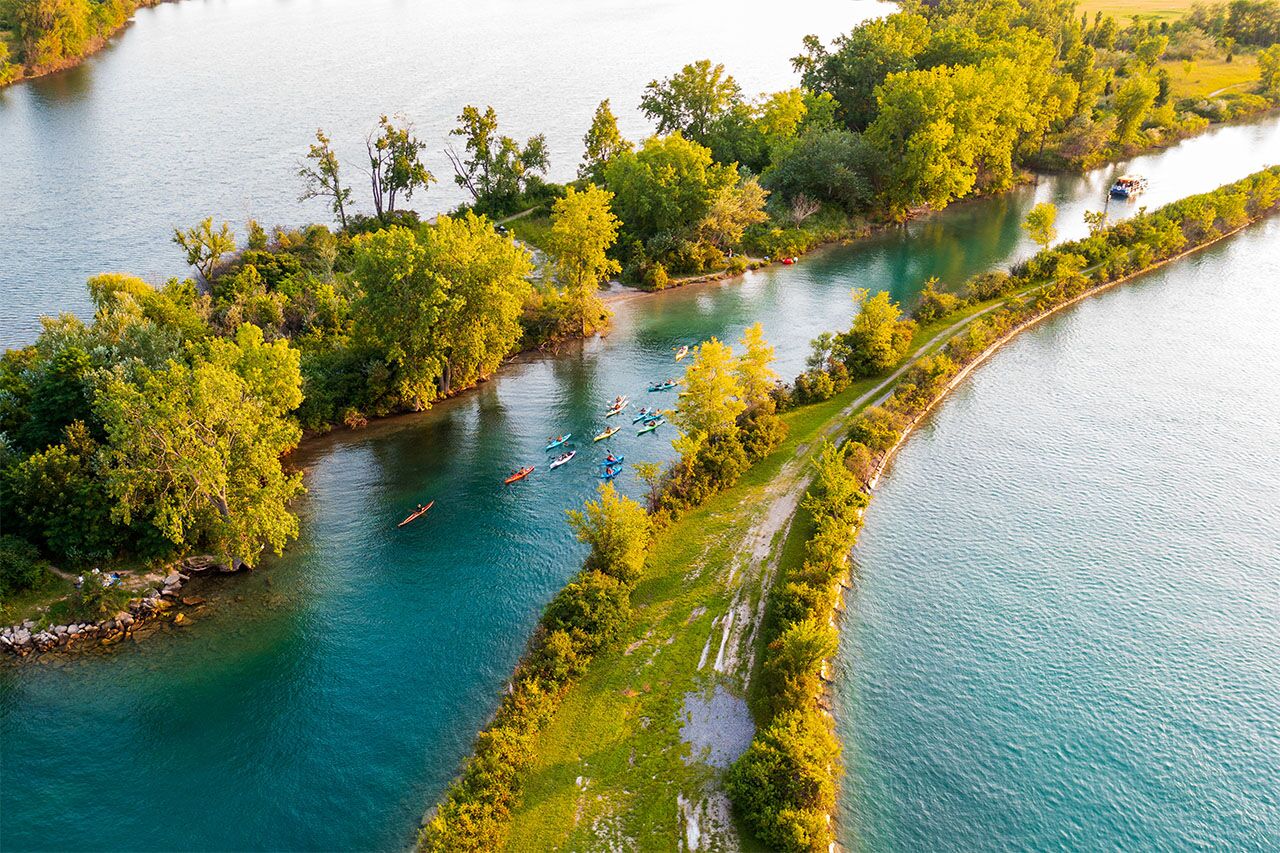 Detroit is an expansive city — it covers 139 square miles, to be precise — and all that space makes plenty of room for parks, greenspaces, and a growing network of greenways. that’s about half the size of NYC with less than a tenth of the population — Detroit is home to a staggering number of parks and green spaces, including a growing network of greenways. The city’s also built along the Detroit River and Lake St. Clair, offering visitors incredible opportunity for outdoor recreation without leaving town.

A river runs alongside it

The heart of downtown Detroit is just steps from the Detroit River, and exploring the 3.5-mile RiverWalk makes for a perfect daytime activity. Rent a bike from Wheelhouse Detroit or MoGo Detroit, Metro Detroit’s nonprofit bikeshare organization. Ride along the riverfront to check out Hart Plaza, William G. Milliken State Park, Gabriel Richard Park, and all the way to Belle Isle, a picturesque river island that, thanks to a quirk of geography, sits just to the north of the border with Canada. This is the place to be if you’re into big ships — many large freighters traverse the Detroit River on their journey through the Great Lakes.

Alternatively, get out on the river itself with guided kayak tours by Detroit River Sports or Riverside Kayak — the historic canal tours are a true highlight.

With roughly 300 city parks, Detroit has abundant green space, but the crown jewel must be Belle Isle. A popular place for summer picnics and barbecues, Belle Isle is also beloved by runners and cyclists. Don’t miss the Anna Scripps Whitcomb Conservatory with its five distinct climate displays, all centered on an iconic building designed by famed Detroit architect Albert Kahn. 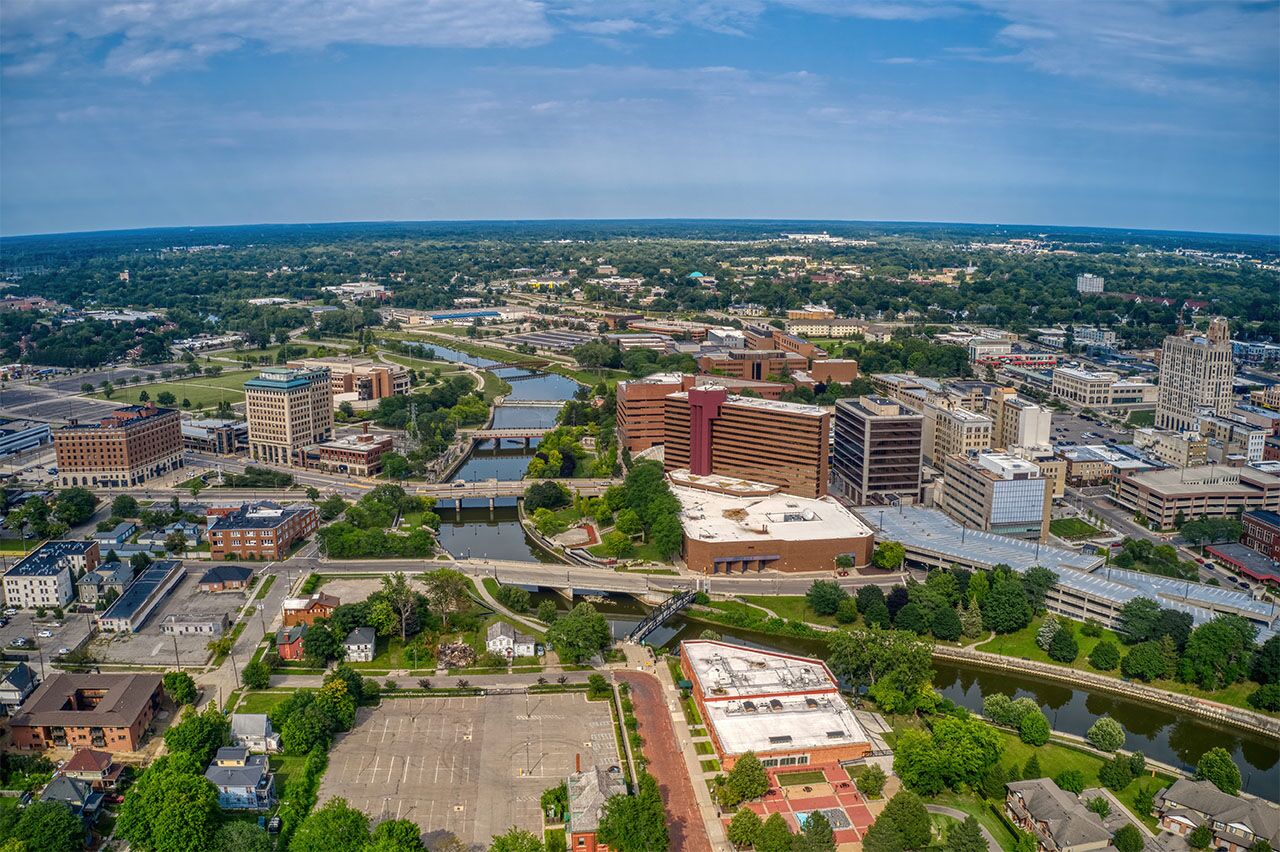 Don’t let the nickname “Vehicle City” fool you — with the Flint River curving through downtown and numerous outdoor recreation areas within easy reach, Flint proves it’s a whole lot more than just the birthplace of Buick and GM.

A river runs through it

At 73 miles long with 24 access sites, the Flint River Water Trail provides plenty of chances for adventure. Kayak Flint offers rentals as well as guided tours if you’re hoping to be waterbound.

Flanking the Flint River, Riverbank Park features five separate interconnected concrete “blocks” that step down to the water’s edge, with canals, fountains, waterfalls, and an amphitheater to enjoy. The park is also home to the annual Flint Jazz Festival in the summer.

At the mouth of the Flint River, Mott Lake’s Bluebell Beach makes for an ideal place to catch some sun, play in the sand, and go for a swim. The park’s paved bike path connects to the 27-mile network of the Flint River Trail, which also loops around to the other side of the lake where you’ll find Stepping Stone Falls, an accessible dam featuring dramatic concrete waterfalls illuminated by multicolored lights at night.

The Flint River Trail is part of Michigan’s nearly completed 2,000-mile Iron Belle Trail, the longest designated state trail in the country. It will ultimately connect Belle Isle Park in Detroit to Ironwood, near the western tip of the Upper Peninsula. 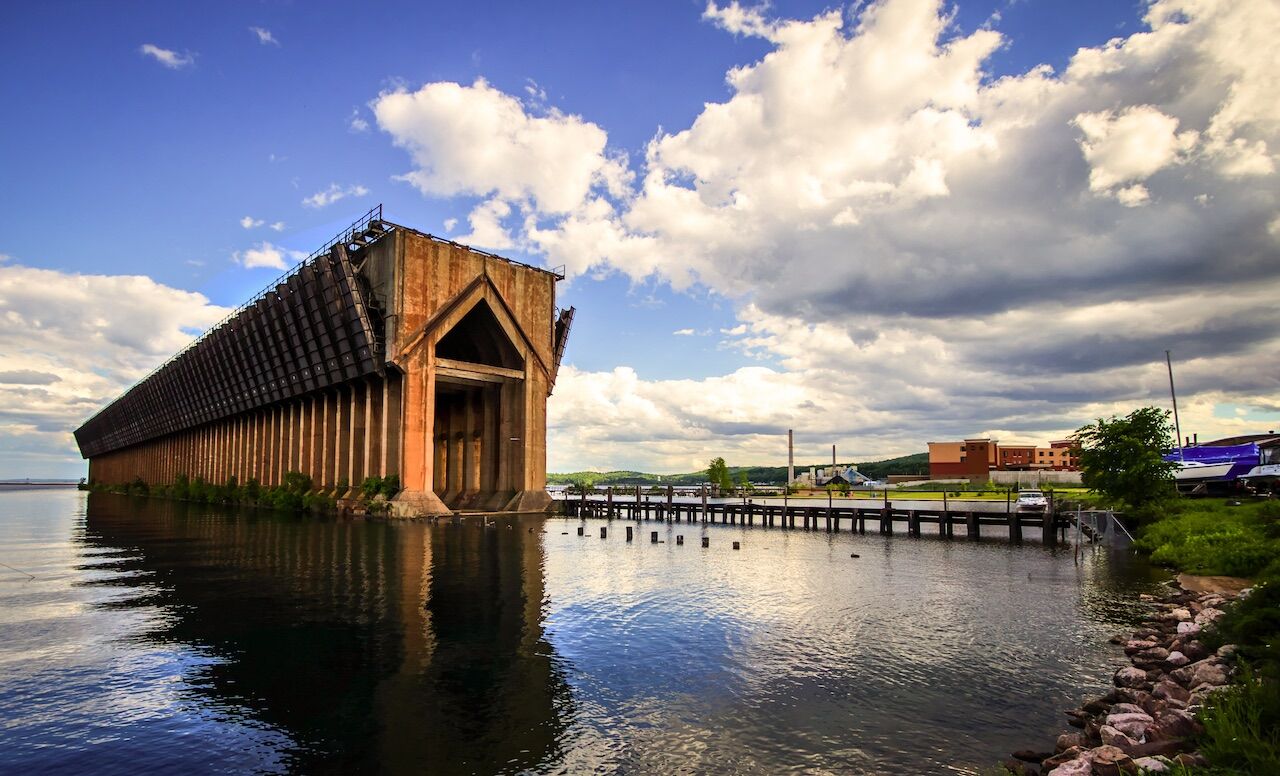 Though the population is under 21,000, Marquette is the largest city in the Upper Peninsula — which should give you some indication of just how vast the wilderness is up here.

Hardcore hikers take note: Marquette is a North Country Trail Association Trail Town. Spanning 4,600 miles through seven states, the NCT is the longest hiking path in the National Trails System (more than double the AT!). You can access several segments from Marquette, including the Iron Ore Heritage Trail and the Noquemanon Trail Network.

Beyond the NCT, the hike to Sugarloaf Mountain will take you past century-old forests for a stunning view of Lake Superior. If you want more of a challenge, opt for the trek to Hogback Mountain, which is steeper, rugged, and truly remote.

Mountain bikers enjoy zooming along the trails in Marquette, such as the Noquemanon Trail Network’s North and South Trails. Together, they hold over 75 miles of non-motorized singletrack.

The most superior lake

Locals and visitors alike adore Presque Isle Park’s miles of trails, including one to Black Rocks, an ancient rock formation thought to be about 1.7 billion years old (some of the oldest exposed volcanic rock in the world) that rises 20-30 feet above Lake Superior. Cliff jumping here is a popular activity not for the faint of heart. For slightly warmer water, head to McCarty’s Cove, where you can launch off the sandy beach and swim to several rock islands.

Lesser known and a little farther outside the city, Little Presque Isle is worth the extra effort to reach, what with its sandy beaches, dense forests, wooded dunes, and rugged sandstone cliffs that loom along the shoreline. Auroras glow brightly here — season and weather permitting — due to the almost complete absence of light pollution. 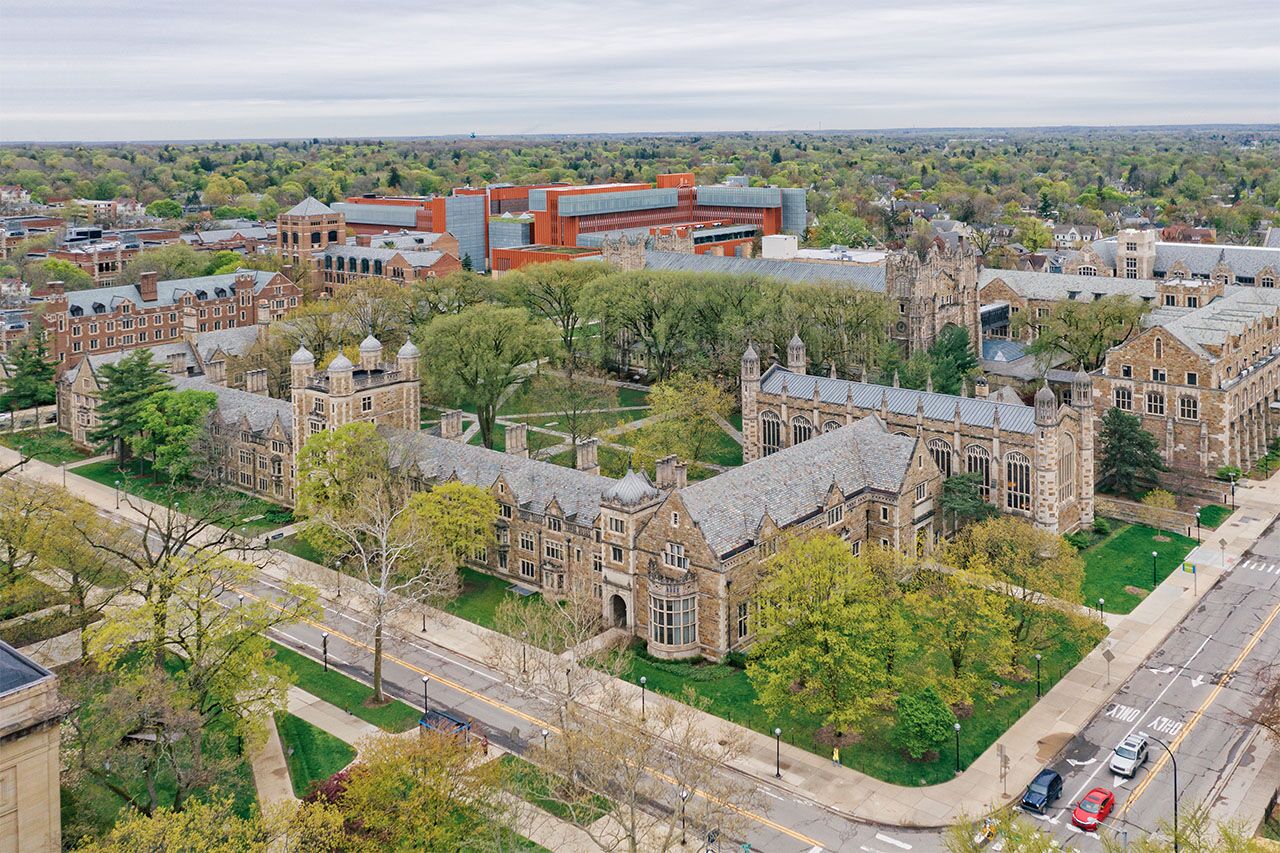 With a nickname like Tree Town, it’s safe to assume that Ann Arbor has plenty of greenery — and it does! Home to more than 1.45 million trees, greater Ann Arbor provides refreshing nature vibes just minutes from the heart of downtown and the University of Michigan campus.

So many parks and trails, so little time — but a fantastic place to start is the Matthaei Botanical Gardens and Nichols Arboretum at the University of Michigan. The gardens feature specimens appropriate to south Michigan, including Great Lakes endemics, and you can get lost (in a good way) via the forested trails that lead to the Huron River at the adjoining Nichols Arboretum.

Meanwhile, the Bird Hills Nature Area makes up the largest natural area in the city, with unpaved trails open only to hikers. Expect to wind through hills and ravines surrounded by a variety of tree and wildflower species.

Take to the water to explore part of the 104-mile-long Huron River Water Trail, which holds experiences from placid flat water to rushing rapids. Rent a canoe or kayak at the Gallup Park Livery or Argo Park Canoe Livery for a fun paddle down the Huron through Gallup Park or down the Argo Cascades.

There are so many spots in Ann Arbor — and Michigan at large — where you’ll be immersed in nature minutes from your doorstep, be it rivers, forests, waterfalls, hike and bike trails, or the coast. What will your next escape be?

This post is proudly produced in partnership with Pure Michigan.
Tagged
Outdoor Michigan, United States
What did you think of this story?
Meh
Good
Awesome