The Middle East is almost never the first region people think of when they hear the word “beer,” but that might be changing as craft breweries find an increasing market among locals and foreigners alike. In a way, it’s a long overdue homecoming for the beloved beverage.

Ironically, it wasn’t in my hometown of Cincinnati that I learned to appreciate beer, even though it’s home to dozens of breweries and one of America’s largest Oktoberfest celebrations. Rather, it was during my time in the Middle East that I first developed a taste for it — a revelation that shocks almost everyone who hears it.

The morning after my last exam as a freshman in college, I boarded a flight to Cairo and spent three months exploring Nile country, immersing myself in the language and eating the molokhia. I was drawn back to the region every summer after that. I lived with a Bedouin family in Jordan to gather linguistic data for my thesis, and I wandered the Old City in Jerusalem when I wasn’t busy memorizing irregular Arabic verbs. But as graduation approached, I still craved more. After a sweltering summer vacation in Upper Egypt and a quick visit to my old host family in Jordan, I found myself once again in Holy City, this time for a full calendar year working on a master’s degree. Once I graduated, I worked in Jordan for a year and a half, trying every type of food and drink available — including beer.

As the burgeoning beer scene in the Levant continues to spread through word of mouth and exports, associating craft beer with the Middle East may no longer be cause for surprise. 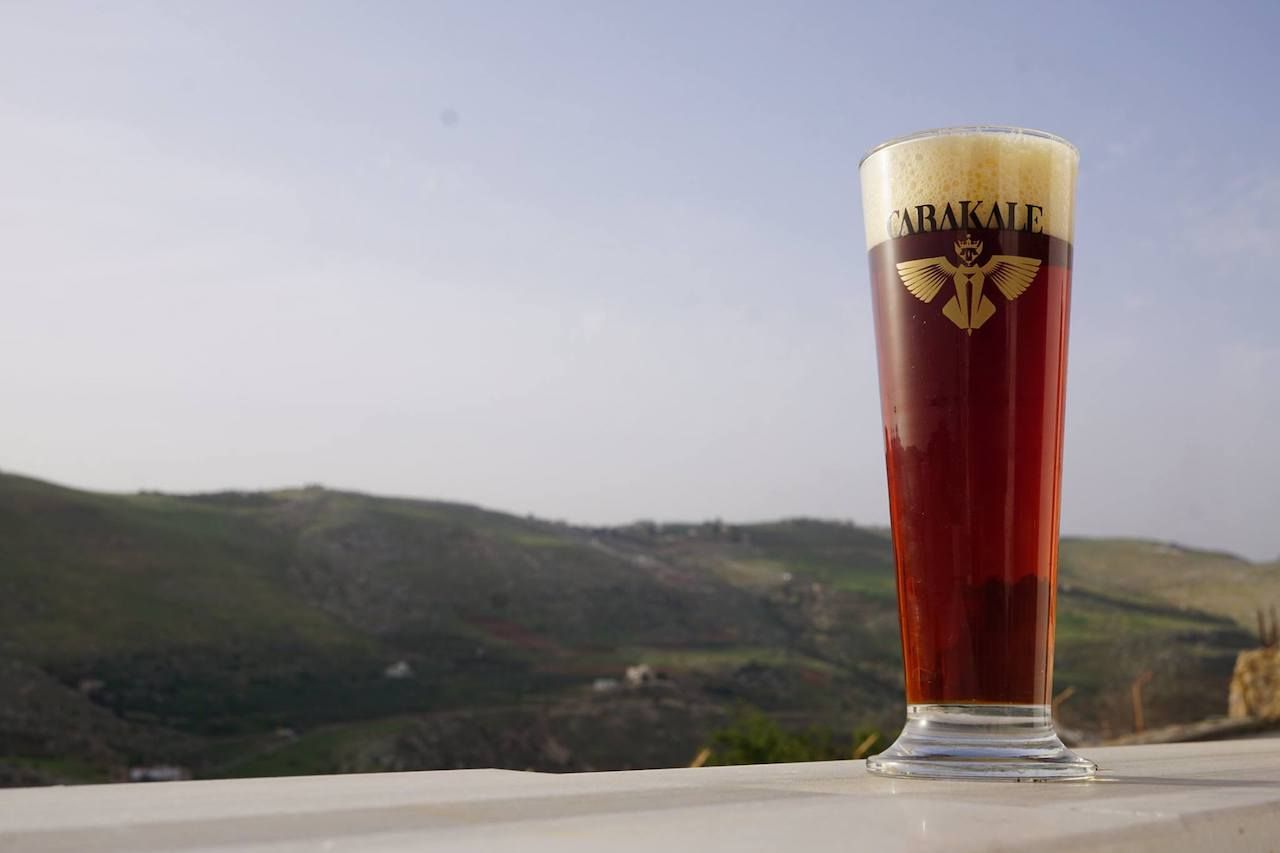 It’s not everyday you get to imbibe history, but in Jordan, the air, land, and beer are saturated with it. Looking out over the village of Fuheis from Carakale’s porch, my gaze was met by mountains covered with patches of stubborn scrub and olive trees that had endured the final month of a hot, dry summer. Everything looked so old and sleepy, almost Biblical, throwing into sharp contrast the novelty of enjoying a craft beer while listening to Autostrad, a popular band from the capital.

Carakale, Jordan’s first true microbrewery, opened in 2013. One of its biggest claims to fame is Dead Sea-rious, a gose made with salt from the Dead Sea. Founder Yazan Karadsheh, an engineer who quit his lucrative job at Halliburton, completed the UC Davis Master Brewers Program, and then worked at a microbrewery in Colorado, has not had an easy go of it. He navigated near-impenetrable bureaucracy, constantly evolving tax laws, and the delicate subject of alcohol production and consumption in a majority Muslim country to open his brewery. Karadsheh and his Carakale team have so far dealt deftly with these issues through a combination of patience, persistence, and tact.

Carakale’s name and logo are inspired by the caracal, a wild feline native to Jordan whose distinguishing characteristic is the exaggerated tufts of black fur extending from the tips of its ears. There’s a possible second meaning to the appellation that locals are more likely to catch. Carakale sounds like a portmanteau of “Karak” and “ale.” Karak is the region many of Jordan’s Christian bedouins who now live in Madaba — including the Karadsheh tribe from which the owner hails — immigrated from in 1890.

Christians are the only community in Jordan permitted to own liquor stores, but Carakale is open for anyone who wants to enjoy a beverage. Today, the brewery makes a blonde ale, pale ale, winter ale, a mocha stout, and, of course, the citrusy and slightly salty Dead Sea-rious. 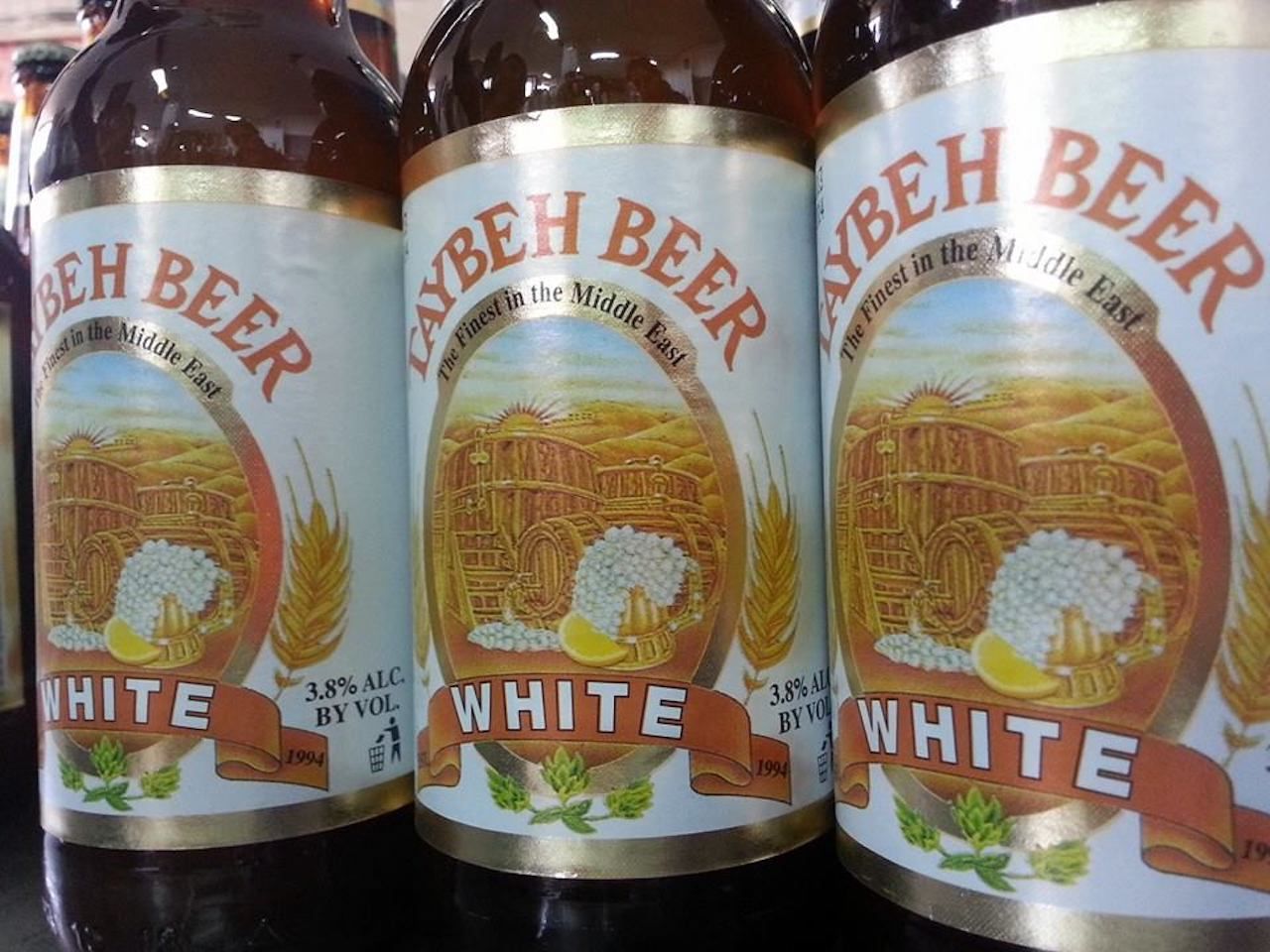 The West Bank not only has its own microbrewery, but it has what is arguably the oldest one in the Middle East. Founded in 1994, Taybeh Brewing Company is a craft beer maker from the eponymous Palestinian village — the last all-Christian community in the West Bank — located fewer than 10 miles north of Jerusalem.

Taybeh is Arabic for “good” or “delicious,” an apt adjective for the beer inside the bottles. For years, Taybeh Brewery has been producing German- and Belgian-style beers that are on par with, if not better than, many of the craft brews in Europe and the United States. The brewery also makes a special Palestinian spice lager that has hints of locally grown sage, za’atar, and anise.

Inventive brews like the latter, as well as the tried-and-true staples, have fueled Taybeh’s fame internationally. The beer is so enticing that some 16,000 people from all over the world descend on the village of less than 1,500 for the annual Oktoberfest celebration. It’s sold year-round in Denmark, France, Italy, Spain, Sweden, Switzerland, Japan, Israel, and the US. Selling in the US isn’t always easy. Due to labeling laws the Khourys are not allowed to use “Made in Palestine” on the bottles sent to the US. Instead, the label reads, “Product of the West Bank.”

Nevertheless, it was important for the owners, Nadim and David Khoury, to get their brews to the States — especially Massachusetts. Nadim lived in the Boston area for almost 15 years, and his son, Canaan, studied at Harvard. Fittingly, out of all the states with stores that sell Taybeh, Massachusetts has the most.

The Khourys face challenges like a dwindling population and a total lack of ports or airports. There’s ample reason for hope, though. Taybeh’s brand is well-established, and the founder’s son, after graduating from Harvard, returned to the family business. 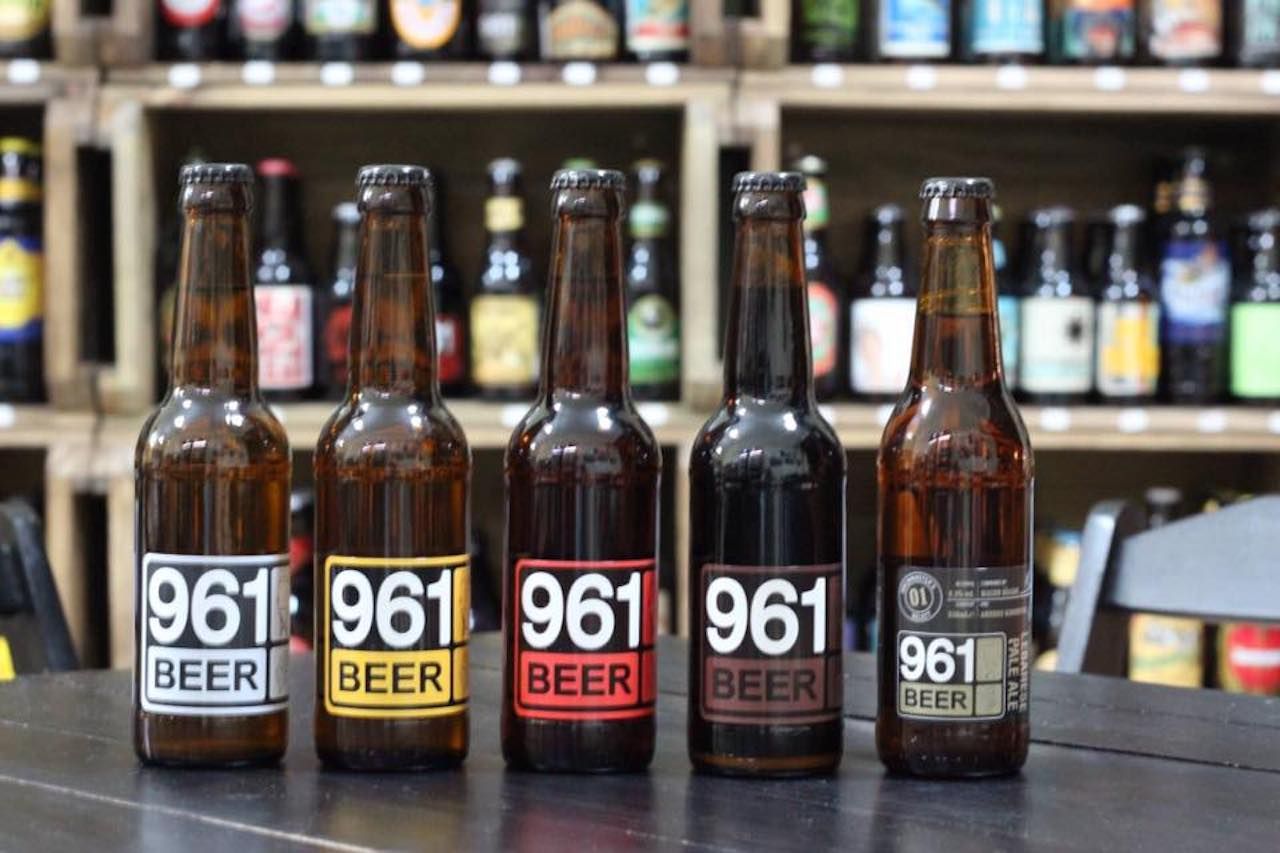 Once called the Paris of the Middle East, Beirut, exhausted but not defeated by Lebanon’s decades-long civil war, has retained its charm, and its inhabitants have retained their love of fine wining and dining. The streets are lined with an impressive array of swanky five-star hotel bars with long cocktail lists, hole-in-the-wall cafés with cheap beers and the popular anise-flavored liquor arak, and hip bars that college students and young adults flock to after hours. Beirut isn’t just the capital of Lebanon — it’s a capital of Arab youth culture, a hub for innovation in art, music, food, and drink.

Until recently, however, there weren’t any locally brewed beers worth mentioning. That changed during the 2006 war with Israel.

If a country at war doesn’t seem like an ideal incubator for a new business, much less a new microbrewery, it wasn’t. Gunfire, blockades, power outages, and explosions were regular occurrences. The founder of 961 Beer, Mazen Hajjar, nevertheless decided to start brewing from his home. (The name 961 sends a powerful message of unity: It’s the country code for Lebanon and is shared by all inhabitants regardless of background.) His creations sold so well that he was able to rapidly grow his consumer base.

During the early days, the brewery’s offerings were limited. Today, 961 offers an American IPA, a lager, a porter, a red ale, a witbier, and a Lebanese Pale Ale. The latter is brewed with thyme, sumac, chamomile, sage, anise, and mint — all spices commonly found in the country’s markets. 961 is distributed in the US and parts of Europe, Asia, Africa, and New Zealand. 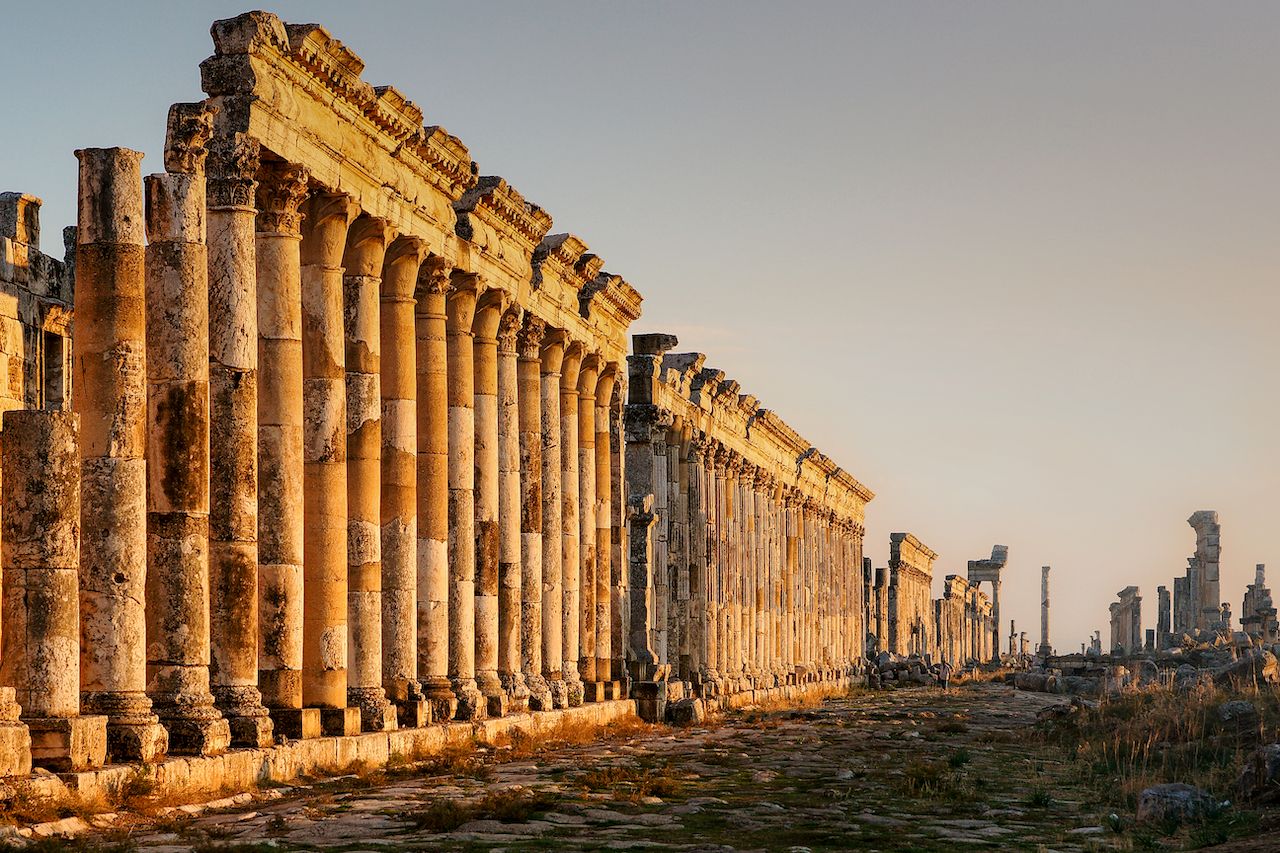 In a country embroiled in conflict, it might seem somewhat counterintuitive that a microbrewery has survived what ancient ruins like those at Palmyra have not. Yet the story of Syria’s Afamia Beer in the suburbs of Damascus is full of tragic ironies and improbable triumphs.

As with Carkale, Taybeh, and 961, everything is in the name. Afamia is the Arabic pronunciation of Apamea, an ancient city on the bank of the Orontes River, about 35 miles north of modern-day Hama. Temples, ceramic-filled churches, baths, residences, shops, amphitheaters, and more have been unearthed at Apamea.

Afamia beer appeared on the scene at the most inopportune moment. Production at the brewery was set to start in 2010, but the Arab Spring reached Syria in 2011, which led to the civil war still being fought today. Afamia founder Aamer Rustum had to press pause. By 2017, though, things around the capital had calmed down enough for Aamer to try again.

At the time of writing, Afamia only offers two beers that are sold in bars around Syria. It’s a new beginning for a region with a long brewery history. This is, after all, the land that gave the world the 4,500-year old Ebla tablets, which document the variety of beers that were produced in the ancient city.

CultureYour guide to drinking laws in the Arab world
Tagged
Food + Drink Beer Middle East
What did you think of this story?
Meh
Good
Awesome

NEOM is on track to be the world’s first “sustainable” city. Here’s what we know

Israel is opening to vaccinated travelers on May 23

The ultimate week in Dubai, from desert ziplining to heart-shaped lakes

Dubai just opened the deepest pool in the world, with a ‘lost city’ to explore

What kind of adventure traveler are you?

How to enjoy the world’s cheapest beer in Hanoi

This haunted 19th-century brothel is our favorite hotel in Albuquerque