Ari Aster’s 2019 horror flick Midsommar did for Swedish holidays what James Cameron’s Titanic did for transatlantic voyages in 1997. It used a real-world event, an annual one in Aster’s case, as the backdrop for a film so indelible it was all anyone could talk about for weeks after they saw it. Only instead of drumming up interest in steamship engineering through what some consider the greatest love story of the 20th century, Aster spiked Google traffic in favor of Sweden’s most significant summer holiday through a psychedelic nightmare that was equal parts distressing and breathtaking until its final frame.

It’s fitting that Midsommar is framed around American anthropology students who are invited to experience the festivities. With curiosity piqued, Midsummer tourism has the potential to become a new requisite for scary-movie-loving Eurotrippers. As with any cultural practice foreigners are keen to observe, though, the first step to participating respectfully is being informed. And even if Aster’s terror-filled take on the events scared you off from attending a Midsummer celebration in person, it’s a fun and fascinating event that’s worth learning about.

Here’s everything you need to know about Midsummer, from what the movie got right and wrong to what’s going on this year.

Midsummer, known as Midsommar in Sweden and by other names elsewhere, takes place during the summer solstice in the Northern Hemisphere, falling in late June on the longest day of the year. In Sweden that means the sun never, or just barely, sets on the festivities.

Midsummer is massive there, with flower crowns and maypole dances, fresh air and love in the air, plates of pickled herring and drinking songs belted over spiced schnapps. Some have even petitioned to make Midsummer’s Eve the country’s national day, which currently falls on June 6.

Swedes are not the only ones who celebrate the summer solstice in pre-Christian style, however. A festival called Juhannus is similarly considered a national holiday in Finland. In Norway, Midsummer goes by Sankthansaften, while in Denmark it’s called Sankt Hans Aften.

Beyond the Nordic bubble, European nations from Portugal to Hungary, and even a few outside like Canada and Brazil, participate in the Christianized St. John’s Day. In Latvia, St. John’s Day is called Ligo or Jani, and it’s the biggest event of the year.

How’d it all get started? 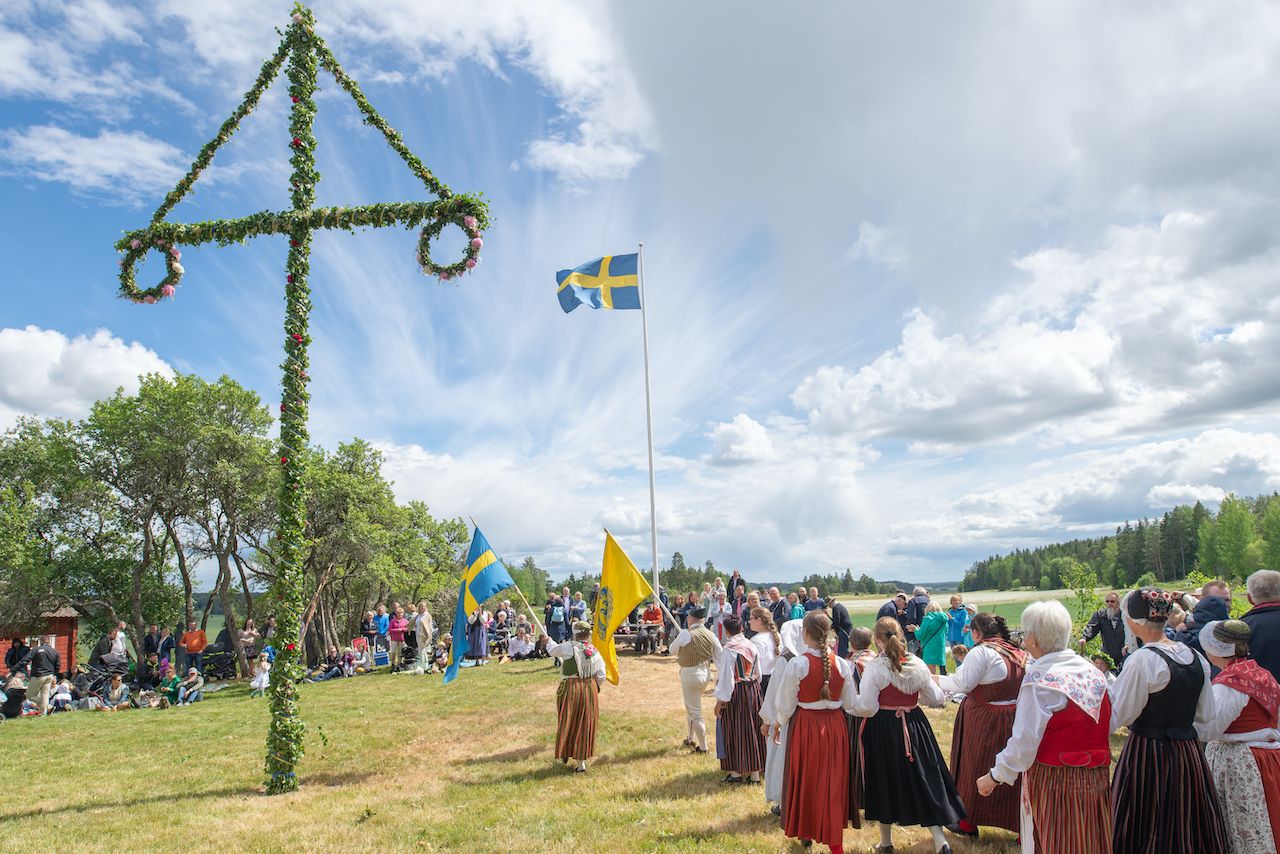 Midsummer festivals began as agrarian rituals designed to welcome summer and encourage fertility. Sweden’s festivities originated in the center of the country, revolving around the white night that follows the midnight sun, whose lasting power increases as you travel north toward the Arctic Circle. According to pagan lore, folk magic abounded when the line between day and night, our world and the world of spirits, good and evil, was thinnest.

Bonfires have marked the occasion across Europe since the sixth century. Over time, the Midsummer celebration developed more intricate traditions. Maypoles were introduced around the 16th century. To this day, they’re covered in foliage and flowers, which celebrants will also use to adorn their houses and themselves. In the past, “green men” similarly outfitted themselves in ferns from head to toe, and many still don colorful wreaths in their hair.

As Christianity swept Europe in Late Antiquity and the Middle Ages, John the Baptist’s nativity, which is recognized on June 24, became entangled with the pagan solstice festival that typically fell between June 19 and June 25. Accordingly, Midsummer’s Eve is, in many places, called St. John’s Eve, though the original traditions remain relatively intact. In Sweden, the holiday’s Christian heritage has been largely cast aside with any pagan lore, as celebrants once again gather simply to appreciate the arrival of summer itself. 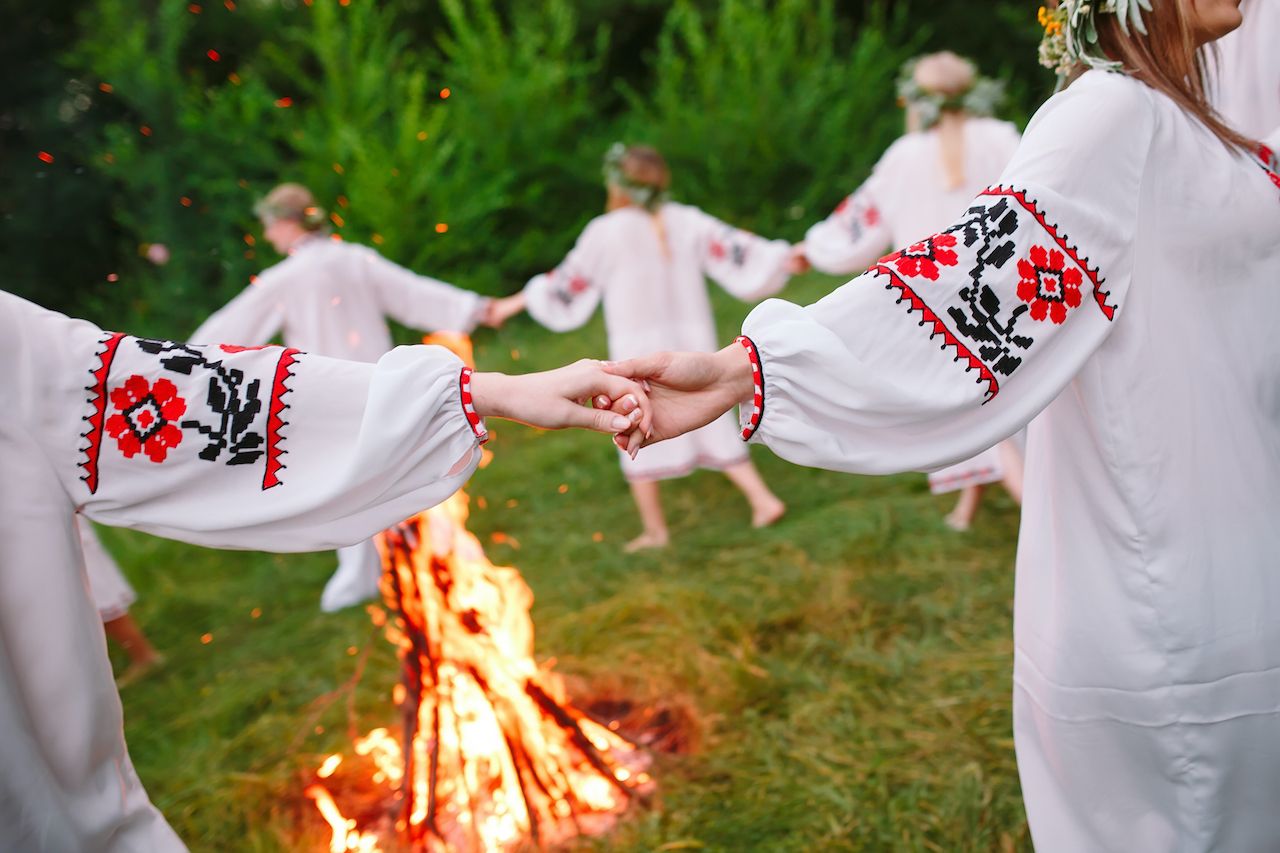 Aster did his research when writing the script for Midsommar, but what viewers see on screen is the product of artistic liberties, some obvious and others less so. The film gets the general aesthetic right: Greenery-covered maypoles do take the shape of a cross with wreaths hanging from either end. People do dance around them or sing silly, sometimes racy, folk songs. Some dress up in traditional garb like you see in the movie, though the all-white costumes were a cinematic touch, while others dress normally but put on flower crowns.

Other aspects of the film feature half-truths. Midsummer is a party, and inhibitions are lowered accordingly. Drinks flow freely, primarily beer and schnapps, but psychedelic drugs are not associated with the festivities as seen in the movie. Midsummer is identified with love and fertility. Women traditionally picked flowers to lay under their pillows and ate salted porridge so their suitors or husbands, respectively, would visit in their dreams. Today, flings are expected as they are during any event in which copious amounts of booze are consumed, yet the love and sex rituals portrayed on screen are wildly exaggerated, if altogether fictionalized.

And then there’s the ending. Spoilers aside, it’s safe to say that the movie’s most scarring, climactic scenes are inventions of the horror genre. Themes involving violence and death are mainstays of scary movies, not Midsummer staples. Rest assured that if you ever get invited to celebrate in Sweden, the worst that’ll happen is waking up with a wicked hangover.

Culture9 Experiences To Immerse Yourself in the Sámi Way of Life in Arctic Europe
Tagged
Festivals
What did you think of this story?
Meh
Good
Awesome