“I will always live in Minneapolis. It’s so cold it keeps the bad people out.” Prince’s quote sums up a lot about his hometown. The people really are as nice as the Minnesota stereotype would have you believe: courteous, mild-mannered, and authentically friendly. And yes, it gets cold, like sub-zero cold. But Prince failed to mention what an exciting, dynamic, food-forward city Minneapolis really is. It’s full of cultural offerings, inventive restaurants, hip hotels, and impressive art. In other words, the Mini Apple is cool — even when it’s unbearably cold out. Here are all the coolest things to do in Minneapolis no matter the season.

1. Have all three meals at Restaurant Alma. 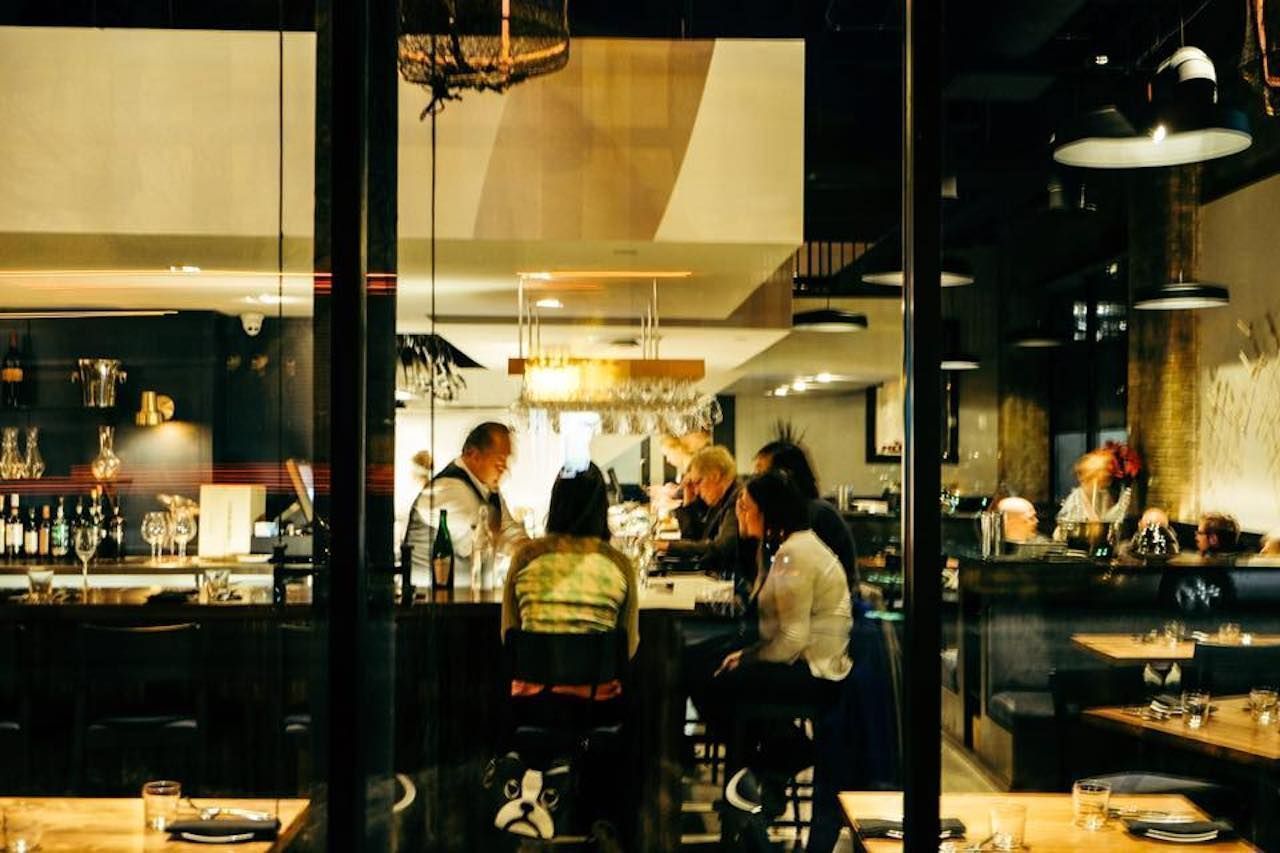 Not only did Chef Alex Roberts put Minneapolis on the culinary map with Restaurant Alma, a farm-to-table restaurant that continues to impress with its seasonally inspired three-course fixed price menu (reservations are strongly recommended), but he also added a buzzy breakfast and lunch café (don’t miss out on the scones) and a coveted seven-room boutique hotel above. All the rooms are cozy and full of character with exposed brick walls, canopy beds, and handmade toiletries. 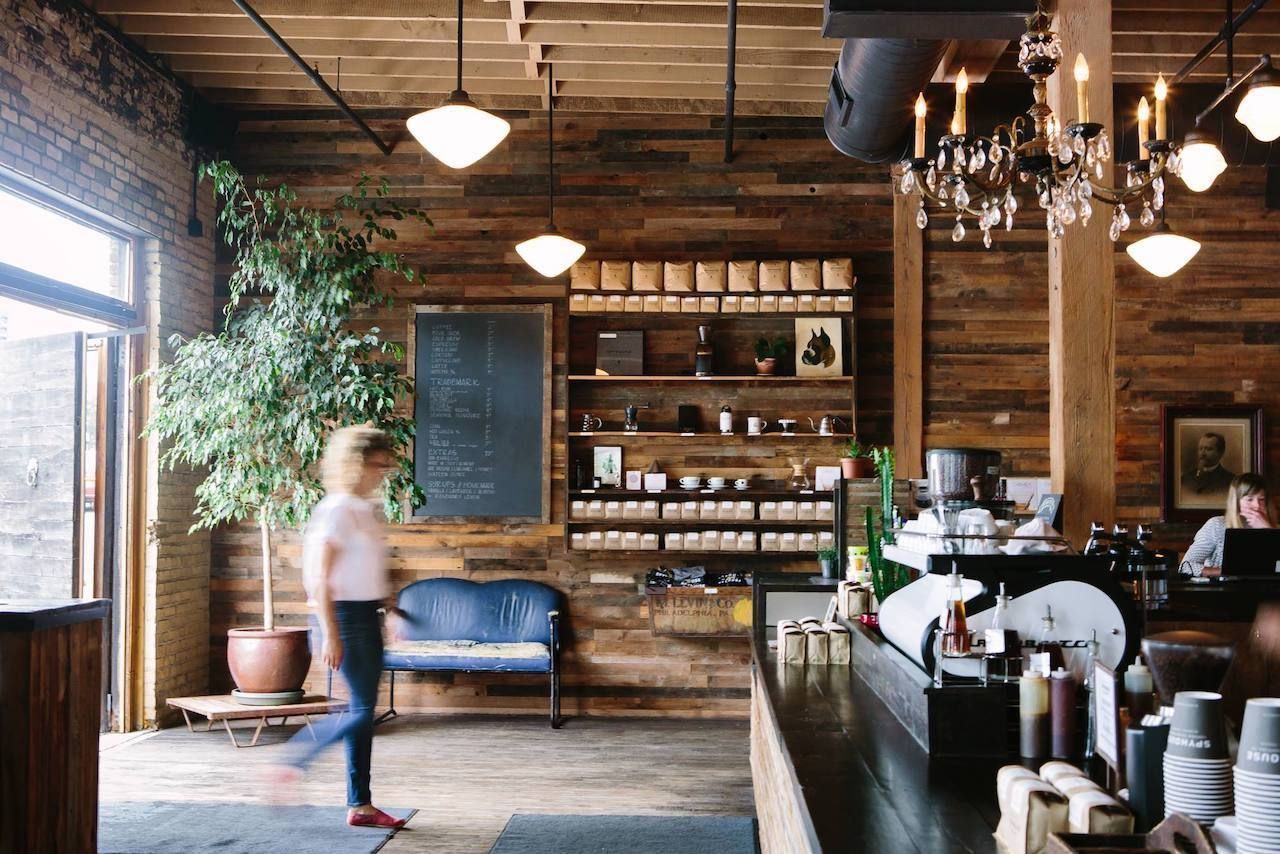 It’s not just the ethically sourced, small-batch beans that set Spyhouse Coffee Roasters apart. Baristas weigh the grounds for each Kalita Wave pour-over, the honey and lavender Spygirl latte is made with local honey, and local dairy and pastries from Black Walnut Bakery are beyond good. The minimalist aesthetic and ambient buzz at all six locations only add to the good vibes. And if you stay at the newly renovated  Emery hotel downtown, you get Spyhouse right in the lobby. 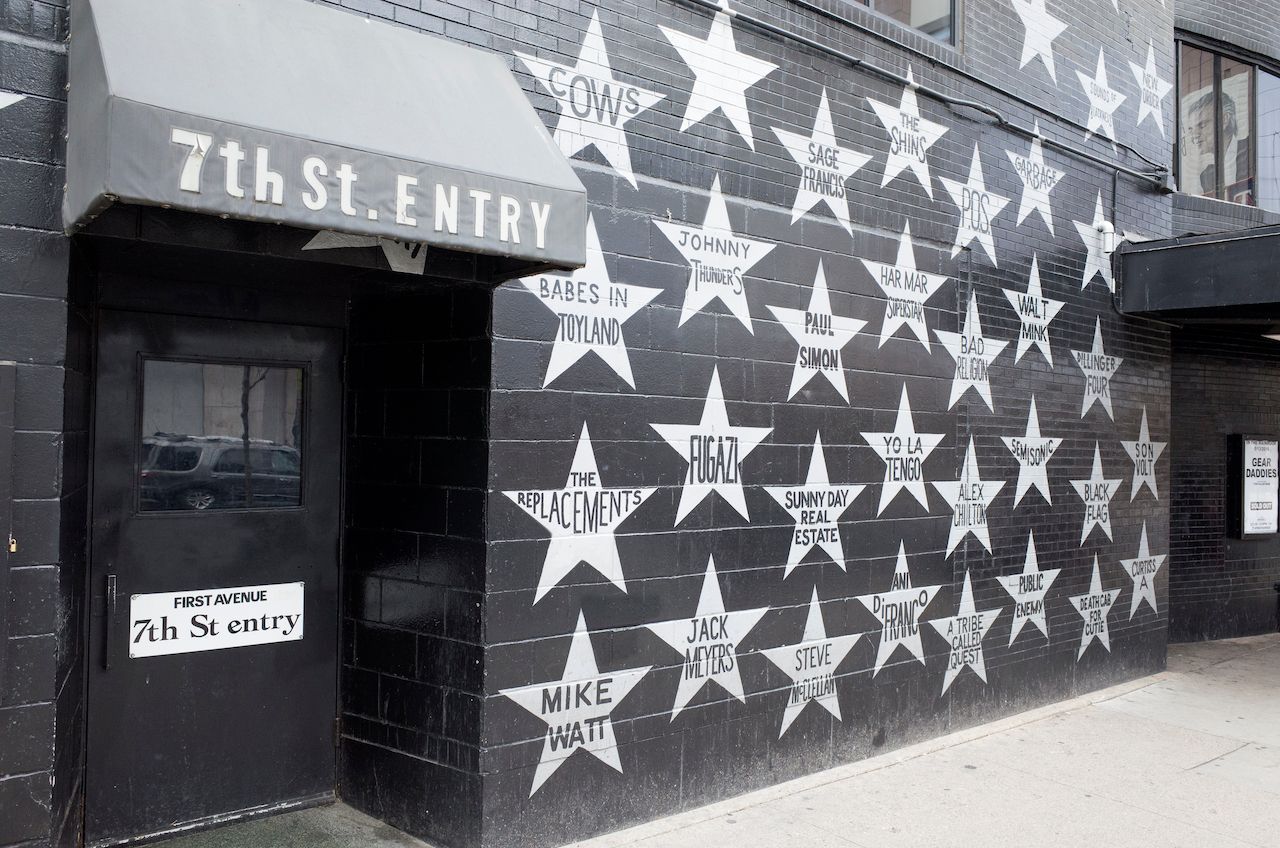 Minneapolis has many places where you can pay homage to Prince — Paisley Park, Schmitt Music mural, and Electric Fetus to name a few), but none quite channel Prince’s spirit like First Avenue. The iconic danceteria is not only where Prince rose to fame and regularly performed shows but also where he filmed “Purple Rain.” A must-stop for acts like Wilco and Neko Case, whether you’re watching an act in the Mainroom or the more intimate 7th St Entry, it’s still one of the most iconic rock clubs in the country.

4. Pick up a vinyl at Electric Fetus. 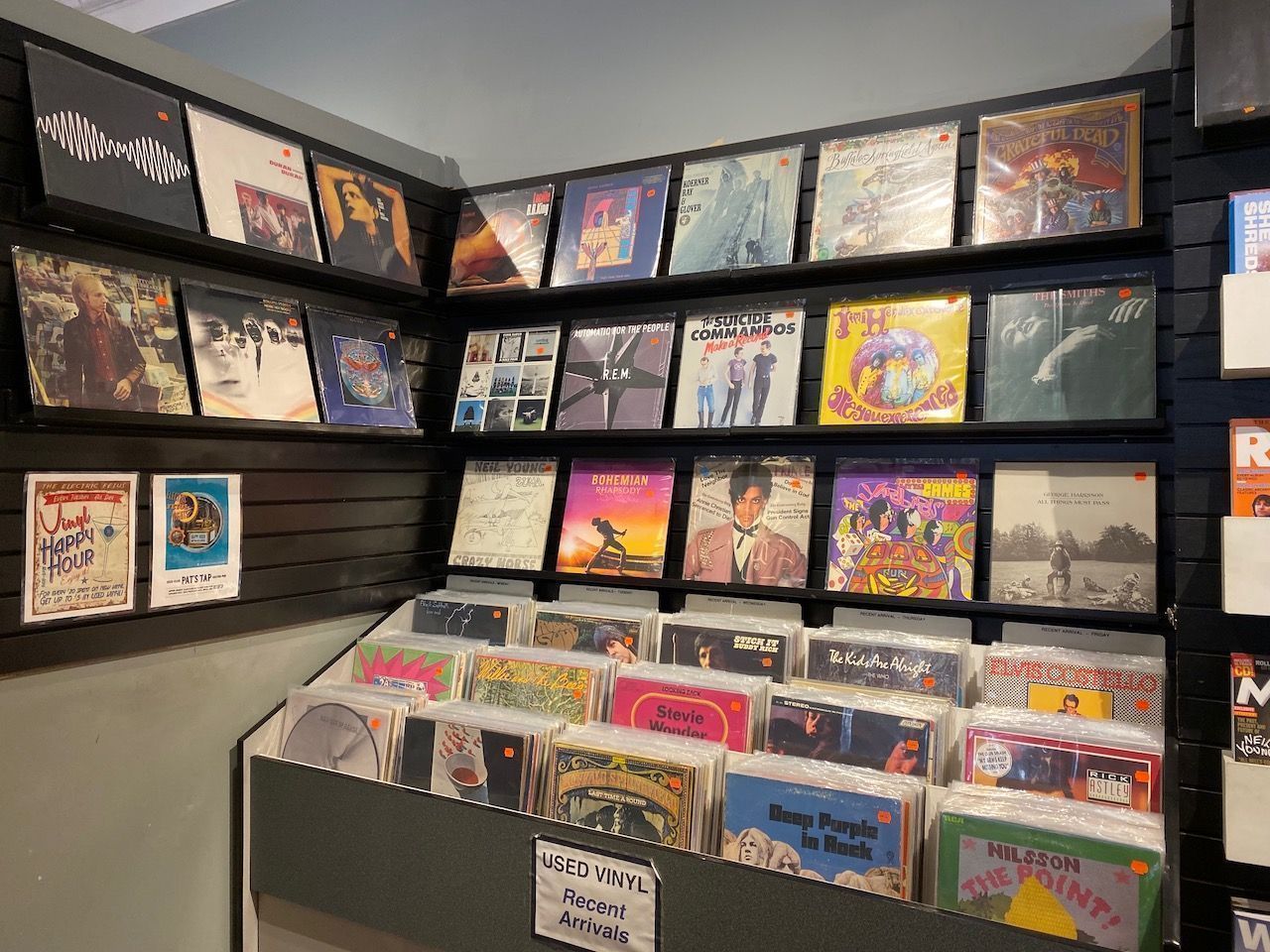 1968 made history in a big way. It was the year Star Trek aired American TV’s first interracial kiss. It was the year Apollo 8 orbited the moon. And it was the year Electric Fetus opened its record store doors. Known for its insane selection of both popular and rare vinyl, and as the place Prince went to buy music (he called it the “wrecka stow”), Prince says it best: “Like books and black lives, albums still matter.” 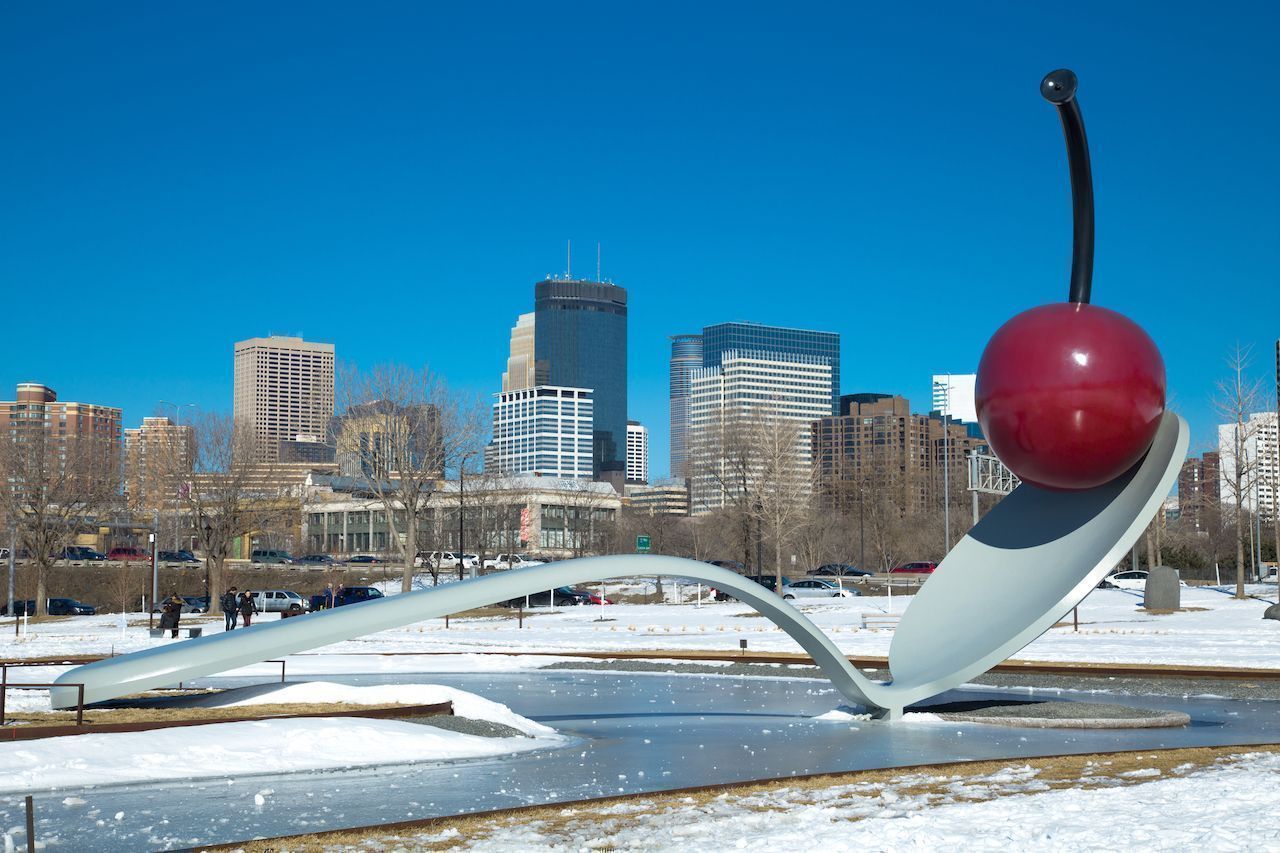 No, you really shouldn’t go to a museum just so you can brag about all the famous art you saw, but at the Walker Art Center you really can’t help it. It’s a who’s who of contemporary art, oh la la over works by Yoko Ono, Andy Warhol, Frank Stella, Cindy Sherman, and Kara Walker. Admission is $15, or free on First Saturdays and Thursdays 5:00 to 9:00 PM). After, stroll the Minneapolis Sculpture Garden, a free park outside the Walker that’ll have you taking selfies next to Claes Oldenburg’s irreverent Spoonbridge and Cherry, Robert Indiana’s Love and Katharina Fritsch’s 20-foot ultramarine rooster.

Continue onto the Weisman Art Museum, and by all means, judge it by its cover. Located on the banks of the Mississippi on the University of Minnesota’s Minneapolis campus, outside you’ll find a Frank Gehry designed stainless steel building, a visually arresting silver statement of undulating steel, all curves, concaves, and angles. Inside you’ll find more than 20,000 works of art. Expect to be double wowed. Free admission and free public tours are held every Saturday and Sunday at 1:00 PM. Note that the museum is closed on Mondays.

6. Take in the views at Guthrie Theater’s Endless Bridge and Amber Box. 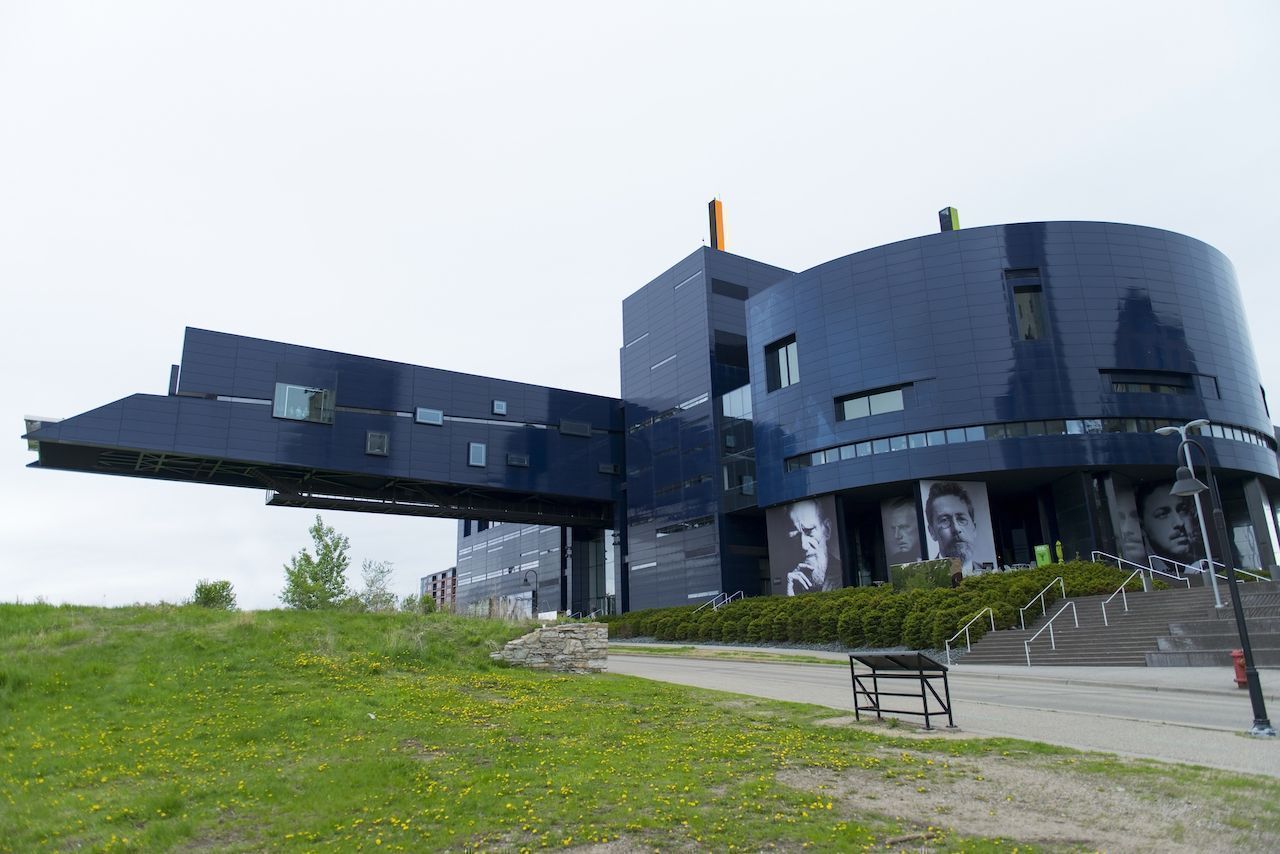 The Guthrie is a theater with a view. Take the steep escalator climb up to the “Endless Bridge,” a 178-foot cantilever walkway with panoramic views of the Mississippi River, Stone Arch Bridge, and St. Anthony Falls. Then there’s The Amber Box on the ninth floor, another cantilever that provides a near 360-degree view of Minneapolis through its skewed yellow windows. 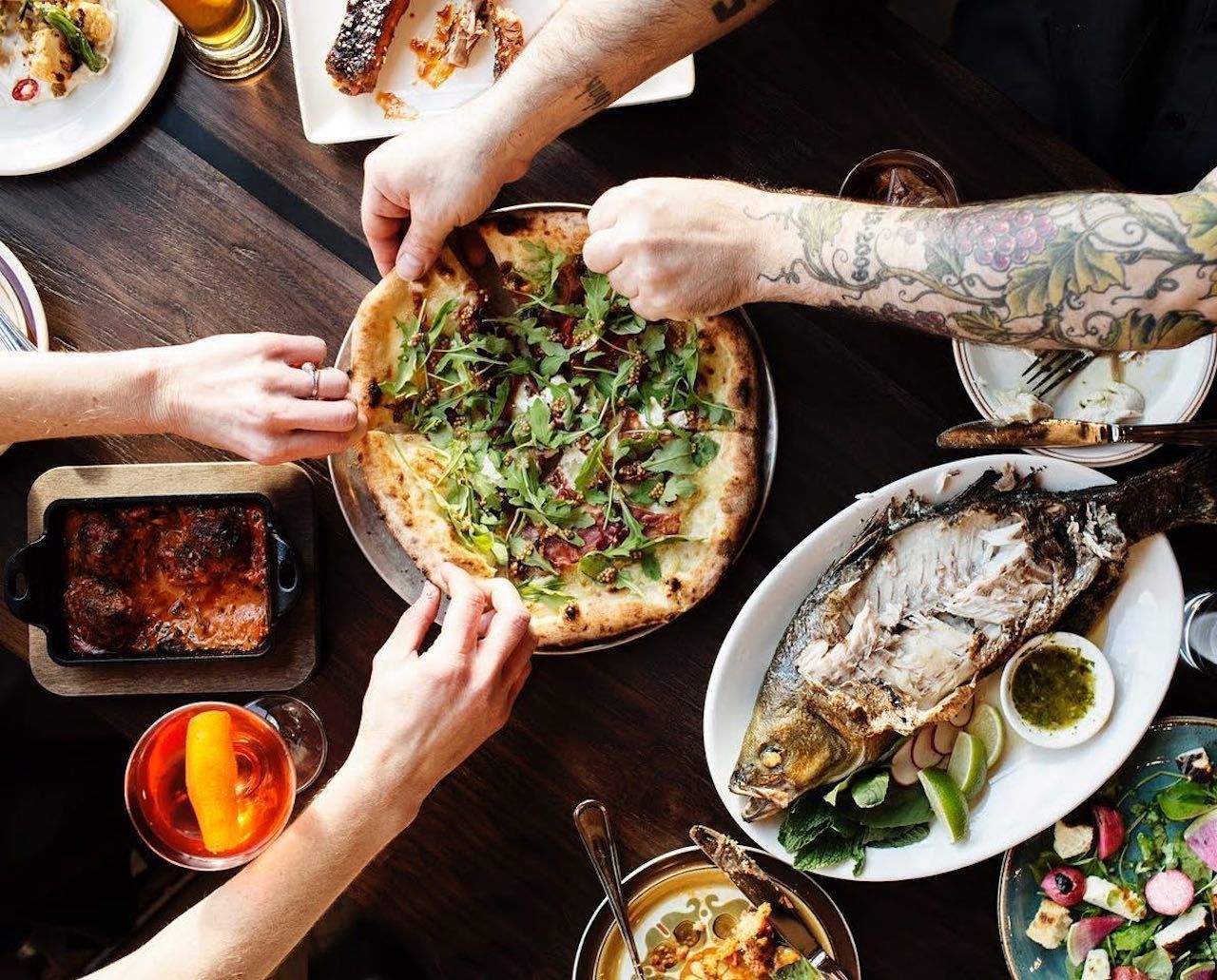 You probably didn’t think Minneapolis had the best pizza ever, but that’s exactly what you’ll be saying after you eat at Young Joni, a lively restaurant in the Northeast neighborhood. Everything on the menu is worthy, but life-changers include a short rib and scallion-topped pizza, a perfectly charred Japanese sweet potato plate, a broccoli feta pie with preserved lemons and almonds, and a cauliflower saffron dish that’ll have you licking the plate (use your pizza crust). You won’t leave room for dessert, but order the Church Basement Cookie and Bar Plate anyway. No food regrets here. 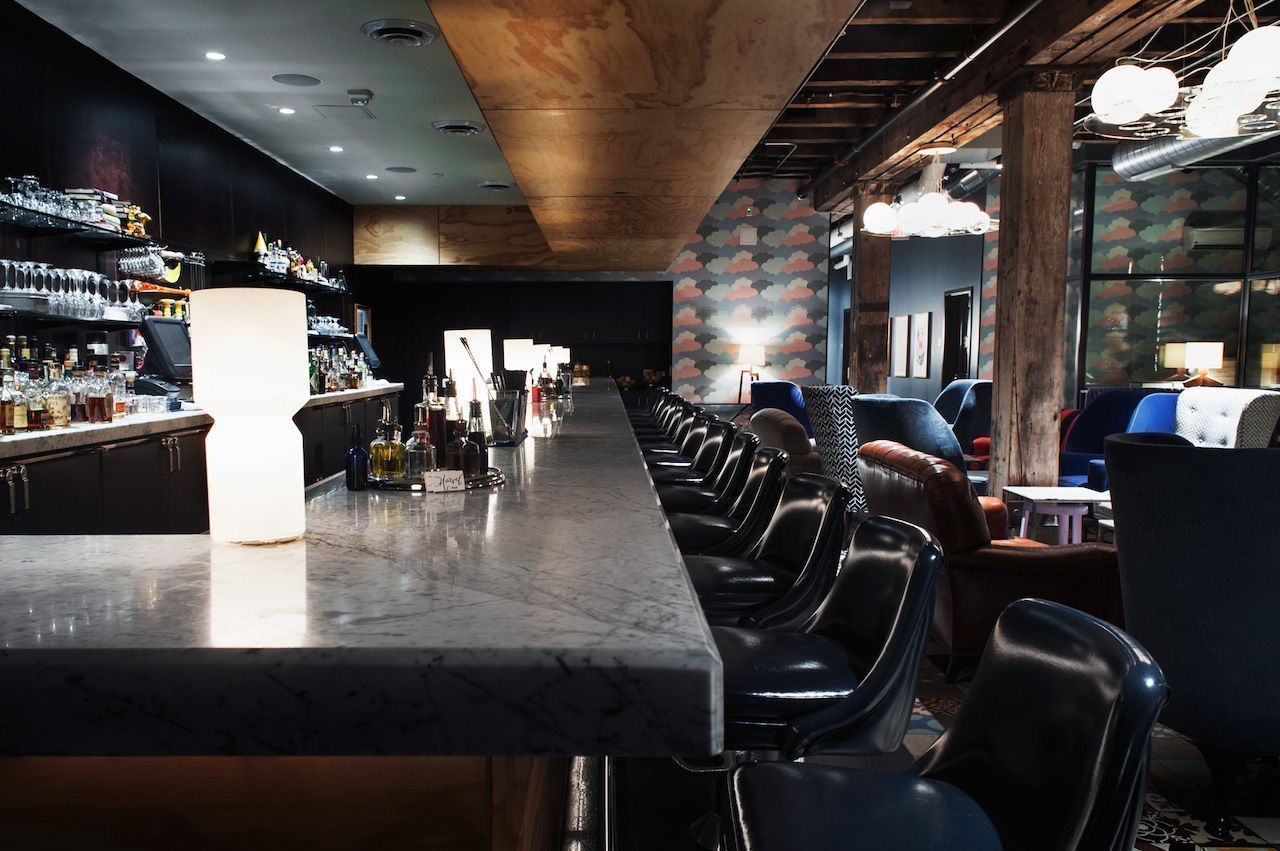 The entrance to Marvel Bar is a nondescript door beneath The Bachelor Farmer restaurant in trendy North Loop. The drink menu reads like a potable poem of licorice root, charred red pine, cascara honey, and milkweed shrub. The bartenders are armed with medicine droppers, ice picks, and knowledge. All of the above add up to an intoxicating treat for both imbibers and abstainers. Marvel has an impressive menu of dry drinks as well.

9. See a show at the Fillmore Minneapolis. 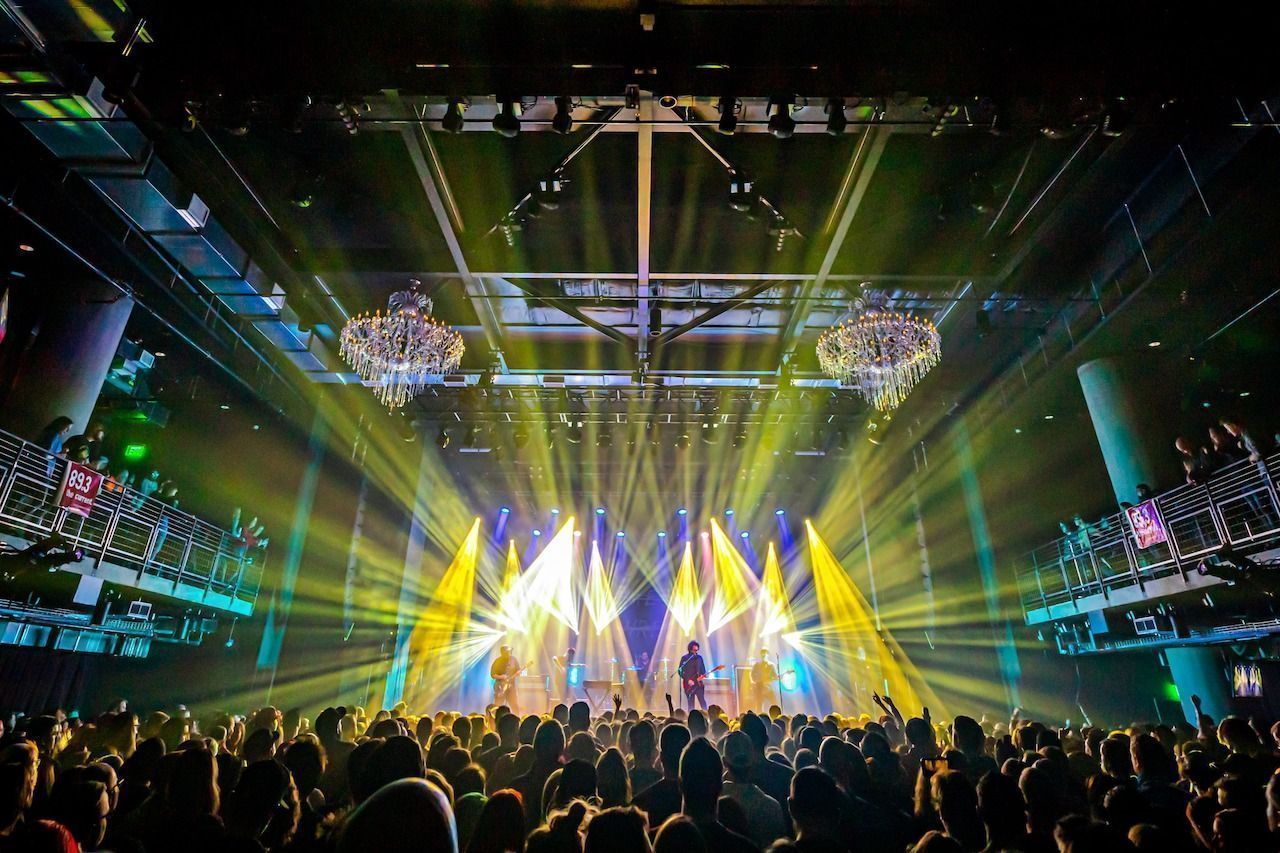 Put a big-name act on an intimate yet swanky stage — say, Brandi Carlisle in a 1,850-person venue — and you get unforgettable music magic. That’s what the Fillmore Minneapolis did, a brand spanking new space complete with velvet draped walls, opulent crystals chandeliers, and crisp acoustics. Both general-admission dance floor seats and the pricier balcony VIP boxes guarantee a superb view of the stage and a music memory not to be taken for granted. 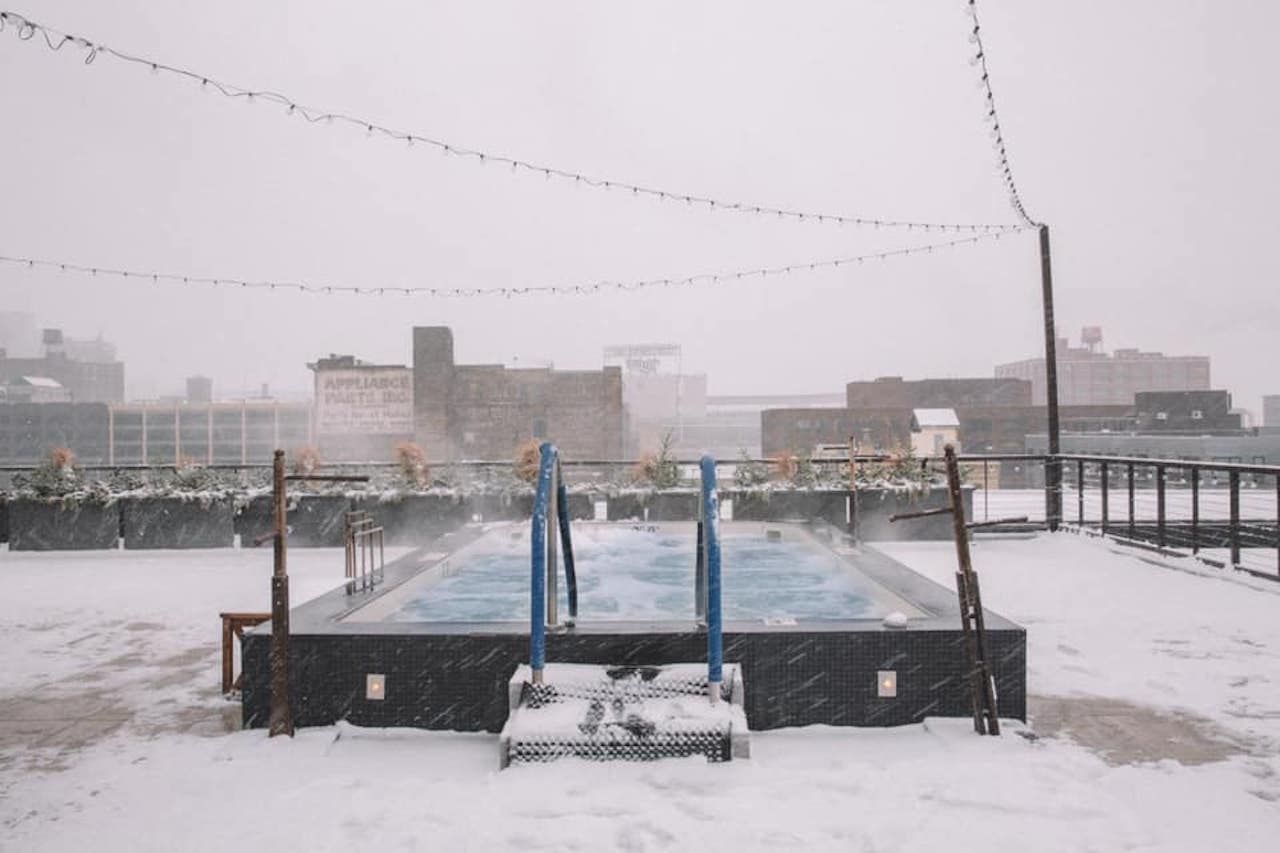 Hewing Hotel scores big on the hipster checklist: Dog-friendly (check), Nordic-chic restaurant with shareable plates (check), Faribault Woolen Mill blankets on beds and locally sourced art on walls (check). But it also rises above, literally. The hotel’s sixth floor has a gorgeous bar, a 20-person cedar wood sauna, and a heated outdoor rooftop pool. That means you can sauna, dip, sip, and repeat all while taking in the spectacular city views. The pool and sauna are complimentary for hotel guests; day passes are also available for $35 per person on weekdays and $45 on weekends.

11. Gaze up at Minnehaha Falls. 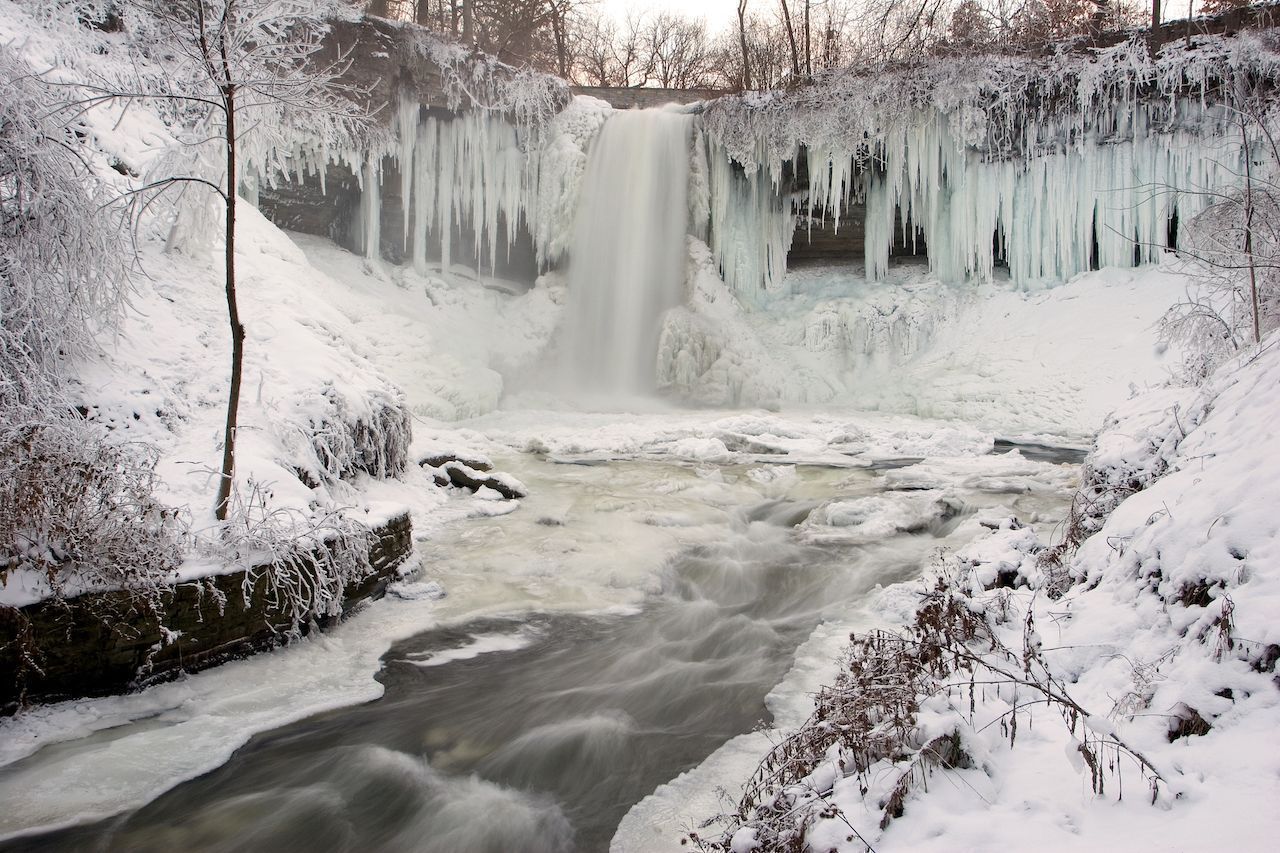 What’s the only thing better than a 53-foot waterfall flanked by limestone bluffs? A frozen 53-foot waterfall flanked by limestone bluffs. Sure, Minnehaha Falls is stunning in summer, but the frozen facelift turns it into a white wonderland of cascading icicles and frosted snow. Bundle up and wander the surrounding trails and bridges along Minnehaha Creek. 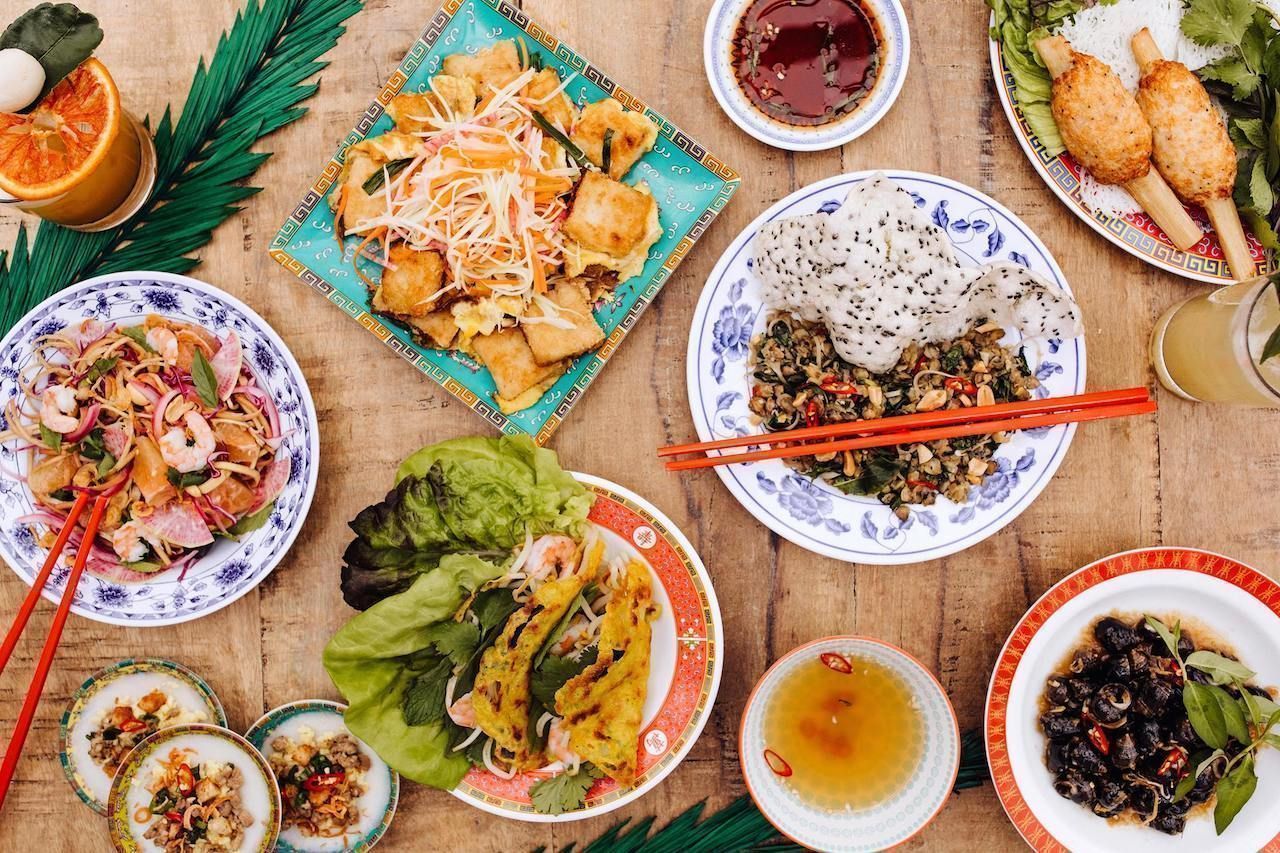 The 10 Best Summer Festivals in the Twin Cities

7 Facts That Make Minneapolis Such a Rad City