Mississippi may be better known for its Delta catfish and beautiful beaches along the Gulf Coast, but there’s another perhaps lesser known (at least among outsiders) dish the state is known for: tamales. The Mississippi tamale trail dissects the Magnolia State, and for people who are curious about how food can shape culture, it’s worth a visit. The Mississippi tamale trail tells a tale of the history and the connection of two distinct cultures that came together in delicious fashion. Like a Gulf Coast road trip highlighting beer and blues music, this road trip is all about this region’s legendary culinary chops.

While the tamale has been part of Mississippi’s culinary history for several generations, it wasn’t until the early 2000s that it found the spotlight, thanks to the Southern Foodways Alliance, which worked with food historians and photographers to preserve the history of tamales. The Hot Tamale Trail is the result of that documentation.

Why are tamales so popular in Mississippi

There are several schools of thought as to how and why tamales became a ubiquitous influence on Mississippi’s food scene, one of which is that following the Mexican-American war, soldiers from Mississippi brought tamale recipes home with them.

Another, more likely theory, however, is that Mexicans who migrated north and eventually east, worked alongside African-Americans, passing along culinary traditions that began to appear on dinner tables in the Mississippi Delta. Tamales found their way into homes and restaurants in small towns that make a trail from the Tennessee border down to the Gulf coast.  As the two food cultures married, Mississippi tamales evolved, becoming distinctly different from their south-of-the-border cousin.

“They’re smaller and spicier,” says Mary Beth Lasseter, associate director of the Southern Foodways Alliance. “The outside of a Delta tamale is made of cornmeal rather than corn flour, and they are simmered rather than steamed.”

Regardless of the recipes, there’s a common connection between all tamales on the Mississippi tamale trail: They’re made with an ancestral knowledge in the same way most have been made for generations — by hand. And the best places to find them are those charming family-owned restaurants one finds in small towns along the trail.

Add to this all the country cooking like fried catfish, po’ boys, greens, okra and barbecue. Throw in some tamales, and you have a food culture unlike that found anywhere else.

It would take days, if not weeks, to travel the entire trail and sample each tamale, so here are some of the best places to find them in the Delta, an area of the South that holds mystery, history, beauty and flavor all its own. It’s not just the tamales that taste slightly different from each other, it’s also the sense of place and the ambiance that you’ll experience at each stop along the Mississippi tamale trail.

Where to stop along the Mississippi tamale trail 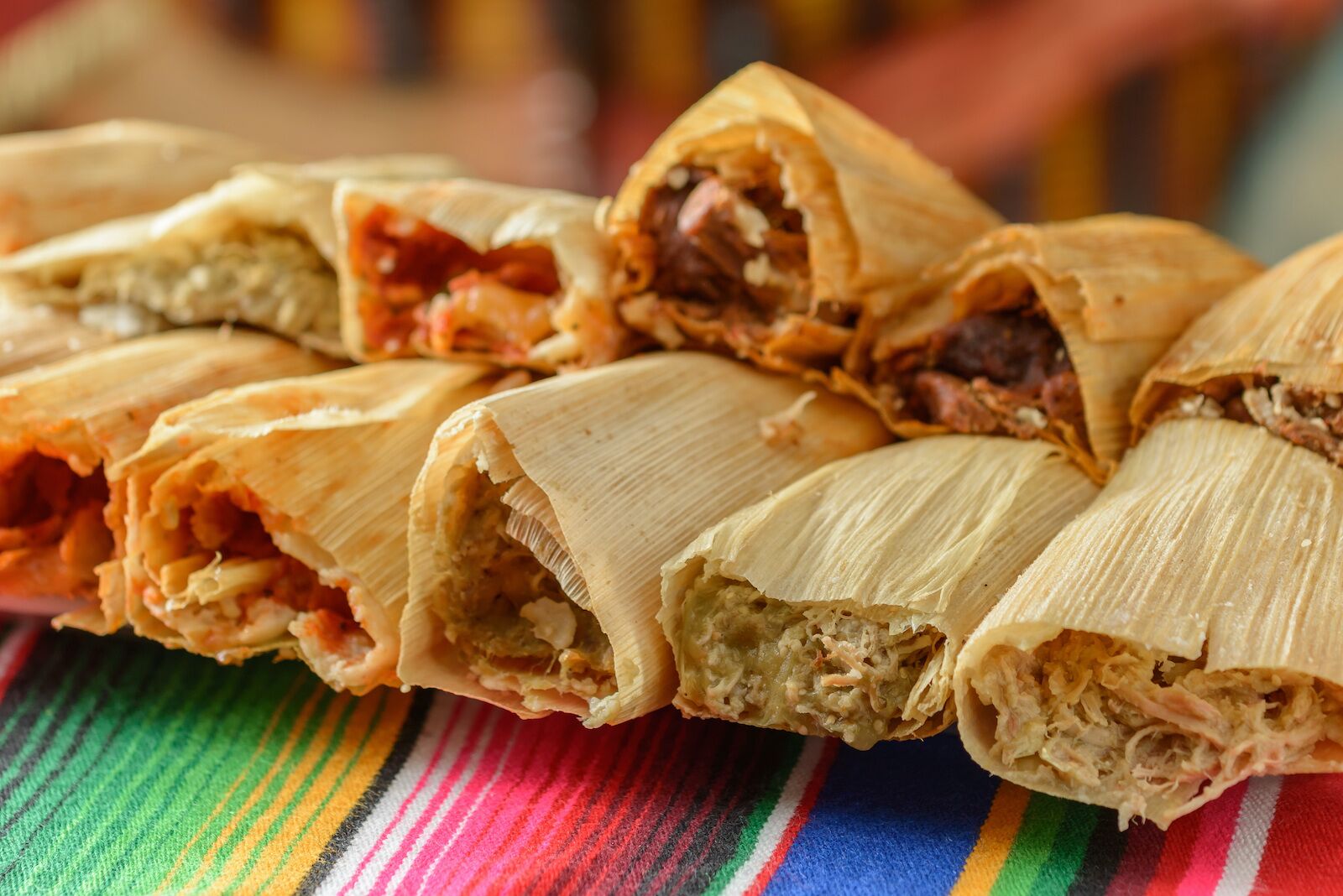 The road into Rosedale down Highway 1 is a lonely, lovely stretch of the American South, banked by field after field of cotton ripening beneath blue skies. Once inside the city limits, there’s a block of retail that’s seen better days, with ramshackle architecture and shuttered businesses.

Most people still come to Rosedale with one thing in mind: Getting a plateful of tamales at White Front Café-Joe’s Tamale Shack. It’s a blink-twice-you’ll-miss-it kind of place — just a small, shotgun building with white siding and a historic marker in the small front yard letting visitors know they’re on the Tamale Trail. Joe Pope opened his tamale business decades ago, and upon his death, sister Barbara Pope took over.

That’s all she serves — tamales made by hand and served with soda crackers. But that’s enough. “People come here specifically to get tamales,” she says.

Greenville is ground zero for tamales, with so many tamale places, it’s hard to count.  One place everyone should stop is Perry’s Sho-Nuff where more than 200 bundles of tamales are made each week — six to a bundle.

“To make tamales, you gotta like what you’re doing,” says owner Perry Gibson.

Another is Doe’s Eat Place — reservations strongly suggested. Doe’s is located in an old downtown neighborhood inside a clapboard house. Doe’s steaks are legendary. And tamales? They’ve been doing them the same way going on 100 years and are different from others you’ll find along the Tamale Trail. Doe’s has its own seasoning blend and wraps its tamales in waxed paper, a process that makes a sturdier tamale that’s easier to eat. Following the waste-not-want-not philosophy, it uses steak trimmings to make its tamales, says Charles Signa, son of founder Big Doe Signa.

For a change of taste, make your way to Hot Tamale Heaven and Grille where tamales come in traditional bundles, tied and tucked in corn husks. But they’re also found in nachos, a salad, fried and served with ranch, and, a house favorite: a loaded tamale pie with layers of tamales, jalapeno peppers, homemade chili, queso cheese and a big dollop of sour cream.

There are so many tamale eateries here, Greenville’s moniker is the Tamale Capital of the World and celebrates with its annual Hot Tamale Festival held every October.

There are several places in Clarksdale to get your tamale fix, but the one that’s been there the longest and is also an official stop on the Tamale Trail is Abe’s BBQ and Tamales. Order a plate of mouthwatering barbecue  — you’ll smell it smoking as soon as you get out of your car — along with a side of tamales. The tamales come in bundles of three served with soda crackers and a side of slaw plain or smothered with chili and cheese. Or try one of the Tamacos, a taco salad married to a tamale.

Clarksdale’s number one claim to fame that it’s Blues Capital of America. The blues are played every night of the week in clubs around town, such as the intimate setting found at Bluesberry Café. If you choose to stay the night in Clarksdale, book a night at Shack Up Inn. It’s a collection of restored sharecropper shacks that highlight the historic roots of the cotton industry.

In downtown Cleveland, spend an afternoon perusing the shops along historic Cotton Row, then stop by the Cotton House Hotel, and its signature restaurant, Delta Meat Market where Chef Cole Ellis, a 2017 semi-finalist for the James Beard Award “Best Chef South,” serves Delta tamales as a special several days a week.

And at Airport Grocery, a restaurant that began life as a grocery store, the menu is filled with a variety of choices from salads to burgers and more, but tamales are a daily favorite learned decades ago from Joe Pope of White Front Market-Joe’s Tamales Shack in Rosedale. Some things never change, and that’s a good thing.

A must stop for any music-history lover is Dockery Plantation where local musicians once gathered, including blues legends Robert Johnson and David “Honeyboy” Edwards. Today, the farm, also known as the Birthplace of the Blues, is on the National Register of Historic Places and pays tribute to those musicians, as well as its past as one of the largest cotton farms in the Delta.

Pea Soups Lott-A-Freeze has been an institution in Indianola for the past 55 years, serving big platters of fried shrimp dinners, Delta catfish, burgers and barbecue. However it’s the tamales that put this small diner on the map. Brenda Lott, who owns the restaurant with her husband, Thomas, says it’s the secret seasoning they use to simmer the tamales that makes the difference.

The tamales are hand-rolled by a local tamale-maker, then cooked in the kitchen at Pea Soup’s and sold by the half-dozen or a dozen. You can also find the same tamales right next door at Lost Pizza, where Preston Lott — yes, that’s Brenda and Thomas’ son — and his partner, Brooks Roberts, sell them alongside pizza.

A trip to Indianola is not complete without a visit to the B.B. King Museum. The town is where the modern-day King of the Blues grew up, and the museum is located in an old cotton gin where the man himself once worked.