Most people go to libraries to read or check out books — not stare in awe at the 15th-century wood paneling and stained-glass windows. In many libraries around the world, however, the buildings’ stunning aesthetics are just as appealing as their content, making you almost forget what book you were looking for in the first place. Since libraries are essential to the learning process, it’s no surprise that some of the most impressive libraries are located in universities. While we tend to think the world’s most beautiful libraries belong exclusively to the hallowed grounds of European institutions, the United States and Asia are home to very impressive structures that give Europe a run for its money. From Oxford in England to Akita City in Japan, these are some of the most beautiful university libraries from around the world. 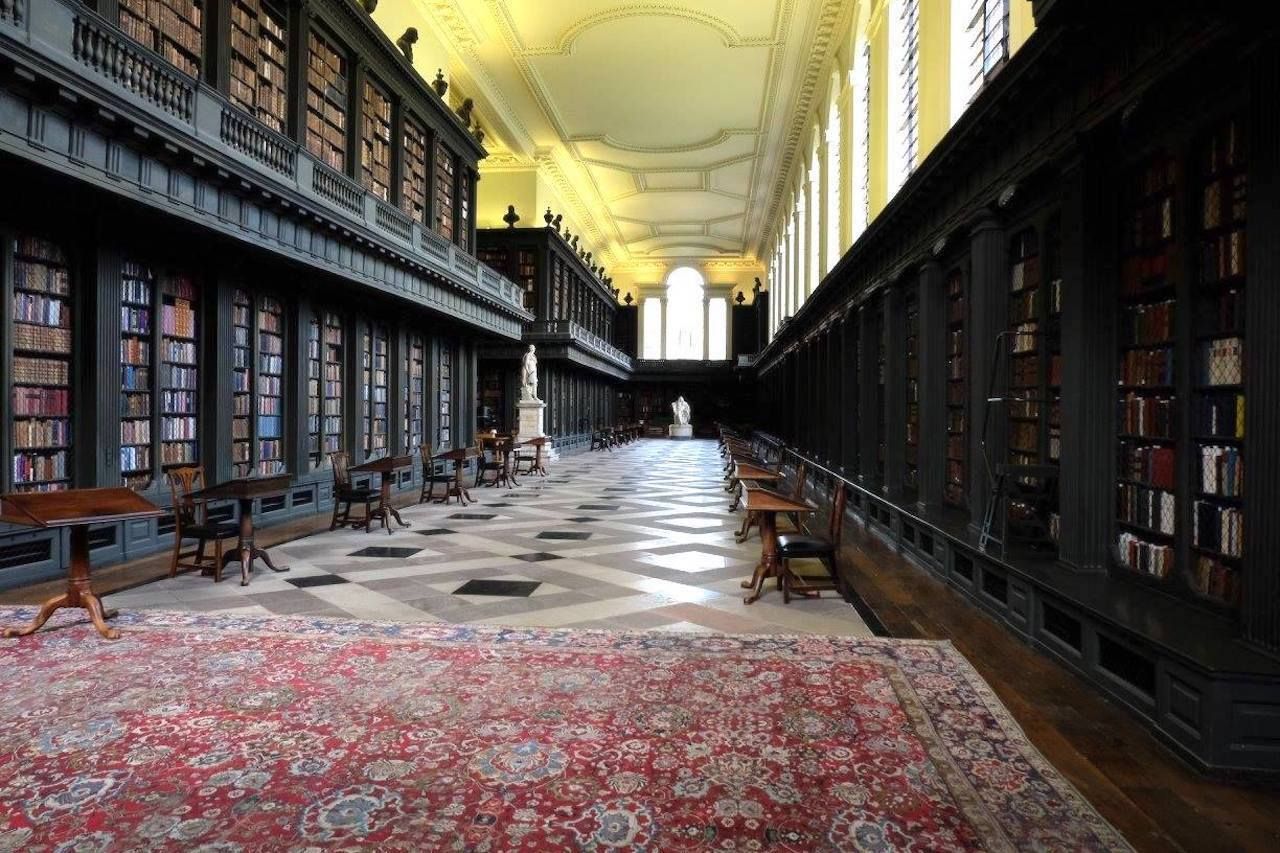 Oxford University is home to the largest library system in the UK, with over 100 libraries. Each of Oxford’s 45 colleges has at least one library, and they often reflect that college’s distinct character and history. For that reason, Codrington Library at All Souls College stands out. All Souls College is unique in that it has no undergraduate students. It’s Oxford’s most selective school, only admitting a select few graduate or postgraduate applicants each year through what is often called the “hardest exam in the world.” Because of this rigorous and selective process, only a handful of scholars study at the university and share its vast resources. 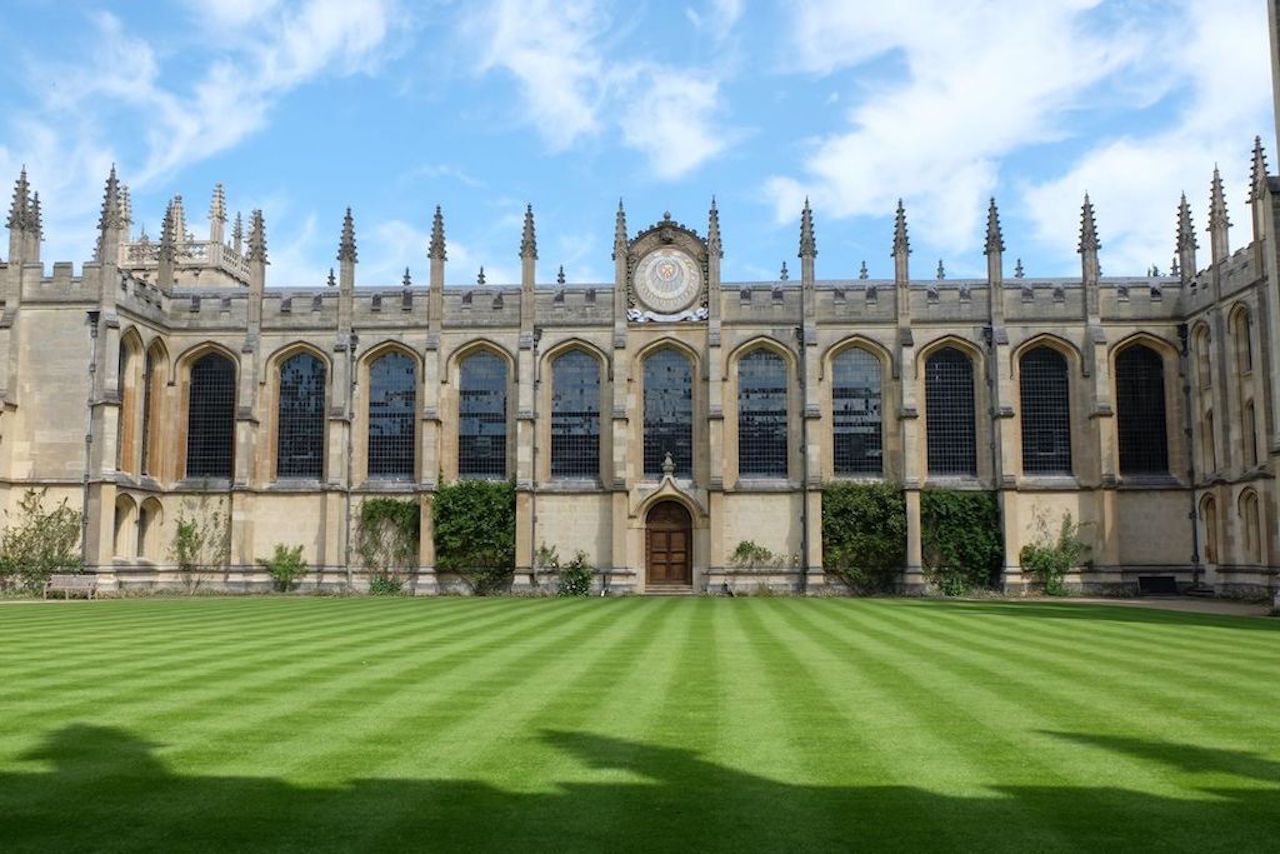 The Codrington Library was built between 1716 and 1720, with a gothic exterior matching the adjacent chapel. It started as a “gentleman’s reference library” with books on subjects like travel, classics, natural history, and letters. Now the library houses around 185,000 volumes, a third of which were printed before 1800. It also contains a number of historical artifacts like the personal memorabilia of archeologist T.E. Lawrence and a death mask of architect Christopher Wren. 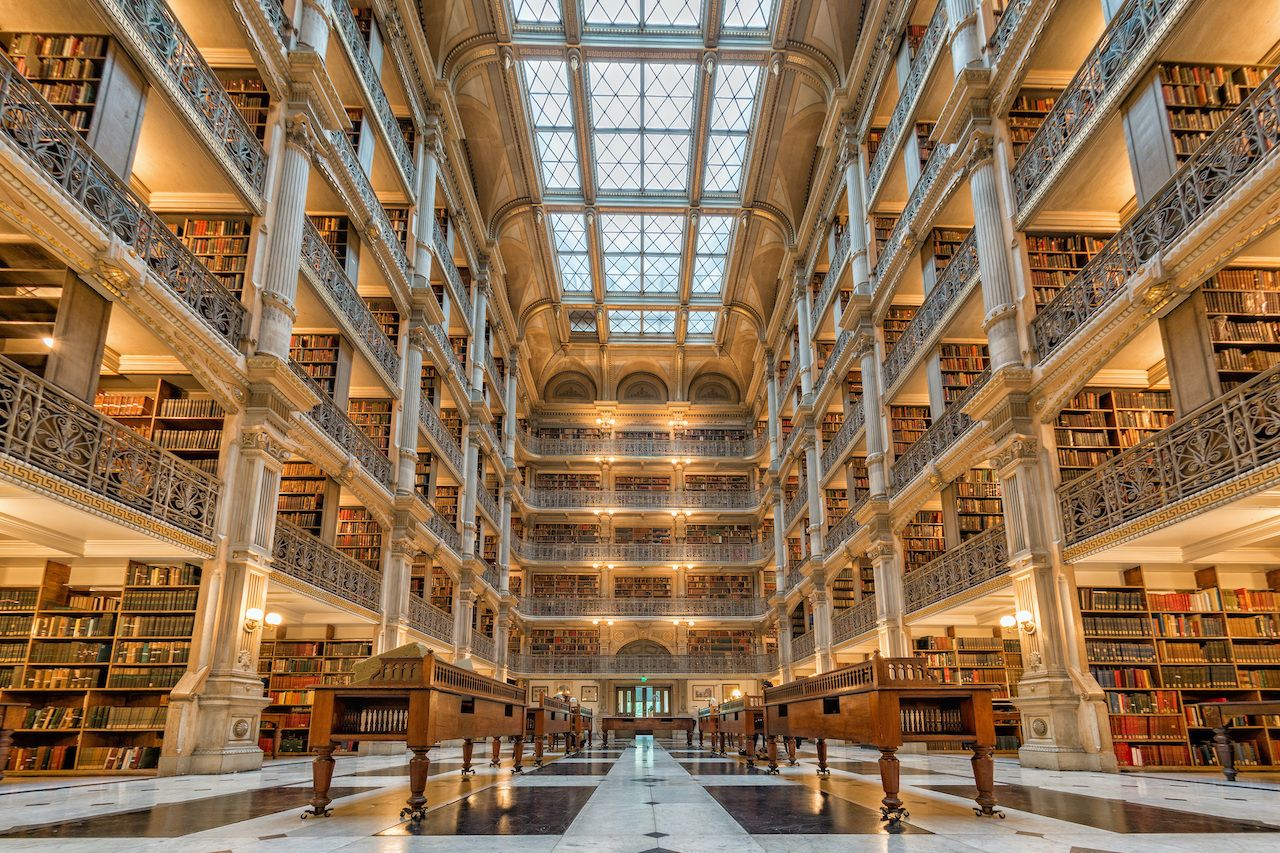 Often considered one of the most beautiful libraries in the United States, the Peabody Library, located on the Baltimore downtown campus of the Johns Hopkins University, was designed by architect Edmund G. Lind and opened in 1878. The main stack room contains five tiers of ornamental cast-iron balconies, reaching 61 feet all the way to the skylight. The neo-Greco interior has an atrium with gold columns and a black and white slab marble floor.

Many of the library’s 300,000 volumes date back to the 19th century, with a focus on religion, architecture, British art, and history. The library itself sits right across from Baltimore’s Washington Monument, so you can relax on the front steps with a good book and an even better view. 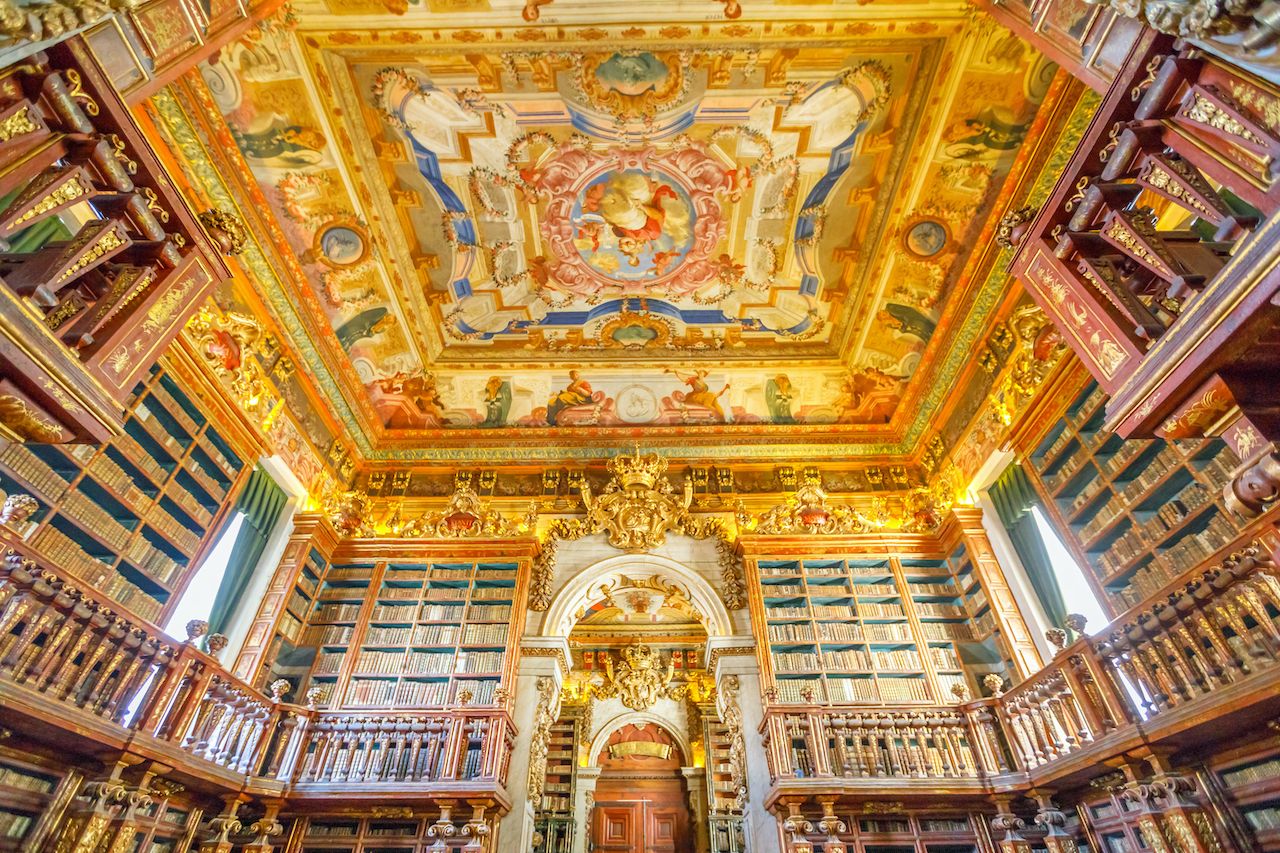 The library at Coimbra University was named for Leo V, Portugal’s “Sun King,” and it certainly reflects the opulence you’d expect from royalty. Biblioteca Joanina was built in the early 18th century with the wealth accumulated through Portugal’s imperial efforts and only houses books printed in the 19th century and earlier. 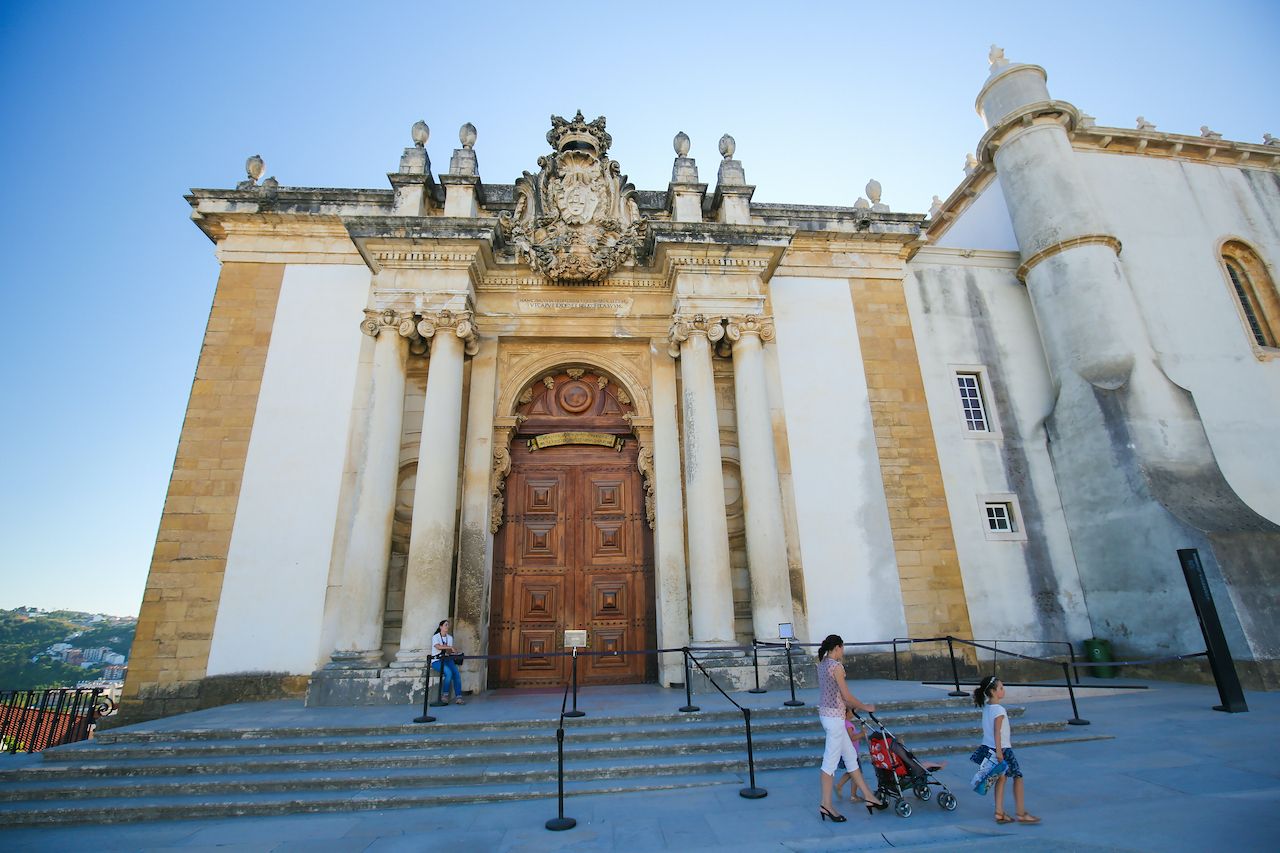 You could spend an entire day in this library without picking up a single book — there’s so much to look at. The baroque building is covered with fine architectural detail, including walls covered in gilded shelves and painted ceilings. There are around 250,000 volumes in total, most of which are in perfect condition due to the building’s carefully monitored environment and temperature. It was initially conceived as a vault of sorts, with thick walls designed to maintain stable temperatures and keep out insects that might damage the manuscripts. 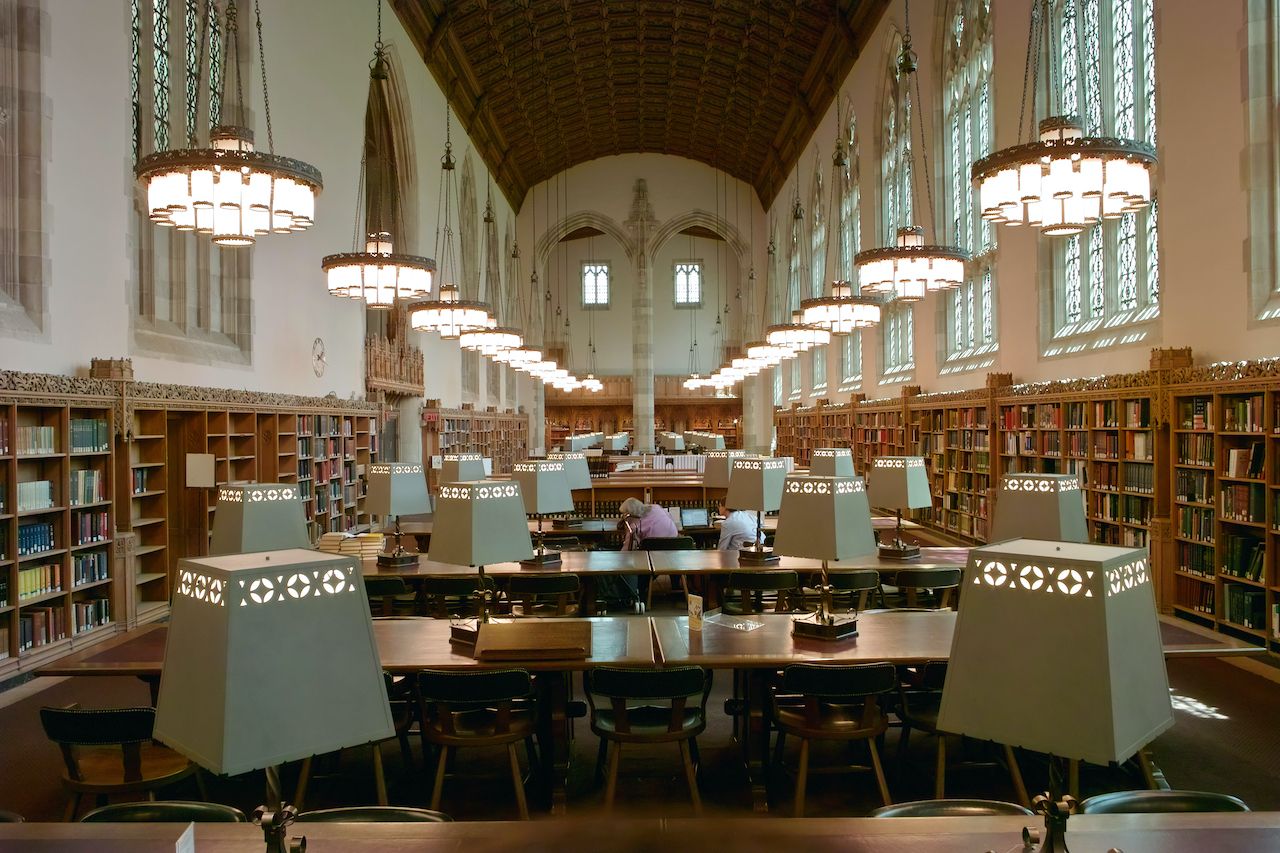 Yale’s Sterling Memorial Library, the largest of all the libraries in Yale, was designed by James Gamble Rogers and completed in 1930. The imposing structure was built in the gothic style and was meant to resemble a European church with beautiful stained windows throughout, 60-foot ceilings, and circulation desk altar. 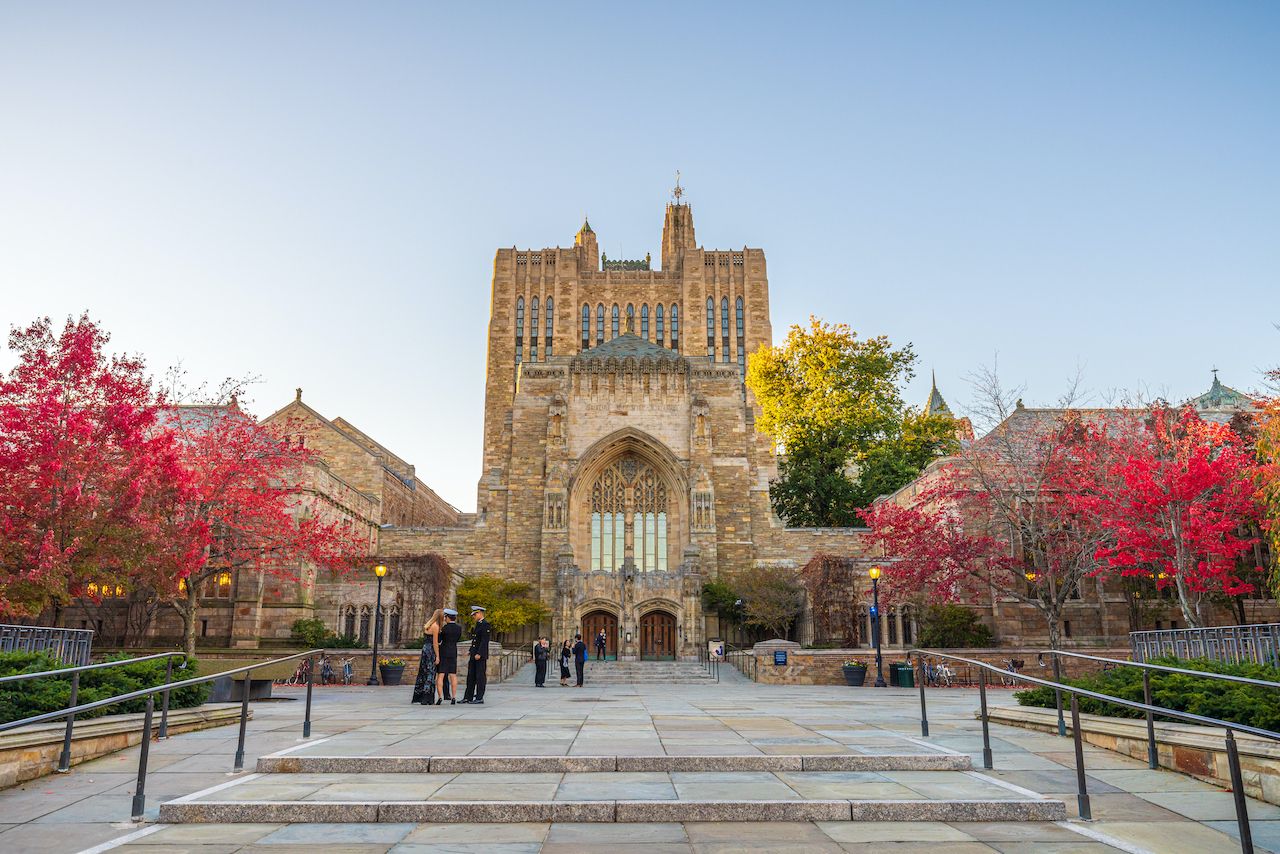 According to the library’s website, “every available wood, stone, and plaster surface, is carved a design that will remind the viewer of the dignity and significance of learning in general and of libraries in particular.”

Named the “best college library in the US” by The Princeton Review in 2015, the Sterling Memorial Library is more than just a pretty face. It contains separate collections dedicated to arts, classics, divinity, law, humanities, film study, and more, and currently contains around 2.5 million volumes on 16 floors of book stacks. 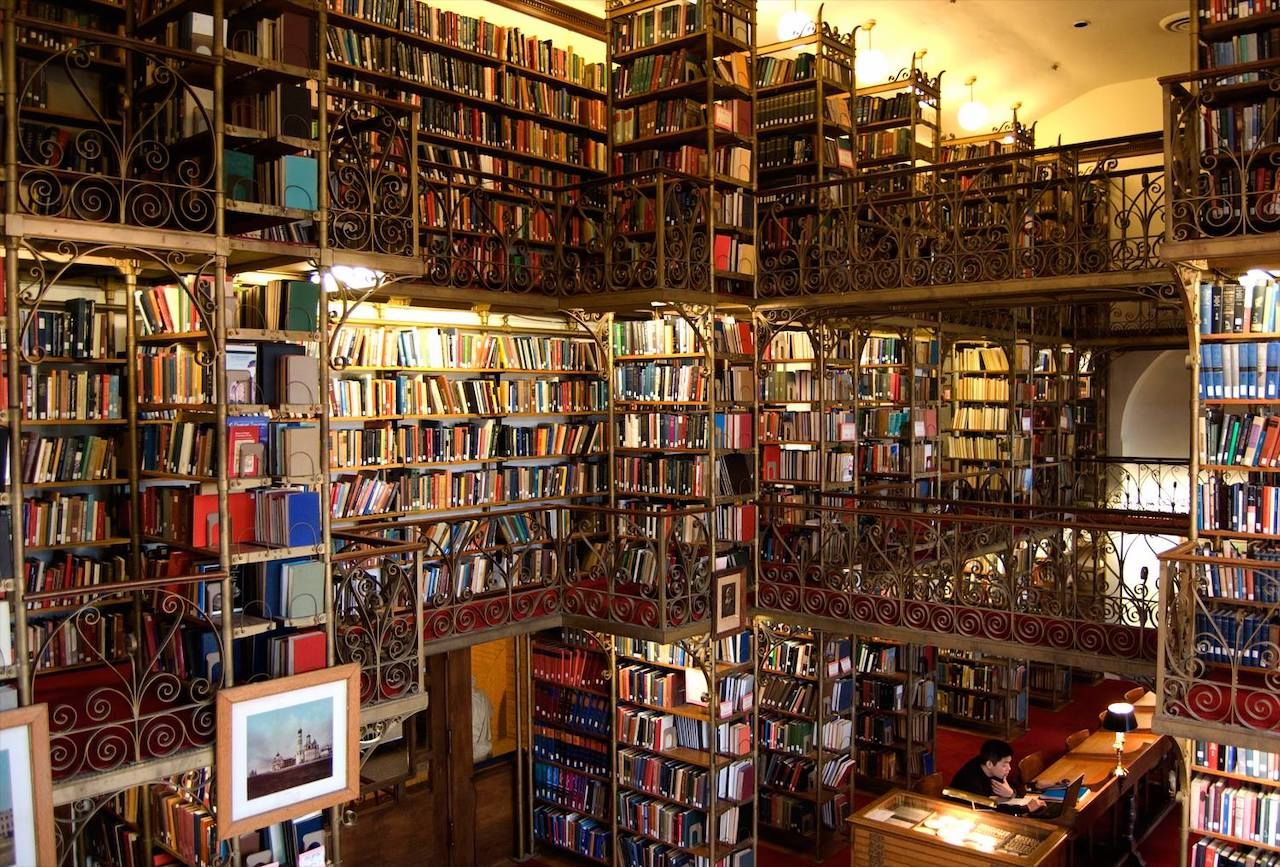 Located on top of the campus’ “Slope,” the Uris Library is an imposing sight — especially if your term paper is due tomorrow. Designed by William Henry Miller, Cornell’s first architecture student, it’s often praised for its combination of aesthetic beauty and practical utility. 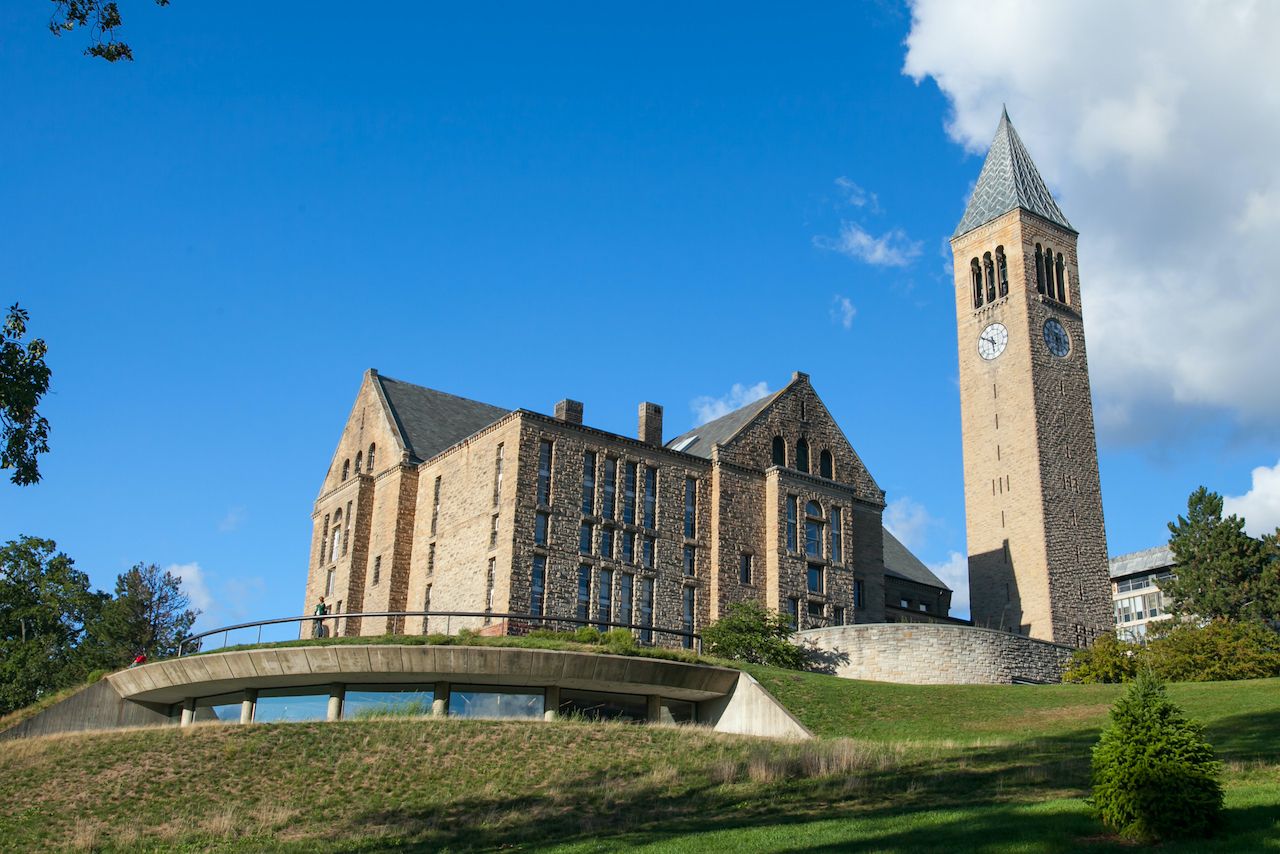 Its reading room is named after Andrew Dickinson White, the university’s first president, and is often called the “Harry Potter Library” due to its dark tones and eclectic collection of memorabilia. The library is filled with art, furniture, and artifacts from White’s academic and diplomatic careers, and wrought-iron balconies. 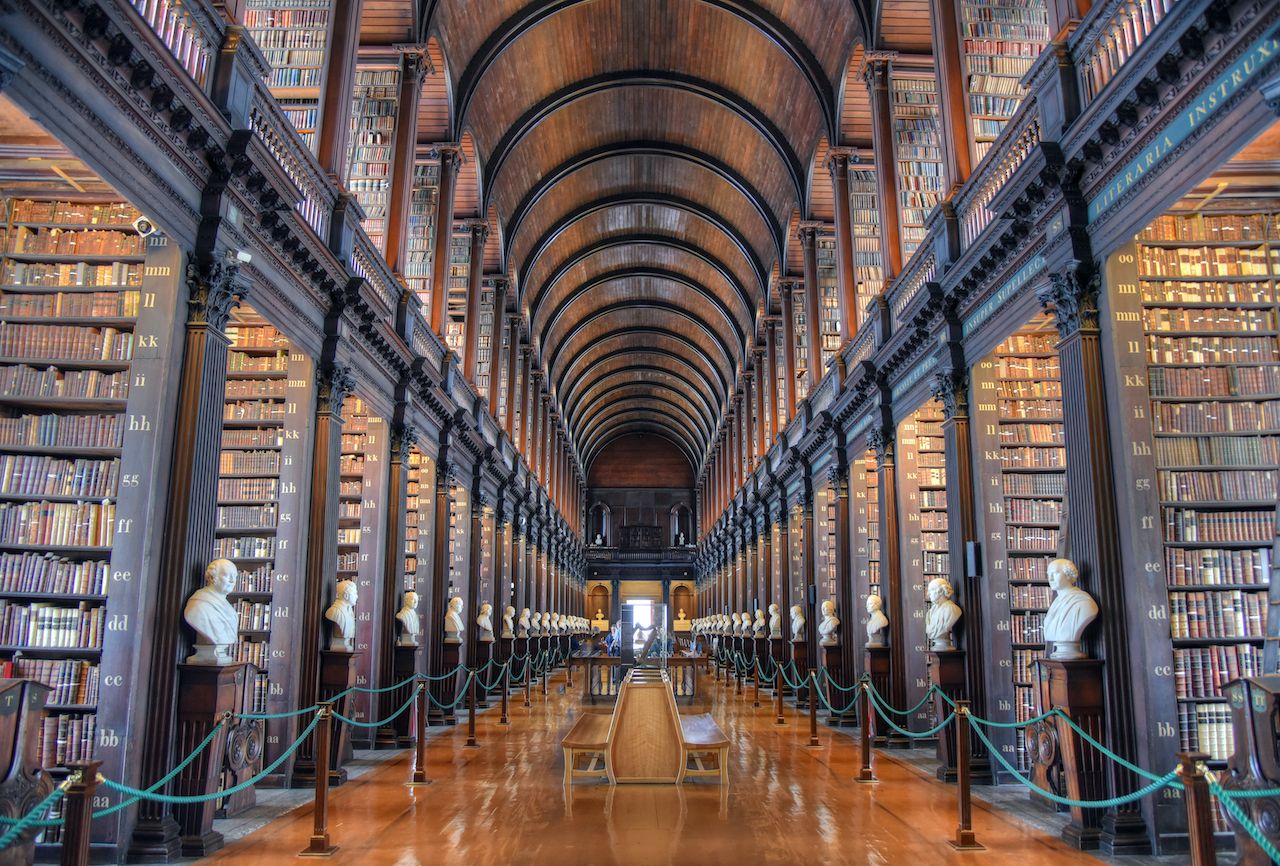 The Long Room of Trinity College’s Old Library might be the most famous spot on the entire campus. The ornate room is filled with oak bookcases containing 200,000 of the library’s oldest books, and it seems to stretch for miles under an arched ceiling. The library is also known internationally as the home of the Book of Kells, the ninth-century illuminated Gospel manuscript considered one of Ireland’s national treasures.

Unless you’re accompanied by a student, visiting the Old Library and the Book of Kells exhibition requires a fee, but it’s totally worth it. Also, don’t leave the college grounds without exploring the rest of the beautiful campus, which is conveniently located right in the heart of Dublin. 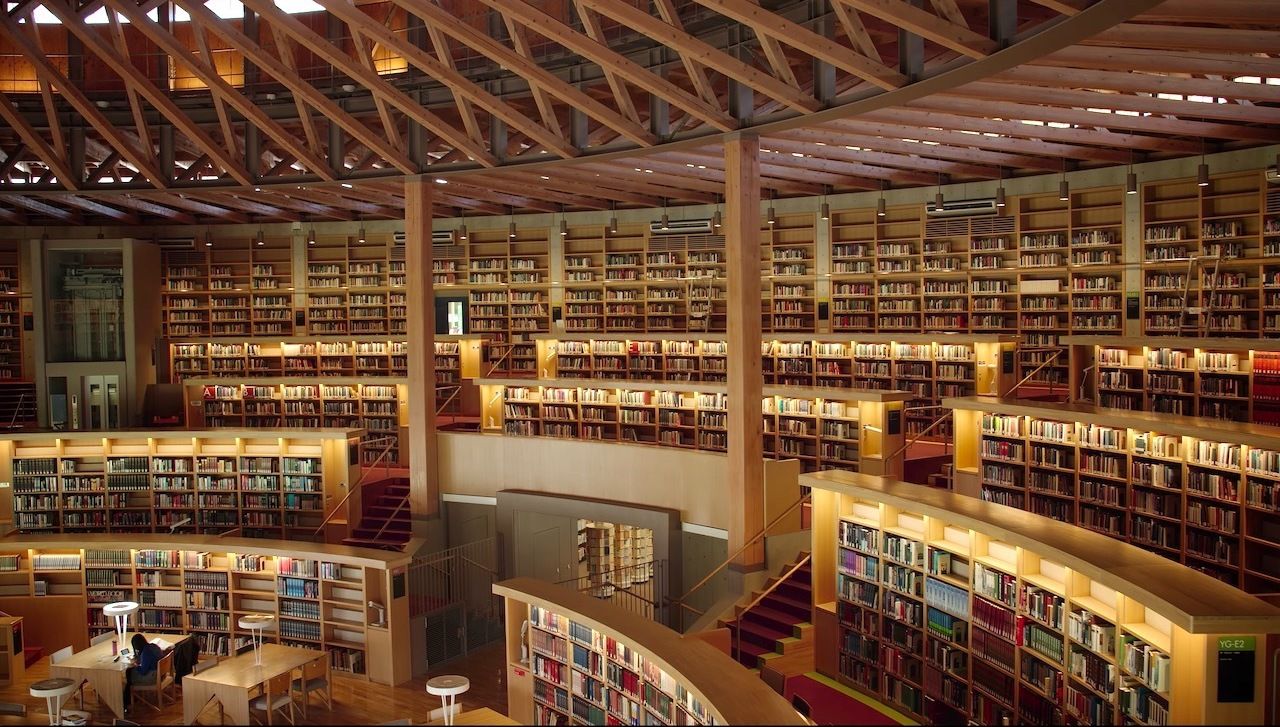 Eye-catching libraries don’t just belong to Europe and the United States. The Nakajima Library at Akita International University is one of the most beautiful libraries in Japan. Its defining feature is its semi-circular design that recalls the Roman Colosseum.

Built using ancient methods, the roof was constructed with local cedarwood and fans out in a dome pattern. Below, the collections themselves and the library’s common space are decidedly modern, blending contemporary technology and utility with traditional aesthetics. If you’re concerned that your lack of fluency in Japanese will present an issue, don’t worry — 60 percent of the library’s volumes are non-Japanese texts, making the library extremely well-suited to international visitors. 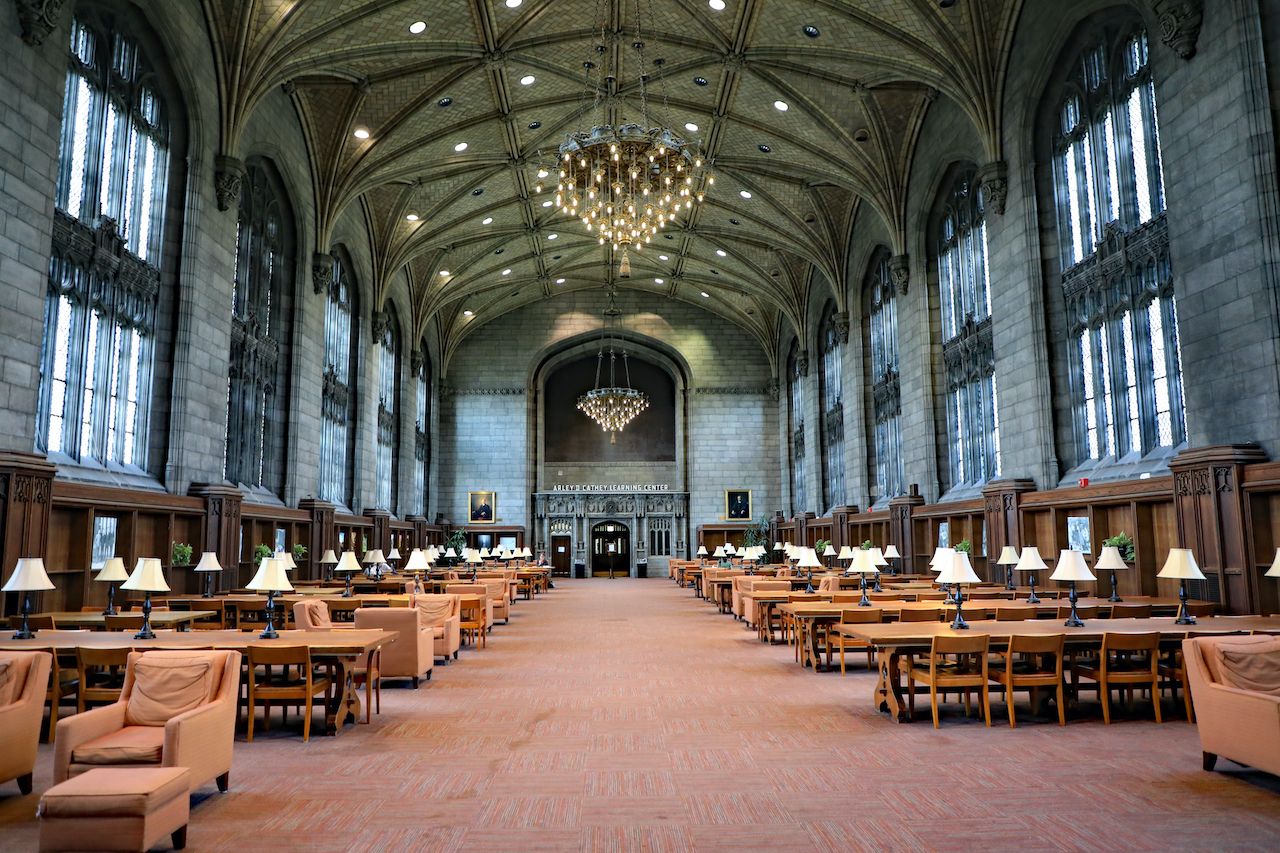 Founded in 1891 with 11.9 million volumes spread across six different sites, the William Rainey Harper Memorial Library is the 10th largest academic library in North America. The gothic-style building is probably the closest a US library can get to its European counterparts. Inspired by King’s College Chapel at Cambridge and Magdalen College and Christ Church College at Oxford, the library truly looks like a haven dedicated to the pursuit of knowledge. To further the link between the old and new worlds, and solidify its relationship to some of the world’s most prestigious institutions, the library also features stone carvings of the coat of arms of Oxford, Cambridge, Harvard, Yale, Stanford, and others. 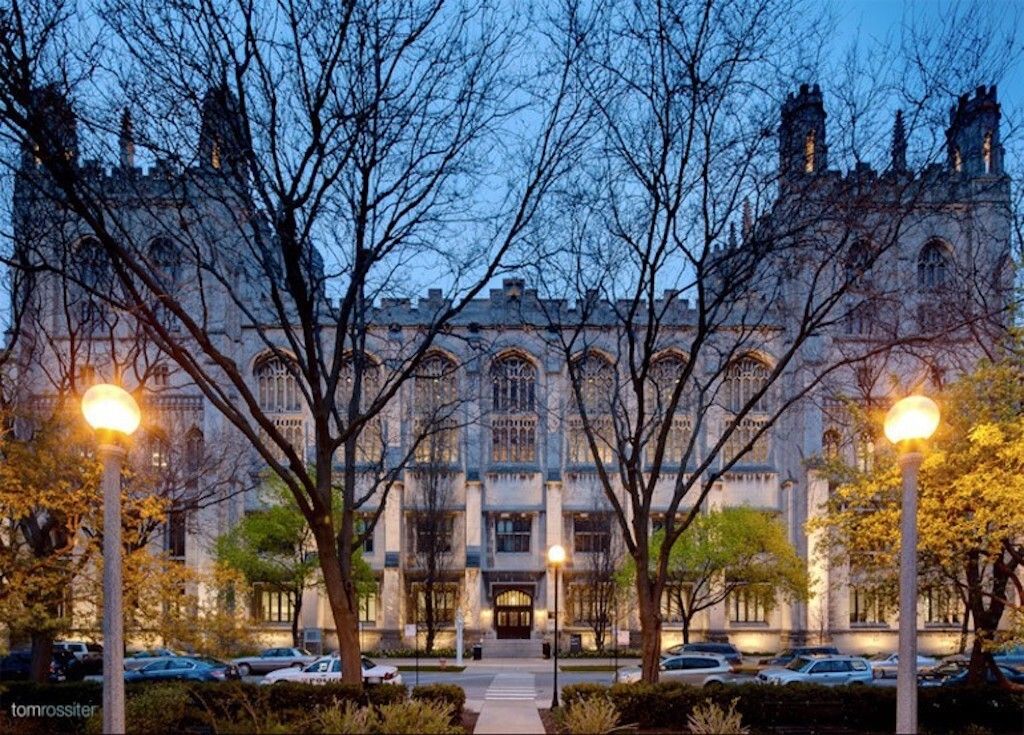 Its defining room is the Arley D. Cathey Learning Center, with vaulted ceilings and massive chandeliers that recall the Great Hall of Hogwarts. Its castle-like towers enhance the air of opulence, with the west tower’s battlements representing the secular state, and the east tower — modeled after those of Christ Church, Oxford — symbolizing the ecclesiastical.