Gazing upon a body of water is scientifically proven to relieve stress. When that body of water is surrounded by the quiet and shining whiteness of winter, the scene is somehow even more serene. Some lakes may be too big to freeze while others — given their northerly locations on the planet — may freeze despite their large size. Whether turquoise waters surrounded by snowy mountain peaks in Italy or an immense frozen lake in Siberia, these are some of the world’s most beautiful lakes in winter.

1. The lakes of El Chalten, Argentina 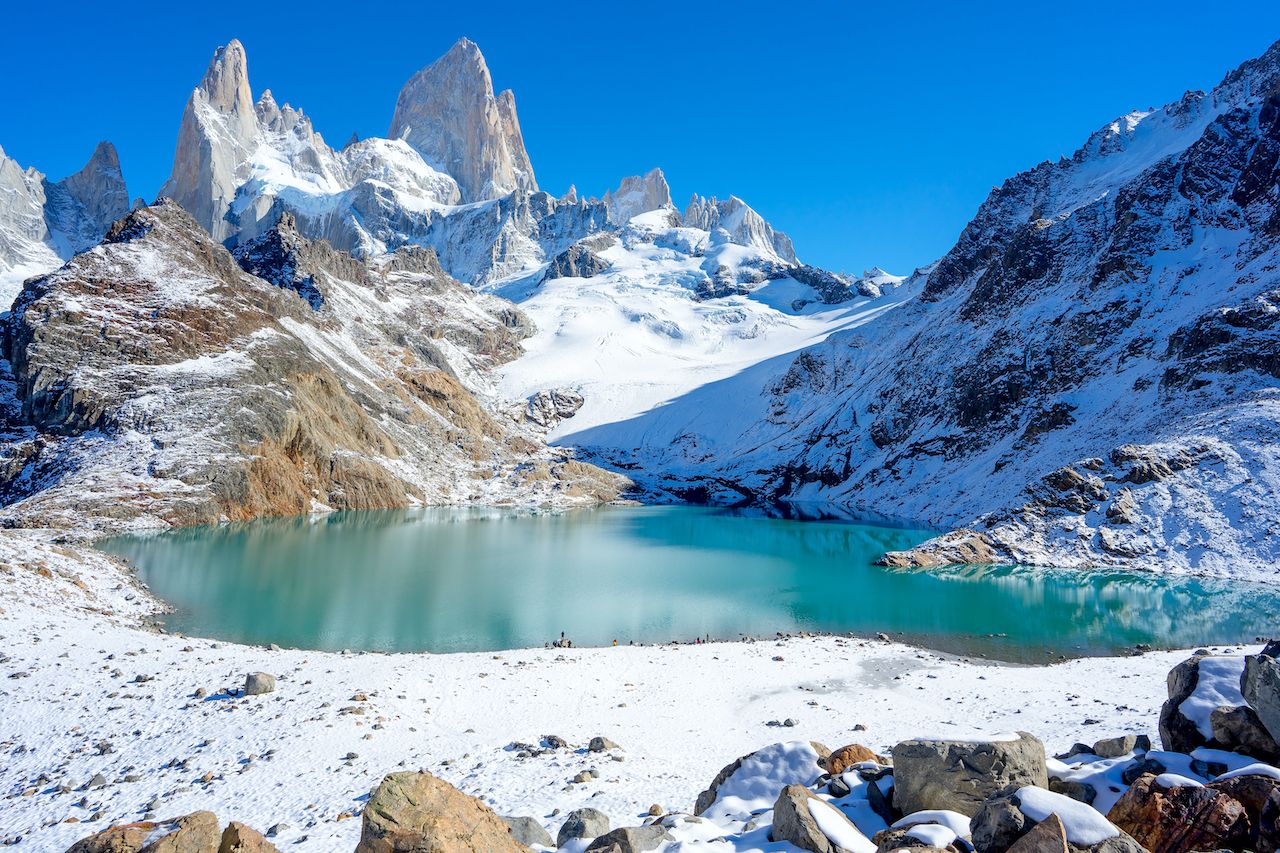 The Fitz Roy Trek on the Argentine side of Patagonia is just one of the treks that leads to the beautiful El Chalten, where milky green-blue waters tinted from the minerals in glacial runoff contrast with the peaks. The result is a scene so stunning it almost looks like a dream. Remember that winter here is summer in the Northern Hemisphere, so you have some time to get your training in for this type of grueling mid-winter hike. The reality is that hiking here in winter requires a lot of experience, but appreciating its beauty does not require much effort at all. 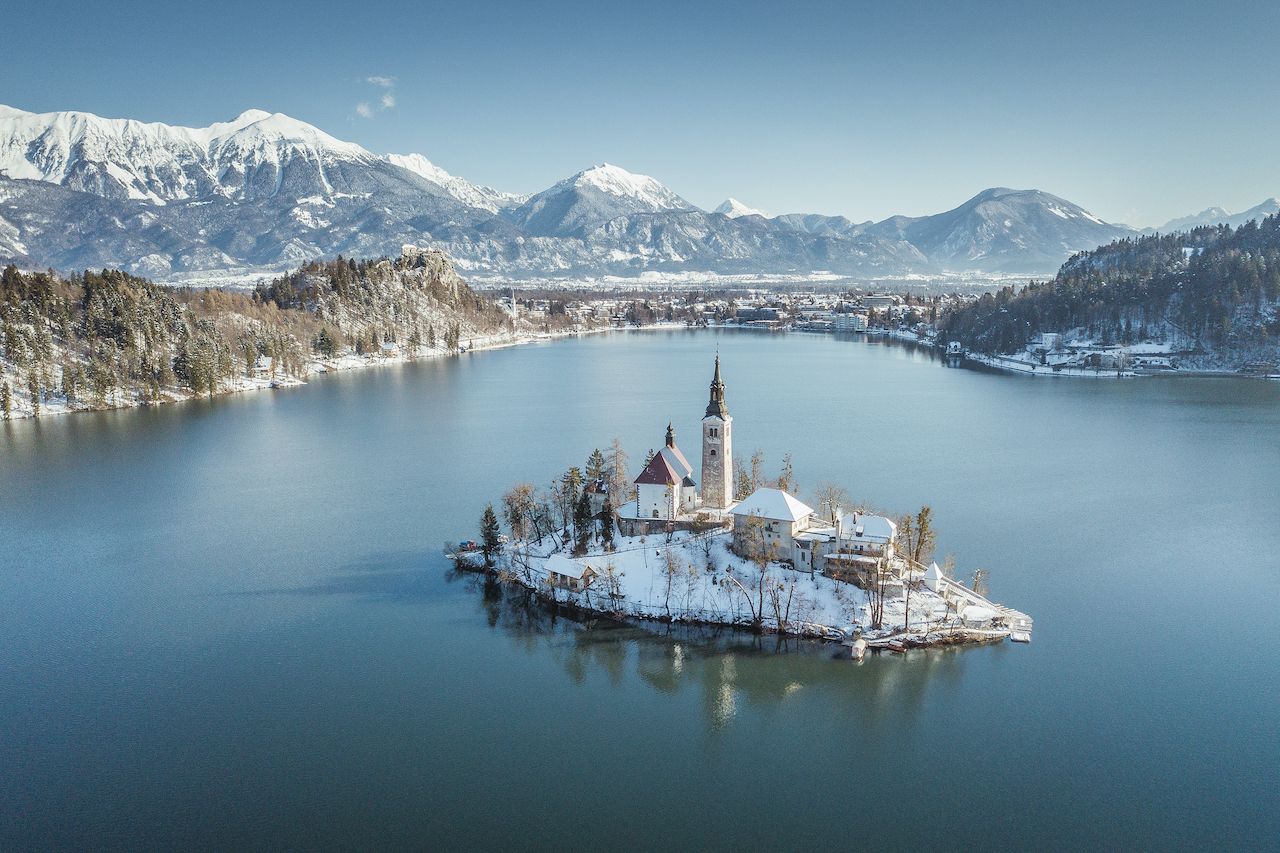 Slovenia’s Lake Bled is the most photographed lake in a country filled with beautiful lakes — and for good reason. Winter, though, offers a chance to gaze on the lake when far fewer people are present and when the white of snow adds an ethereal touch to what is already one of Europe’s most photogenic bodies of water. The spires of the Pilgrimage Church of the Assumption of Maria tower over Lake Bled in Transylvania, creating a stark contrast to the cold waters below and the Slovenian Alps in the background. The scene is at once natural and historic, conjuring the beauty of both Gothic-era architecture and the Eastern European high country. 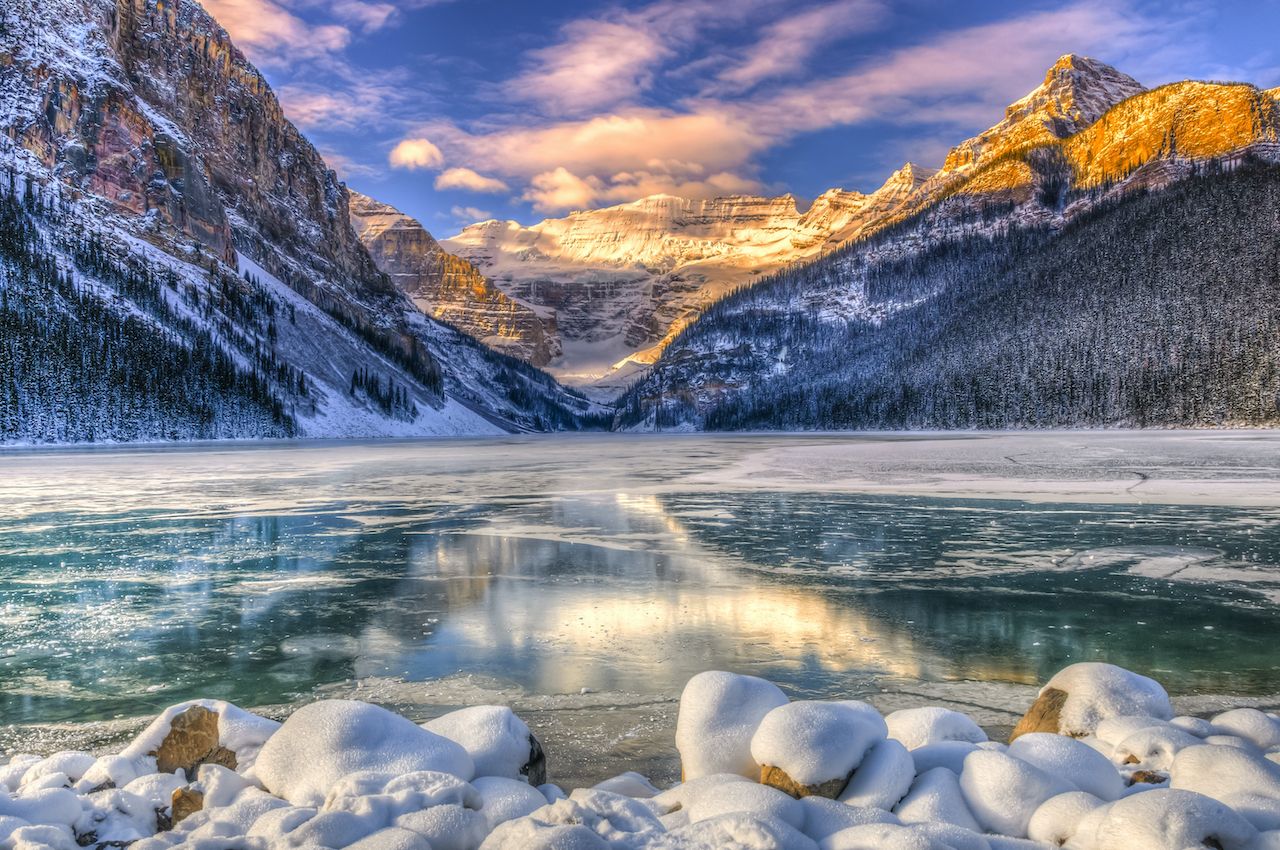 Some 3.6 million visitors travel to Banff, Canada, and Lake Louise each year. Most, however, never see this high-altitude lake in its snow-clad prime, as the vast majority of the visitors come in summer. In winter, when Lake Louise is frozen solid, gazing upon it from its center is the best way to feel as though you’re inside a snow globe. You can gaze upon it while sipping a hot toddy lakeside at the Fairmont Chateau Lake Louise, slice over it on ice skates or even while trying your hand at ice hockey, sign up for a round of Bavarian Curling on the ice, take a sleigh ride around it, or snowshoe the forested hills above. 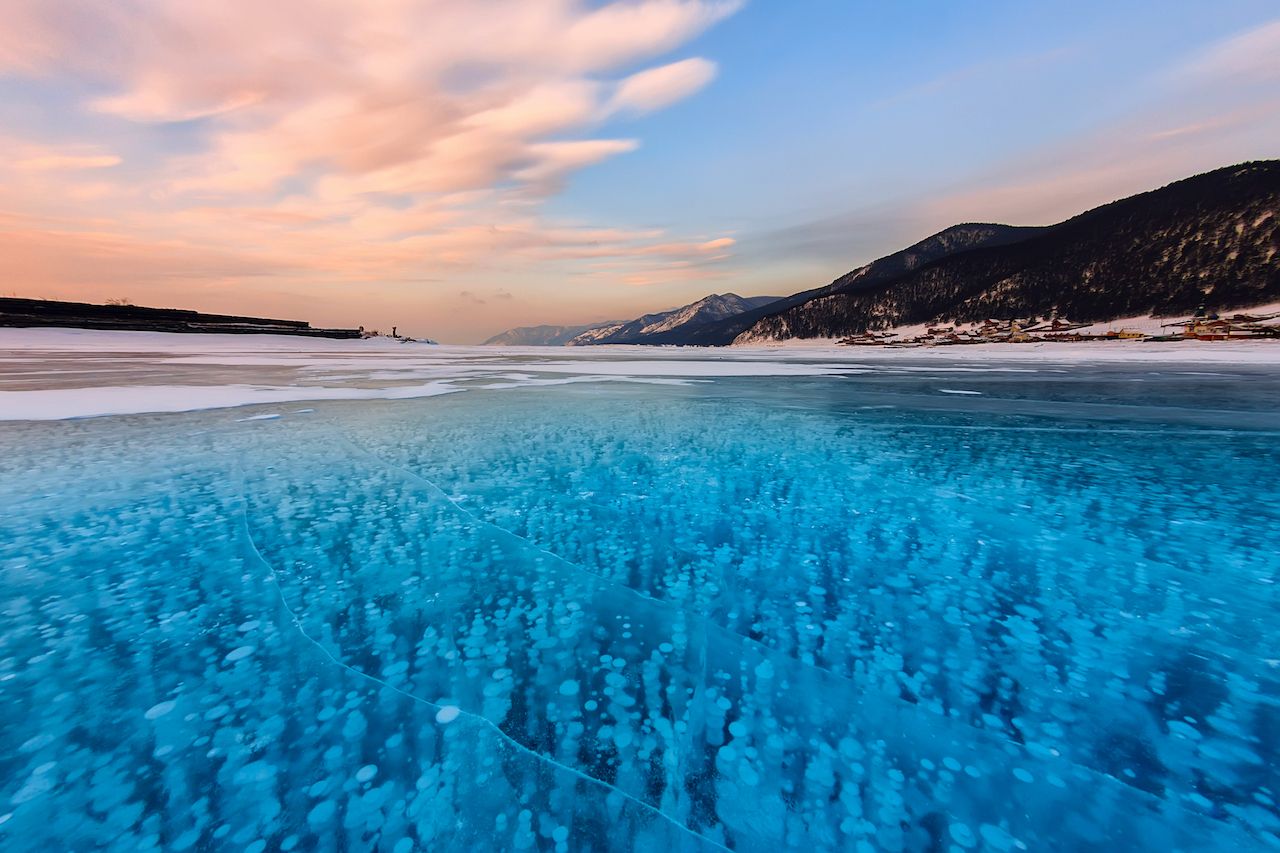 Russia’s Lake Baikal is already one of the most stunning lakes to ice skate on in winter, yet it also offers a beauty that few others do in winter: frozen bubbles. Methane bubbles, a result of this being a rift lake, rushing up from below are captured in time as the lake freezes. Elsewhere on Lake Baikal are caves lined with frozen stalactites, approachable from the inside when the ice has frozen solid enough. 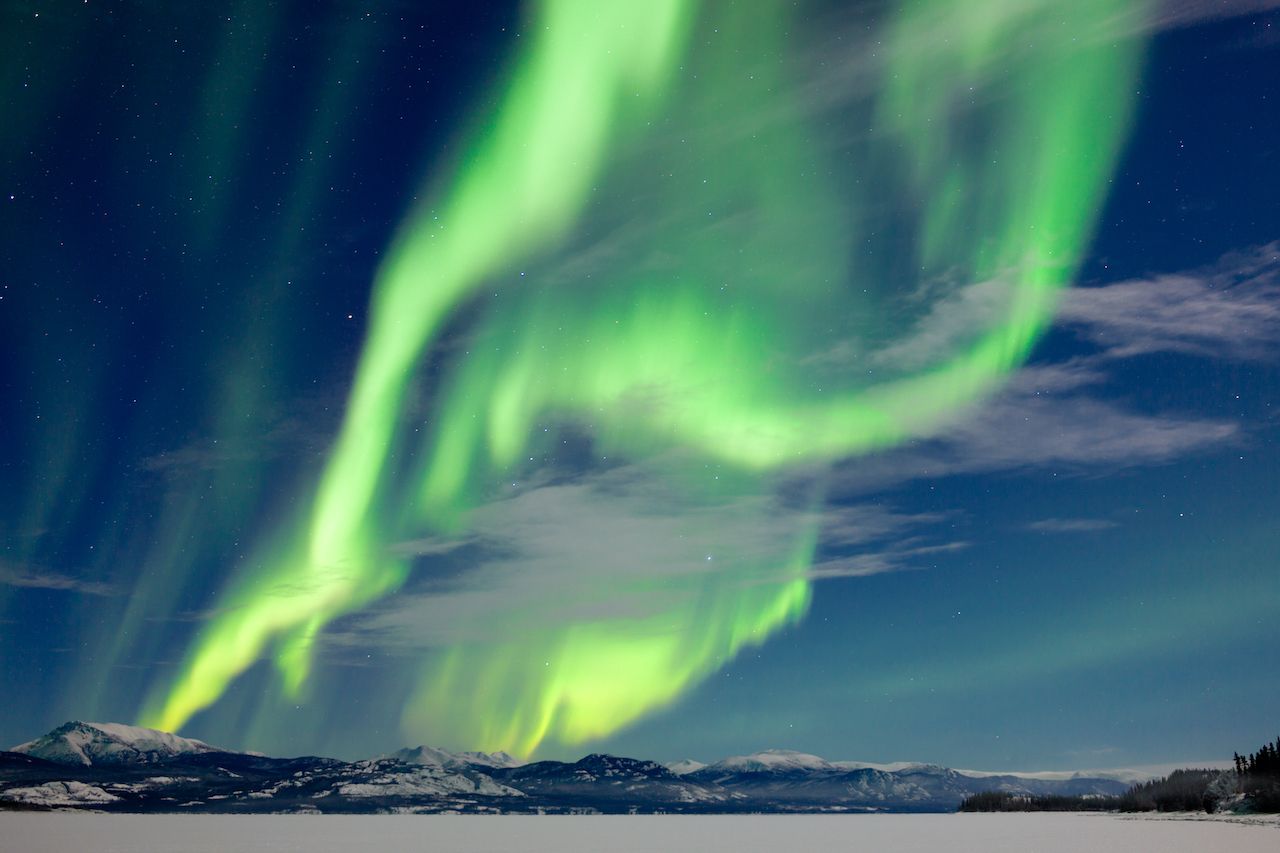 No single phenomenon accentuates a frozen lake quite like the northern lights. Yukon’s Lake Laberge is proof when the green hues of the aurora borealis trail the Canadian north and reflect off its icy waters. You’ll have plenty of opportunities to see them here in winter, since in late December the sun is only above the horizon for five-plus hours a day. A check on the aurora forecast will let you know the likelihood of solar activity on any given night. When the time is right and you are at the lakeshore, all you have to do is gaze up. The colors bounce off the lake and dance in a performance that will easily take your breath away. 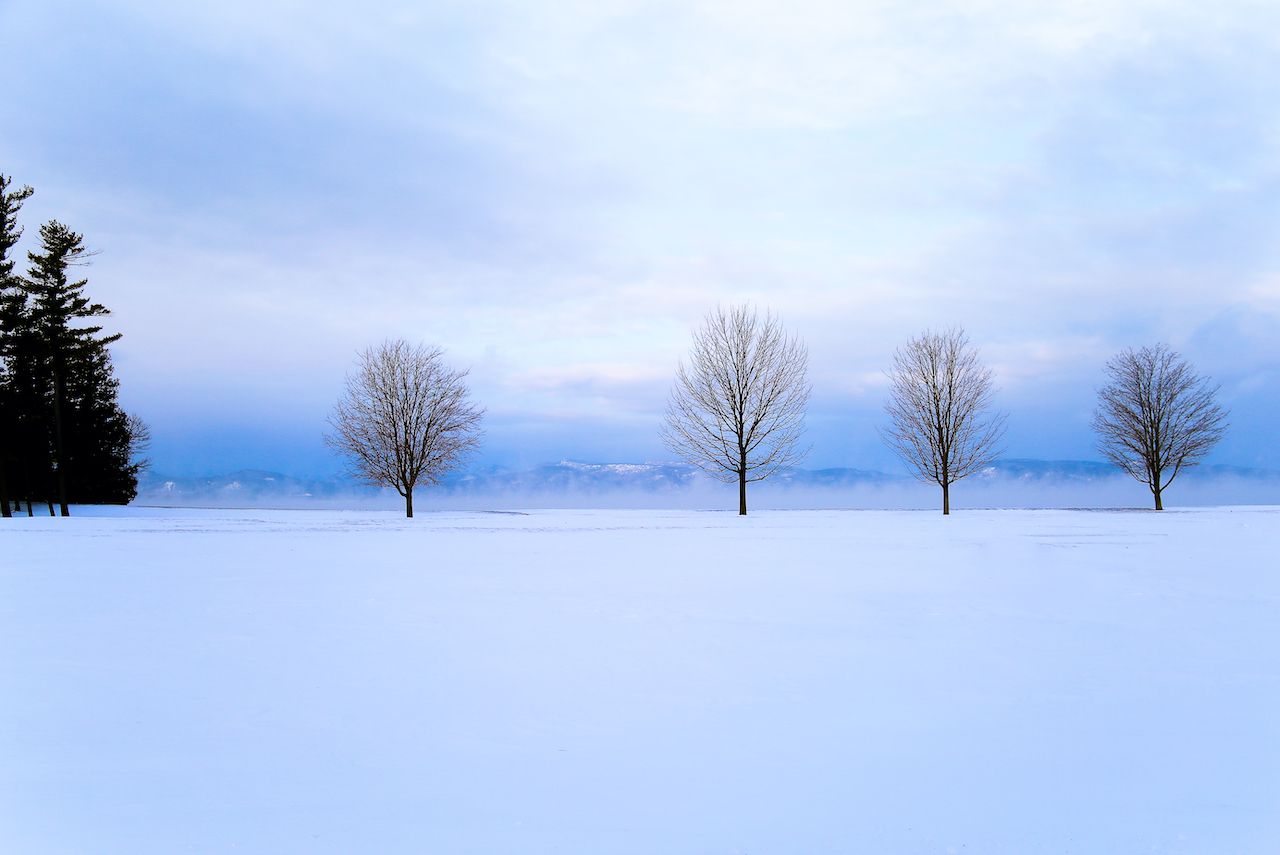 Stroll the paved lakeside trail in downtown Burlington, Vermont, in the cold of winter and you might find yourself with a strained neck. That’s because though the trail runs north-south, you’ll spend the entire time staring west. The snow-covered hills of New York rim the horizon, while within a stone’s throw lie smooth chunks of scattered ice barely distinguishable from the wave breakers rippling toward them. After a fresh snowstorm in the dead of winter, the lake is frozen solid and covered with snow, rendering your view an endless vista of winter whiteness. 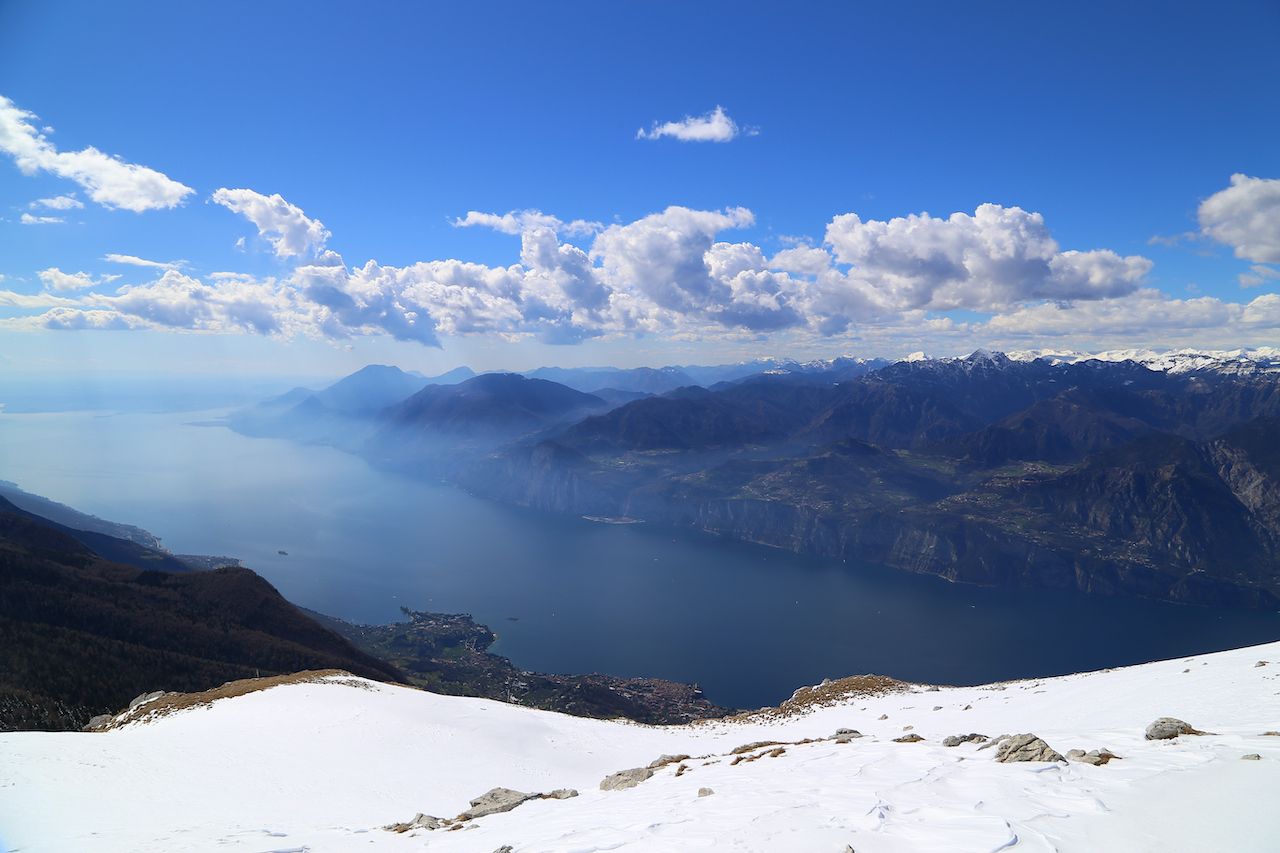 In northern Italy, almost halfway between the cities of Milan and Venice lies Lake Garda, a 143-square-mile expanse surrounded by alpine peaks. A lake this big won’t freeze in winter, and the famously turquoise water keeps its vibrant hue on sunny days and turns a more steely color when it gets cloudy. You can gaze at its beauty from the hillside in the town of Bardolino, or you can view the lake and the snowline above it from Sirmione on the lake’s southern tip. Better yet, make a unique day or weekend trip out of it by driving around the lake, stopping in picturesque villages along the way for antipasti and a glass of spicy yet light red wine made with the local Bardolino varietal. On your journey, check out the humble yet beautiful Church of San Pietro in Mavino and the grand Church of Santa Maria Maggiore in Sirmione.

National ParksThe 7 Most Beautiful Lake Vacations To Take This Winter
Tagged
National Parks
What did you think of this story?
Meh
Good
Awesome