Skating out in the clean, crisp winter air surrounded by trees or mountains is a unique feeling. A far cry from the crowds and Christmas-carol soundtrack of an urban ice rink, gliding silently over the surface of a vast frozen lake is exhilarating. From Canada to Switzerland, winter transforms already stunning lakes into the world’s most spectacular natural skating surfaces. Whether in far-flung pockets of Alaskan wilderness or big cities like Stockholm, these frozen lakes all turn a simple winter sport into an enchanting commune with nature. 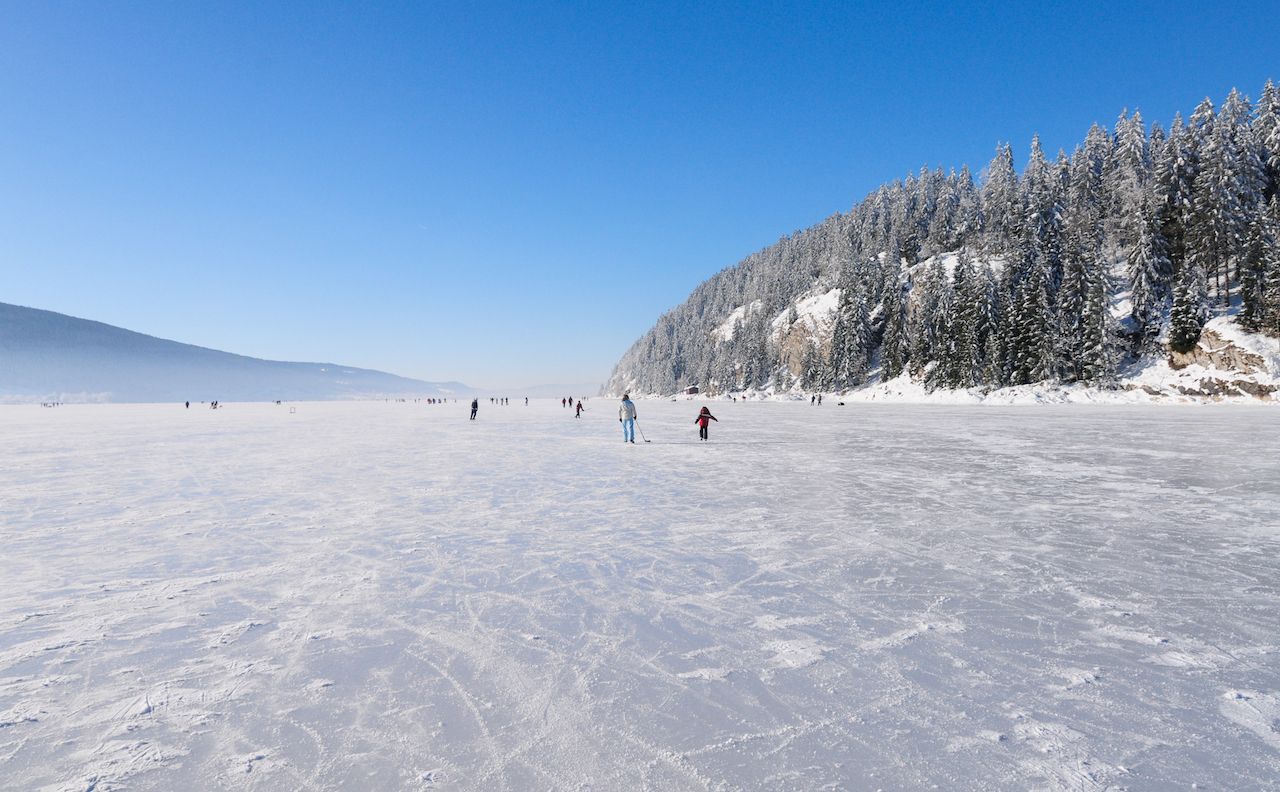 The Jura Region lies in a 190-mile arc of limestone hills along the border of France and Switzerland. In the steep Vallée de Joux, at an altitude of almost 3,300 feet, is Lac de Joux, an enormous alpine lake, which during the colder months becomes the largest natural ice skating rink in Europe.

Ringed by barren alpine forest, the lake’s surroundings possess a stark, frost-tinged beauty. Even when large numbers of visitors descend on the Jura Mountains in the peak months of February and March, the sheer vastness of the lake means speed skating in the wide open of Lac de Joux is nothing short of thrilling. 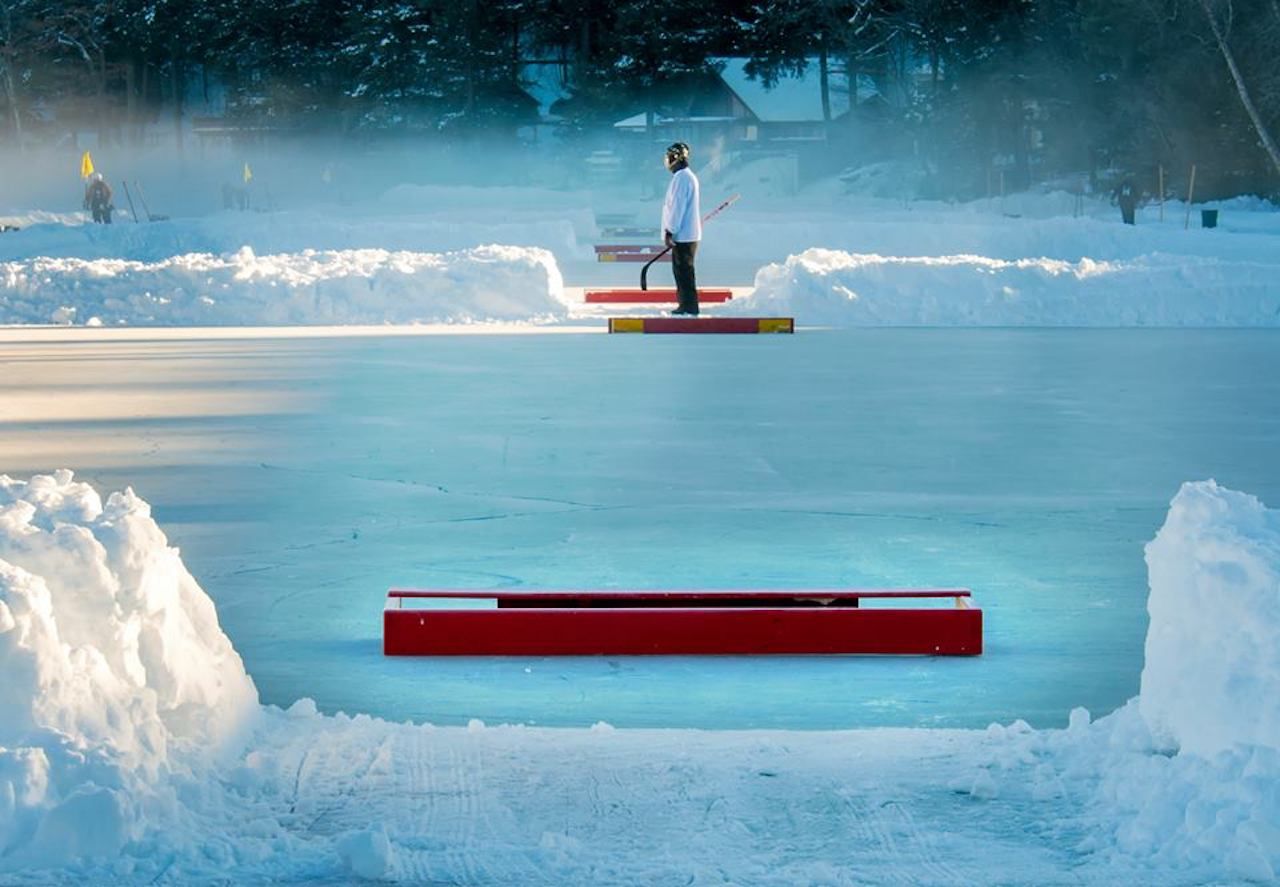 Skating the entire length of Lake Morey’s frozen perimeter is a full-on, 4.5-mile expedition. Strap on a pair of Nordic skates (a Scandinavian invention that’s basically a cross-country ski boot with long blades attached to the bottom, ideal for traveling over uneven or snowy ground) and take on the longest Nordic skating trail in the United States. The path skirts along the edge of a dense birch, pine, and maple forest. Look out for the resident bald eagles, easily spotted perched in the bare branches over winter.

Lake Morey Resort maintains the trails and also offers Nordic skates for rent, as well as lessons for beginners. The resort also brings a Zamboni (the ice resurfacers used in hockey rinks and indoor skating areas) out to the lake to prep several outdoor “rinks” ahead of mid-winter ice hockey tournaments. 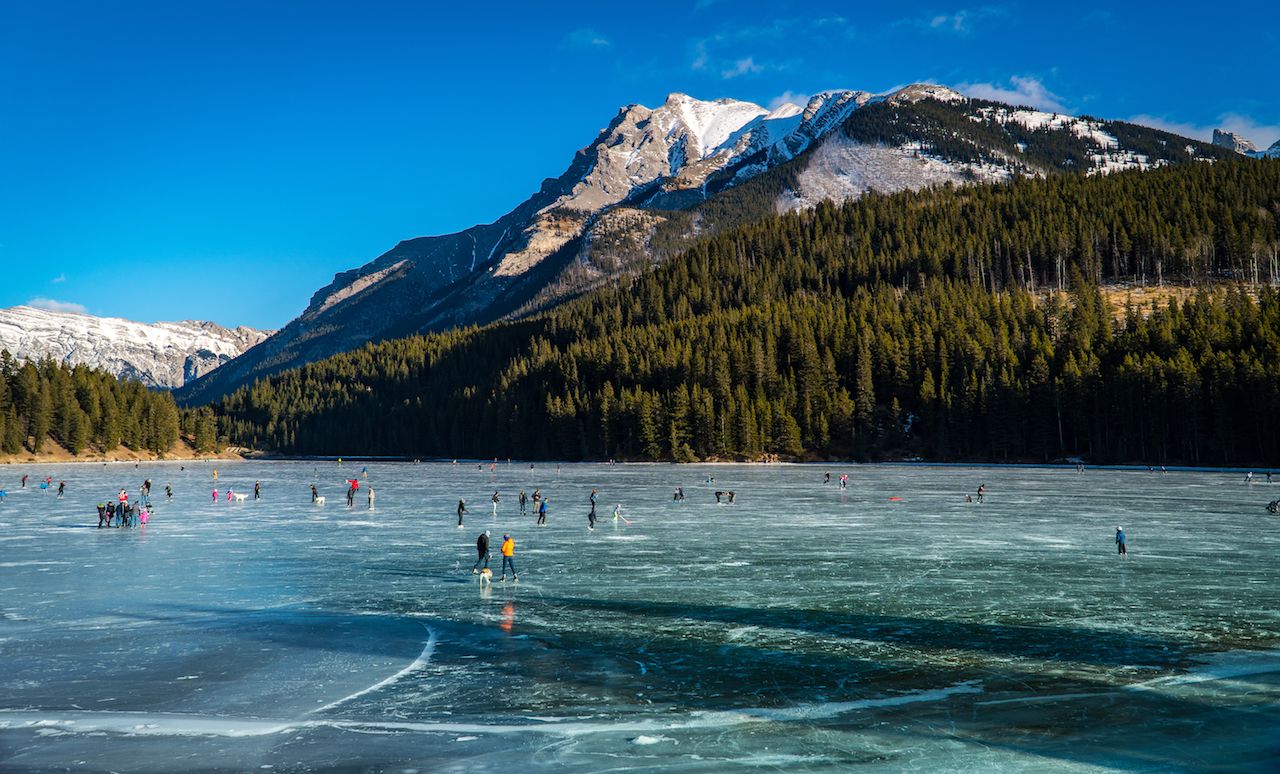 Set beneath the rugged, snow-capped peaks of the Canadian Rocky Mountains, with the magnificent Victoria Glacier looming large in the distance, Lake Louise is one of the most picturesque places in a park with no shortage of world-class natural attractions.

A popular spot for all kinds of winter activities, from December to mid-April, Lake Louise is maintained by the Fairmont Chateau hotel’s ground crew, which helps ensure the lake surface is safe for visitors to venture out on. You can also rent ice skates right by the lake. For a truly serene experience, dance across the ice after dark when most of the tourists have retreated to the warmth of the Fairmont Chateau fireside. 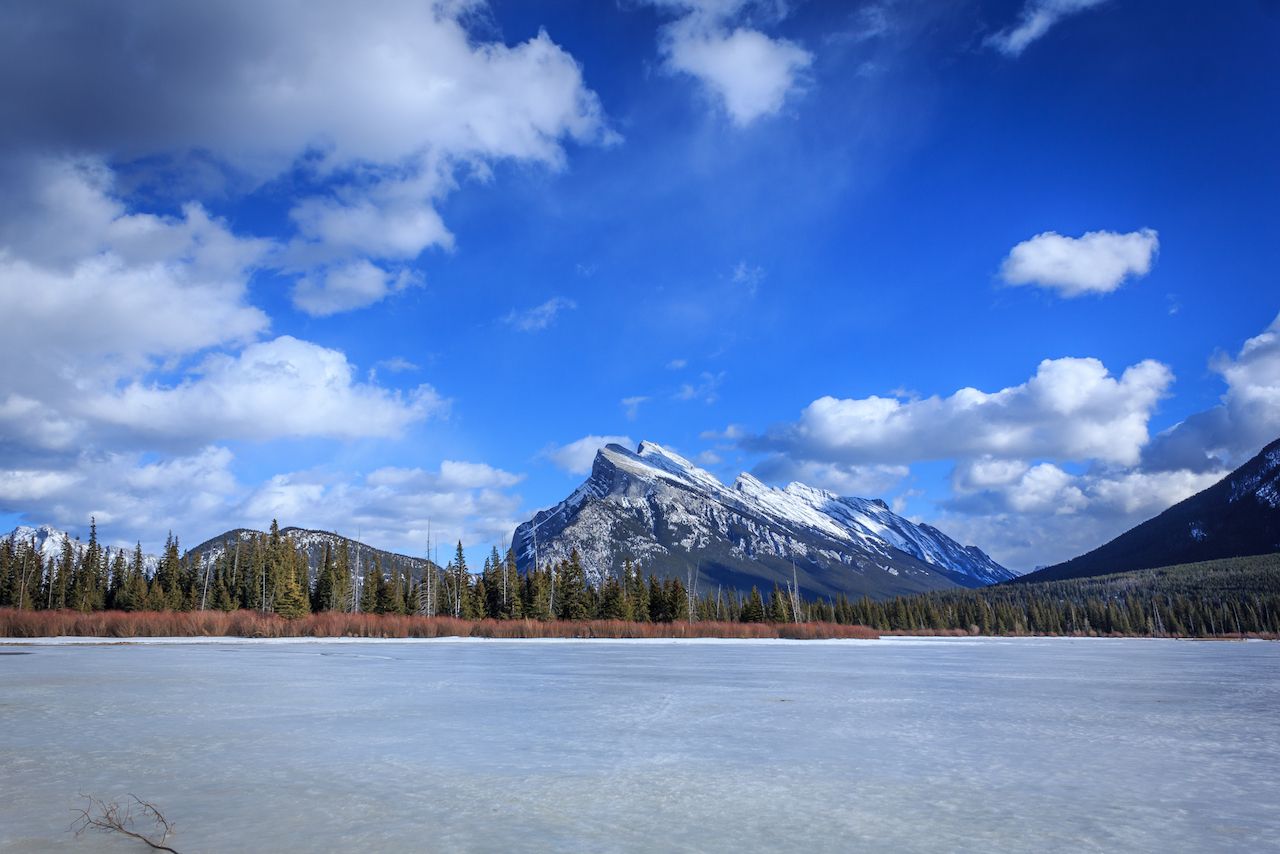 This chain of lakes just west of Banff is renowned for breathtaking sunrises and sunsets, and it’s a haven for hikers and photographers during the summer months. In winter, though, the lakes are a peaceful alternative to the bustling holiday hub of Lake Louise.

Against a panoramic backdrop of craggy mountain peaks, skaters can expect to have the three lakes almost entirely to themselves. While it’s imperative that you test the depth and strength of the ice first, it’s reassuring to know that the water is little more than knee-deep in most parts, should you suddenly find yourself in the unenviable situation of seeing the surface starting to split apart underneath you. 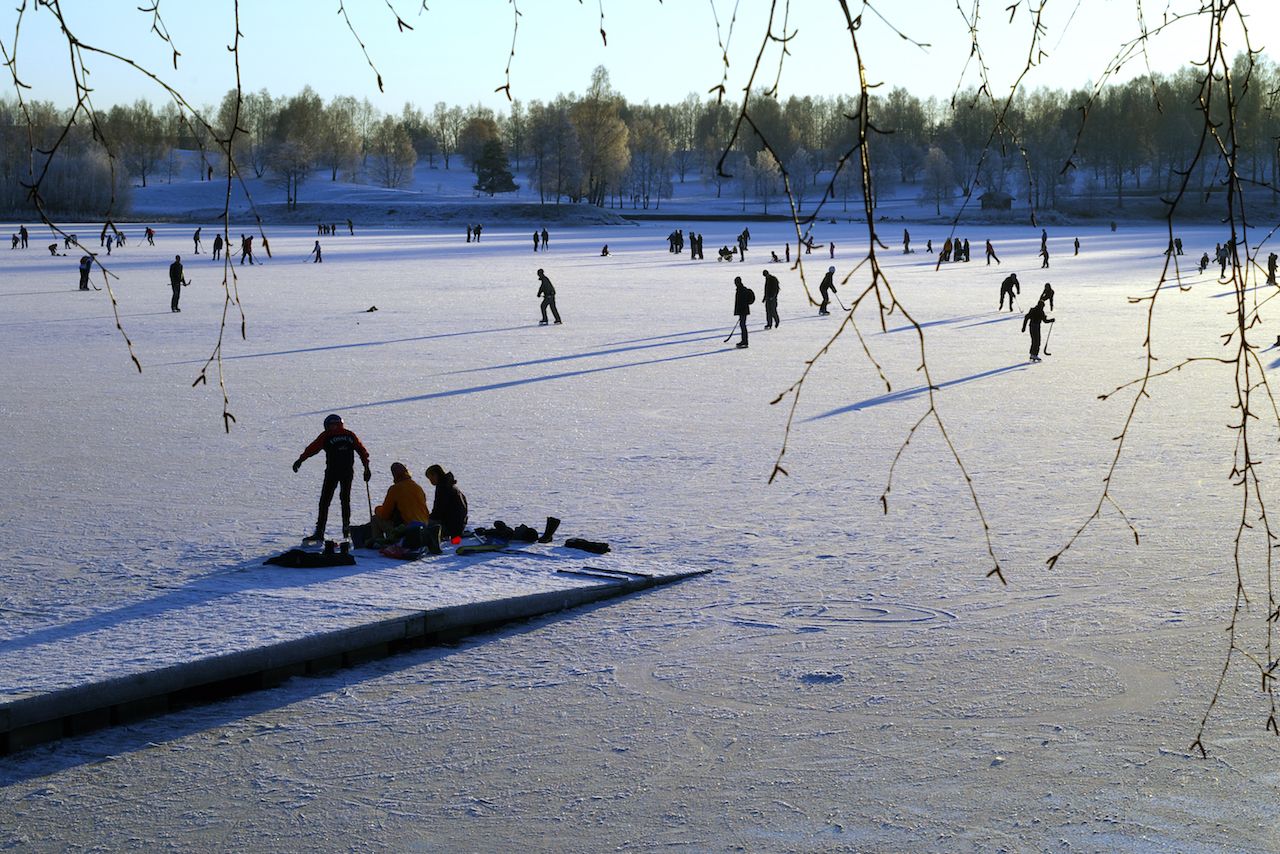 Several lakes in the wooded forests on the outskirts of Oslo are popular winter skating spots. Bogstadvannet is only the second largest among them, but it’s one of the most popular. On any stormless winter day during the few hours that the sun is out, you’ll find ice skaters there. Hemmed in by thick Nordic woodlands, stunning Bogstadvannet is only 20 minutes from the middle of Oslo.

Lush, green, and flanked by sandy beaches in summer, in winter Bogstadvannet becomes a picturesque natural ice skating rink. Early in the morning, you can see the silhouettes of skaters emerging from shrouds fog floating across the surface of the lake. Skating on Bogstadvannet is equally magical in the afternoon before the winter sun sinks behind the forested hills in the distance. 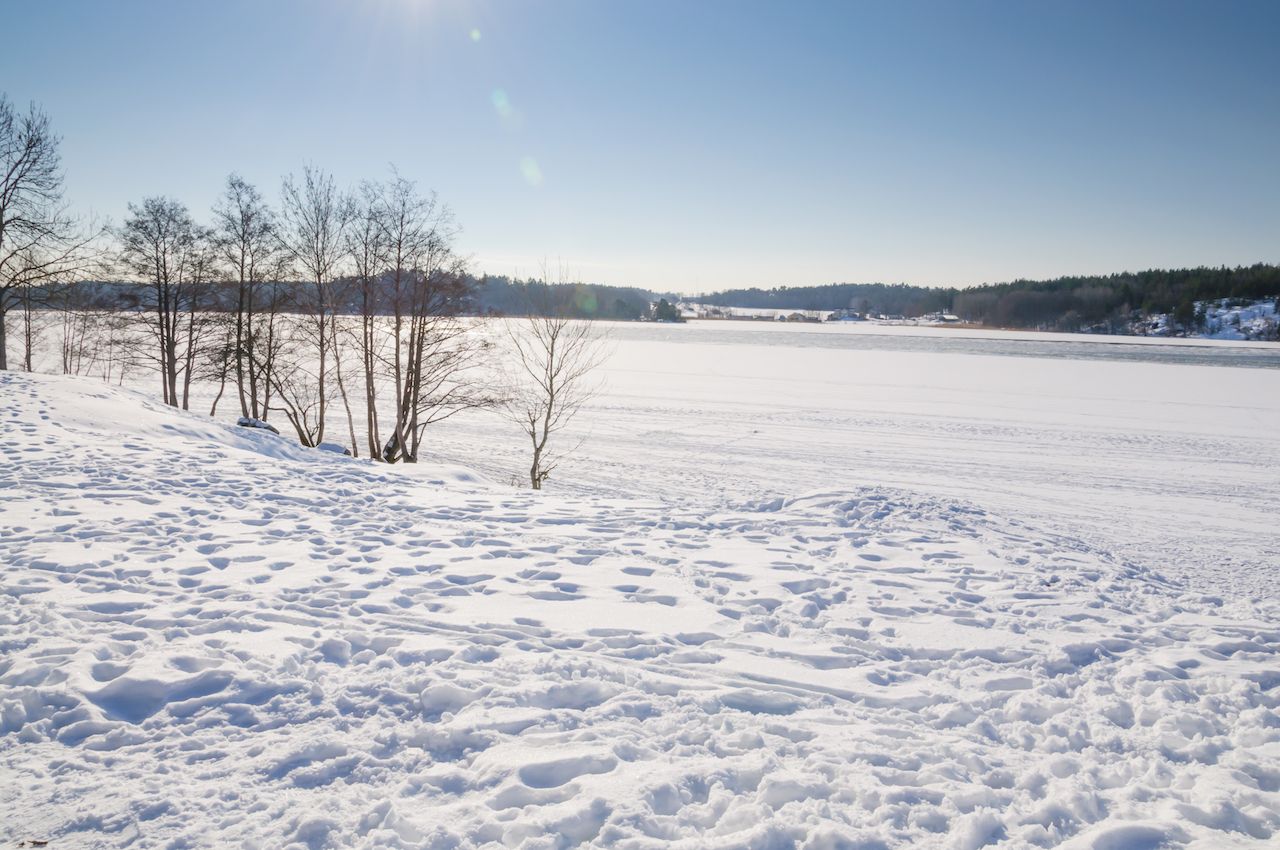 You don’t have to travel far from Sweden’s capital to find yourself surrounded by world-class natural ice skating rinks. Just outside the city, the frozen waterways of the Stockholm Archipelago and its surrounding lakes combine to create one of the planet’s most epic ice-skating environments. Within minutes from the capital city, you can set out on a cross-country skate adventure for days on end.

Just an hour’s drive out of Stockholm, you can embark on a Nordic skating adventure on the crystal clear black ice of Lake Mälaren. Spanning 440 square miles in total, it’s the fifth largest in Europe. While much of the lakeshore is densely wooded, the Mälaren region is also extremely rich in history. A number of beautifully preserved monuments from the Imperial Age still stand at the lake’s edge, among them the imposing, onion-domed Gripsholm Castle. Where else but Sweden can you ice skate on one of the world’s most beautiful lakes and find yourself zipping past the fairytale-like facade of a baroque 17th-century castle? 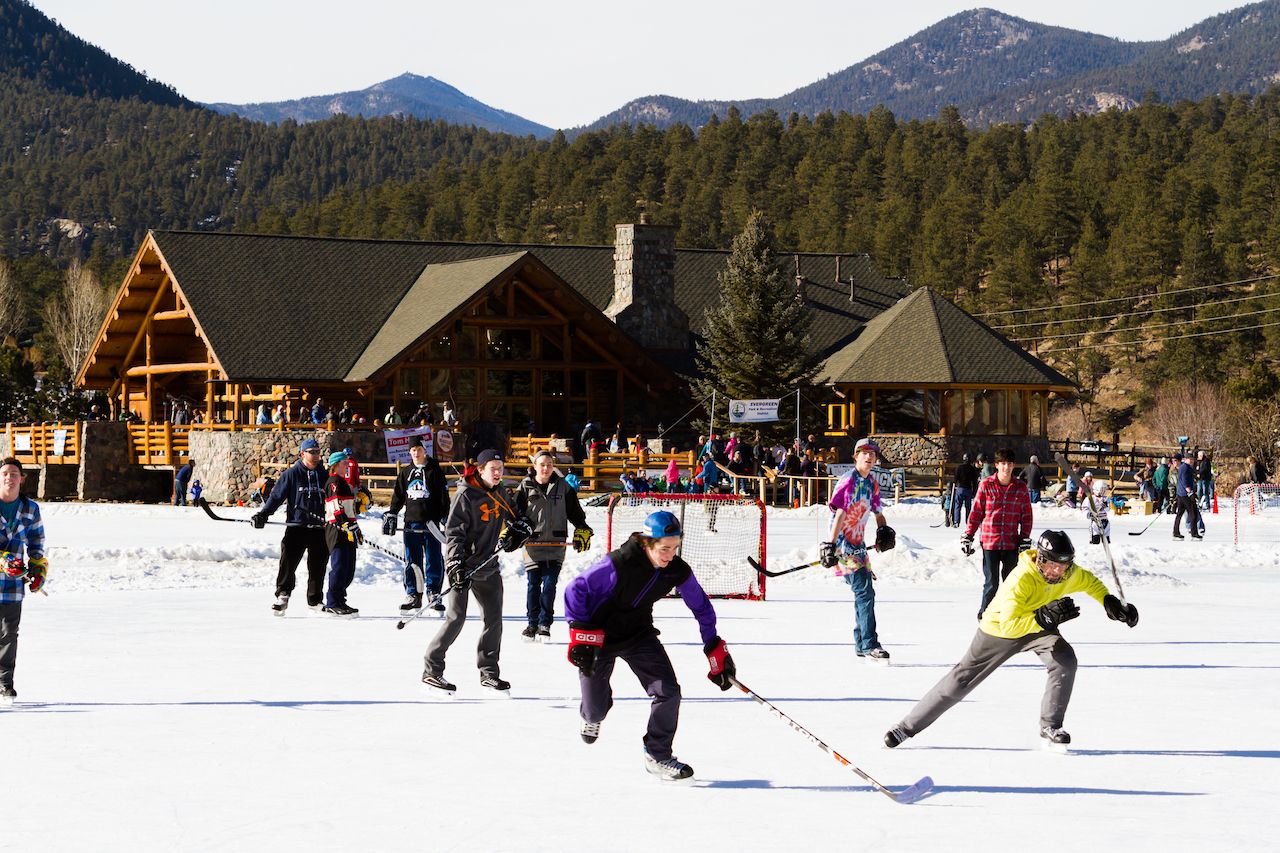 Most natural skating areas in the continental US are on smaller lakes and ponds in the northern midwest states and in the Northeast. However, a very big body of water where you can enjoy an authentic natural ice skating experience is Colorado’s mighty Evergreen Lake. It spans 40 acres and is encircled by dense thickets of lodgepole and ponderosa pine that stay verdant and vibrant year-round — hence the lake’s name.

Evergreen may be one of the world’s largest groomed outdoor ice skating rinks, using a Zamboni to make the icy surface usable for local ice hockey teams, as well as for visiting families on a leisurely afternoon skate. You can rent ice skates on site. Since it’s only a 40-minute drive west of Denver, Evergreen is an easy day trip — although cozy wood cabins for an overnight stay aren’t far from the lake shore. 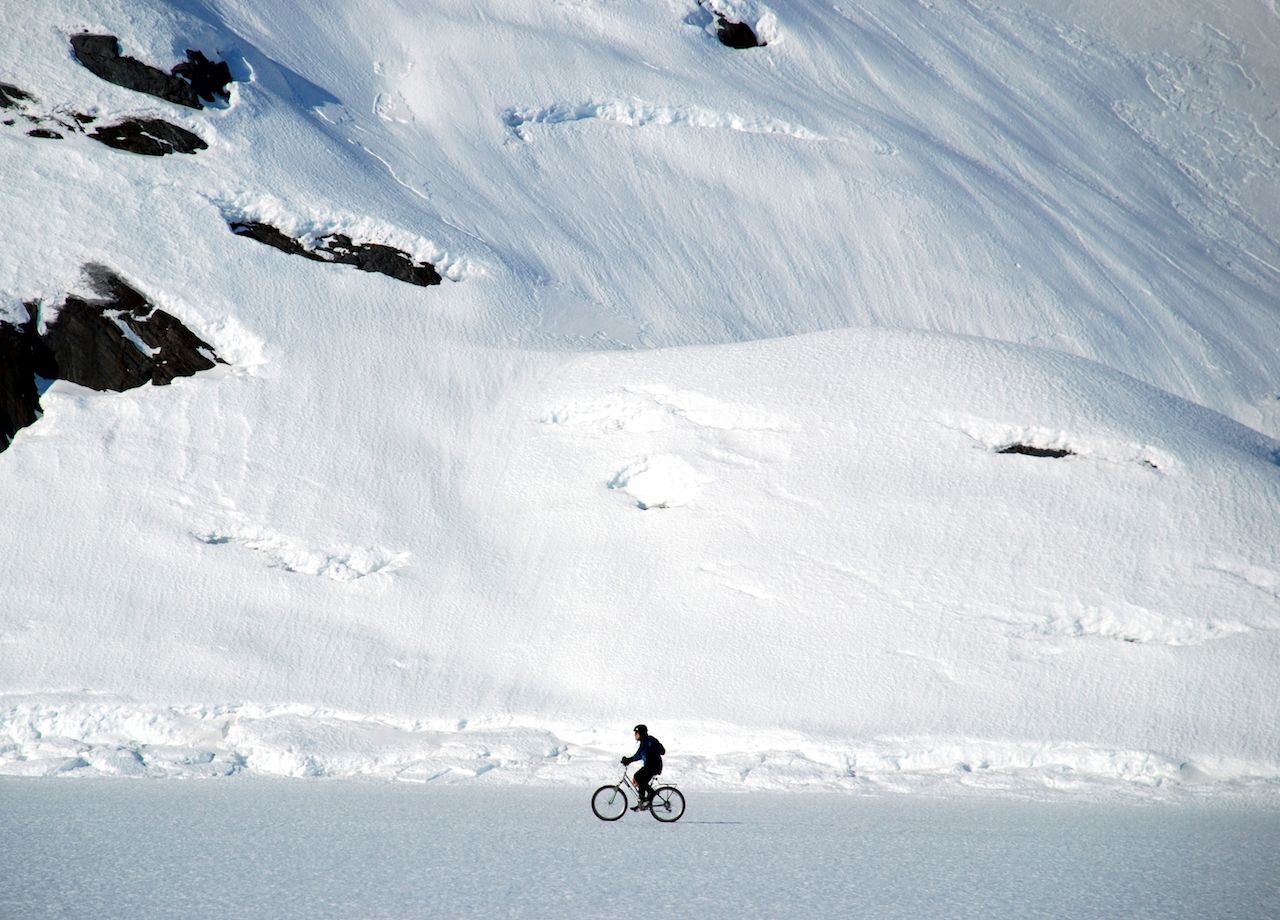 The frozen wilderness of Alaska is the ultimate destination for backcountry skaters in pursuit of the perfect expanse of pristine wild ice. In south-central Alaska, hardcore adventurers seek out solidified rivers, lagoons, and even ice caves for an adrenaline fix, weaving their way across a frozen minefield of icebergs and snowdrifts. The very deep Portage Lake in Chugach National Forest is paradise for wild ice chasers. Three miles long and almost a mile wide, it’s situated at the foot of Portage Glacier, a monolith of shimmering blue Arctic ice. If you’re so inclined, you could also ride across the frozen lake on a fat bike outfitted for winter conditions. 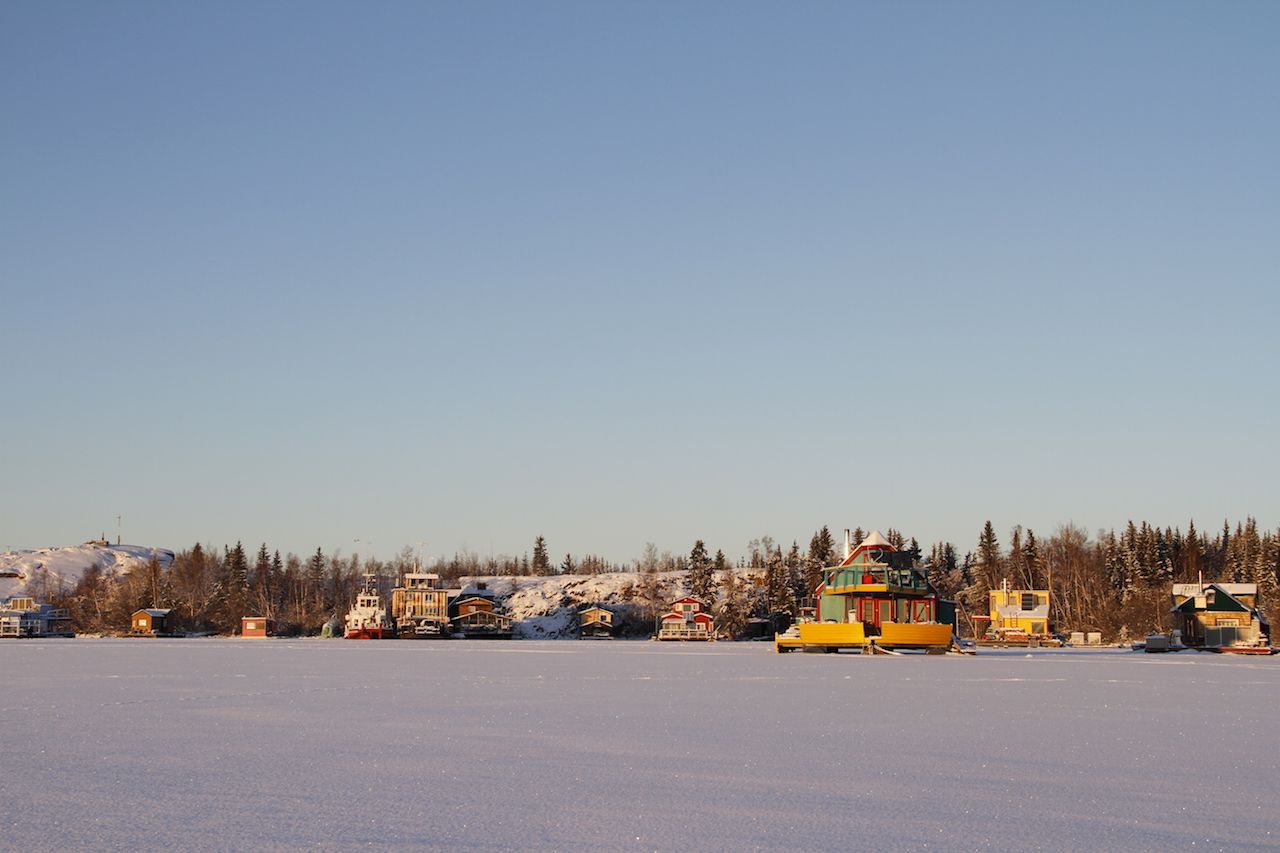 Canada has no shortage of magnificent natural ice skating destinations, and few are more spectacular than the Arctic lakes of the Northwest Territories. Great Slave Lake, near the regional capital of Yellowknife, is the 10th-largest lake in the world. In winter, it solidifies into a glittering frozen expanse, stretching as far as the eye can see. You can ice skate on the lake for close to half of the year. In late March, it hosts the Long John Jamboree, inviting skate-clad revelers to enjoy a final blast before the spring melt.

Just 250 miles shy of the Arctic Circle, the shape-shifting lights of the aurora borealis sometimes appear in the night skies above Yellowknife, illuminating the surface of Great Slave Lake with pulsating streaks of cosmic color. 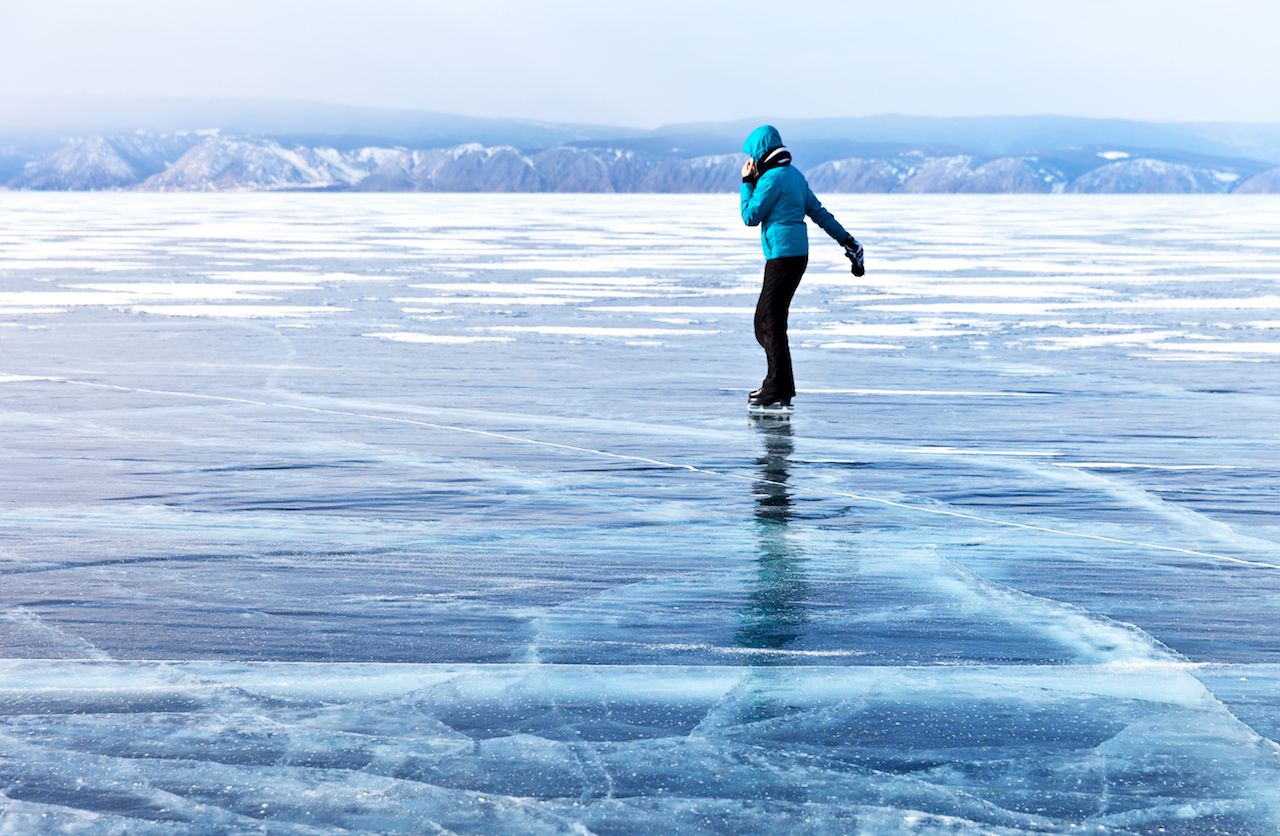 It may be no quick jaunt, but if you can manage to make it to Siberia, you’ll be rewarded with the most stunning ice skating experience on Earth. The world’s deepest lake, home to around a fifth of the world’s freshwater, covers a staggering 12,248 square miles. Baikal is larger than Belgium and contains more water than all the North American Great Lakes combined. What makes this World Heritage-listed wonder even more remarkable is that the entire surface is completely frozen over in winter. Between November and April, Lake Baikal becomes the biggest ice skating rink on the planet.

The ice averages over a foot thick and is so translucent that you can peer straight through it into the ink-black, unfrozen depths of the abyss below. In 2012, five adventurers — among them photographer Daniel Korzhonov — set out on a 250-mile, two-week journey, crossing Lake Baikal from north to south on ice skates. We suppose if you’ve flown that far to ice skate, you might as well make the most of it.