Southeast Asia has some of the world’s most stunning scenery — massive mountain ranges, dense cloud forests, tea plantations, and tiered rice terraces — and the best way to explore it is to rent a motorbike and hit the road.

But before you hop on a bike in an area of the world where the roads are busted, the traffic out of control, and the driving rules hardly respected, take a motorbike driving lesson, get an international driving permit, and a health insurance plan that will protect you in case you have an accident. Also, be sure to pick up a local SIM card and load it up with data so you can access Google Maps from the road, because you will get lost and need all the help you can to find your way. If you’re terrified of driving a motorbike, just hire a local driver and enjoy the views from the back. Here are seven of the most amazing motorbike routes in Southeast Asia that will get you stoked for a two-wheel road trip. 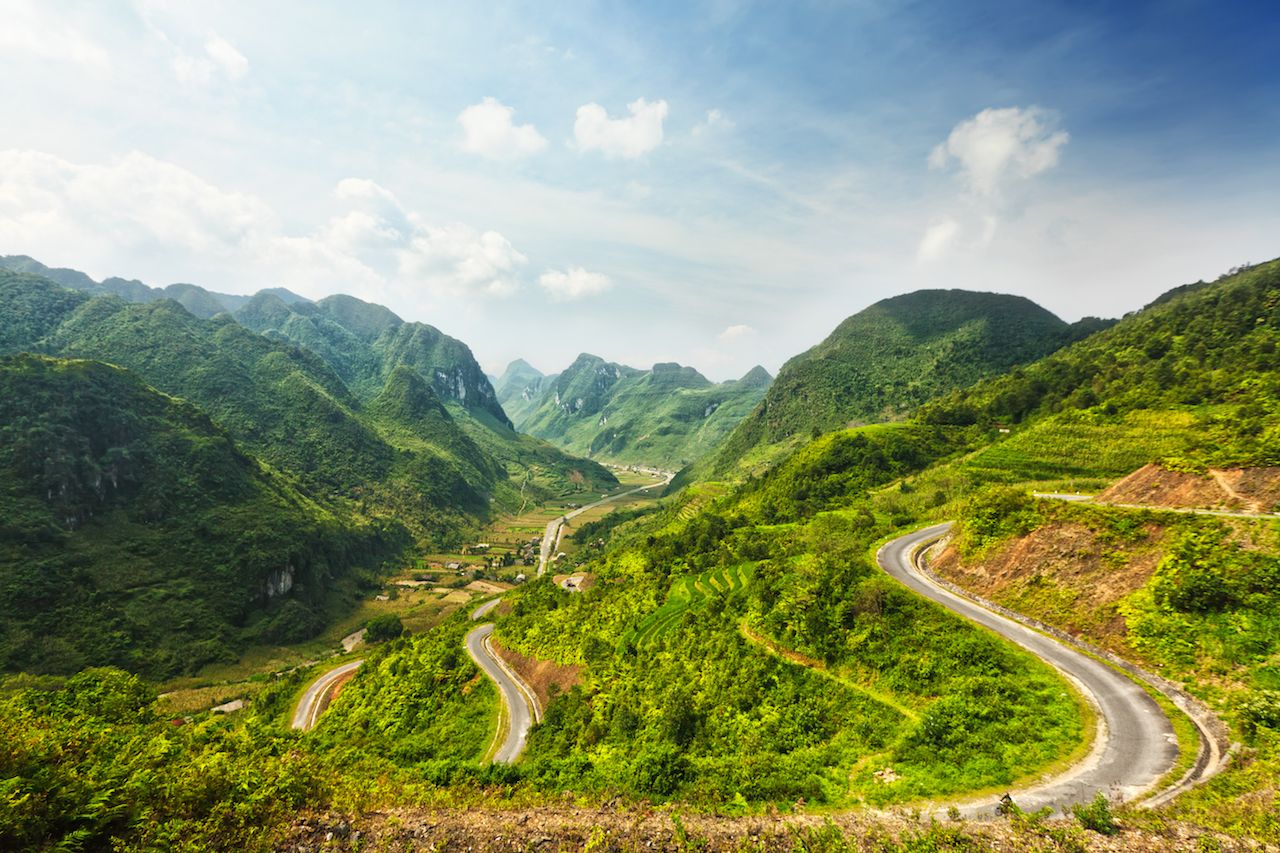 Travelers in Vietnam flock to Sapa to stroll through rice terraces among water buffalo, making the place way too busy to be enjoyable. Skip it altogether and head further north to the mountainous province of Ha Giang, which is widely underrated.

In order to help conserve the culture here and prevent the over-tourism problem that’s taking place in Sapa, it’s crucial to visit Ha Giang responsibly. I did the Ha Giang loop for four days with the local YESD community-based tour company, which I found on I Like Local. I only stayed in locally owned and operated guesthouses and homestays, which ensured that my tourism dollars went straight into the community.

The route is well marked on Google Maps, but note that the road and the weather change drastically with the topography of the region, so be ready to encounter rain and steep terrain. Along the way, the views are breathtaking, but it’s not wise to go trekking due to leftover mines from the Vietnam War. Also, most of the land in the area is private farms that cultivate corn or rice, so don’t go crushing people’s crops. Instead, hike up to the Lung Khuy cave. Be sure to stop for a Vietnamese coffee at Heaven’s Gate, a panoramic lookout point.

It’s best to do the Ha Giang loop solo during the dry season. The weather will be hot, and it won’t be as green, but the risk of being caught in storms, mudslides, or rock falls will be minimal. 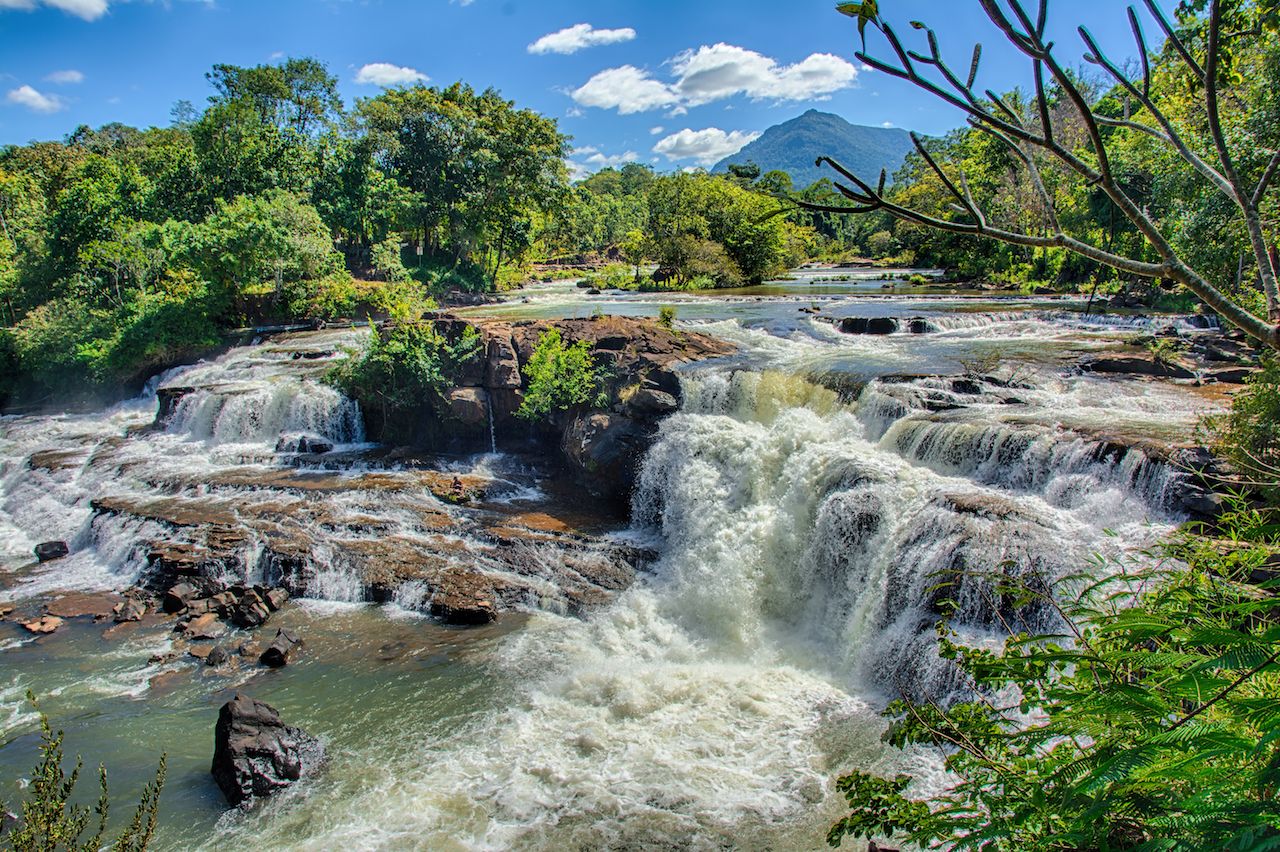 The Bolaven Plateau is a lush area in southern Laos with many waterfalls and coffee plantations. This part of the country was badly damaged during the Vietnam War, and there are still many UXO (unexploded ordnance) in the ground, so don’t venture off on unmarked trails should you ditch the bike and want to hike for a bit.

If you only have time for a day trip you, can easily visit Tad Fane twin waterfalls — you can even zipline around the park that surrounds the falls. Nearby is the Tad Yuang waterfall. During the dry season, you can swim in the pools of water that gather above the fall, but be wary of doing this during the wet season as the current is stronger than it appears. Visit the Bolaven Plateau Coffee Producers Cooperative Cafe to learn about coffee cultivation in the area and tour the farm. During the off season, they make bamboo straws.

There are two loops that go around the Bolaven Plateau. Both start from Pakse where there is an international airport. The short loop takes most people two to three days. The roads are good quality, and the sights are clearly marked along the way, making it more enjoyable. Be sure to grab a paper map of the route as cellular signal and Google Maps may not always be accessible. You can stay in a homestay the first night in Tad Soung and see some nearby waterfalls. The following day, drive towards Paksong where you can learn about mining history in the area.

The big loop can take up to five days and occasionally goes off-road. The big draw of the larger loop, beyond an epic adventure, is the chance to visit Tad Tayicseau, which has seven amazing waterfalls. Unlike the waterfalls earlier in the loop, to reach the cascades in this area you’ll have to hike through well-marked trails. This Google Maps covers all the highlights of the Bolaven Plateau. 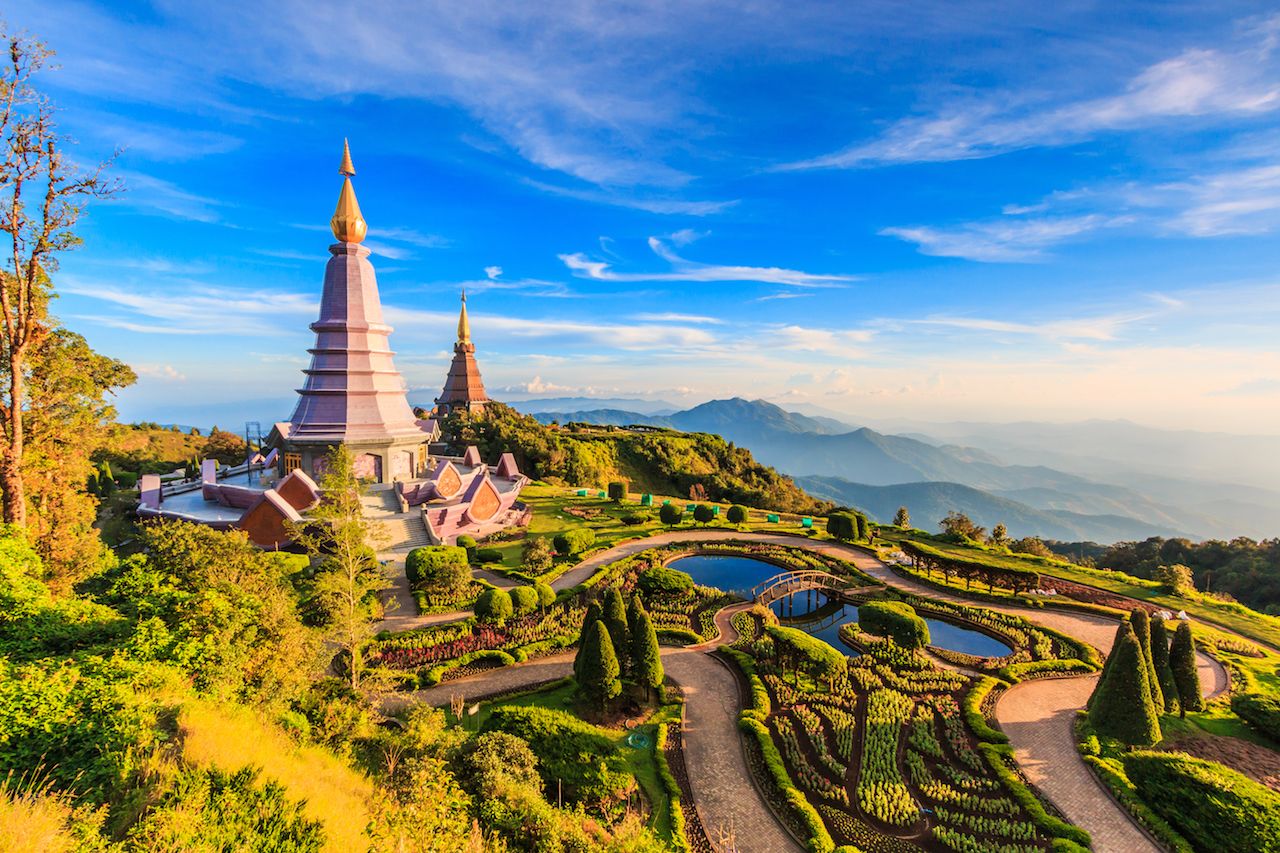 No trip to Thailand is complete without visiting Chiang Mai and Pai in the north, so rent a motorbike to get between the two and see some incredible nature, remote Buddhist temples, and a waterfall or two along the way. The famous route that goes between the two northern Thai cities is known as the Mae Hong Song Loop. You can take this route quickly in a day, or spread it out over almost a week to see all the sights.

You may take the Mae Hong Son Loop either clockwise or counterclockwise from Chiang Mai. Counterclockwise is a more direct route to Pai, but the terrain is a bit more difficult. Start out easy by going clockwise on the Mae Hong Song Loop by following this Google Map. The most noteworthy stop is Doi Inthanon, the tallest mountain in Thailand. Doi Inthanon National Park has waterfalls, gardens, temples, and even a mossy forest that travelers should take the time to check out. Along the way on Mae Hong Song, you’ll be able to make pit stops to explore local crafts villages, dip into hot springs, and have some roadside snacks. 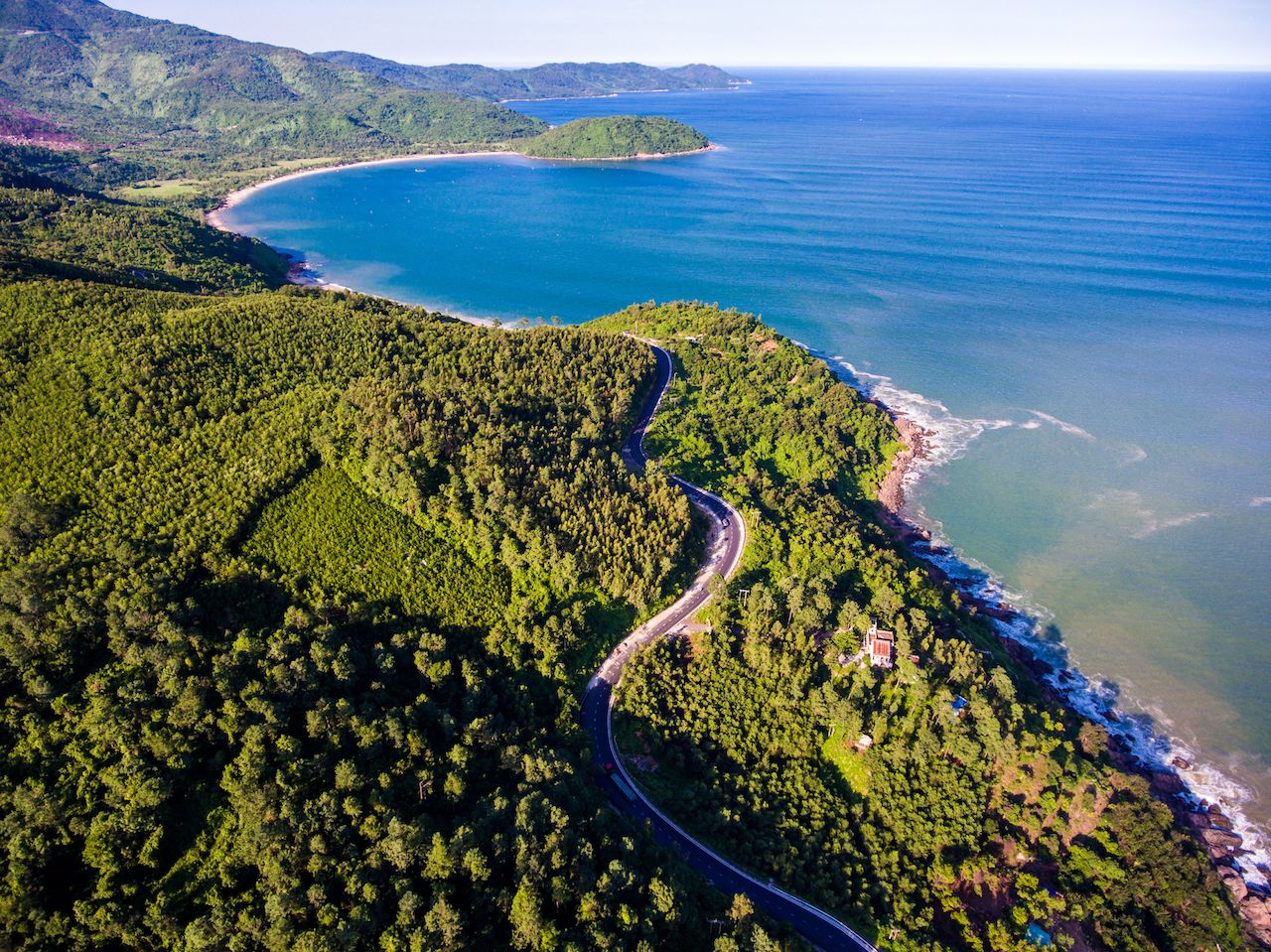 The Hai Van Pass is a scenic route in central Vietnam from the coastal city of Hoi An to the imperial center of Hue. This Google Maps route is a great one to follow. The ride will take you weaving through mountains and past picturesque bodies of water. The road is very safe, too. If you don’t want to drive your own motorbike, you can head out with Hoi An Motorbike Adventures with a professional driver who will also serve as your local guide to show you cool spots.

There are many places to check out along the way on the Hai Van pass, such as war bunkers, the pristine Lang Co Beach, Lap An Lagoon where oysters are cultivated, and farms where water buffalo graze. The actual Hai Van Pass is only 13-miles long but can be explored from anywhere from an hour to a full day depending on what you want to experience.

After the pass ends, before you reach Hue, you can cool off at the Elephant Springs. Here, locals have turned a riverbed into a series of pools full of crystal-clear freshwater. Before you reach Hue, stop by the An Bang ghost town to admire the massive tombs built to honor wealthy Vietnamese who’ve left this world. The Vietnamese believe you must take your worldly possessions with you to the afterlife, so many of the mausoleums include kitchens and bedrooms. 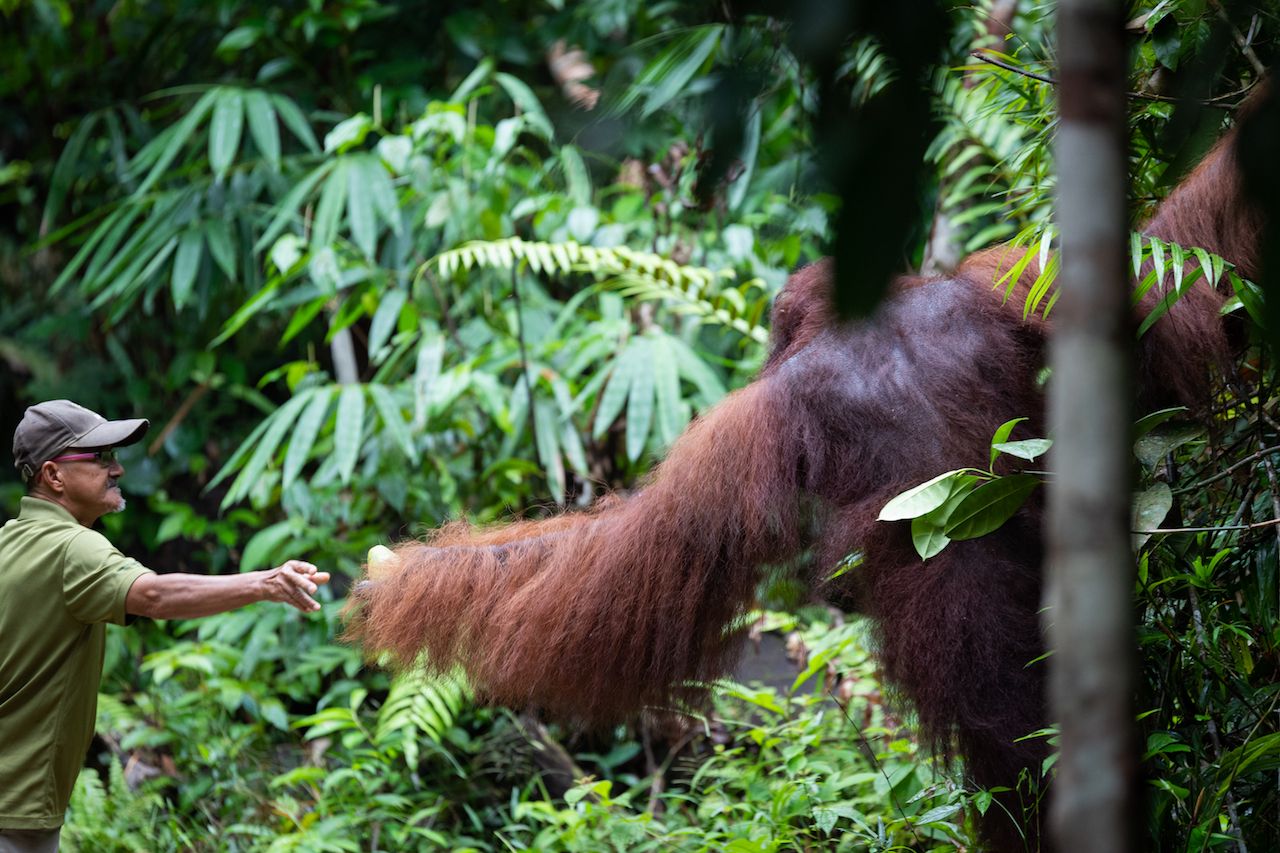 Kuching is the capital city of the state of Sarawak in the Malaysian portion of Borneo. The area is rich with incredibly diverse flora, wildlife, and culture.

Pick up a motorbike the night before in Kuching. Wake up with the sun and grab a bowl of laksa with the locals before zipping past cat statues and incredible mosques as you head out towards Bako National Park. You’ll have to leave your bike at the riverside and take a boat out to the park, but the parking attendants will make sure it’s safe. At Bako National Park, you’ll be able to see wild bearded pigs and the endangered probosci long-nosed monkeys.

Afterward, head back to the mainland and drive through the dense jungle to the Semenggoh Wildlife Centre for the afternoon feeding, usually at 1:00 PM. The orangutans here are semi-wild, so there’s no guarantee you’ll see them, but you’ll be able to learn about their habitats and the threats to these endangered primates.

Spend the afternoon exploring Kuching’s many caves — the Fairy Cave and Wind Cave are incredible, just make sure you bring a flashlight. Afterward, continue to cut through the lush mountains until you reach the Bidayuh Annahrais Longhouse. Here you’ll learn about the tribal people of Borneo and even have the chance to stay overnight in a traditional homestay. 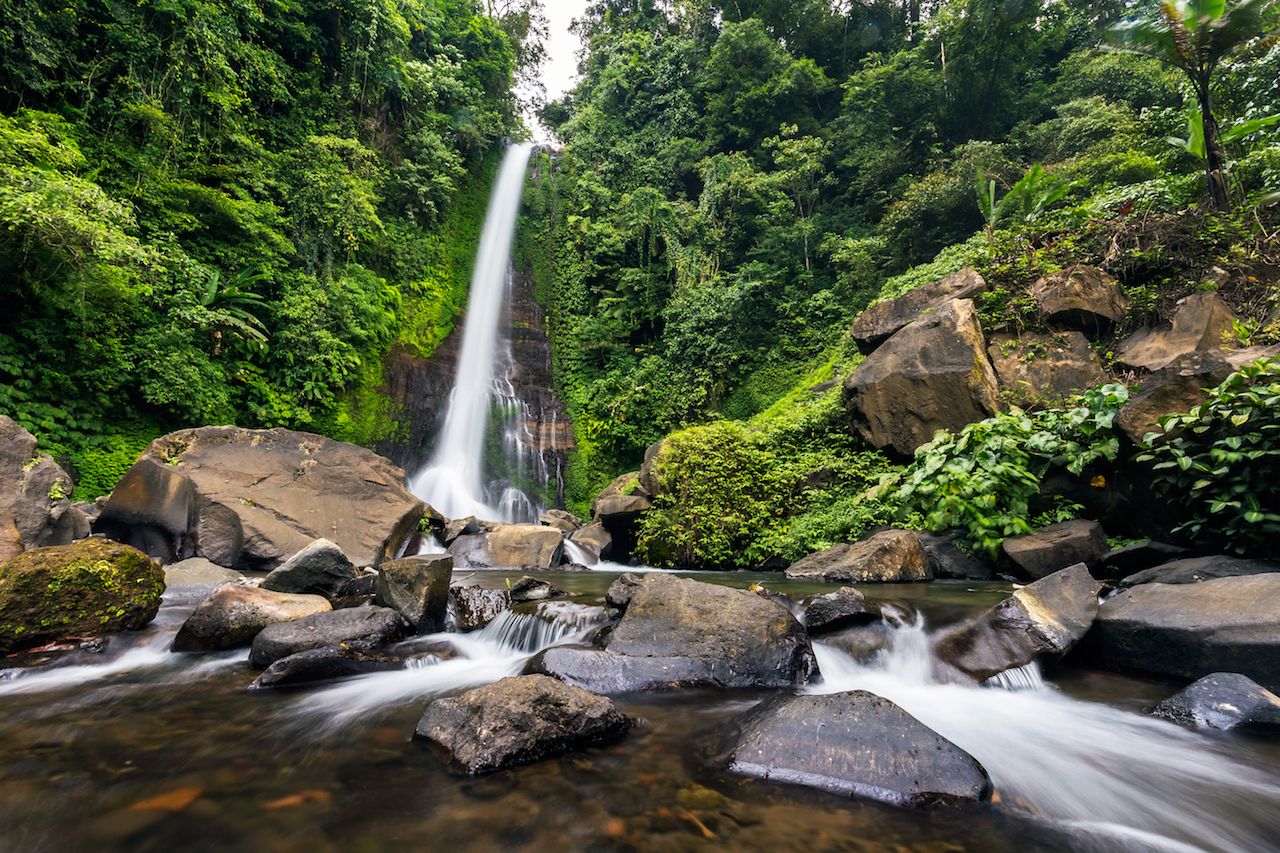 If you’re one to chase waterfalls, this is the Southeast Asia motorbike route for you. The northern section of Bali has many waterfalls, most of which can be easily reached by road. This map from Google Maps will help you create an itinerary, but you’re sure to discover a few others by paying attention to signs and asking locals where to find off-the-beaten-path cascades.

All of the falls could easily be seen in a day, but it’ll be more enjoyable to split the waterfall motorbike route in Munduk into two days and spend the night in a local village. Be sure to pack a swimsuit as it’s possible to swim in most of the falls.

The must-see waterfalls include the Banyumala Twin Waterfall, which has a few cascades within the park. The easiest to reach is Pucak Manik Waterfall. Git Git is one of the most popular waterfalls but can be tricky to find. Not to worry: There are so many waterfalls in the area that you’re sure to come across one.

Beyond waterfalls, you’ll have the chance to see farmlands, stunning views of the rolling hills of northern Bali, Hindu water temples, and interact with locals as this area is mostly tourist-free. On a clear day, you’ll be able to see the three mountains — Agung, Batur, and Batukaru — and all the way to the northern coastal town of Lovina. 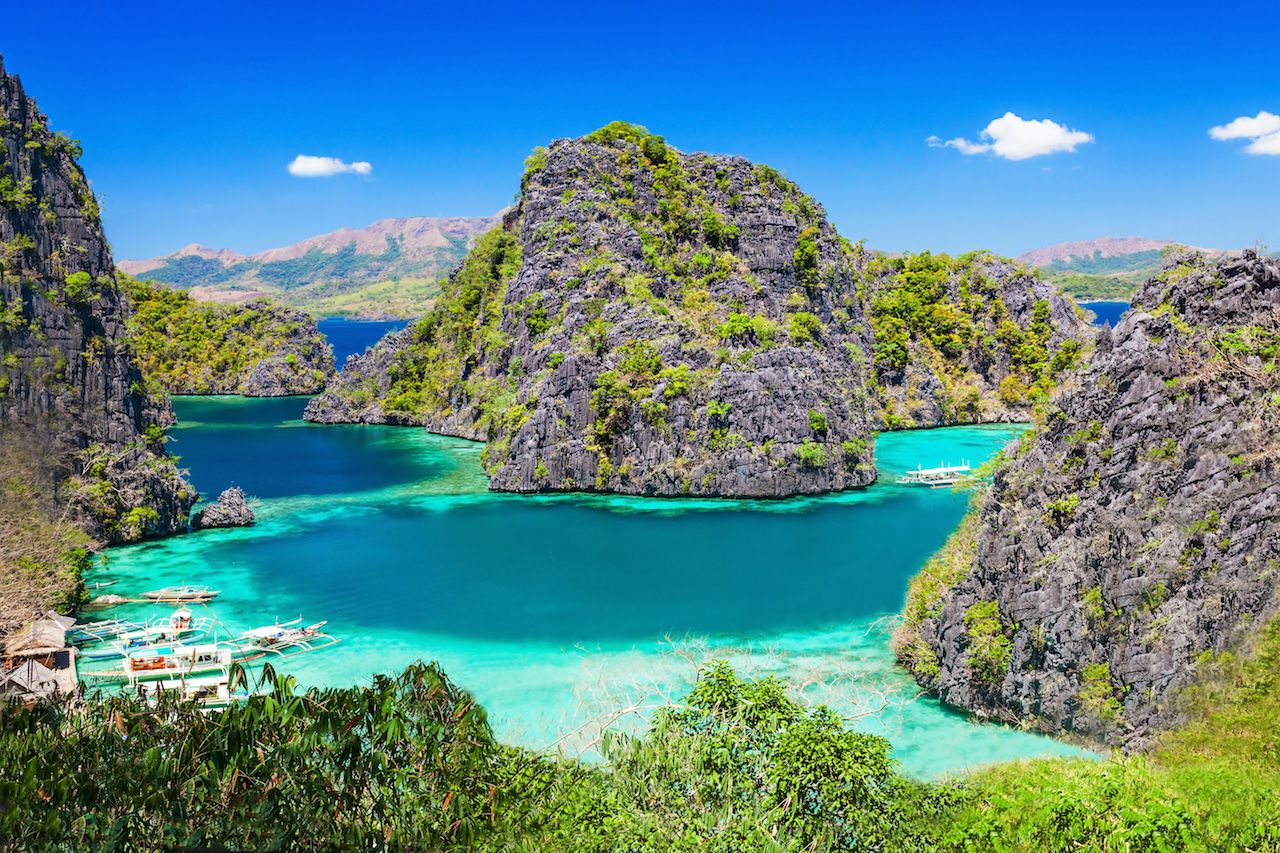 Beach lovers won’t want to miss the chance to rent a motorbike to traverse from Puerto Princesa to El Nido on the Philippine island of Palawan. The route is straightforward and easy to follow. It should take just four hours if you follow this Google Maps.

But, as this is one of the most beautiful islands in the world, you’re sure to want to hop off to enjoy the scenery or a swim every once in a while, so plan for a full day trip of about 10 hours. There are plenty of beachside towns along the way if you need a refreshing drink or snack. San Vicente is the place to stop for transparent water and white sand at Long Beach’s nearly 9.5-mile stretch of shore. San Vicente is about a halfway between El Nido and Puerto Princesa, so if you were going to stay somewhere overnight, this is the spot.

If you want to keep driving, go for it. The road that cuts across Palawan is very well maintained and stretches for 280 miles.

Trip PlanningThe 7 Most Overlooked Destinations in Southeast Asia You Need To Visit
Tagged
Road Trips Trip Planning
What did you think of this story?
Meh
Good
Awesome