A white and red parachute furls open against a cloudy gray sky. A small metal car, with knobs and wires pointing every which way, slows down as it floats through the air. The rover touches down on dusty, copper-colored ground. A mere 130 million miles away, cheers erupt.

On February 18, 2021, the NASA rover Perseverance touched down on Mars seven months after taking off from Earth. Perseverance will look for evidence of past life on Mars, investigate Martian geological history, and more.

NASA software engineer Shannon Towey knows the intimate inner workings of Perseverance and watched the landing with bated breath. Even though she was watching from home due to COVID-19, the perfect landing was a huge moment for her.

“It was a total party,” says Towey, laughing, describing the atmosphere on the remote WebEX chat, in which several hundred participants in blue polo shirts — worn to celebrate the landing — joined in from their homes.

Towey is a software engineer at NASA who’s been working on the Perseverance rover for almost the last four years. She’s at Jet Propulsion Laboratory (JPL) in Pasadena, CA, where she works on three NASA software teams. 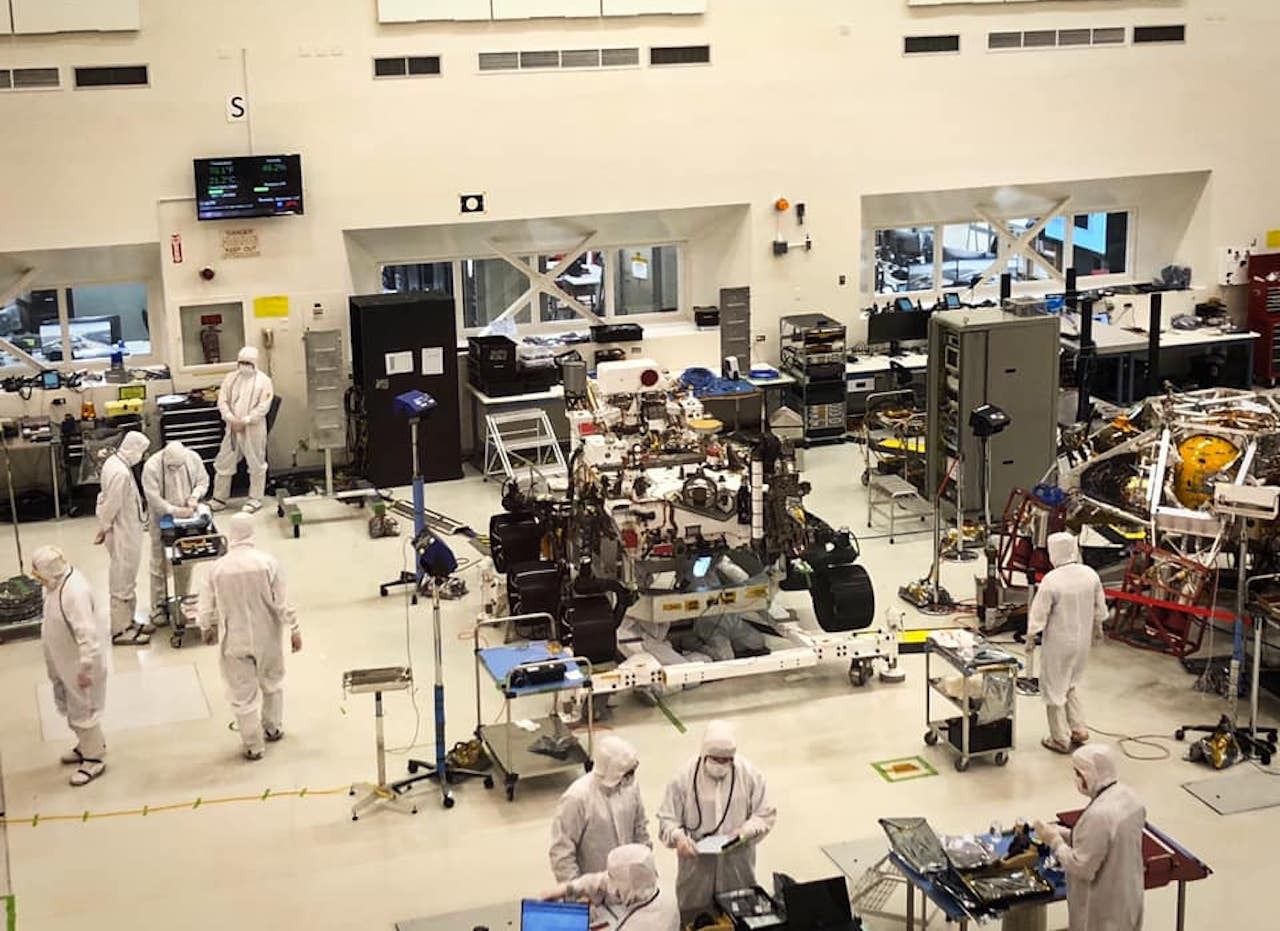 One of those teams is operations. There, she plans communications from Perseverance to Earth. Orbiting Mars, a network of satellites — with names like  Mars Reconnaissance Orbiter (MRO), Mars Atmosphere and Volatile Evolution (MAVEN), and Odyssey — do science and communicate with Perseverance, as well as the rover Curiosity and the lander InSight. At least one week before the communication happens, Towey helps plan it out. It’s a delicate task, as it takes about eleven minutes for information from Mars to get to Earth, and the satellites aren’t always on the same side of the planets as the rover, or facing Earth.

Another team Towey works on sketches out what Rover will do every day. Three weeks after Rover’s landing, the team is still planning out one day — or, rather, one sol — at a time. If you read or saw The Martian, you know that a “sol” is a Martian day. Although Towey says the teams hope to eventually start planning out Perseverance’s activities for two to three sols at a time, right now it’s one day for every sol.

“It takes us a full day to plan the next day in Rover’s life based on information that we got down from the previous day in its life. And it operates on Martian time…and the Mars day is around 40 minutes longer than an Earth day,” explains Towey. That means that people on the tactical ops team have to go into work 40 minutes later every day. “Luckily, I’m not on that schedule,” she says.

A favorite part of her job was developing a downlink tool for which she wrote the majority of the code, beginning about two years ago. She says she and the development lead on that project did most of the original planning for it, and it’s the first project she’s seen from conception to operation.

“It was the first project I really had ownership of, as I was the first person to work on it,” says Towey. “Going from sketching out diagrams on a whiteboard and doing concept testing on old Curiosity data… all the way through to when it was being built in the cleanroom, and then all the way through to it actually being on Mars. That was really cool.” 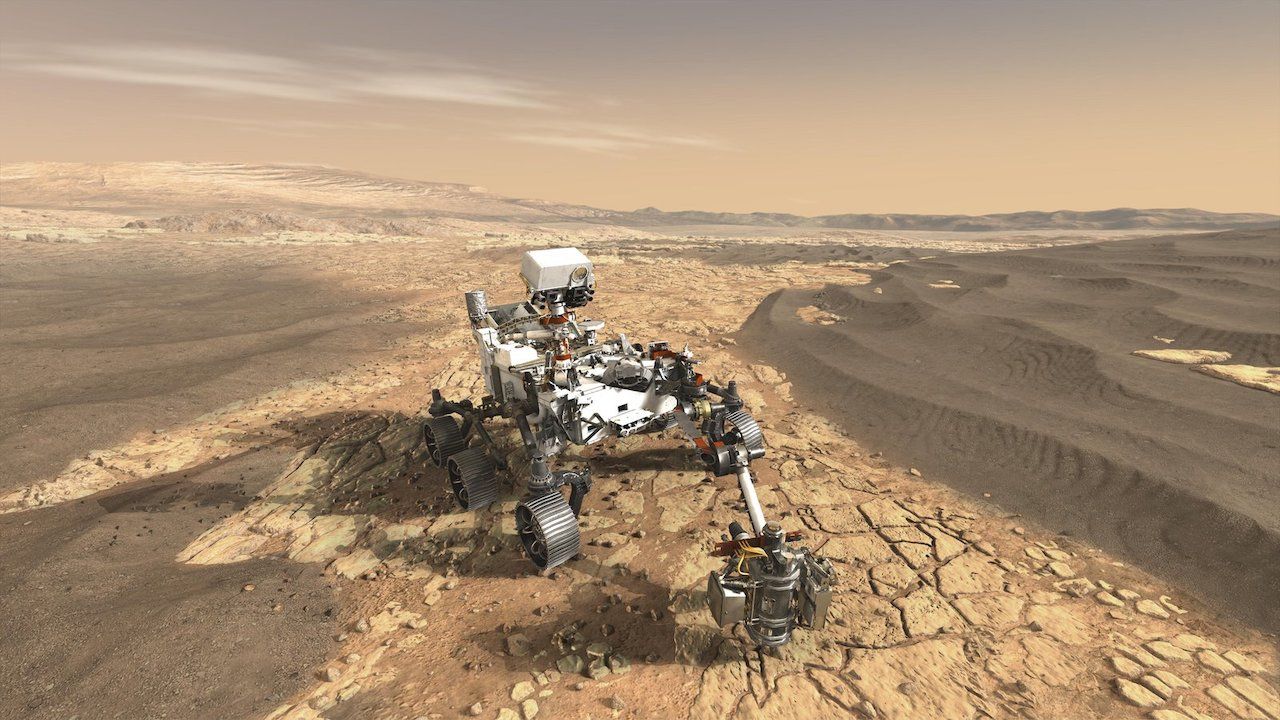 Towey is in her fourth year working at NASA, and says she loves it. Of course, helping satellites talk to rovers on Mars is literally an out-of-this-world job. But she also feels it’s a very supportive environment for women in science and other STEM fields.

While there are fewer women than men there, she’s had many women mentors and team leaders. She’s worked on all-female teams, and it feels more comfortable at JPL than in earlier experiences.

“I think JPL has done a really good job,” she says. “Especially more recently in hiring more women into the technical roles is something that they’ve taken pretty seriously.”

In 2019, 34 percent of NASA’s employees were women. Towey contrasts the number of women working at JPL with her college years as a physics major at the University of Chicago.

Being the lone female physics major in college was challenging, says Towey. “I felt like you could never be anonymous, in a weird way. Everyone always knew you were there. Some people would know how I was doing in classes,” Towey says. “It made me kind of uncomfortable. Especially in college, I was a really shy, introverted person.”

While her professors were supportive, they were mostly male. She went to a couple of Society of Women in Physics events, but felt like she didn’t want to call attention to herself and didn’t get very involved.

In 2015, Towey graduated from University of Chicago. For about a decade, UChicago had been sending two graduating physics students to work at CERN, or the European Organization for Nuclear Research, where scientists collaborate internationally to study subatomic particles with the world’s most powerful particle accelerators and detectors. Towey became the first woman ever sent by UChicago to CERN.

CERN was also an enormous cultural change from her experience in college as she was working with physicists from all over the world.

“A lot of scientists were from different countries where they may not have worked with as many women in physics. We worked with some Russian scientists on a couple projects. And I think that was one where they were all male,” she says. “They would be surprised that I was there.”

However, working at CERN was the first time Towey found a female mentor in physics that she felt she could really look up to. Savannah Thais was a PhD student at Yale at the time, and helped show Towey around the unfamiliar, foreign environment.

Thais was comfortable being cheerful and “girly” and also defending her opinions even with others who were senior to her, says Towey.

“I think growing up, in high school or when I was younger, I kind of felt like you were either super feminine-like, or into physics. And so I thought it was very cool how unapologetic she was about being a very cool physicist, and also a big champion of women,” she says.

Thais and Towey remain friends. “Both at CERN and JPL, I’ve been the beneficiary of being able to work with a lot of really excellent women and learn from them,” says Towey.

For young women who find themselves without female role models, though, that shouldn’t be a reason to give up. If Towey had waited to meet a woman in science to inspire her, she might not have pursued physics in the first place.

She went to a magnet school near her hometown in New Jersey that was themed around media and communication. And although she was always into space, a career in science hadn’t really been on her mind until she was inspired by her small advanced physics class.

“My high school physics teacher, he was awesome. He was Mr. Godkin,” says Towey. “We got to have like a little bit of influence over what we were taught, we got to dive a little more deeply into things that we thought were really interesting, we got to do kind of projects on our own.”

Towey says that was a pivotal class for her and the “perfect introduction” that made her consider going in STEM. “That kind of led me to believe that it was possible for me to do.”

Likewise, Towey’s first introduction to JPL had been as an intern while she was still a student at UChicago. There, the principal investigator on a project she was working on gave her the opportunity to not just learn about the project, despite her knowing very little at first, but also introduced her to other work being done at NASA.

“That was definitely very important. I don’t think I would be at JPL now, if I hadn’t had that experience. And so he was definitely a really good mentor,” says Towey.

And she’s excited about what the future holds at JPL. For one, she wants to be a mentor for other women in science. “I want to be that person. As I get further into my career to take opportunities to be a mentor. Especially with female students, more junior employees. I think it’s something that I want to be able to pass forward.”

Also, just five years from now, NASA plans to send a mission to MARS to actually pick up the samples that Perseverance has been studying and bring them back to Earth. That would be the first time anything has ever returned that we’ve sent to Mars.

“One day, in 2031 or so, you’d be able to be a Martian geologist and have samples of interesting Martian geology in your lab,” says Towey.

And, who knows, maybe the lead geologist will be a woman.

10 Stargazing events you don’t want to miss in 2021
Tagged
Astronomy Female Travel
What did you think of this story?
Meh
Good
Awesome

You Can See Remnants of Halley's Comet Fly by This Week. Here's Where To Look.