When it comes to New England island vacations, Martha’s Vineyard and Nantucket dominate the discussion. But unless you’re willing to shell out an exorbitant amount of money for a rental, they’re relatively inaccessible. The good news is that there are hundreds of islands are scattered throughout the coast of New England — and plenty of them make for a memorable getaway. While they may not have the notoriety of Nantucket, they’re more accessible and affordable, and you won’t feel the slightest pressure to dress like a walking Vineyard Vines advertisement. These New England islands are the perfect alternatives to Nantucket. 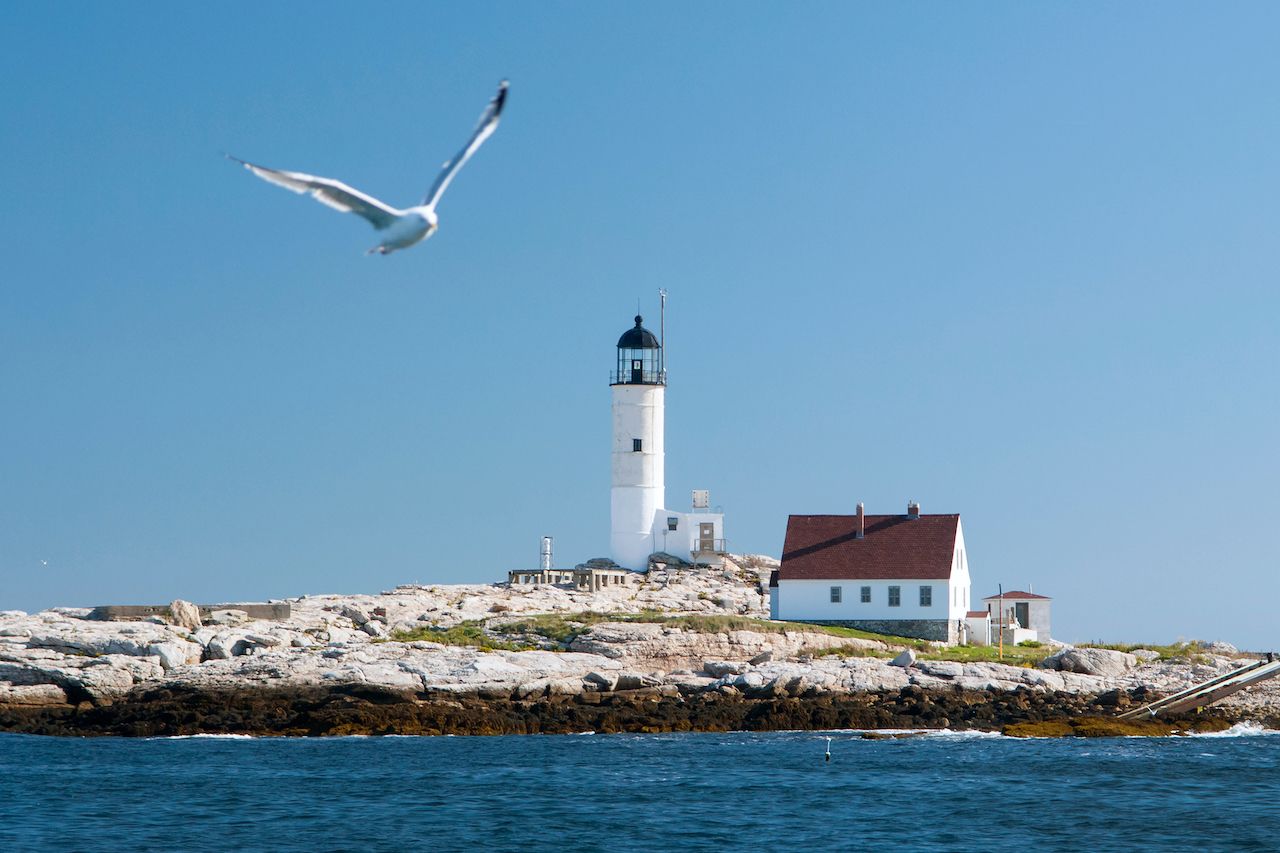 The Isles of Shoals are actually nine separate islands off the coast of New Hampshire and Maine, but don’t worry — you don’t need to visit them all. Originally used as fishing camps in the early 17th century, the islands were named in 1614 by Captain John Smith. Since then, the islands have served various purposes, including as a bombing range for the US Navy, the site of a pirate honeymoon, and now home to a seal colony and wildlife sanctuary.

The second-largest island, Star Island was once the biggest fishing port on the East Coast, and in the 1800s, its Oceanic Hotel was a popular destination for artists, writers, and intellectuals looking for peace of mind. Still operational, the Oceanic is the only hotel on the Isles of Shoals, making Star Island the ideal base for your island getaway. When you’re not kicking back on the hotel porch enjoying the peaceful seabreeze, you can take a guided environmental tour, kayak around Gosport Harbor, or sign up for one of the many family programs offered on the island.

Smuttynose Island, on the other hand, is a day-trip kind of place. With no restrooms, trash cans, or tourism infrastructure on the island, this is as rugged a New England experience as you’ll get. That’s exactly what makes it special. Smuttynose Island is home to one of the region’s best walking trails, leading through wild brush, grass, and rocks to a cairn at the tip of the island.

Getting there: To get to Star Island, simply take the Isles of Shoals Steamship Co. ferry from Portsmouth, New Hampshire, which runs every few hours. Smuttynose Island is a bit more difficult to reach as it’s not serviced by a ferry; the only way to get there is via a small private boat. 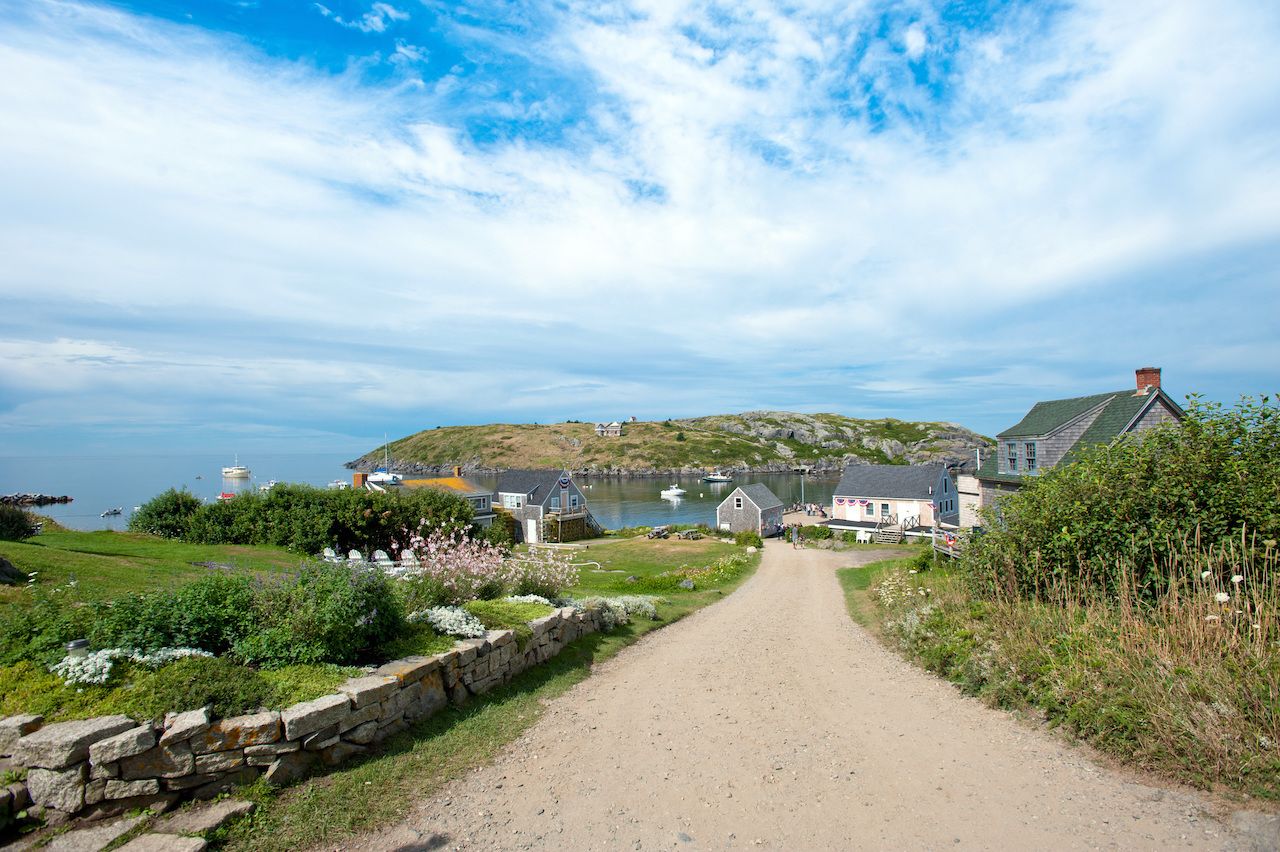 Monhegan Island is the perfect blend of relaxation and activity. With no pavement, cars, or even shops, the island is truly a far cry from the bustling cobbled streets of Nantucket. But tranquility doesn’t equal boredom. The island has an abundance of hiking trails for people of all skill levels, leading through untouched wilderness. The Whitehead Trail and Burnthead Trail are shorter, and perfect for beginners, while the Cliff and Blackhead Trails are better suited for seasoned hikers who want a more rugged wilderness experience. There are around 18 trails total, so you can choose which one is best for you.

Once you’ve finished your hike you’ll probably be in the mood for a cold one. If it seems like craft breweries are sprouting up all over the place, it’s not just your imagination. Even quiet Monhegan Island has its very own brewery, called the Monhegan Island Brewing Company. They specialize in craft beers brewed right on the island, including Balmy Days, Trap Stacker, and the Quadricentennial Pale Ale.

A few beers might also be the confidence boost you need to venture into the local art museum. There’s no need to be an art connoisseur to appreciate the Lupine Gallery, which showcases paintings and sculptures by over 50 local artists. There’s also the Monhegan Museum of Art & History, where you can learn all about the island’s history and artistic tradition.

Getting there: Located just 10 miles off the coast of Maine, it can be reached via ferry from Port Clyde, New Harbor, and Boothbay Harbor. Also note that as the island has no roads; ferries are for passengers only. 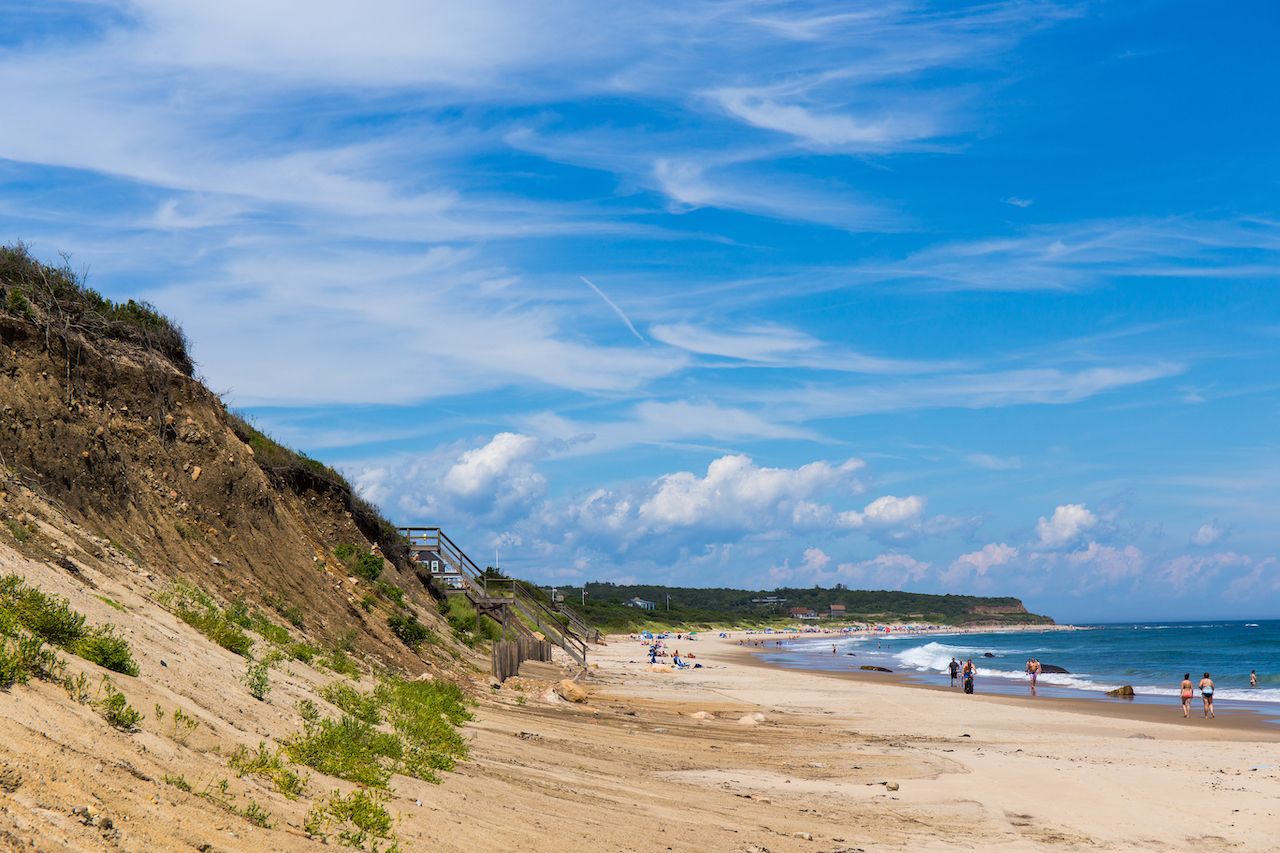 About 12 miles off the coast of Rhode Island, Block Island has all the small-town New England charm of Nantucket without the country-club crowd. The town of New Shoreham has a population of just over 1,000 residents, and it’s the perfect base for a long weekend exploring the island.

The island’s entire perimeter is lined with 17 miles of free beaches, but when your skin is peeling and you’re looking for some alternatives, there’s plenty to do besides lounge in the sun. In addition to hiking or biking one of the island’s many nature trails, you can also go parasailing, kayaking, horseback riding, bird-watching, and fishing. And if it’s raining, there are dozens of specialty shops, art galleries, and antique stores where you can easily pass the day.

Getting there: The island is accessible via the Block Island Ferry from Galilee and Newport in Rhode Island, and Fall River in Massachusetts. The trip takes about an hour. Once on the small island, you could traverse it with a car, but at only seven miles across, it’s really not necessary. You could rent a moped for a more unique way of getting around. 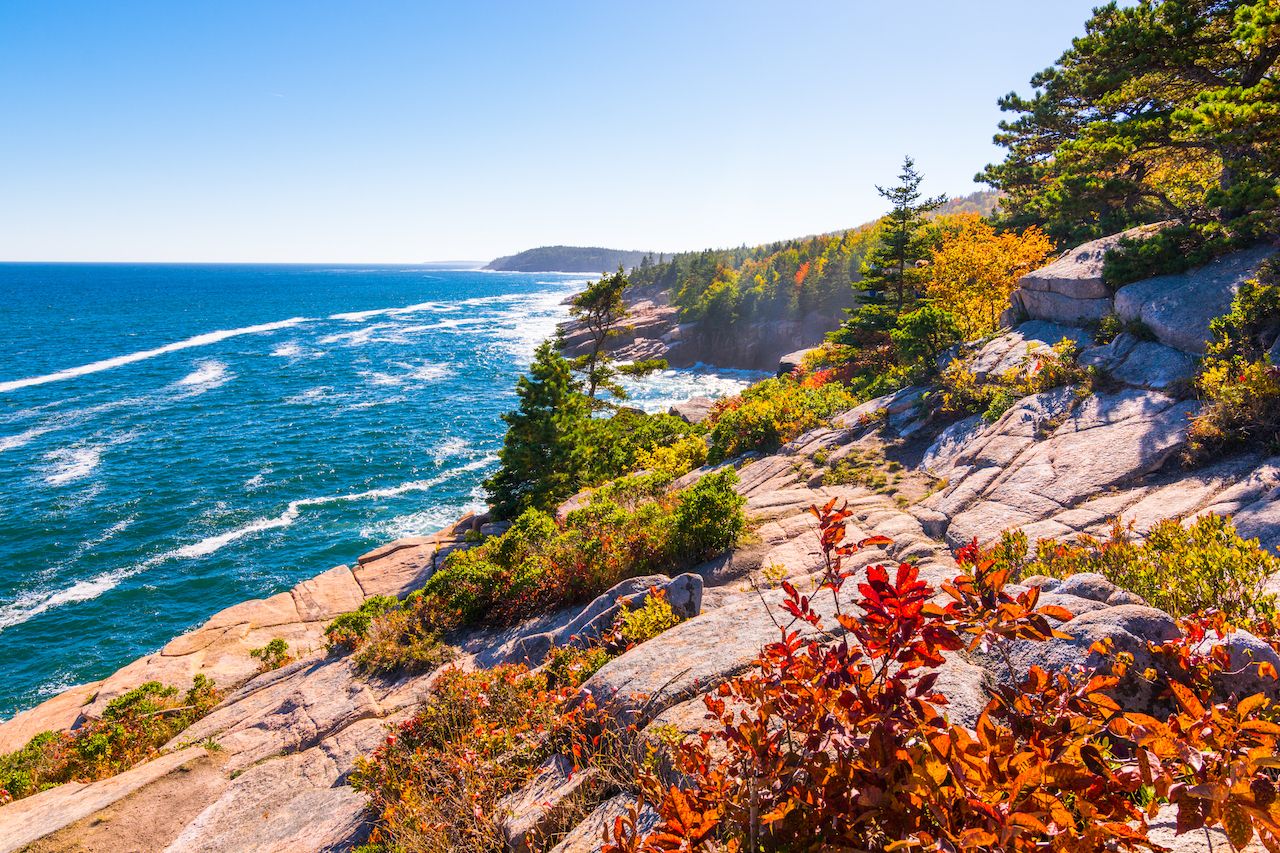 Unlike other New England islands, which are small, remote, and only accessible via ferry, Mt. Desert Island is Maine’s largest island, and you can actually drive to it. If you haven’t heard of the island, you’ve likely heard of its most popular attraction, Acadia National Park. New England’s only national park, Acadia spans 47,000 acres and is comprised mainly of woodland, rocky beaches, and granite mountains. In addition to the abundance of hiking and biking trails, there’s a ton of wildlife to be seen, including moose, bears, seabirds, and even whales.

The best way to get the full Acadia experience is by driving the 27-mile Park Loop Road, which connects Sand Beach, Thunder Hole, Otter Cliffs, Jordan Pond, and Cadillac Mountain. If you couldn’t tell by the names, Acadia makes it pretty easy to have a beach vacation and rugged hiking adventure all in the same trip.

If camping isn’t really your thing, and you prefer venturing into Acadia for just a day trip, Bar Harbor is the perfect place to use as a base. A small coastal community of just 5,400 people, Bar Harbor is the gateway to the park and the perfect place to relax after a day in the wilderness. The town may be small, but there are plenty of restaurants serving fresh seafood, like Galyn’s and Reading Room.

Getting there: Although connected to the mainland and hence reachable by car, Mt. Desert Island isn’t exactly a quick jaunt from a major city. It’s a three-hour drive from Portland, and just over an hour from Bangor. 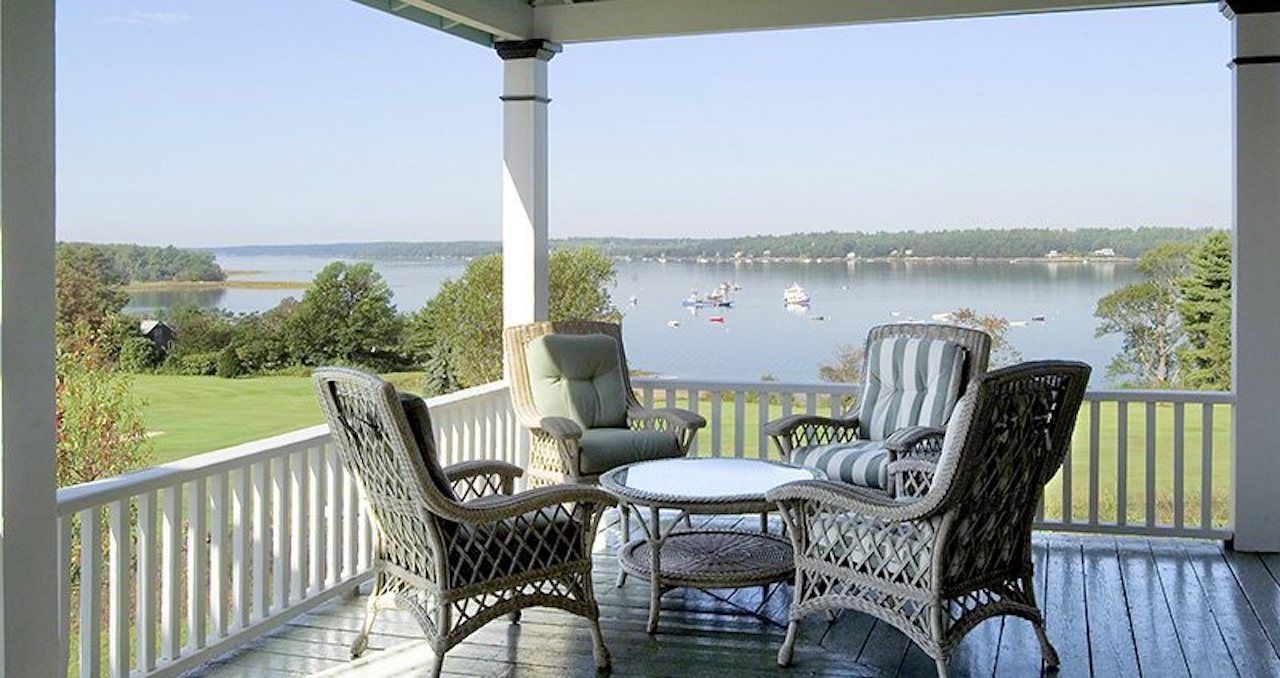 Just an hour’s ferry ride from Portland, Chebeague Island in Maine has something for everyone. Meaning “isle of many springs,” Chebeague is just five miles long and one-and-a-half miles wide, but it’s actually one of Maine’s most beautiful islands with a sophisticated infrastructure for accommodating visitors.

Beachgoers have no shortage of options, from the popular Hamilton Beach to the westward-facing Sunset Beach — which, you guessed it, is perfect for watching the sunset. In addition to offering great views, Sunset Beach is also the island’s most peaceful beach, located at the end of long dirt road. If you’re up for an adventure, you can walk to an even more secluded beach called Indian Point, only accessible at low tide by walking across the sandbar to Little Chebeague. This smaller island is no longer inhabited, but you’ll find the ruins of abandoned houses and some prime spots for camping.

Though relatively devoid of the crowds that plague many of New England’s more popular islands, Chebeague is by no means deserted. There’s one bar on the island called the Slow Bell, featuring live music, which is a popular gathering place for locals and tourists alike. And if you want the true island experience, spend the night at the Chebeague Island Inn. Situated on a hill with a great view over the ocean to the west, the inn is the perfect place to enjoy lunch, a cocktail on the porch, and watch the sunset. You can also play a round of golf at the adjoining golf club, if you’re so inclined.

Getting there: Casco Bay Lines operates four to six ferries a day from Portland to Chebeague, depending on the weekday and season. 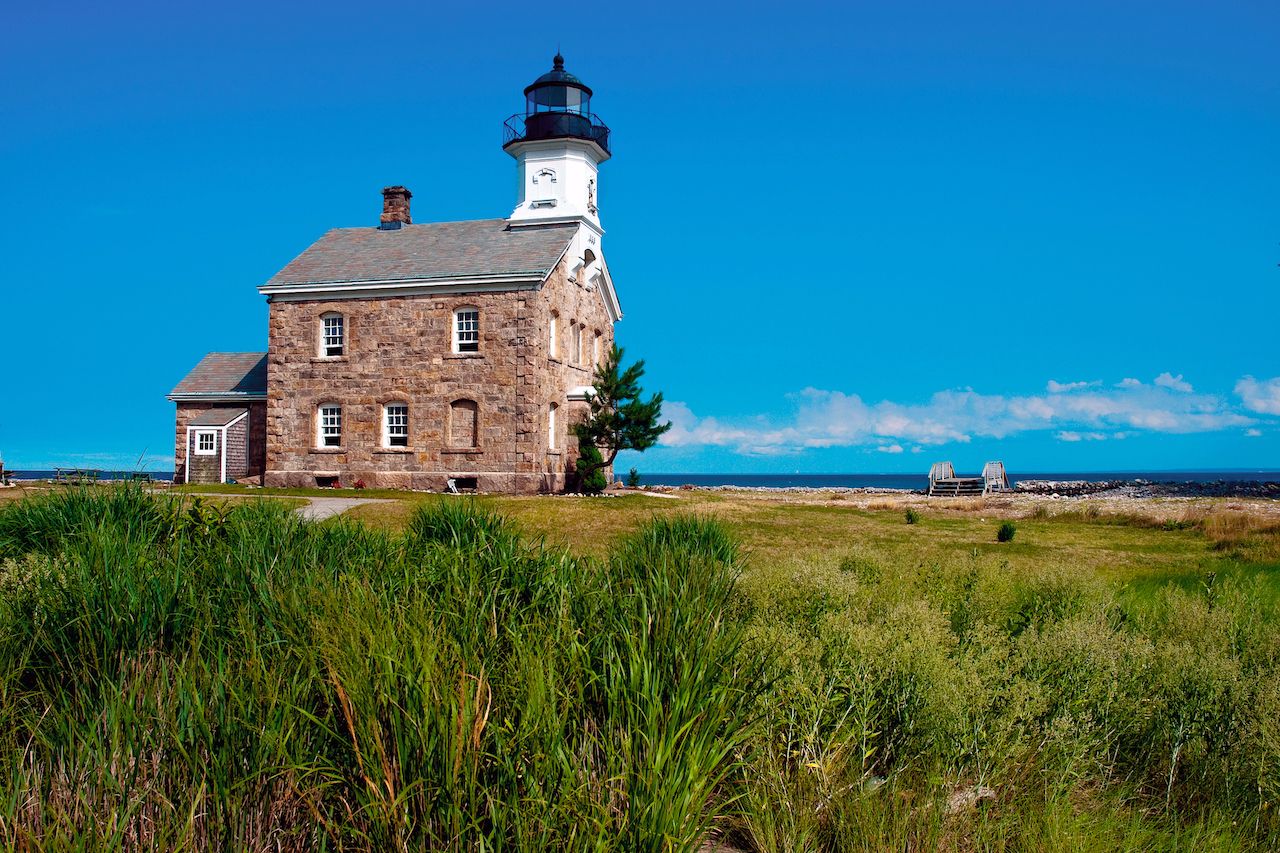 Maine may lay claim to most of New England’s island getaways, but don’t sleep on Connecticut. Sheffield Island, a short ferry ride from Norwalk Harbor, might be one of the most serene island escapes in the region. The island doesn’t have a vast national park, extensive systems hiking trails, or a bustling town, but it does have a lighthouse dating back to 1868.

The two-and-a-half-story, 10-room lighthouse is the island’s main attraction, with period furnishings and guided tours available throughout the day. In addition to this dose of classic New England history, a peaceful nature trail also runs through the Stewart B. McKinney Wildlife Refuge. Though relatively small in size, the refuge has birds, mammals, rare plants, historic buildings, and observation platforms.

You won’t be able to stay overnight on Sheffield Island, but that’s okay. The scenic ferry ride only takes 45 minutes, so it’s easy to base yourself in in the seaside town of Norwalk and make a few excursions to the island.

If you really want a rugged island experience, however, head to nearby 45-acre Shea Island. If you have a permit, you can camp overnight at one of the16 campsites, which are equipped with solar-powered bathrooms. It’s more difficult to do, but the extra effort will only make your appreciate the island’s peace and quiet even more.

Getting there: On weekends, three ferries per day depart from Norwalk to Sheffield Island, arriving in 45 minutes. As for Shea Island, the ferry doesn’t go there, so you’ll have to take a private boat.

When you think of the classic New England island escape, you’re probably imagining a paradise far from busy city streets. Indeed, it can be easy to forget that there are actually several islands right off the coast of Boston, many of which are great options for either a quick day trip or weekend getaway.

Part of the Boston Harbor Islands, the 54-acre Grape Island has woodland hiking trails, beaches, and places to camp. It’s also replete with history, being the site of several small battles between colonists and British forces during the Revolutionary War. The island’s name is actually derived from the “Grape Island Alarm,” a Revolutionary War skirmish.

Now, the island is the perfect place for seaside walks, picnics, kayaking, and bird watching. There are no hotels on the island, but there are plenty of campsites accessed by wooded trails, and you can always stay in Boston just a short ferry ride away.

Getting there: Take the ferry from Boston Harbor or Hingham to Georges Island and then from there to Grape Island. The whole trip should take just under two hours.